When you take a chance and the stars align, magic happens. Just ask florist Lucy Houghton of Lu Diamond Flowers and interior/product designer Sally McDonald of The Arc Dept. This time last year, they didn’t know each other; now they share a studio on one of Ngāmotu/New Plymouth’s main streets.
The pair opened their doors in October to provide a place where people can purchase Lucy’s fresh flowers and Sally’s handles and homeware, while they create in the workshop at the rear. “Out the back is where the action is and I do my resin work, which is great because we don’t have to be precious about making a mess,” says Sally. 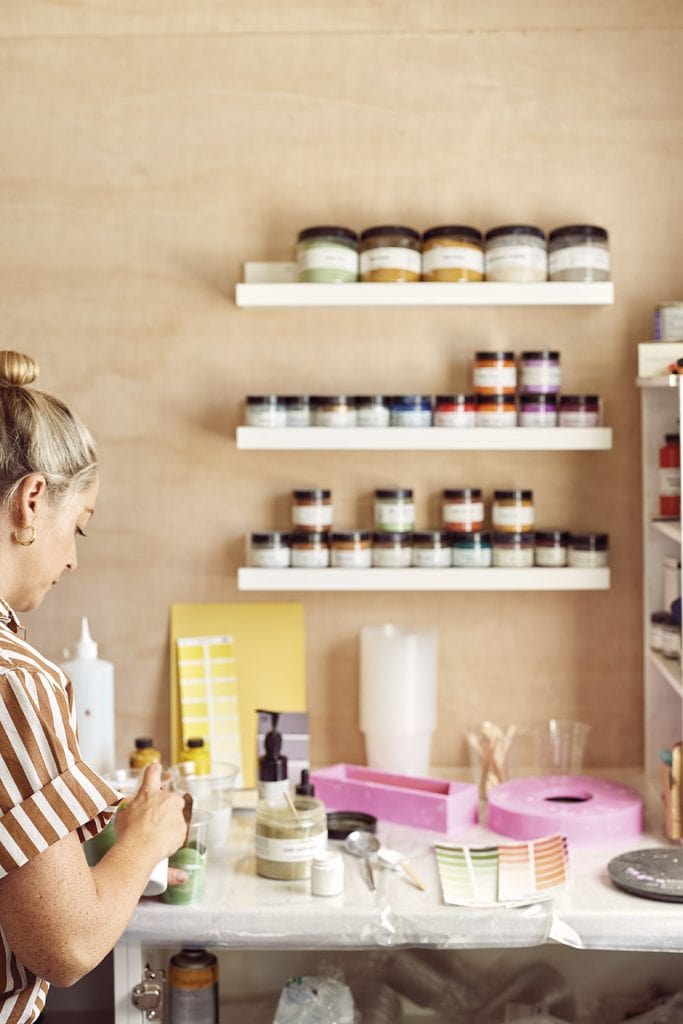 This new set-up is a far cry from WFH, which both women had become accustomed to while juggling life as working parents. They were ready for a change — plus Lucy had some resin vases for her floral arrangements in mind. Enter Sally, who’s gained a reputation for her resin creations.
“I knew nothing about resin, but I was keen to make some vases,” says Lucy. “A friend told me about an amazing woman in New Plymouth who makes resin furniture, so I started following her on social media. Sally posted on Instagram that she was looking for someone to share a studio with, and after meeting her in person, my interest shifted from solely creating vases to also creating a spot with her. A month after we started to chat, we signed a lease.” 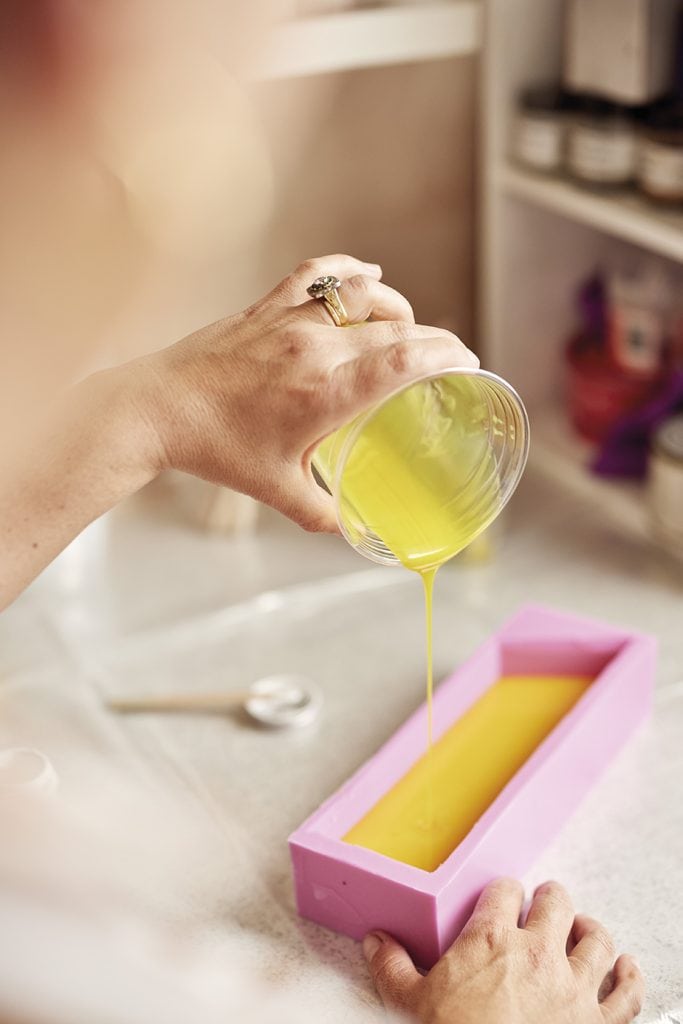 The pair’s shared space is the ground floor of a 1900s villa on St Aubyn Street. Originally a flower shop, it had evolved into a clothing store before becoming vacant. When Sally and Lucy discovered it, it was dark and dingy, with a lime green exterior and big black boards covering its angled front window.
“The building didn’t have much street appeal, but we thought that with some TLC it could be cool,” says Lucy. “We were told that 20 years ago, it was occupied by a successful florist, and I liked the idea of being handed the baton.”
That memory lingers in the community, so it’s nice for everyone to see it revived. “We get a lot of former customers coming by who used to buy flowers here,” says Sally. 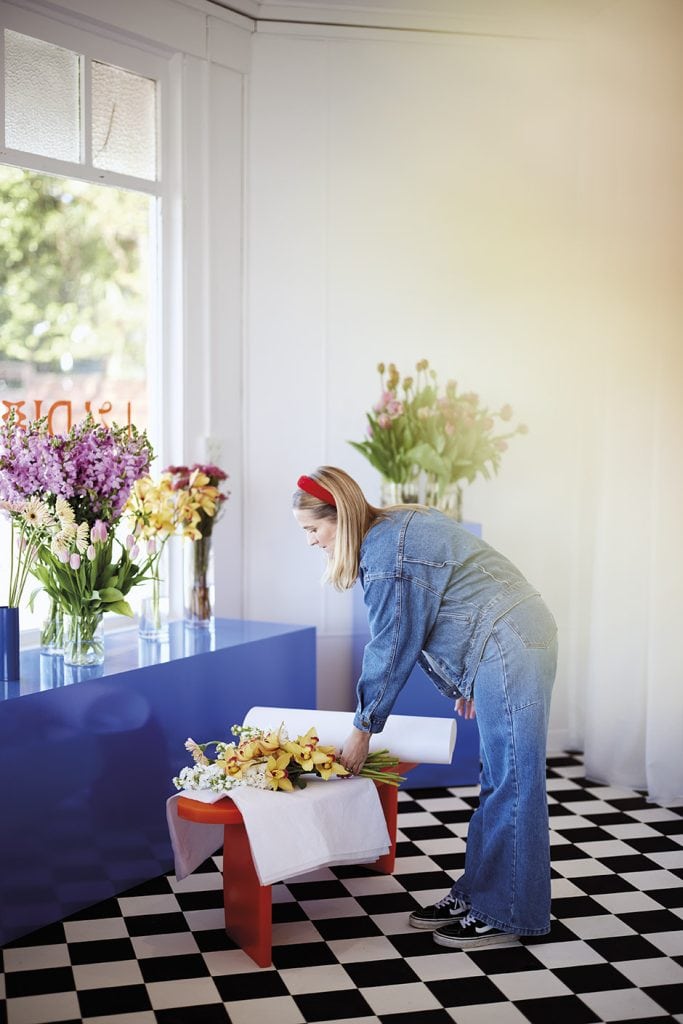 Inspiration for the studio evolved as the pair shared their ideas. “It became clear we were on the same page from the get-go,” says Lucy. “The ideas came together organically — it was super easy. We both knew we wanted a resin table, which was the most expensive part, but it makes the space.”
The upshot is a pale interior painted in Resene Half Black White, anchored by black-and-white chequered vinyl. “We wanted a bit of excitement,” says Sally of the bold flooring. “We’d seen it done previously and both loved it.” The large pink table, an orange resin stool and some blue plinths provide pops of colour, while a sheer, white curtain softens the look. 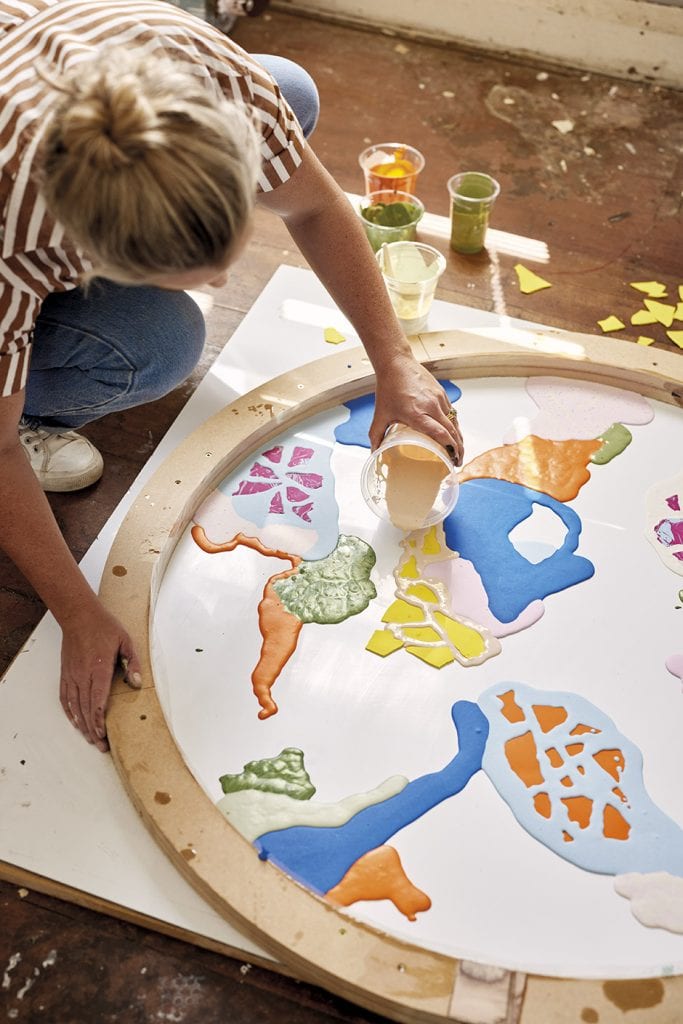 Given both Lucy and Sally were poised to take their creativity to the next level, their collaboration couldn’t have come at a better time. “We’re in the same place with our small businesses,” says Lucy. “We’ve each got enough going on that we’re busy and not in each other’s faces; we’re in the studio together three days a week, and each have one day here alone. Our brands are different but sit beside each other nicely. We’re both mums and passionate about what we create — and Sally’s good company too!”
“I’ve been working from home for the past few years, so it’s really nice to have someone there,” agrees Sally. “When Lucy’s not here, I miss our banter.” 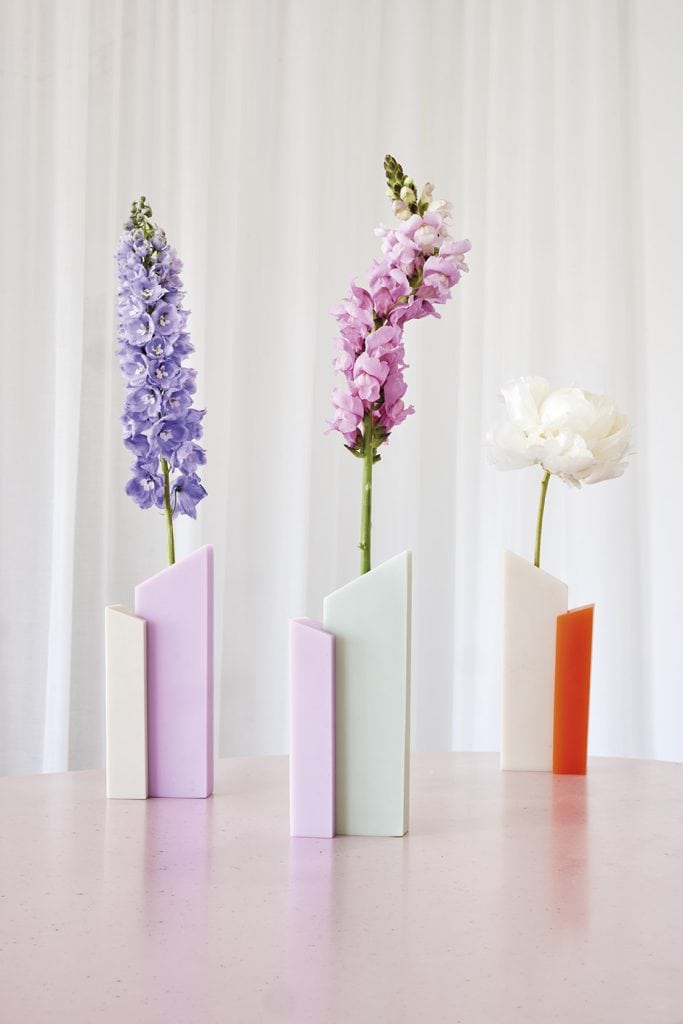 With Lucy also running showroom/café Bleached Coffee & Company with her partner Benny Connolly (director of surf-brand management business Hippie Slang Industries), between them, these women are well connected to the city’s creative community. “There are a lot of talented people here, a real mix of people doing things in a broad range of mediums,” says Lucy. Passionate about photography as well as flowers, she’s set her sights set on producing a book. Some of her imagery (made in collaboration with photographer Cam Neate) can be seen on the wall behind her in the shots at the top of this web page.
Meanwhile, Sally’s love of resin was inspired by the material’s depth and multi-dimensional nature. “I slowly got into working with it, making door hardware, then my business grew, with designers asking for tables and bigger items,” she says. One of her recent projects involved making resin pieces for a fit-out by Material Creative, which is also profiled in our February/March issue.
Despite Lucy and Sally’s individual interests, it’s now their shared space that grounds their creativity and has seen them combine their talents on a collection of resin vases called Spliced — the embodiment of Lucy’s earlier vision. They also hold workshops together. “I want to try to do one a month,” says Sally. “It’s such a beautiful space in which to display our work and share our inspiration.”
;