Although a causal link between a ’90s Smashing Pumpkins concert and the award-winning renovation of this heritage home can’t definitively be made, neither can its influence be ruled out. A getting-to-know-you phase usually comes first in any client-architect relationship, but when collaborating on the update of this circa-1906 villa in Tāmaki Makaurau/Auckland’s Herne Bay, Bureaux’s Maggie Carroll was able to skip all that. Maggie reckons she and her client Tim have known of each other since she was about 14, thanks to him being mates with her family friends’ sons and her latterly working on properties for his parents. Including that night at the gig they both attended, he was always in the background, and then one day… 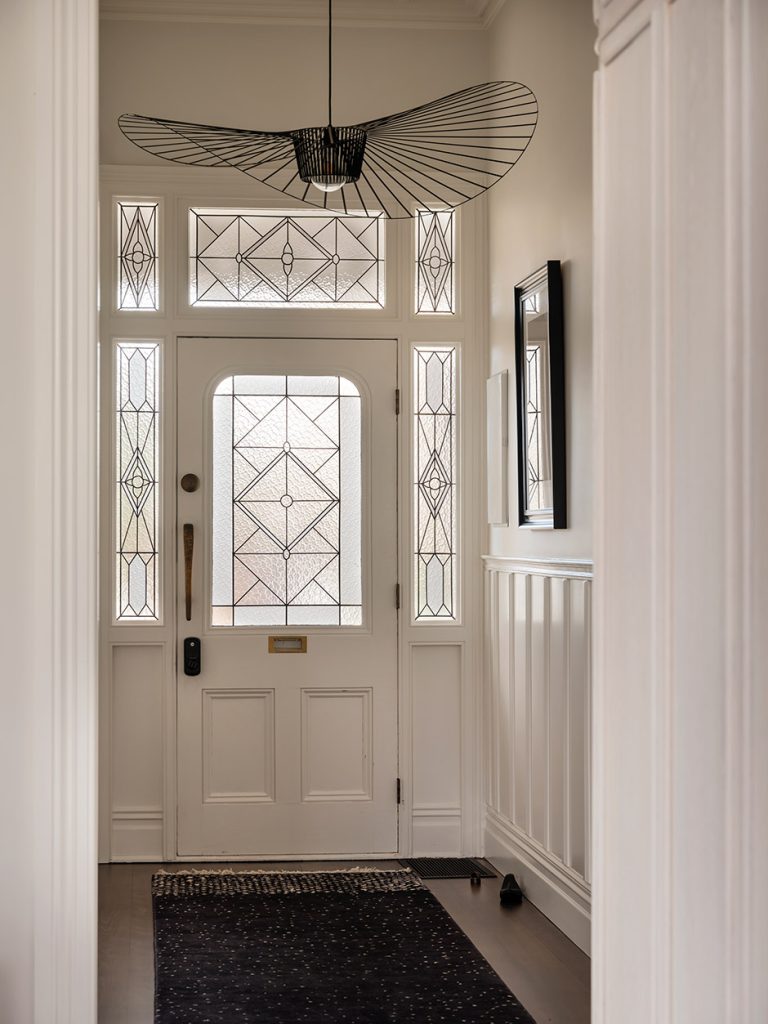 “Tim called me almost as soon as he bought this house and said it’d always been a dream of his to work with Bureaux, and asked if he could book us in,” says Maggie.
With the pair’s long-term connection ensuring a certain shorthand and level of trust, all that was left to do was welcome Tim’s wife Paige into the fold as an equal part of the process. The couple had bought their home knowing it needed a bit of a facelift, and the shared-history shortcut saw Maggie and her Bureaux team respond to their brief for a larger dwelling for them and their two-year-old son with ‘wow’ quick smart. But when their initial plans for expansion were scuppered by the council due to heritage constraints, they were forced back to the drawing board. 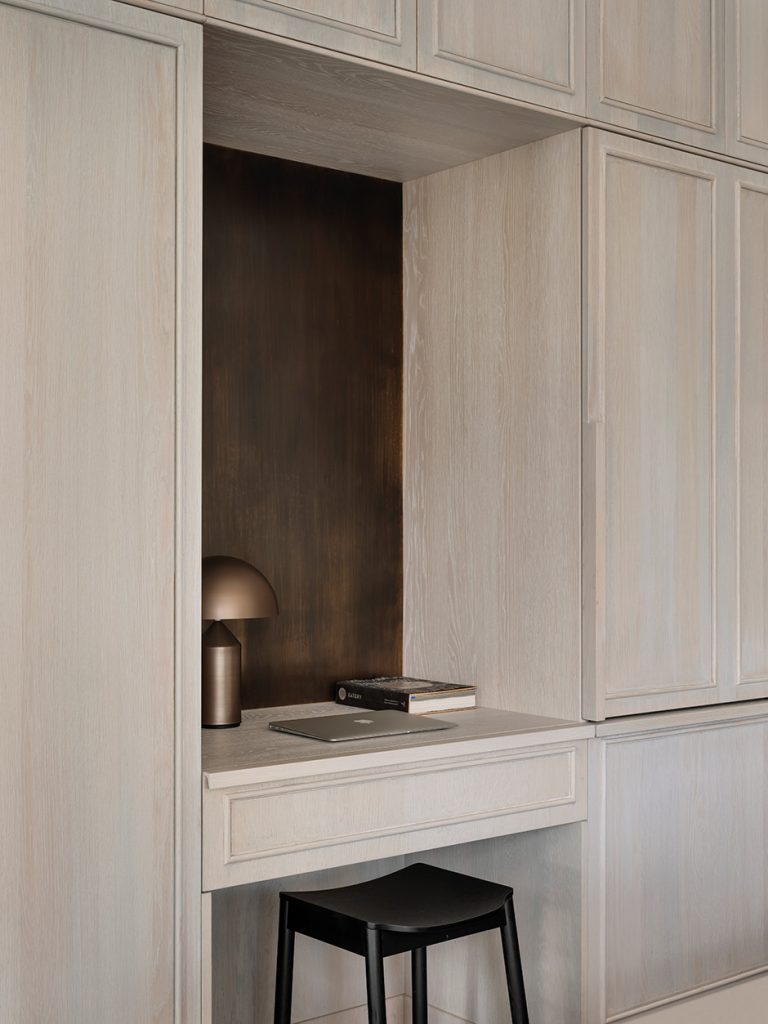 In what was ultimately a fortuitous twist, they began dreaming smaller. Out went the proposed second-storey addition and other enlarging elements, and in came something even more special. Rather than focusing on going up and out, they turned their attention inwards, to creating the most exceptional spaces possible within the villa’s existing footprint. 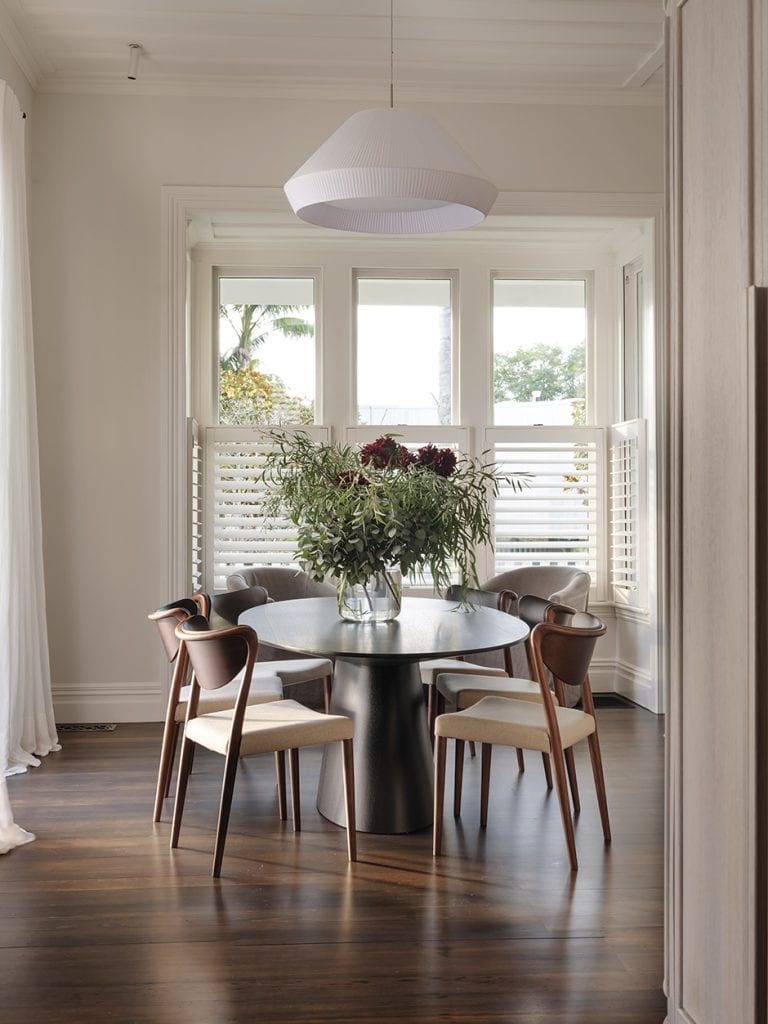 Starting from scratch to reorganise the rooms, the team (with Alistair Raw of Raw Landscape & Build) gutted the interior. Their design moved most of the typical central hallway to open up the living areas, and refitted the three bedrooms and two bathrooms to support them. The handsome, curved bank of cabinetry that now leads you into the living zones came from altering the size of the bedrooms and position of the main bathroom, while softening the transition into the kitchen and carving out a spot in the living space in which to display Tim and Paige’s collection of precious objects as a vitrine would. 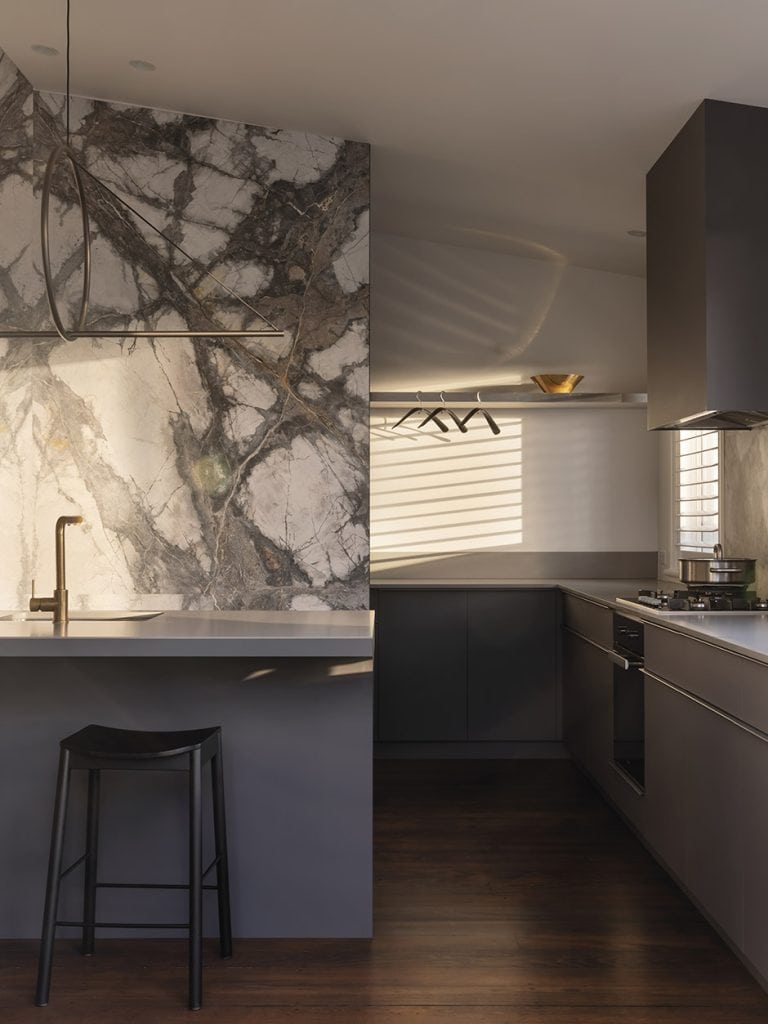 Another key design move avoided the standard villa experience of glimpsing into the private spaces when proceeding down the hallway by creating discreet access points into the three bedrooms. Now as you enter the house through the original leadlight door, there’s a short corridor retaining the character detail that then becomes a lobby from which two bedrooms and the main bathroom are accessed, concealed by a cavity slider to form a suite-like sanctuary. 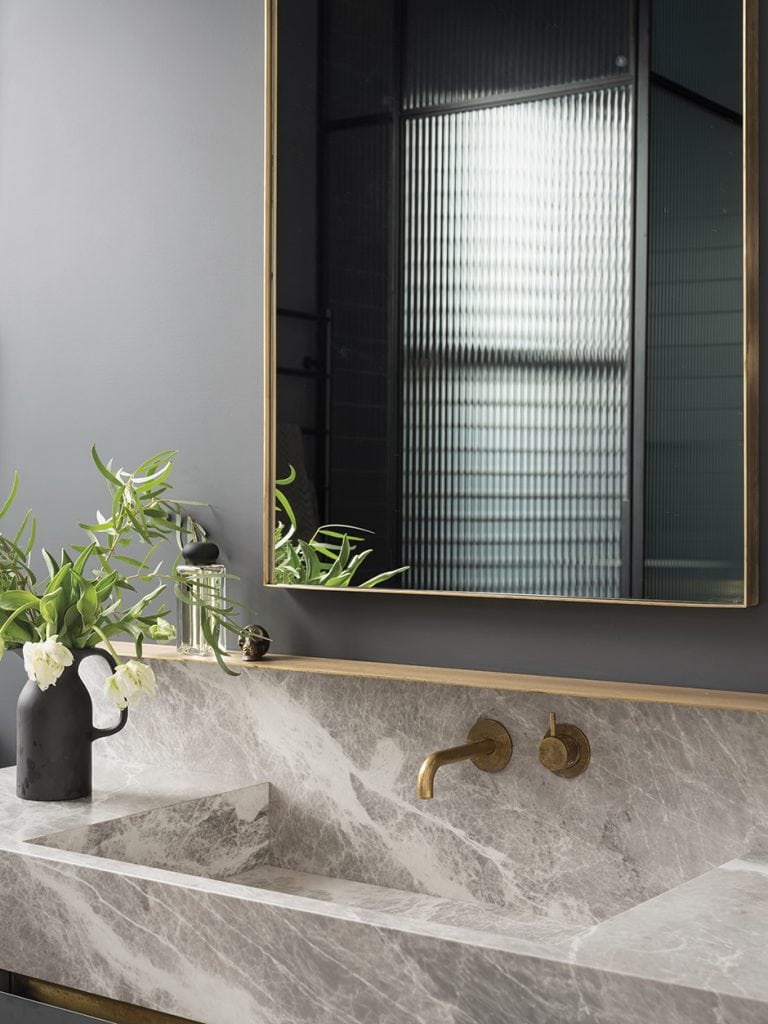 Meanwhile, secluded entry to the couple’s sleep space was established beside the living room fireplace where shelving once stood, giving Tim and Paige a lovely slip-away moment without compromising the size of their room. Continue down the hallway, past that tall, curved cabinetry and bam! You’re met with a breathtaking full-height wall of marble, another trick that added both form and function — this time to the kitchen, with a scullery tucked around one side of the slab and the laundry on the other. 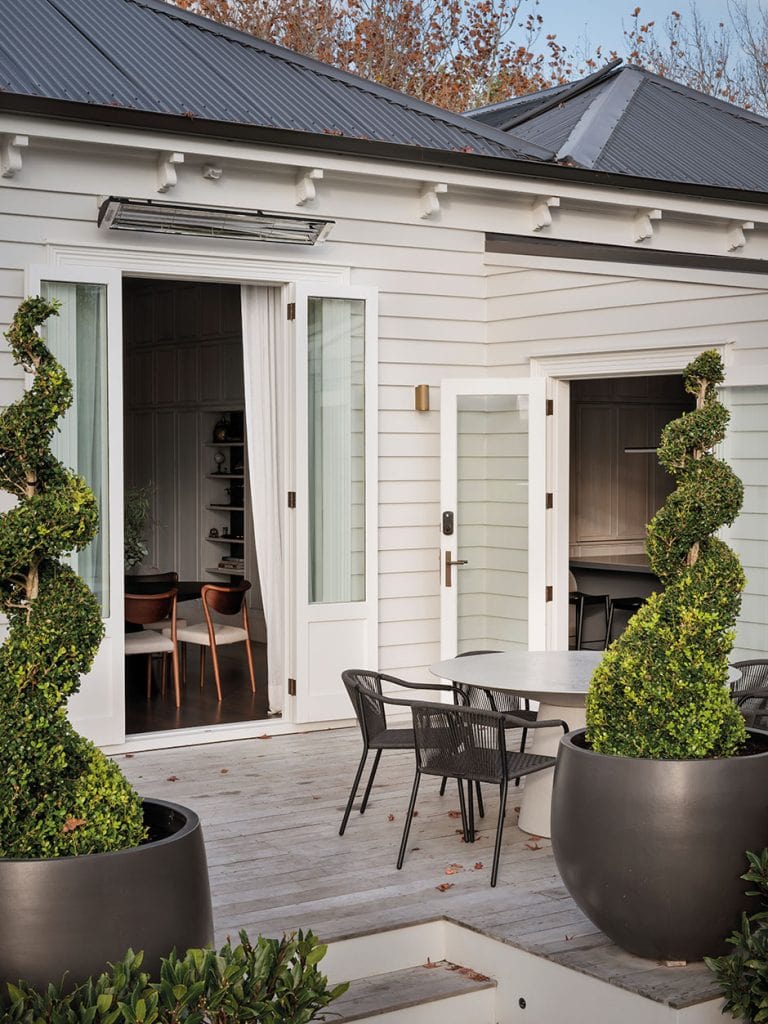 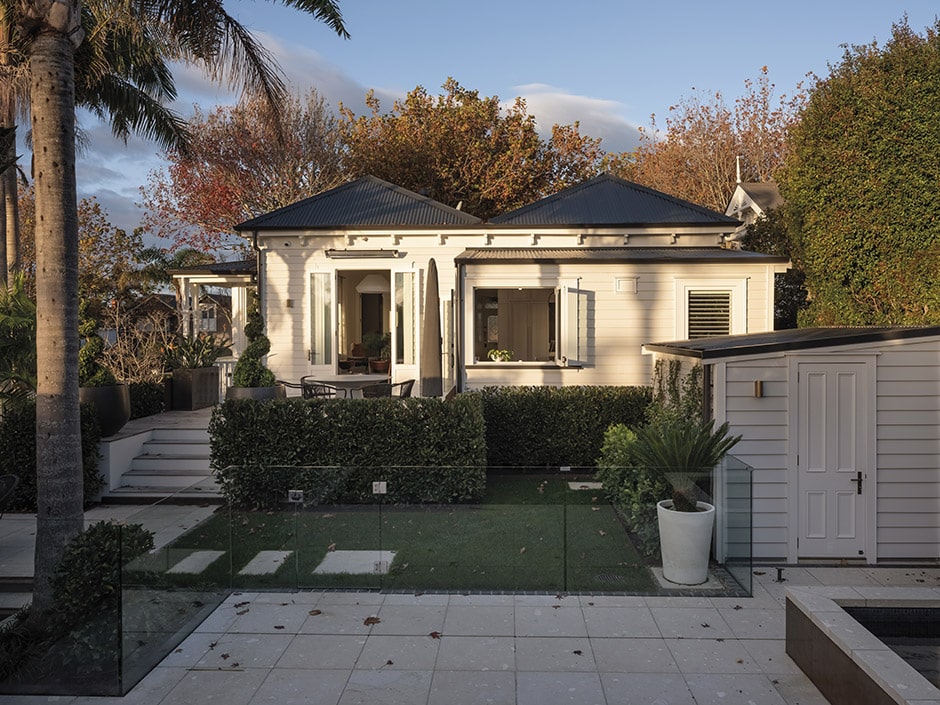 Achieving the project’s aim to maximise the luxury in the house meant every surface was re-crafted in some way, and furniture and objects brought in where necessary. The concept of the house as a jewel box became a theme with regards to colour (tonal, softened, warming neutrals that instill a sense of calm), texture (a material palette favouring stone, timber and brass) and detail (lots of it in a relatively small home).

If the average villa alteration adds an extension on the back, what this project proves is you can make bolder yet era-appropriate moves without feeling compromised by a lack of scale. “Something I’m proud of is how the reinvention of spaces has improved how our clients live,” says Maggie. “I’m really motivated now to work within smaller footprints and make them the most effective they can be. It’s not necessarily the best thing to go big — you just need to be clever, and if you can add more than one function to each room without compromising, I think it works even better.”
For their efforts, the Bureaux team were rewarded with the presentation of a Gold Pin in the Residential Interior Architecture category of the Designers Institute of New Zealand’s 2021 Best Design Awards, but the real triumph occurred closer to home. Tim and Paige confided in Maggie that they’d toyed with the idea of moving house with their growing family, before realising they loved where they are too much to leave so soon. That was music to Maggie’s ears. “I think it’s a great success story,” she says.