At Home with Tania Handelsmann

Tania immediately recognised the potential in her own home when she purchased it eight years ago. “When I came across this house I was immediately won over by its Regency period detailing – the dentil cornices and exterior frieze, the columns on the front porch and the handsome simplicity of the internal windows with no architraves,” Tania recalls. When she finally undertook the six-month renovation in 2021, she not only had a clear vision, but she’d also collected many of the pieces that now take pride of place in the reimagined interior.

A , artwork by , and a 1930s Murano sconce make a charming vignette in the entrance hall.

Located in , the house is one of a pair of 1850s Regency-style terraces that were originally one freestanding home. “It was built before many of the surrounding Victorian terraces, which is why the architectural style is not typical of this neighbourhood,” Tania explains who lives there with her husband Andrew, children Oscar and Harper and Russian Blue cat Babushka.

Not one to do things by halves, Tania ensured the renovation involved gutting the entire house and demolishing and rebuilding the rear half – a rabbit warren of tacked-on rooms. “The ground floor layout was replanned to optimise the spaces through generously scaled rooms that flow easily from one to the other,” Tania says. On the first floor, the designer ingeniously added bay windows to make the small rear bedroom and bathroom more functional, while working within the strict Paddington conservation zone. After deliberating, an attic room was also added creating a much-needed home office.

A view over the custom sofa into the main living area where , an and a are artfully combined. The picture is complete with a and a .

In the dining room is a custom table by Chatsworth Fine Furniture surrounded by 1930s vintage French Guillerme et Chambron chairs. purchased from the collection of YSL and Pierre Berge make a statement in the space. The artwork is by . To the right, the living room joinery by Silhouette combines carefully curated vintage candlesticks and vessels.

It is the handpicked finishes that really make the spaces sing. “I was careful to select finishes with patina, warmth and texture,” Tania says, adding “one of the more dramatic changes was the plaster wall finish used throughout the front two rooms, imbuing those spaces with a real sense of atmosphere that didn’t exist before.” Newly installed narrow solid oak floorboards with distressed edges emulate what might have been originally there. are dotted throughout, with Viola in the kitchen, Paonazzo in the ensuite and Amarillo in the main bathroom. “The stone slabs were selected and reserved years ago!” Tania laughs.

The furniture is equally individual; “I had a very clear idea from the beginning of what I planned to do with the house so enjoyed slowly collecting vintage pieces that would work in the spaces as I envisaged them,” the designer explains. Highlights include the Guillerme and Chambron French oak cabinet from the 1950s, the 17th-century kitchen table and entry console and a pair of brass wall sconces acquired from the estate of Yves Saint Laurent and Pierre Berge. Custom-designed pieces such as the dining table and blood-red velvet sofa complete the picture.

The new kitchen is centred around a . skirtings continue into the family room beyond, where a French Guillerme et Chambron cabinet is juxtaposed with Mientje vases by Atelier MVM. 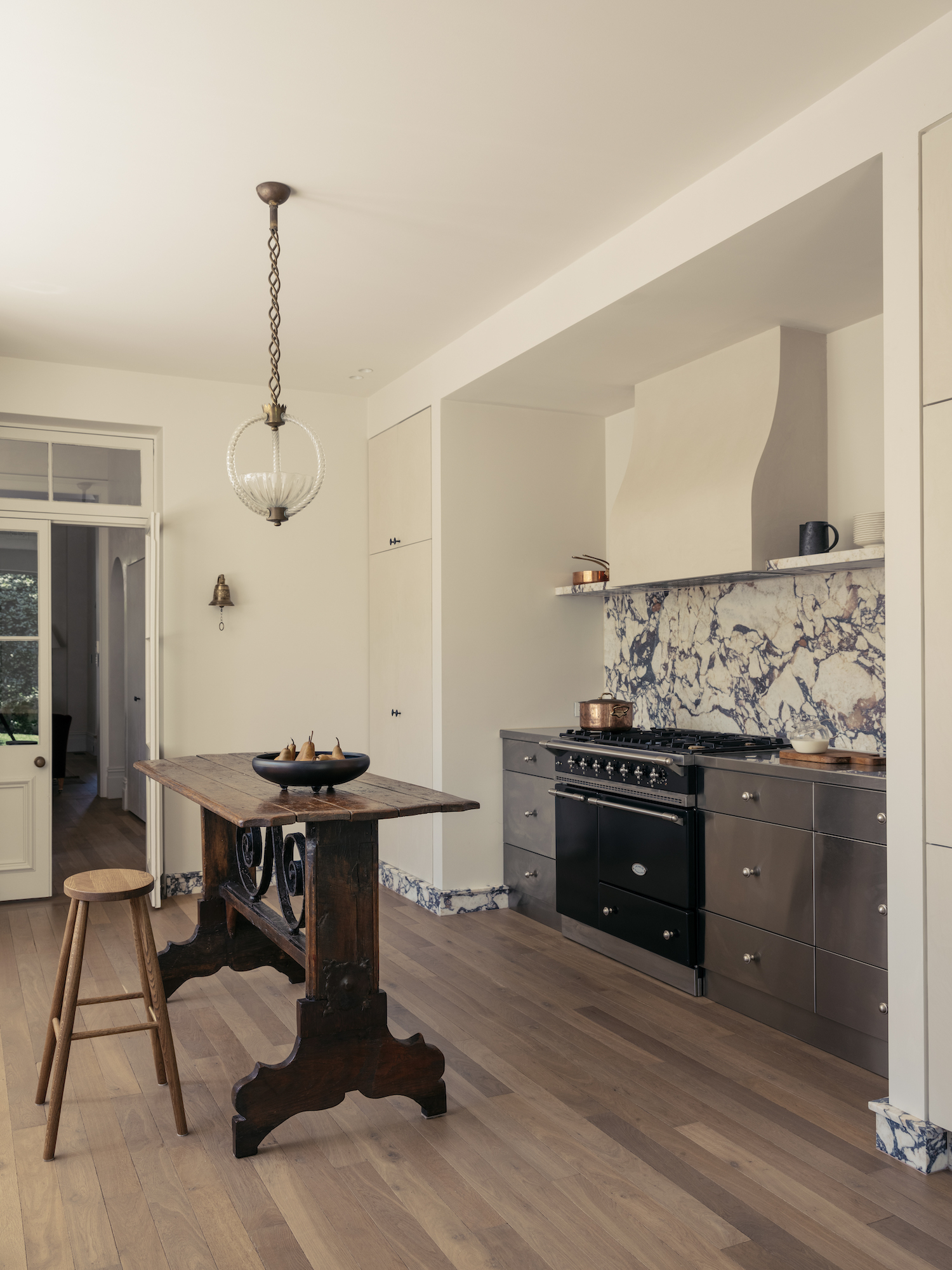 The kitchen is equipped with a , and units by Silhouette Kitchens. A bell passed down from Tania’s mother and restored by Noble Elements has pride of place on the wall. 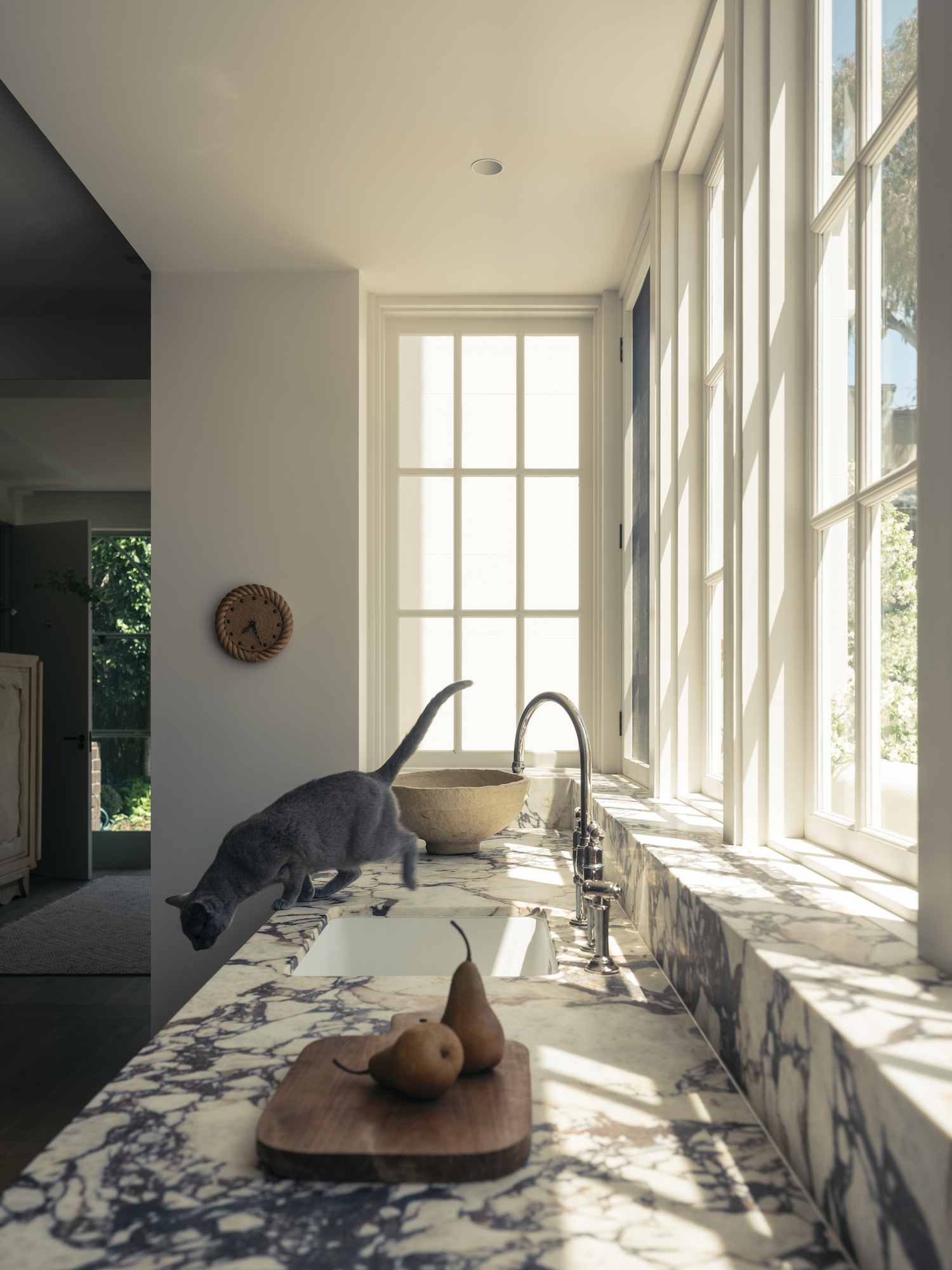 Babushka jumps from the Viola benchtop in the kitchen. A hangs on the wall behind, and in the foreground is and a Franke Fragranite under-mount sink. 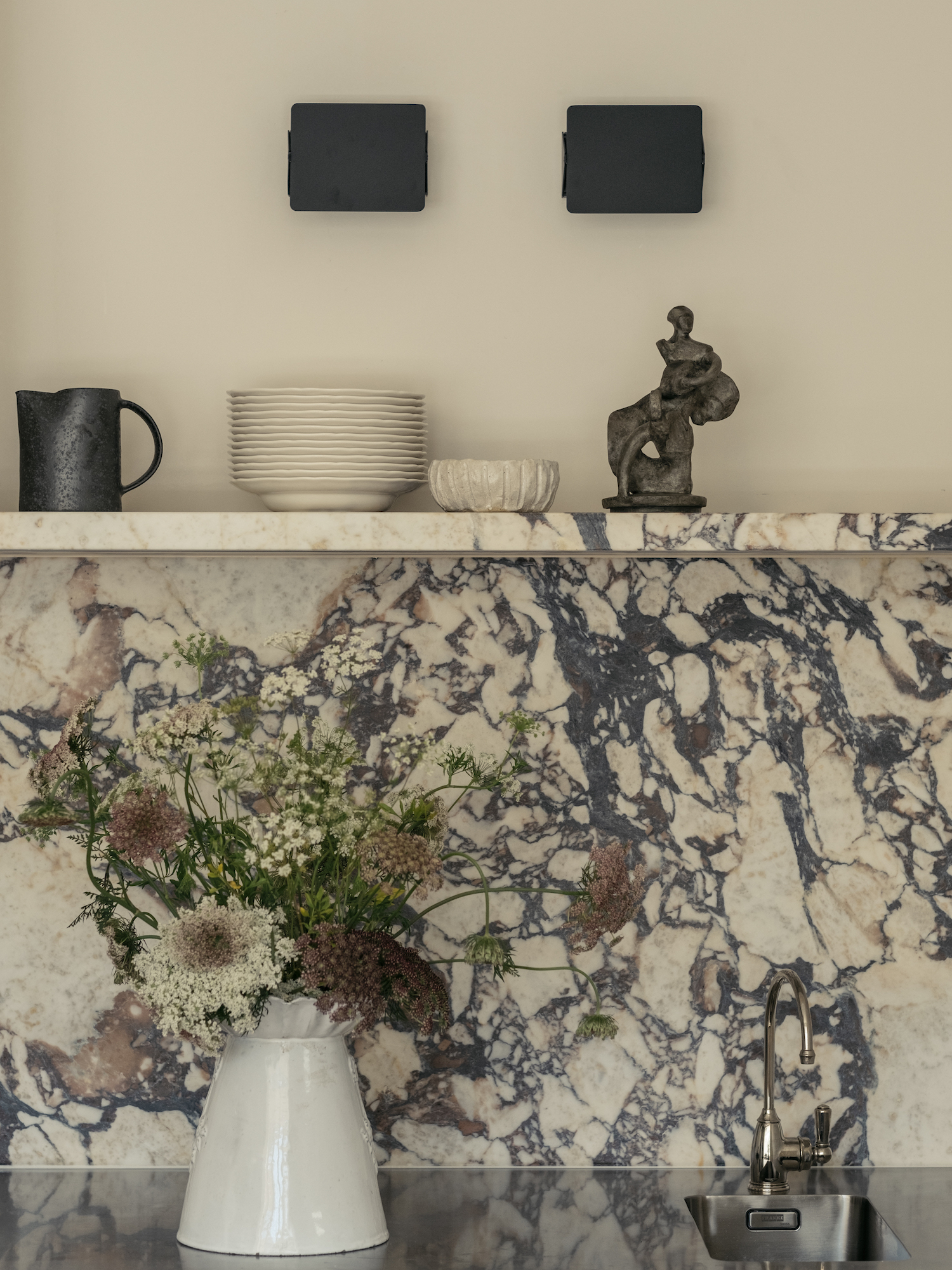 A view out past the custom steel doors by Ganci Steel doors of children Oscar and Harper playing in the garden.

Having woven her magic, the house is now the perfect balance of artful spatial planning and a carefully executed, yet seemingly effortless atmosphere. “Aesthetically, I finally feel like I live in a home that is a true reflection of my personal style and practically, the quality of the spaces makes my family feel more comfortable, organised and productive,” Tania says. From the pretty vignette at the entry through to the floral upholstered inbuilt seating at the back, it is the embodiment of style and substance.

“I had a very clear idea from the beginning of what I planned to do with the house so enjoyed slowly collecting vintage pieces that would work in the spaces as I envisaged them.”

The main bedroom is dreamy and white with a custom bedhead in Lelievre Lama boucle by Ambient Upholstery, and Velvet Valley Baltic linen bedcover. punctuate the walls. 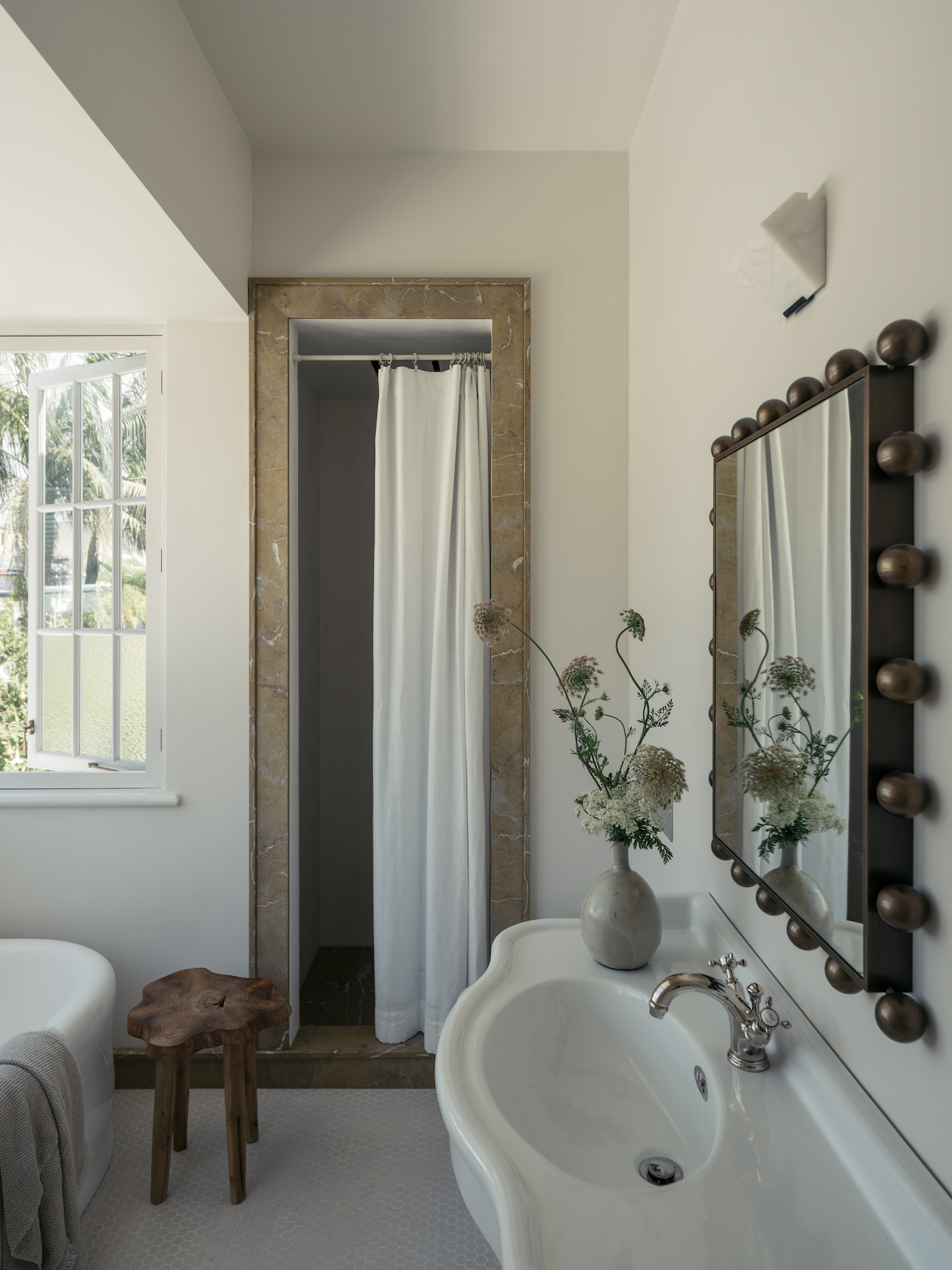 Including a bay window in the main bathroom allowed for the
Soho bath. Natural elements like the stool and Amarello stone bring warmth to the
now light-filled space. 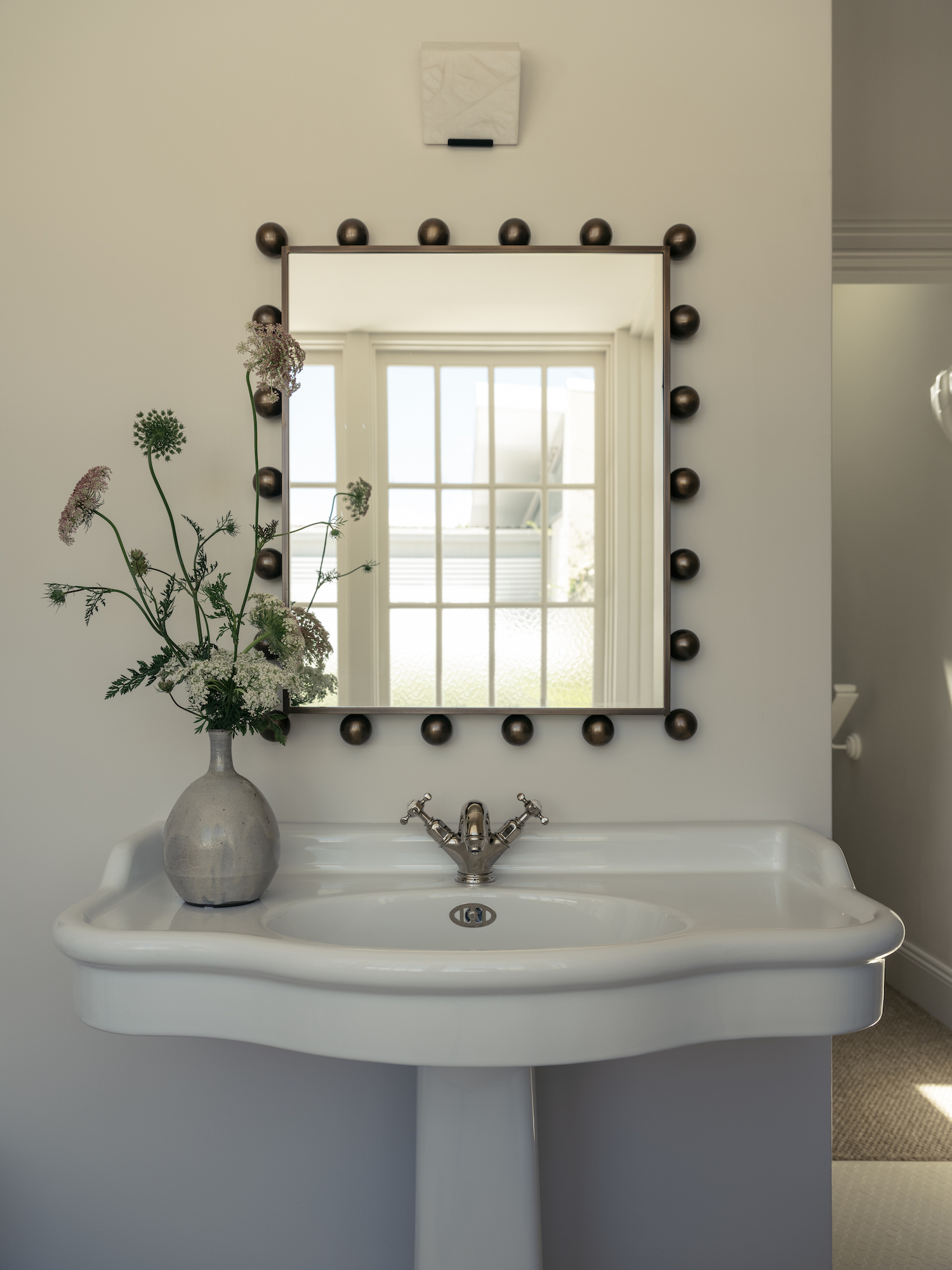 In the main bathroom, and the are complemented by decorative flourishes such as the Sophie Davies mirror.

An hangs above a solid Statuario marble moulded basin in the powder room. The micro-cement finish on walls and create a visual link to the rest of the house. The powder room also features the and Cultiver hand towel.