Macintosh Harris’s Piha House has grandstand views front and back

A lunch invitation to Geoff and Rose Creighton’s beach house is a hot ticket, well worth the drive out to Piha. Fishmonger Geoff has access to the freshest kaimoana around, and is known for throwing the odd crayfish on the barbie. He also whips up a mean whitebait fritter. The secret to a good fritter is not to over-egg it, he says. “I use only the egg whites — otherwise it’s an omelette.” The secret to a good holiday house is along the same lines: keep it low-key, with more of the essence and fewer trappings. 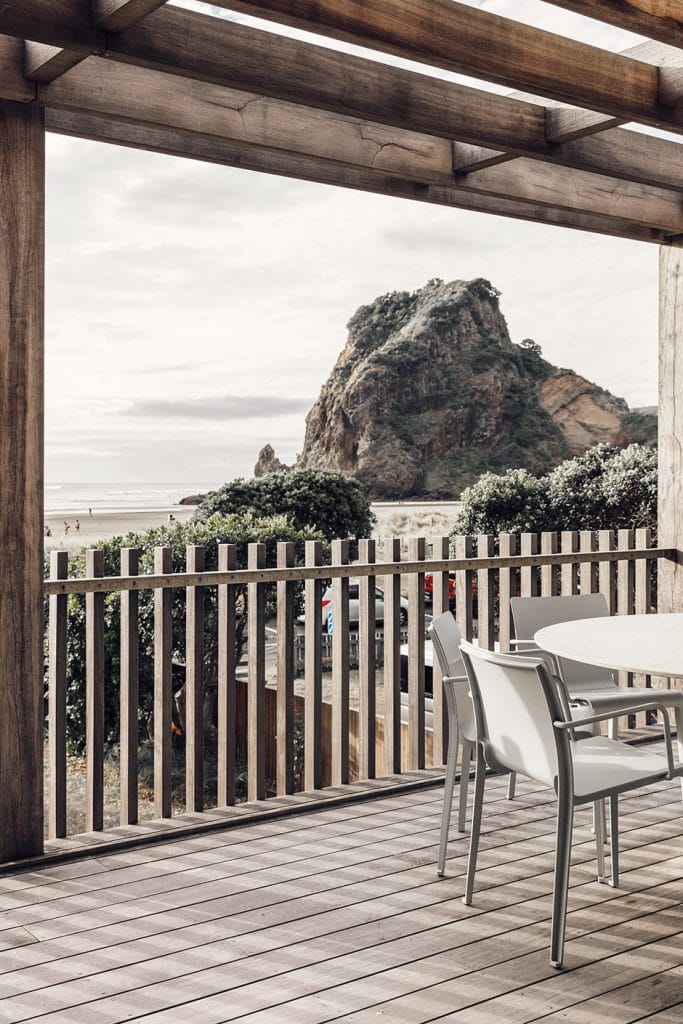 Memories of wave skiing in the punchy surf in the ’80s flooded back when, 11 years ago, the couple swapped allegiance from Tāmaki Makaurau/Auckland’s east coast to the west, and came to look at a property for sale that had “winked at them” on Trade Me. “There’s a comforting sameness to Piha; it doesn’t change from one decade to the next,” says Geoff.
Won over by its waterfront location in this tightly held corner at the southern end of the beach, the couple bought the 1960s concrete dwelling and slowly but surely began to find its foibles. With only retrofitted insulation, it wasn’t the warmest house on the block and although gazing at the sea and sand from the front deck had its merits, the prevailing southwester often made that a windblown trial. Creating useable space in the sheltered area out the back of the property, facing the native bush, would double the holiday fun. All things considered, it wasn’t as easy as tacking on a deck. They decided to start afresh.

Having previously built on Waiheke Island with designers Paul (Macca) and Mandy Macintosh of Macintosh Harris, they knew who to turn to. “In our previous house, we had quite specific input but found when living there that some of the things we wanted provided limitations,” recalls Geoff. This time, they gave a very brief brief: bulletproof materials and a room that would open up to the bush-painted hill to the east. 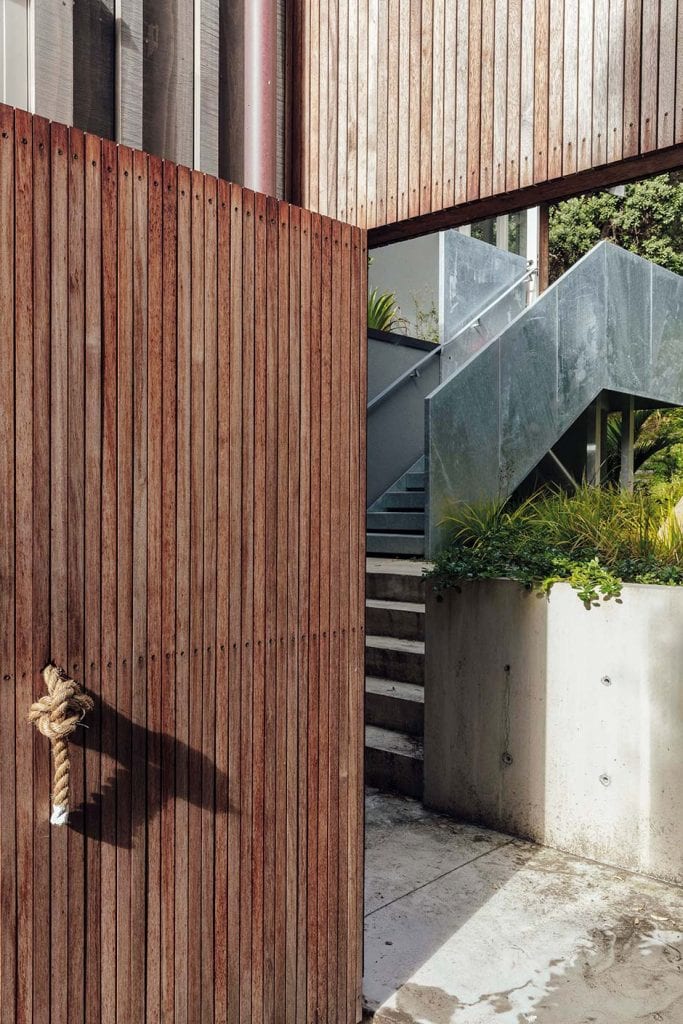 As to the style of the house, they had faith. The inimitable Macca aesthetic suited them just fine. Pushed to define what that is, Paul is reticent. He doesn’t wish to be maligned with a label, but will throw out cues such as “gables”, “open ceilings” and “texture”. It pays not to “get sucked into a trend that passes in five minutes” is his thinking.
That philosophy is followed so well in this spot that those who pass by the house for the first time would swear it had been here for decades. The double-storey, four-bedroom home occupies the footprint of the original bach, blending into the treescape of the pōhutukawa-lined cliff. Silvery board-and-batten cladding and dark- coloured tray-profile roofing see to that. 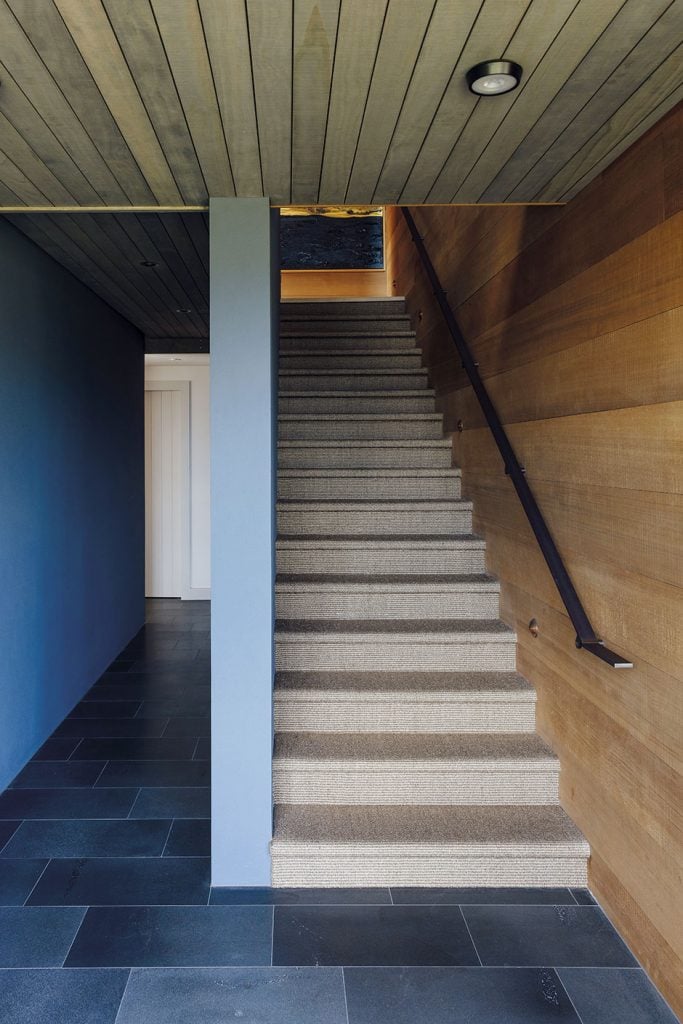 Yet there’s more to this ‘less’ than meets the eye. The exterior skin, made of high-performance Accoya wood (pine that’s been treated so it doesn’t rot), was band-sawn to roughen it up a little and stained the grey tone it’d ultimately have reached in a few years’ time. It has the effect of turning the clock forward. “The house becomes a bit of driftwood on the beach,” says Mandy. 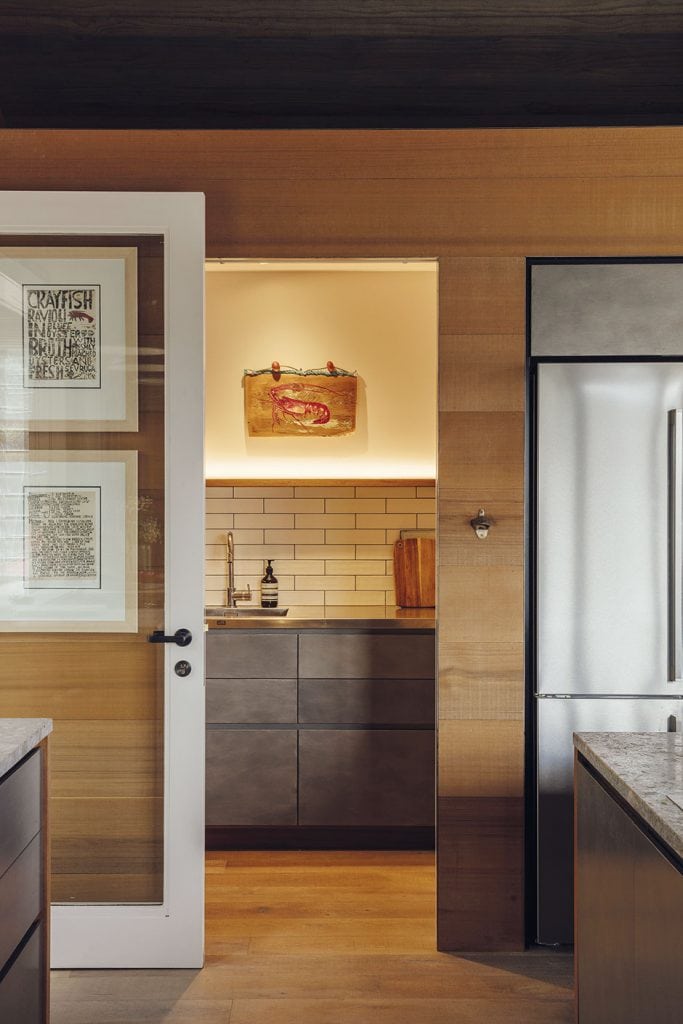 Using wood to full effect is a trademark move, and this gabled dwelling next to the ocean is no exception. The programme is fairly simple: upstairs, the main branch of the L-shaped plan runs roughly east to west and contains the interconnected living zones, while the master suite occupies the shorter arm on a north-south axis. Downstairs, there are more bedrooms and a garage.
A set of iron gates to the side of the home signals the entrance gallery before Anna Stitchbury’s Golden Journey beckons up a flight of stairs. Inside, the first impression is not the light, bright hit of sea and sky one might expect, but a more subdued — warmer — welcome courtesy of a tapestry of timbers. 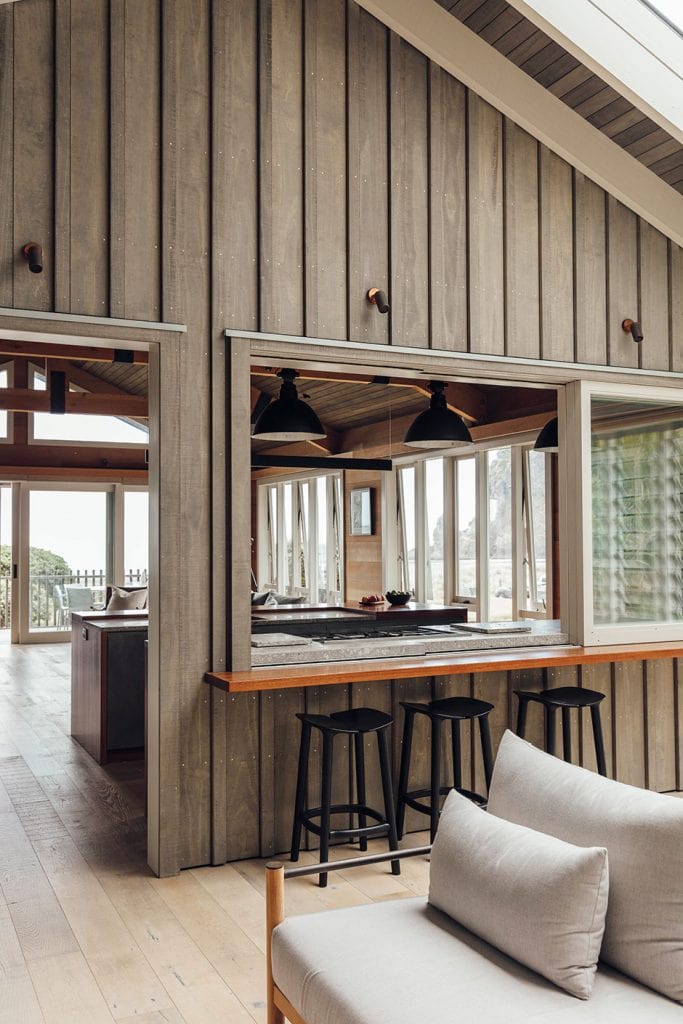 The exposed post-and-beam structure is made of purple heart. Although its colour might not be your cup of tea, Paul specified it for its strength, not its looks. “The builder needed a block and tackle to lift it,” he says. “It’s great for the edges and corners.” Macrocarpa roof trusses pair with this South American hardwood so the interior has the feel of an upscale barn.
The owners are no fans of plasterboard, and Paul and Mandy were happy to oblige. The walls and ceilings are lined in butt-jointed cedar planks — wide for the walls, narrower on the vaulted ceiling — and lighter-toned American oak flooring finishes off this encasement of wood. Since natural materials are the hero of this set piece, it’s no surprise to find iroko timber and pebbled stone on the same team on the kitchen benches.

Mandy, who trained as a graphic designer and has a fine arts degree, says her approach to the interior finishes was to keep the palette restrained. Her method is instinctual, and Piha’s grasses, diesel-coloured sea and strong black sand became her muses. It was she who commissioned the cast-bronze door handle for the front door, used toe-curling sisal on the stairway and discovered the old ship lights that now hang in the kitchen above the hob. Geoff, an accomplished cook, enjoys being in this ‘galley’ when entertaining, with the servery window that connects the kitchen to the much-used dayroom keeping him part of the conversation when friends or the couple’s three adult children — James, Emma and Lucy — are in residence. 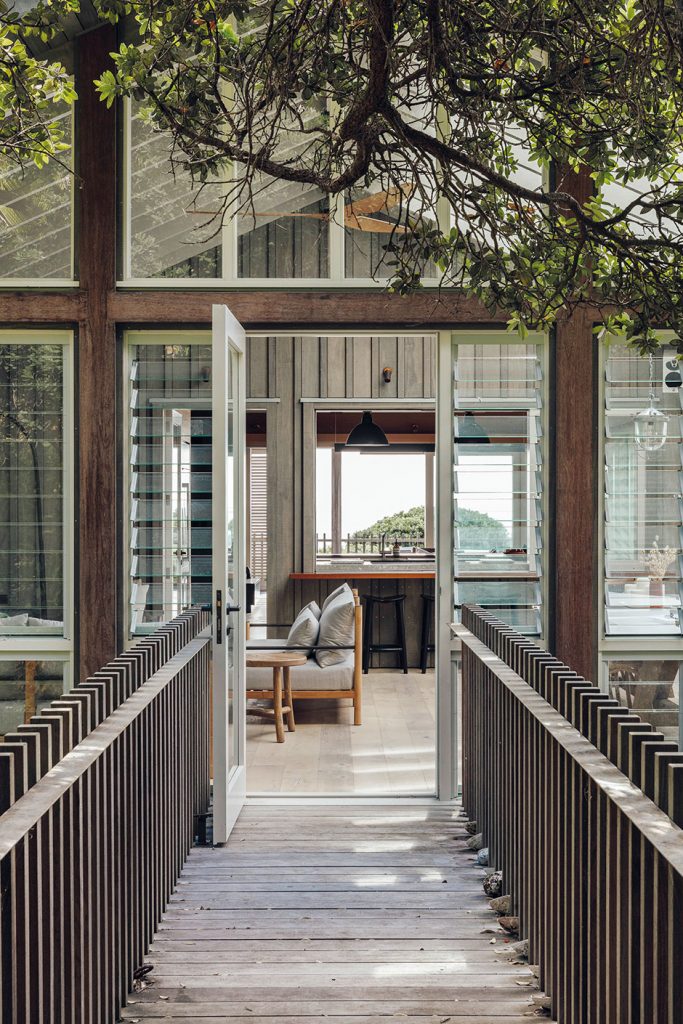 Although the family do spend time on the front deck, watching surfers and beachcombers while shifting the sliding screens for shade, it’s the indoor-outdoor dayroom facing that incredible parade of pōhutukawa that takes the star turn in this production. A careful composition in timber and glass, it has louvres (many of them) for ventilation, clerestories and roof glass facing north to let in as much sunlight as possible. “It’s probably our favourite room in the house,” says Geoff.
A long, concrete-topped table is primed for garrulous gatherings with Te Piha/Lion Rock in the frame beyond the louvres, there’s a fireplace finished in waxed blackened steel to ward off the chills and a bridge that leads from the back door for access to a native wonderland, where landscaper Andy Hamilton has planted so that the house melds organically with its surrounds.

Geoff and Rose have busy lives in the city but when work dies down, they love to jump into their 1966 Mustang to spin out west in style. On a typical weekend, they’ll head to the Piha Store for morning coffee and a bite to eat, then set off on a long walk to clear the cobwebs and explore how Mother Nature has shaped the beach and the rock pools today. Within this dynamic environment, the house is a constant: there will always be somewhere to sit and chew the fat with whānau. They’re content to feel part of this place, their tūrangawaewae. Changeable it may be, but there’s also a real sense of something enduring.