Words of wisdom from a relative resonated in Catherine David’s mind when she was redesigning her garden. “My aunt Margaret advised me to consider what it looks like from inside the house,” says the Tāmaki Makaurau/Auckland product designer.
A creative spirit such as Catherine might naturally see the value in appreciating beauty from multiple viewpoints, but it’s not something everyone would consider. This is the level of thought that has formed the foundation of the Ōrākei Creek property she and her otolaryngologist husband Michel have called home for 23 years. 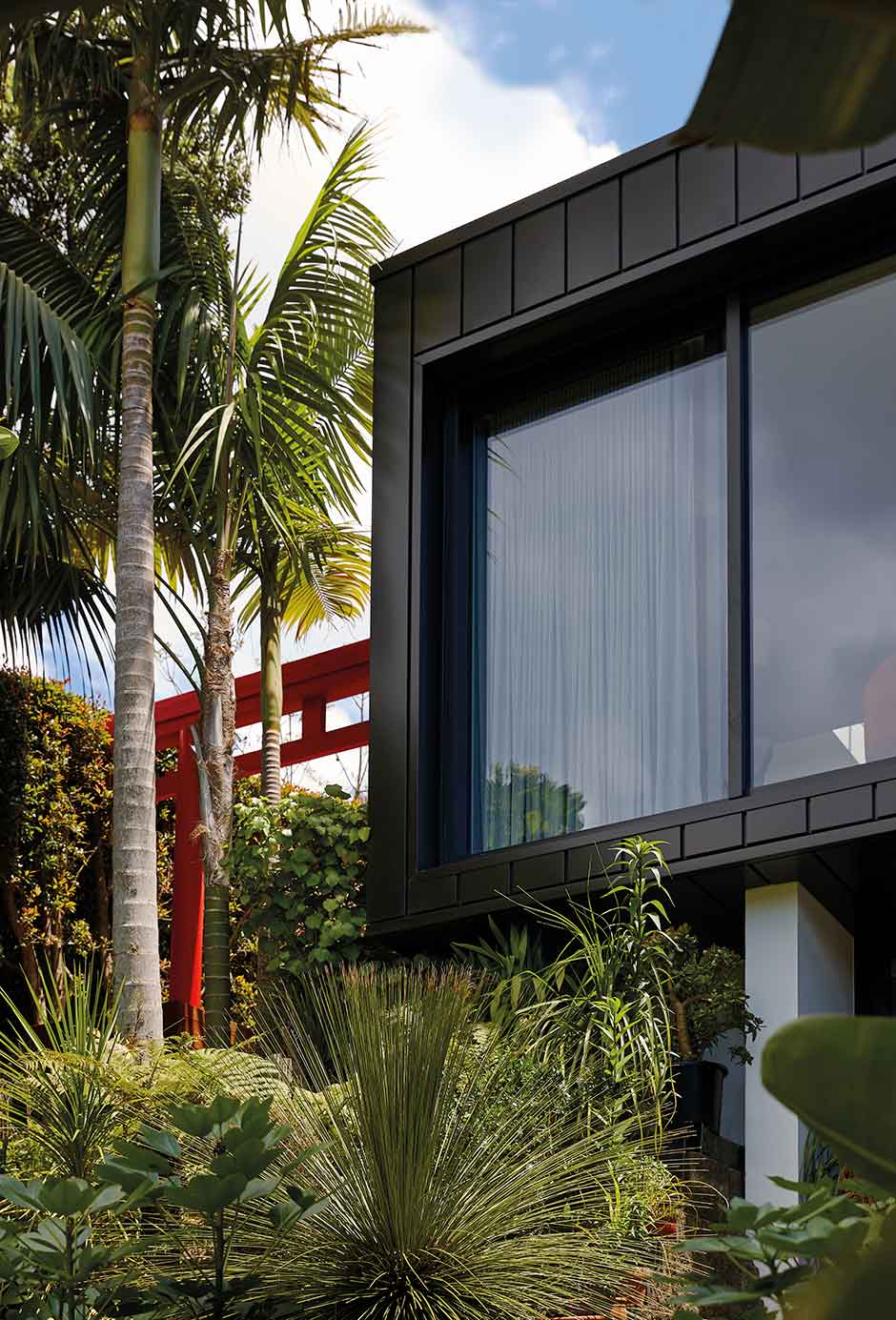 Plant by plant, the couple gradually built up the original garden, adopting a tropical theme through layers of different-sized leaves, natives and palms. Last year, they extended this theme by revisiting the landscaping during the renovation of their home with architect Vlad Cekus of BVA Studio and builder Mark Hoogwerf, pairing their vision with the expertise of landscape designer Kirsten Sach to create a waterside sanctuary at the bottom of their steep section where it meets a tidal inlet in the Ōrākei Basin.
“After living here for 20 years, we know the best parts of the house,” says Catherine. “When we decided to stay for another 20, we noted all the spaces we liked and highlighted them by making them living spaces.” 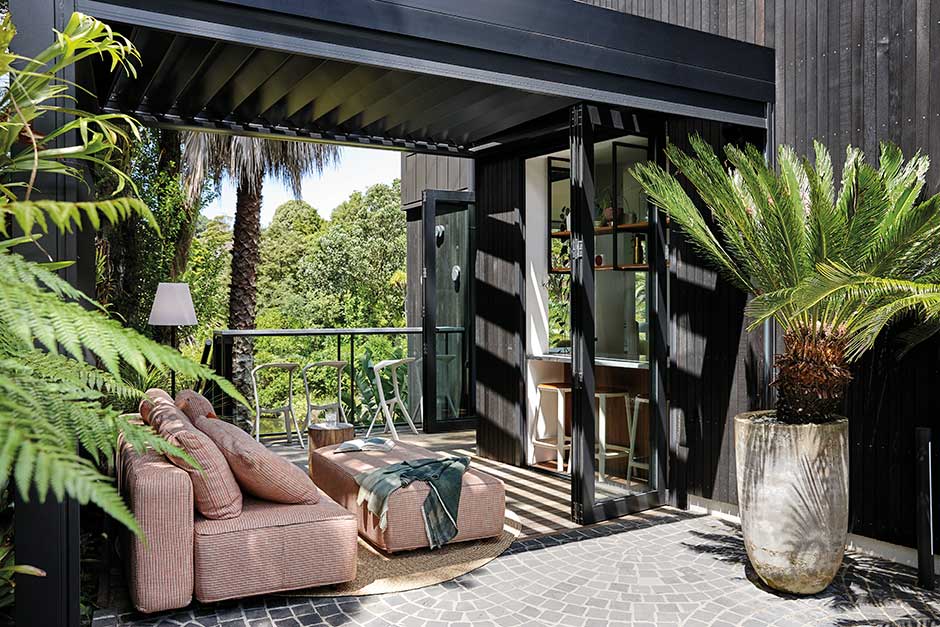 The logic of considering how the outdoors looks from indoors has been harnessed throughout the new garden, which is split into five separate zones. At the entrance to the home, on the northern side, is a circle of cobbled pavers. “You can look out the window upstairs and see a pattern of stones,” says Catherine. “It has such a nice texture and is a touch of Germany for Michel, who’s originally from Wuppertal.”
Also here is an updated outdoor lounge area, where lush greenery and birdsong are abundant. A transparent screen can be pulled down to provide shelter on one side, while a glass balustrade allows a view of the greenery and water on the other. “This used to be a kitchen garden, until we realised it got a lot of sun, so we made it an outdoor lounge,” says Catherine. “Now we use it a lot, including as a breakfast bar and for evening drinks.” 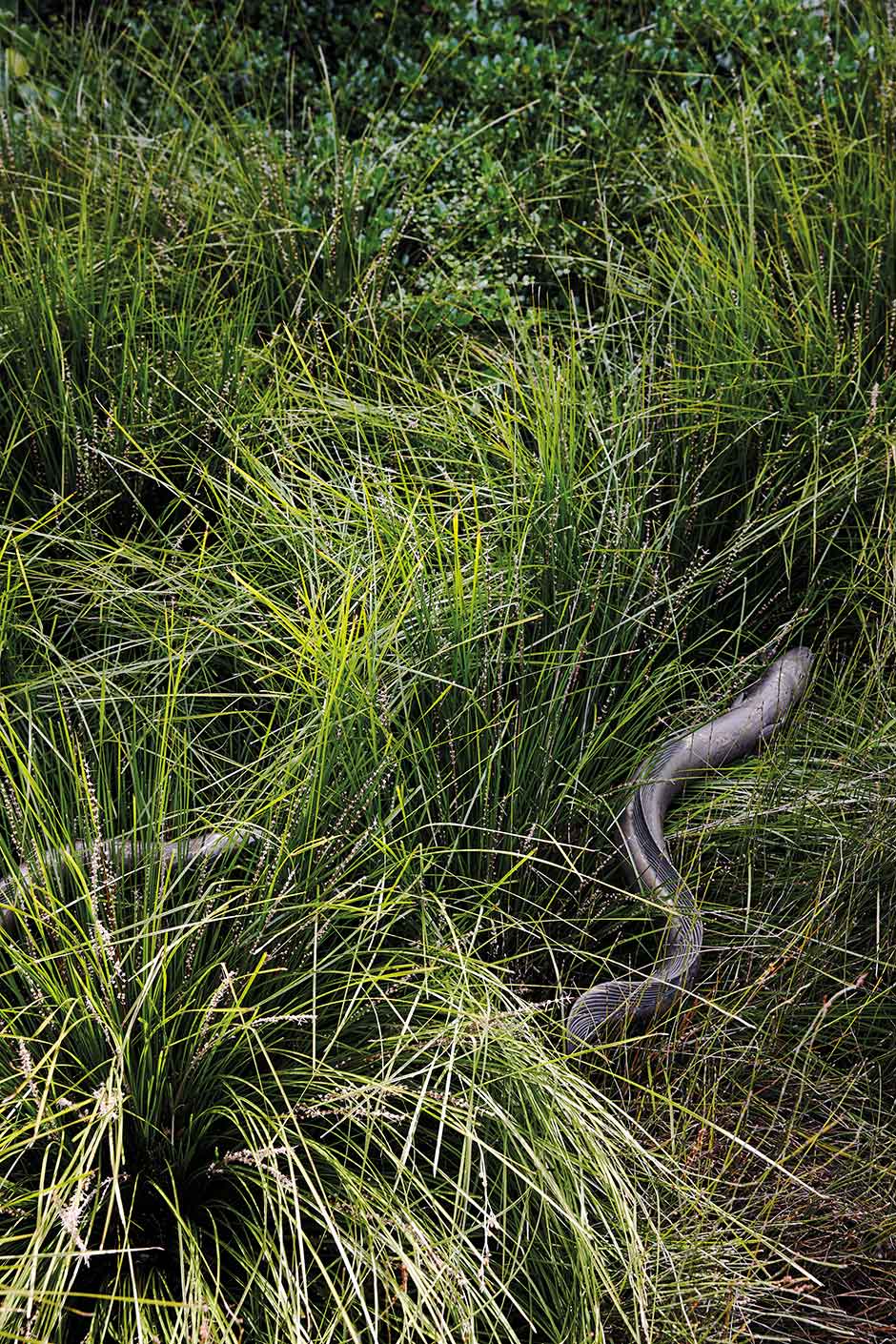 A few steps down, a once self-contained rented apartment has become guest quarters that open onto a flat lawn. To make the garden at the estuary’s edge further down the slope more user-friendly, the couple and Kirsten devised three circular floating decks. Like lilypads, they pay homage to the setting and blend beautifully with the surrounding reeds. “We wanted something we could look down on when we were standing in the living room, creating a resort feel from within,” says Catherine.
Kirsten says she designed the decks to be reminiscent of the islands in the estuary and provide a relationship with the water. They’re moveable and set high enough to withstand flooding. “They celebrate a sense of place,” she says. “If we’d built a square deck, it wouldn’t have worked as well. Instead, we’ve provided real integration between the land and the water.”

On the southern side of the house, Kirsten designed decks that combined with a thoughtful choice of plants have turned a previously underused area into an attractive zen-like destination. Elevated to cater for a water tank, the statement feature here is a traditional Japanese torii gate Catherine designed to frame the view.
“The ‘floating’ decks give this zone a peaceful feeling, while the torii gate, from the Shinto religion, represents the border between the secular and sacred worlds,” says Catherine. “The gate acts as a passageway, which is perfect because from here, you can either go down to the water or up to the house.
“Few plants grew here on the south side of the house,” she continues, “so Kirsten presented a concept drawing of this area, then I selected plants that looked similar to the ones she’d sketched, such as tractor-seat plants and grasses that tend to grow better in shady conditions.” 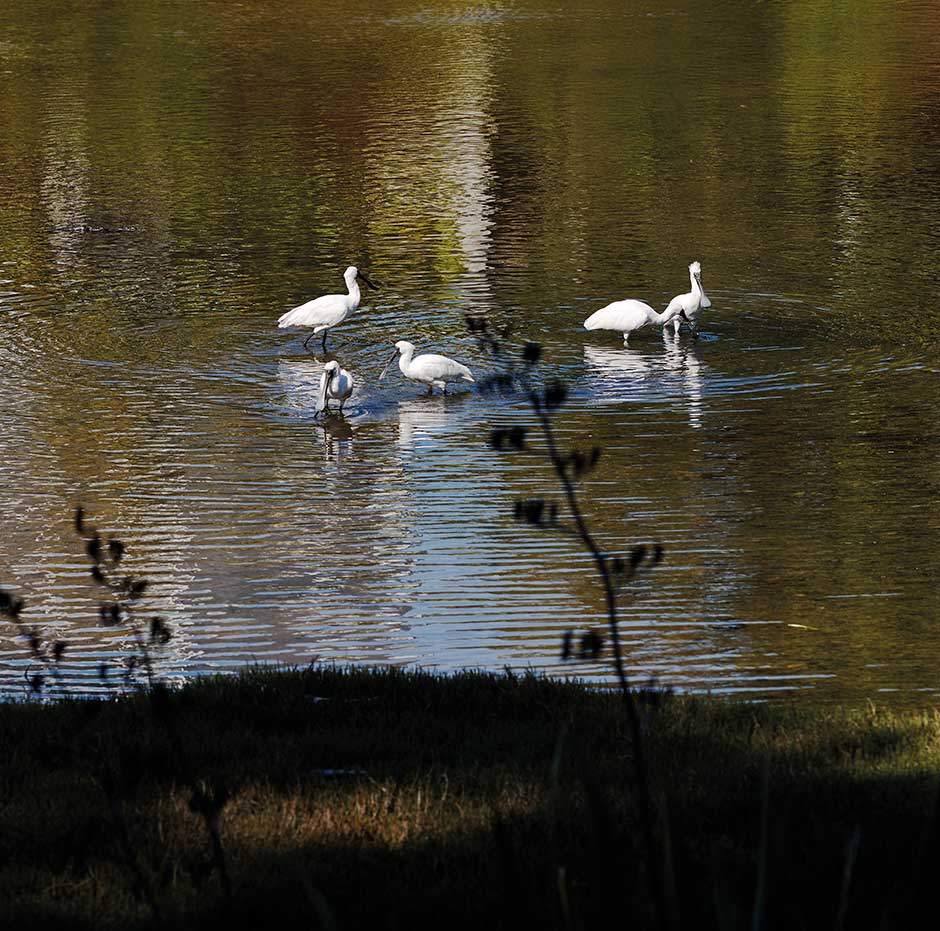 Kirsten believes the appeal of all this lies in its less-is-more approach and the way the various zones harmonise. “This garden celebrates simplicity — it’s not over-thought and there’s no bitsy stuff. It’s simple and effective, and having steps integrated into the steep site makes for good flow.”
The outdoor rooms in this garden provide ever-lasting pockets of bliss for Catherine and Michel. “We can follow the sun around the house,” says Catherine. “In the morning, we get it on the decks; in the afternoon, it’s in the outdoor lounge; and when it’s at the back of the house, we can enjoy the zen area. There’s always somewhere comfortable to sit.”