In association with .
Looking from the balcony of this home along the golden-sand stretch of beach before it, you can’t help but be awed by the sweeping panorama of the coast, from Mauao/Mt Maunganui at one end to Maketu at the other. It’s a scene architect Brendon Gordon appreciates as much as anyone. “Each site here has its own unique view of Mt Maunganui,” he says. “Having designed more than a few houses along this strip, you come to understand how to take advantage of that outlook pretty well.” 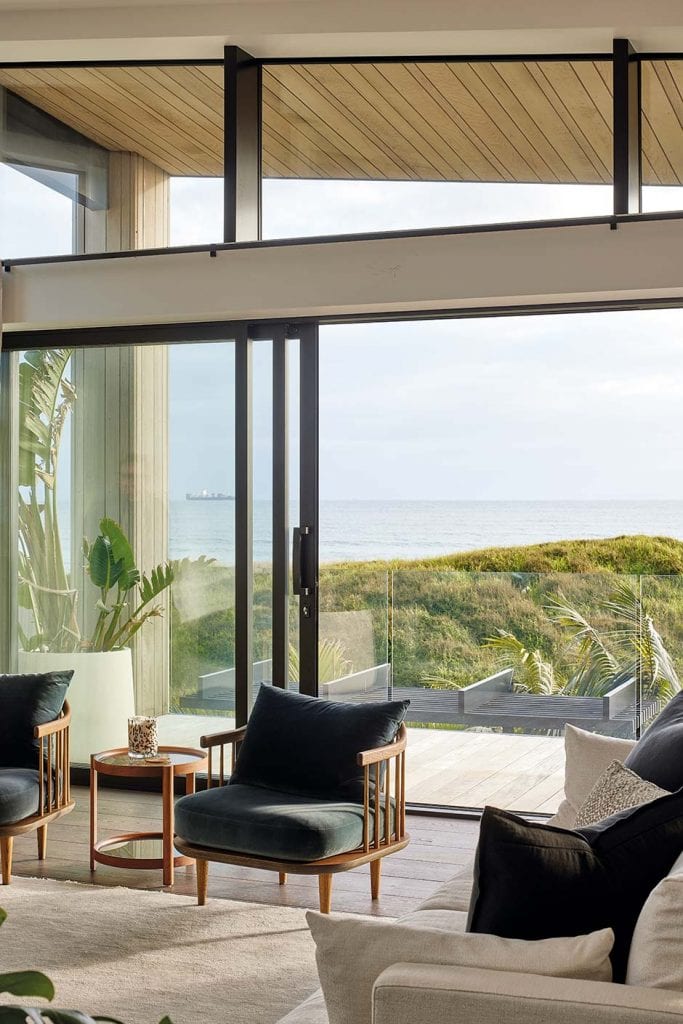 Previously occupied by a ’90s home with all the hallmark curves and quirks of the era, the location offered opportunity by the bucketload for Brendon’s clients, who were relocating from a rural property to create their own version of paradise by the sea. “They have a real affinity with classic California Modernist architecture, particularly the work of John Lautner,” he says. Thus, “the roofline here is a bit of a hat tip to some of Lautner’s forms, where we responded to planning constraints while maximising the light and outlook with the roof pitched in such a way that we could get a view from the main bedroom through the living pavilion and out to the horizon.” 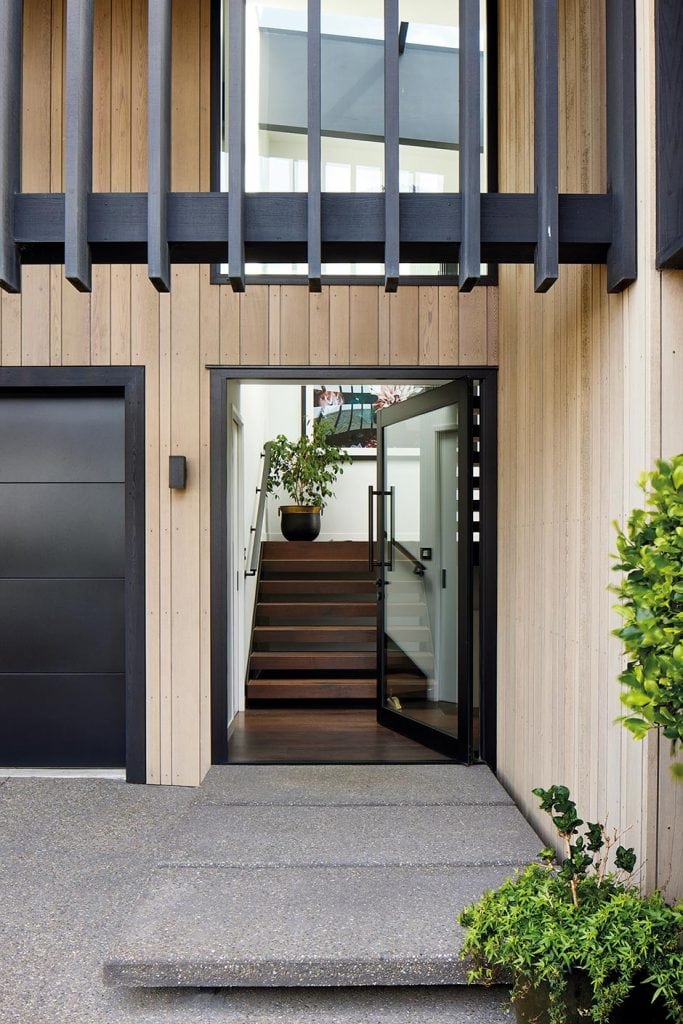 The environmental challenges of residing on the coast called for moves that make the house easy to live in and minimise maintenance, particularly in the material selection and external elements like the concealed fixings. Set behind the dunes, the exterior palette melds naturally with the surrounding greenery —an established tropical garden amid grassy knolls, between which a trail leads to the beach. Cedar slats line the house in irregular widths — a pleasingly random detail among all the straight lines and structure — punctuated by black anodised joinery from First Windows & Doors. 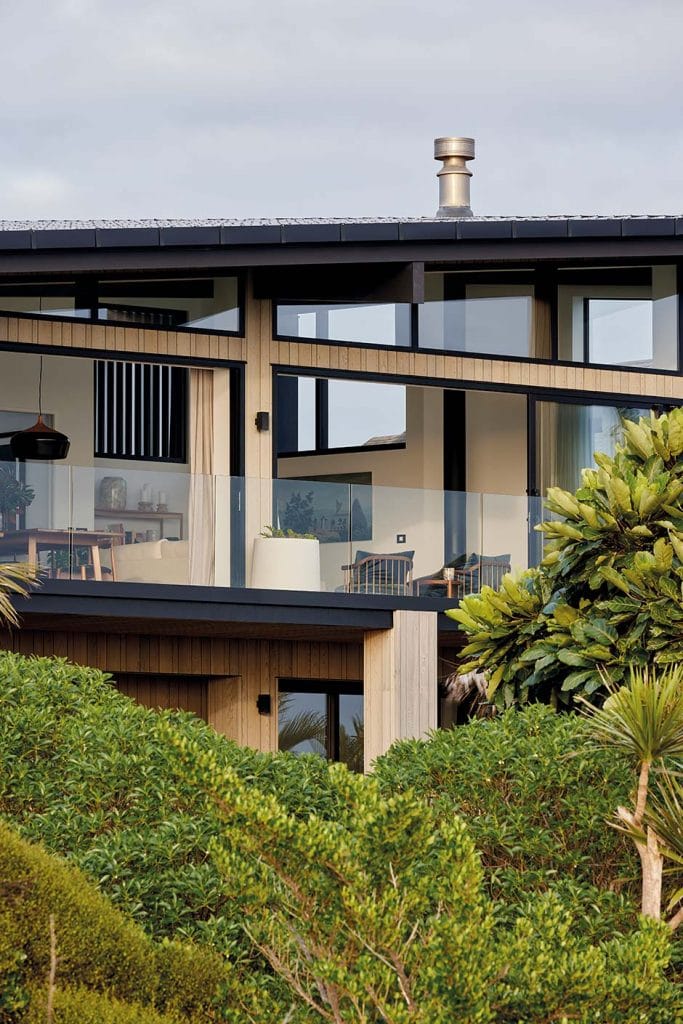 Boldly turning its back to the street with a steel and cedar facade, on arrival the built form has a Brutalist feel. “It grabs the space and holds the ground,” says Brendon. “Then as you enter, you tuck into the house for an experience that takes you away from the suburban setting for a direct connection to the beach.”
Part of a two-storey, split-level floorplan, the main living, dining and kitchen pavilion spans the width of the home’s top storey, where multiple Metro Series stacker sliding doors from First Windows & Doors lead onto a covered balcony that was extended in the renovation process. With generous eaves and expanded decks, living takes place almost as much outside as it does in, while clerestory windows above the sliders let abundant light inside. 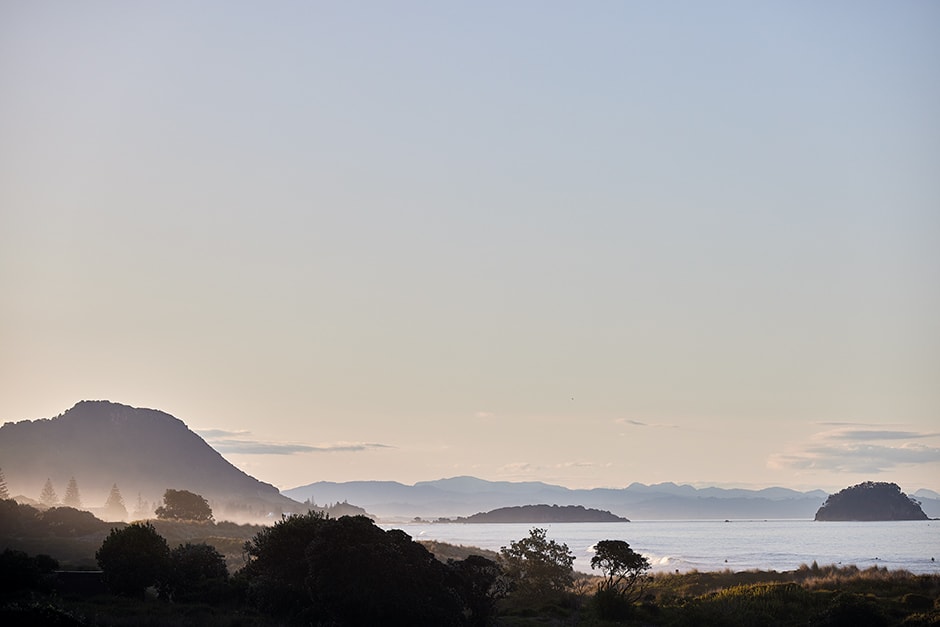 Peeling off from the living and entertaining areas, journeys to the streetside portion of this storey and downstairs ease you into more retreat-like private spaces. The remainder of the first floor is given over exclusively to the main bedroom, dressing room and ensuite, which have been laid out with generous proportions to form an escape when the house is full of visiting family and friends. In contrast to the robust materials applied to the exterior, details such as their glass-fronted wardrobes, brass bathroom cupboards and marble shower surround add a luxe touch. 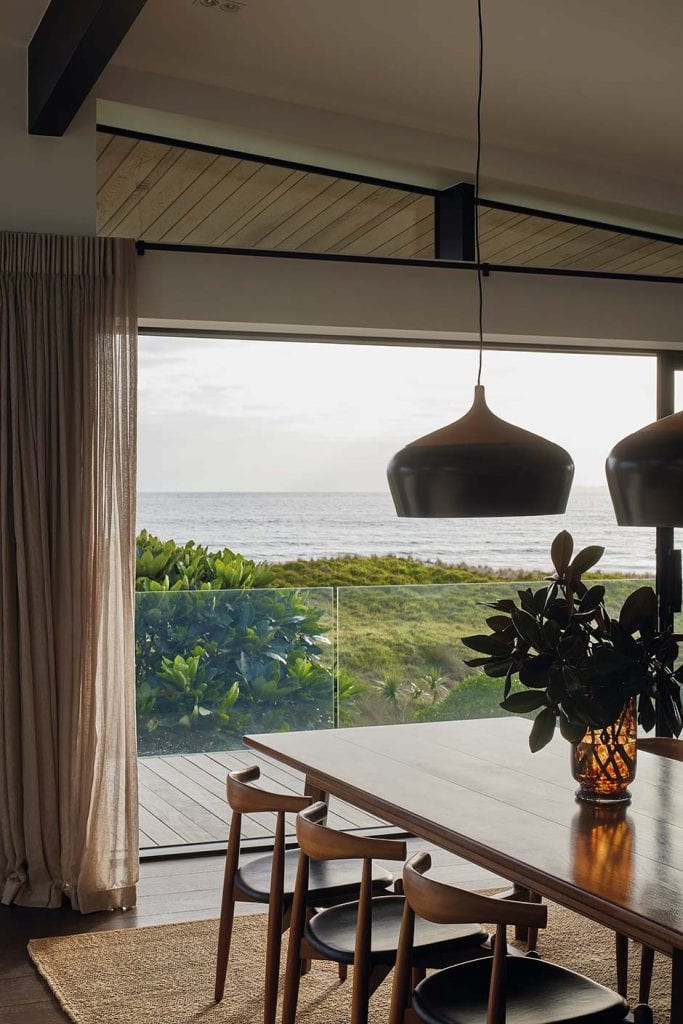 Alongside clients who were heavily invested in the interior design, for Brendon, a real focus of this project was creating moments in and around the house that fulfill its true potential. Even the transitions between spaces work beautifully: the roof window over the stairwell that draws light into this circulation zone, outdoor rooms that enable living in the landscape, the surfboard nook and gardening bench under the stairs outside… 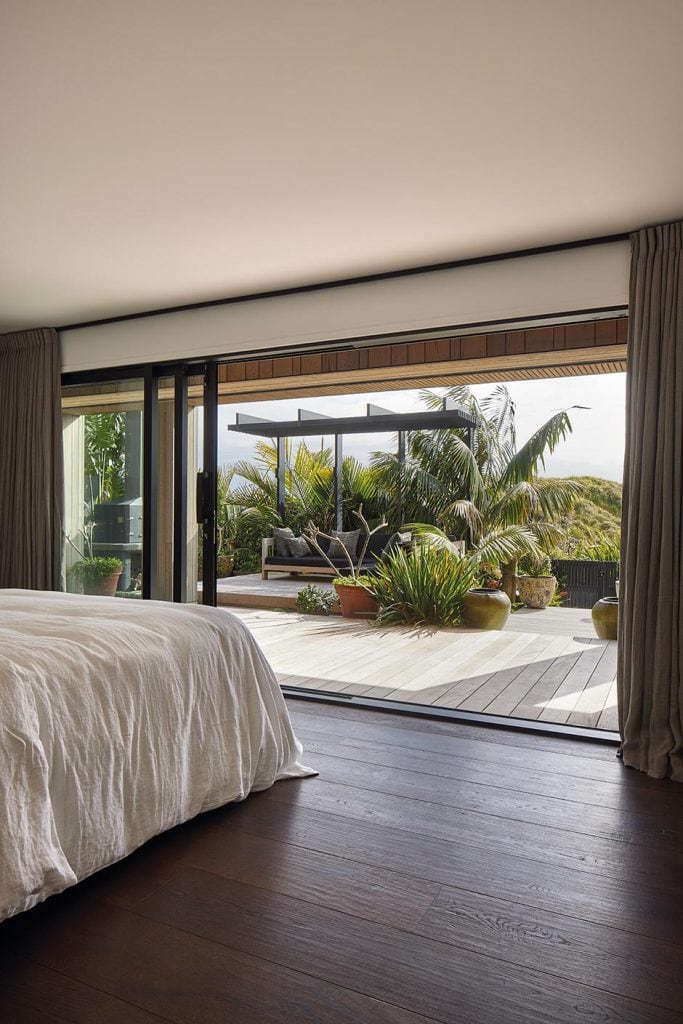 “We also pay particular attention to what the view shafts are and where the neighbours are,” says Brendon. “That’s the nice thing about coming in to renovate — you know where you have to screen, shelter or plant to control that and create that privacy.”
For a relatively public site, the resounding feeling here is one of seclusion, protection and comfort. It’s the kind of coastal hideaway that whisks its owners away from the worries of the world and back to what grounds them.