Australian Hospitality Venues to Visit in 2023

Discover our edit of must-visit Australian hospitality venues for 2023.

To welcome the new year and gain some perspective on what it might bring, we’ve chosen to hero five recently-opened venues that embody the ethos of . From a Sydney rooftop bar that aims to recognise local craftsmanship to a Melbourne pizzeria inspired by its local community, this lineup speaks to how our hospitality scene is constantly evolving and embracing new ideas – something we certainly don’t take for granted.

With a commitment to sustainability and multidisciplinary collaboration, Fiona Lynch Office brings meaningful design to every corner of the space.

The hotel is located in a and was once home to one of Australia’s oldest known Kilns. “From the outset, Ace wanted it to be an Australian take on what an Ace Hotel could be – one that would reflect Australia’s culture, colours, and design language,” Fiona says. “Their desire was for Kiln to feel like a distinctly different space within the hotel,” Fiona adds. Occupying the building’s top level, Kiln maximises its Unexpected city views are revealed throughout the two dining areas, two bars, a lounge and two terrace dining areas. 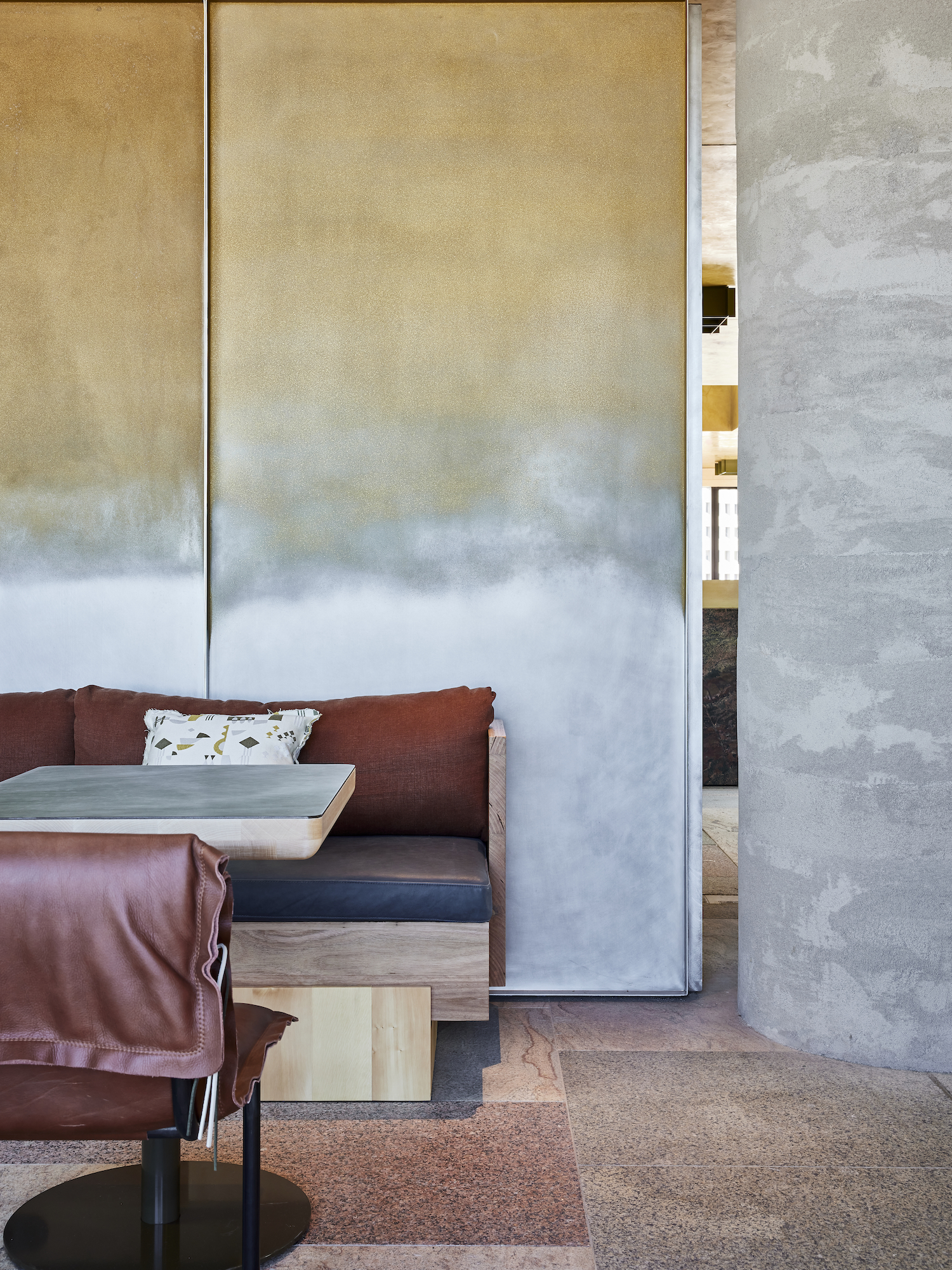 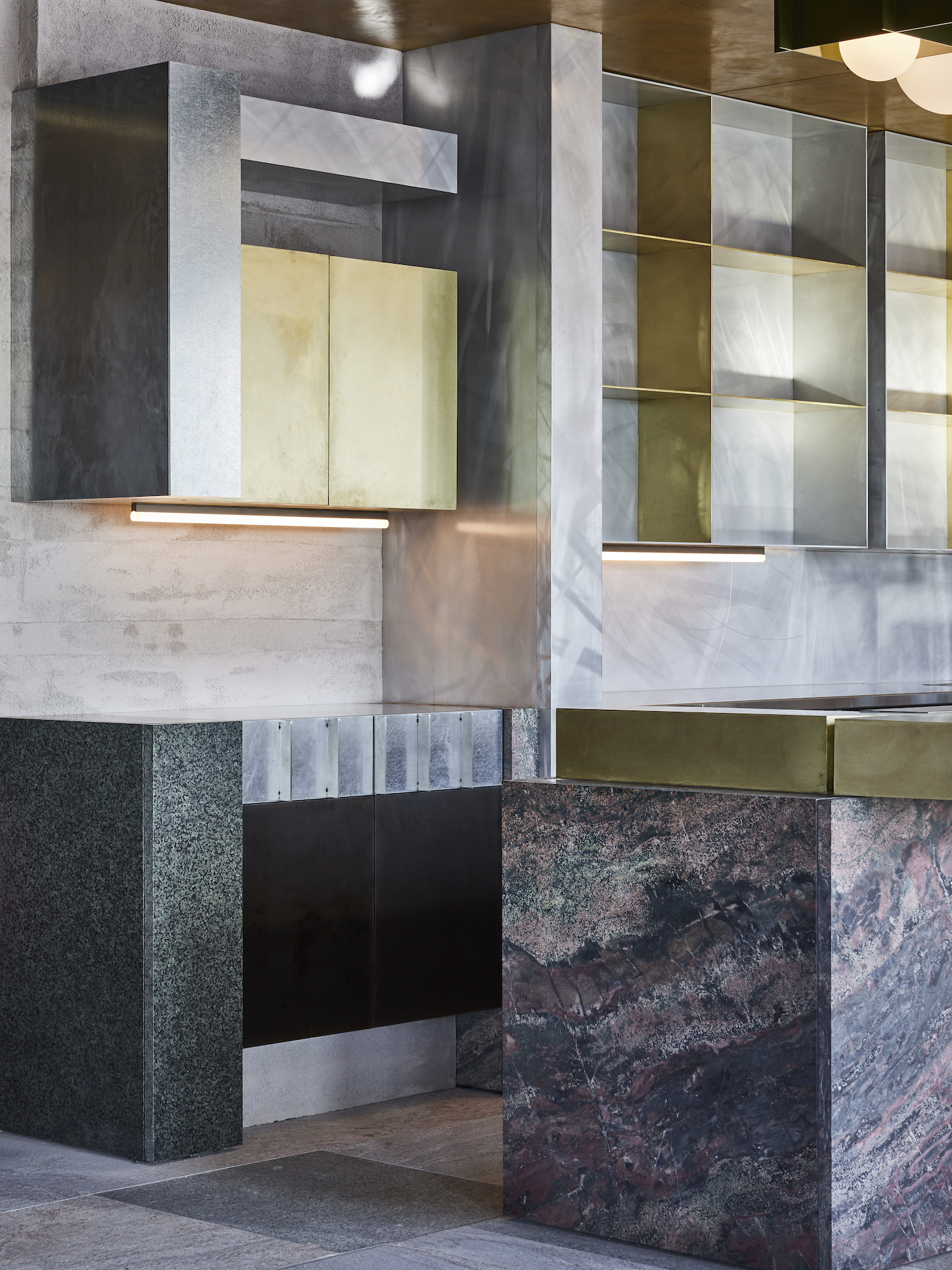 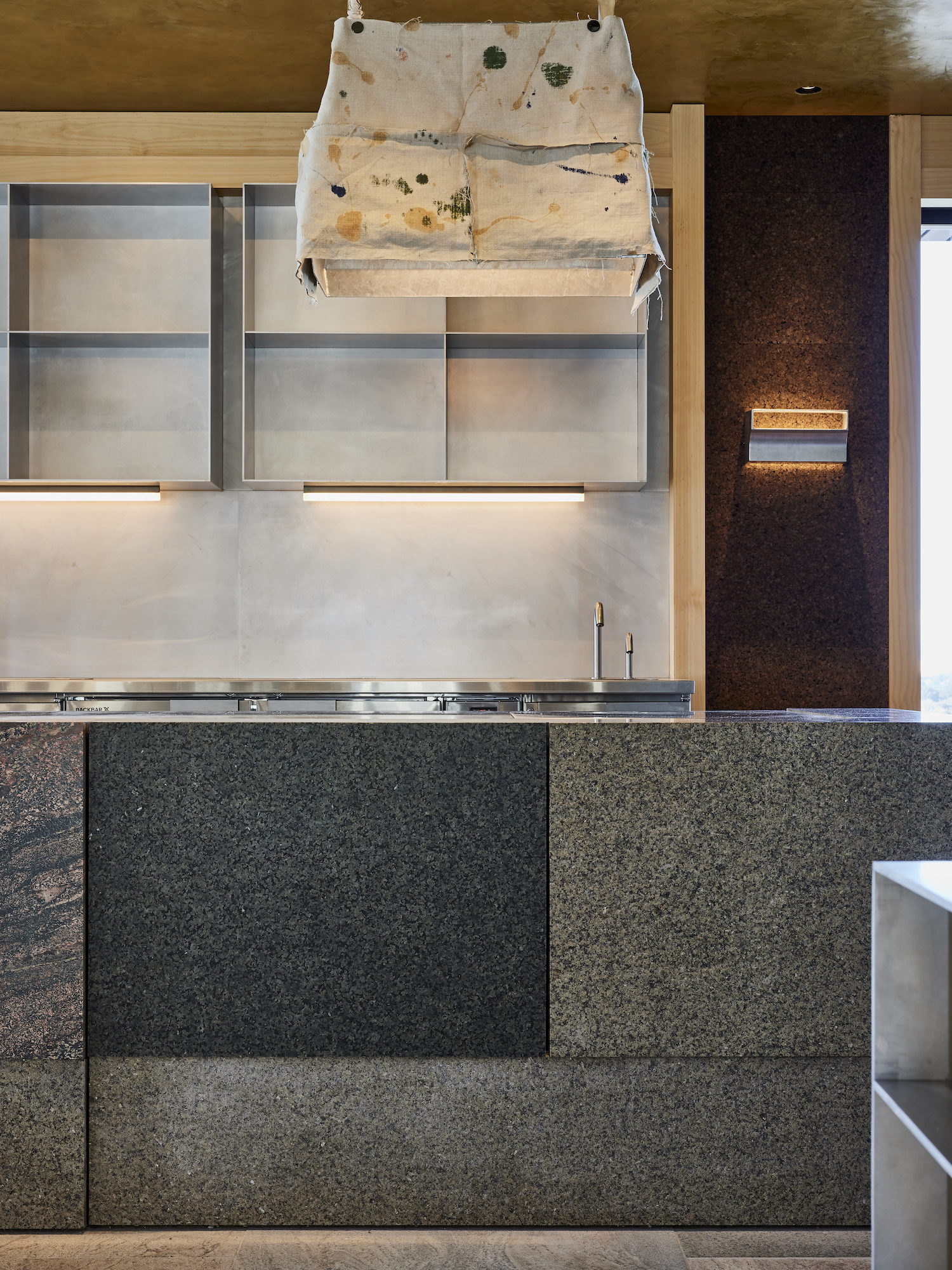 A bar and dining room in Adelaide’s CBD, conceived by , takes cues from Italy and New York’s dynamic hospitality scenes. evokes a deep sense of nostalgia through the blending of the two worlds and different materials. Velvet, leather, marble, timber – you name it. Studio Gram co-director Dave Bickmore describes it as “a romantic, textural representation of the past that simultaneously manages to remain firmly rooted in the contemporary.”

The hospitality brief specified an elevated yet relaxed style of dining: drinks and nibbles at the bar – which could easily be a set from The Moulin Rouge – and long stays in the dining room, where guests can sink into plush booth seating. Custom joinery pieces finished in a striking high-gloss red serve to unify the two spaces. “As a whole, the space feels like it is made for the future; an all-encompassing journey through service, food, drink and design,” Dave says. 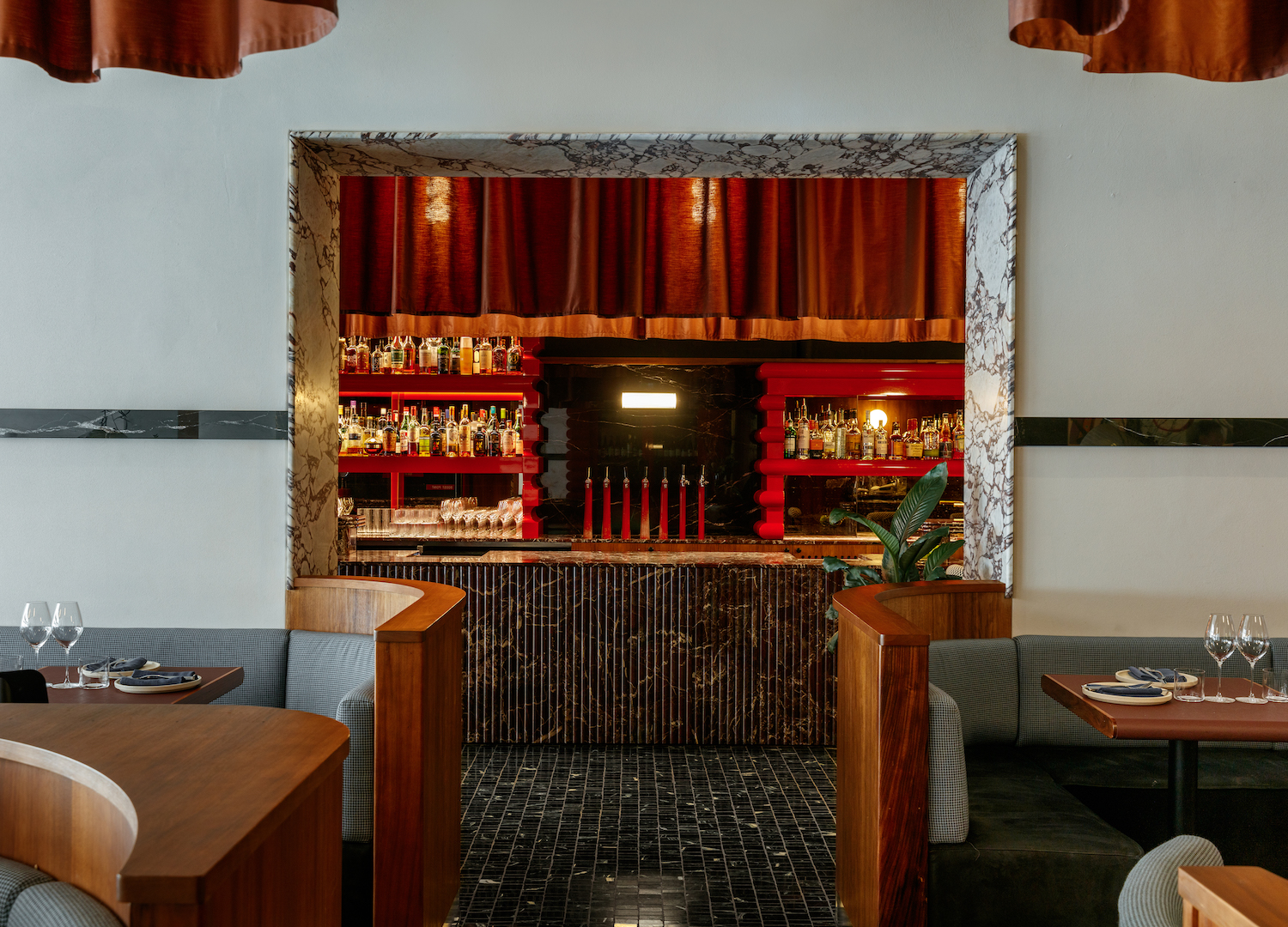 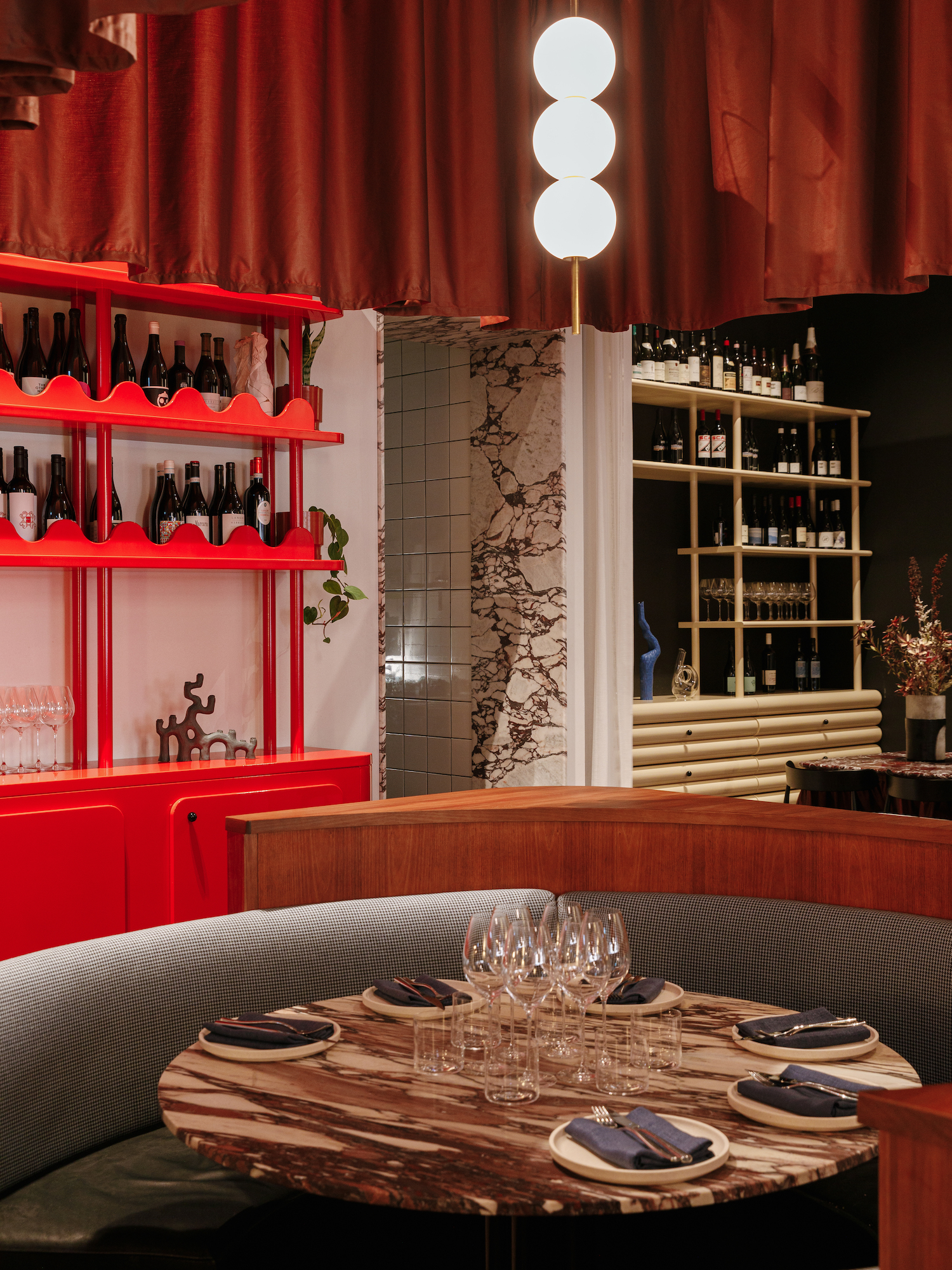 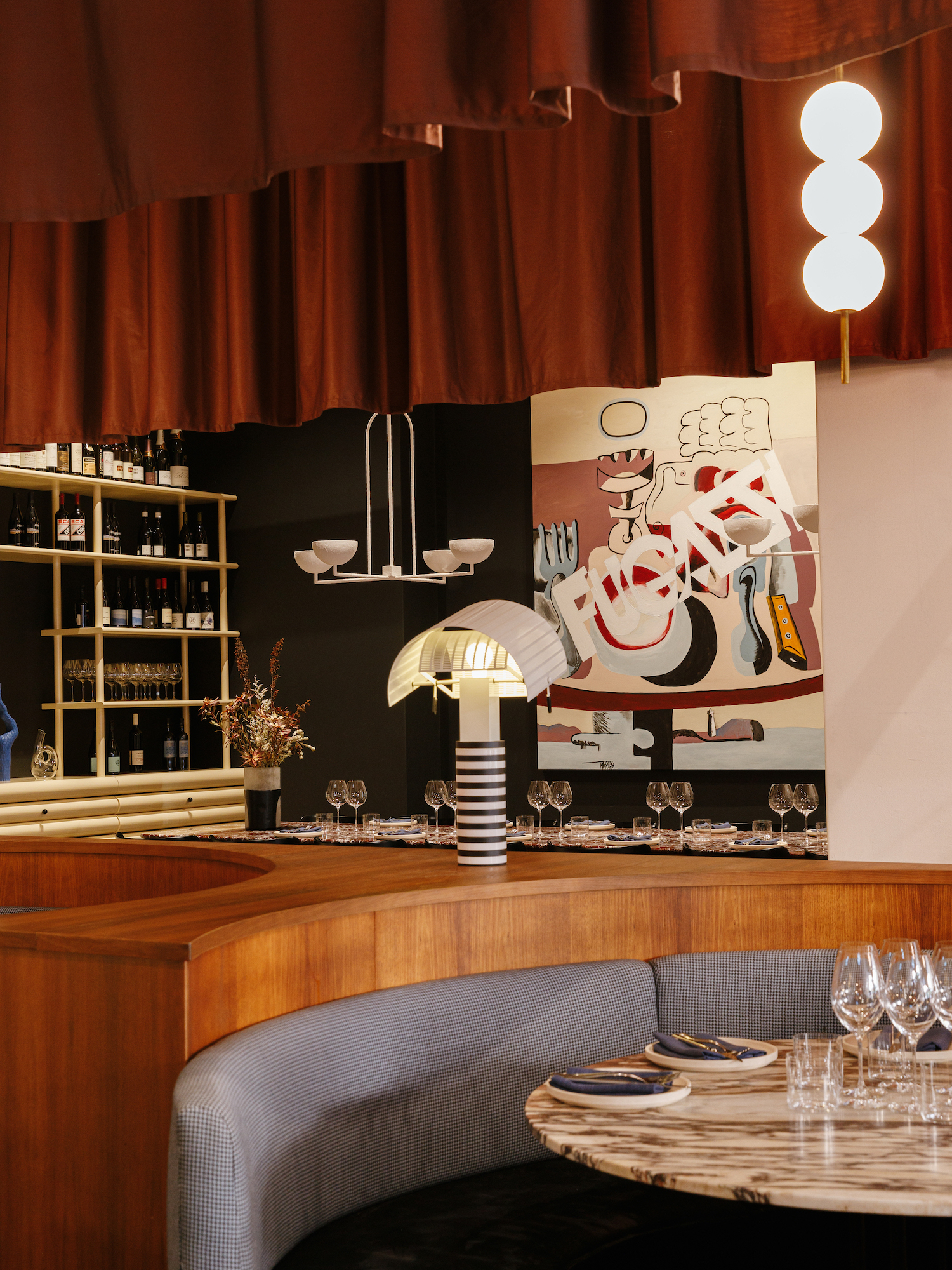 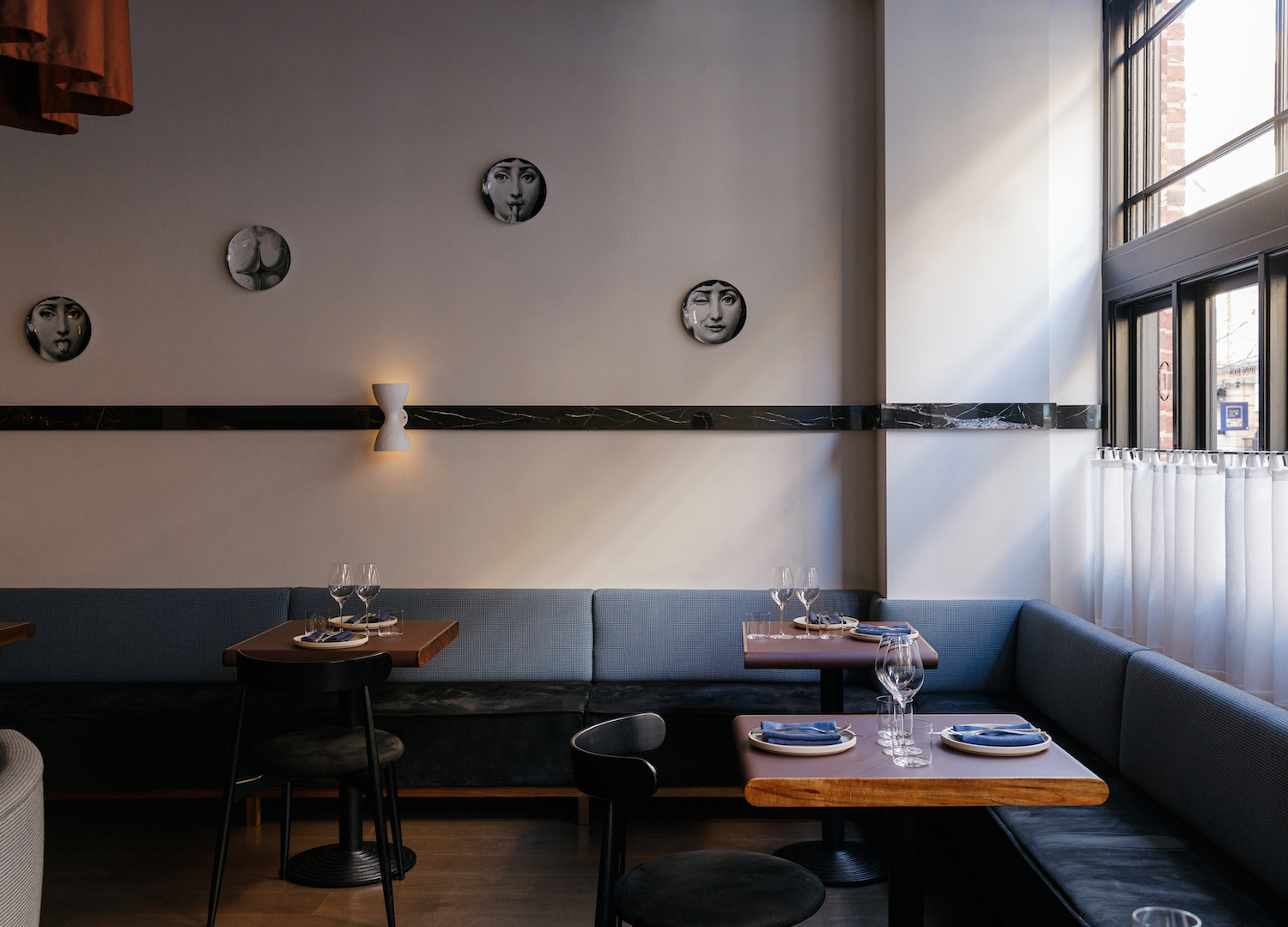 Inspired by Japan’s Kawaii culture and the Hyperpop music movement, is a radical, pint-sized venue situated in Melbourne’s Hawthorn. Melbourne-based studio were tasked with translating the store’s Japanese-infused flavours into a tangible space. This challenge required them to tap into their senses and explore the intersection between food and design.

Hyperpop – a niche pop music genre that only originated in the last decade or so – was used as a point of reference throughout the project’s duration, specifically its very recognisable posters. “The space is designed to appear 2D, like a Hyperpop music poster you might see plastered on a laneway in Tokyo,” Architects EAT co-director says. The store’s bubblegum-pink palette, which has its roots in Japanese Kawaii culture, contributes to this feeling.

The galvanised steel island bench is the project’s hero, neatly housing everything from ice cream scoopers to point-of-sale equipment. “The counter took a lot of physical, real-scale prototyping to get right, but the result was worth it,” Albert says. 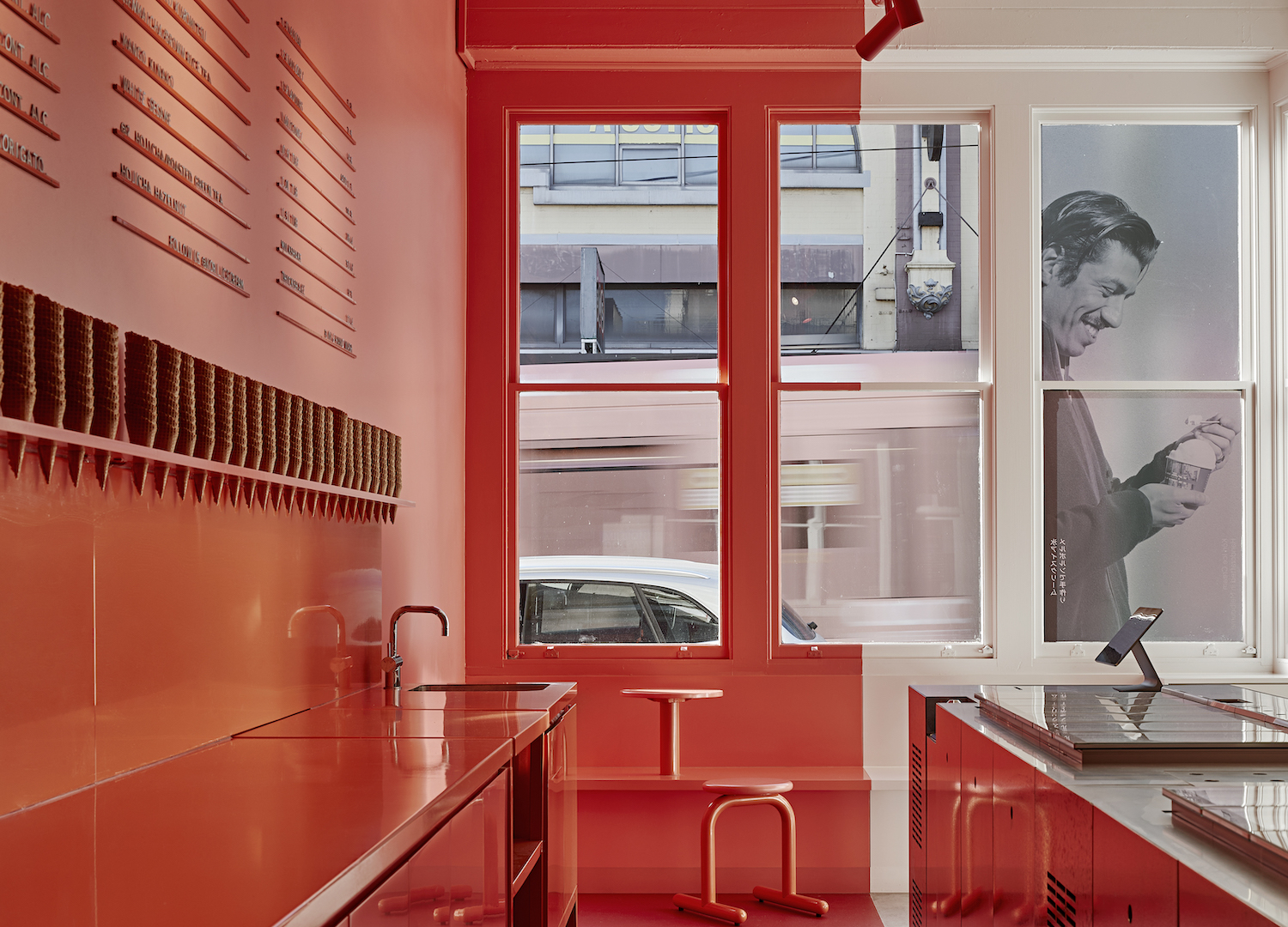 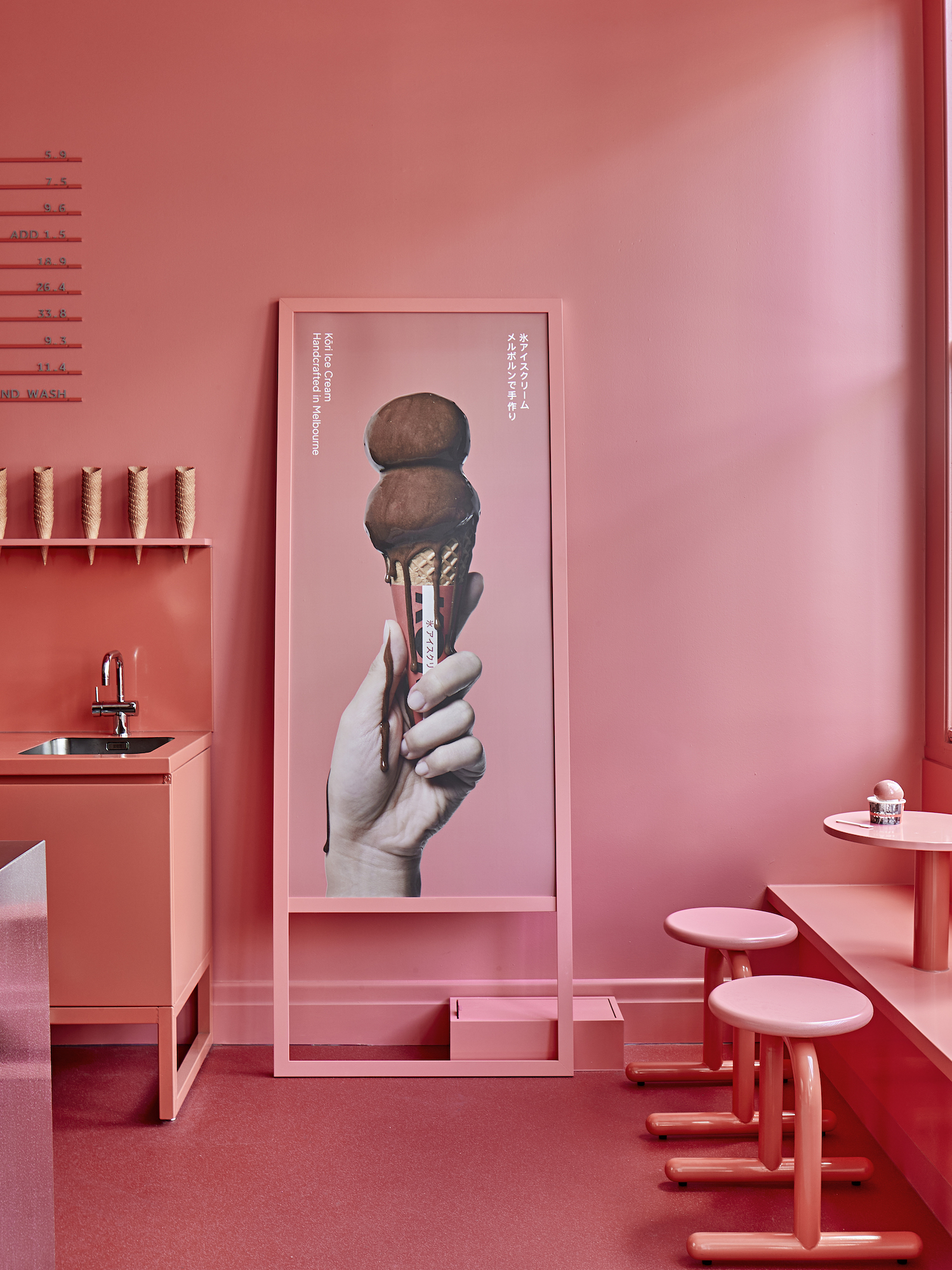 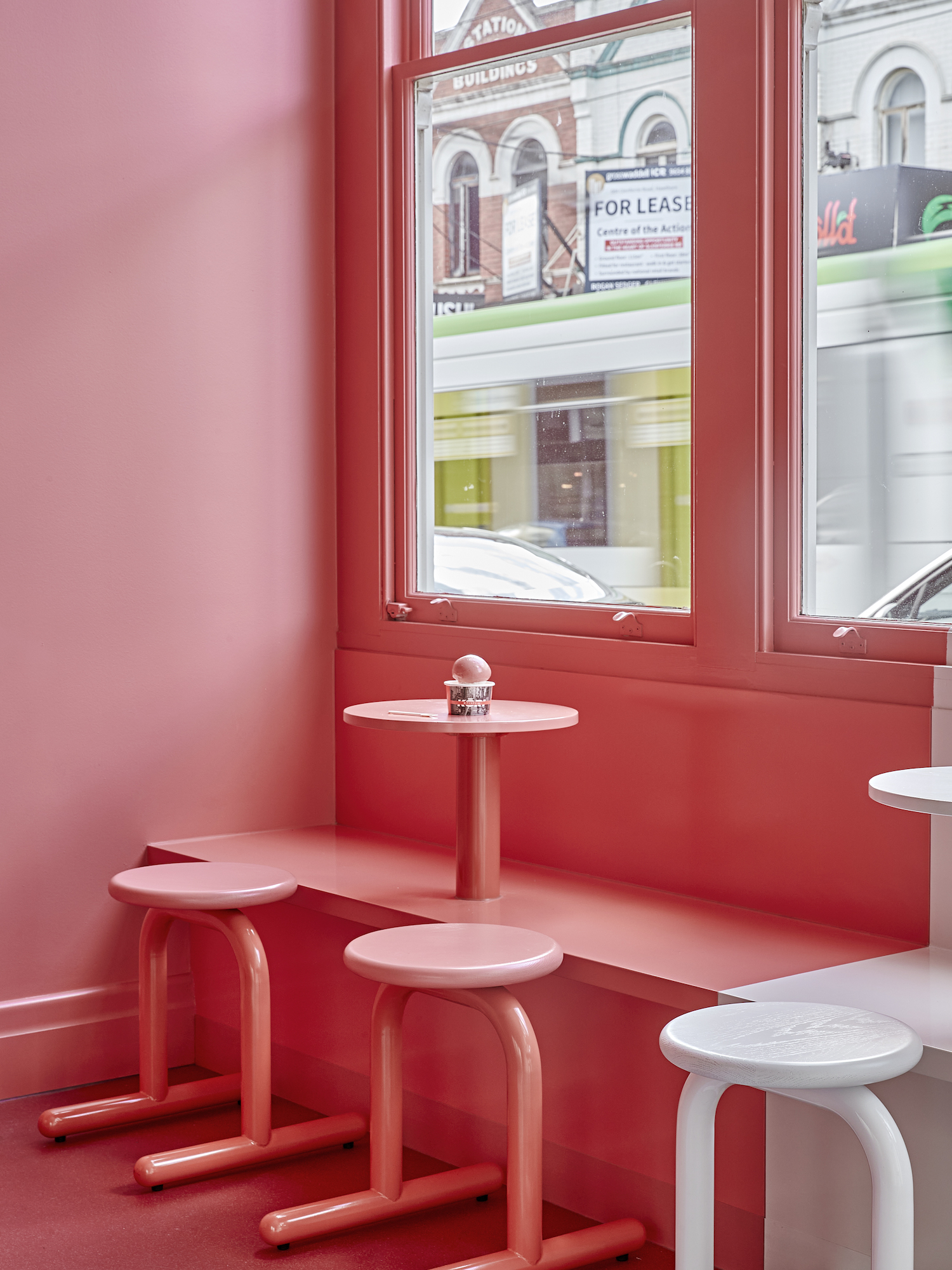 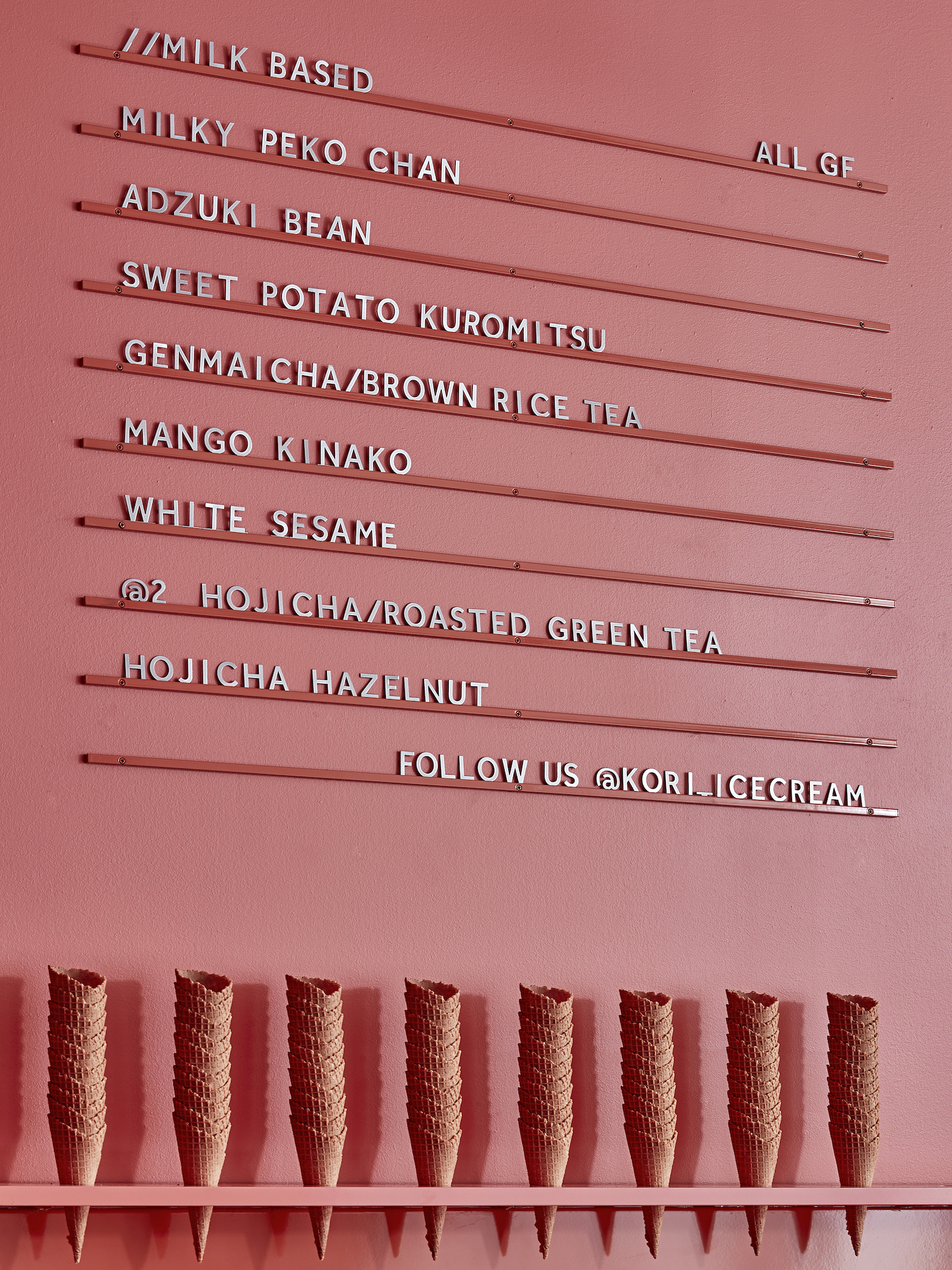 One of Australia’s most renowned chefs, Neil Perry, has unveiled a new venue in Sydney’s vibrant Double Bay. Enlisting the expertise of and , Neil’s vision of an idyllic neighbourhood restaurant has been brought to life. The restaurant’s name, Margaret, is a tribute to his late mother, from whom he inherited his love for food and cooking.

Margaret’s design evolved from an image of a single oyster – initially put forward by Niel as a symbol of freshness and purity. “The palette is a serene collection of colours and finishes, carefully selected to evoke a sense of warmth and sophisticated enjoyment,” David Caon says. Caramel leather seats, terracotta-tiled floors, aquamarine carpet and cream-plastered walls – as well as a collection of art and lighting commissioned especially for the space – compound to form an eclectic coastal atmosphere. 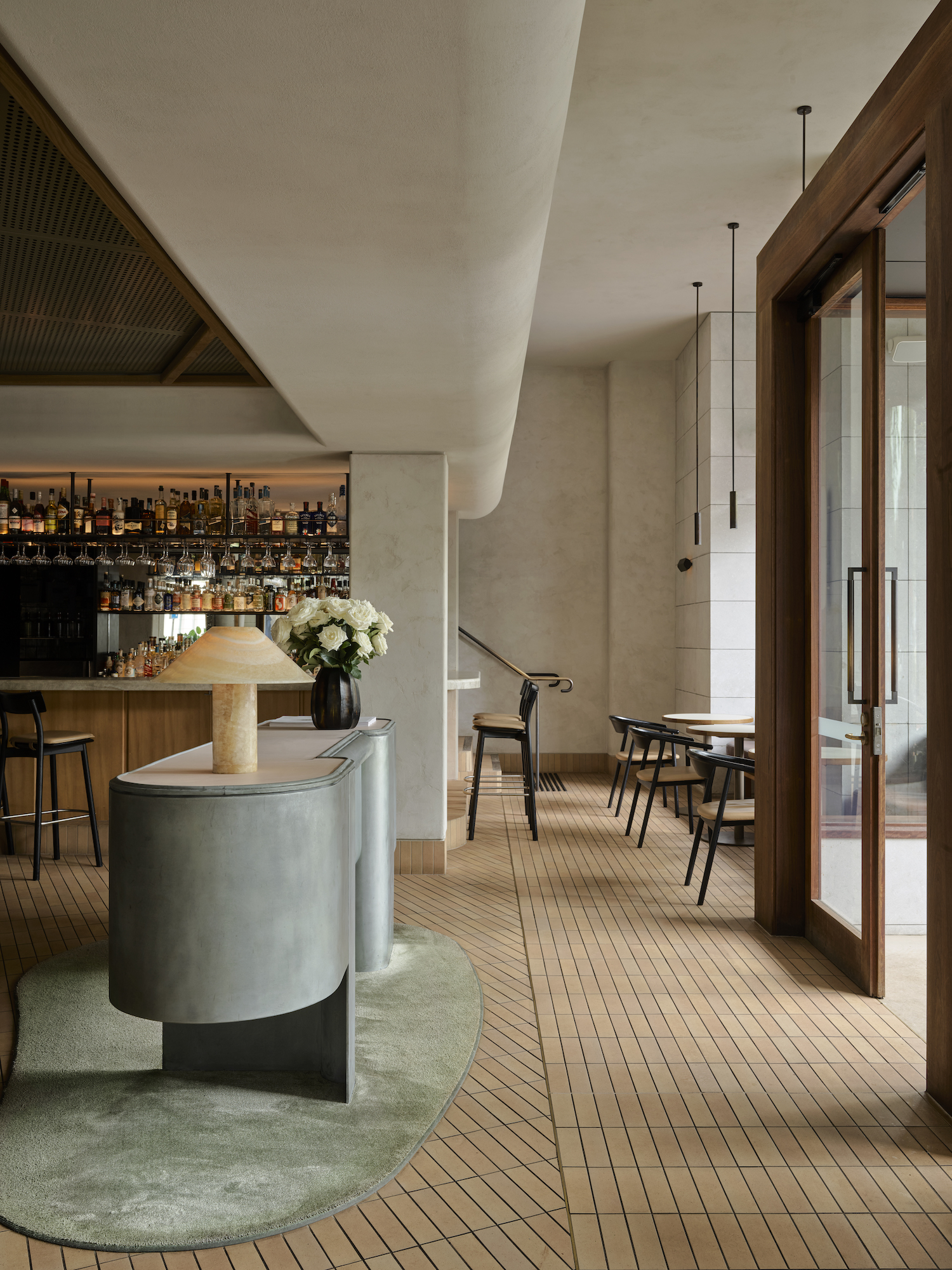 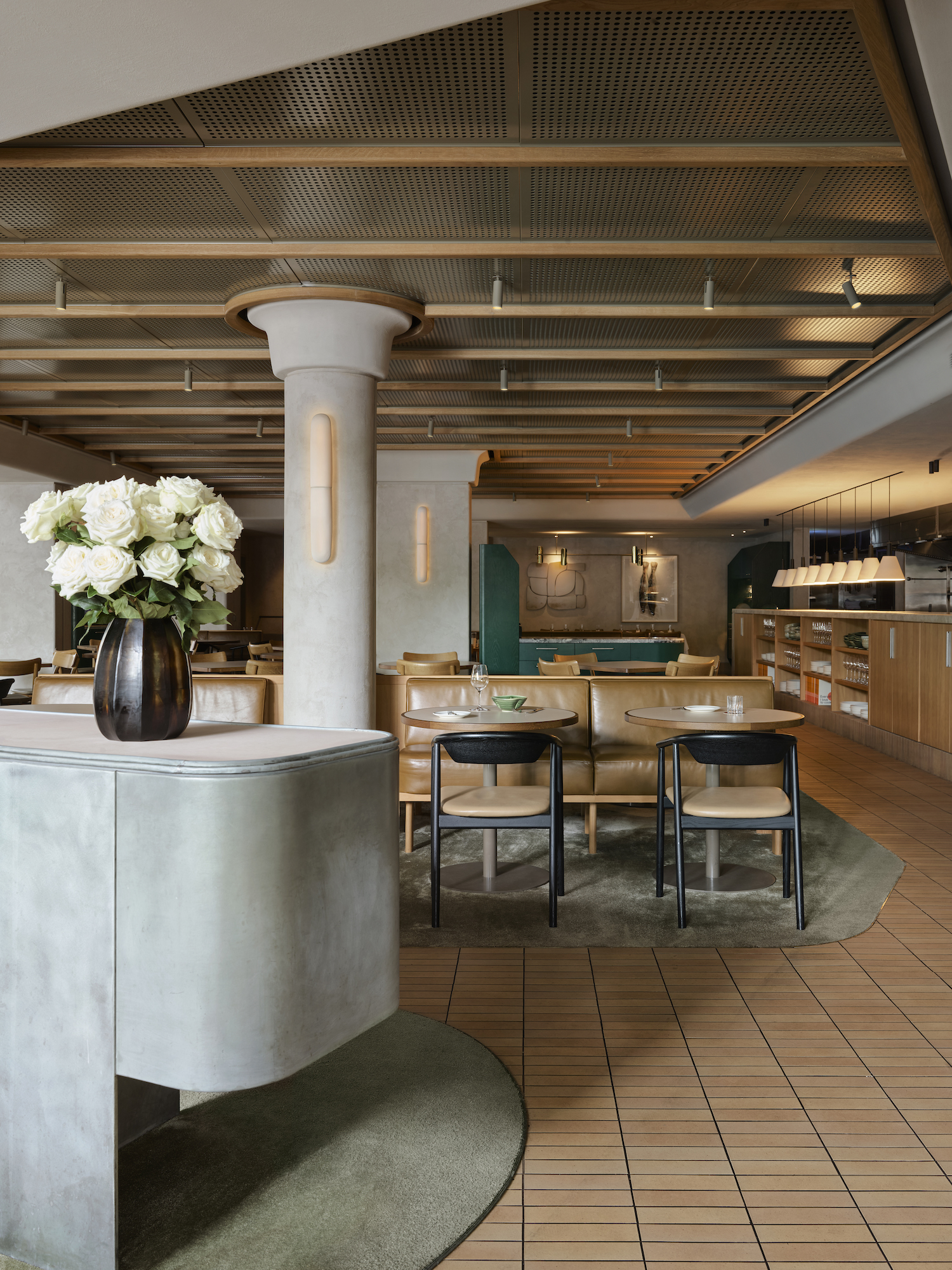 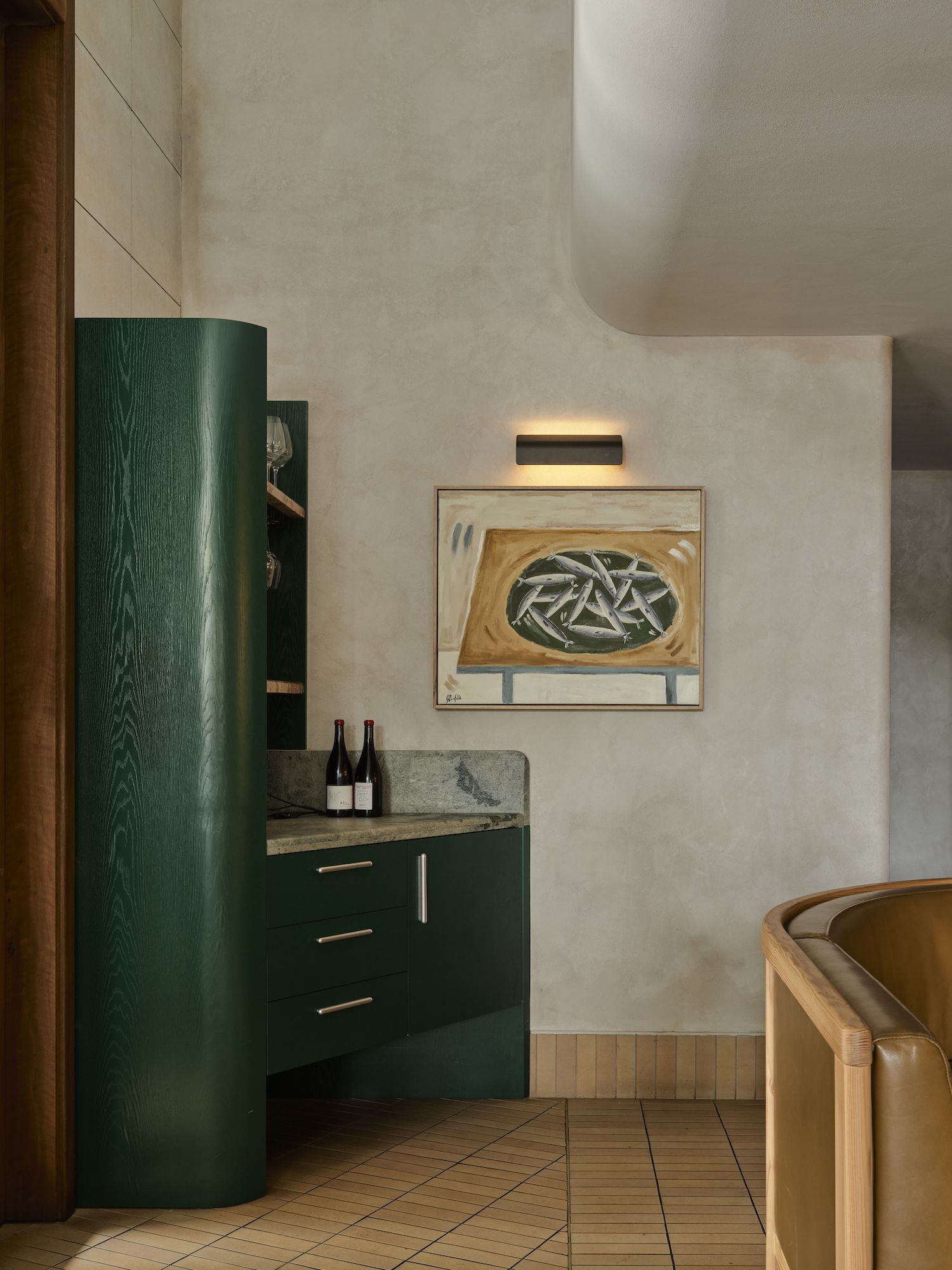 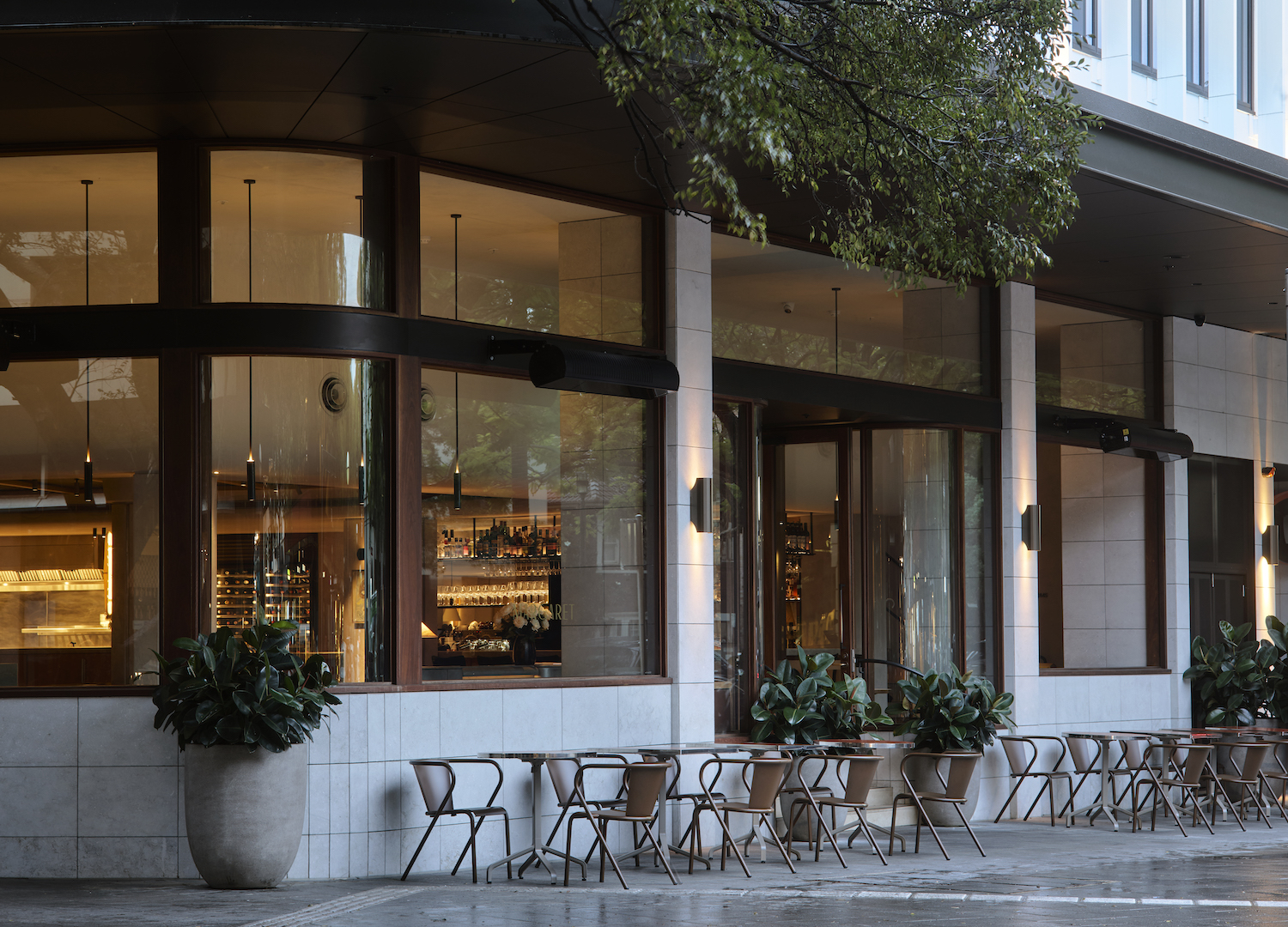 On one of Melbourne’s most renowned strips for Italian cuisine, Lygon Street, lies , an original take on an authentic pizzeria. Melbourne-based studio have approached the project with the local community in mind, considering the Brunswick context and feel and its connection to Italian culture and history. At the same time, they have strived to create something novel that does not try to be something else. “The goal was never to design the ‘next best thing’, but rather to go back to the basics and do them exceptionally well,” Ewert Leaf associate director Ana Calic says.

“The local Brunswick community inspired the design outcome and was an essential driver in the aesthetic of the space,” Ana says. The suburb’s long-standing population of working-class Greek and Italian migrant families has championed a culture of self-taught crafts and homegrown industries. As such, the “backyard workshop” inspired the material palette; patinated steel alongside raw and unrefined finishes, offset by warm timber veneers and soft ambient lighting.

Integrated niches and shelving showcase local wines, elevated by textured glass panels. The integration of earthy green tones evokes a sense of calm when juxtaposed against the raw steel and concrete elements. 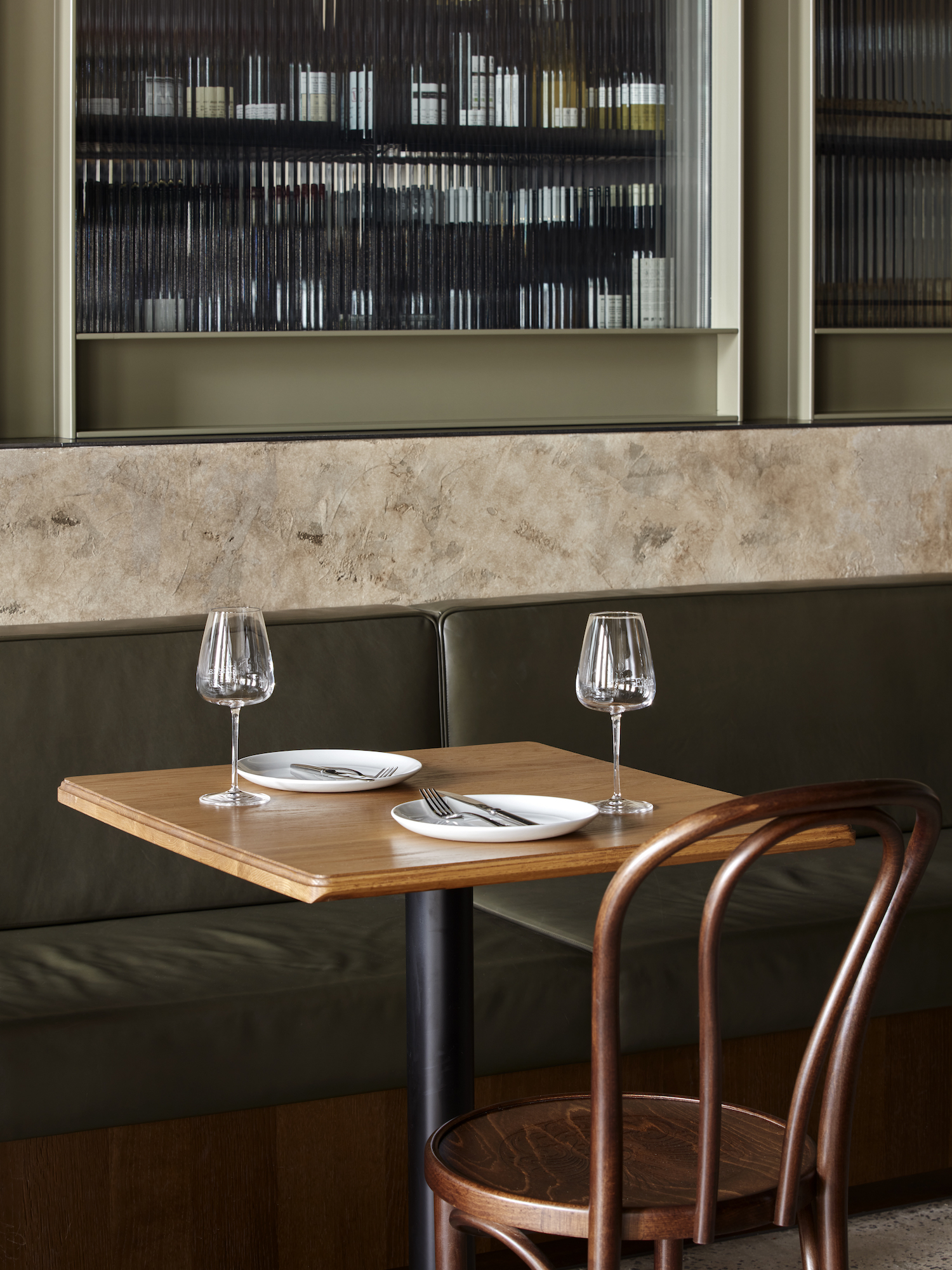 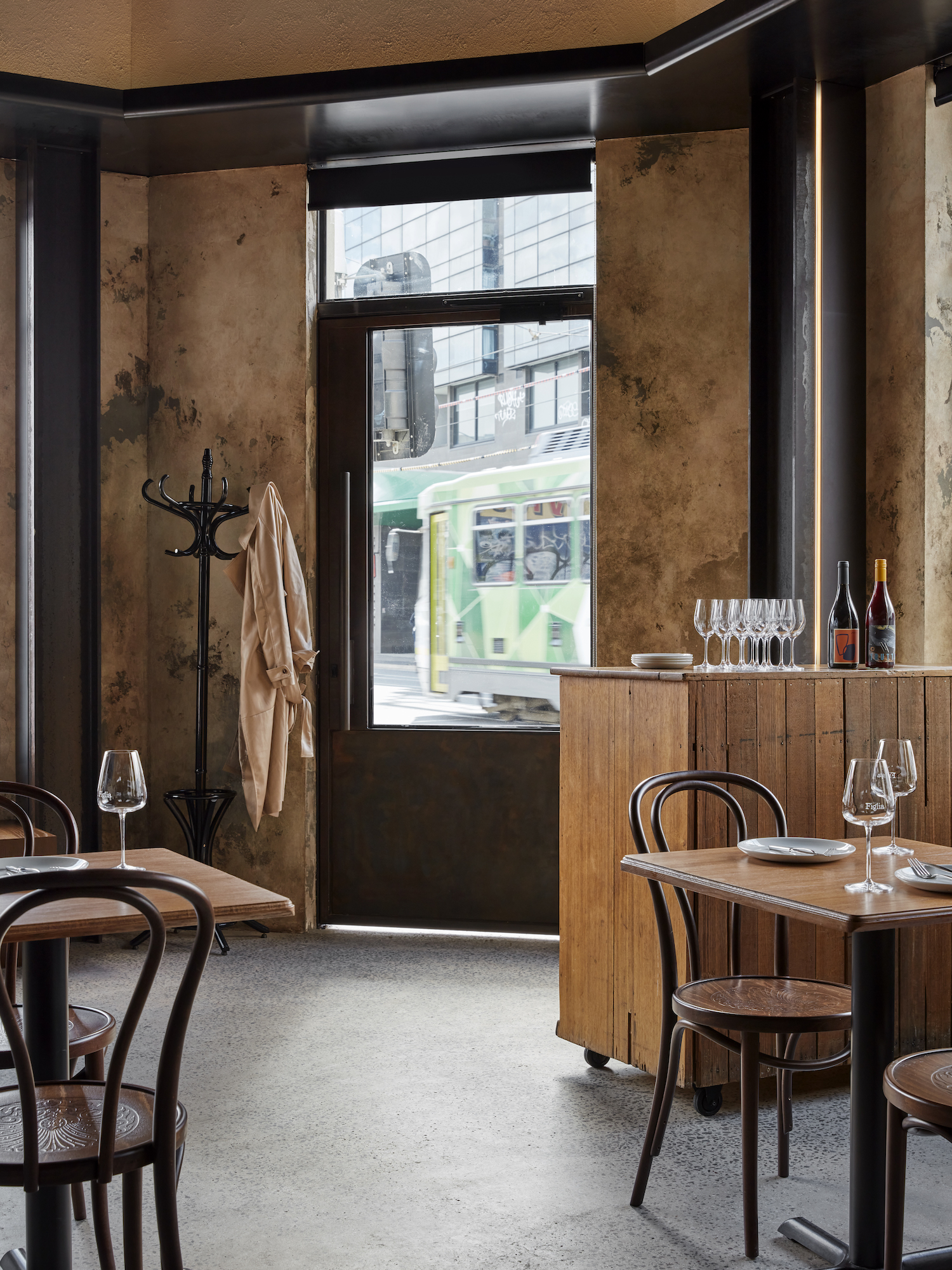