As our Architecture+Women NZ series continues, we’re joined by the boundary-pushing Raphaela Rose.

Raphaela, you graduated from the University of Auckland with a Master of Architecture in 2013 — did you immediately set out to make waves? I was fortunate to have several inspiring teachers at university, who really challenged me to view architecture through different lenses, moving beyond four walls and a roof. In one of my final crits at architecture school, I had a critic tell me I wasn’t making ‘real’ architecture, but rather than being put off by his comments — as I think he’d hoped I would be — it pushed me to test the boundaries further. It was pretty satisfying a few months later when I won the NZIA Student Design Award for the same project.

Having worked in large local practices including Jasmax and RTA, and at DHD in New York and for Susana Torre in Spain, what are you enjoying about being co-founder/director of smaller Ōtepoti/Dunedin collective AHHA Studio now? Probably the biggest difference is that I’m now responsible for my own company, and with that comes both the freedom to pursue the work I’m passionate about, but also the stresses of making such a practice financially viable. I feel very lucky that I began AHHA with three friends who’re like-minded in their pursuit of creating a built environment that puts people and the planet first, but not at the expense of financial feasibility. This ethos extends to how we run our practice — we want to enjoy what we do every day, and find a balance between work and life beyond it.

Your practice straddles architecture, design and art — what kinds of projects do you take on? When we first began AHHA, we were inspired by multidisciplinary UK design collective Assemble, who work across a variety of scales, typologies and practices, both making things and making things happen. This really resonated with us, because we all come from diverse backgrounds and recognise the power of architecture combining with other disciplines. AHHA was formed out of the belief that there had to be an alternative to the traditional model of commercial practice most commonly seen in New Zealand. We wanted to promote a work culture that was non-hierarchical and saw a team working collectively across every stage of a project. We deliver projects that aspire to triple bottom lines, being ecologically, socially and financially sustainable, putting people and place at the forefront of any design approach. We collaborate with artists, strategists, developers and consultants to push design across multiple disciplines, and produce unique, accessible, appropriate projects for the community and context in which they operate. 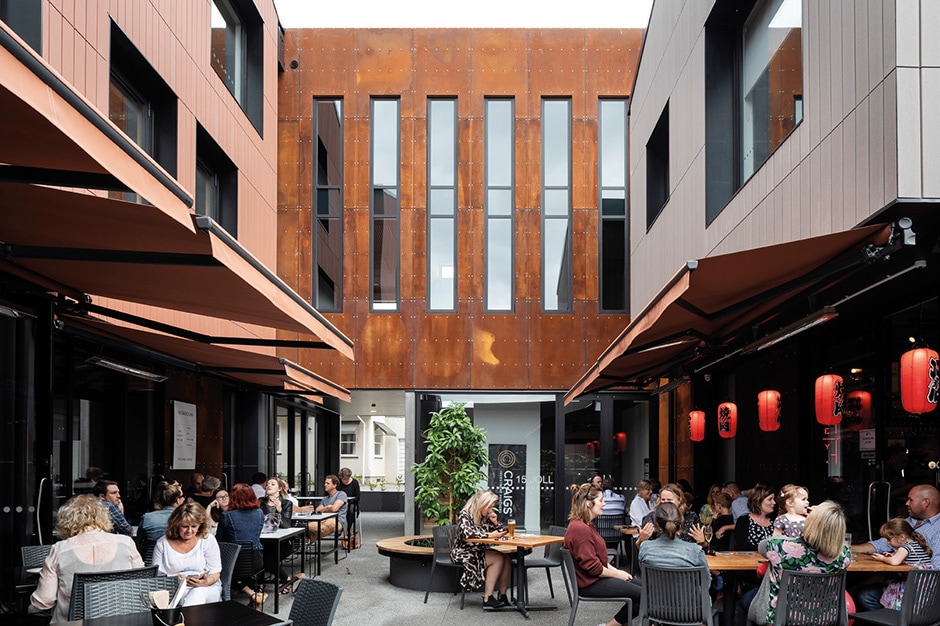 You’re also concerned about the social implications of space in relation to gender politics… Although seemingly subtle and often overlooked, there’s an inherent relationship between sexuality and space hidden within everyday practices that has led to the determination of only certain demographic groups being allowed access to the built environment. Through my work and research, I attempt to make visible the immaterial forces that have controlled our public and private spaces, and the consequential effects this has had on who has allowed to be active participants inour cities and political life.

Speaking of gender, this story is part of our Architecture+ Women NZ series — have you encountered any barriers to women succeeding in this profession? Unfortunately, senior positions in the architectural profession in New Zealand are still largely dominated by men, which becomes cyclic in its limitations to pulling women up. Unconscious bias is still a common occurrence in the industry; I was once taken off a project and replaced by a male colleague after the director assumed that as a man he’d have better computer skills than I have! Encounters like that have fuelled me to demonstrate my capability and foster a company in which unconscious bias isn’t tolerated, in the hopes we might influence the industry.

What’s the best professional advice you’ve ever received? To view collaboration as an exchange in which you give and take from each other in order to create something that’s revolutionary.

How do you hope the architecture, design and art worlds will evolve in 2022 and beyond? I think a positive coming out of the pandemic is that there’s been an acknowledgement of the importance of community and the power of human connection. My hope is that this will filter down into architecture, design and art in the form of housing developments that focus on collective living, projects that are brought together through collaboration rather than artists operating in isolation, and an interrogation of what didn’t work during the pandemic and how we can ensure through these disciplines that we don’t repeat the same mistakes.
;