Sue Waymouth was working in the front garden of the Herne Bay, Tāmaki Makaurau/Auckland villa she shares with her husband Ben and their here-again, gone-again teenage children when one of those unexpected slice-of-life moments landed in her everyday. The original owner of the home, a woman in her 80s, came by with her carer. “She told me how she kissed her first boyfriend beneath the camellia tree,” says Sue. It was just one of many charming recollections. “We’re only the third owners of this house; it’s been very loved.” 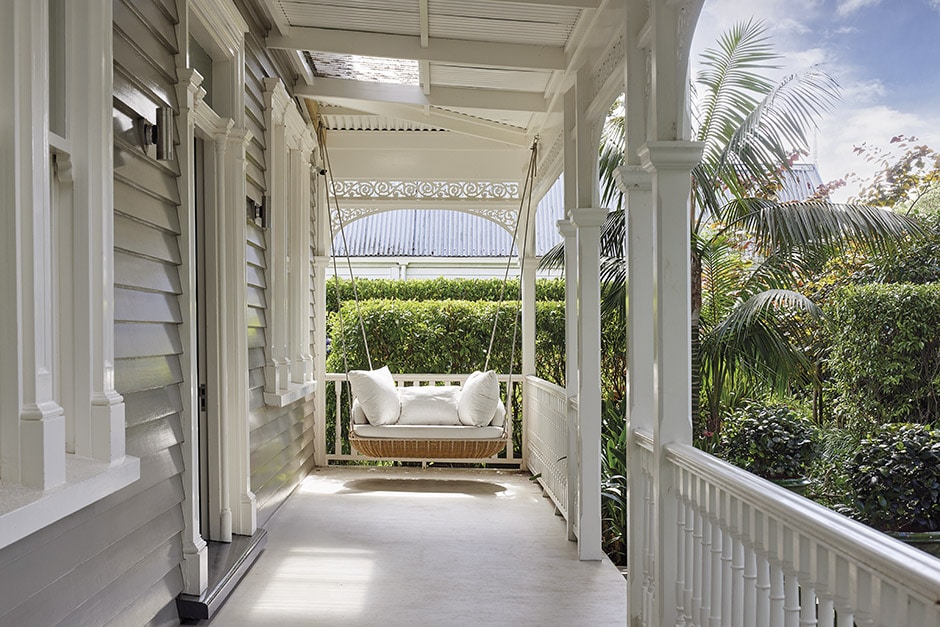 Architect Julian Guthrie describes the dwelling as a grand, very pretty villa. And it is. It sits in chocolate-box perfection on a 976m2 corner site beneath magnificent pōhutukawa. The entry courtyard is subtropical splendour, and the generous verandah sets up an expectation of gracious proportions.
“There’s a 3.6m stud to the original home,” says Julian. “It also had a wide hallway, ornate ceilings and kauri floors, but then out the back the scale compressed.” A ’90s renovation with a low ceiling had made the spaces feel, well, wrong. 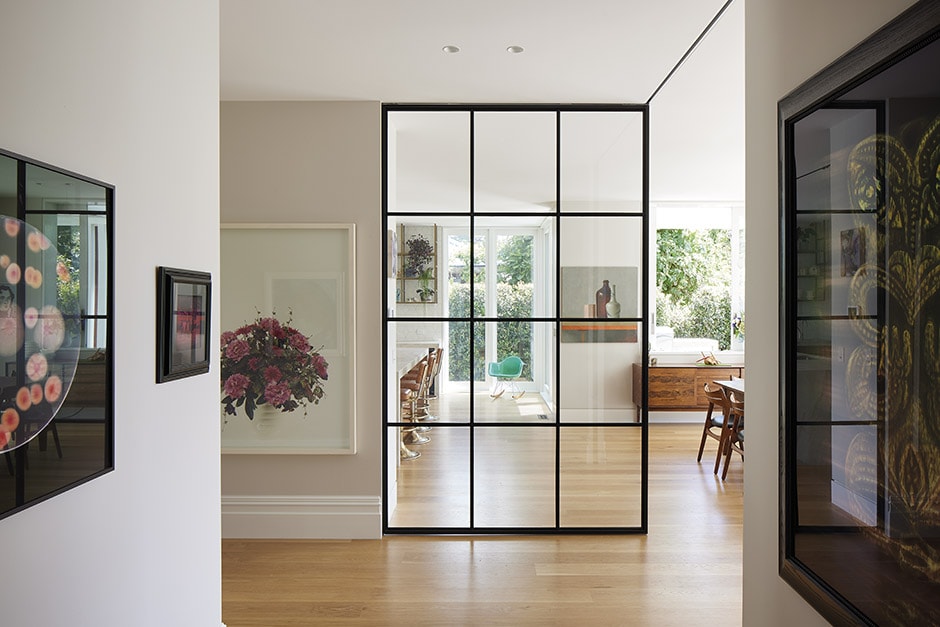 The family lived here for 10 years before the couple decided to tackle a renovation. Sue meeting Julian was a key driver. “He loves art like I do,” she says. “Our thinking and our taste were instantly in sync.”
They put their like minds together to alter the blue kitchen, relocate the main bedroom away from the public spaces, build upwards for an office in an eyrie and, most importantly, better connect the living zones with the existing pool. For Julian, this was about crafting transition spaces in between. “We effectively drew the house away from the pool by adding deep, covered verandahs to make these outdoor rooms more useable,” he says.

A glass-and-batten brise soleil allows gentle light to dapple through, glass fencing disappears into the backdrop and sliding doors peel back to the summer-glimmer of the water. “When we resurfaced the pool, we were initially going to go all French grey but were advised that it would look dark and uninviting, so I’m glad we added a bit of blue,” says Sue. 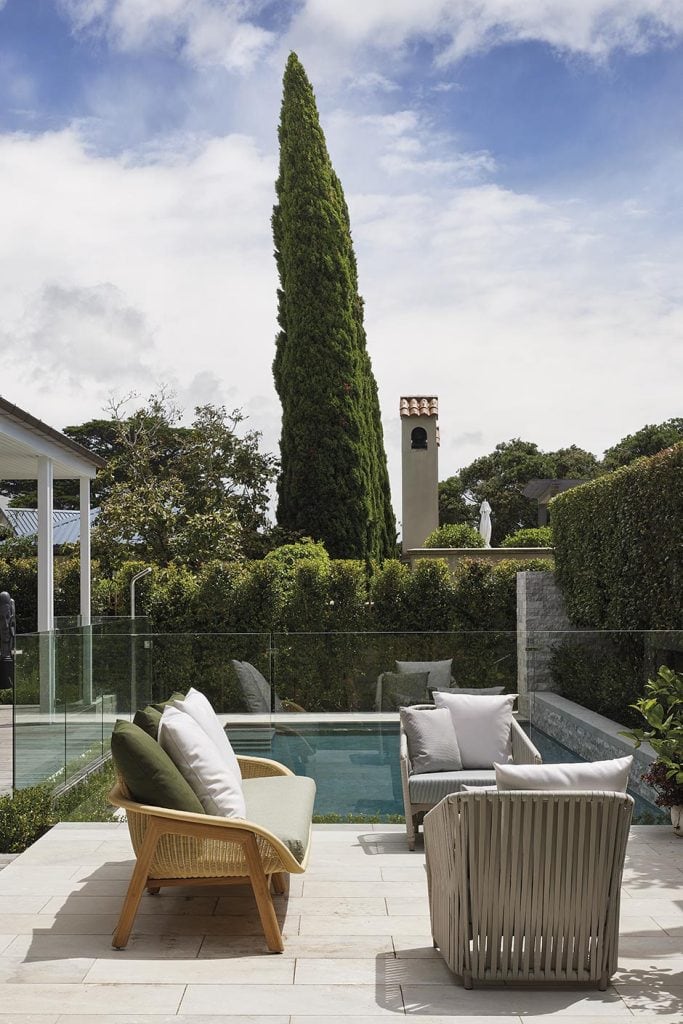 The family moved out for 18 months while Axiom Projects effected the changes, with Sue ever on hand to make the important decisions. “I’d be here two or three times a day,” she recalls. Not that she minded — she was in her element.
Sue, who has completed a course at the Nanette Cameron School of Interior Design and is currently undertaking postgraduate studies in art history at university, relished this real-life challenge. “I’m a very visual person,” she says. “I had scrapbooks of ideas for every room.”
She was involved, with Julian, in planning the kitchen, and found the honed, leathered Taj Mahal stone they used for the benches a year before kick-off. That inspired the colour scheme of warm walnut elements set into white floor-to-ceiling cabinetry. 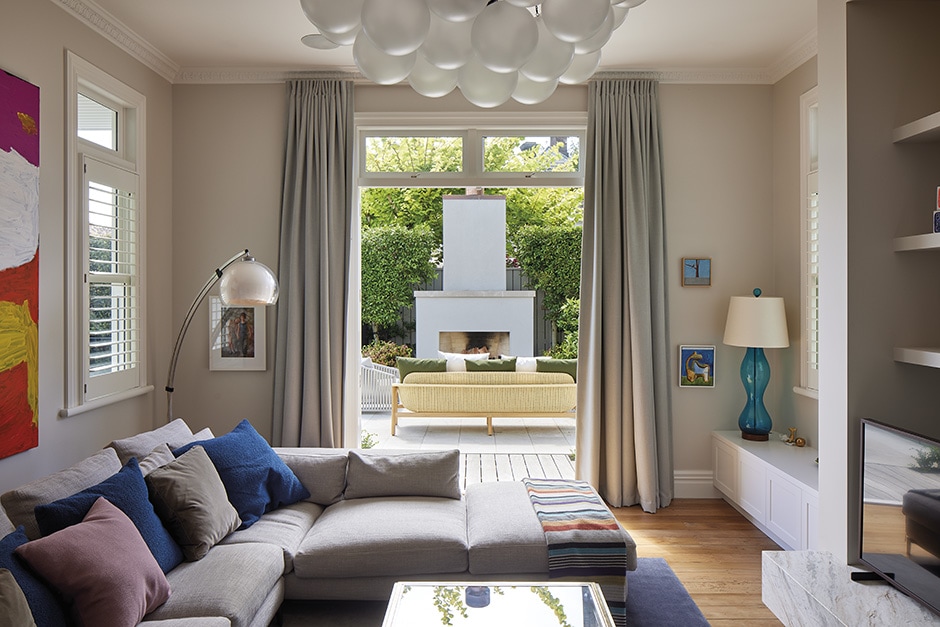 Together, they designed the large, four-part oval handles that are a standout feature. “I’m obsessed with curves,” admits Sue. When she spotted the 1970s swivelling bar stools in the window of Baran de Bordeaux while driving past one day, she shot inside like a bullet. “They come from a casino in Monte Carlo,” she says. “Ben wasn’t sure at first, but once he sat down, they were so comfortable, he relented.”
A mid-century influence is evident — cue the dining room sideboard and dining chairs — but there are antique pieces too, and clearly contemporary elements, such as the statement lighting that’s pure sculpture in suspension.

Such multi-layered influences draw the old and new together beautifully in this 1910 dwelling, where Sue and Ben now have their bedroom one level up overlooking the west garden, and there’s a new shared office at the top, which came in handy during the pandemic and gets a peep of the sea.
Julian widened the staircase here, adding a black steel balustrade to visually link with the Crittall-style doors, and sliders that separate the open-plan areas from the rest of the dwelling and divide off the more formal living room. It means that, when seated at the dining table, guests get an unimpeded view of the Ans Westra photograph of hydrangeas above the updated marble-front fireplace.

Pink tones tie in with the reupholstered mid-century bucket chairs here. Sue loves colour and has liberally sprinkled it around, including on the walls of the ‘winter room’ painted a teal blue, and in the furnishings such as the sofas reupholstered in purple hues, and bathroom flooring in green and blue.
It’s a passion only eclipsed by her ardour for art. “Every piece in this house has a story behind it, so we had to be mindful to ensure there was enough wall space and to filter the light that reached the interior in order to protect the art,” says Julian. 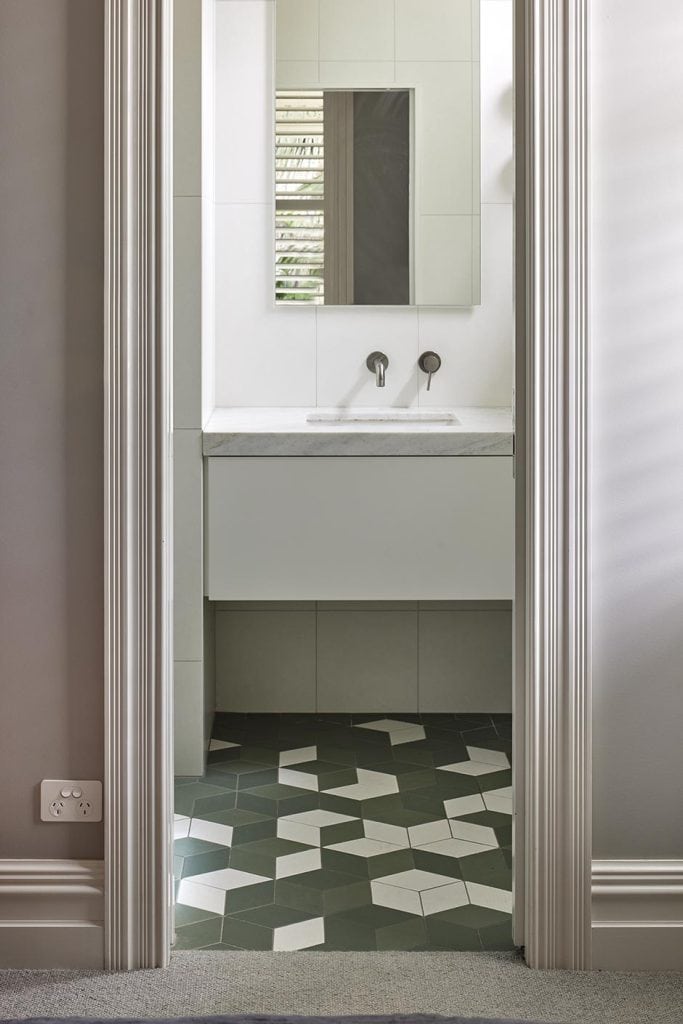 Sue, who’s co-chair of Auckland Art Gallery Toi o Tāmaki’s Contemporary Benefactors, is integral to this fundraising venture that supports artists and the gallery’s contemporary arts programme. She’s been a collector for years. “I buy pieces I love but I also do a lot of research, and I often get to meet the artists and hear what inspired them,” she says.
In every corner of this home, there’s an artwork, object or architectural detail to appreciate. It has a delightful history and is so easy to live in, but there’s another aspect that endears it to its owners. The two neighbouring properties were once occupied by painter Charles Goldie and his mother Maria Partington, an amateur artist. Somehow, you get the feeling they would have approved.