When now Melbourne-based architect Antony Martin was a teen in Tāmaki Makaurau/Auckland, he was good mates with celebrated architect Marshall Cook’s kids, and invited to their home in Parnell’s Brighton Road all the time.
“I used to have a second life around there, and it really stuck with me that when you went in through their front door, it was like a piazza, and all these living spaces looked down over it,” he says. “When it came to doing this house, it came into my mind how you could plan a house as urban planning rather than a floorplan.”
An artist and an economist/environmentalist, the owners are also good friends (and prior clients) of Antony’s, and one of their three teenagers is besties with one of his. And so it was, with past and present friendships as guides, that Antony came to design their home not as your usual house, but as a tiny town, the toast of which are the relationships nurtured within it. 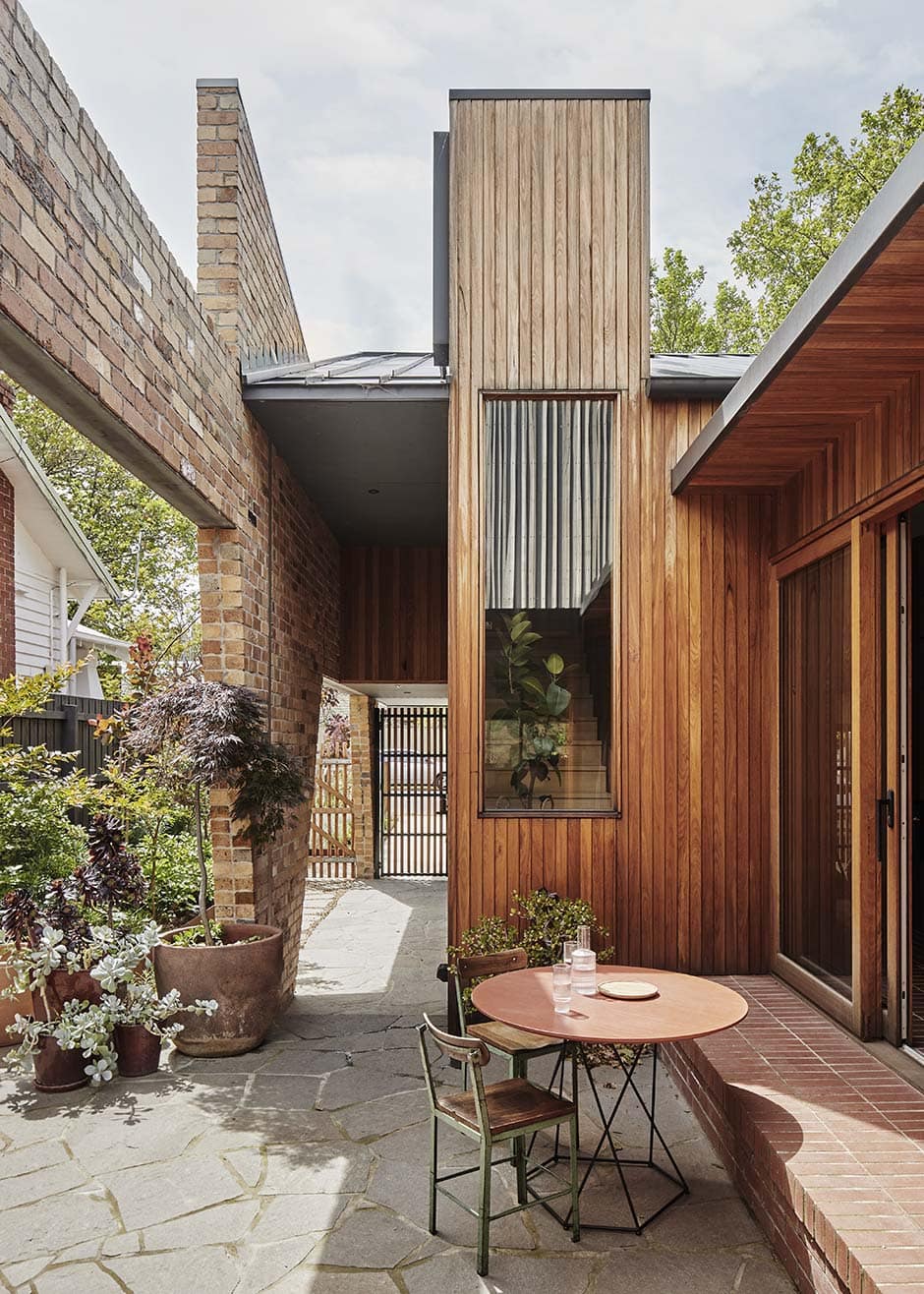 It took a village to work on this veritable village in Melbourne’s Westgarth, underpinned by Kiwi common ground, with Antony and the owners all from Aotearoa, and the project team including New Zealander Megan Norgate and her colleague Kelsey Dabinett of interior design studio Brave New Eco, and SBLA Landscape Architecture & Urban Design led by Simone Bliss, whose partner happens to be a Kiwi, “so she sneaks in on relationship grounds”, says Megan. 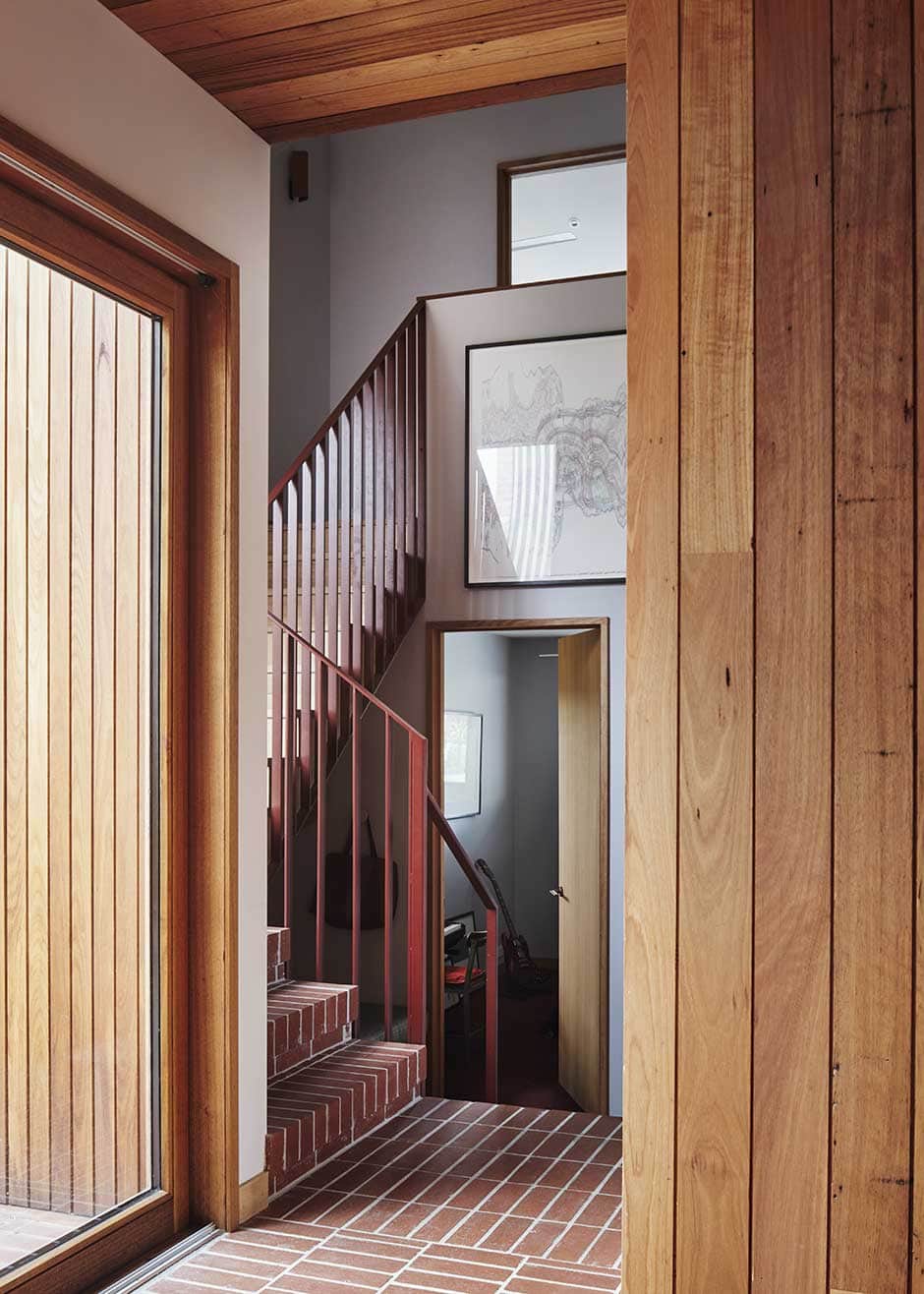 “It’s a bit of an expatriate club that we’ve got going on,” she continues. “I think there’s a down-to-earth utilitarianism Kiwis have that’s imbued in New Zealand’s local design community and based on a reframing of what lifestyle aspirations we value. This house was about accommodating the preferences of a growing-up family, where it’s more like five adults living in the space, who have their own unique needs with regards to sociability, privacy, noise…” 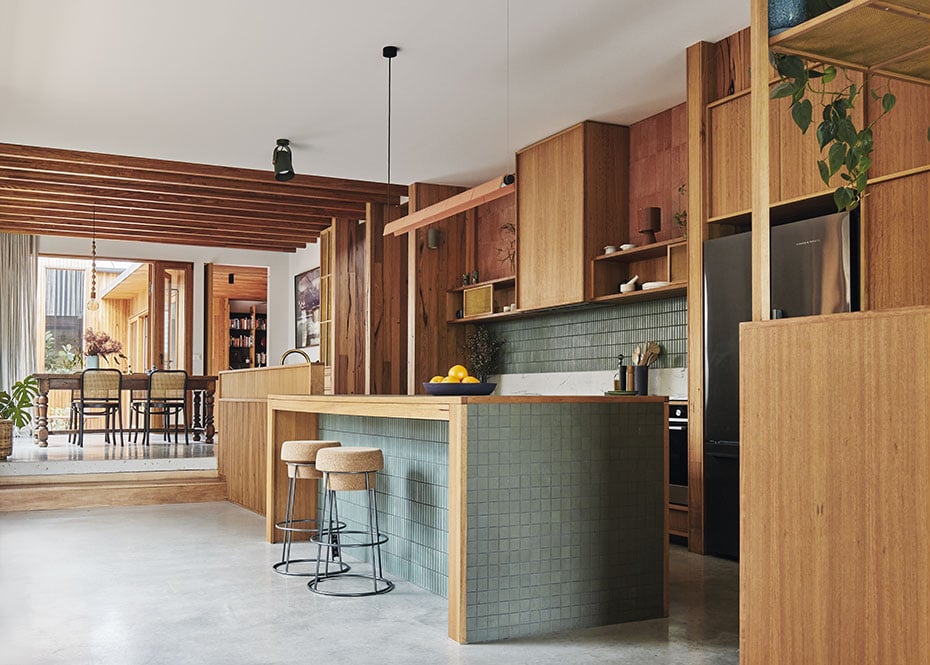 The singular new dwelling constructed by Lew Building meanders down a narrow section from the street to Merri Creek and its parkland on the rear border. Although the existing house on this section had been built in the 1960s, this is the site of the first European home in this suburb, so some sensitivity to that 1850s heritage was required. Courtesy of archival photographs used for reference, the new abode looks the part from the footpath, and Antony also honoured the past in a way you might not expect.
The original farmhouse faced north, and also predated the street network. “The interesting thing about that is that these days, it’s a knee-jerk reaction to orientate to the street and the rear garden,” says Antony. “But the long façade here faced north, and we wanted the house to face north. It has a more classic, gabled front-of-house elevation to it, although you can never stand back and look at that façade in its entirety.” 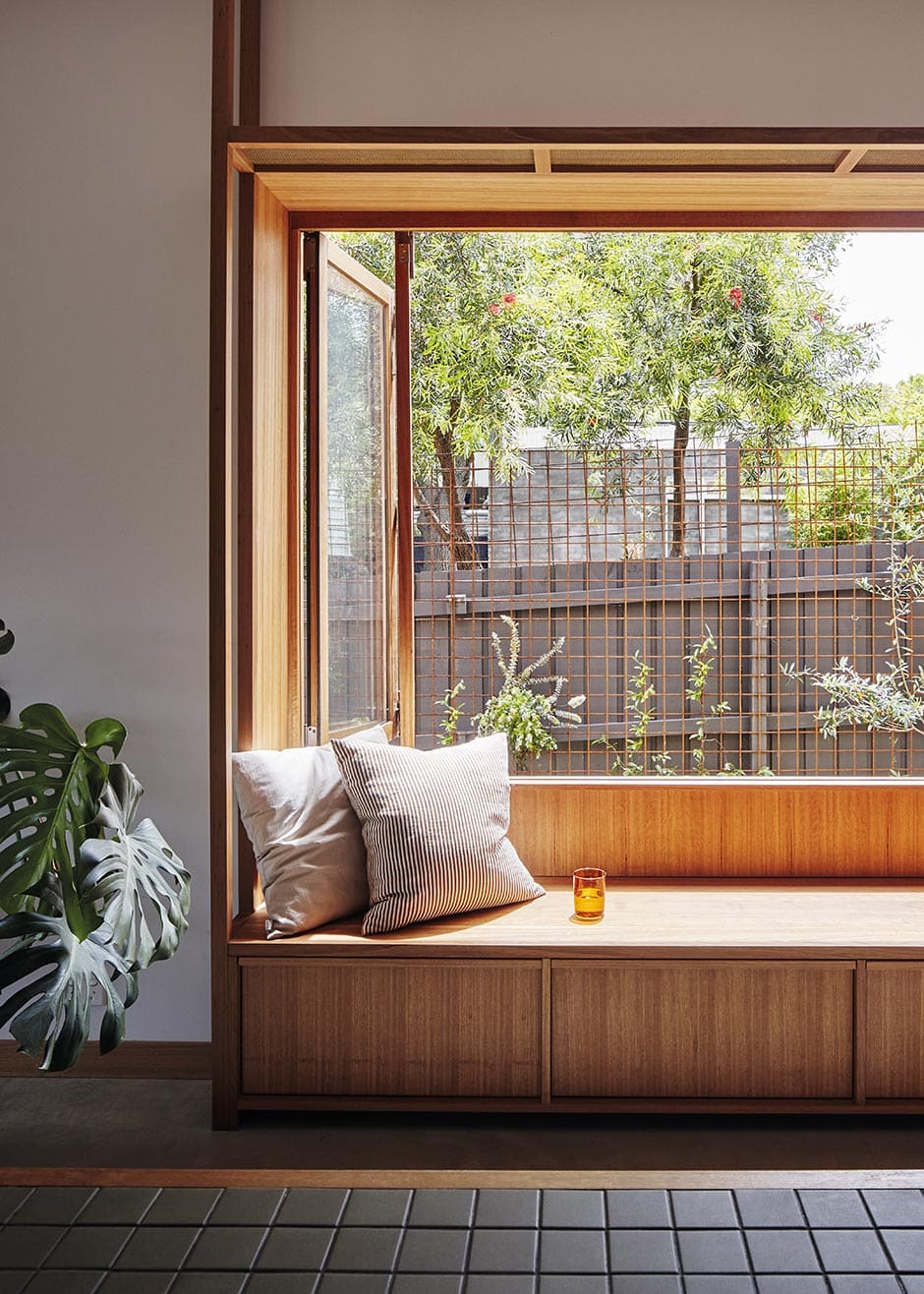 Running along the property’s east to west axis, the collection of connected buildings caters to the sociable family’s various private and public needs, while following the lay of the land. The streetfront structure houses the garage and a spare room designated for band practice, plus the two daughters’ bedrooms above that. Next, there’s a single-storey section — the ‘city square’ — comprising a communal work studio and an external courtyard. This leads to another two-storey section where the kitchen/dining/living areas sit alongside the son’s bedroom, with the main bedroom above them, then the home steps back down to a single-storey living area linking onto the pool and rear garden. Antony is very much an “anti-box architect”, and these cleverly arranged smaller spaces broken up by level changes and different ceiling and floor finishes each have a wonderful individual character. 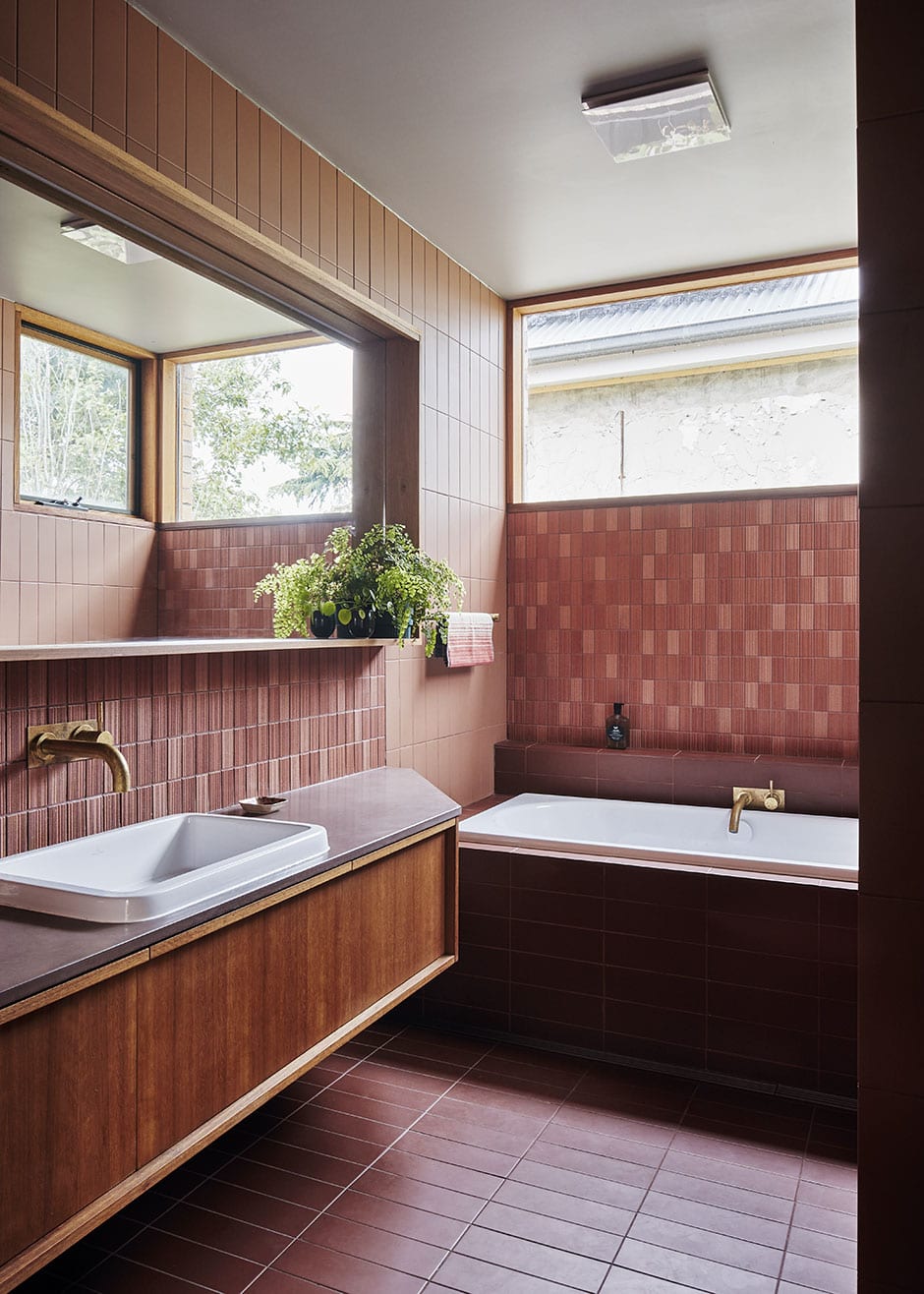 Dovetailing beautifully with the architecture are the interior elements Brave New Eco devised, including expanses of gorgeous timber joinery. “I wanted to use reoccurring materials that were durable, textured and responsive to Ant’s architectural materials,” says Megan. “The clients have a big appetite for colour, so we embedded the colour in the materiality, with lots of warmth and earthiness. We worked in detail with the way they like to use the kitchen and the locations they keep things in throughout the house, making sure every item has a specific home — so much so that if I visited now, I could find the dog food, the tongs and a bottle of wine without thinking!

“They also wanted a future-ready home that didn’t use any fossil fuels, so no effort was spared on Ant’s part to use the best electric technologies and a whopping solar system to capture Australia’s plentiful sunshine,” she continues. Sustainability was a must for all materials and passive design principles led the way, so as well as the solar array on the roof, the concrete and brick flooring provides thermal mass, high-performance windows and the northern orientation harness the sun for thermal gain and natural light, and rainwater is collected off the roof for the laundry, toilets and garden. 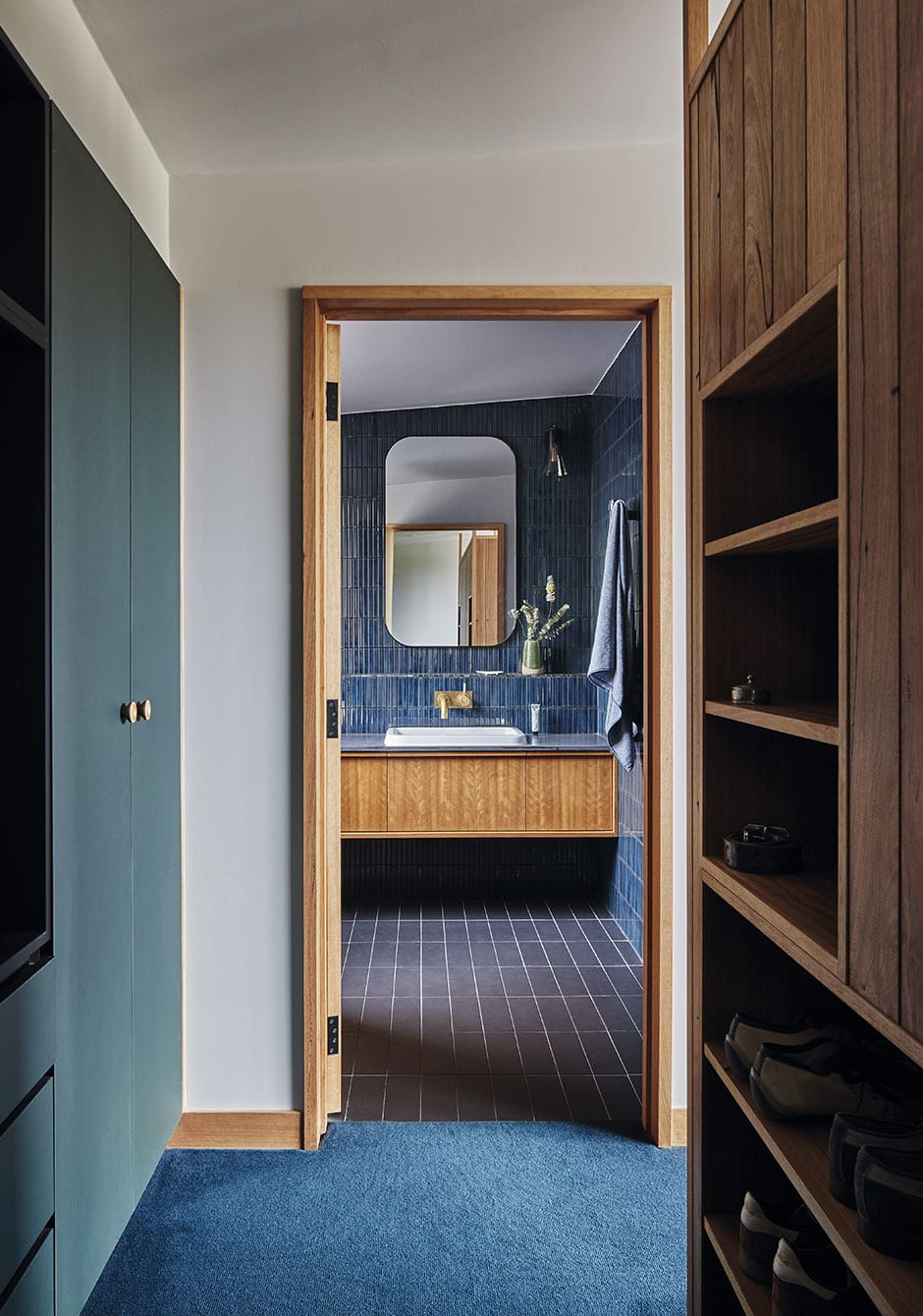 Airy and leafy, yet grounded and cocooning, “this is a real kind of country house, but you can still see the city,” says Antony. “It’s a fantastic feeling of being surrounded by green and you also have an awareness of that body of water down there.”
Indeed. Despite those Kiwi connections, Antony adds that there’s one regular reminder they’re not in New Zealand now. “There’s a snake alert that goes on among the properties backing onto the creek. If someone notices there’s a snake travelling through, they send a text to let everyone know!”

Apart from reptiles, everyone’s welcome at this address. “They wanted to create a home with an open-door policy, which again was very much how I experienced Marsh Cook’s house as a teenager — everyone used to be there,” says Antony. “Now that’s the experience I have when I go round to this house.” 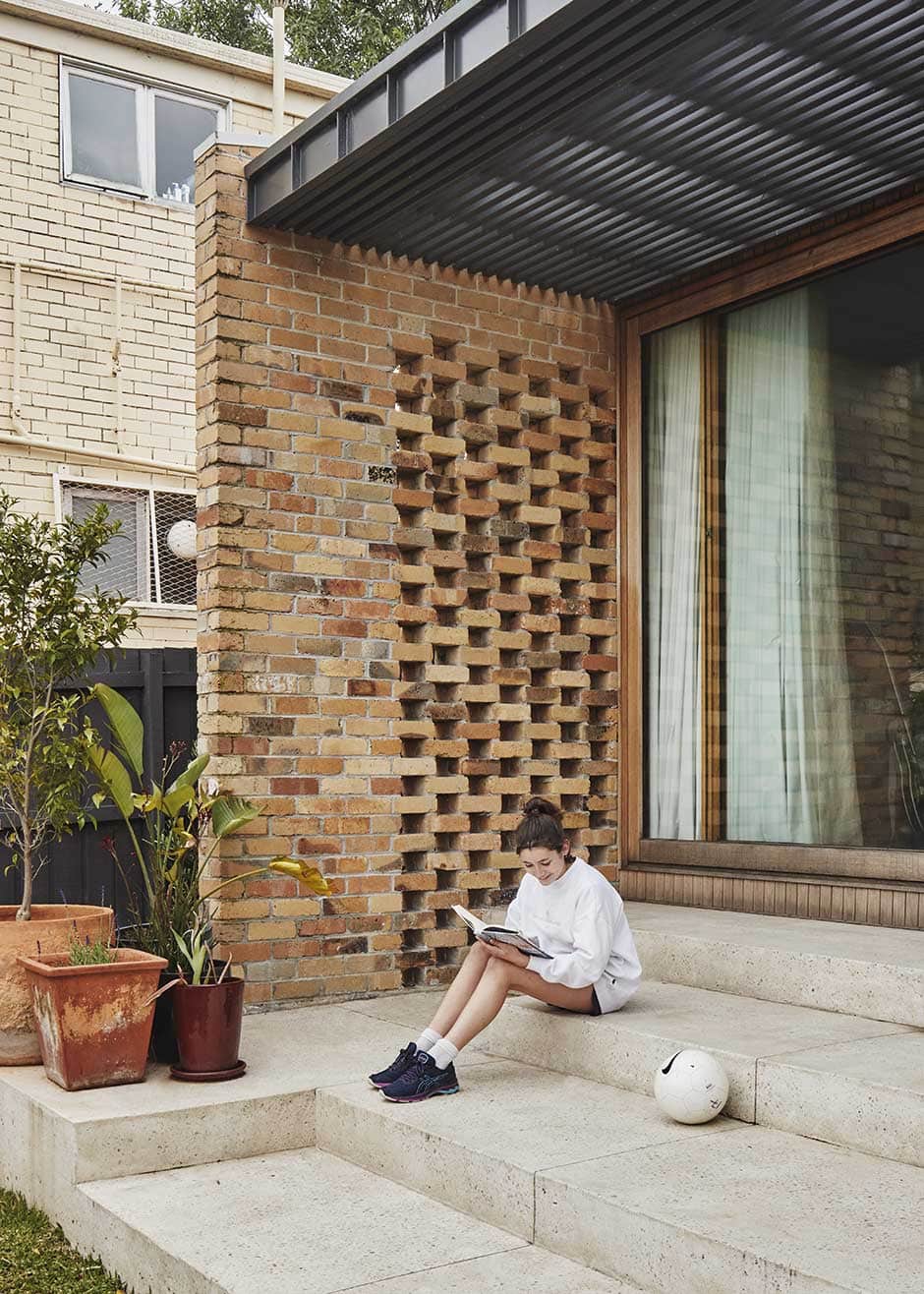 Antony says his friends are “more themselves” here. “It’s been amazing to see them in this space tailored for them. I think that’s the thing about us. Architecture’s not just styling and aesthetics, but how we design our spaces to suit the people we are. We’re extroverted and introverted at certain times, and this house can accommodate both.”