Because we want to bring you absolutely everything this creative couple had to tell us, below is a bonus extended version of the story that appears in our December/January 2023 issue.

Under the moniker Kemi Niko, the studio they founded a decade ago, creative couple Kemi Whitwell (Ngāi Tahu) and Niko Leyden take on all kinds of projects, including turning waste wood and tin cans into their nifty collectable Mini Huts that replicate iconic ones in Aotearoa’s bush and national parks. From the moment their partnership began, it’s been underpinned by a shared ethos that deeply affirms why they do what they do: for the joy and adventure of art. 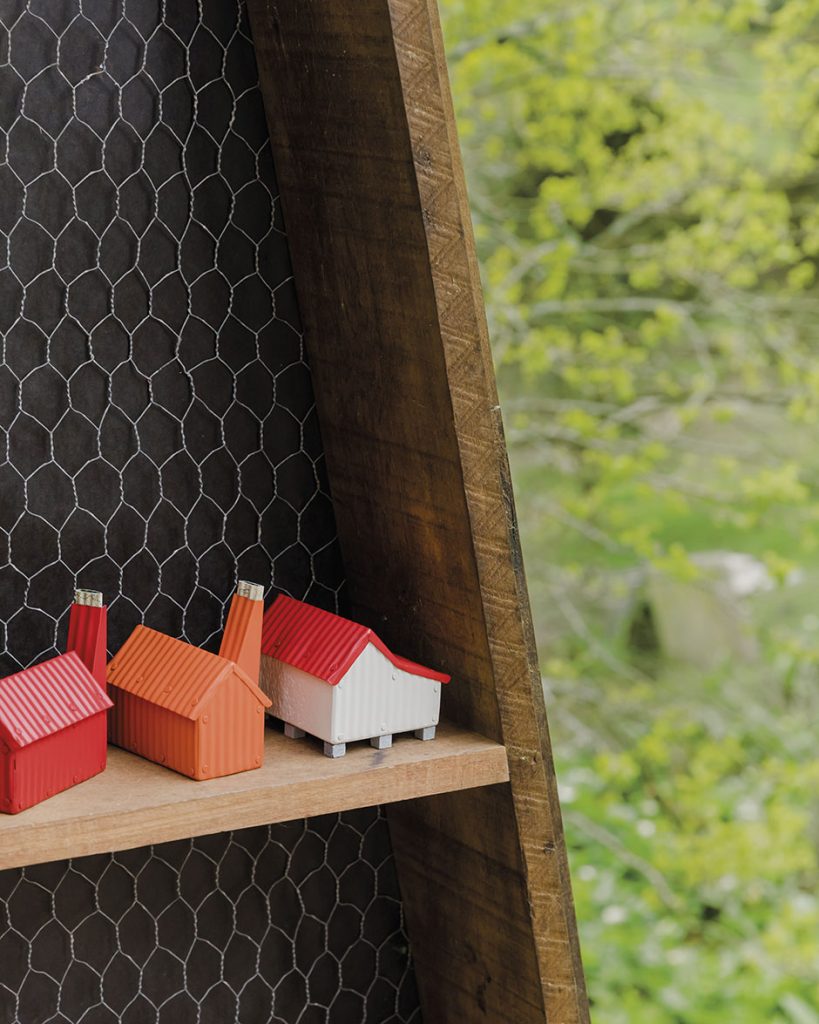 So how and when did you two get together? Niko: We met as flatmates studying in Wellington in 2009 — Kemi was doing fine arts and I was at the design school. After a couple of years being aware of each other, I offered to help Kemi install his first solo show. It was an epic undertaking as we filled Enjoy gallery with an immersive cave-like installation built from wheat-pasted cardboard. That’s when we really got to know each other.
Kemi: I couldn’t have pulled it off without her. Working together was so easeful and during the many all-nighters we realised that our vision of what kind of life we wanted aligned. Getting together just made sense.
Niko: Now we feel secure about telling people we’re artists who make huts for a living. Our core values remain; we still use salvaged materials, letting them dictate what we create as the first part of the design process. That will never change. 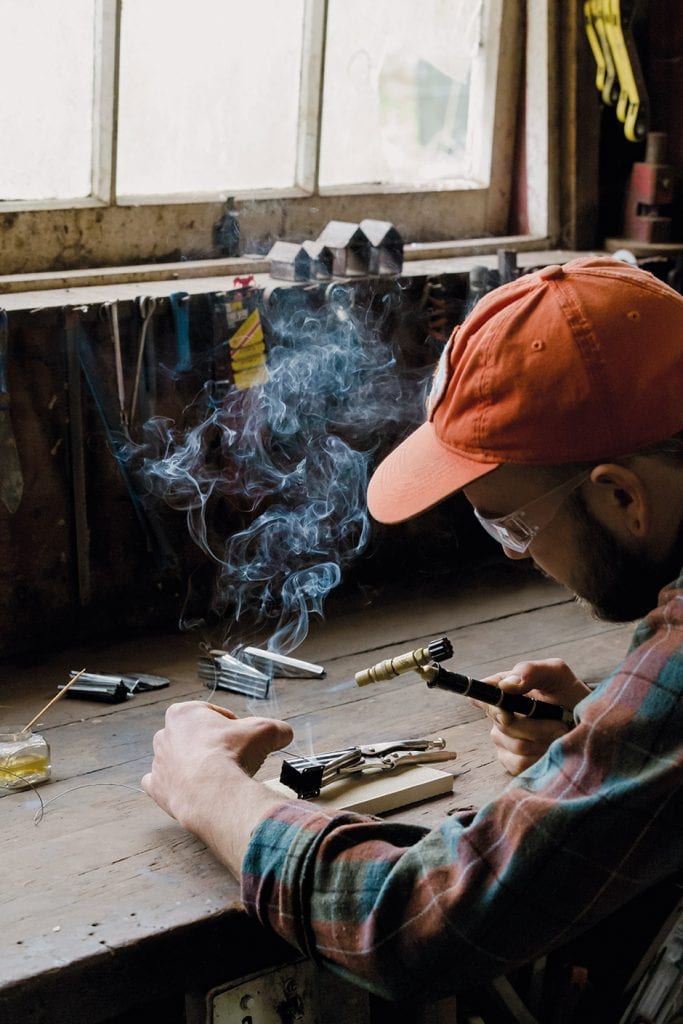 What strengths do each of you bring to your work? Niko: Kemi is a natural maker with an incredible range of skills and knowledge. He’s always had a deep appreciation for the Aotearoa vernacular and a tireless drive to use that knowledge to create new perspectives.
Kemi: Niko is as much a part of the design process as I am, I’m just the making muscle. She keeps me and the business on track and has the communication skills I sometimes lack. Amazingly, she puts everything together while also wrangling much of the domestic stuff.

Have you sussed out a hack to help you juggle the professional with the personal, including parenting your two daughters Rhea (6) and Jade (1)? Niko: The struggle is real all right. The key is having multiple other spaces to occupy, whether outdoors or in a big workshop like the one we’re fortunate to have inherited from my grandfather. Having good work-life balance has been integral since day one, so when the kids came along, we just adjusted the flow.
Kemi: From the beginning, we’ve placed equal value on each other’s time. Working in a husband-and-wife team is always going to be challenging but putting everything under our shared name helps. It’s important to acknowledge how hard both of us are working and to prioritise rest. 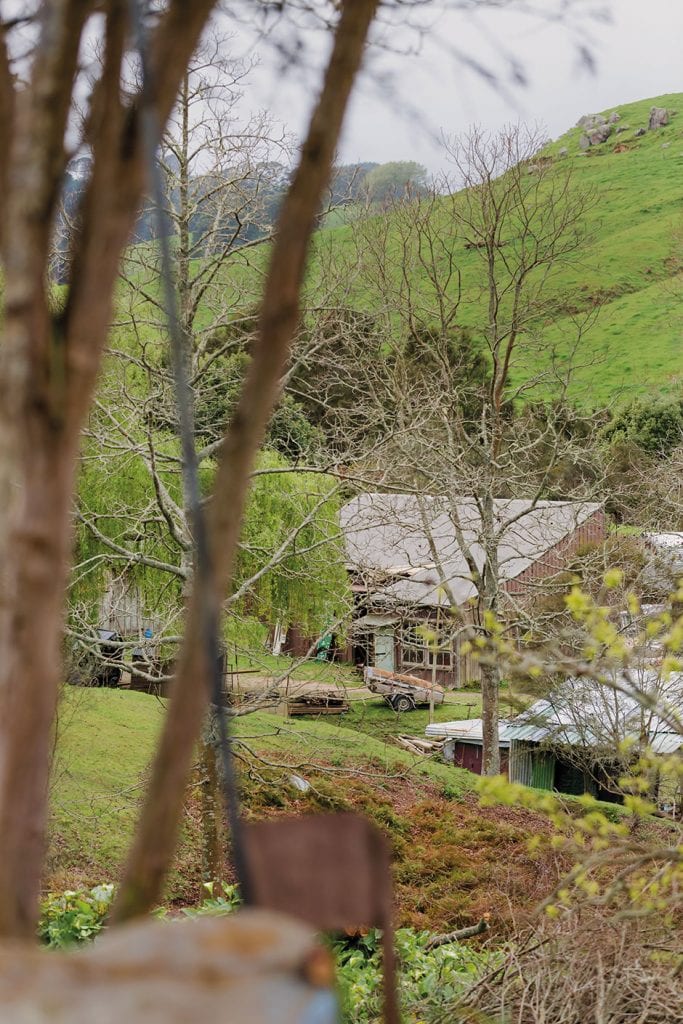 Your ‘travelling studio’ is currently based on Niko’s family property, Penpyddle, in the Waikato — how long have you lived there for? Niko: In 2019, after eight years working from our home studio in Wellington, we decided to live and work nomadically for a time. We went between housesits and friends’ huts on the West Coast and near family in Kāpiti for a year before the opportunity to move onto my grandparents’ property in Wharepapa South came up.
Kemi: Initially, we didn’t know how long we’d stay, but it’s been almost three years now and although rural, multigenerational living has its challenges, it has given us the space and time to clarify what we want to focus our efforts on. There’s a generous community here and a tiny rural school that we all adore.

While living in the house Niko’s grandparents built in the ’70s, you’re building a tiny house here — how’s that going? Kemi: With everything else on our plate, building SlowPoke is slow going, but we prefer it that way. We’re making every part from scratch, so the more time we have to ponder and experiment the better. We salvaged and gathered most of the materials, including the timber and glass in the windows we built, so that all takes time.
Niko: Even though SlowPoke’s interior is far from finished, we’ve recently started using it as an office and play space. 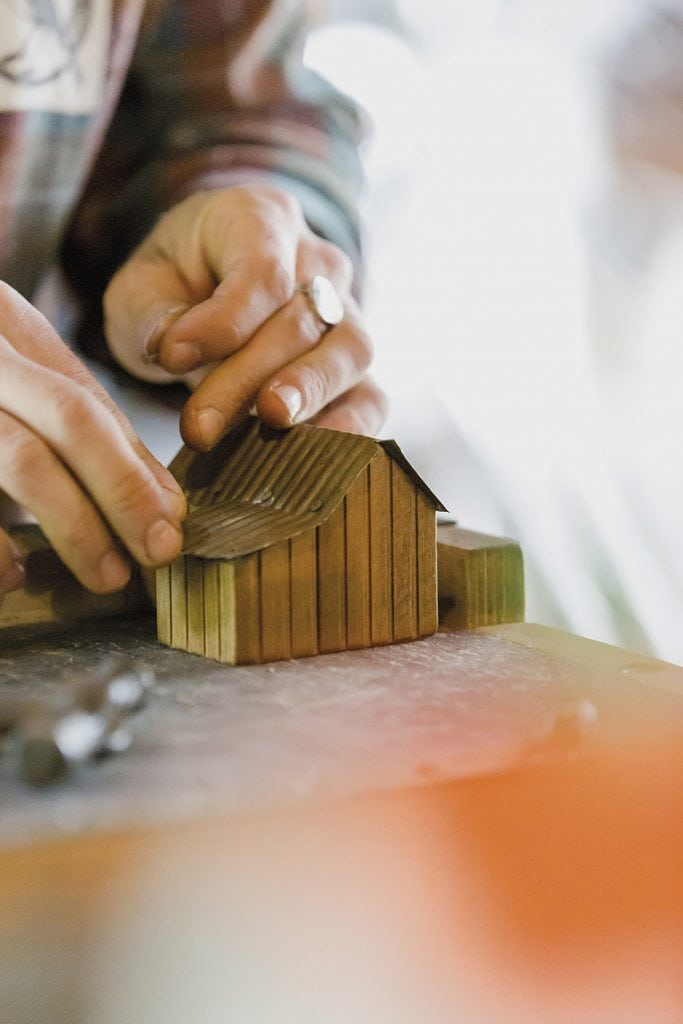 What’s cool about small-space living? Kemi: We’ve always liked living in huts and small spaces as it forces you to be more intentional with your possessions and your time. There isn’t as far to walk and you tend to clean as you go, for example.
Niko: Building it ourselves means the kids can have more of a say too. We’re incorporating climbing and play into the interior fitout. The kids want to hang out where we are anyway, so designing a space fit for everyone’s needs makes life easier. 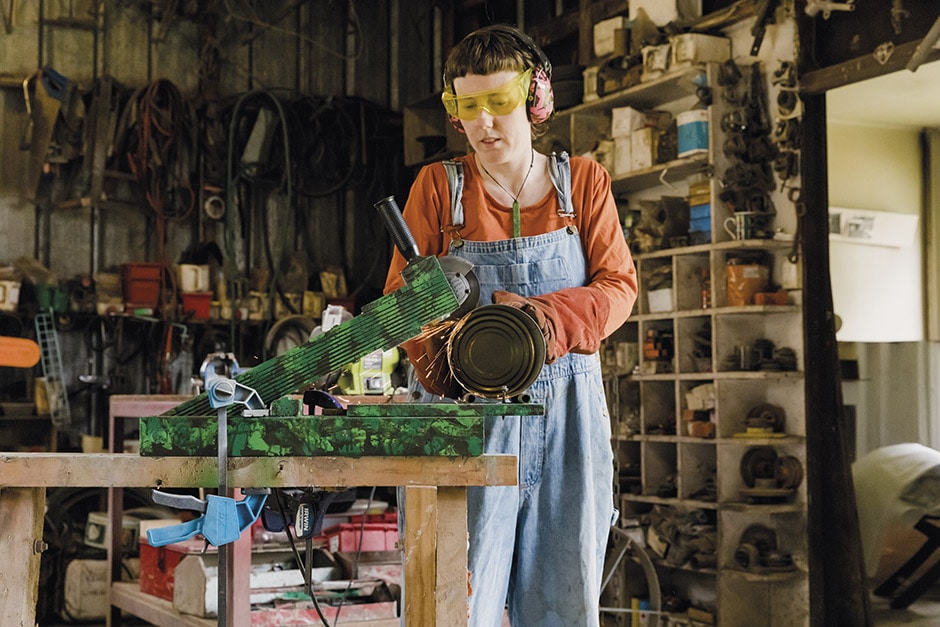 What else are you cultivating on this land? Kemi: I’ve just started a big vegetable garden. We try not to go into town too often, so growing food is essential. We’re lucky to have well-established trees, even with all the extra labour they require. There’s an overgrown orchard and plenty of timber and firewood trees.
Niko: Penpyddle is an idyllic place. It’s not huge by rural standards. It started as a barren, cattle-rutted gully when my grandparents bought it and we want to continue with their reforestation efforts. It’s a huge job though — we really need some community support to eradicate all the invasive species and restore the wetland.

Of course, you’re also using waste wood and tin cans to build your Mini Huts — what’s the story behind them?Kemi: We were both working at Fidel’s Café on Cuba Street and started taking the empty tin cans home to see what we could make from them. Flattened out, they look like miniature corrugated iron, which inevitably led to the idea of making mini tramping huts.
Niko: We’ve basically come up with a way of processing a material that pioneering hut builders would often use. We love that our Mini Huts populate homes and the fact we are not generating new waste makes that possible.

Where do you source your salvaged materials from and what values drive that process for you? Niko: We collect tin cans from a café in Te Awamutu and get 2×4 offcuts from building sites. We’re always on the lookout for new sources of waste materials and have recently started contacting businesses about accessing their usable excess. The other day, we scored some old fishing nets from a company in Nelson that we’ll turn into canopy nets for SlowPoke.
Kemi: ‘All materials salvaged’ is one of the core values of our studio — originally because we were poor students, but when we realised how much waste is out there, it felt irrational to buy new. Over the years we’ve discovered many sources of useable ‘junk’; recycling centres are great, of course, and we encourage everyone to visit their local tip shop! Over time, people in our community have realised our habits and we often get offers to pick things up. We’ve rescued the aluminium skins of vintage caravans, collected wood from derelicts, even used ocean plastic from beach cleans.

Each hut comes with a map hidden in its chimney — where will they take us? Kemi: Each Mini Hut is inspired by a real hut, so having each hut’s info is important to telling that story. We don’t want to have printed boxes or anything like that, so we came up with this small corrugated card that has a map and short text.
Niko: Most huts have chimneys, so it makes sense to slip the map in there, but it gets tricky with huts with no chimneys, so we use a paper ribbon for them. We basically want our packaging to be as low waste as possible.

You’re illustrators too — what work have you done lately? Kemi: The last contract we had was for an equal-pay campaign for early childhood educators. There’s something so satisfying about creating thoughtful illustrations that concisely communicate an essential idea.
Niko: We love graphic design and drawing, and have done some awesome work for companies and causes that align with our values. We got to do the latest Green Party merchandise, which was a dream job that just keeps on giving. How cool that our illustrations are on the world’s first political underwear!

You also work on lots of public art projects and exhibitions… Kemi: We make art that sits out in nature and enhances the experience of being outdoors in spaces cared for by kaitiaki [custodians] and community groups. I often want to touch artworks, so we figured we should make art that’s interactive. Our biggest project to date was for the 2020 Aotearoa New Zealand Festival of the Arts. We built five small huts in parks along the Kāpiti Coast from salvaged materials. Some of them are still there.
Niko: It was another dream project. Bret McKenzie saw our potential and the Festival took a chance on us, to great success. They say never meet your idols, but Bret could never disappoint. We’ve been inspired by what he and Taika Waititi and their Wellington peers did for the city and the world — it gave us confidence to try ourselves.

What other kinds of projects can people commission you to work on? Kemi: We’re working up to offering commissions of specific tramping huts that people treasure, in a larger scale than the Mini Huts. It’s the range we’re calling Bigatures that we’ve just started developing, and they’re sturdy enough to potentially outlive their namesakes. For now, we’re making the huts that inspire us the most. The first, Bealey Spur Hut [a replica of the hut in Arthur’s Pass National Park], is going to be displayed in the Henry Trading window space in Lyttleton this summer.
Niko: We love getting commissions from reserve groups or sanctuaries who have some budget for us to create custom ‘hutworks’ for their section of bush. We did an awesome permanent installation for Ngā Manu Nature Reserve in Waikanae last summer, where we created hut-based interpretations of native species and hid them throughout the bushwalk. It’s definitely worth checking out. 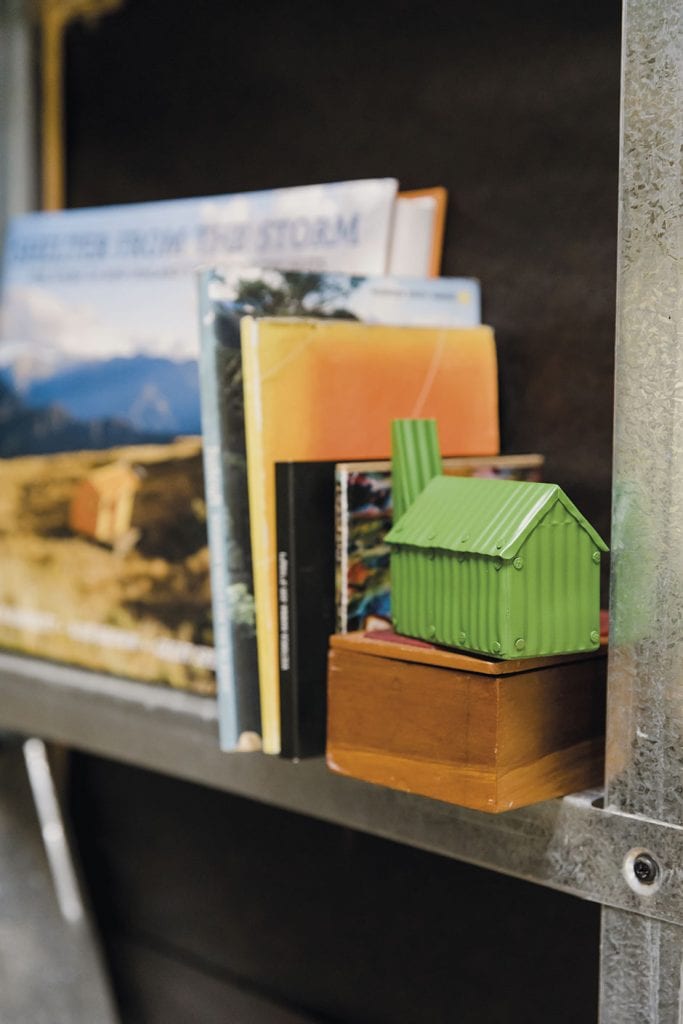 You’re big on tramping — what do you love most about it? Kemi: To us, staying in a tramping hut is almost medicine. To be able to go into relative wilderness and sleep comfortably overnight feels incredibly special and unique. It’s our idea of church.
Niko: It’s hard to find the time to go tramping these days, but we’ve been trying to get out more. We’re always on the lookout for local walks with huts close to a road end. Having your gear ready to go helps, as packing is definitely the worst part. It doesn’t need to be flash either — most of our gear is from op shops or borrowed. Work with what you have. 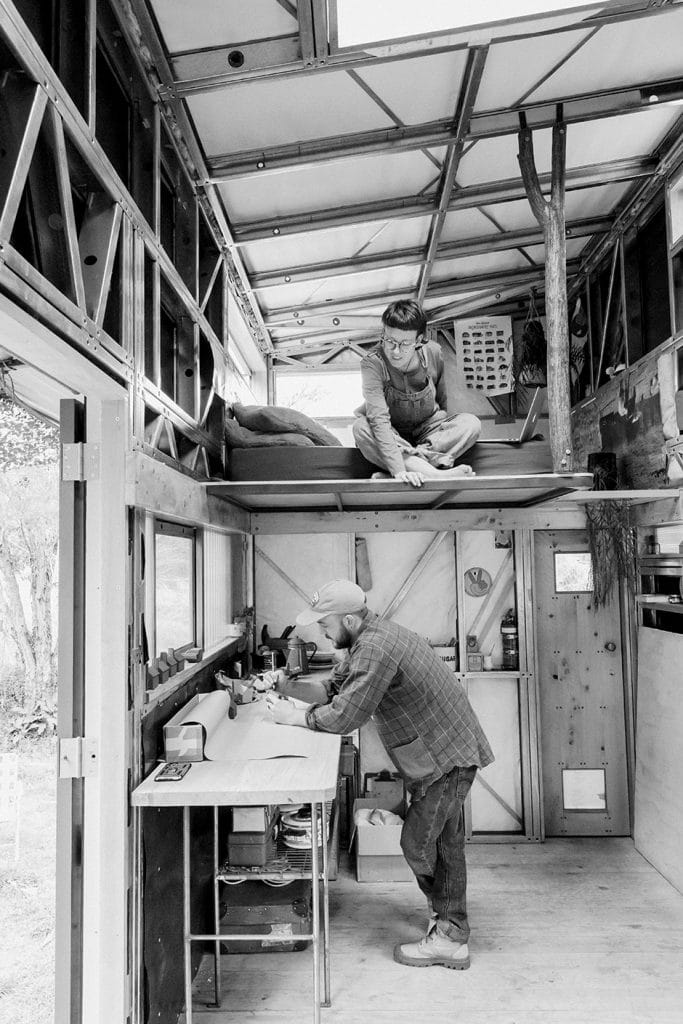 What are some of the other habits or hobbies that keep you happy and creatively motivated? Niko: Tramping really is the main thing that boosts our creativity. Every time we finally get out there we get flooded with inspiration. Any problems we’re struggling with are suddenly solved. There have been studies about how our brains react to seeing only nature, they can rest and assimilate much better.
Kemi: Gardening is the closest we get to that in everyday life. Everyone’s happier with some dirt in their hands.

We see you’re making the kimchi with some of the spoils — how’s that coming along? Niko: It’s probably ready to be tasted — thanks for reminding me!