Meanwhile, back at the Ranch House with stylist Sjan Johansen…

Down a winding side road, over a one-lane bridge and up the last rise to the driveway, an arrow reading ‘This way’ is your guide around the final gravelled bend to the door of a Tauranga home affectionately named the Ranch House. Its owners Sjan Johansen and John Guise didn’t set out to live in the country, but now they’re the proud owners of this one-hectare haven with an unparalleled panoramic view, they hope never to let it go. “We’re still in awe,” says Sjan. “We’ll do everything we can to hold onto it.”
That’s saying something for these serial renovators, who’ve updated three houses in Noosa, one in Brisbane, one in Queenstown and one in Mount Maunganui prior to this, and tend not to believe there’s just one dream life to live. But for Queensland native Sjan and Kiwi John (owner of a marketing and events business), who moved to New Zealand from across the Tasman three-and-a-half years ago, there’s just something about this place. 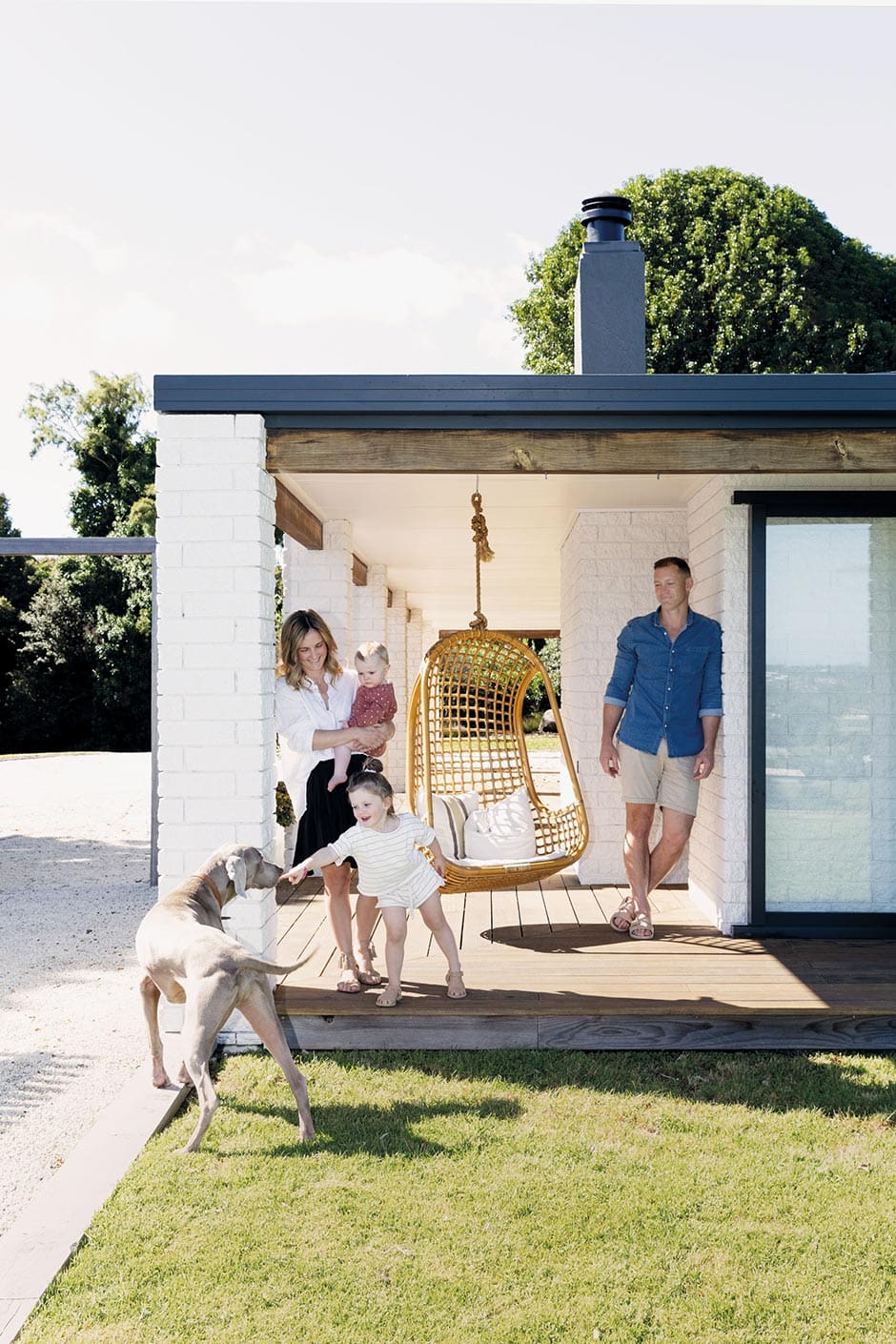 In the rolling hills on Tauranga’s western side, yet still close to town and the Mount beach beyond it, this area, Oropi, is populated by farms, orchards and lifestyle properties — but few quite like this. Before it was subdivided, Sjan and John’s slice of heaven was part of a larger farm on which a family was raised in a home built in the ’70s on one of the original house sites in the area. Since this founding family passed the baton to Sjan and John, the pair have overhauled the four-bedroom house, keeping the L-shaped footprint but revamping much of the rest. 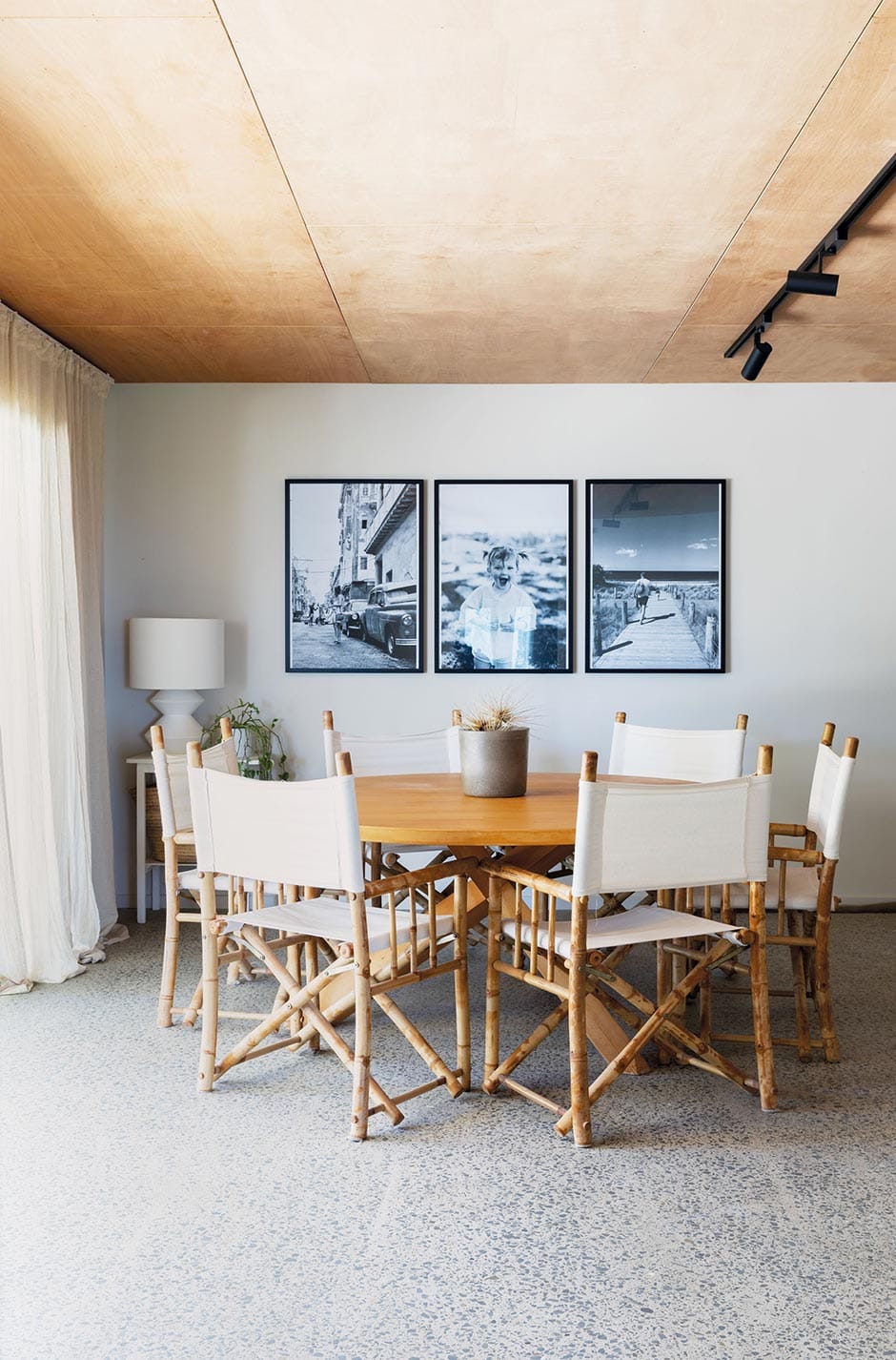 They took out the walls in the main entrance, living room and kitchen to create one open-plan space, and put in new doors and windows to connect it to the wraparound deck. When the wall removal revealed the low-pitched ceilings weren’t in the best shape, they opted to replace them with plywood panels, visually warming the home in the process.
Out came the lino in the living spaces in favour of grinding and sealing the concrete underneath, while the marbled brown carpet in the bedrooms was exchanged for a charcoal upgrade. Wallpaper of various jazzy descriptions sashayed across most of the walls, but like the bones of the home, it was in exemplary condition, so instead of stripping it off before repainting, they sealed it, then had a plasterer skim-coat and sand the joins, something Sjan recommends for a faster process and a better finish. “Plus, we kept our sanity,” she says. 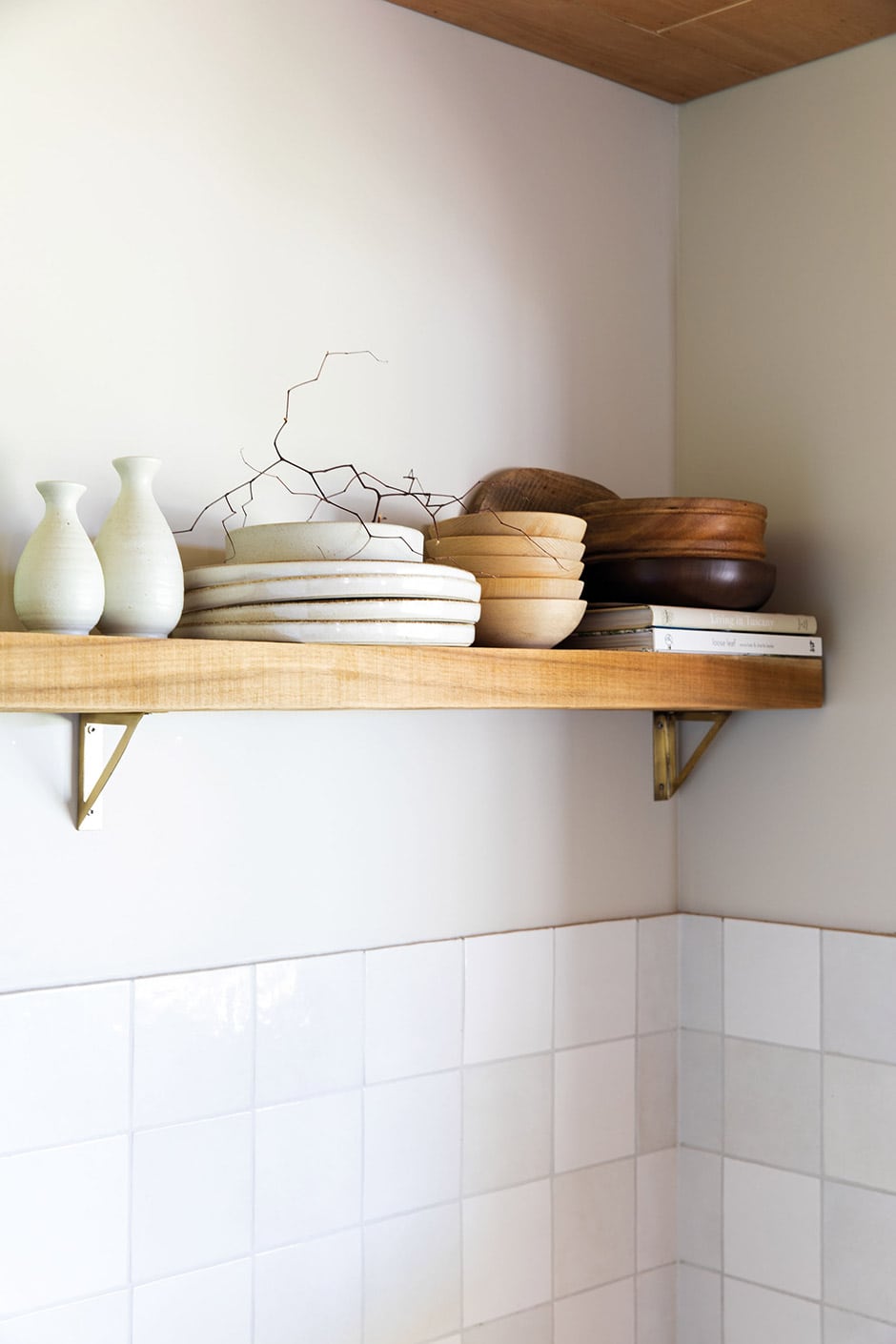 On the opposite side of the hallway, the couple combined the separate bathroom and shower room to create one space to redecorate. Past the curved wall beside this — a nifty existing feature they were thrilled to retain — the bedrooms were also in good nick and swiftly brought up to scratch with new joinery and décor details. 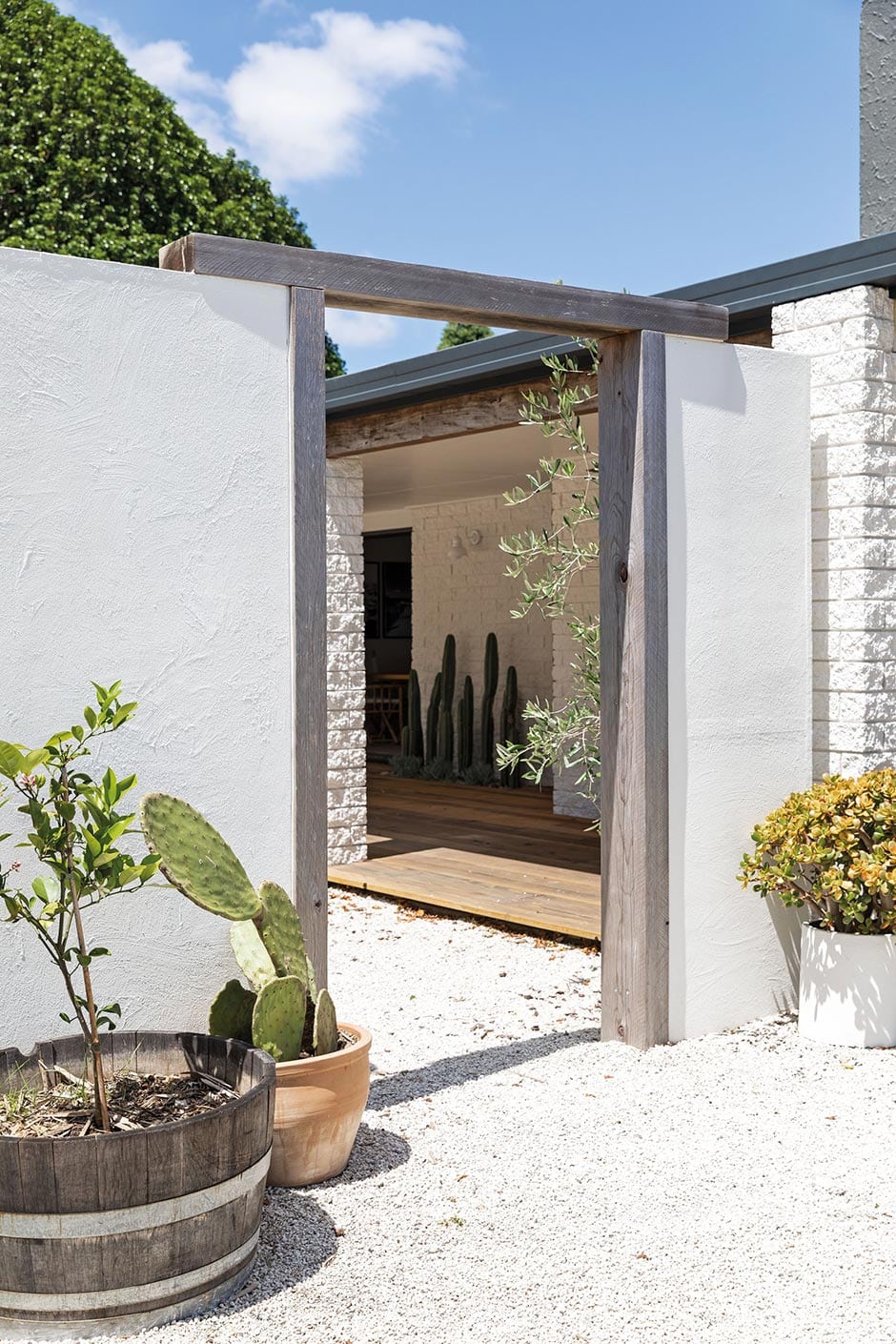 These “doers” got the bulk of all that completed in just eight weeks. Sjan was pregnant with their second daughter Georgie (now 1) at the time, and with toddler Frankie (now 3) to wrangle too, she wasn’t able to work as much as she had on previous projects. Still, she helped DIY when she could (including uncovering, then rendering and painting the original fireplace), while John project-managed; did the majority of the demolition; helped install the joinery; painted undercoats and the entire exterior; hung shelving; attached skirting boards, door frames, doors and handles; built the fences, deck, retaining walls, pergola and bedroom headboards; shovelled gravel; and more besides. 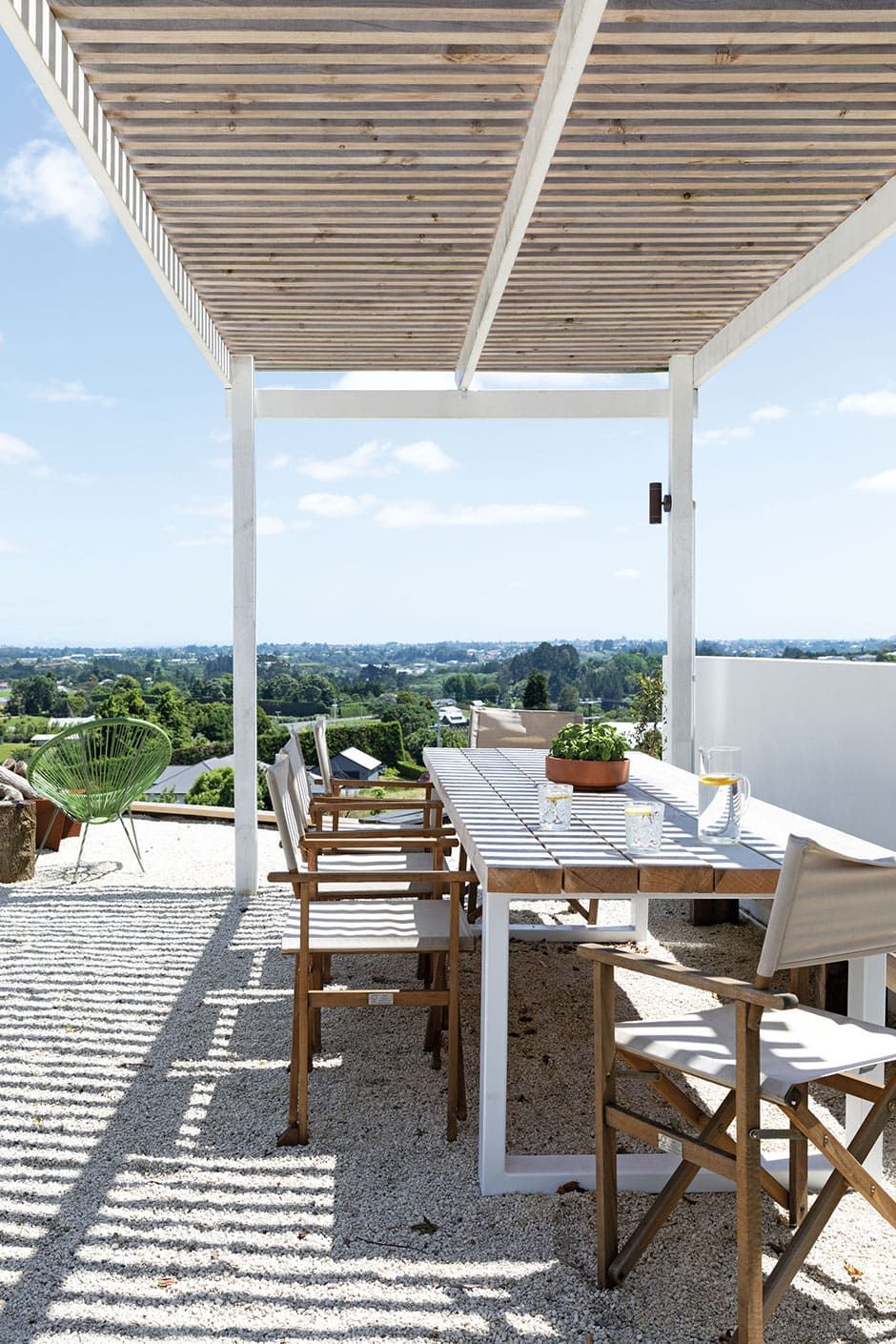 As well as being a mum, Sjan is a stylist who’s worked on everything from TV ads in Australia to magazine covers in Aotearoa. For this project, she drew from the landscape, combining country with coast and light with dark. “I kept it fresh but earthy through the use of beautiful textures and natural materials that make the house feel alive, authentic and handcrafted,” she says. “It’s definitely built for the way we live — we don’t have to be too precious about anything.”
Alongside their daughters, Sjan and John are raising a weimaraner dog and two Highland cows here. Rabbits and a couple of turkeys roam onto their plot, the neighbours’ pooch comes over to play, and possums pilfer from their fruit and nut trees. There’s birdsong in the air from dawn till dusk, as well as the crowing of roosters, the braying of donkeys and, says Sjan, “if our cows are grazing in the paddock behind our bedroom, we can hear them munching and sneezing”. 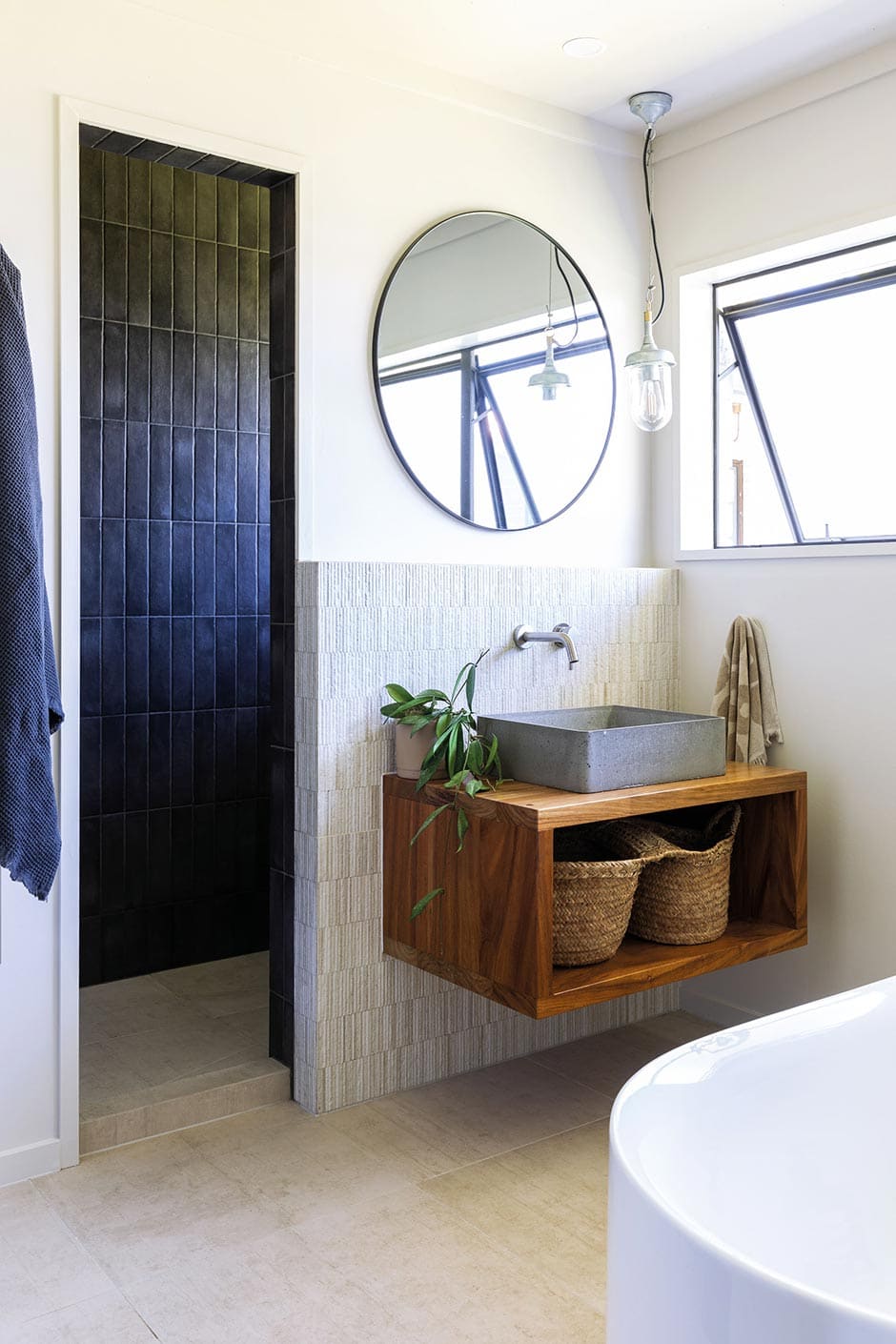 Along with finishing the powder room off the dining space, this great outdoors will be the last big thing for the talented twosome to tackle. “It’s going to take time, but we’ve slowly been chipping away at it,” says Sjan. “If budget allows, we’d love to add a plunge pool to the front lawn…One thing we’ve learned about this property is that it’s an ever-evolving project.”
It’s one they’re balancing with an inherently and pleasantly slower pace. “We feel so relaxed and free here, disconnected from the grind but not isolated,” says Sjan. “There are days when I realise I haven’t left the house — you forget, because you don’t really need to. That’s pretty cool.”
You can experience the good life here too if you like. Look for Ranch House Oropi on .