In 2013, Kerikeri-based golfer Paul Reid was offered an unanticipated opportunity: a new job and a new lifestyle for him and his wife Siobhan to ponder. An American investor had bought an expanse of land in Te Arai, north of Wellsford, and wanted Paul to run his new golf club, Tara Iti.
After due consideration, the pair decided to give it a go — though that’s not to say they didn’t have their reservations. “I’m a lawyer by trade and had no idea what I’d do in a tiny beachside town,” says Siobhan. Nevertheless, choosing to take a chance, they bought a small home in nearby Mangawhai as an investment they could live in initially, while intending to keep an eye out for a more permanent base if they decided to stay on long term. 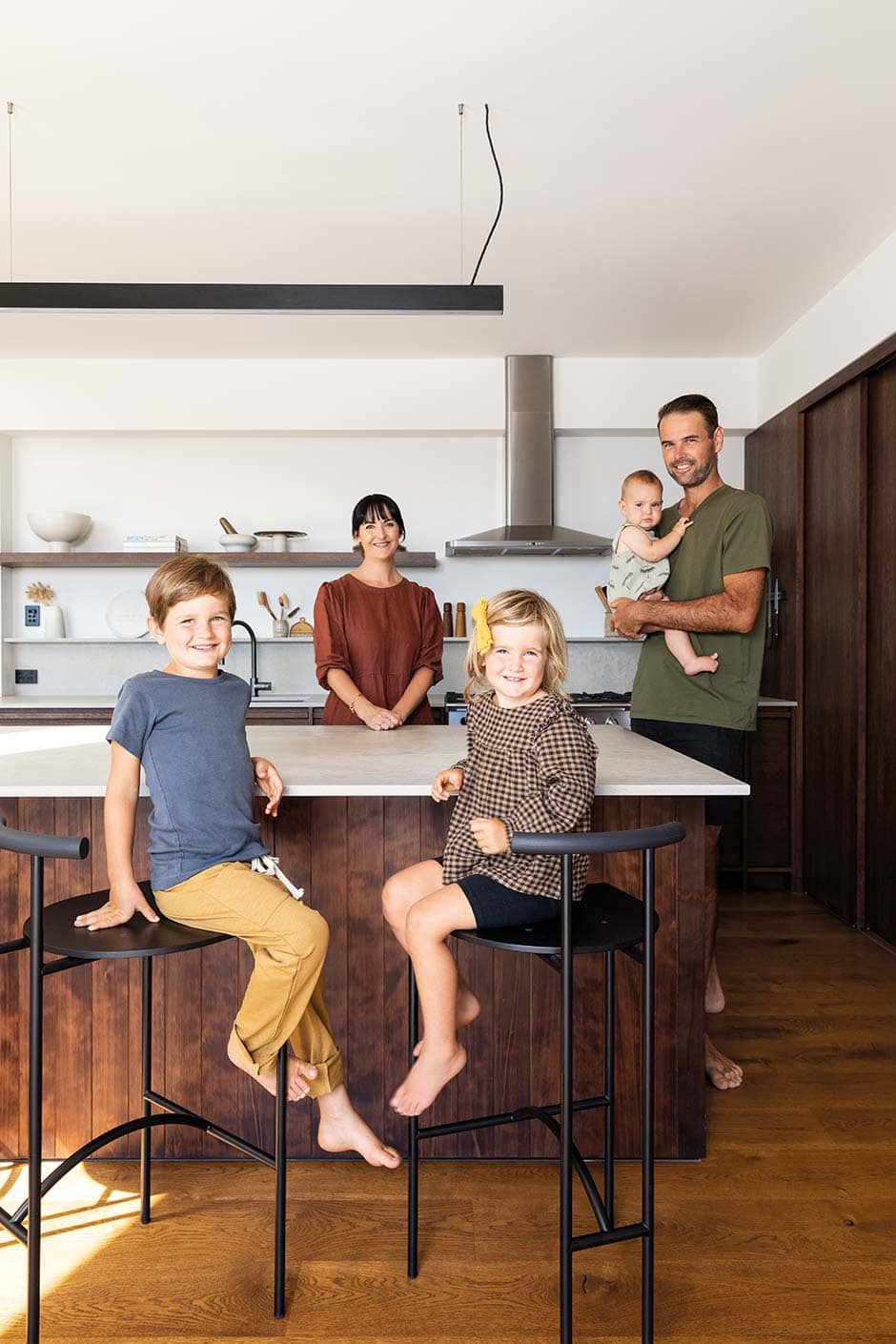 A few years passed and, sure enough, a property with potential came up for sale right when they were ready to put down roots. A 12-year-old home on 10 acres with views of Mangawhai and the Brynderwyns, it was on the right track but would require a little tweaking.
“I was eight months pregnant, so I totally romanticised it,” recalls Siobhan. “I walked onto the land and knew it was where I wanted to raise our kids [Felix (5), Margot (3) and Freja (1)]. We’ve since found out that the previous owners, a retired couple, spent around five hours a day maintaining the garden, which isn’t so romantic!”

With expert input from Siobhan’s architect brother James, the couple took their time to contemplate their designs while they had their second child. By January 2020, their intentions were confirmed, the consent plans drawn up by Orcan Design were approved and the build was ready to begin.
The original homestead boasted three bedrooms, two bathrooms, one living area and some beautiful original features, but it needed to be opened up and extended. The existing kitchen, dining room and main bedroom became one open-plan living space that connects to a deck that captures those impressive views. The living room was turned into a playroom, a guest room was added in an extension at one end of the house, and an upgraded master suite went into the other. 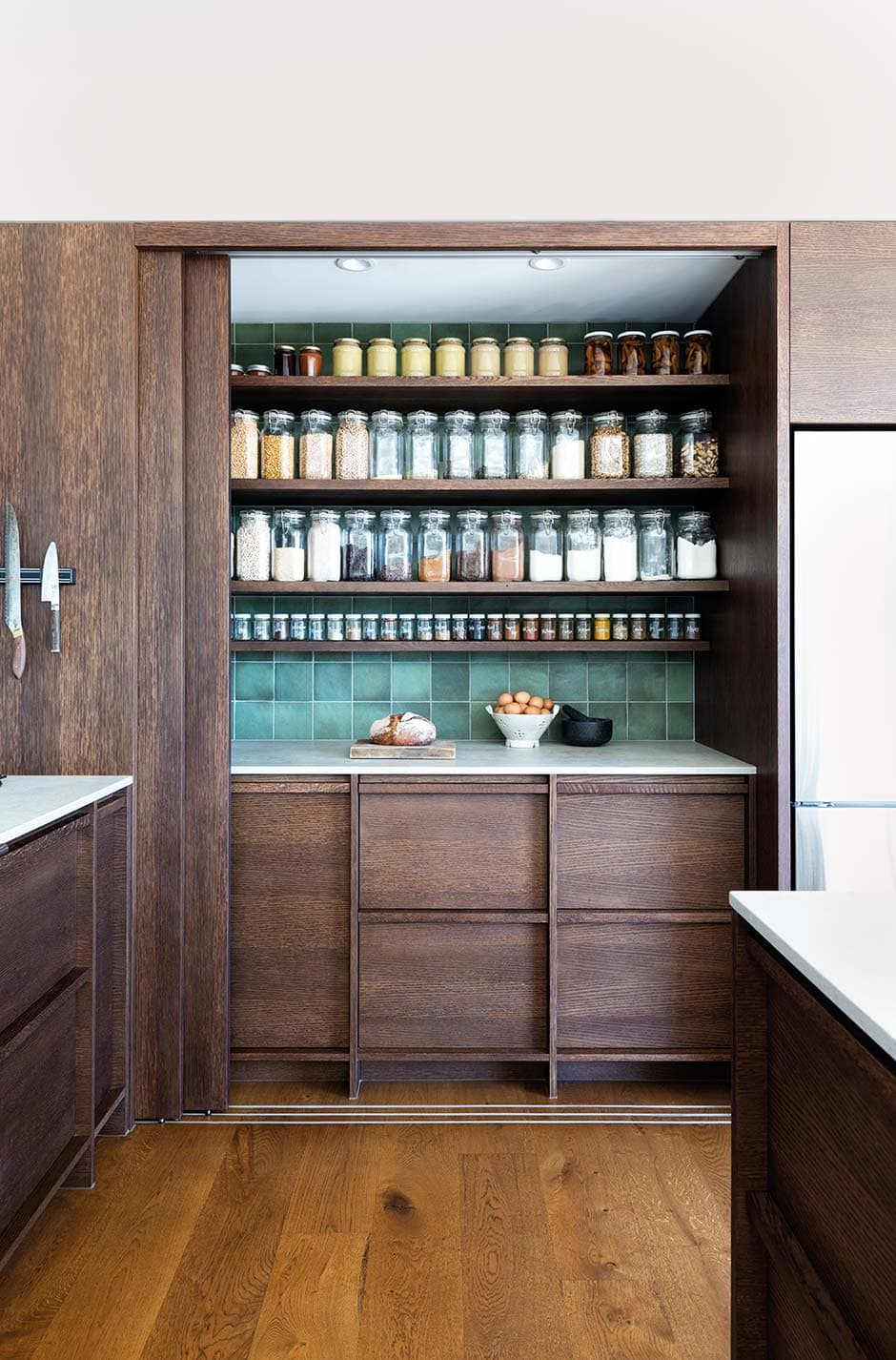 Siobhan’s a keen cook, so designing the kitchen was her domain. “I spent hours measuring the drawers and figuring it all out — and I love it, I’m really happy with the result,” she says. “With the help of Guyco in Whangārei, I chose a Caesarstone Primordia benchtop as it gives a stone look but is super hardy, which is much needed with a young family.” It’s teamed with Ashin tongue-and-groove and oak cabinetry to form a user-friendly, functional space complete with a handy extra basin at the end of the bench that Siobhan deems “a great decision. Living rurally means the kids are always outside getting dirty, so I pick them up and pop them straight in it to wash their feet and hands when they come inside.” 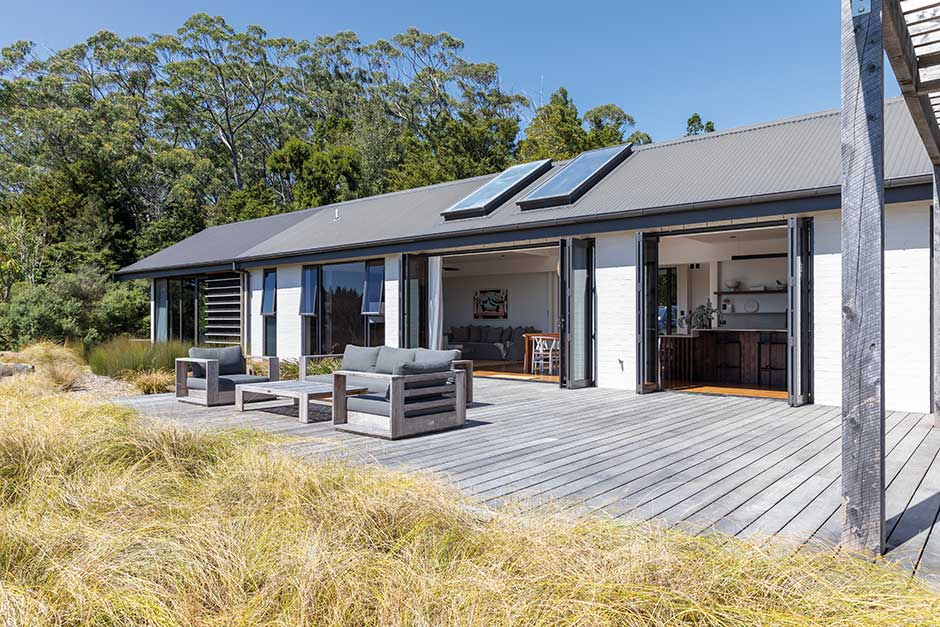 Siobhan candidly reveals that as first-time renovators, she and Paul didn’t exactly find the process easy. “Doing anything for the first time, you’re a total amateur. I thought because I wasn’t working, I could project manage, but there’s just so much to learn, and an endless amount of work that carries on into the evenings, like research and invoicing.”
Lucky for these rookies, they had James to lean on. “He knows me inside out, so I’d throw ideas to him for feedback, and when the builders DEC Construction were on site with technical questions I couldn’t answer, I’d call him and hand over the phone,” says Siobhan. 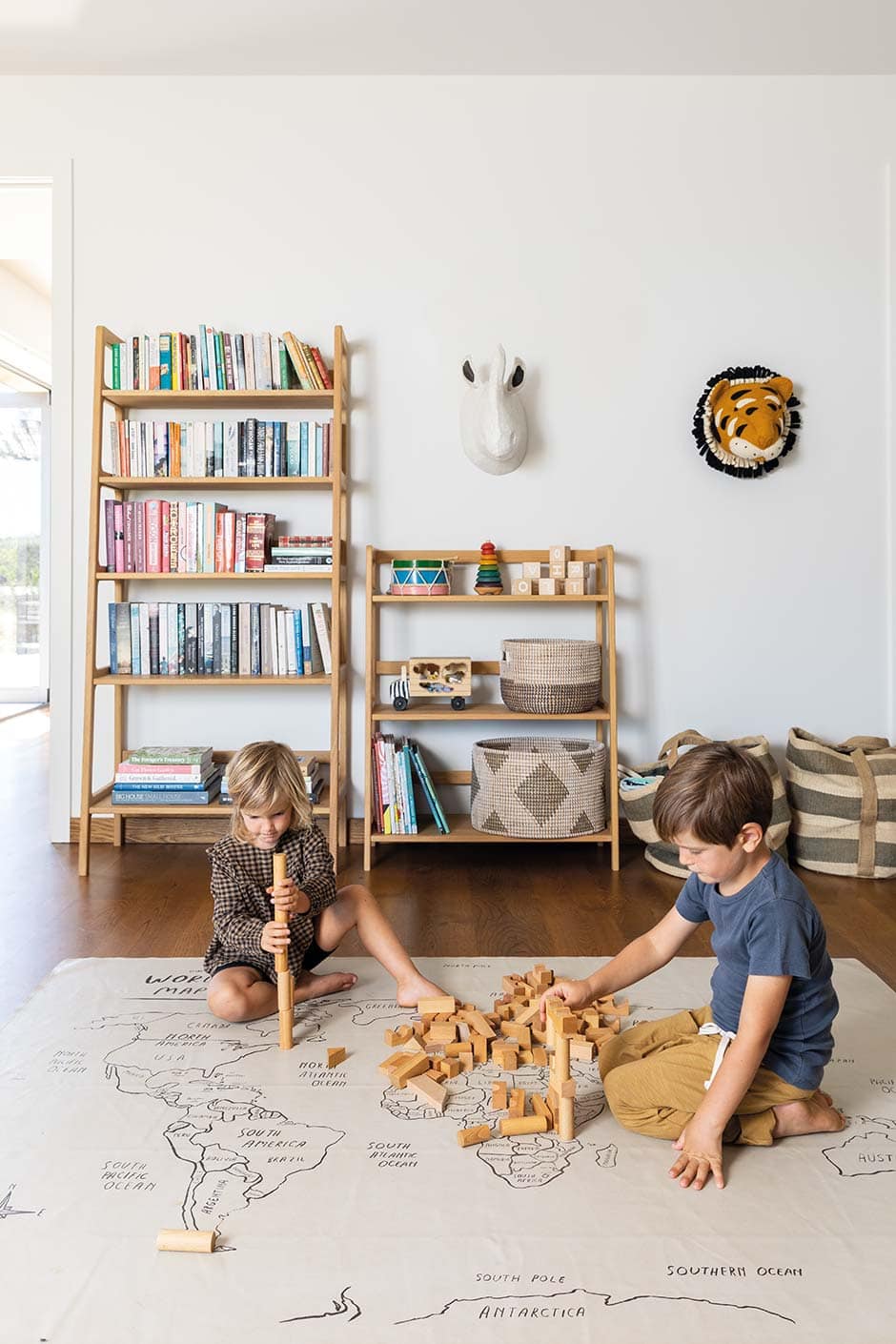 In natural materials and neutral colours, the resulting team effort exudes a sense of sophisticated calm. The home’s generous, light-filled layout provides ample areas for the family to enjoy — the favourite spot being the outdoor living space.
“We added a great big deck, a pergola, a concrete patio area with an extended roof for shade in the summer and an outdoor fire that’s awesome in winter,” says Siobhan. “We love entertaining and having friends around, so it really works for our lifestyle.” 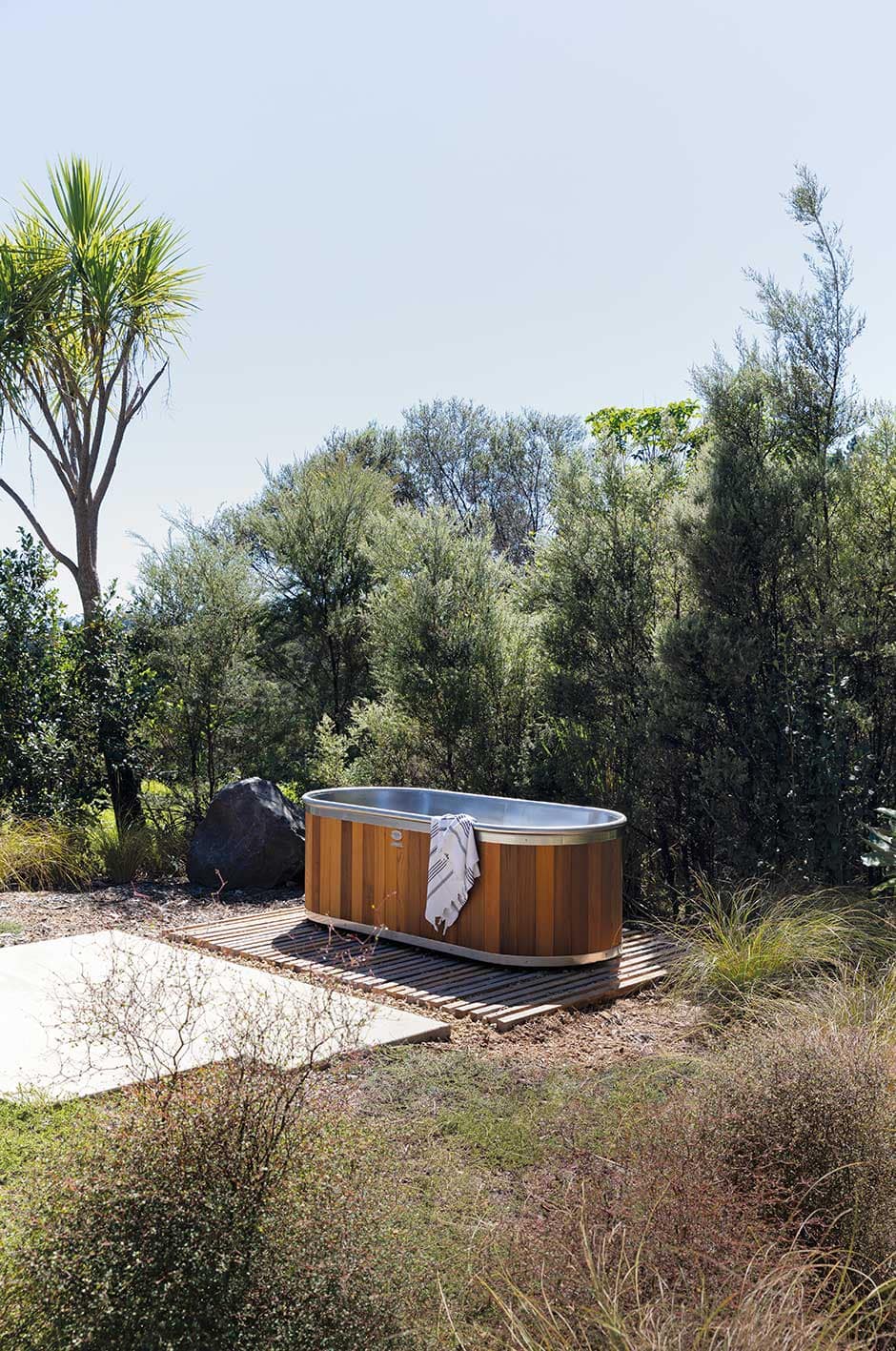 The new bedrooms are also the perfect fit. “I absolutely love ours,” says Siobhan of her and Paul’s sleep space. “We invested here to create our own sanctuary down one end of the house, but kept it really simple, because the floor-to-ceiling windows showcasing the native bush are the statement piece. I love waking up, drawing the curtains and opening the sliding door to let nature in. The shower in our ensuite also has a sliding door that opens onto a deck, and it’s amazing showering with it wide open, plus there are stairs beyond it that lead down to an outdoor bath.”

In fact, expansive windows were installed throughout the house to highlight the beauty of the gorgeous garden and orchard that give this property a retreat-like feel. It was a bit of a journey to get here, but now they’ve arrived, this coastal-meets-rural lifestyle suits the Reids to a tee, proving that sometimes the most unexpected opportunities can lead to the ultimate outcomes.