The white, double-storey villa in a quiet street in Tāmaki Makaurau/Auckland’s Cox’s Bay looks like something out of a storybook. With its gracious gabled end, ornate trims and balcony with a turned-wood balustrade, it could be a dollhouse. To Lou and Sam Halse, it was the picture-perfect home, where they could fling open the French doors to the capacious back garden and host the very occasions they came back to Aotearoa for. 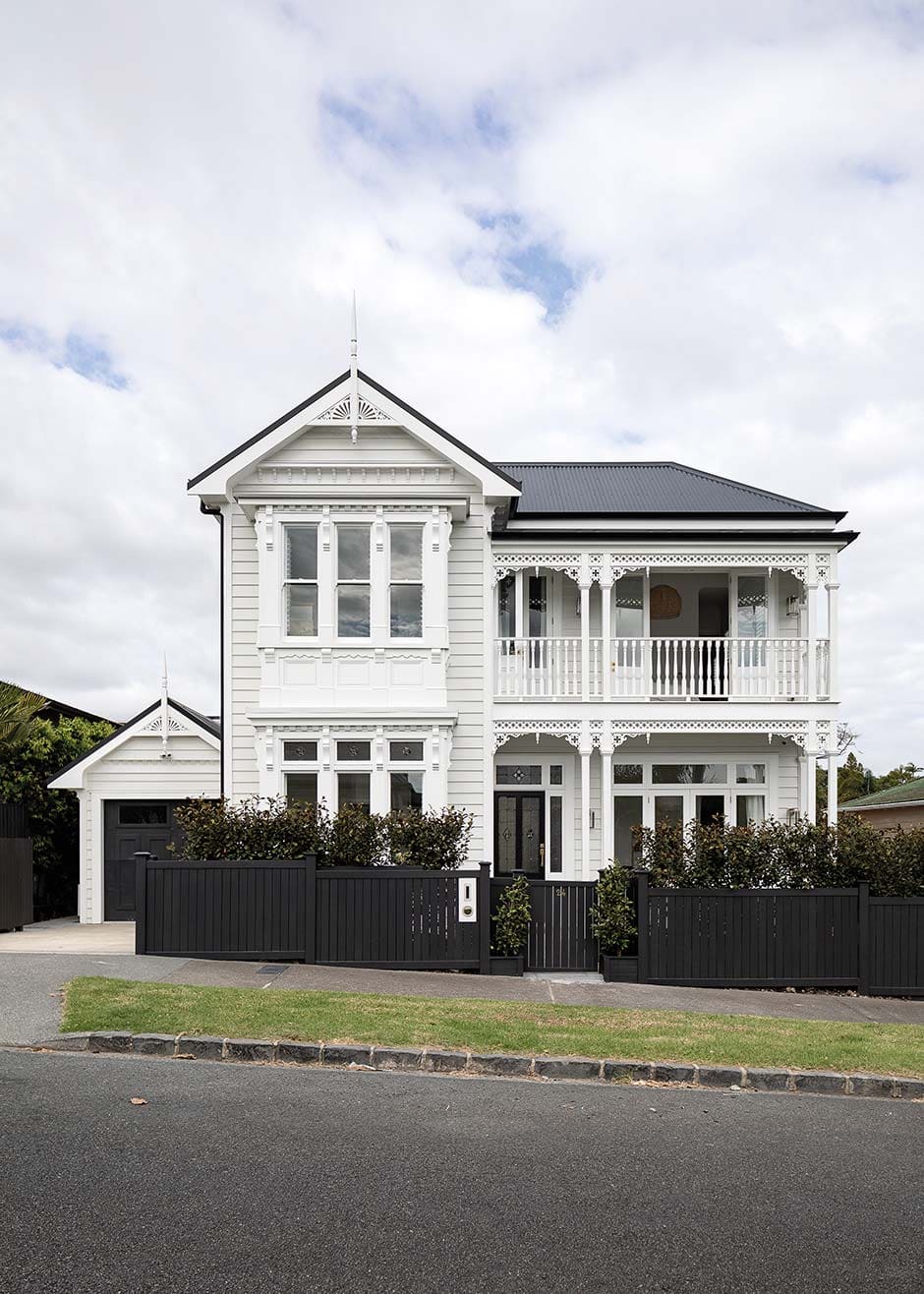 Lou and Sam are both Aucklanders but had been living overseas for 10 years when, by pure chance, they booked flights home, with no sense of impending pandemic panic. “It was December 2019, just before Covid was a thing,” says Lou. Their young children, Toby (now 4) and Juliette (3), were growing up fast and it was hard having family so far away.
The couple was accustomed to living in small spaces. In Amsterdam, they’d occupied a “wonky but adorable” canal house. “There wasn’t a backyard, so we’d all congregate at the park or meet at cafés where the table and chairs were set outside on the cobblestones,” recalls Lou.
Later, when they moved to San Francisco, they got used to Victorian-era apartment living. “Ours was one super-small house split into levels,” says Lou. “But it did encourage us to get out, so we had lots of connection to our neighbours and community.” 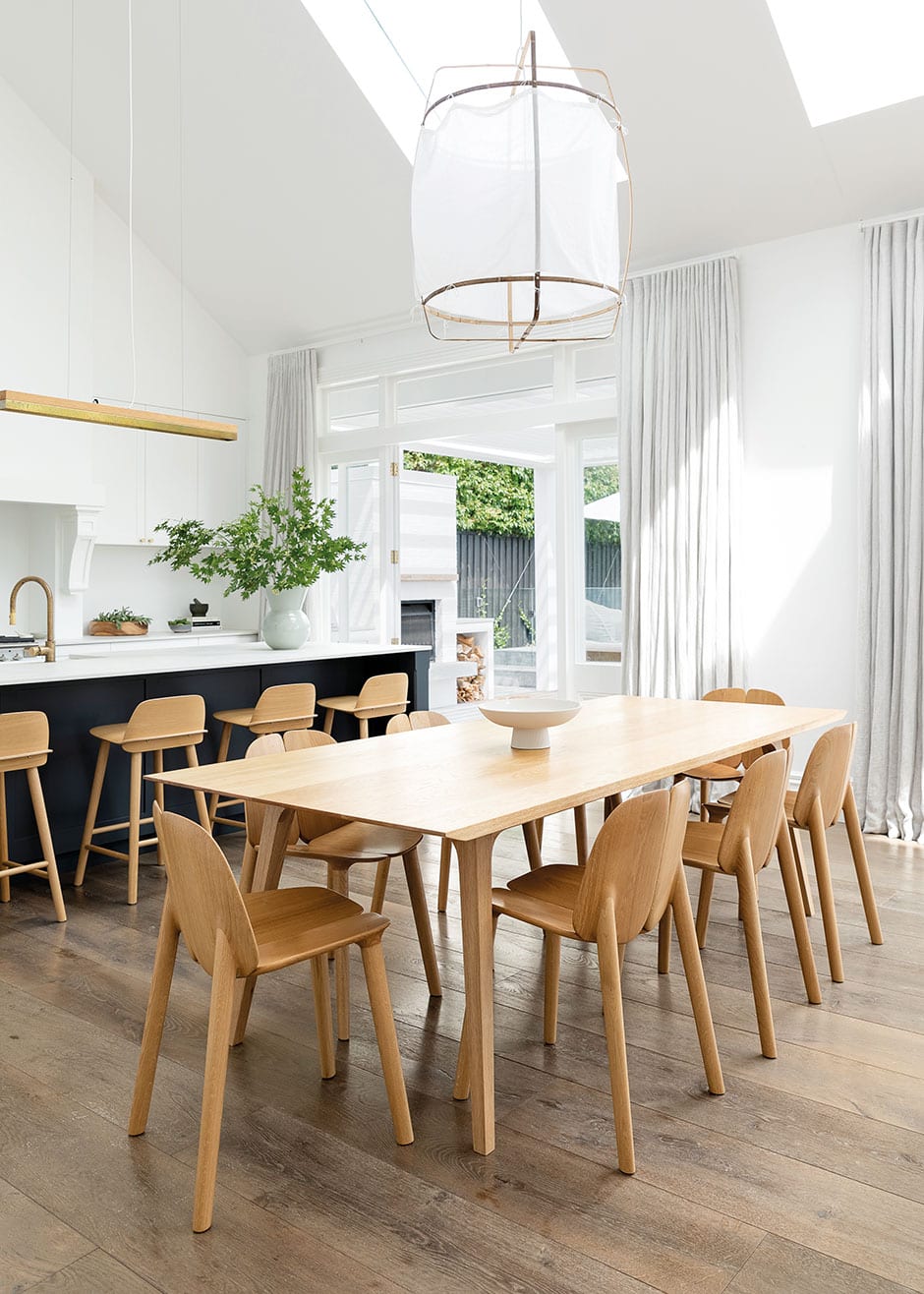 On their return to Tāmaki Makaurau, Lou and Sam initially bought a workingman’s cottage in Kingsland. Although its character and diminutive footprint felt familiar, one thing after another needed fixing, so when they spotted this place put out to tender bids, their interest was piqued. “I’ve always had a soft spot for villas,” says Lou. “I was instantly emotionally attached.”
She was drawn to the leadlight front door, the parquet floor in the hallway and the classic mouldings — plus the fact that it was all in perfect condition. “It’s a replica villa completed in 2018,” she explains. 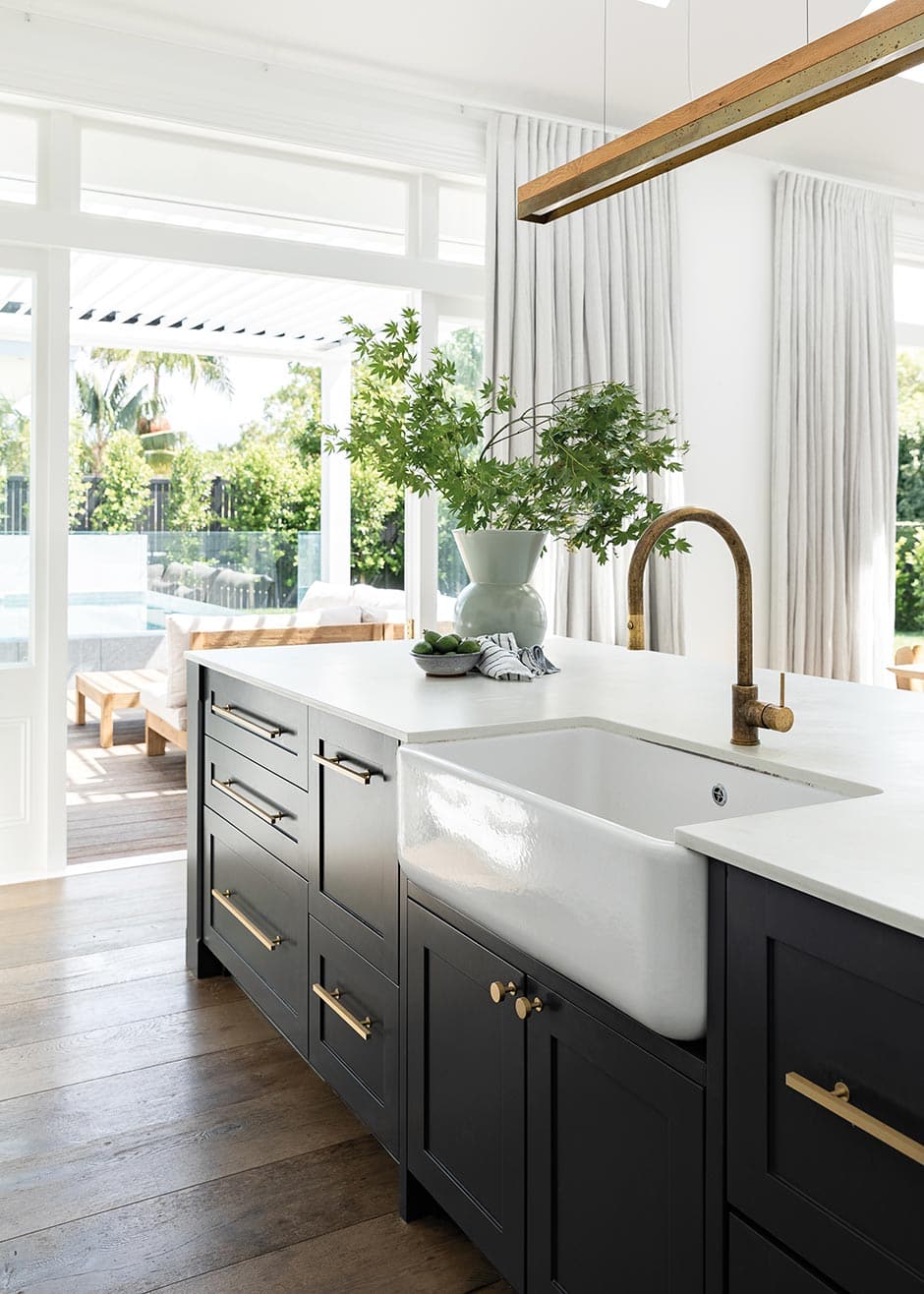 Of course, moving from a cottage to a four-bedroom house with 280m2 of living was extreme. The furniture they did bring with them made scant impression on the generous spaces and they had nowhere near enough art for the blank canvas. In the main living room, the children practised roly-polys on the floor while Lou and Sam marvelled at the incredible amount of light and height they now possessed — and wondered how they’d ever fill it. 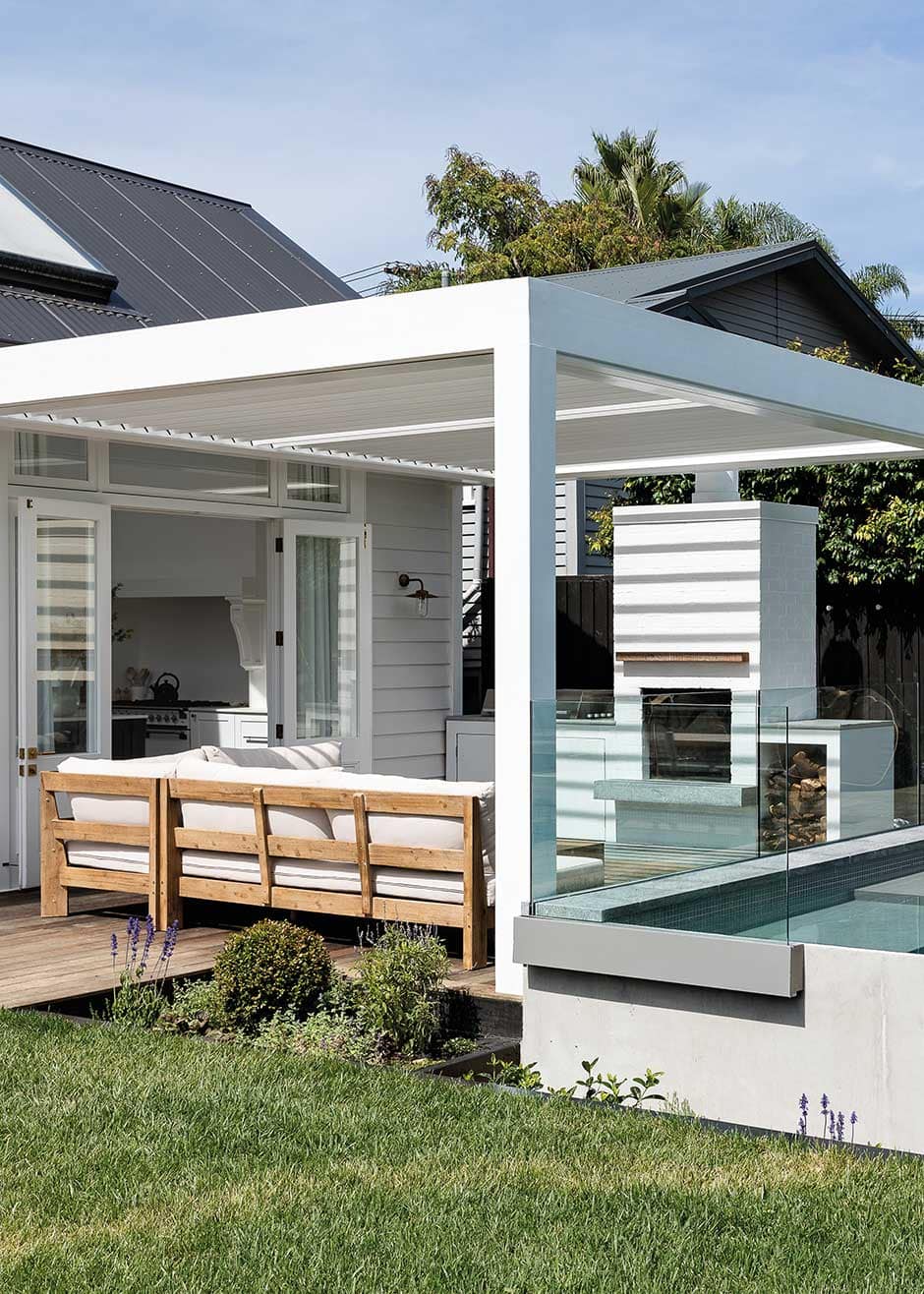 Since Lou had spent the past decade abroad, she no longer had her finger on the pulse of the local design and furniture stores, but sisters Amy and Jess de Court of de Court Design, who the couple met through mutual friends, were happy to help. Together, they gathered the goods that would stand up to the sheer scale of the home, aiming for a casual, contemporary vibe that would sit within the tranquility of the Resene Alabaster palette. “The emphasis was on a soft, minimalist look, with plenty of texture and timeless pieces,” says Amy. 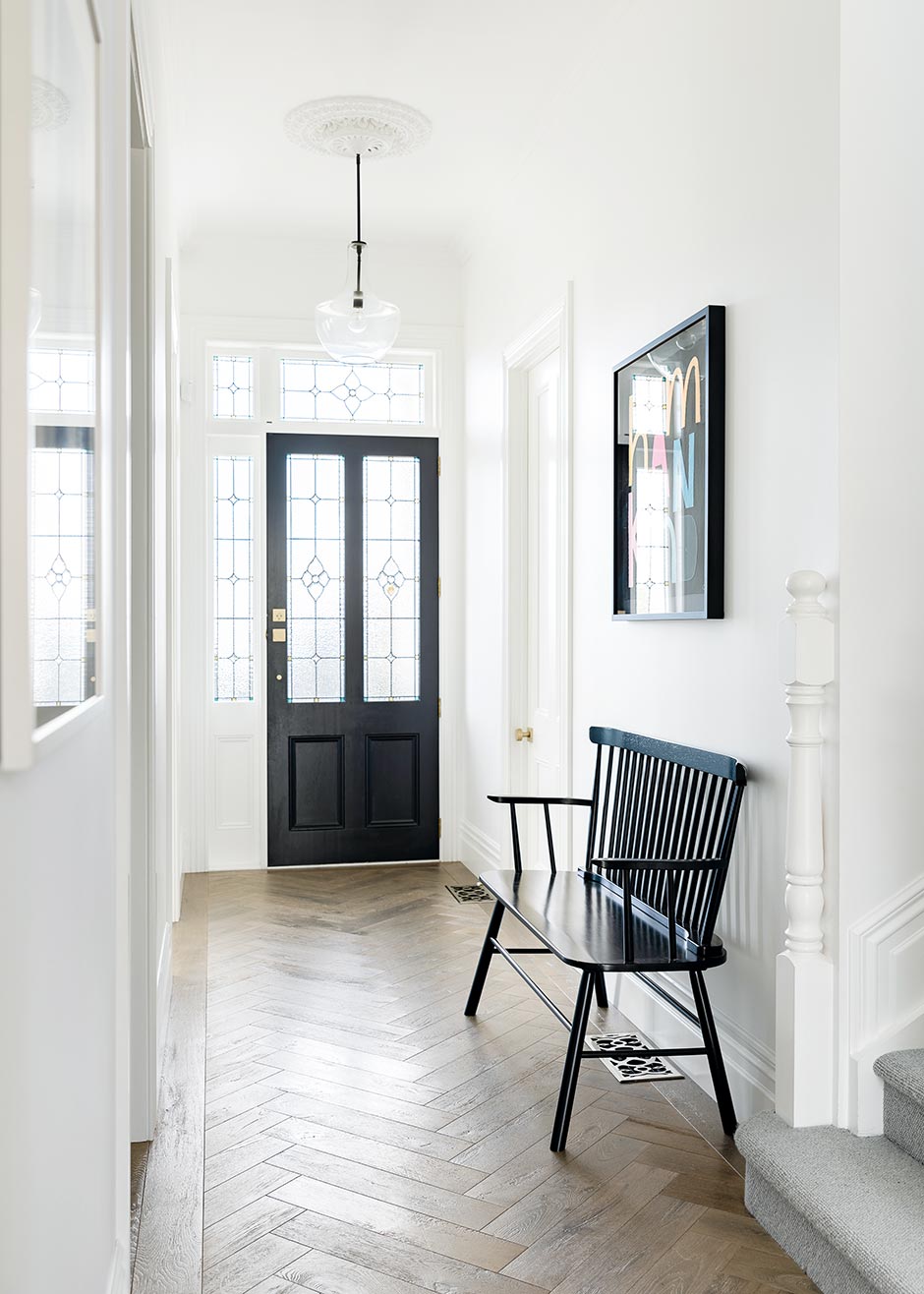 The aesthetic certainly has a lightness — think linen curtains, pale louvres, and bamboo and cotton lightshades — but it’s grounded by elements of earthiness in the form of leather chairs, chunky timber tables and a jute rug. It was the de Courts who suggested the oak dining table that has become the centre of family life. “From breakfast to morning tea, lunch, afternoon tea and dinner, I feel like it’s the most important item in the house,” says Lou. 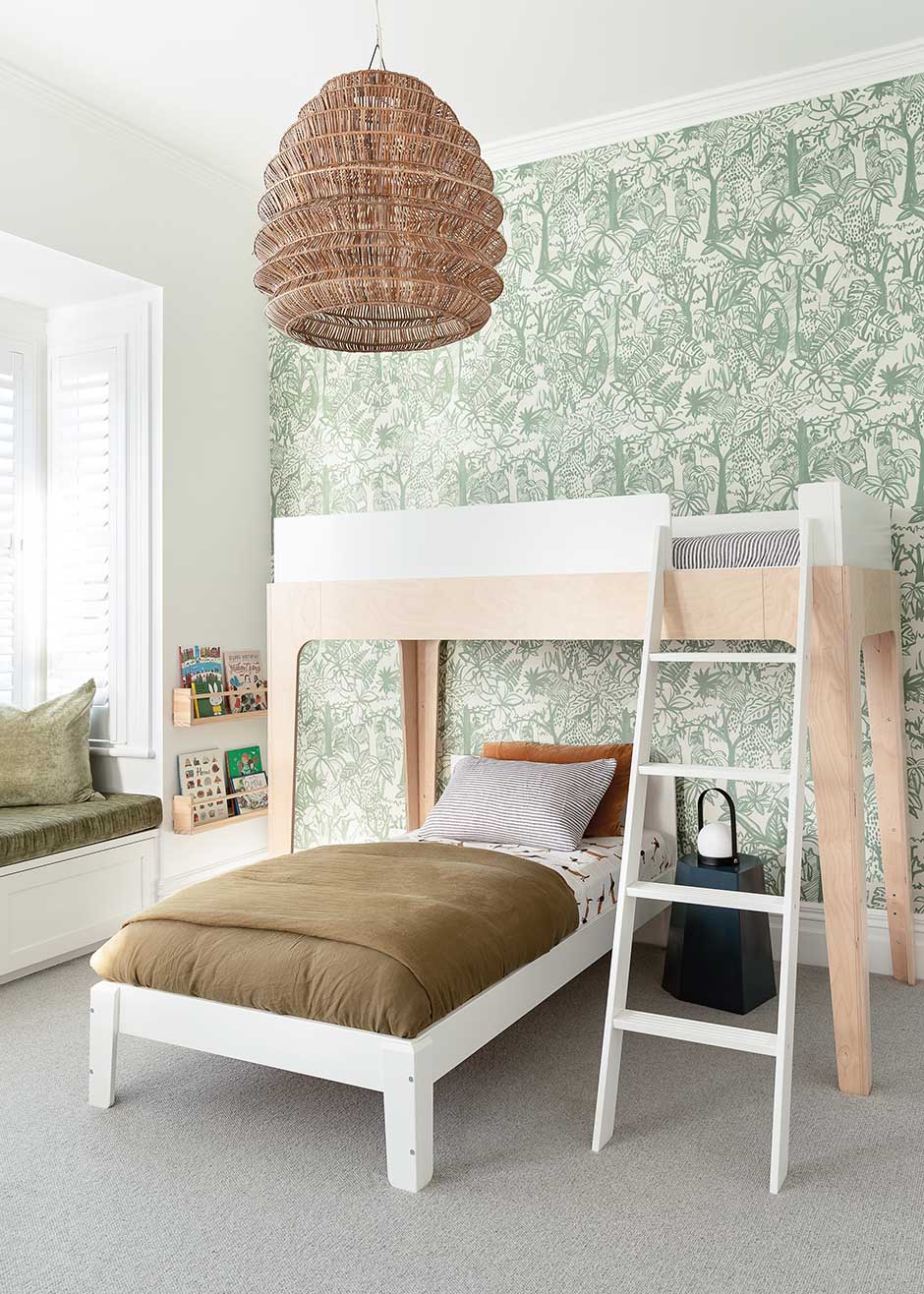 Although it may be hard to discern, she’s a fan of colour — a trait that reveals itself in the boutique sleepwear brand she took the helm of last year. General Sleep’s range includes gingham pyjamas in shades that make it clear having a bit of fun with this and the first home she’s decorated is key, if low-key, for her. She’s used tree-green wallpaper in Toby’s room — a forest he likes to explore from the top bunk — and a stylised print featuring coral-coloured arches for Juliette’s. In the living room, bench seats upholstered in a textural gold fabric are punchy yet chic, and (although she says it’s pure good fortune) in a tone that perfectly matches the brushed brass hardware here and in the kitchen. 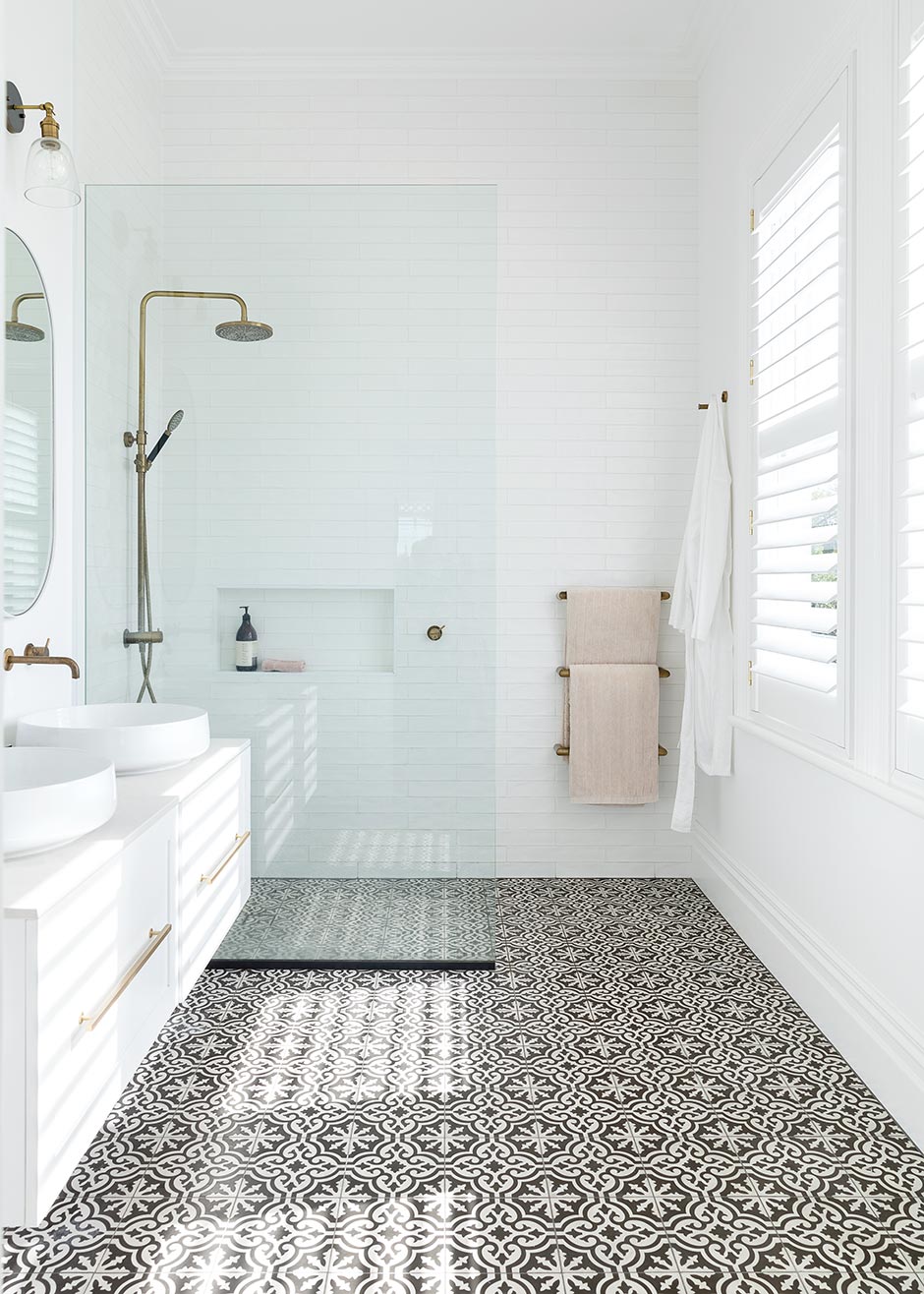 Outside, the couple, who consider this their forever home, threw some funds into landscaping. They raised the pool off the ground, added a deck with built-in benches, and relocated the alfresco fireplace over towards the fence. Lou’s planning to add a sprinkle of colour to the ‘moat’ in the form of wildflowers.
This summer, the outdoor room with its louvred roof was everything they’d hoped for. The pool was a hit, the barbecue was busy and on New Year’s Eve, they wheeled out the cocktail trolley, shook up pisco sours for the crowd and toasted to their homecoming. Although there’s still much to do to augment the design story, winter’s almost here, and with it plenty of time to compose a
happy ending.