We visit – the city’s newest headline hotel – as they unveil their Universal Penthouse Suite designed by .

Villa Copenhagen’s central location, next to Tivoli Gardens and the Meatpacking District, isn’t just what put the hotel on the map after it opened two years ago.

Uniting conscious design and casual sophistication for discerning travellers, Villa Copenhagen is an embodiment of Denmark’s design DNA. Unfolding inside the old Central Post Head Office, the historic building redesigned by London-based is described as the ‘new social scene’ that’s acutely aware of its environmental footprint.

Adding another string to its bow, Villa Copenhagen just opened their redesigned Universal Penthouse Suite in collaboration with Danish design stalwarts . As the brand behind some of the country’s most notable design pieces, focuses on reworking icons and creating tomorrow’s classics – naturally aligning with Villa Copenhagen’s evolution.

Australian interior designer was among the first to experience Villa Copenhagen’s refurbished penthouse suite by &Tradition. We sat down with Lucy to trace some of the most memorable aspects of her stay.

&Tradition pieces featured in the penthouse include and Rely upholstered dining chairs by Hee Welling.

Villa Copenhagen is set in a century-old landmark Neo-Baroque-style building. The hotel, with interiors by London-based Universal Design Studio, plays host to 390 guest rooms – all tapping into the original architecture through a contemporary celebration of Scandinavian design. “The general feeling of the hotel was intimate despite being almost a 400 keys hotel,” Lucys says. “As you enter big doorways of the grand former Danish Post and Telegraph Office building, you are led into the lobby, which has a curved glazed canopy ceiling that creates a courtyard experience – just like you’re outdoors,” she says.

The updated penthouse suite by &Tradition are an extension of the brand and Villa Copenhagen’s ethos and aesthetic. Each suite is designed to bring ‘a sense of contrasts, happiness and conscious luxury to its guests’. “The penthouse rooms felt like a private home,” Lucy says. A double-storey loft space, Lucy’s penthouse featured a spiral staircase, deep picture windows looking out onto Copenhagen’s rooflines and a considered showcase of & Tradition’s lighting, furniture and objects, including some of their latest designer collaborations. “The interiors were relaxed and elegantly styled. The lighting was detailed perfectly,” she adds.

“The general feeling of the hotel was intimate despite being almost a 400 keys hotel.”

The penthouse interiors are a contemporary celebration of the historic building, accentuated by design details such as the natural limewash wall finish and exposed timber beams. The shelf features the . 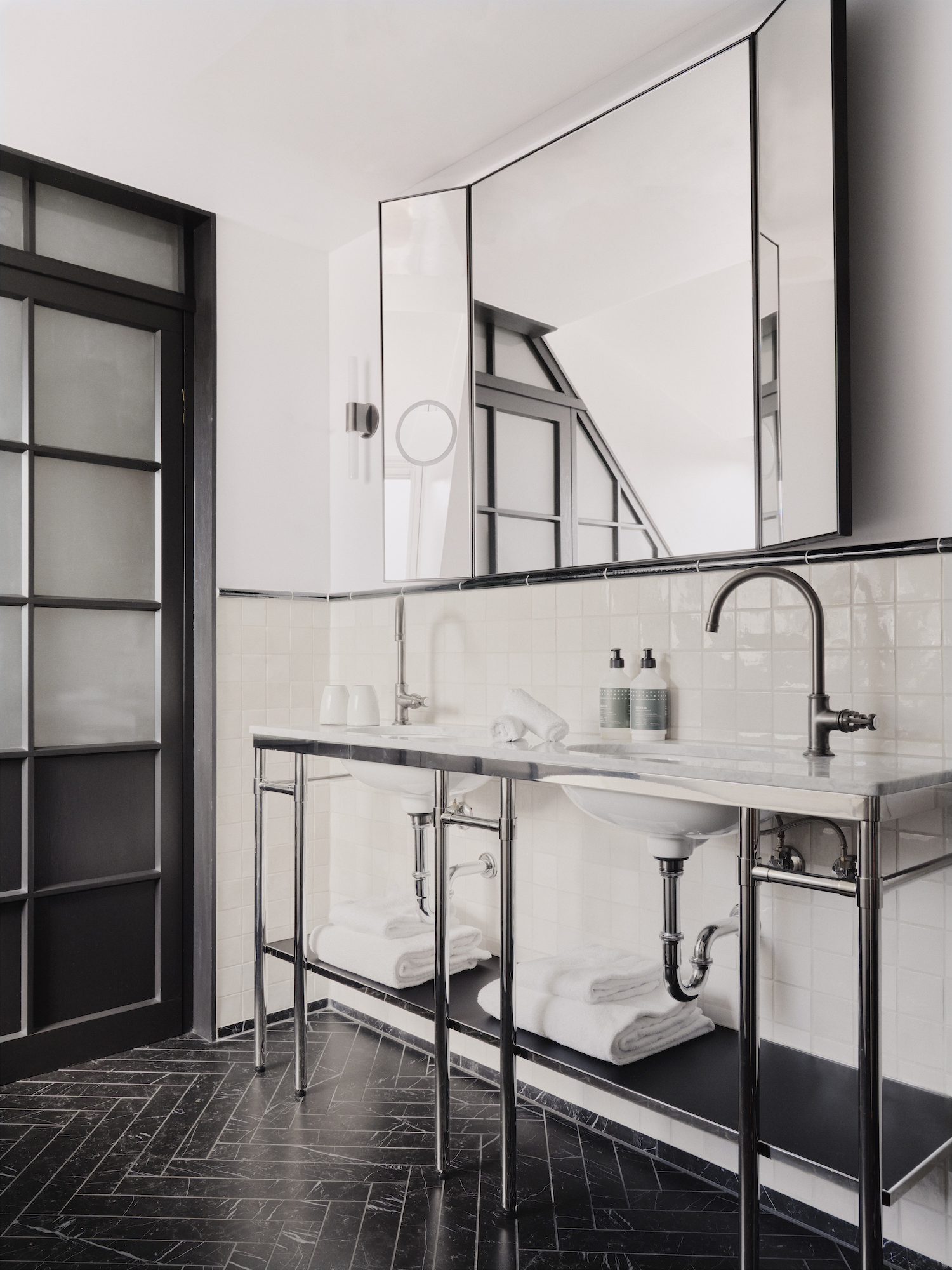 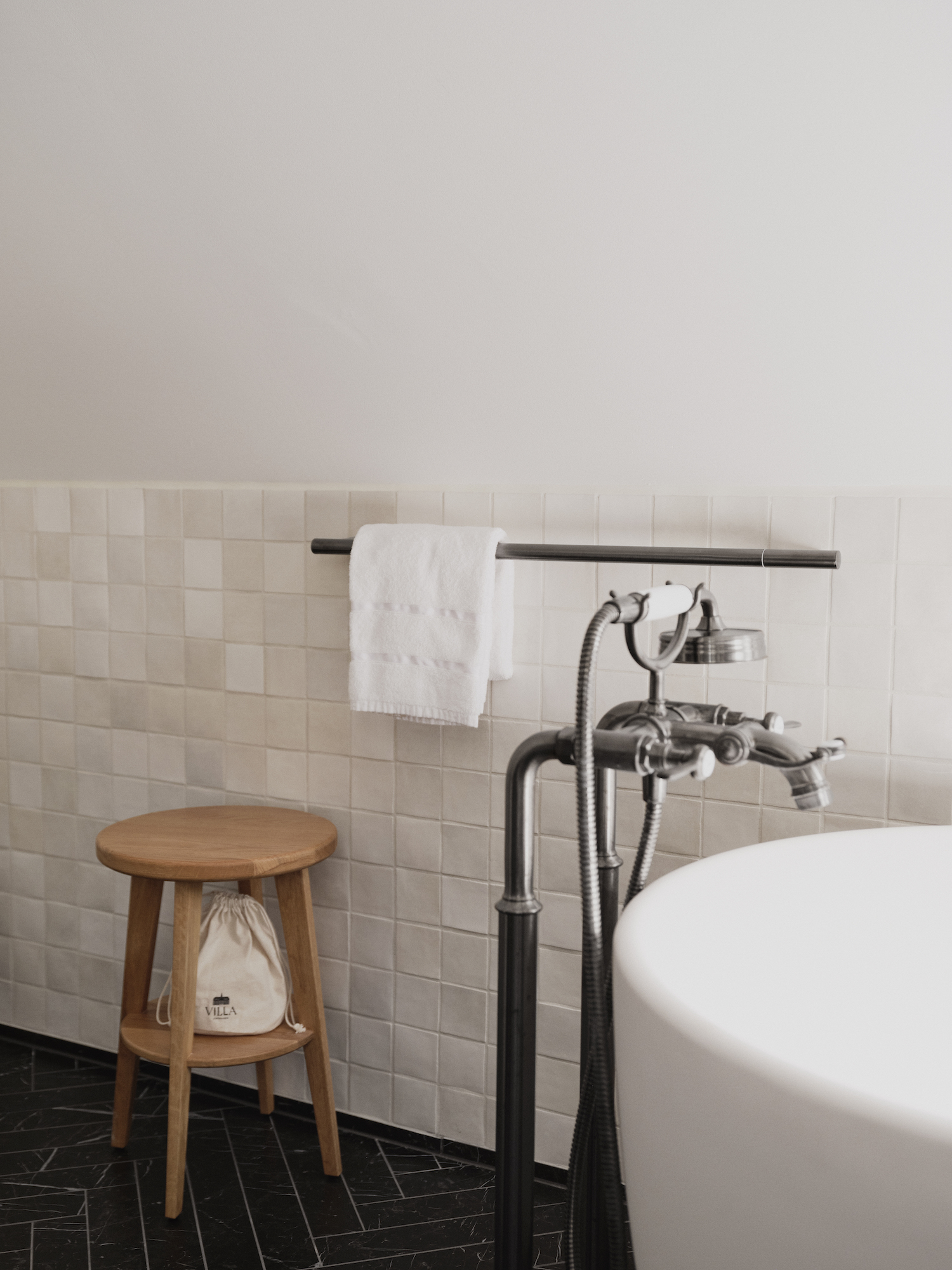 The penthouse features a Nero Marquina and Zellige tiled bathroom with free-standing bath. 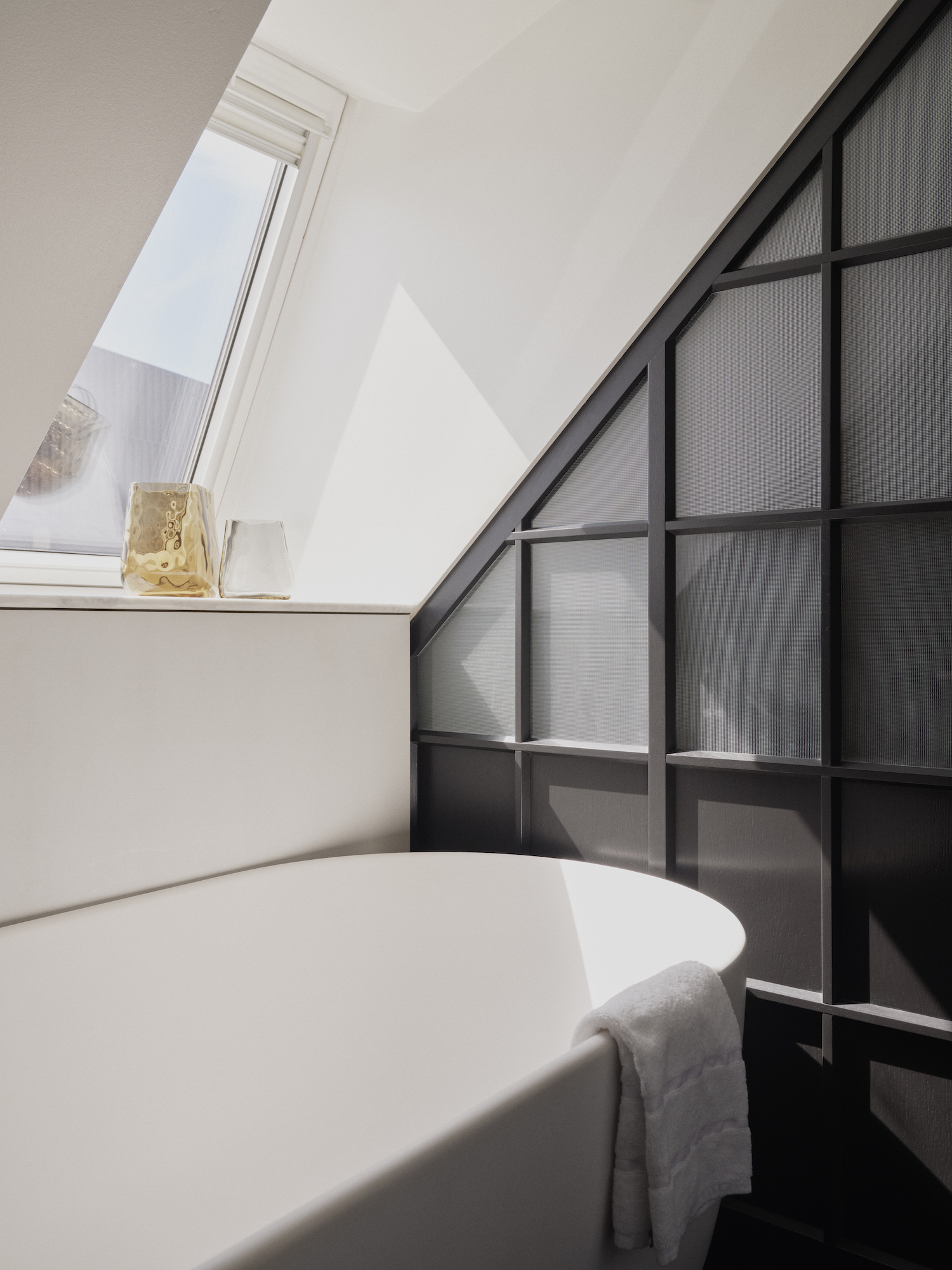 Lucy says she was taken by the holistic narrative behind the hotel’s design approach. “The ‘sustainable luxury’ initiatives were a standout Villa at Copenhagen,” she maintains. This surfaces through the dining experience on offer, the inspiring surroundings – including a series of green interior spaces to promote calm – and the way the hotel recognises its responsibility for the planet by working toward UN Sustainable Development Goals (SDG’s). The hotel also features an Earth Suite designed by – featuring only recycled materials, textiles and sustainable furniture by Danish manufacturer .

Not only does Villa Copenhagen make itself available to visitors outside of the city, but it also hopes to be a hub for those that live there, where locals can convene and connect. The hotel was designed to ‘establish a community rather than simply a hotel’, recognising how it could contribute more broadly to the neighbourhood.

London interior design studio designed all of the eateries at Villa Copenhagen, while executive chef Tore Gustafsson has led the ‘Carbon-free’ dining. This thread is felt through the Rug bakery – meaning ‘Rye’ in Danish and the mid-century-themed – both located in the heart of Villa Copenhagen: The Courtyard.

Beyond the hotel’s dining spaces, the rooftop pool (with pool bar) and 24-hour fitness and wellness area with sauna are the places to be. “The pool reads ‘swim with a clean conscience’,” Lucy says. “It’s a 25m sustainable lap pool warmed up with the excess heat from the hotel cooling system,” Lucy says. “I love that.”

In a city that isn’t short of , Lucy’s experience tells us that Villa Copenhagen has carved out an entirely individual offering. Case in point: their new penthouse suite by &Tradition –  just one of many ways the Danish hotel is actively redefining the industry.

The Courtyard, a ‘multidimensional social space’, was designed to be the heart of Villa Copenhagen, playing host to live music and events.

Beyond the refurbished penthouse suite by &Tradition, the hotel features 390 guest rooms and suites designed by Universal Design Studio. 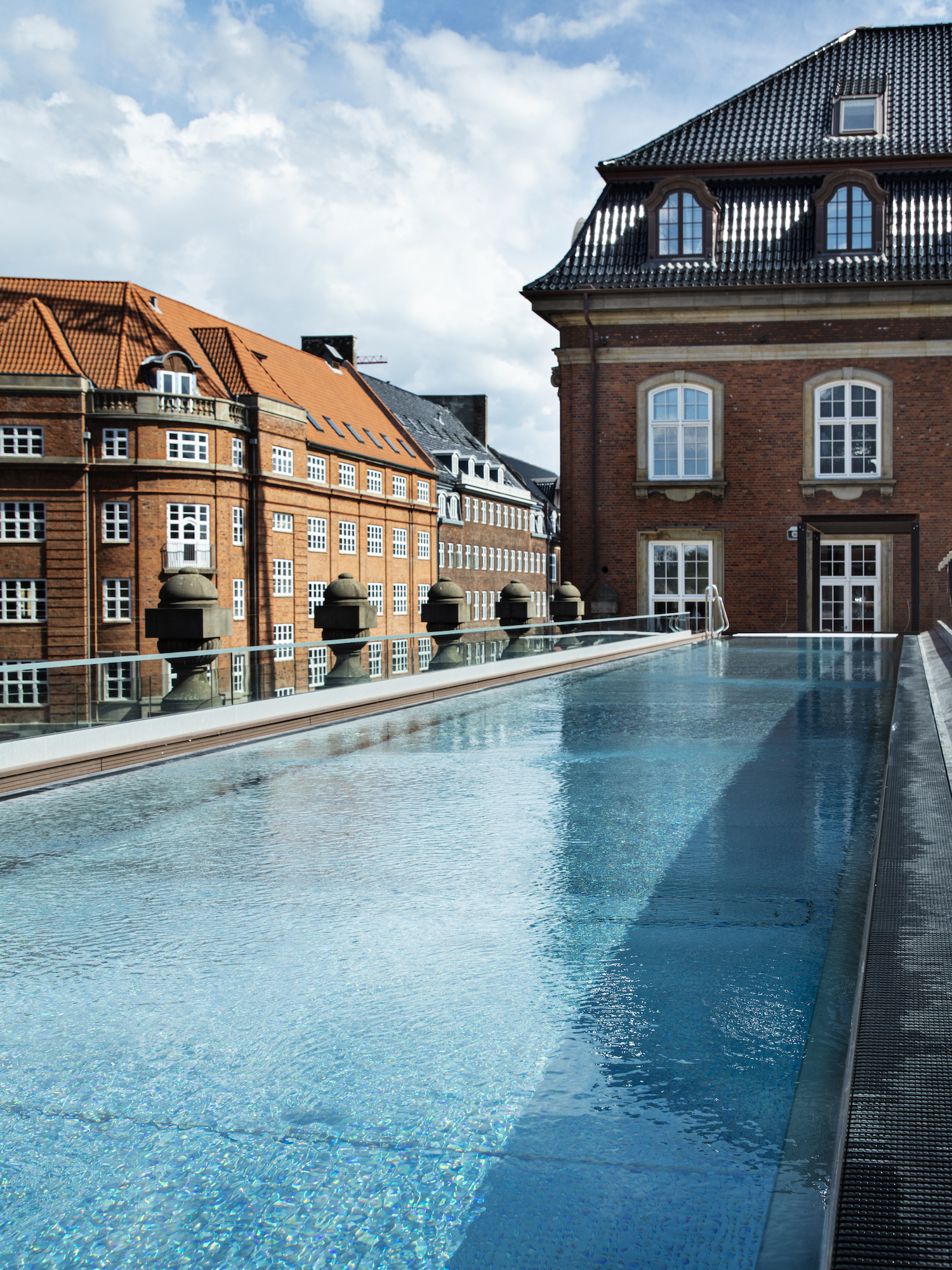 Villa Copenhagen features one of the city’s only outdoor pools. 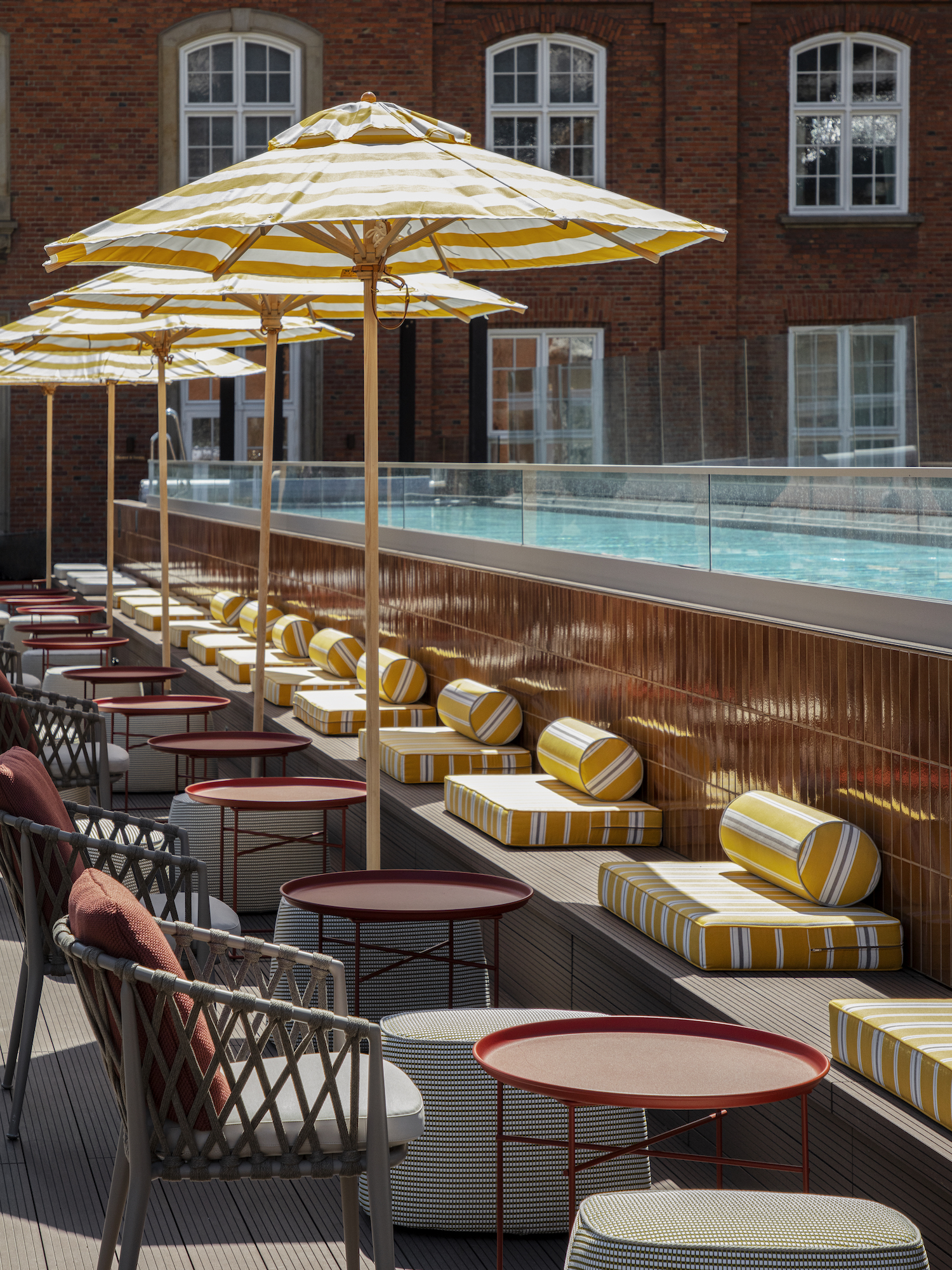 The hotel is set inside the Neo-Baroque-style former Copenhagen Central Post Head Office that dates back to 1912.