Life is never static. Families expand, expectations change, so wanting a bit more space, and then perhaps a bit more, is natural. It comes with the territory. That was the case with this 1920s bungalow that sits on a narrow patch of land in Tāmaki Makaurau/Auckland’s Saint Marys Bay. By the time Nadia and James Magill bought here in 2017, the lean-to (and three and four) added on to the original wasn’t really providing the lifestyle they imagined for them, their two young sons Isaac (4) and Tristan (2) and their tearaway fox terrier. 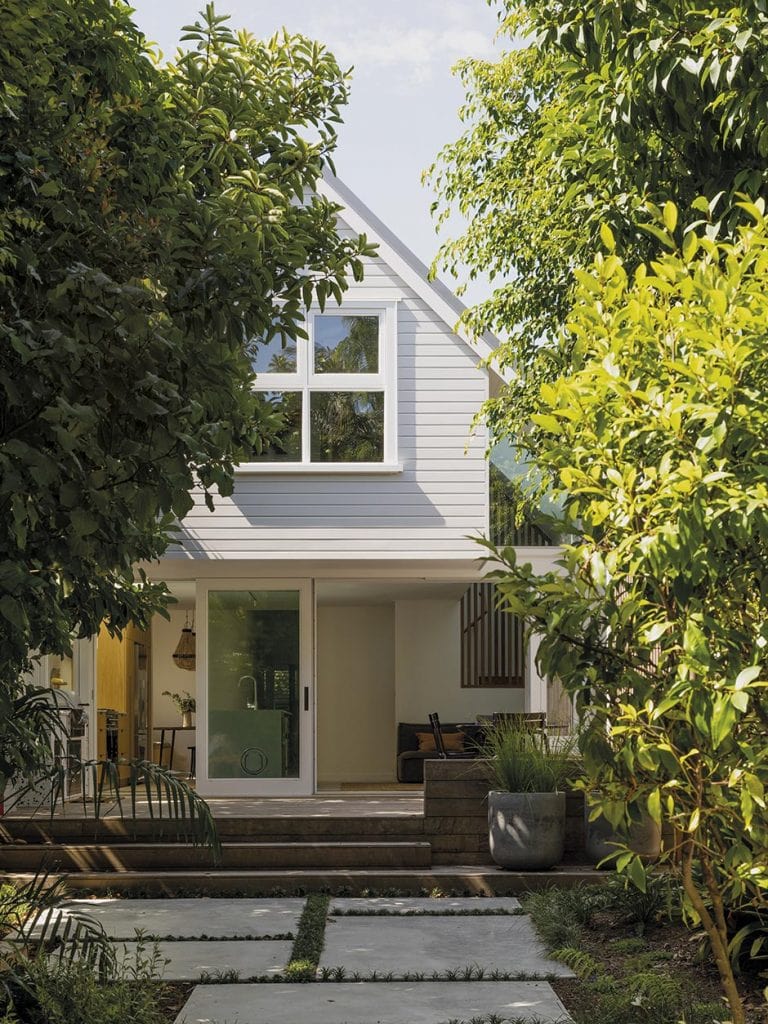 The section, which runs north to south, is only 8m wide. That’s not a lot of room to manoeuvre. And with neighbours up close and personal on both sides and few east-west windows, the two-storey home was dark. It was a daily battle to pass through addition after addition (navigating bedrooms and a laundry) to access the back garden.

As soon as Ben Lloyd and Leila Wrathall of Lloyd Hartley Architects received the brief to alter the dwelling, they named the project Tight & Light after the key drivers in the design solution. The renovation was a significant undertaking, but they had a commitment from their clients to hold fast and see it through to the end. “They understood the process of getting more amenity into the building. We needed a better use of floor space, a more logical flow and more connection to the outdoors,” explains Leila.
She says ‘getting more amenity’ but she means ‘squeezing more in’, aka the ability to make every inch count. Not that this home feels squished: the magic of thoughtful design has worked its miracle. 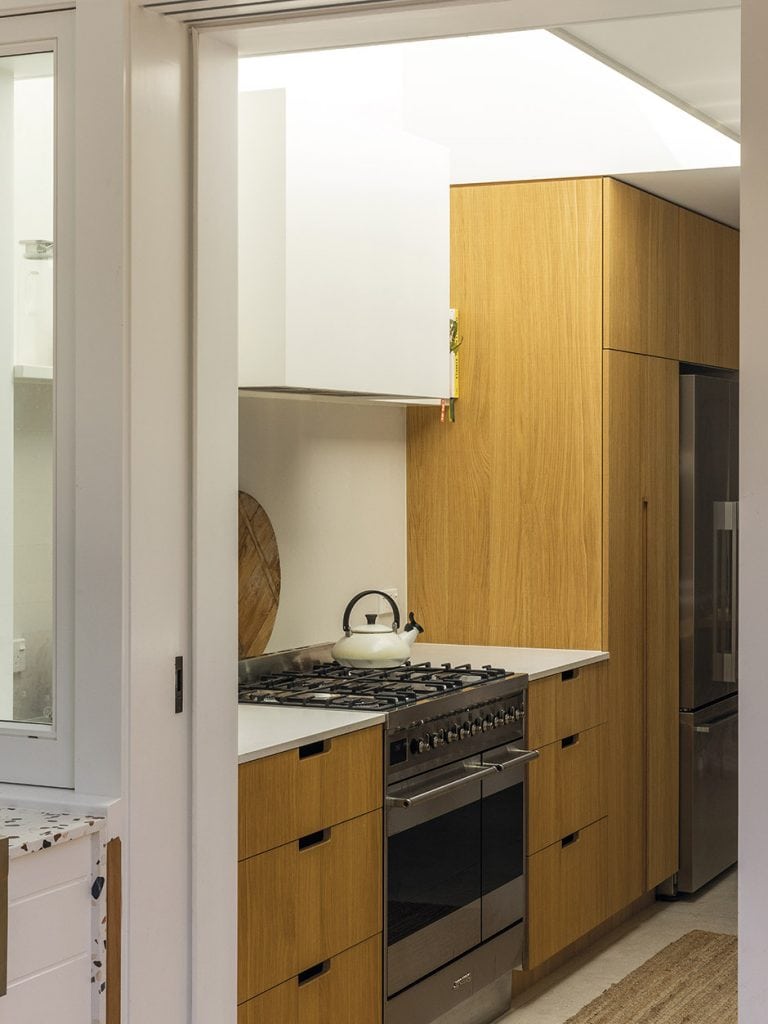 Most of that wizardry happened out the back. It was an easy decision to get rid of years of fiddly additions; not so easy to extend the footprint while assiduously keeping within the compliance parameters of the volume, in a material palette that would merge with the character overlays of the bungalow.
To keep things proportional, the team pulled the ridgeline of the original dwelling all the way through to the extension at the rear; internally, a revised stairwell became the link between old and new. “Matching the existing native-timber floors allowed the addition to feel part of the whole,” says Ben. A slatted timber screen between the stairwell and the living zone serves the dual purpose of bringing material warmth and light into the guts of the home. “We needed to find ways to carve out spaces to draw and funnel light through the long, narrow volume,” explains Ben. 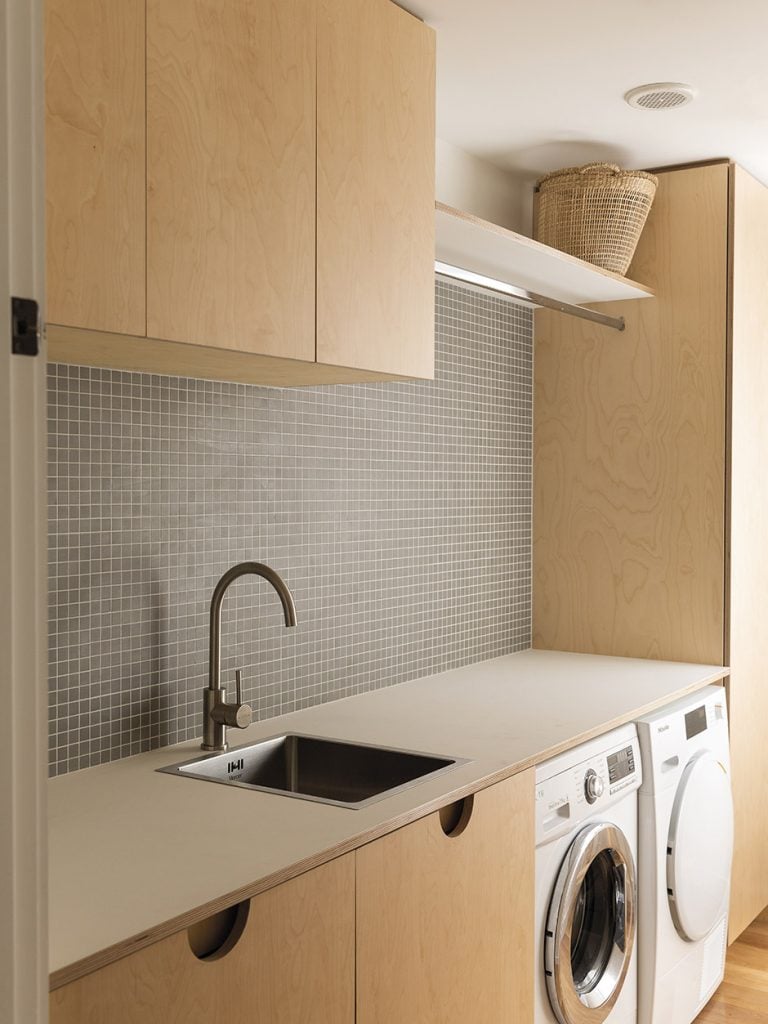 Fundamentally, this is done is from above. The main bedroom on the upper level of the extension is pulled back from the side walls, a volume within a volume that effectively allows a wash of light to spill down either side. In the Japanese way of harnessing the subtle qualities of light, it’s gentle and diffused and has a serene effect. 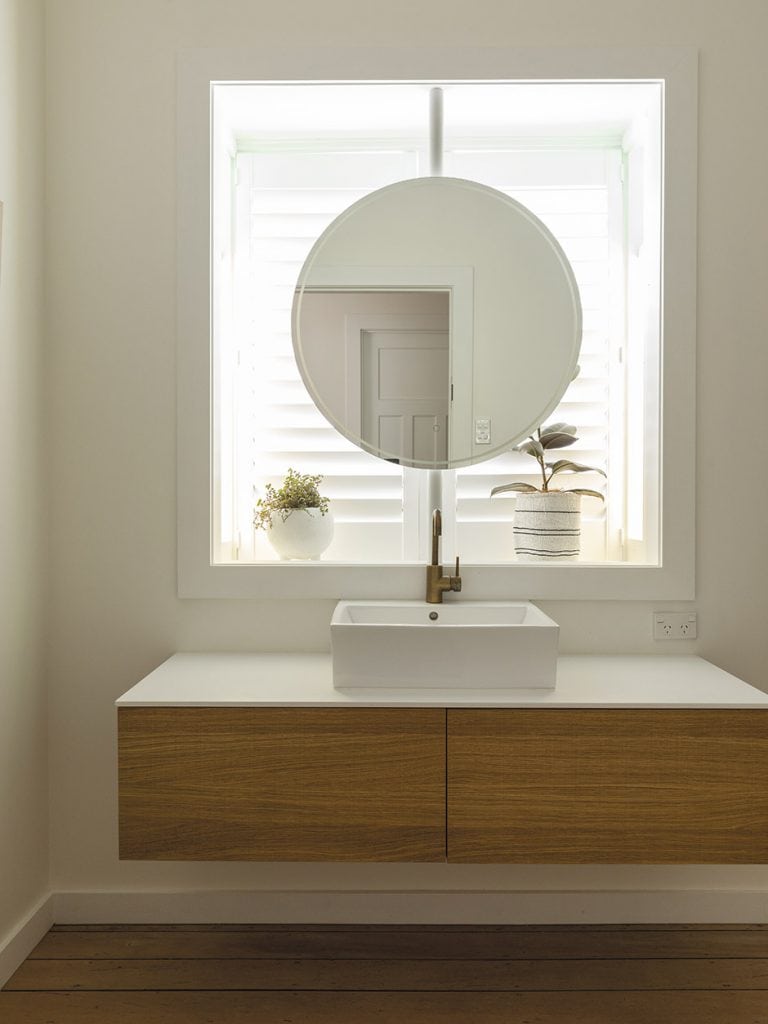 Another strategy to tranquillise the ambience was the use of simple materials. The clients were sold on the earthy tones of oak veneer for the kitchen and bathroom cabinetry, along with Resene Half Rice Cake on the walls, and tiled floors to bring a sense of calm to the open-plan living, kitchen and dining area, which the architects have managed to map into a mere 36m2. 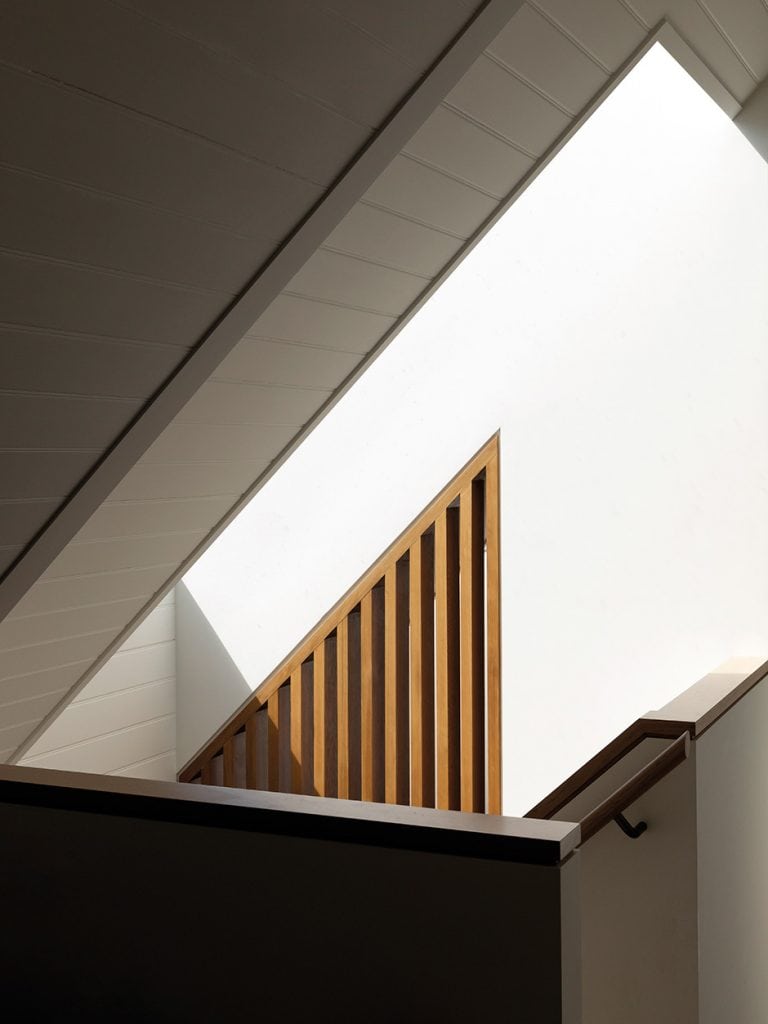 The finishes are natural, the furnishings pared back, and textural touches are thrown in via jute rugs, woven baskets as art and teardrop shell chandeliers. “I think I’d describe our style as urban rustic,” says Nadia. “We chose aged brass rather than chrome for the tapware, wool carpet, and materials like timber, stone and linen.”
Smaller design details have also made a world of difference. Rounded edges on the wall that provides the flow between stairwell and living and the one that edges the dining area and hallway are a sinuous strategy that the architects fought hard to keep. “It’s about softening the junctions,” says Ben. “These curves play off each other and bring in some playfulness.” 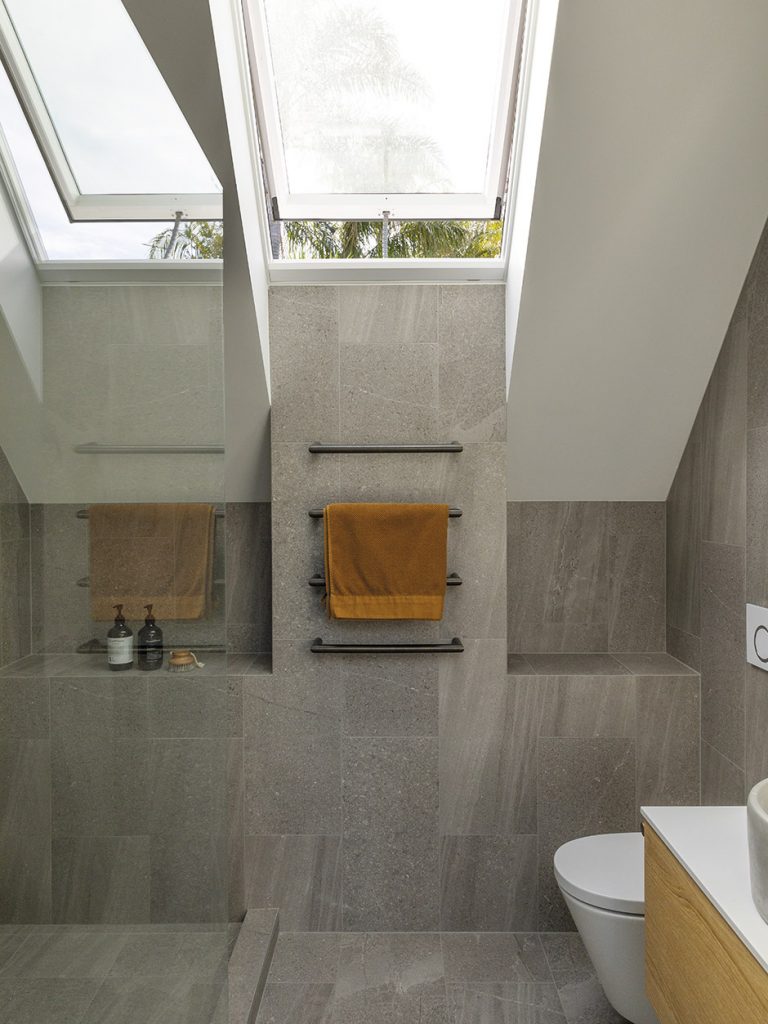 A fully glazed end to the home was a given for two reasons. First, did we mention the light? But also, the garden — a well-established paradise that’s rare within such an urban context. A fixed-panel door that aligns with the kitchen bench means simultaneous access to the outdoor kitchen (a natural continuation of the indoor one) and the al fresco dining area with its built-in bench seating.
Covered decking amplifies the living, and greenery draws out explorers both young and old to pick a pathway to the far corner beneath the trees. “By the end of the build, we’d run out of budget but not enthusiasm, so James lost a lot of weekends and evenings to that garden,” says Nadia, whose job it was to plant the miniature mondo grass between the pavers. With trees shading much of the property, a regular lawn was never going to work. 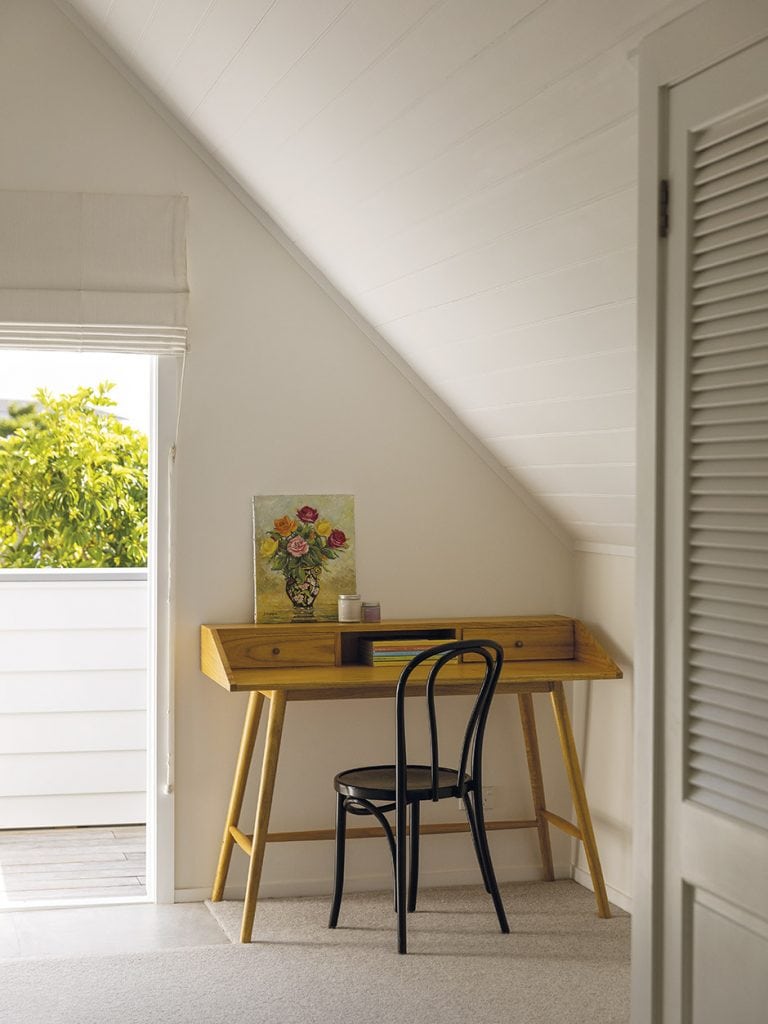 From the street, not a lot appears to have changed: the front door with its heavy brass knocker is still in situ, original windows remain and an old balcony was rebuilt to be safe and solid. Yet the owners say updating the four-bedroom home has been life-changing. There’s a proper entry with storage for bags, shoes and coats at the front door, underfloor heating that makes for cosy winter mornings, the dishwasher perfectly positioned to put the dishes away without having to walk the length of the kitchen, and electric skylights above the showers that allow steam to billow outside. Nadia sums it up when she says, “Each space isn’t massive but because it all comes together cohesively, it feels like the perfect amount of room for our family. Every bit of the day is just better.”