Sculptor Simon Lewis Wards didn’t fit the school system particularly well, so he left in his early teens, and in a fortuitous twist, ended up helping out his mate’s dad (the late John Croucher, a pioneer in Aotearoa’s glass-art movement in the ’70s) in his glass studio. During the wayward years that followed, Simon jumped from job to job, before finding his way back to glass and starting to sculpt it seriously in his early 30s. 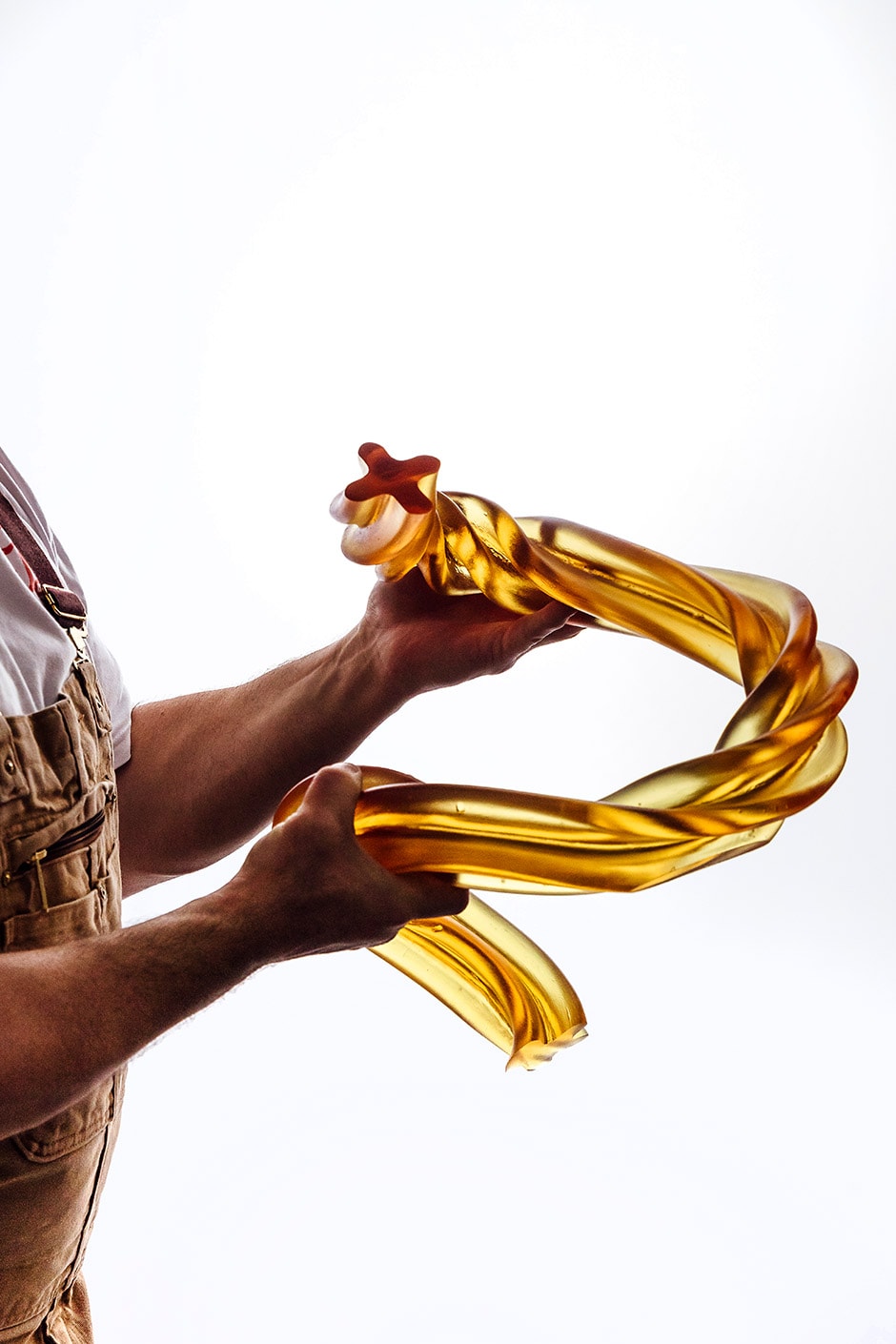 So Simon, what do you like about glass’s capabilities? I’m naturally a bull at a gate, but working with glass over the years — especially the laborious lost-wax casting techniques I use — has taught me to slow down. I listen to my intuition when I’m working with glass and because of that, I probably do so more in my everyday life as well. Before the glass breaks, I’ll get a feeling I should stop; I listen to it about half of the time now, which is much better than 10 years ago! 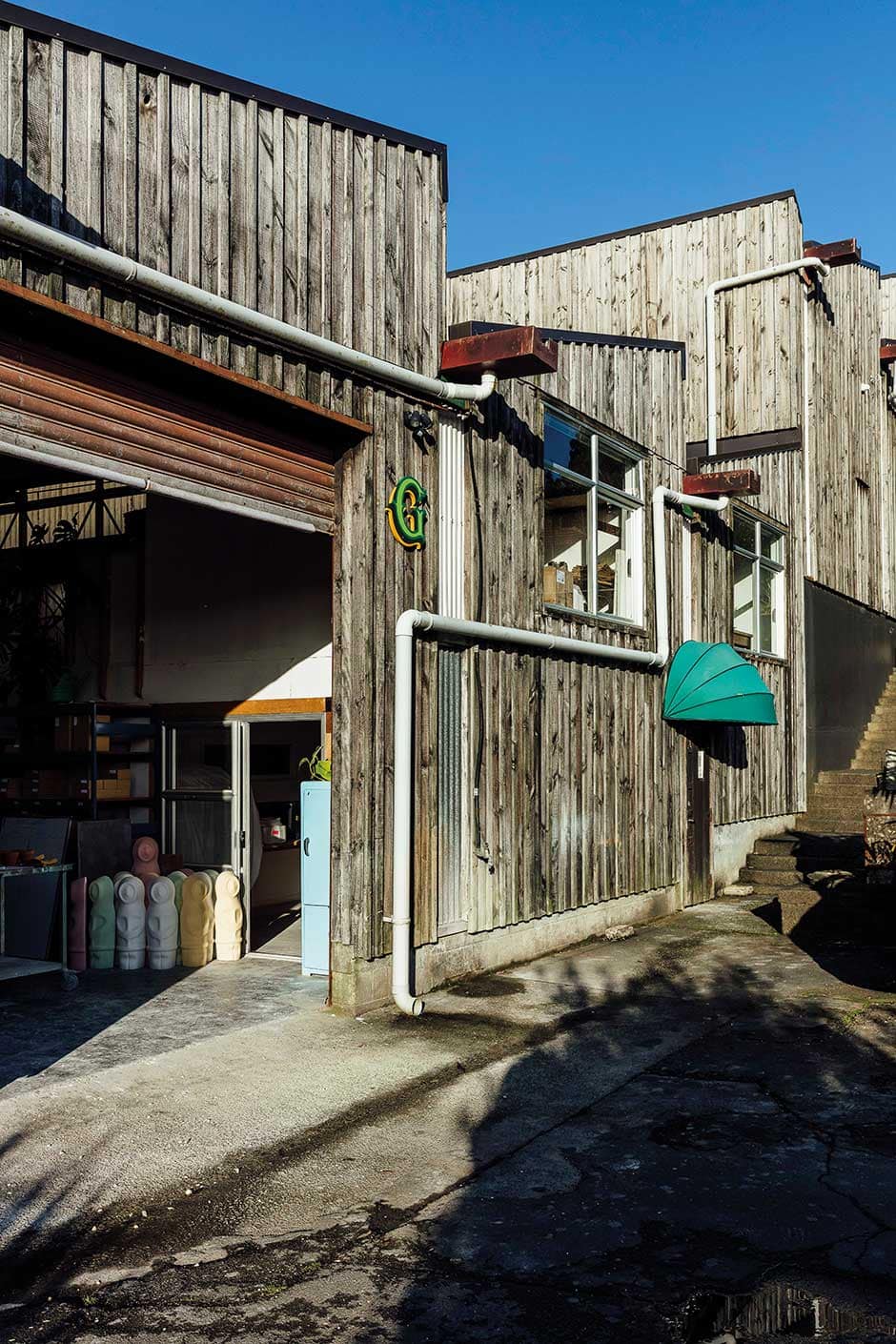 Your classic Kiwi confectionary-themed works are icons in their own right — how did you originally land on them? I feel like the idea for that work existed outside of me. I remember looking at crushed coloured glass early on and thinking about how much it looked like sugary jubes. The glass essentially told me what to make.
The most special aspect of the candy is how it triggers memories and stories for people. Nostalgia is a fascinating thing. People see the candy and are transported to a time in their lives, a memory, a relationship… It feels kind of magic. 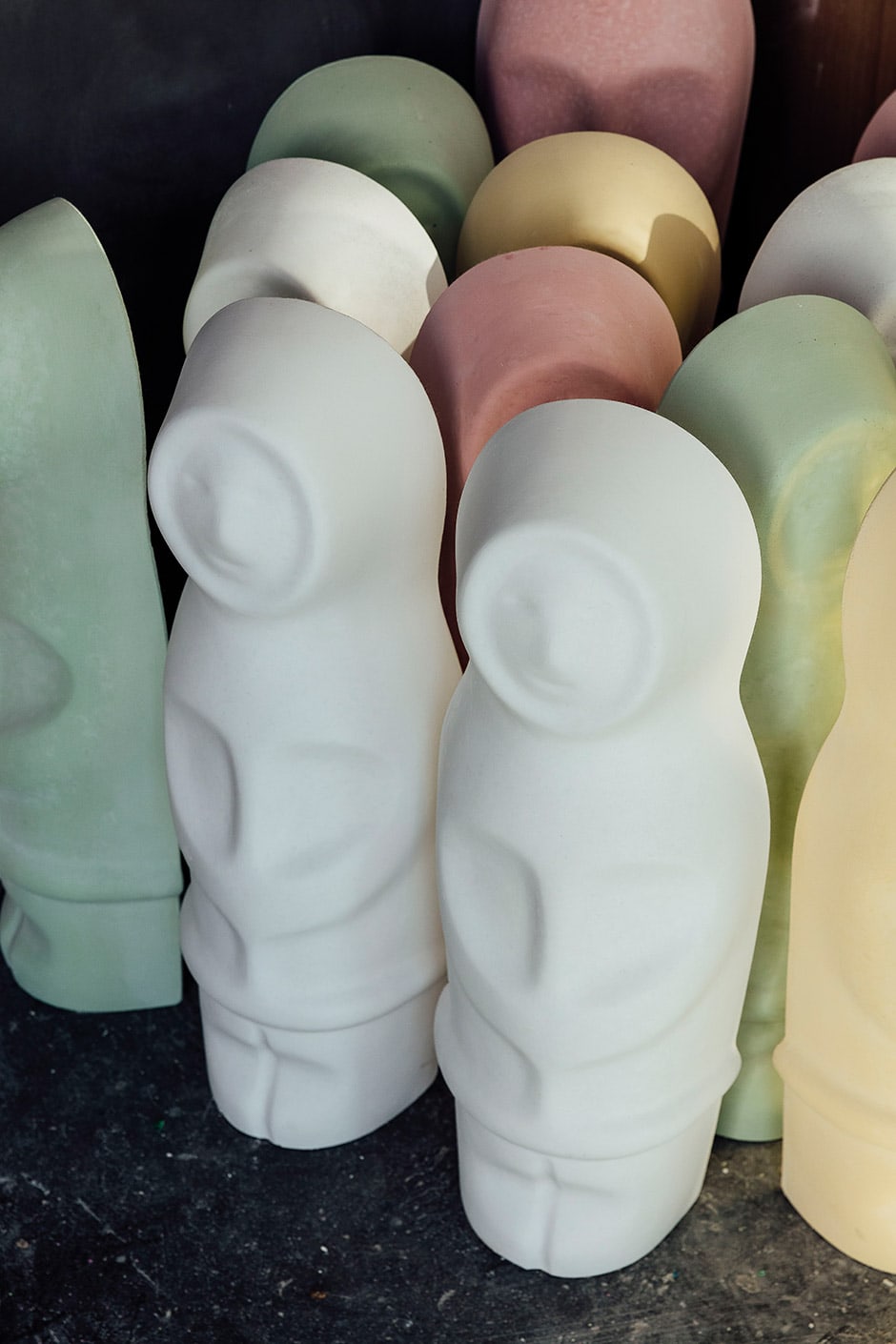 You’ve recently been exploring more sculptural pieces… As I’ve been making these twisted forms, I’ve realised I’m tapping into my first art practice, graffiti — more specifically tagging and one-liners using one long, unbroken line to express flow and movement. Even though I don’t graffiti on walls much anymore, I still tag on paper every day — I’m an A4 gangster, if you will! The twists feel like I’m tapping into an innate style and muscle memory developed over decades, but in 3D form. 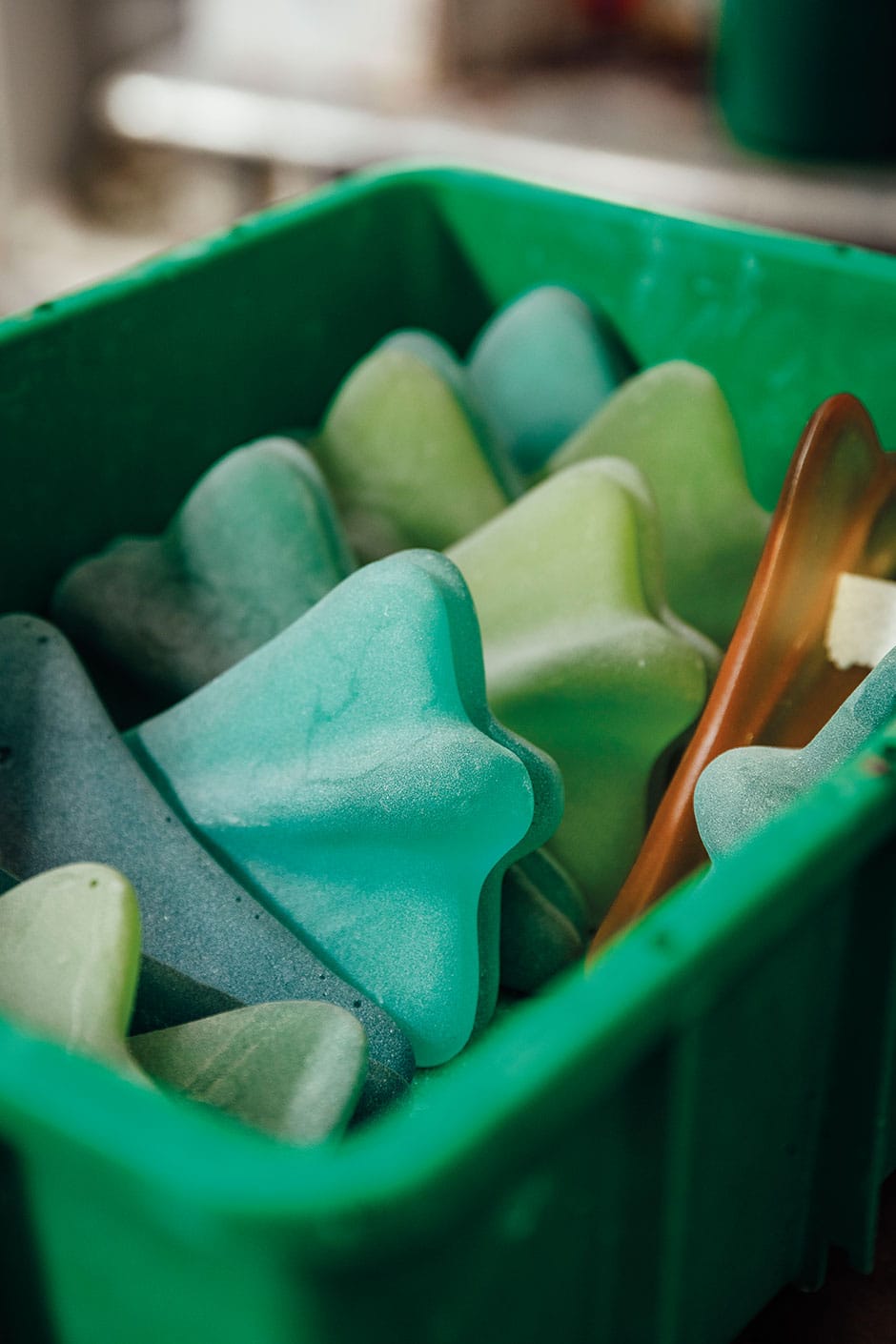 Are you utilising new techniques? In my humble opinion, raspberry licorice twists reign supreme visually in the candy world. I’d been thinking for a few years about how best to translate this form to glass, then the idea came to me at 2am — as many do.
Lost-wax casting is a common technique used when making unique bronze or glass sculptures, and I figured while the wax was cooling I’d have a small window — which turns out to be around 10 minutes — to twist and manipulate it into a shape I’m happy with. I don’t have a plan for how the twist will look until the wax touches my hands. This combination of spontaneity and a short timeframe is new for me, and I love it. Only about one in four of these waxes makes it to glass, so it’s a high risk, high reward-type situation. 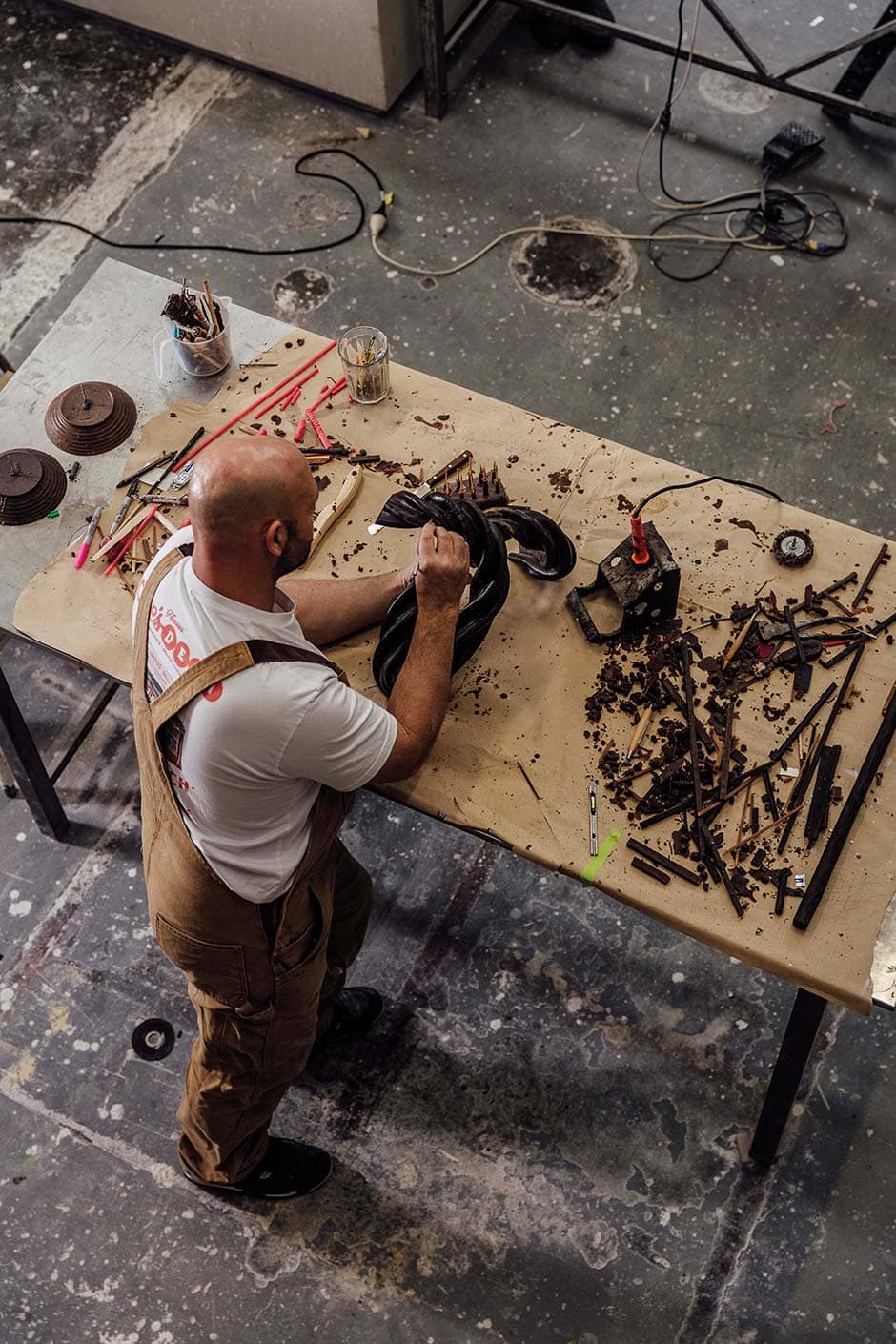 Your twists will be on show at Tāmaki Makaurau/Auckland’s Masterworks Gallery soon… My solo show with Masterworks opens at the end of October and it’s the first time I’ll be exhibiting the twists en masse. Masterworks has a history of working with the best glass casters — Ann Robinson, Layla Walter and Christine Cathie being a few I admire. These women are icons of their craft, and I feel humbled to be in such good company.

What would be your dream commission or project? My dream commission would be a public work at Gibbs Farm [on the Kaipara Harbour]. I love making large-scale public pieces, and collaborating with architects and others who are passionate about their craft is extremely inspiring.
As far as a dream project goes, I’ve been thinking a lot about how I can work with young people again — it’s something I did with Youthline in the past and loved. I’m still in the discovery stage, but I’m weaving together stories from other makers and entrepreneurs who were made to feel ‘less than’ by the system and left school before finding the vocation that saved them.
I’d love to help support the creative and entrepreneurial spirit in kids who are struggling in traditional structures. I feel extremely lucky that I had people in my life like John and his son Luke Jacomb [of Lukeke Design], who showed me what was possible, and I worry all the time about kids who don’t have that put in front of them. My art now allows me to support myself and a small team, so it feels like the right time to pay it forward.