It’s our forever home,” says one of the grateful owners of this sophisticated Whāingaroa/Raglan abode, situated on a one-way road following the Waikato town’s water’s edge. The northern, ocean side of the street is dotted with proud pōhutukawa, while the southern side is lined with houses that, like this one, can see the sea beyond the trees.
The couple and their two children have owned the property since 2004, but it was only recently that they decided they wanted to move here to enjoy life in this charming village full-time. Their brief to architect Richard Priest was a house with a gabled roof, raked ceilings, maximum space and views, multiple indoor and outdoor living areas, three bedrooms and lots of storage.

“The concept is based on the fact that they wanted to make the most of the water view and sunshine,” says Richard. “At the same time, this is a fairly public road, so privacy was a major factor, as was retaining the feel and intimacy of a coastal bach. The use of the house follows the sun throughout the day and there are three distinct outside spaces integrated into life here.” 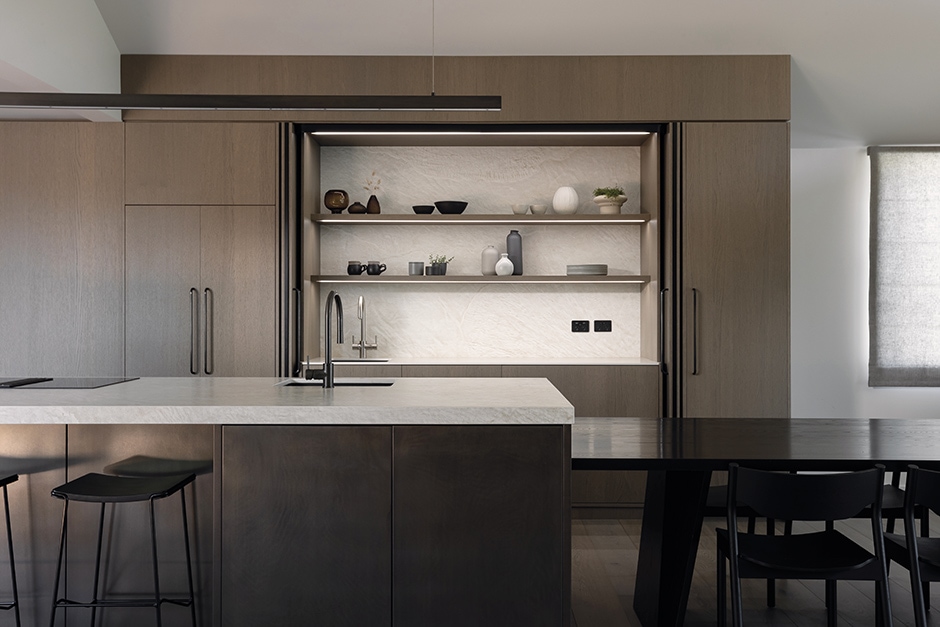 The dwelling’s subtly weathering exterior of board-formed concrete and charred larch timber provides a nod to a traditional bach aesthetic, yet has a contemporary appeal. “It’s a beautiful, cohesive home with such a welcoming vibe,” says kitchen and interior designer Annika Rowson of Rowson Kitchens. “It’s not a huge house, but it just feels so right.”
With a carport and studio underneath, the single-level floorplan positions the kitchen, dining and main living area at the northernmost part of the site, where they enjoy a direct view of the water. They’re connected to a large deck that benefits from a generous eave that provides protection whatever the weather. In contrast, the secondary outdoor living space is more private, comprising a walled courtyard area partially lined with larch and covered with an adjustable louvre roof. 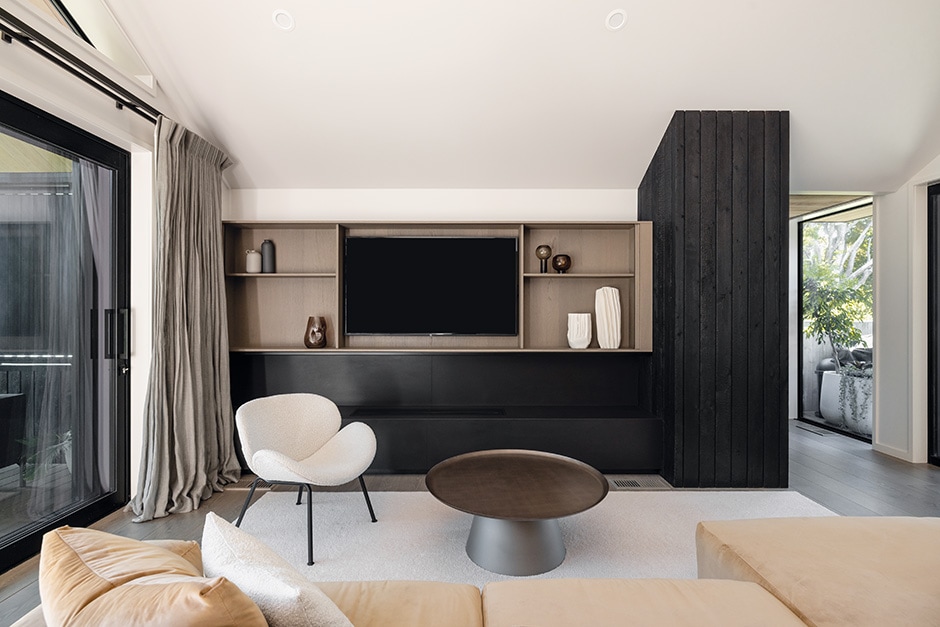 Inside, the cathedral-like raked ceiling in the main living zone gives the home an impressive sense of space. When she met her clients on site for the first time, Annika says she was also immediately wowed by the view, “so I knew the kitchen design needed to be soft and natural to continue out into that environment.” Oak veneer was chosen for the cabinetry, complemented by benchtops in a surface Annika describes as having “a fossil-like effect. It’s an incredible texture that seemed fitting given the location.”
The central element in this space is a generous island with a dining table at one end, plus there’s a fully appointed butler’s pantry that’s designed to be used for food preparation and clean-up, and as a breakfast station. The entire scheme feels remarkably serene. 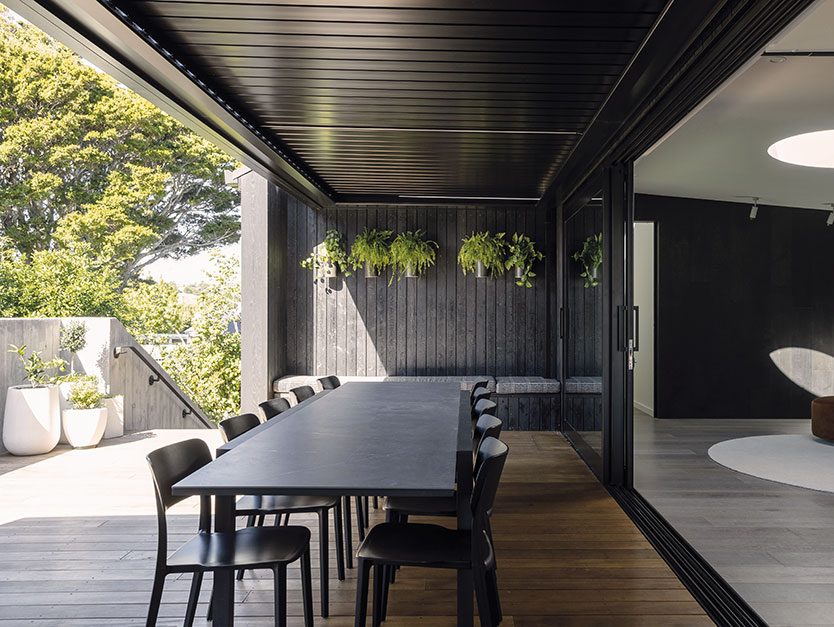 For Annika, though, one of the ultimate spots in this house is the media room, which is illuminated by a tailored circular skylight. “The way the large window throws light is quite beautiful,” she says. “We custom-made a sofa to fit underneath it and the rug is custom as well — it was all about the curve.”

The material and colour palettes cohesively continue through the three bedrooms and into the bathrooms, where the vanities have been constructed from the same material as the kitchen benchtops and are full-formed, so they’re completely seamless. In the main bathroom, a bespoke bronze-framed shower with textured glazing is backlit from above by a roof window and seems to glow. This window is automated, so it can be opened and closed for ventilation as required. 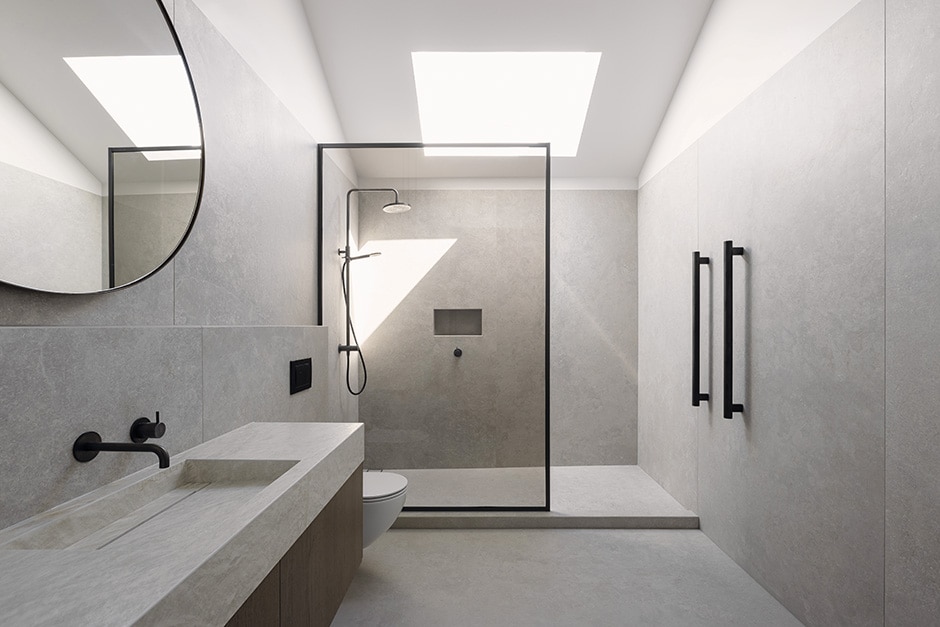 “The design of this home is very well-considered,” says Annika. “It just feels so calm, inviting, comfortable, restful and gentle — much like a soothing hug.”
Meanwhile, the rapt homeowners recall that the best thing about building this home was having such an amazing team, including Annika and co at Rowson Kitchens, builders Fitzgerald & Gillard, tilers West Coast Tiling and Graeme Burton of Rukuhia Homestead Landscaping. “We’re so happy living here and wouldn’t change a thing.”