Everyone knows that renovating a character home — such as this one built in the ’30s — is like opening a box of chocolates. In Forrest Gump style, you never know what you’re gonna get.
Forrest’s momma was wise in this respect: once the lid came off this Westmere property, there was a selection of surprises inside. The roof itself needed replacing, the insulation was shot, the exposed ceiling beams had done their dash, and many of the kauri floorboards had moved past characterful to downright dangerous. 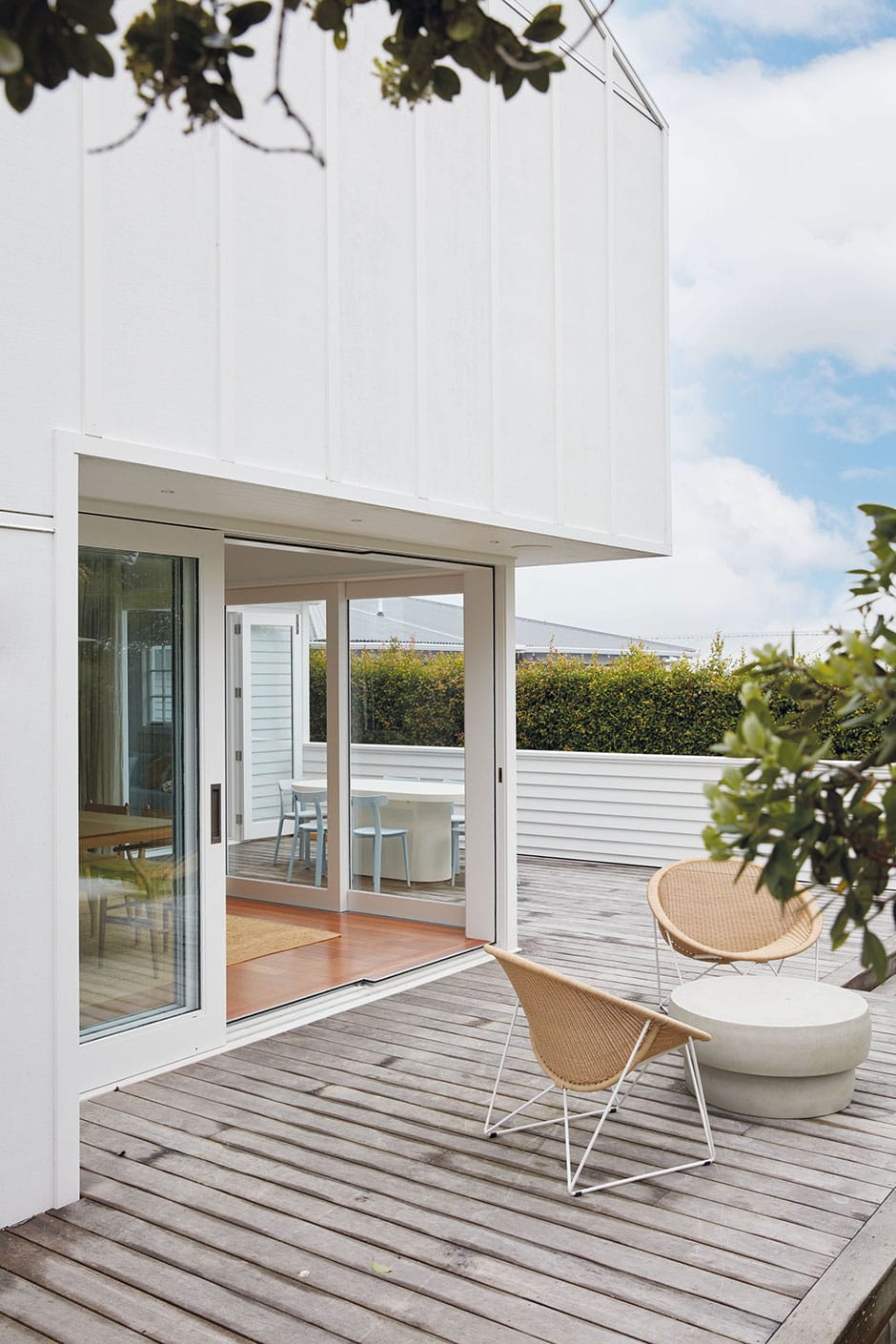 “In the initial couple of weeks when parts of the house were being demolished, I thought, ‘What have I done?!’” recalls the Tāmaki Makaurau/Auckland owner. “It was emotional to let go of the old.” But then, once building started, a bit like childbirth, all was forgotten.
Architect Belinda George shared her client’s love of heritage. “I have a thing about the urban fabric of long-established suburbs being destroyed,” she says. Although the two-bedroom home was “tiny and typical”, it was important to preserve the narrative of the neighbourhood. That meant disguising any substantial renovation from the street.
One change on the north-facing frontage they did consider was to add a carport. That cost became prohibitive (ever tried getting a power pole moved?), so they opted to wait for the council’s own undergrounding project instead. 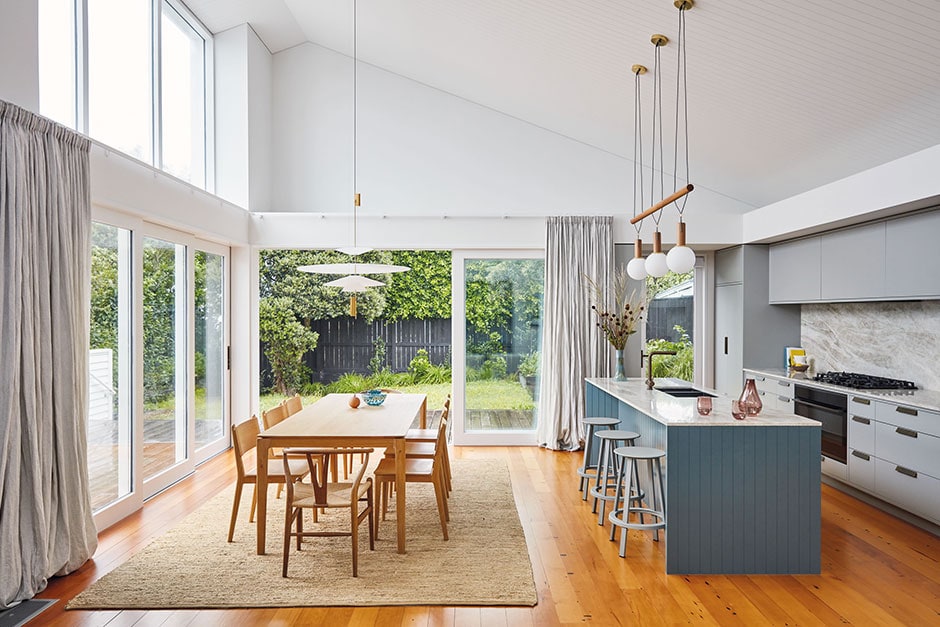 The owner’s brief to Belinda was based on happy memories. “I grew up on a quarter-acre section — a house with a yard was what my childhood was about,” she says. She wanted her five-year-old son to be able to kick a ball around. She wanted a dog. “I didn’t want a great big house with no land. I wanted it to function well for us but also to feel a bit bachy and intimate — so small and big at the same time. If that makes sense?”
To Belinda, it did. She set about the illogical challenge with enthusiasm. With a swipe of her hand, she had the dysfunctional lean-to demolished, then knitted two extensions into the original. Not that you’d immediately realise. Driving by, the curious might discern the peak of an extra half-gable roofline behind the bungalow. The canny might spot a second ‘front’ door. A new entry hall now runs along the western elevation; in anticipation of that future carport, it’s accessed by its own door, a facsimile of the bungalow’s. This hall contains a laundry and lots of cupboards.
“That’s another typical original ‘feature’ of character homes,” says Belinda. “No storage.” 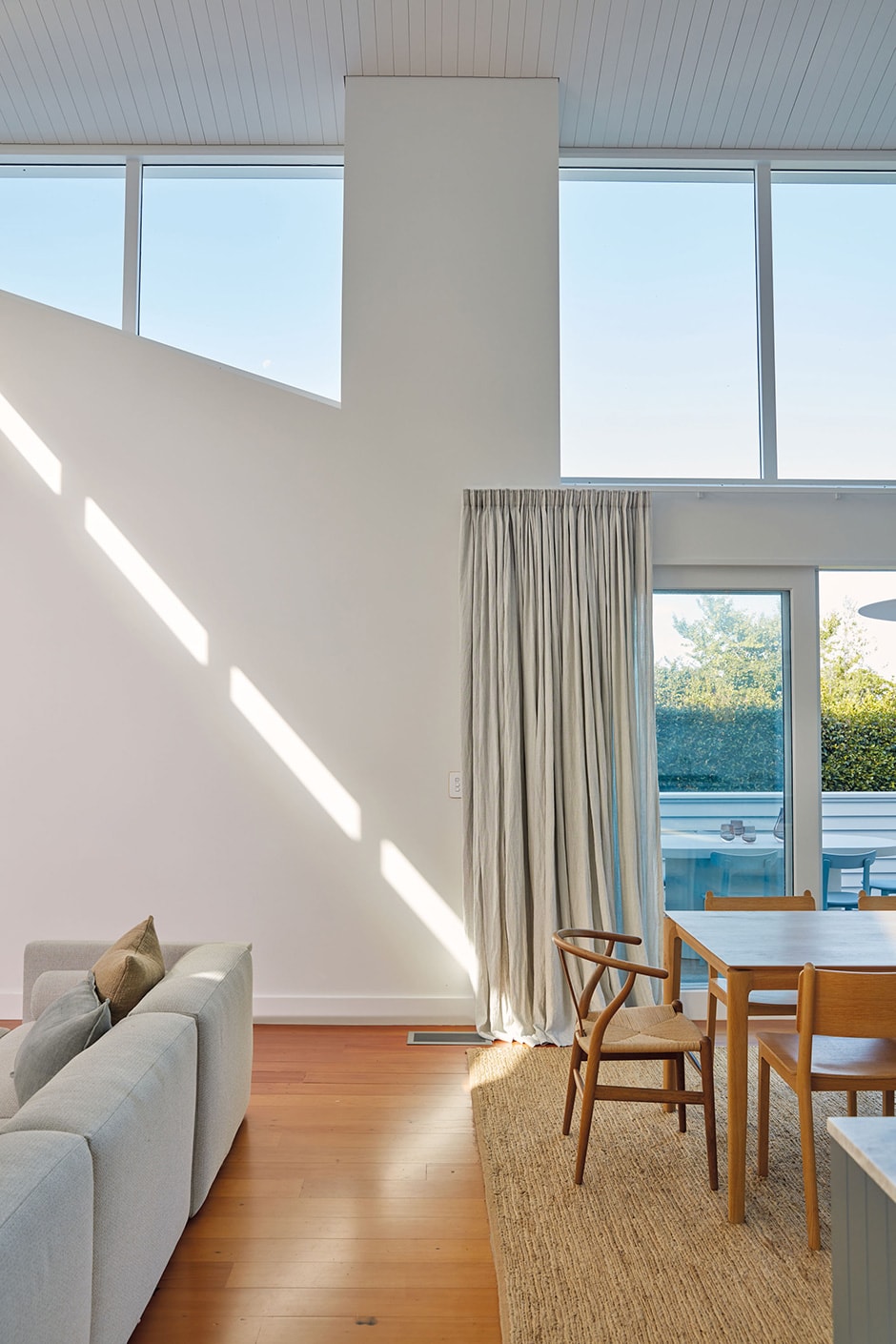 Of course, genuine character details were kept or reinstated. The existing front door with its three angular slot windows was rebuilt. In the bedrooms, exposed ceiling beams were copied, and the leadlights retained. The single bathroom was given a makeover, but a separate loo added so no one’s inconvenienced by long, hot showers. A third flexi room — for TV-watching, playing with Lego, office work or an extra bedroom — was slivered into the footprint and has all the bases covered.
But it’s the expansive new living zone that now connects to the back garden that grabs the limelight. With ceilings that stretch up to over 5m, it feels like freedom. Light spills in through clerestory windows on the eastern and northern sides, and sliding doors access a wraparound deck. “Height and volume are the main joys in this project: it’s what we celebrate,” says Belinda.

Viewed from the exterior, weatherboard still clads the original section, but this addition is in white board-and-batten and is double skinned, meaning gutters, downpipes and even the gas water heater are hidden. “It keeps the form pure,” says Belinda. “In architecture, I love dominant forms to be unobstructed.”
Within the simple, striking geometry, the open-plan kitchen, living and dining space is cosy and homely. Friends of friends, interior designers Maria Diaz Valentin and Sebastian Negri of StudioStudio, were initially enlisted to help with the lighting. It turned into a bit more than that.
The owner admits she’s not a visual person so appreciated their help to select colours, tiles and other items to personalise the rooms. Sticking to natural materials was a grounding principle to ensure the choices were more timeless. The kitchen island, originally envisioned as sage green, is clad in ocean-blue tongue-and-groove panels, a block of boldness that makes the room family-friendly. With warm, creamy tones and an exotic grain, the granite benchtops are subtly sophisticated, and aged brass tapware here and in the bathrooms is fittingly nostalgic. 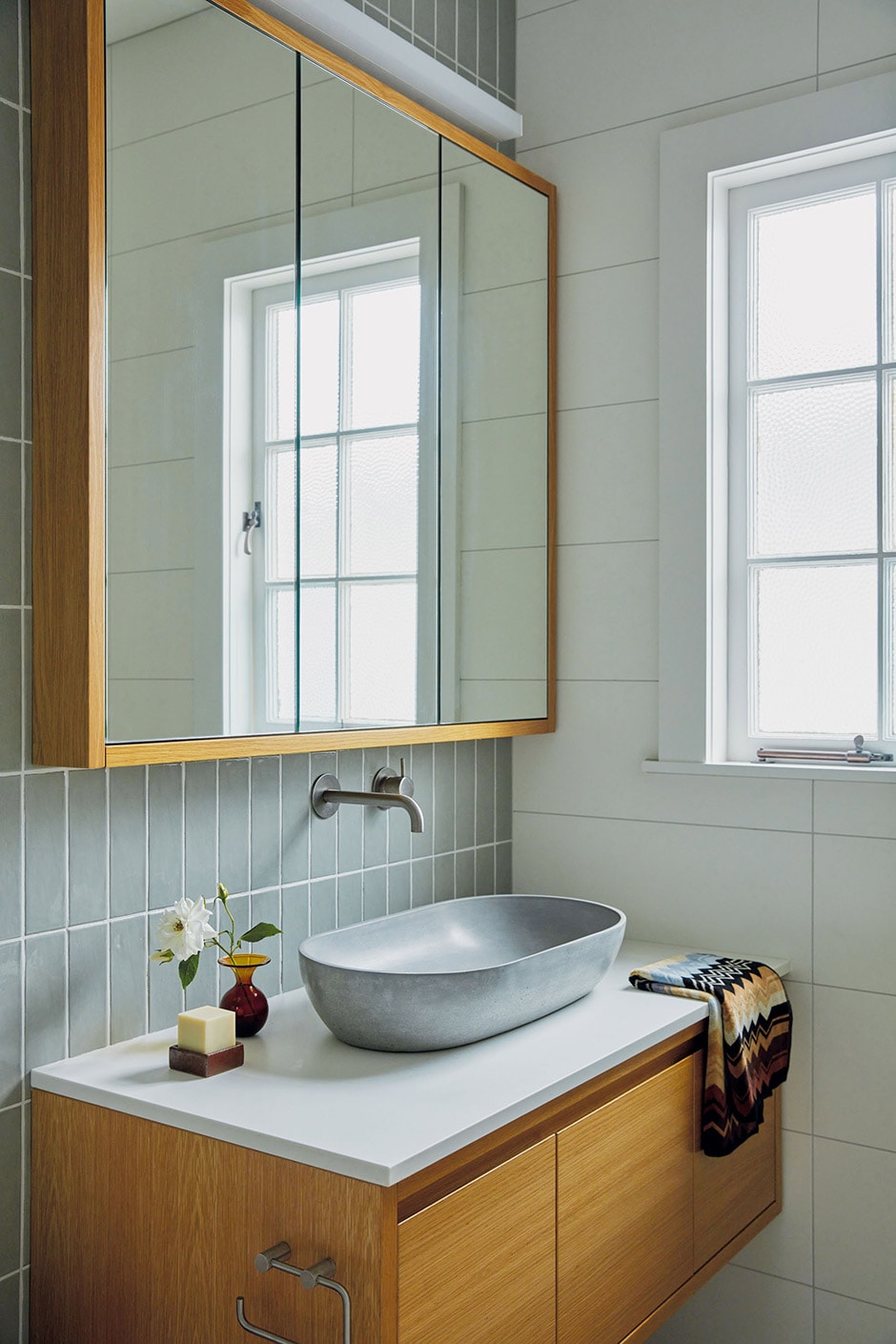 Of a morning, when the early light streams through the leadlight windows, this space is a joyful place for coffee. The owner throws open the doors to the sound of tūī in the trees. While she may have fallen in love with a bungalow, it’s just possible she loves its modernised character more.