AW Architects’ Lake House honours heritage and place, yet is anything but expected

From afar, this trio of silhouettes huddled together beside a pond could be mistaken for agricultural buildings. On arrival, you learn that although they’re structurally similar to the humble forms of the local rural tradition, these buildings have been designed not for farming but for living.
In the Wakatipu Basin, you’ve got your pick of majestic mountain views. Christchurch-based AW Architects’ sights were set on framing moments within the landscape, rather than exposing all the scenery all the time. “The brief was pretty clear that it was not to be a big glass pavilion,” says principal Andrew Watson. “That was the big one, really, that it needed to be designed as a refuge within the rugged environment and of the place.

“The whole idea of the local vernacular sounds like a cliché in a Southern Lakes District context, but that’s the reality — this is where the clients grew up and this is their experience of the local architecture,” he continues. So he and project architect Prue Johnstone (who was on the AW Architects team at the time) devised a plan that would gather together three forms rooted in agricultural aesthetics — two ‘sheds’ and a ‘maimai’ — each with a distinct purpose. The home’s main door is set deliberately deep into the first (guest) pavilion, which houses the guest quarters, the laundry and the garage. Beyond this, a ribbon of in-situ concrete runs through the house, leading you through a glazed walkway of Metro Series custom windows from First Windows & Doors to the second (living) pavilion. 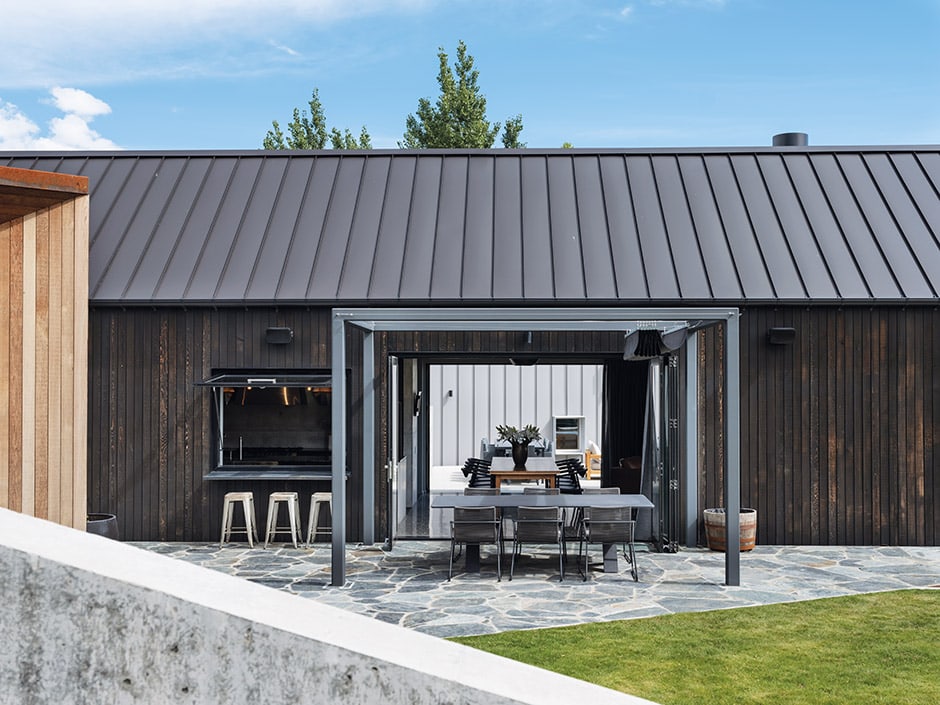 “The challenging thing about creating three quite distinct pavilions is — for me, anyway — that you want to arrive into the heart of the house, which in my mind is the kitchen, without transferring past everyone’s bedrooms and the bathroom,” says Andrew. “The concrete that runs through this house drags you from the front entrance and swiftly gets you to the kitchen, without realising that you’ve been through half of the house already. It was a bit of a trick, really.” 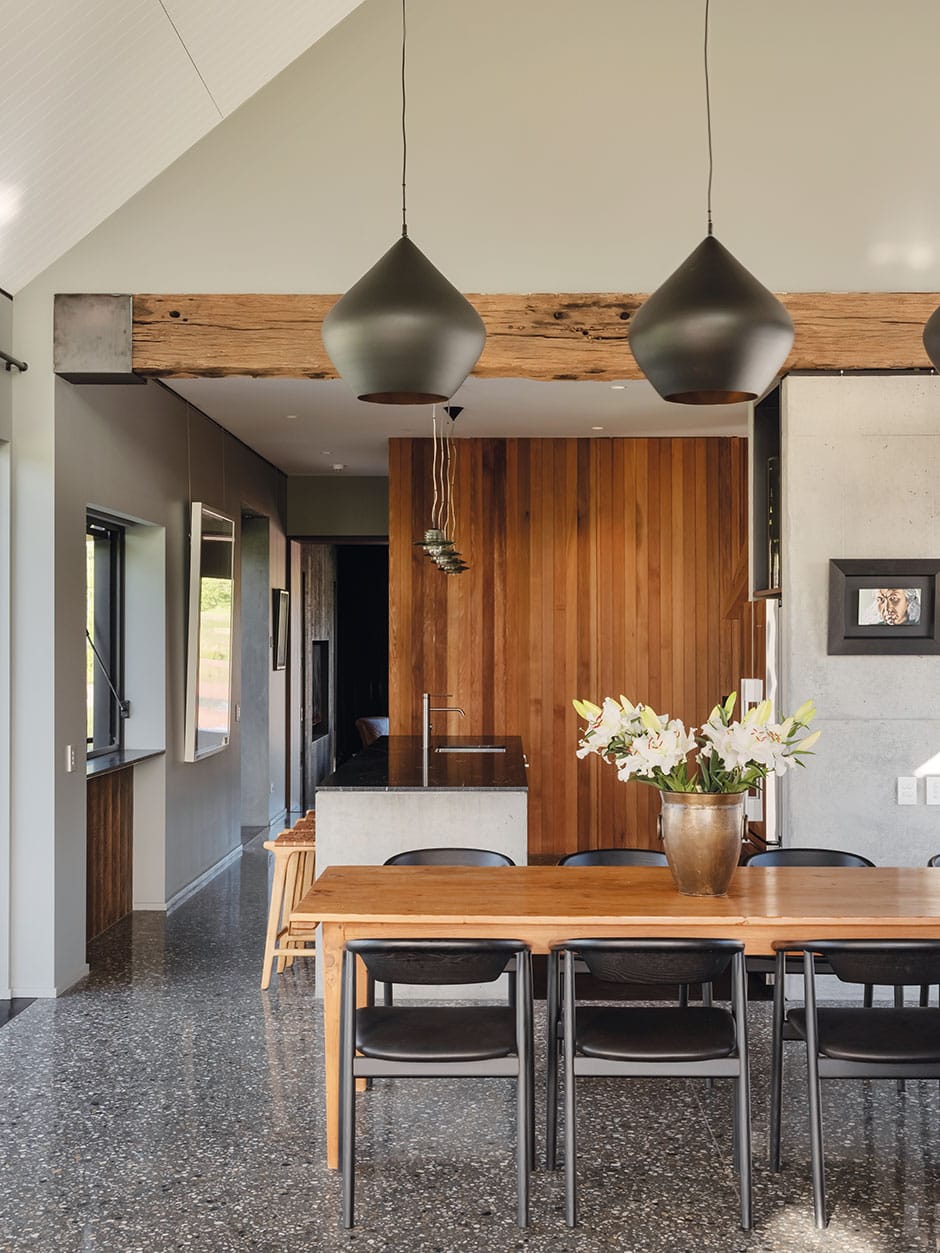 The domestic journey continues through another glazed walkway connecting the public sheds with the private zone of the home — the maimai, as it’s known. Much like its namesake, this space has been designed to cling to the lake’s edge, but with a few more creature comforts than birdwatchers and duck hunters would usually expect! Here in the main bedroom and adjoining bathroom, the concrete theme continues with a Thermomass wall that reaches out to a covered alcove connected through glazed stacker sliding doors from First Windows & Doors. Set into a rolling hillock and shrouded in naturally weathering timber and Corten steel, it really makes you feel as if you’re at one with the landscape; it’s a true escape in which the owners can enjoy their own private view of the serene scene beyond. 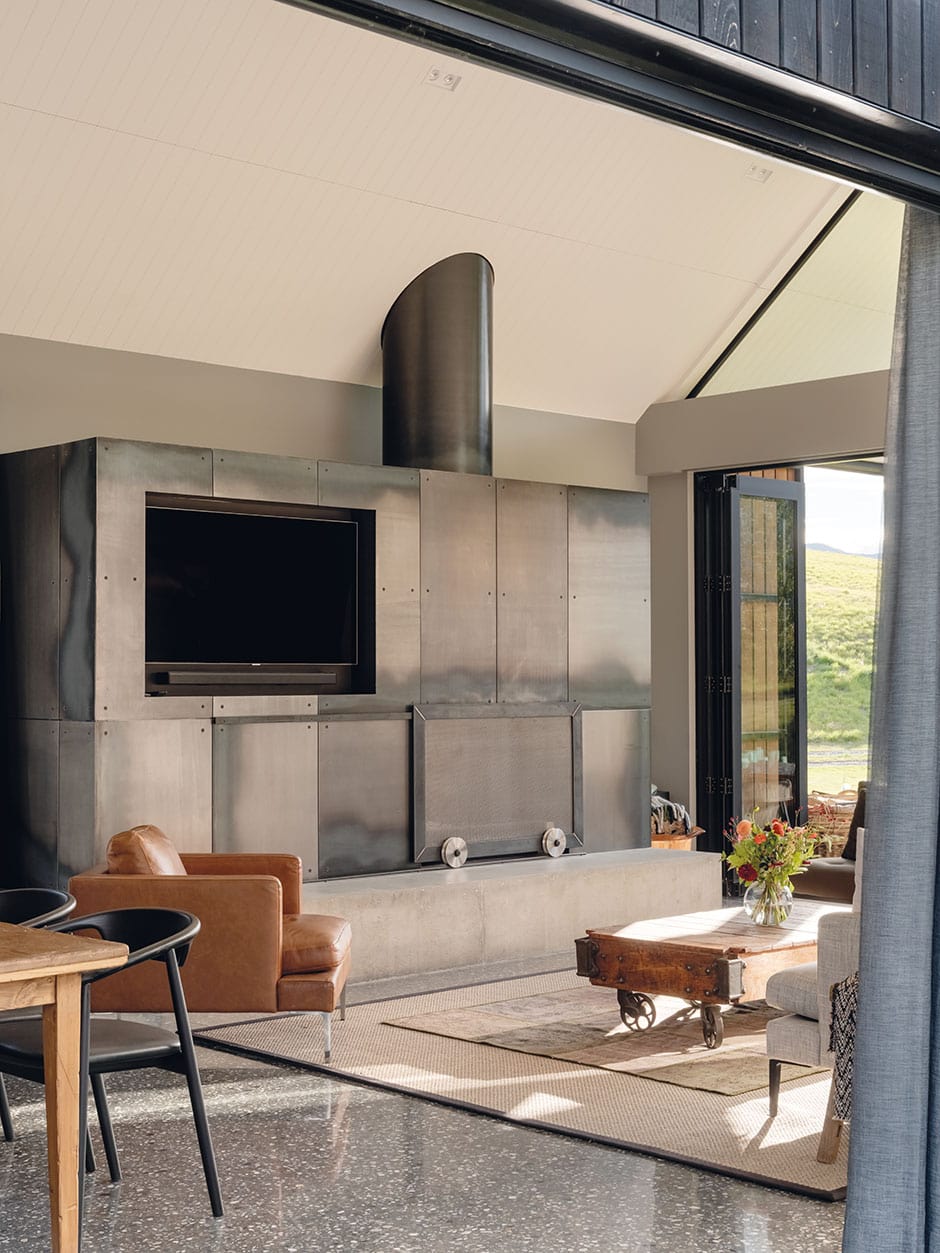 In contrast, the sheds stand proud against the rugged ridgeline. Deceptively simple in form, each is given its own character through meticulous detailing. The living pavilion is clad in black cedar, selected for its warmth and tactility to reflect the communal goings-on in this shed, where family time unfolds in the kitchen, dining and living areas. Here, Metro Series ThermalHeart bifolds can be flung open to let the easy living continue out into the enclosed courtyard, which is sheltered from the elements by the pavilions it sits between, along with a series of stacked timber shutters to the west, which pivot to protect the space from the prevailing winds. 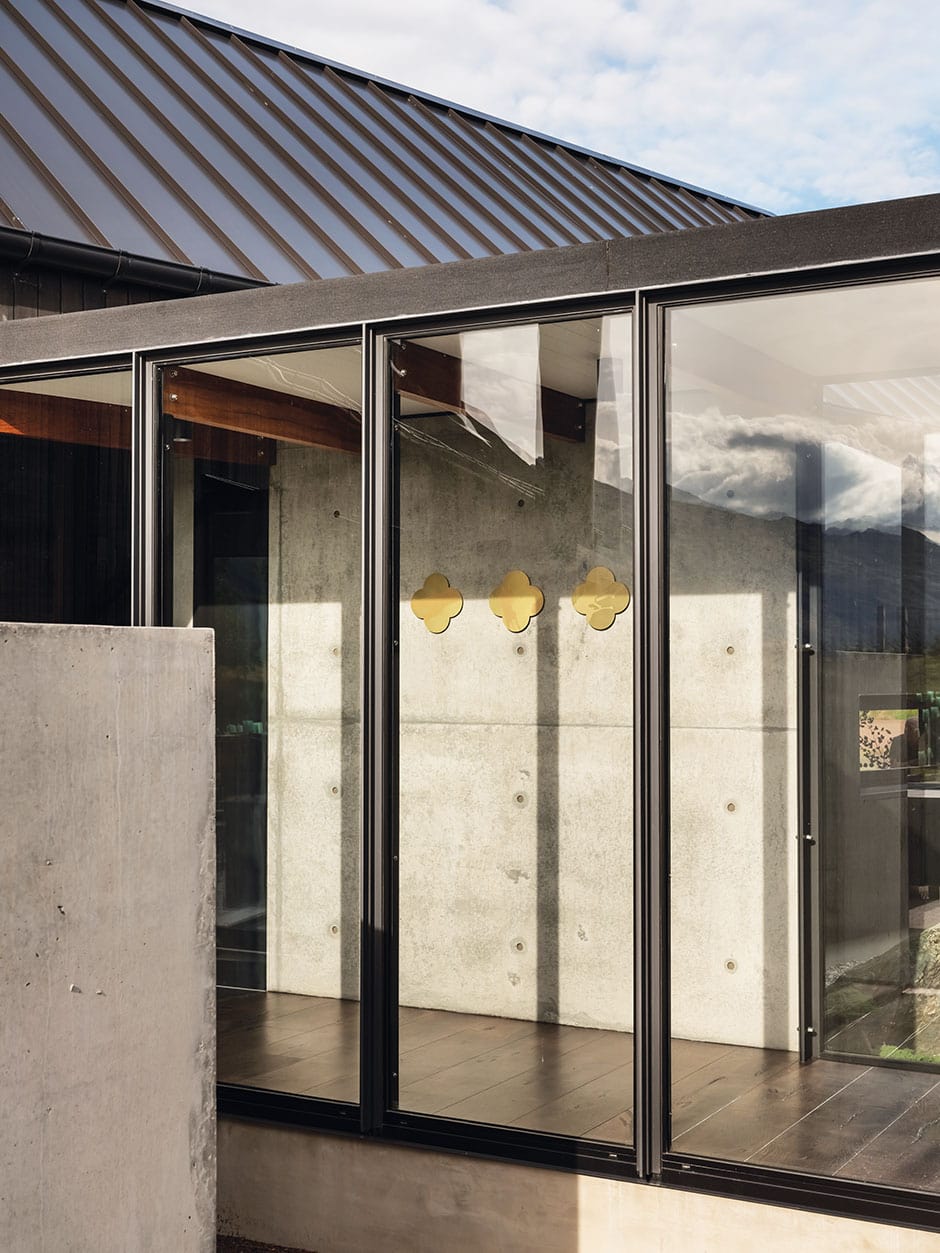 “This outdoor area is the main entertaining space,” says Andrew. “You’ve got a nice big outdoor fire that’s back-to-back with the inside fire, and when you open up the screens to engage with the landscape, it’s a pretty amazing setting, but it can be shut down to be more intimate too.” 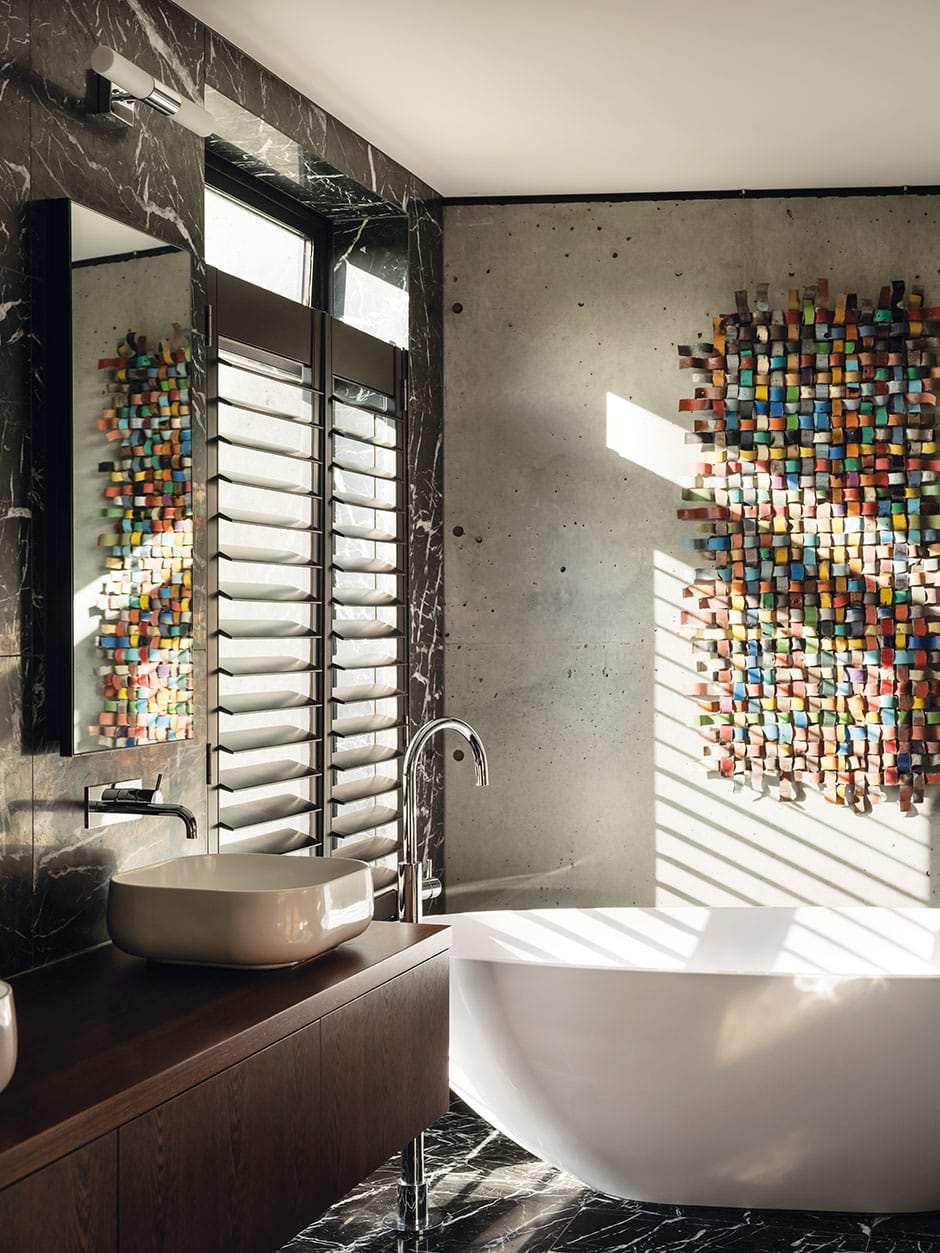 Rounding out the trio, the galvanised steel covering the guest pavilion has the most utilitarian appeal of all. The matte grey cladding is punctuated with ribbed detailing, and sharp insertions surrounding silver anodised picture windows further emphasise the play on light and shadow. 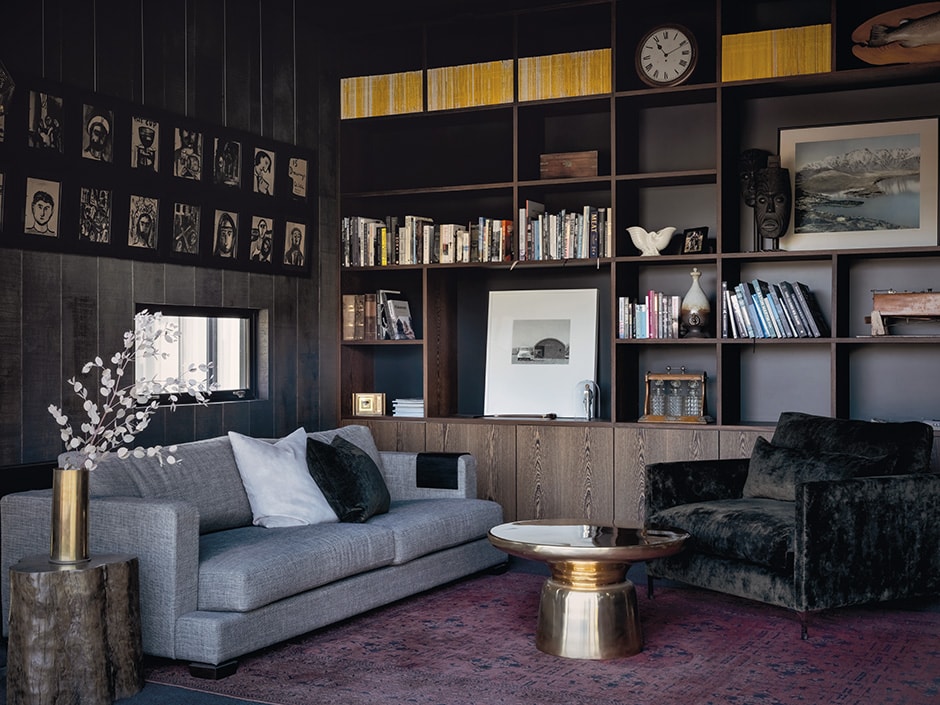 “They work in a couple of ways: with the modulation on the main form, as it’s quite a solid structure, and to create an ‘eyebrow’ to help with sunshade for the interiors as well,” says Andrew. “The way they tie in with the ribs has all been worked out to get the sharp shadows. The interplay of light is a really special way to amp up the mood — and almost highlight the solidity, in a way.

“Having a house that you can shut down — turning parts on, turning parts off to respond to your needs —has been a real success here,” he continues. Functioning together and apart, with the ability to host two or even 20 family members and friends, this is a rural idyll that’s strongly evocative of days gone by, yet sitting firmly in the present.