Coconuts are an incredibly versatile fruit, and there are many types worldwide. Keep reading to find out everything there is to know about coconut tree varieties you can . 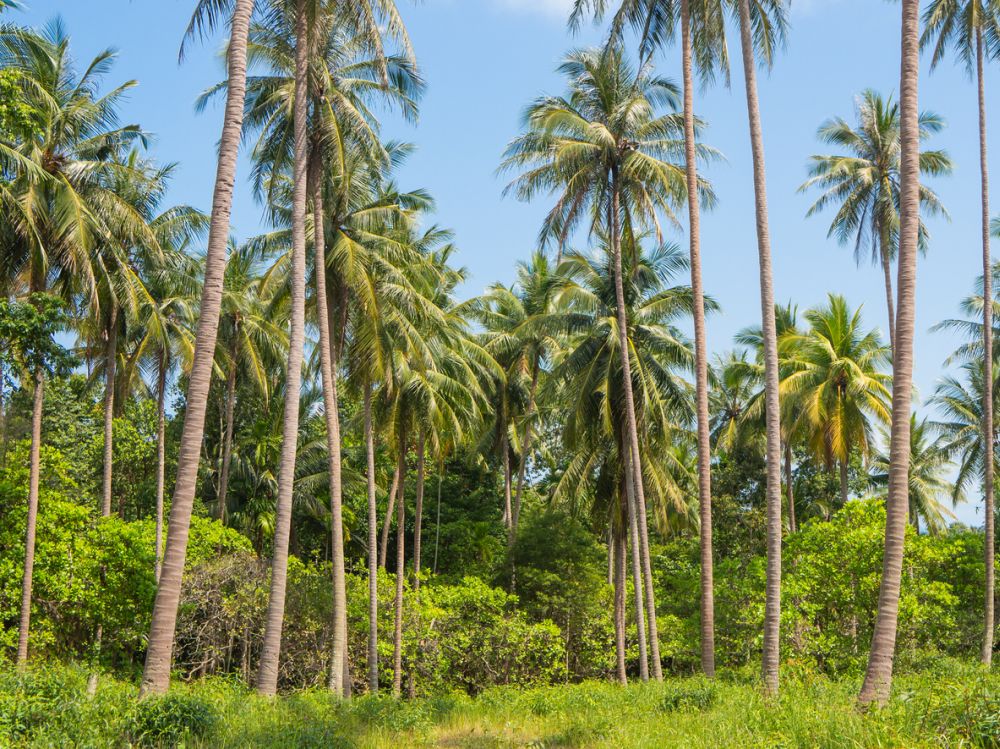 With coconuts, there’s always madness to their method. They might look the same when they’re ripe, but the trees that bear these fruits are anything but similar.

Some are long, slender, and elegant while others are short, squat, and overarching. Even the maturity time is different from one coconut variety to the next.

Some varieties will keep bearing fruits year-round, giving you a seemingly endless supply of coconut water, , and .

If we had to sum up the coconut tree in one sentence we’d say it’s the tree that keeps giving.

So if you live in the right microclimate and have some time on your hands, why not give the coconut tree a try?

We know what you’re going to ask: which variety should I plant? The tall one or the dwarf one? The one that matures early or the other that keeps producing year-round?

The answer comes down to your personal preferences. So take a look at the following coconut tree varieties and choose the one that suits you best.

If you have limited space and want your fruits easy to reach, choose a dwarf coconut variety.

The tree averages 16 feet tall and rarely goes up to 30 feet. So you won’t need to climb the tree to get your hands on the water coconuts. The overhanging fruits are not that high up, and you can cut them with loppers.

On the plus side, the tree starts bearing fruits in the second year of its life. And most dwarf coconut varieties have better tasting and fleshier fruits than their tall counterparts.

So if you’re looking to consume the fruits, the dwarf varieties are the right candidates for your garden.

Now, let’s see some options when it comes to dwarf coconut tree varieties. 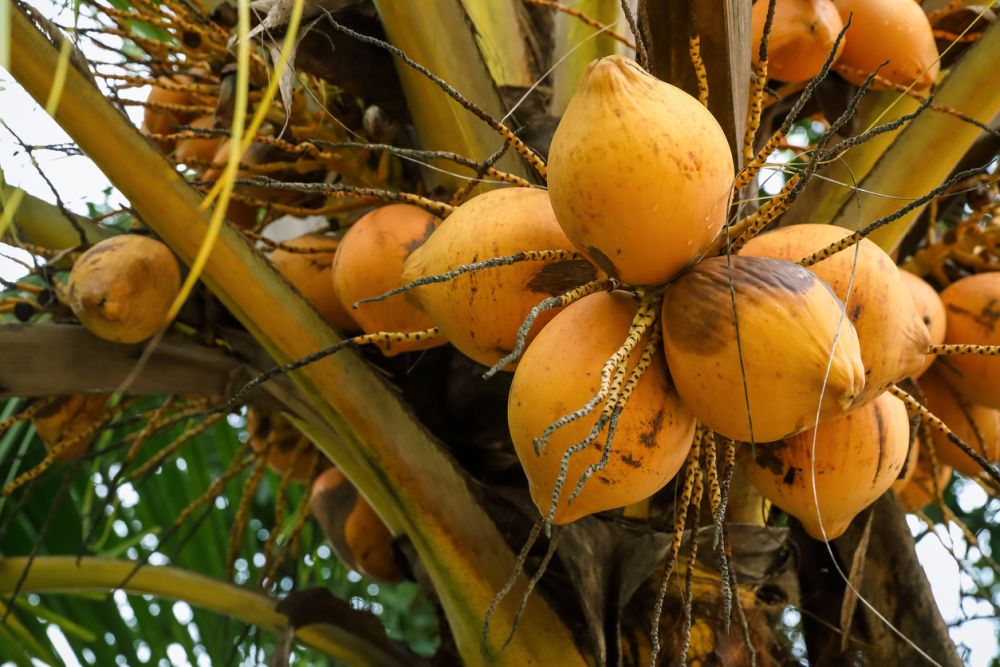 The Chowghat Orange Dwarf Coconut is a dwarf tree whose coconuts turn orange when ripe. It averages 16 feet tall, prefers well-draining soil, and thrives in the full sun.

It’s a new cultivar that first made an appearance in 1991. Compared to other coconut tree varieties, this one has a good tolerance for drought and doesn’t need too much watering or consistent moisture.

It takes 3 to 4 years for the first flowers and coconuts to emerge, which are round, orange, and a bit smaller than on tall coconut trees.

Plus, the water coconuts are sweeter out of the fruit, and the ripe ones have more flesh on them than larger coconuts. All in all, it’s a decent variety to grow in your garden.

The Chowghat Orange Dwarf Coconut is self-pollinating, so you won’t have to in the garden.

It yields up to 65 coconuts every year. But you must protect it from strong winds since its root system is too weak to keep it anchored.

If you have visited Florida, chances are you have seen plenty of Fiji Dwarf Coconut trees.

It , including the yellowing disease – the one that decimated the coconut trees in the Americas, single-handedly reducing the population by about 6 million trees.

The Fiji Dwarf was the answer to the yellowing disease. Thanks to this hybrid, the coconut tree flourished again in Jamaica and the Caribbeans.

It grows well in zones 10 and 11 and prefers full sun to partial shade. It has a high tolerance for different types of soil and doesn’t need protection against strong winds.

The tree averages 25 feet tall but starts producing fruits long before it reaches its full height. So you can harvest the coconuts by hand for a few years without a ladder.

Although it has a short lifespan (40 to 50 years), the tree doesn’t stop growing. It averages 1 foot a year, which explains its exceptional height by dwarf coconut trees standards.

You can grow the Fiji Dwarf for ornamental purposes only since the tree has a lush and dense canopy, thanks to the short and broad leaflets.

The Macapuno (Kopyor) Coconut is not an ordinary coconut tree. It’s a mutation that produces a fruit chock full of soft flesh and no trace of water.

The flesh doesn’t harden as is the case with other mature coconut fruits. It maintains its viscose texture and sweet taste long after it has ripened. Think of it as a coconut full of jelly – it doesn’t get tastier than that.

A native of Asia, the Macapuno Coconut is quite rare. At one point, it was considered one of the most expensive coconuts due to the delicious taste of the flesh and high concentration of sugar. And you can use the ripe fruits to make candies, cakes, and ice cream.

The average tree grows to about 16 feet tall, making it a true dwarf coconut. It thrives in tropical conditions, including full sun, regular moisture, and well-draining soil.

Recent in the Philippines, where it was first discovered in 1931, have led to the proliferation of these trees. The Macapuno coconut is less of a rarity these days as it populates whole farms in Luzon. 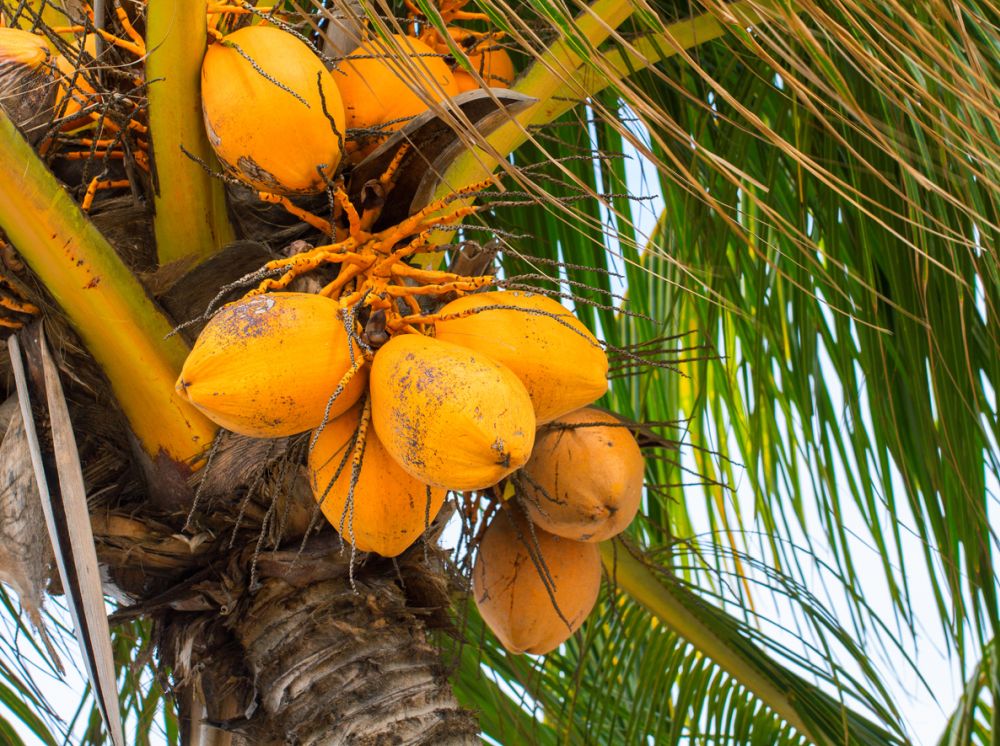 The Malayan Dwarf Coconut is a cultivar resulted by human interference.

The tree appeared in the early 19th century in Southeast Asia and has since spread across the tropics, from Thailand and Brazil to Fiji and Florida.

Despite its name and classification, this hybrid grows up to 60 feet. However, it stays well under 30 feet in normal conditions.

Its spring-blooming white flowers are a distinct feature. They’re tiny, easy to miss, and add to the ornamental value of this lush tree.

Meanwhile, the fruits are oval and large with different colors, depending on the cultivar. In fact, the three main cultivars of this dwarf variety are named after the color of the ripe fruit: green, yellow, and golden bronze.

It’s easy to grow the Malayan Dwarf Coconut in just about any soil, as long as you live in zones 10 or 11 – just plant it in sandy soil and watch it grow quickly.

Besides, it doesn’t make a fuss about watering or feeding. And you can harvest the first round of coconuts after 3 years. 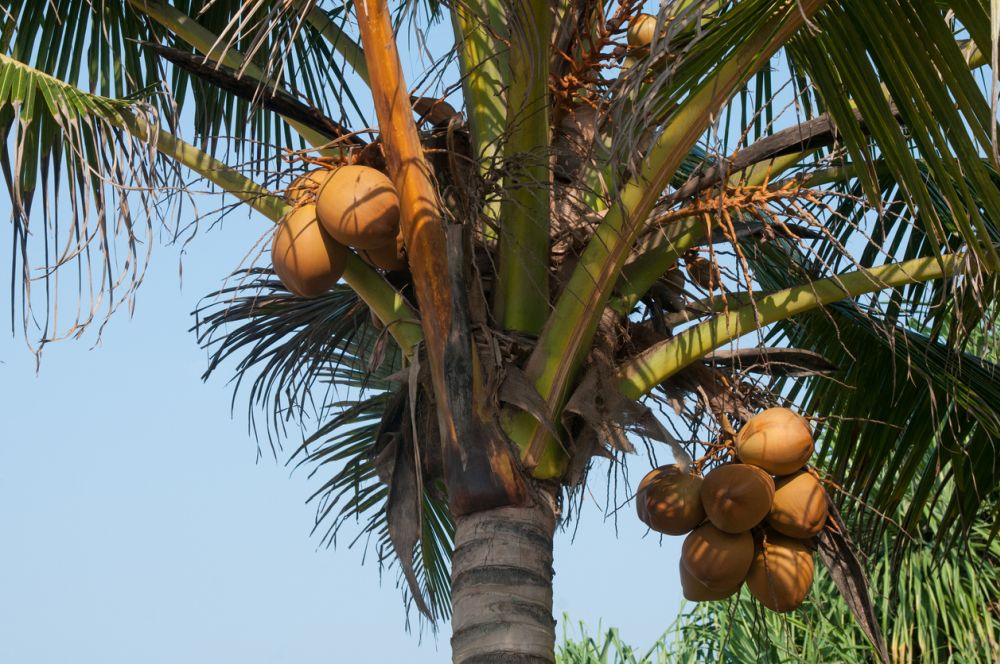 There’s nothing exceptional about the King Coconut – it’s the impression you get from looking at the tree.

It averages 30 feet tall, which is taller than the standard for a dwarf coconut tree but hardly qualifies it for that title.

Even the orange color of the ripe coconuts is not unusual, since the Chowghat coconut tree variety also has orange fruits.

But once you taste this water coconut, you’ll understand why it was named King – it has exceptionally sweet and highly nutritious water.

So much so that it’s hardly allowed to reach maturity in its native Sri Lanka – it’s consumed daily as a healthy snack.

However, the King Coconut has a cultivar that produces green fruits, which are not as sweet as the orange ones. But when they mature, they’re just as tasty and full of oils as any other coconut variety.

You can grow the King Coconut in zones 10 and 11, as long as you have enough space to accommodate its impressive height.

It requires sandy, rich, and well-draining soil. So mix in organic materials and aged manure with perlite to ensure the ideal soil

The average tall coconut tree grows to anything between 80 and 90 feet, and it spends the first 8 years developing its sparse canopy.

By the time your first harvest is ripe, you’ll need a tall ladder or a skilled climber to reach the coconuts on top.

On the plus side, these coconuy tree varieties are more tolerant to different growing conditions, including temperature fluctuations and strong wind.

When the Panama Tall stops growing, it means that it reached 90 feet and developed its umbrella-like canopy.

It’s a beautiful and graceful tree that stands out in any background. But you need a large yard or orchard to plant such a giant tree.

The Panama Tall has some striking resemblance to the Jamaica Tall, but you can tell them apart by the canopy’s shape: dome for Panama and rounded for Jamaica.

Since it withstands cool temperatures, you can grow the Panama Tall in zones 9 to 11. It tolerates the occasional drought and doesn’t get damaged by strong winds, thanks to its robust root system.

And as you might expect, the tree needs full sun. It would be otherwise hard to provide any form of shade due to its impressive height.

The fruits are the least distinguishing feature: usually yellow when ripe but have an average taste and flesh-to-skin ratio.

Furthermore, it’s a bit tricky to harvest the coconuts whether they’re young or ripe, since the smooth trunk makes it challenging for the average person to climb 90 feet to get to the fruits. 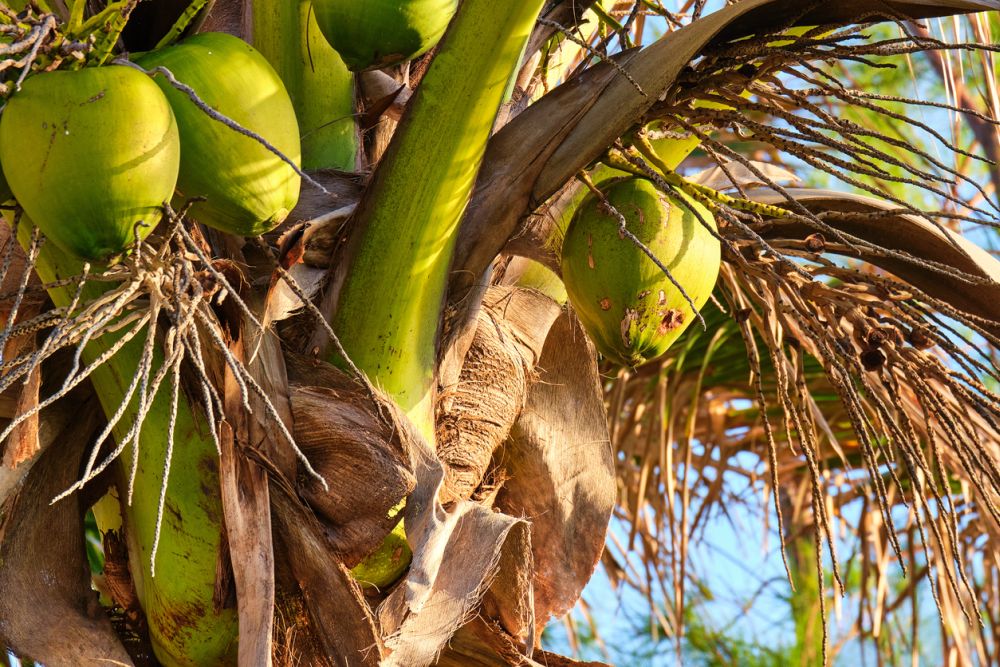 A crossbreed of Panama Tall and Malayan Dwarf, the Maypan Coconut is a hybrid initially created in 1960, preceding the yellowing disease disaster that almost wiped out the coconut tree species.

But thanks to its resistance to this disease and others, it was one of the few cultivars chosen to bring up the numbers of coconut trees worldwide.

It grows over 60 feet tall in zones 10 and 11, prefers sandy and well-draining soil, and doesn’t get affected by strong winds – a trait inherited from the Panama Tall.

The Maypan Coconut is quite popular in Florida and the Caribbeans since it’s easy to grow and has ornamental value, thanks to its medium size.

The annual yield is meager compared to any dwarf coconut variety. On top of that, it requires plenty of space to thrive, making the Maypan Coconut more suitable for public parks and large estates than the average garden.

Which variety of coconut tree is best?

Some of the most popular varieties include the Indian Coconut, Dwarf Coconut, and Tall Coconut.

Which is the hybrid variety of coconut tree?

The hybrid variety of coconut tree is the Tall Coconut.

What are the benefits of planting a coconut tree?

Coconut trees provide a shade, produce coconuts, and improve the appearance of your yard or garden.

To review, there are many coconut tree varieties suitable for planting in a garden or backyard, and all have the potential to provide a bounty of coconuts.

Whether you’re looking for a tall or short tree, an ornamental or productive variety, there is sure to be a coconut tree that fits. With a little bit of patience and care, you can soon enjoy fresh coconuts from your very own tree!