I’m hopeful. As we set sail from Puerto Pirámides our guide Sebastian confidently assures us that we have a ‘100% chance’ of seeing Southern Right Whales today. He’s not wrong. Almost as soon as we get out into the deeper water a mother and baby are spotted from the team’s lookout point.

Whale watching season is in full swing in Puerto Madryn in Patagonia, Argentina, and I’ve been kindly invited to experience this natural wonder by who specialize in tours around Argentina and Chile.

I arrive in Puerto Madryn on an Argentine bank holiday. The sun is shining and the beach is packed. There are colorful parasols everywhere, children squealing as they paddle in the waves of the Atlantic and teenagers competitively playing football, using flip flops dug into the sand as goal posts. Everyone seems to be in a good mood. 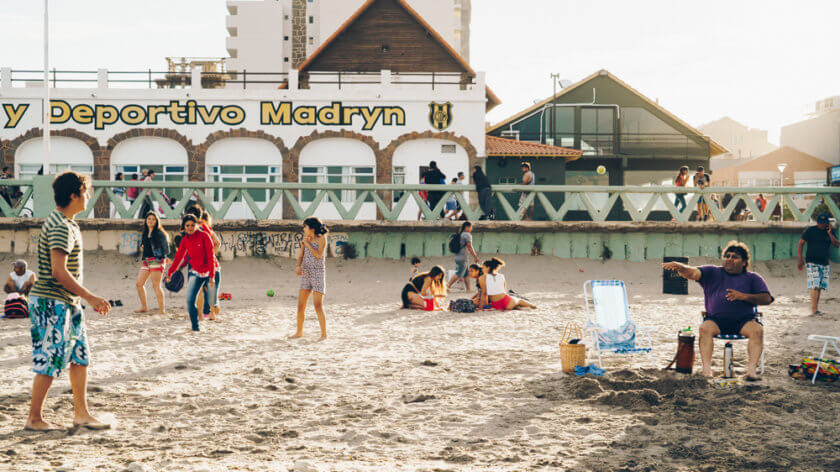 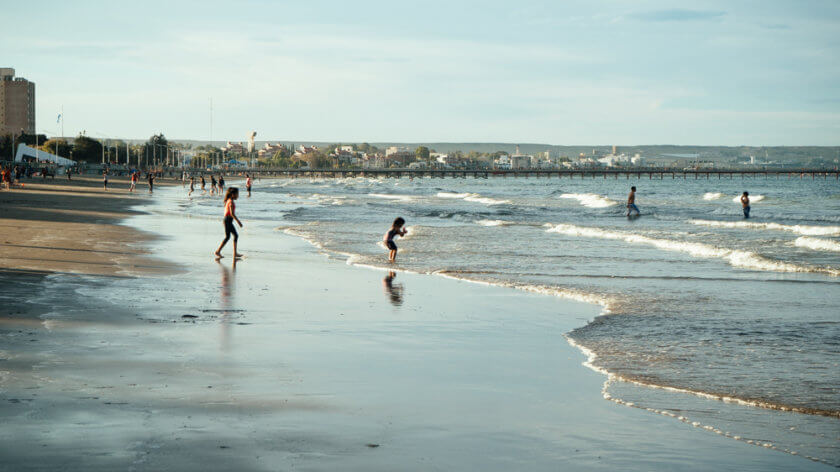 Aside from the beach front in Puerto Madryn, there’s not a huge amount to do in the city itself. But it’s the base for exploration to Península Valdés, a UNESCO world heritage site that is home to a myriad of wildlife, and to Punta Tombo, where there is an enormous penguin colony, both of which I’m visiting on my trip.

On my first full day, I set out at 8am to do a tour of the mushroom shaped Península Valdés, with a group of 18 others. The peninsula is a protected area with thousands of species of animals. After a couple of hours in the minibus we arrive at Puerto Pirámides, get kitted out with with life jackets, board a boat, and are towed into the water by a tractor to go whale watching.

After feeding for several months, Southern Right Whales migrate to the calm and warm waters waters of Península Valdés, to give birth and raise their calves. Although they were once on the verge of extinction, there are reports of record numbers in the region this year.

It isn’t long before the captain notices the whales coming towards us. They turn off the engine and direct us to move to 3pm on the boat. It’s a relief they use points on a clock to alert us to locations, I can imagine port and starboard would lead to a lot of confusion among us inexperienced seafarers. 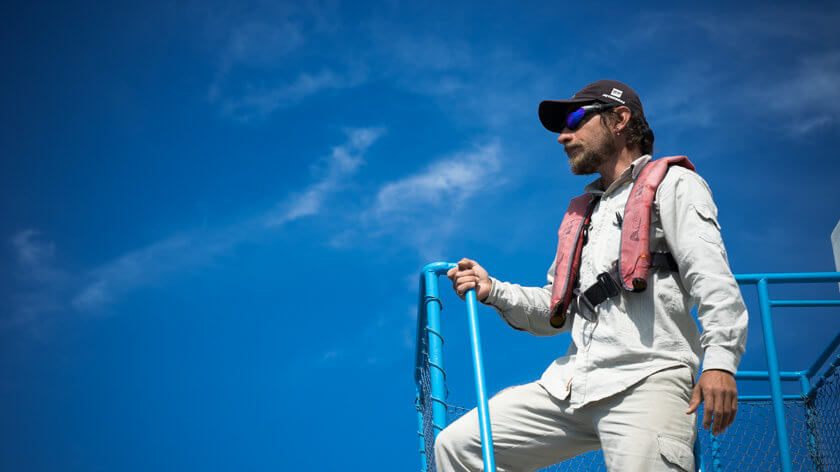 The whales swim over to us. The baby more playful and curious, rolling around on top of the mother and flicking its tail. The mother is calm, floating serenely through the waters. They tentatively come closer and closer, intrigued by the boat. They poke their heads out, gazing at us, before turning away and heading off out into the sea. These enormous, graceful creatures are mesmerizing. 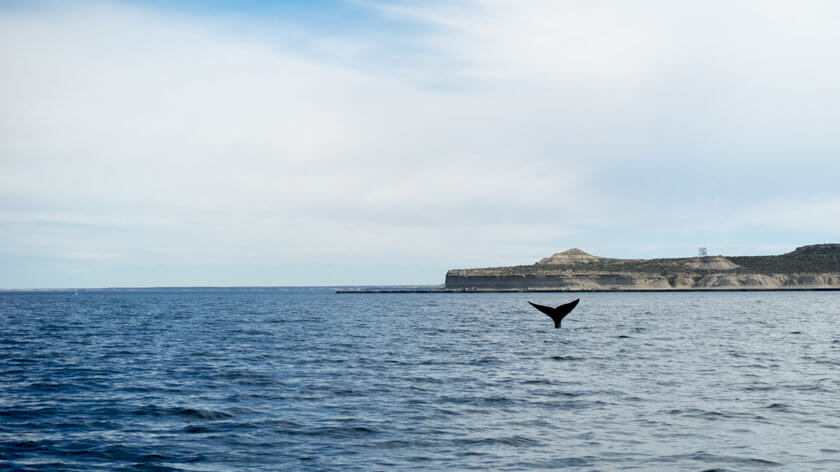 They have the most unusual faces that don’t really look like faces. Each one has a different pattern of white markings called callosities on their head, a combination of rough skin and lice, which are as individual as a fingerprint. Conservationists are able to identify them by taking photos of their faces. 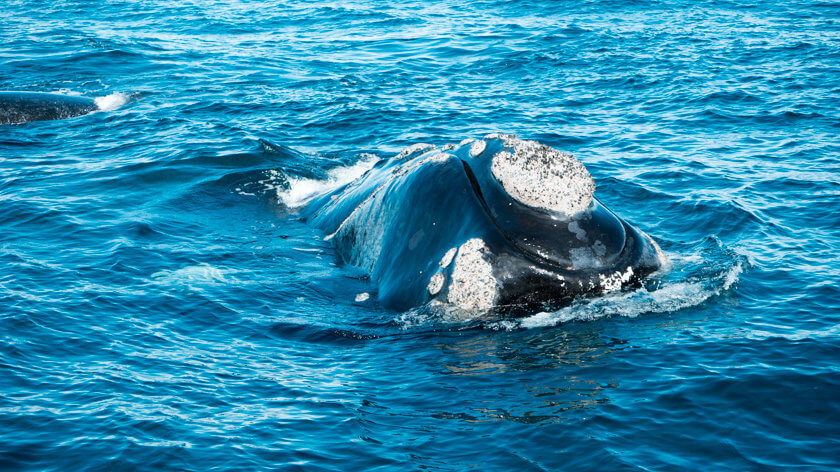 I had, perhaps naively, hoped that the whale might jump out of the water, or even over the top of our boat. But they move languidly, expending as little energy as possible – after stocking up on zooplankton in the Antarctic, the mothers don’t eat when they arrive in the area as they can’t leave the calves.

At our next spot we are surrounded by whales from every angle, although at more of a distance. They are popping up and then slinking back down; making guttural sounds as they spurt water from the blowholes; and gliding beneath the surface. As we go back to shore I can’t help but wish we had longer out at sea.

During the one-hour journey to our  next stop, Caleta Valdes, our driver Charlie slows the minibus several times so that we can take a closer look at the guanacos (they’re a bit like llamas), burrowing owls and maras (they look like a hybrid of a rabbit and a dog) that pop up. When we arrive we have a quick choripan (Argentine sausage bap) for lunch and then have an hour or so to explore the coastline from here.

The Patagonian landscape is as striking as ever – beautiful blues, birds swooping close overhead and nature as far as the eye can see. The tide is low and I see the sea elephants basking on the edge of the sea. We’re on the cliff above and at quite a distance – from here they actually look a bit like slugs, especially with the trails that they leave in the sand. As I walk along, I notice a tarnished anchor out in the sea. My initial assumption was that it had been placed there to add a bit of intrigue to the view, but I later learn that it’s all that remains of a boat named Lolita that sank in 1905. 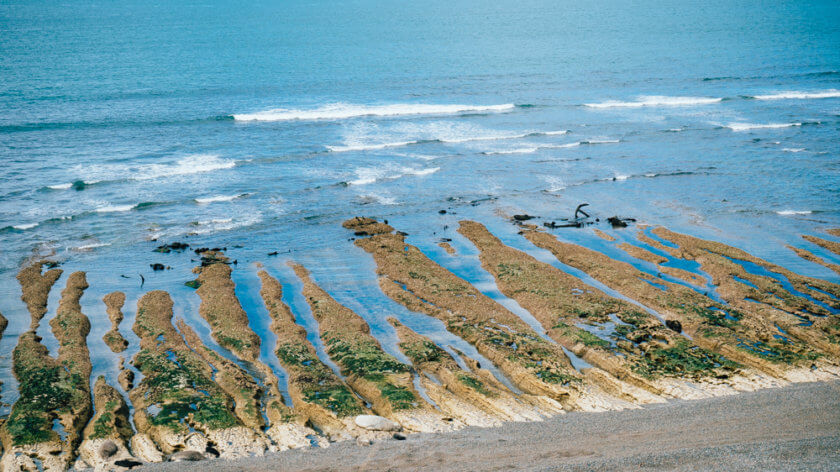 At around 3pm we head back to Puerto Madryn, arriving at 5.30pm. It’s been a lovely day; whale watching was definitely the highlight. We spent a lot of time traveling, which was tiring, so I’m definitely ready for a good night sleep in the Dazzler Hotel. My room’s clean and comfy, with crisp white sheets and an enormous bed. The huge windows look straight out onto the sea. 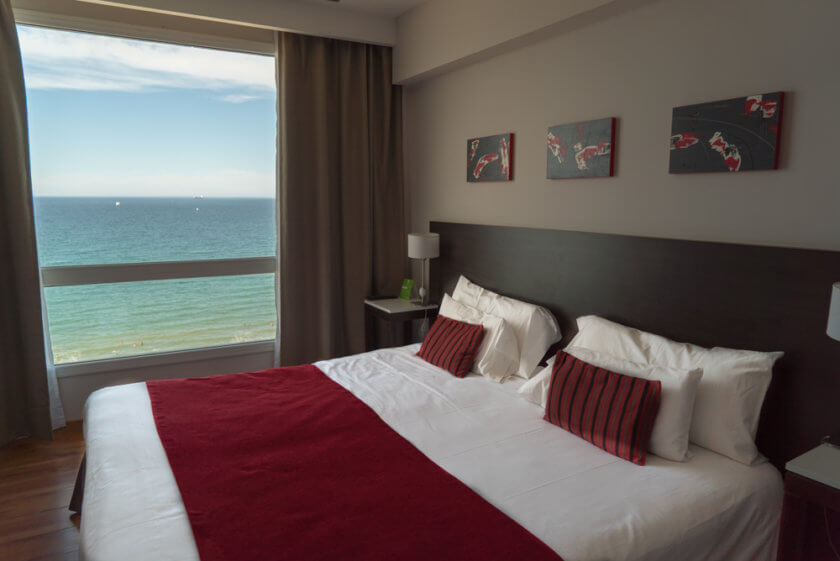 Another 8am start and a group of five of us head towards Punta Tombo for some penguin watching. I chat to the guide, German, about how I had wished we could have gotten closer to the sea elephants yesterday and he kindly suggests doing a quick detour to Isla Escondida, a place en route where we might be able to spot some.

We turn onto a dirt road that German tells me is only used by ‘farmers, fisherman and people who steal sheep’. After a reasonably long drive, the aquamarine sea appears on the horizon and I can see the familiar sluggish shape. There’s about 40 sea elephants on the beach – a macho male is in the middle, surrounded by his women and their cubs. Occasionally the male has to warn away the other competitors who are lurking around the edges and in the sea. 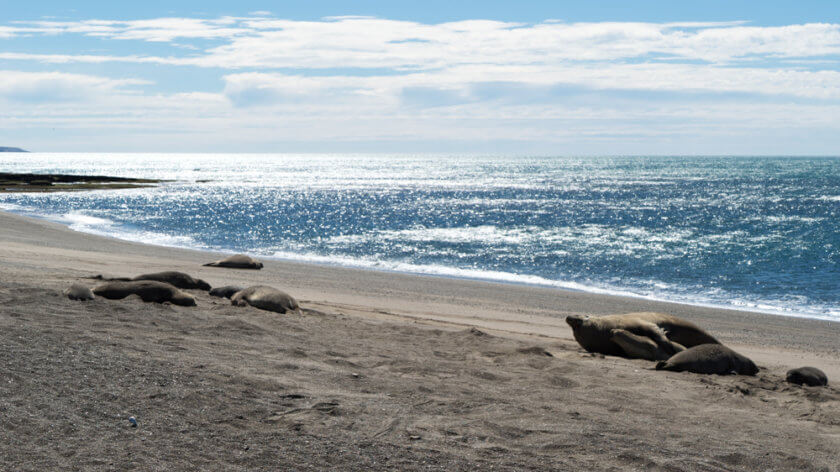 They all lie lazily in the sun, cooling themselves by flicking sand over their bodies and turning 90 degrees every so often. Each time they rotate they sink into their blubber as if it were a viscous liquid. It’s just us and the sea elephants on the beach. Bliss. We sit and drink mate, an argentine herbal infusion, in silence. It’s peaceful. These magnificent animals are truly spectacular.

We continue our journey on to Punta Tomba, a reserve with about 500,000 penguins. We’re told by German that we have to give the penguins right of way if they try to cross the path and we mustn’t try to hug them, even if they look sad. There are penguins everywhere; they sit facing the sun with a smug look on their faces, lie on the eggs they are incubating and waddle along towards the sea to go and find some food. They are unbelievably cute. The walk through the reserve is about 1km and we arrive at the lookout point, where we see penguins bobbing around in the aquamarine water. It’s joyful to watch them splash around and float on the waves. 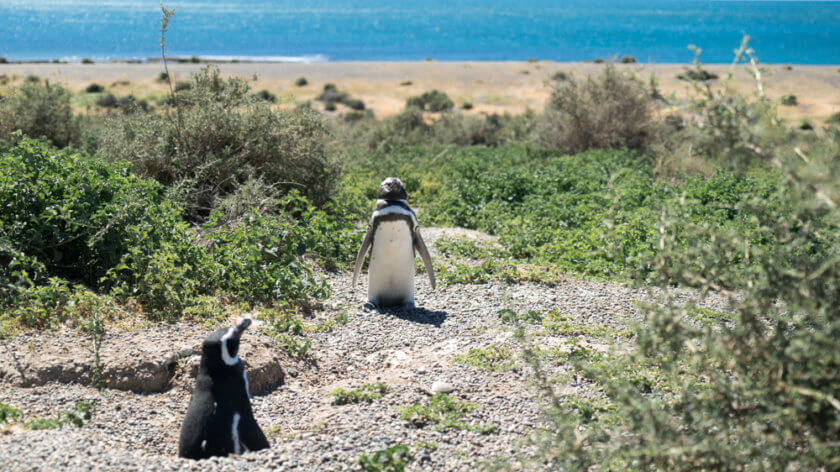 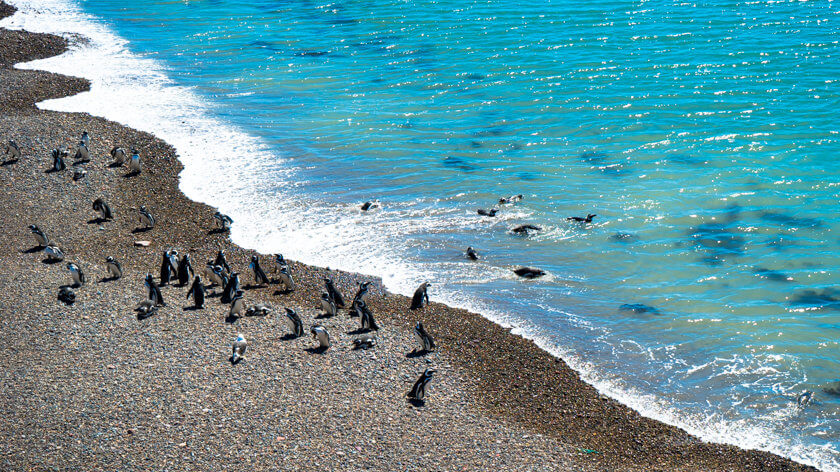 On the journey back home we stop off at the Palaeontology museum. I’m tired and not sure if seeing bones is going to be as exciting as the creatures we’ve seen today but it’s actually quite interesting. I love the replicas of dinosaurs from the Mesozoic Era and the displays showing how big their teeth were – some are as large as my hand! 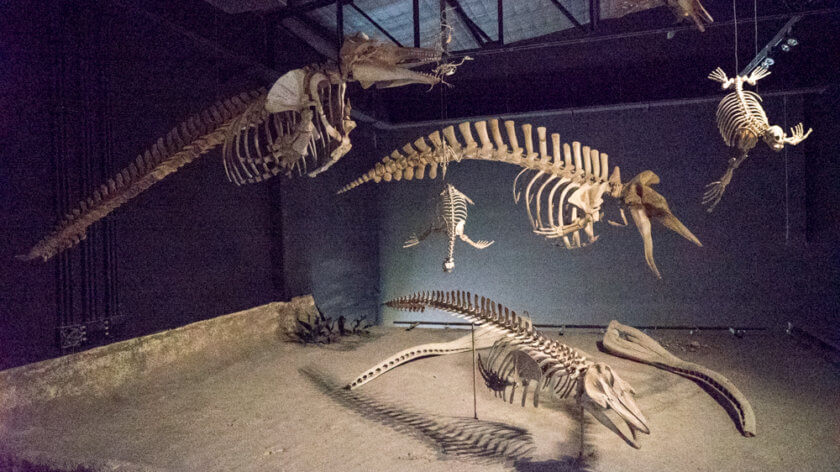 I sleep most of the way back to Puerto Madryn. It’s been a fantastic few days – the extent and variation of wildlife here is astounding. It’s not just marine life.  As well as whales, penguins and sea elephants, I also saw flamingos, snakes, lizards, owls, sheep, horses and even a bat! Puerto Madryn is a must for nature lovers!

Many thanks to for this great adventure. All views my own.