I will never forget my first trip abroad when I was 16 – I went to Paris with my parents. It was the first foreign country I visited and I might as well have gone to a different planet.

My love for travelling started at a very young age and I began to go on solo trips when I was still working in a bank. The cultures, people and experiences I made abroad made me really happy and I knew I wanted to change and do something related to travel. I hated working in the financial sector and used to wake up in the morning looking for excuses not to go to work. I loved to write and started making a steady income on the side.

I always wanted to quit but unfortunately not a lot of people supported me, and I’ll have to say many people back home just don’t approve of this kind of choice. I don’t take it personally anymore, it is just different than what they are used to. I did however go forwards and decided to quit my job at the bank to follow my dream of travelling the world. Writing would be my source of income, so I launched my blog .

Reactions from family and friends

Even though my parents are very supportive now, they didn’t like the idea in the beginning. After all, I am Egyptian and our society considers what I’m doing as a ‘’taboo’’ – whether we like to admit it or not. I will always remember some of the horrible comments I got when an article about me came out in Egypt, like ‘how is her dad letting her do this and travel alone? she probably isn’t raised properly’, or ‘she is just travelling to meet European guys’, and a lot worse. On the other hand, I also got and still get positive messages from many amazing people, especially girls who are proud of me and want to do what I’m doing. This also gave me the chance to get to know other amazing Arab travellers, who have been facing the same issues and backlash.

There were also worries that I’m never going to find someone and get married because of all the travelling or that it is going to be too late when I decided to settle down. It’s crazy that I still get comments like these from close friends of mine, people who I thought would have been more open minded than this.

I comforted my parents by giving them all the info about my itinerary, hotel bookings, and air tickets. The more I travelled, the more comfortable they became. I was determined to follow my dreams, and this is exactly what I did. They still worry sometimes, but it’s important to understand that they are your parents after all and what I’m doing is a bit extraordinary from our culture.

My experience so far

When I started travelling, there were many solo female travellers, but most of them were Westerners. I haven’t found many long-term female Arab travellers even though there are some, and more Arab girls are becoming braver and getting the courage to travel alone. I’m hoping for this to develop even more.

I have made so many friends during my travels. When travelling, people are usually more open and want to make friends but I would be lying if I said I don’t experience some racism here and there. But I tend to not take this personally because you can’t really change the way people think or the way they were raised so I just let it go. Overall, the world isn’t as scary as it seems. I remember in Japan, I started a conversation with some locals on the train, and they ended up inviting me for lunch. Not only did this help me in making new friends, but it also taught me new things about the Japanese culture. They also recommended excellent off the track places that I would have probably not figured out on my own.

The hardest part about travelling in the beginning was the planning process but the more I travelled, the easier it became. I’ve also learnt not to be so hard on myself on the road to avoid getting burnout, and to make the most of my trip because I’ll only get one chance to travel the world. As long as you take your precautions and safety measures, there is absolutely nothing to worry out.

My advice for all Arab female travellers out there is to follow your dreams and not be limited by culture. There is absolutely nothing wrong with travelling and you’re not hurting anyone by doing it. Not only will travelling help you in exploring the world, but it will also teach you so much about yourself and others.

Solo travelling as a woman can be daunting, but it doesn’t have to be, especially if you take your precautions and stay aware of your surroundings. Sure, there are some moments where you can feel nervous or lost, but this is completely natural in the life of travellers, and you do learn a lot from it.

This is a guest post by Omniya Fareed Shafik. 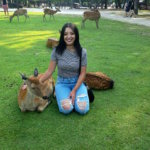 Omniya is an egyptian traveller who’s been exploring the world for the past couple of years. Other than exploring the most beautiful places in the world, she loves reading, cooking, and learning about different cultures. You can follow her on , Instagram , and her .