What I learned and experienced with the people banned by Trump


As I am submitting this post to Travelettes, I am sitting at an airport, waiting for my flight. Airports seem to be all that people talk about at the moment, and I really don’t think it should be otherwise. Though Travelettes is not about politics, it is about travel. And so is this issue. More than travel actually, it is about lives. Human lives. And prejudice. And injustice. And every time I think of it, it makes me sick to my stomach. There, I said it. 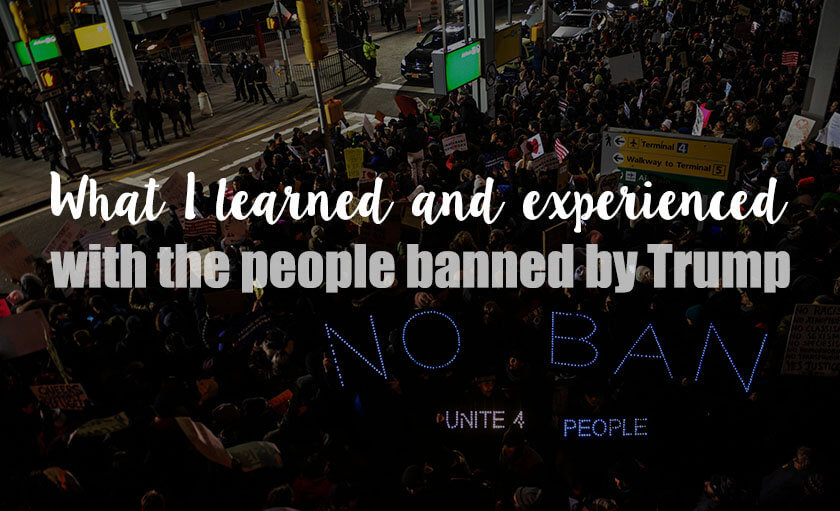 But when I first heard about this immigration ban, another, quite unexpected thought, came to my mind. I thought… “How could he not want these people there? He doesn’t know what he is missing, what he is depriving his country of.” Because the truth is, over the past few years, a lot of the people that have made my life so meaningful and have taught me some great lessons were exactly the ones targeted by this terrible ban.

And though a simple blog post wouldn’t do them justice, I still desperately wanted to write this. To let my angry feelings be replaced by all the beautiful memories and important stories. And to let the prejudice of the world by replaced by a tribute to the greatness, courage and generosity of all these people, who had crossed my path. Just for a few minutes. Because I needed it.

On Iran… and hospitality

Ironically enough, I started being a contributor for Travelettes after I submitted my very first post about Iran. My one month stay in this country, back in 2015, is still one of my best memories up to this day. When I think of Iranians, hospitality is the first word that comes to my mind. Never before in my life had I met so many people willing to host me, know me, talk to me, or share about their life and country. They made me fall in love with their culture, their food, their poetry, their amazing architecture and fascinating history. The people who invited me into their homes were probably the most generous individuals I had ever met and all this kindness – that seemed almost suspicious to me at first – is the main reason why I loved visiting this country so much. I wish everybody could go there and just see. Iran is so much more than its government, its laws or, for that matter, its Islamic Revolution. It is much more complex, intriguing and diverse than one could ever imagine. And its people made it one of the countries I love the most in the world. 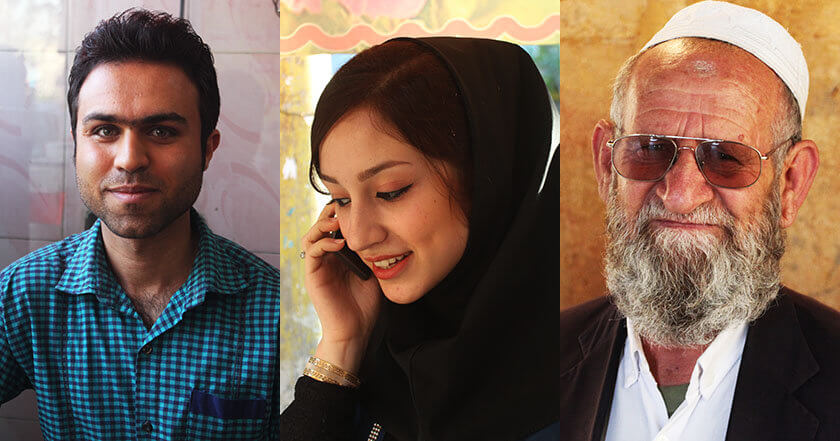 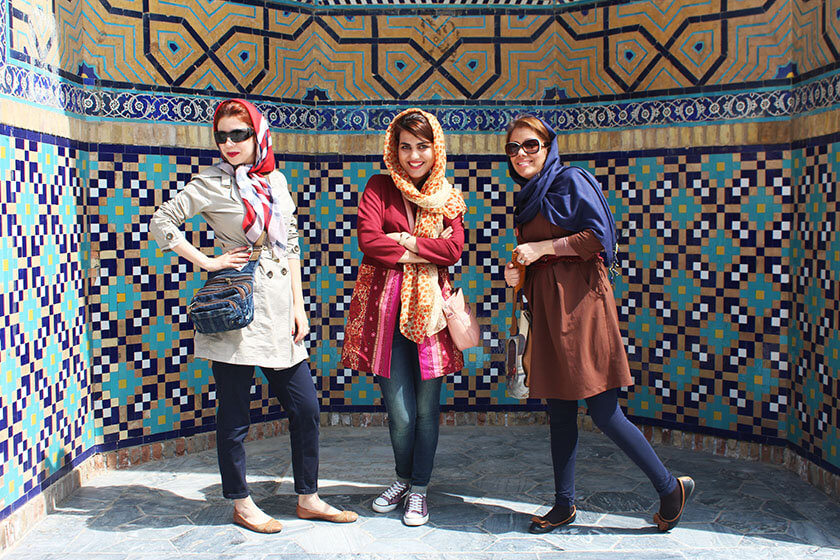 On Iraq… and resilience

I have been working, living and traveling in the Middle-East for a while now, but the first time I set foot in Iraq was actually in 2016. I was sent there for my work, to document the stories of what we call, in humanitarian jargon, “IDPs”, standing for “Internally Displaced People”. There are more than three million in Iraq, at the moment. More than three million people have had to flee their homes because of the many conflicts that have torn the country apart, over the past few decades. I also got to meet with people that had returned home, just to find their house in ruins. Or people that had never really moved, but “just” lost parts of their own body or family members, because of the many wars. Actually, it’s hard to meet someone in Iraq who doesn’t have a story like that. Most of the population has been affected by conflicts in one way or another throughout their lives. 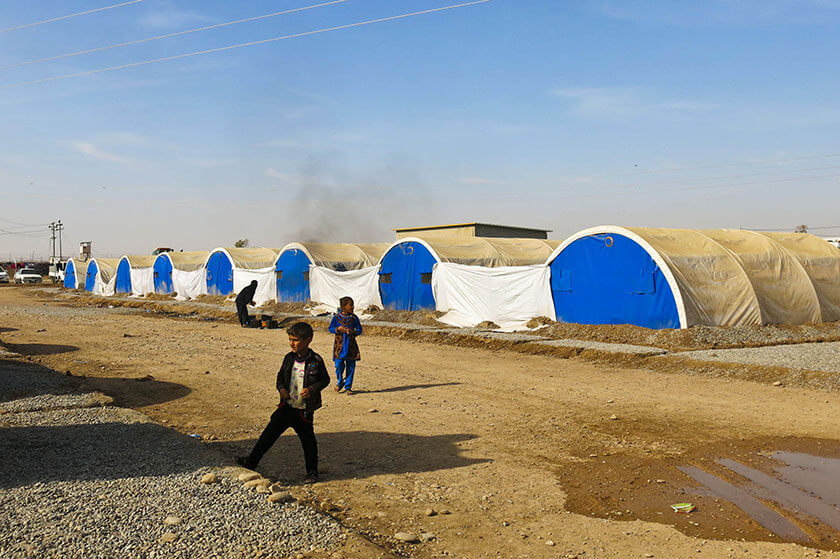 But every time I was interviewing Iraqis, or just sharing a tea with them, I was struck by the same feeling. A feeling of deep respect for such aptitude to resilience. Despite all these traumatic experiences, all the conflicts that they never had asked for, all the fights that are tearing their country apart, Iraqis and Kurds are still standing. I often think that I could not, if I was in their position. I will never forget their smiles, and their willingness to share their experiences with me – a stranger – who entered their home or their tents in a camp one day, wanting to know what had happened to them. 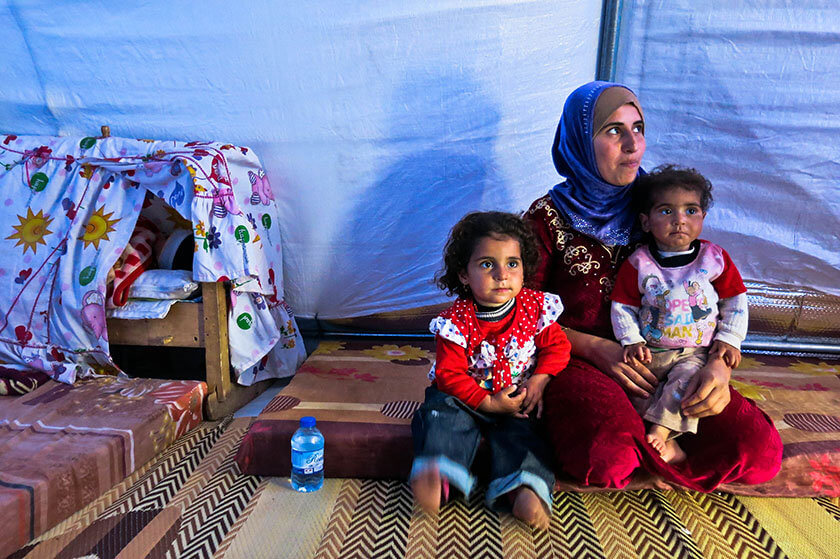 On Syria… and dignity

I have been working with Syrian refugees for over a year now. I have traveled extensively throughout the region to collect their testimonies, photograph their lives, their struggles, their joys, their families… Syrian people have lived through the worst suffering, yet Trump sees them as terrorists. I wish he could just live one day of the life they’ve been living for almost six years. I talked to people who’ve experienced life under siege, who’ve been starved, who’ve been tortured, who’ve been shot, who’ve lost all of what they had. I have interviewed dozens and dozens of victims of bombings, who sometimes saw their closest friends and family members die before their own eyes, lost limbs, all their wealth, their jobs, their homes, their hope and their daily routine. Sometimes all of the above, just in a second. Some people still seem convinced that these Syrian victims were actually taking part in the conflict, which made them automatically targets. No, the vast majority of them were civilians, and had never carried a weapon. And if you still don’t believe it, get your facts straight. 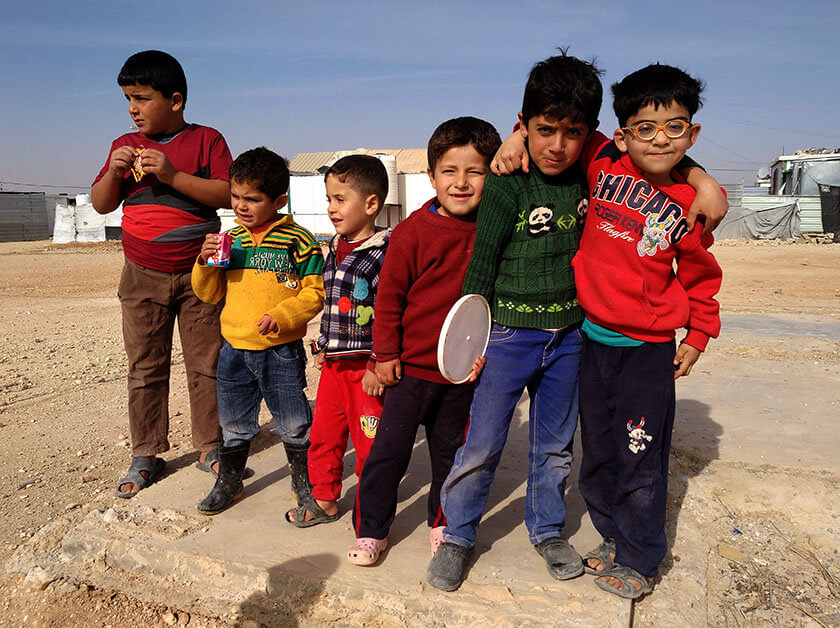 The conflict in Syria has already led half of its population to flee. Almost five million Syrians are now refugees, another 6 million are internally displaced and over 13 million need humanitarian assistance. The situation for Syrians is critical, as they face the worst humanitarian crisis since World War II. Yet this is the people Trump’s executive order on immigration indefinitely bans. I could continue showering you with figures. But this is not the goal of this post. What Syrians have taught me over this past year is overwhelmingly hard to put into words. But if I had to find just one to describe it, it would have to be “dignity”. Syrians reminded me that when you’ve lost everything else, you still have your humanity. They stand proud, and tell you their story. Never have I met one Syrian refugee who wanted my pity. No, they all had this in common: this ability to, despite their living conditions and stories, inspire respect. Dignity is usually defined as “nobility or elevation of character” or “the quality or state of being worthy”. And this is the best way to describe all the Syrians I have met on my journey. 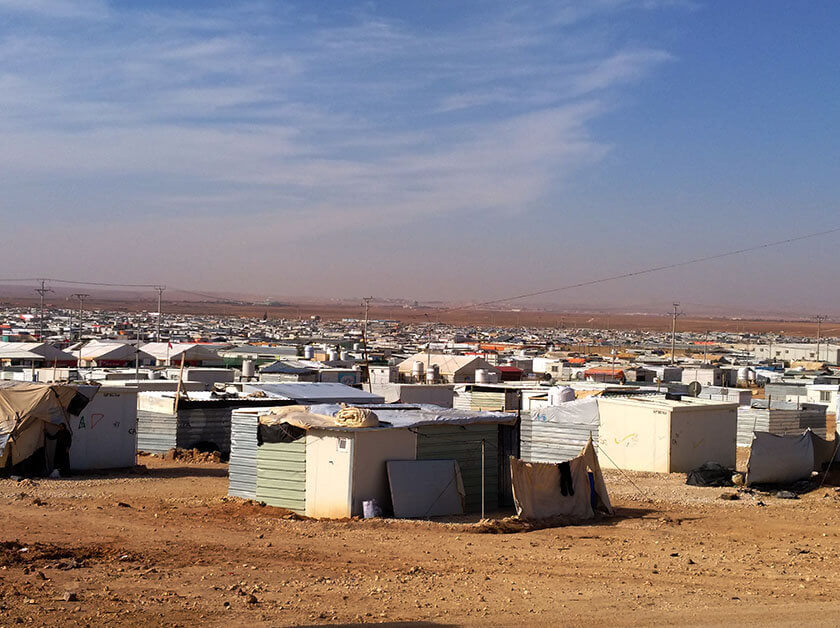 And on Yemen, Somalia, Sudan and Libya…

I have actually never visited any of these four countries. But I could tell you that one of my dearest friends is actually Somali. Or that my mouth is watering every time I think of Yemeni food or coffee, because it is some of the best. I could also tell you about how I fell in love with Sebastiao Salgado’s work thanks to a picture he took in Sudan. Or that one of my favorite comic books of all times is “The Arab of the Future”, by Riad Sattouf, recounting in childhood as a Franco-Syrian blond, funny little kid, in Libya. Yes, I have never set foot in any of these countries. But I have never doubted either the awesomeness of their population. Because, to me, we can learn from every person we come across, every culture we discover, every land we set foot on. I have never seen people from other countries as scary, or as a threat for that matter, more of the opposite. And nobody should ever be defined by their government or the conflicts tearing their country of origin apart. 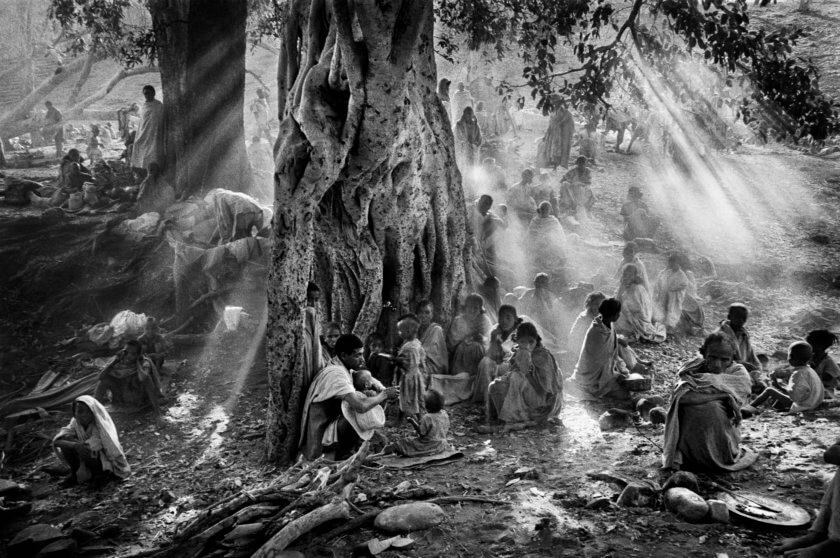 America is a nation that was mostly built by immigrants. By people coming from elsewhere, fleeing wars or just believing strongly in the unalienable right of what was defined, one day, as “The pursuit of Happiness”. Treating immigrants and refugees now as a threat is not only wrong and shocking, it is an insult to the basis on which the nation was founded. Because nobody actually chooses where they are born or which war will destroy their lives and countries.

It is almost time for me to board my plane. I have already flown several times since the beginning of 2017. I do not need to flee any war, I actually do not NEED to go anywhere. I mostly travel for work or leisure. Most of the people targeted by this ban don’t. They travel to America for much more important reasons. They travel with the hope of a better life, they travel with the hope of no more conflicts. They do not travel to reproduce elsewhere what they have suffered from. They want to escape it. They just are humans, like you and me. Mothers, fathers, teenagers, kids. Nobody should ever forget that. And if I am not considered suspicious in all these airports, all these borders I cross… Why should they?

Before I go, I just want to share one last anecdote with you. Because to me, this sums up everything. A few weeks ago, I was in Zaatari camp, back in Jordan. It is one of the biggest refugee camps in the world, one opened for Syrians, back in 2012. There, I met Kamel. This farmer from the southern Syria countryside, had been injured, last year, in a bombing. He was at home when it happened. He will never walk again. Kamel has lost everything. His family, his job, his home, even his mobility. Yet, when I met him, I was struck by the smile on his face. He is one of the most positive people I have ever come across. He is the only refugee to whom I dared to ask a question that could, to some, seem shocking. “Are you happy?”, I said. He looked at me in the eyes, and answered: “Why wouldn’t I be? There is nothing to hate in life, nothing to be mad at. We get to live the life we live, and we have to make the most of it. I am happy today because I met you. And you’re happy too. You came to hear my story, to share this moment with me. Isn’t it beautiful?” 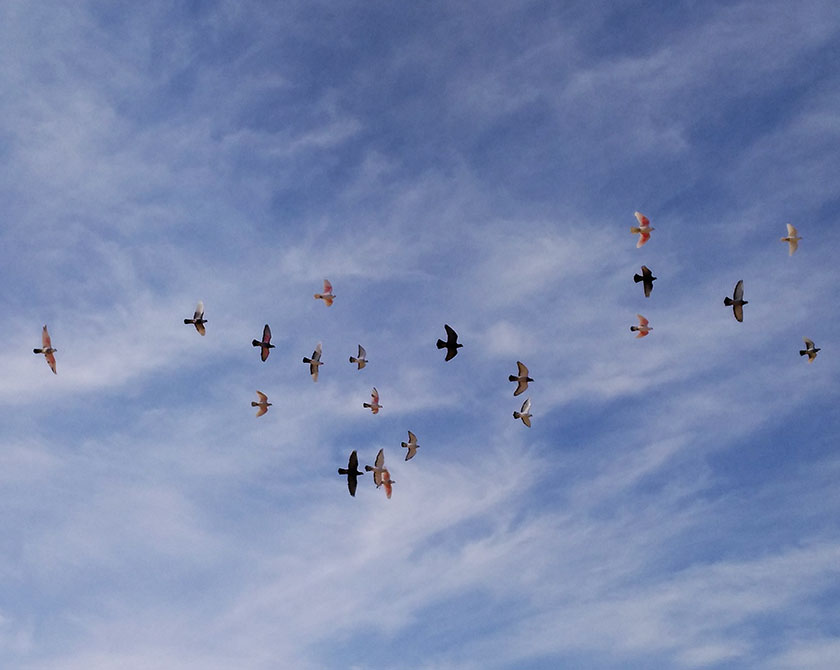 I wish everybody could see things through his eyes. I wish we could care about other people for who they are, not where they’re from or what their religion is. I wish we could see how much everybody has to bring to the table, and even more so when they have been through traumatic events. These people are living proof that we shouldn’t let history repeat itself. Their testimonies need to be heard and they do have the right to happiness, like everybody else. So please, if you wish that too, don’t second guess whether or not you should raise your voice. And even more so as travelers, because we are living witnesses that open-mindedness is the key, not prejudice. And because as Martin Luther King said one day: “Injustice anywhere is a threat to justice everywhere” – let’s never forget it.