For the best part of four years, a car jack held up the kitchen sink at Julie Donaldson and Tim Woods’ place. If you overfilled the bowl, it’d start to sway, sending water trickling down the sides. “The house was very, very original!” says Julie of the century-old Auckland bungalow. “It was pretty bad for a while, but there wasn’t any point putting even $5000 into the tiny kitchen because we knew it’d eventually have to go, so we just had to suck it up.” 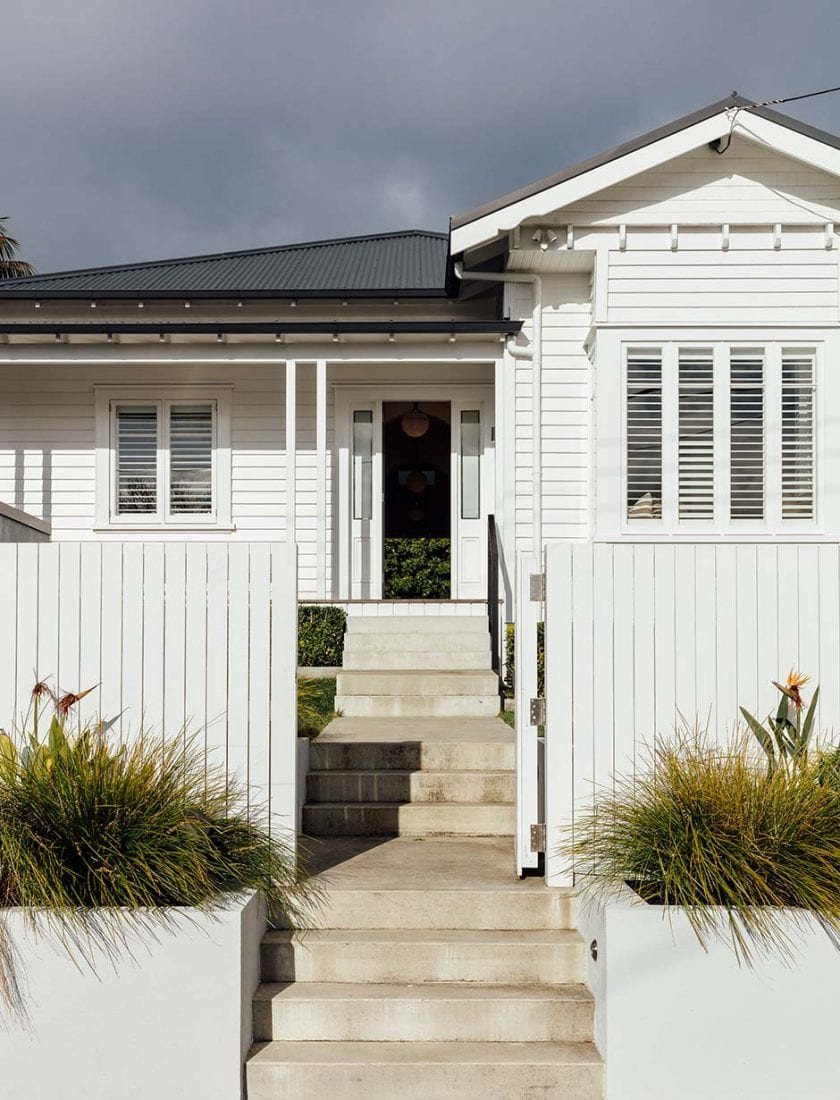 Despite their literally rocky start in this Northcote Point home (whose many foibles included cramped, cold rooms; next to no storage; no shower; and even a disused outdoor toilet), the couple keep a framed newspaper clipping of the real estate listing they spotted more than a decade ago. The dwelling had been owned and well cared for by a man who’d lived his entire life here, and with its good bones and lovely feel, on a large section in a great neighbourhood, the minute they saw it, they knew it was a diamond in the rough. 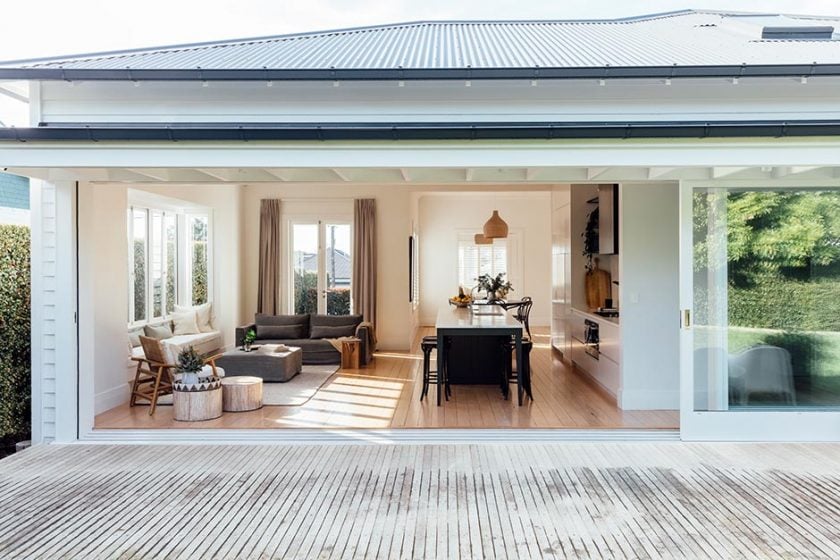 The pair had never renovated before, but Tim works in construction so was a dab hand on that front when the time was right. Plus, they had another secret weapon — Julie’s brother Gavin Donaldson of Neu Architecture. With an architect in the fold (along with the “amazing” team from Broswick Builders he recommended, and interior designer Sonja Hawkins, who they hired to design the kitchen and provide direction for the bathrooms and laundry after a tip-off from Julie and Gavin’s event-stylist sister Claire Donaldson) they were able to upgrade within their budget — and with the comfort and care only family can provide. 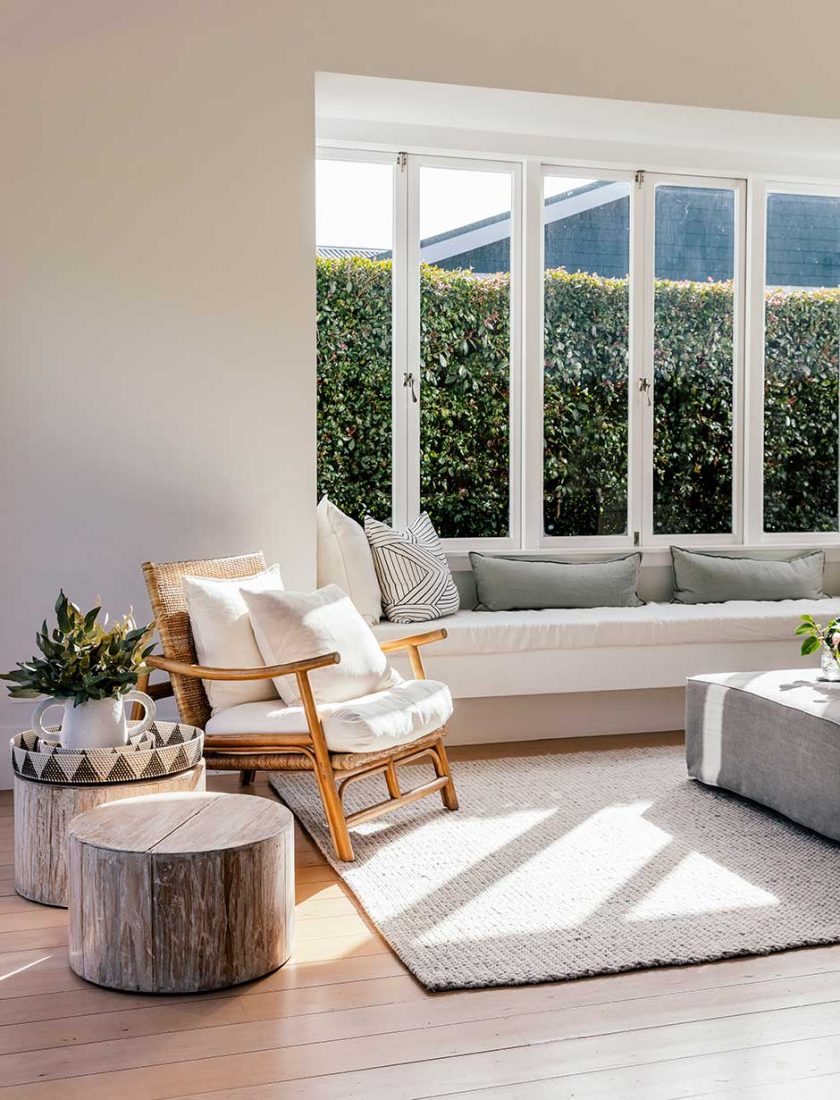 Julie enthuses about the incredible job Gavin did of honouring the bungalow’s heritage, sensitively preserving details such as the wide central hallway, which he turned into the key architectural element. Running right through to the back garden, it informed his design of the rear extension and allowed for another hero feature: four large sliding doors that open up the entire back of the house to the new verandah and lawn.
“We spent a bit of time trying to work out whether to keep the hallway or not, because it meant forfeiting a fourth bedroom, but we made the right choice,” says Julie. “Now the kids hang out in it more than they do their bedrooms, using it for all sorts of fun and games.”

This home is full of deft details, yet it’s also steadfastly minimalist — from Julie’s restrained décor to the multiple uses assigned to single spaces. With the addition of cavity sliders, the original front living room now doubles as a guest bedroom, while the laundry also functions as a scullery. Here, dual built-in bins take the place of a cumbersome washing basket. The washer and dryer are stacked inside a cupboard opposite a wine fridge next to a sink below a window that slides open to form a bar accessible from the garden when entertaining. The bench is big enough to be used to prep food when catering for a crowd, and above it all hangs the drying rack Julie chose over a clothesline in the backyard. 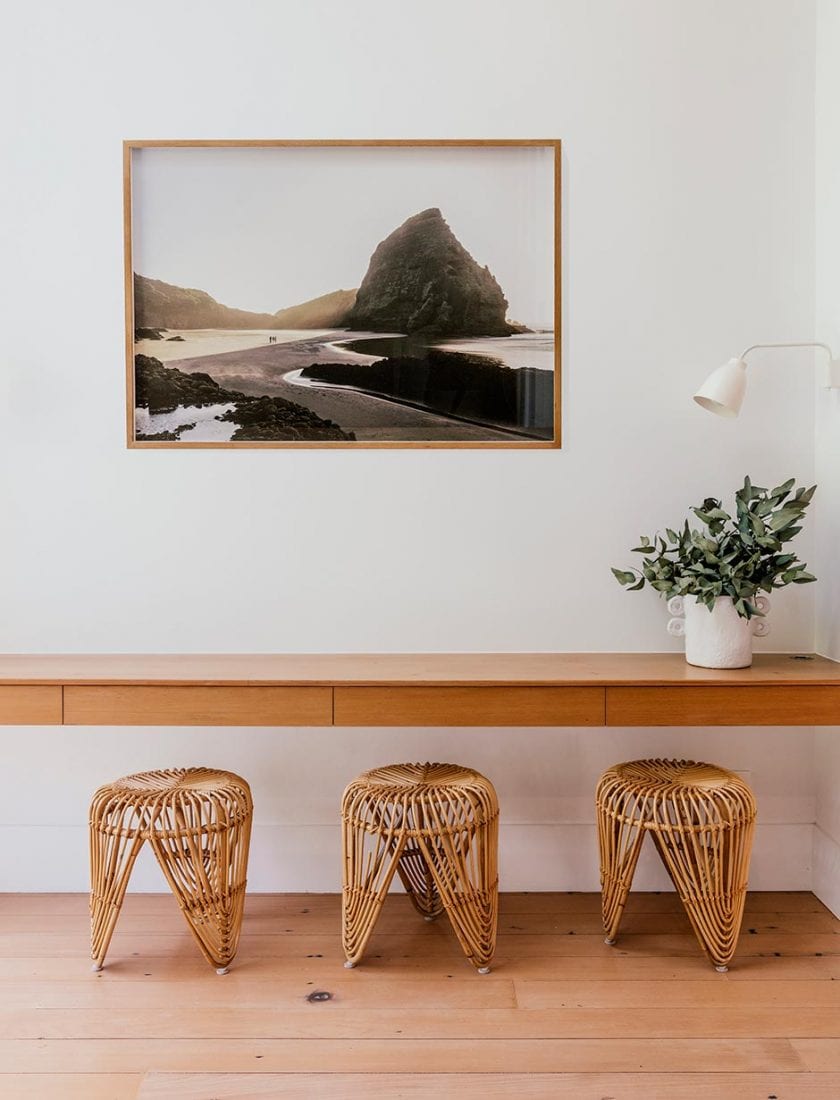 Abundant storage contributes to the home’s minimalist appearance, including an attic space accessed by a pull-down ladder, and a double garage, which Julie says is Tim’s favourite space. “It’s got carpet in it and is very organised. He keeps it tidier than the house!” 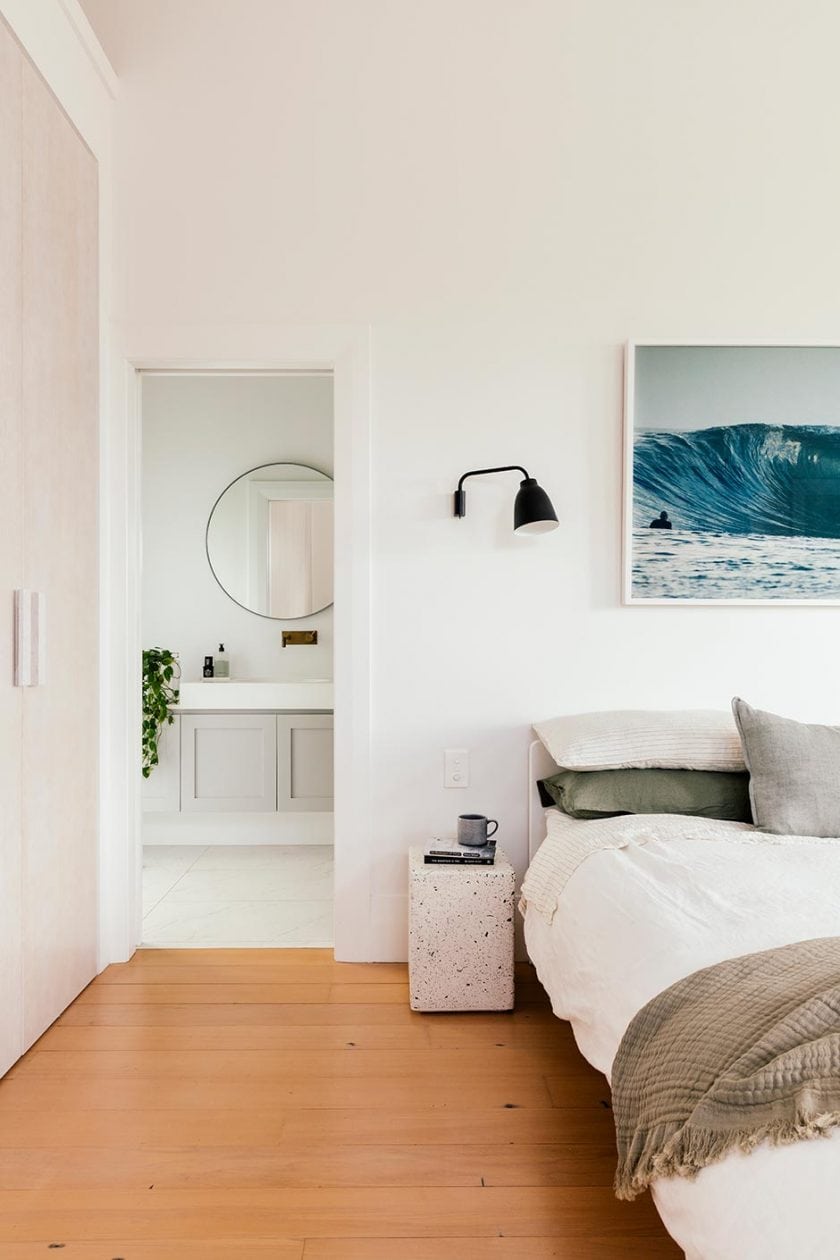 This impeccably renovated home is the embodiment of the ‘less is more’ philosophy Julie and her business partner Claire Whitehouse apply to their new eco-cleaning brand Everdaily (Julie also works as export manager for The Beauty Collective). “I hate clutter, so I’ve tried to reduce it in our home, and that’s exactly what Everdaily does for cleaning,” says Julie of the non-toxic concentrate they’ve devised to be diluted according to your needs in different rooms and used in refillable bottles with a utilitarian cool.
The pared-back colour palette she chose for this house was also driven by her desire for simplicity — blended with a touch of the jitters. “I’m a bit scared when it comes to colour, so I always revert to white, and when I do add some colour, it’s off-white or grey,” she says. “I tried to do colour in some of the rooms, but then freaked out and changed it back. There are a couple of grey curtains that I still wish I’d made white…” 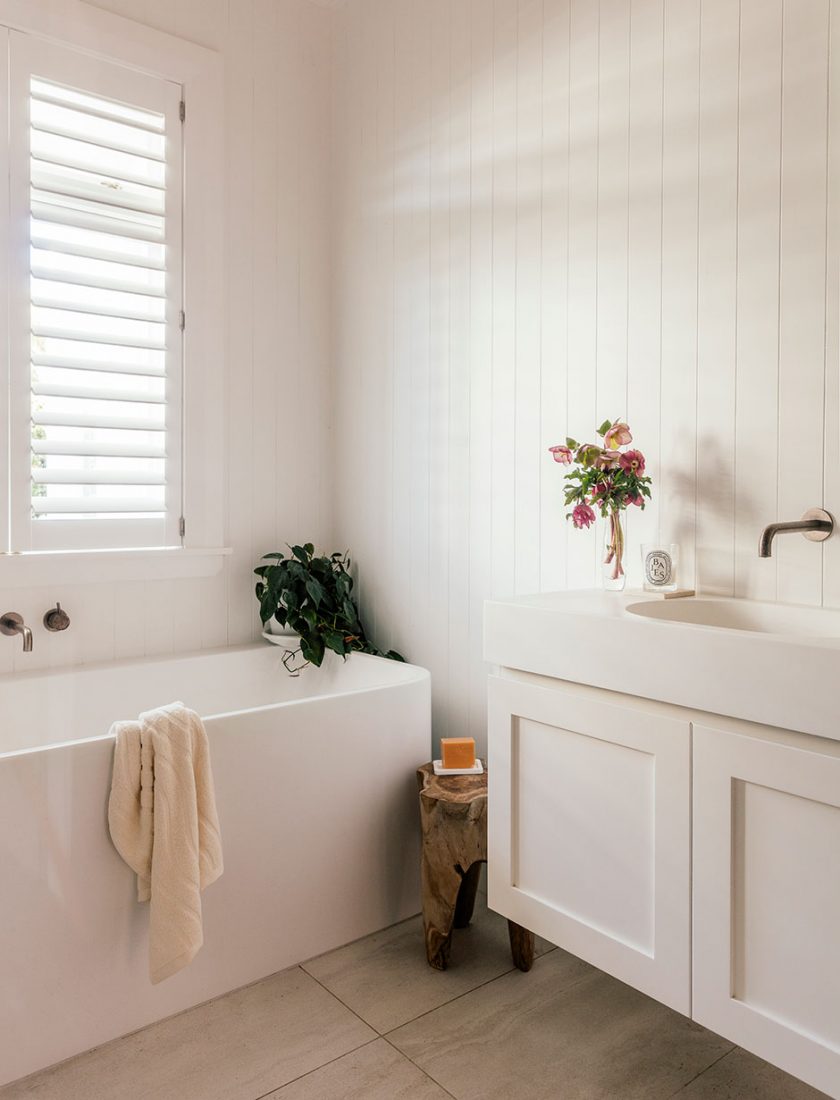 All white everything might not sound like a recipe for relaxation with three young kids in the house, but close to it suits this family just fine. “Life is hectic, so it’s really nice coming home to a spacious, warm, light-filled home,” says Julie. “The renovation has changed our lives. We can actually invite family and friends over and fit more than two of them inside!”
Rest assured that car jack is now just as it should be too — stored in Tim’s immaculate garage.