This couple has 100 Weddings in 100 Countries


Some couples are meant to be. Morgana and Devin lived in the same neighbourhood for 15 years, shopped at the same supermarket, worked out at the same gym and attended many of the same events – yet they never met until one fine day Devin found Morgana on OK Cupid. Everything that followed is history.

Today the couple is happily married, but one wedding ceremony surrounded by their friends and families and a round-the-world honeymoon was not enough for them. True adventurers that they are, they came up with the idea to travel the world together and renew their wedding vows wherever they go. The goal: 100 wedding ceremonies in 100 countries! 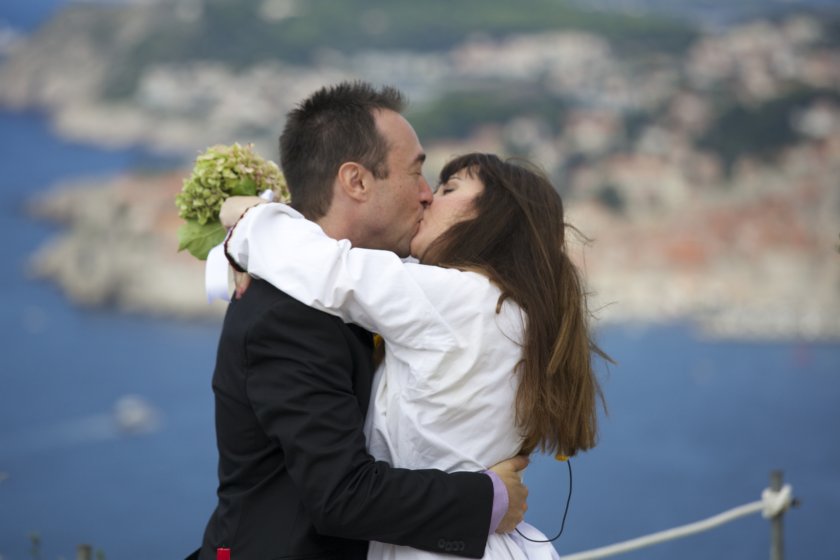 But we’ll let Morgana tell you more about their journey!

A week after our elopement, Devin had a press trip in Puerto Vallarta, Mexico. He got permission to bring me along, and we called it our honeymoon. We were passing by the iconic Our Lady of Guadelupe Cathedral downtown when Devin asked, “Hey, would you like to get married again?” I replied, “absolutely.”

A women on their tour turned out to be ordained in the US and their tour guide offered to say a few words about love. So up to the front of the Cathedral they went, took off their wedding rings and came up with new vows to renew their marriage which was only 13 days old at that point.

I was so moved by Devin’s vows that I burst into tears. It felt deeper and more romantic the second time, only 13 days after our first wedding. We exchanged rings, kissed, and strangers in the pews clapped and cheered.

We ran out of the Cathedral elated, with the desire to do this EVERYWHERE!

The next day Devin asked me to marry him 100 times in 100 countries. It was an easy yes.

The two had always been travel nuts and made that very clear on their dating profiles. Their first trip as a couple was about one year into their relationship and took them to former Soviet bloc countries Georgia, Armenia and Azerbaijan.

As a life coach, Morgana hosts Goddess retreats around the globe, and Devin’s job as a travel writer naturally means that he travels a lot as well. It was while they were both abroad – Morgana was leading a retreat in Bali and Devin was on assignment in South Africa – that Devin had the idea to propose to Morgana.

He was on a game reserve. Every morning at 4am he would walk through the bush to get to the building with the internet to skype me for a few minutes before my retreat began for the day.

On one of those treks to have a 5 minute date on skype,  a small tree a few feet away from him shook violently and erupted in a loud roar. He wanted to run, but his Sherpa grabbed his arm and said, “You run, you food,” and walked the rest of the journey to get on the internet to talk to me.

He says he started to ask himself, “What kind of a guy risks his life to talk to a girl for 5 minutes?” And then came to the conclusion, “I must be in love.”

Back home, Morgana picked him up from the airport and 24h later they eloped.

After their first wedding abroad in Mexico, Devin set up their website and there was no way to back out of this project anymore – two weddings down; 98 to go.

Between May 23, 2015 and August 10, 2016 the couple got married 17 times in 14 different countries. And there is something to be said for staying in a perpetual honeymoon state – My husband noticed that when I feel loved and safe in the relationship, his life is pretty terrific.

I know we’d be happy without the multiple weddings, but it’s really nice to carve out a break from the seductions of work and life to make the statement, “YOU are my priority.”

It’s also a great trick, when you’ve just had a fight and you HATE your spouse in the moment, to know that you have to work out your shit because you’re getting married again in the morning.

As travelers do, the couple prefers to experience the local culture of a place and is happy to adjust their wedding ceremonies to local customs. In Turkey, for example, Morgana rode down the aisle on a Turkey, and in Slovenia Devin had to carry her up the traditional 99 steps on Bled Island – the “99 steps of torture,” he calls them.

I ask Morgana about her quirkiest wedding ceremony so far, and she tells me everything about their day-long costume wedding in San Marino.

I grew up with fantasies of a costume wedding, so when San Marino invited us to have an all day medieval wedding, in costume, in their thousand year old tower, I had to do it!

For much of the day I was sitting in the tower in my medieval underwear, waiting for my husband to send me my dress, shoes, and jewelry via 4 knights and 2 ladies in waiting.

When my clothing arrived, the women sang medieval songs in Latin Vulgare, as they dressed me and my hair in medieval fashion. Meanwhile my husband was in the square, far below the tower, negotiating and signing a contract with my San Marino pretend-father, setting the terms for transferring ownership of me to my husband.

When the paperwork was signed, I was walked down to the square in a long procession (with tourists snapping photos below).

We were married in a church, in a medieval ceremony, followed by singing and dancing with almost all of San Marino’s government officials dressed in costume.

After the dancing, we were led back up the courtyard outside my tower, where the Republic of San Marino gave me a scarf and gave my husband a neck tie in the country’s colors.

Then my San Marino father pulled out his sword, dropped my husband to his knees, and knighted Devin as a Caballero di Repubblica di San Marino.

My husband is a bonafide knight!

Their families and friends cannot always attend the ceremonies, but Morgana tells me they don’t mind so much. My father is just happy to see I finally did get married. I’m sure he had given up long, long before I finally got married for the first time. I was already 47 years old.

With 86 countries and probably many more weddings to go, the journey of Morgana and Devin is an exciting one to follow. Next up is a trip to southern Africa – South Africa, Lesotho, Swaziland and Mozambique – and South America is high on the couple’s list as well.

To follow their adventures and videos of their previous weddings check out their blog or follow them on and .