The owners of this property suspected it had huge potential, and it turned out they were right.

Many moons ago, a couple were cruising the curved countryside of rural Tauranga’s Pyes Pa when they stumbled on a diamond in the rough — a piece of land surrounded by native trees with an amazing view over the hills and down towards the city. Although it appeared virtually uninhabitable, it was love at first sight for Rachael Petersen, who said to her then husband-to-be, Bevan Jeffries, “This is where we’ll retire.” 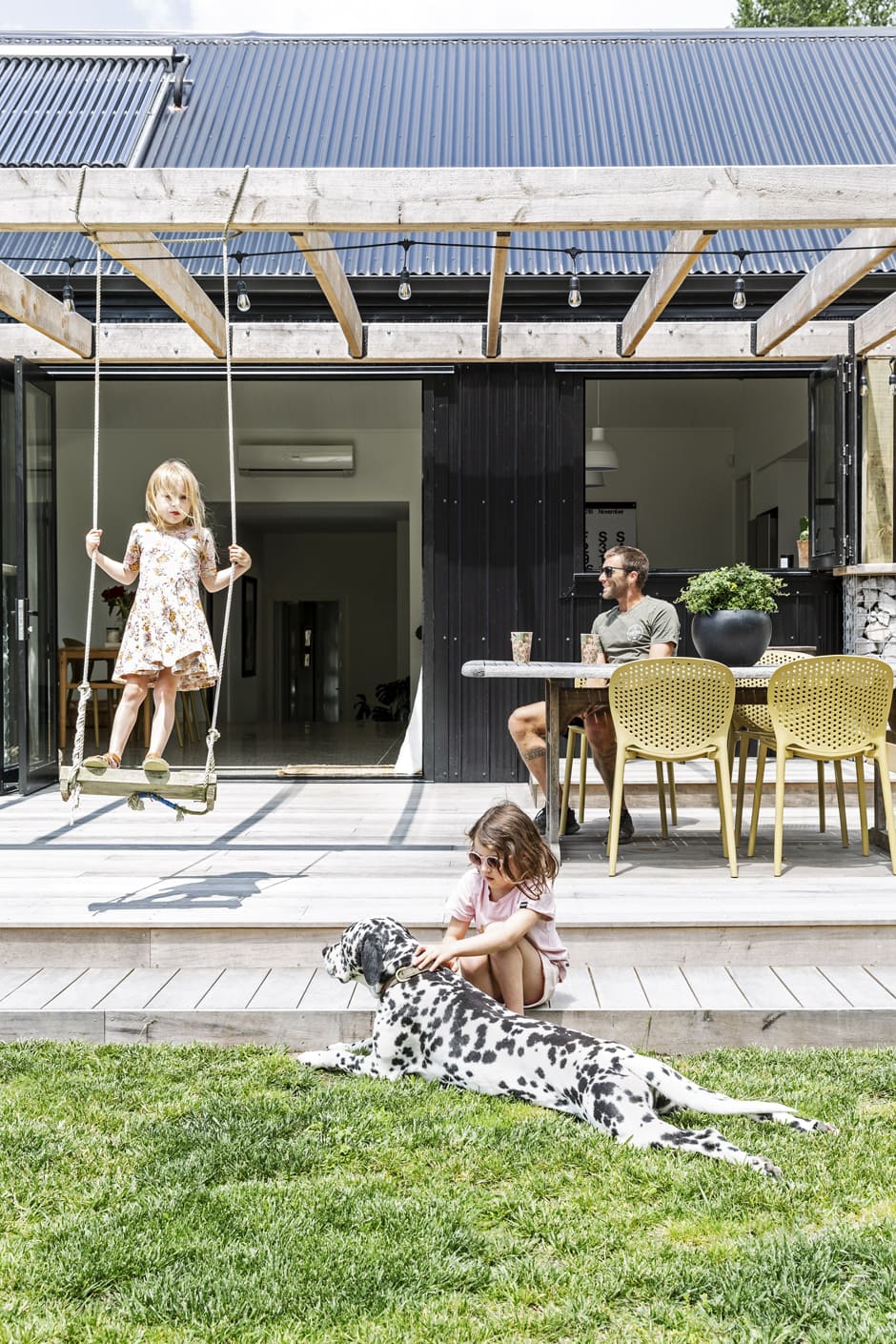 EXTERIOR The couple dreamed up the initial plans for the home themselves. Bevan wanted it to be comprised of two separate yet connected boxes, and it was Rachael’s job to arrange the puzzle pieces inside to make it liveable for their family. Large windows and doors allow natural light to flood into the interior, combining with extra-thick framing, double wool insulation and solar panels to keep the eco home as warm as toast.

One wedding, two children, a psychology degree and the founding of their outdoor-construction business Landscape Developments later, Rachael was casually browsing Trade Me when she saw the land for sale. “I couldn’t believe my luck,” she says. “I put the kids in the car and drove straight there, called Bevan when I arrived to tell him the news that we were buying our dream section, and quickly put in an offer.” 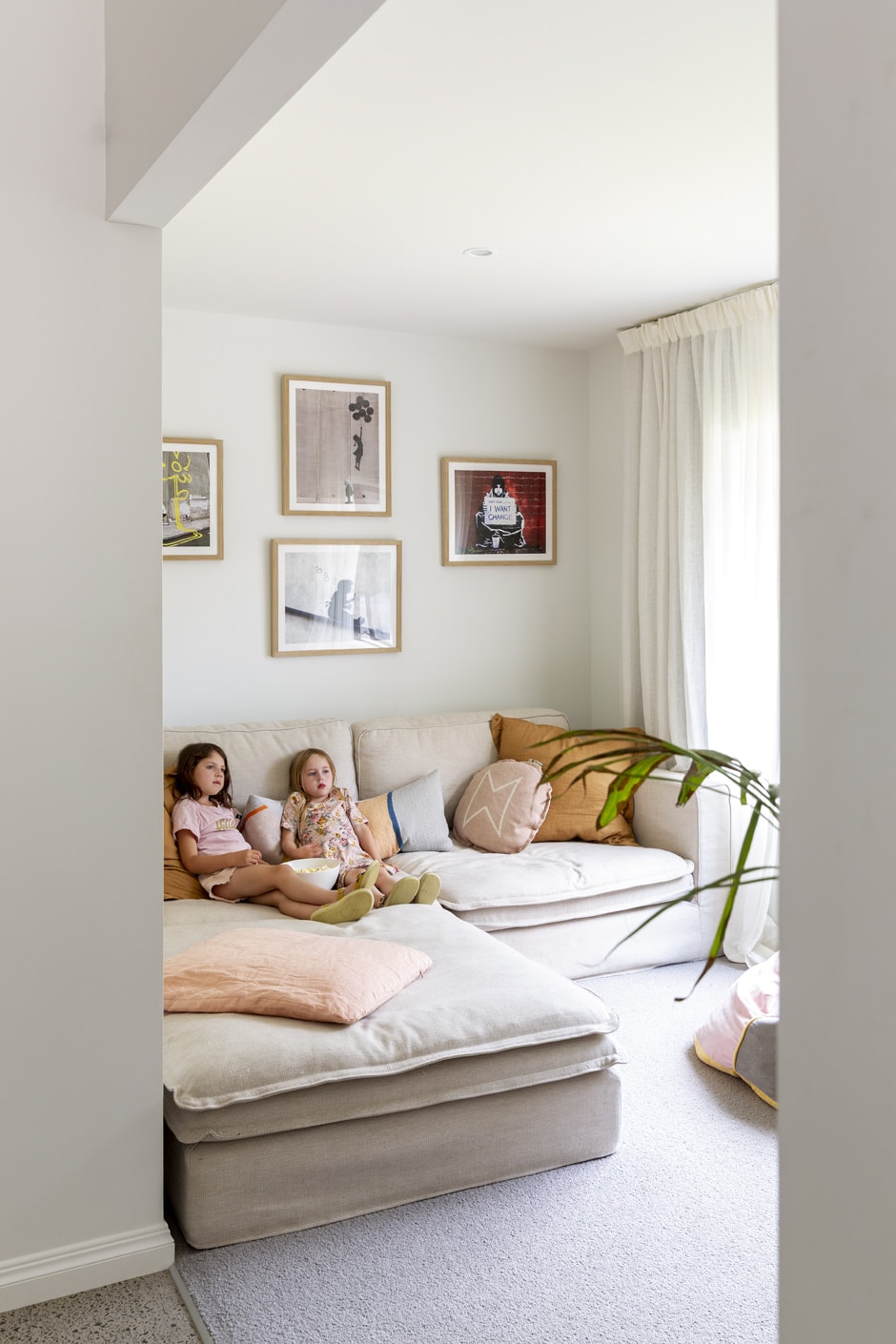 MEDIA ROOM Stella and Ruby take a load off on a sofa from Early Settler. Decorating the wall are some Banksy prints Rachael and Bevan had framed. The sheer white curtains give this space a dreamy quality and elsewhere in the house juxtapose the concrete floors nicely.

“It was a pretty gnarly site,” says Bevan of the hilly property. “Most people with any sense would have walked away.” But with Rachael’s determination driving the plans and Bevan driving the digger, they set about slowly transforming the land into the embodiment of their vision.
“It took us a year to draft up the floor plans, and then another year for Bevan to figure out how we were going to get a house pad on the site,” says Rachael. “He carefully sculpted the land like a sandcastle bit by bit until it was ready for building consent.” 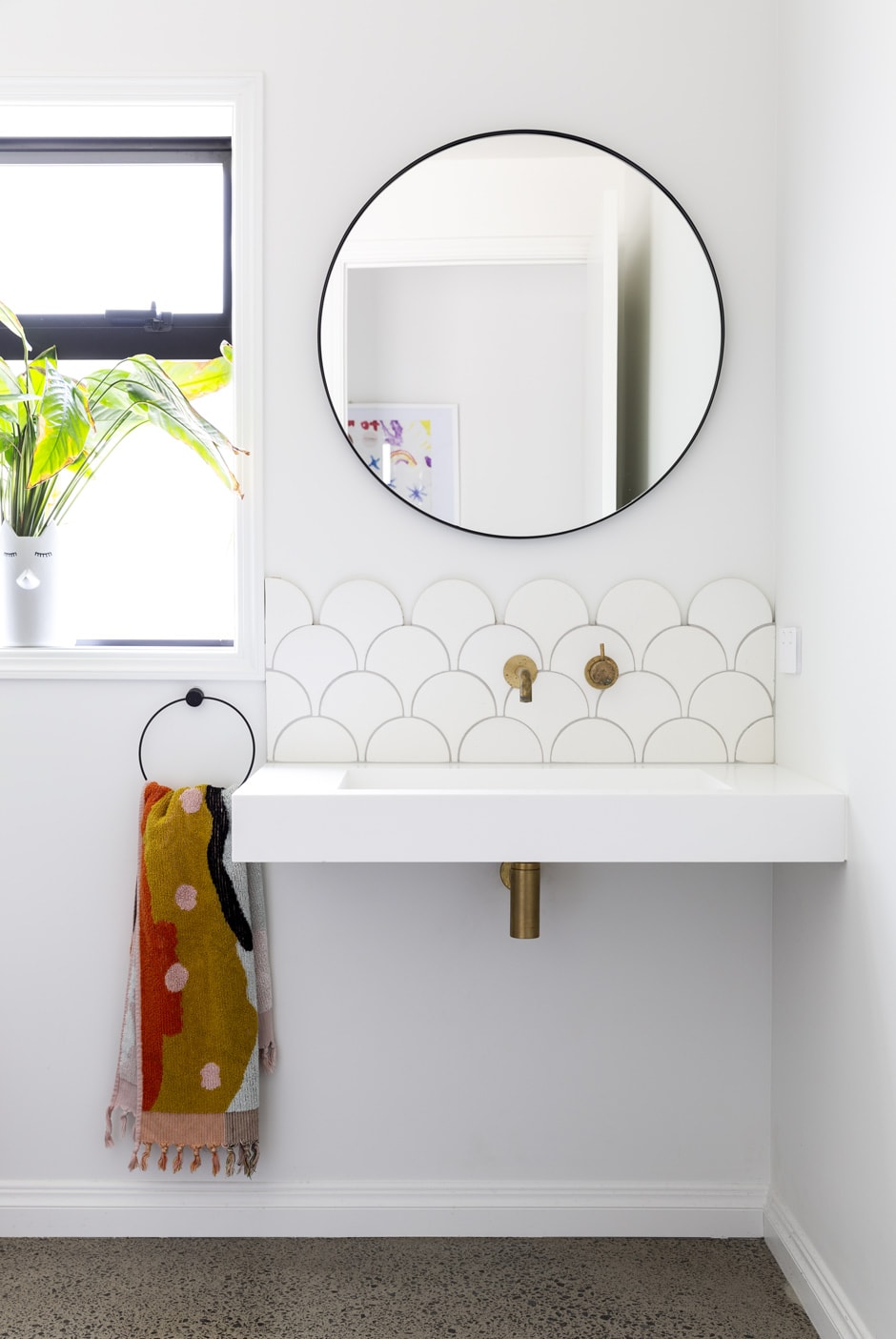 BATHROOM Waikato eatery Punnet provided inspiration for the main bathroom. “Their counter is covered in the most amazing scallop tiles,” says Rachael. “I’m a firm believer in listening when things speak to your soul, and these were yelling! It was difficult to source some that went in the direction I wanted with no finishing like silicone around the edges, but I found some at Tile Space in Tauranga that were handmade in New Zealand and had some lovely imperfections.”

The ground was officially broken in April 2017 and after a roller-coaster eight-month build (during which Beven broke his back in a bike accident), the three-bedroom house was ready to move into. “After the intense year we’d had, I think I was in shock when I was finally able to wake up in this house in this dream location,” says Rachael. “It still blows me away every single morning.”

MASTER BEDROOM The master bedroom features a Flower Petal headboard by Family Love Tree from Shut the Front Door, striped pillowcases by Society of Wanderers from Teapea and other bedding from Foxtrot Home. The linen throw is from Città and the Slowdown Studio blanket is from Sunday Homestore.

Spacious, minimalist and designed to maximise the view, the gable-roofed home was built using sustainable materials wherever possible. “Our youngest, Stella, is asthmatic, so our main priority was building with products and fabrics that would be healthy and safe,” says Rachael, who shares the journey on her Instagram . “Much of the materials we used are sustainable, biodegradable and made from natural fibres, which also made it quite easy to achieve the look and feel I wanted for the interior. 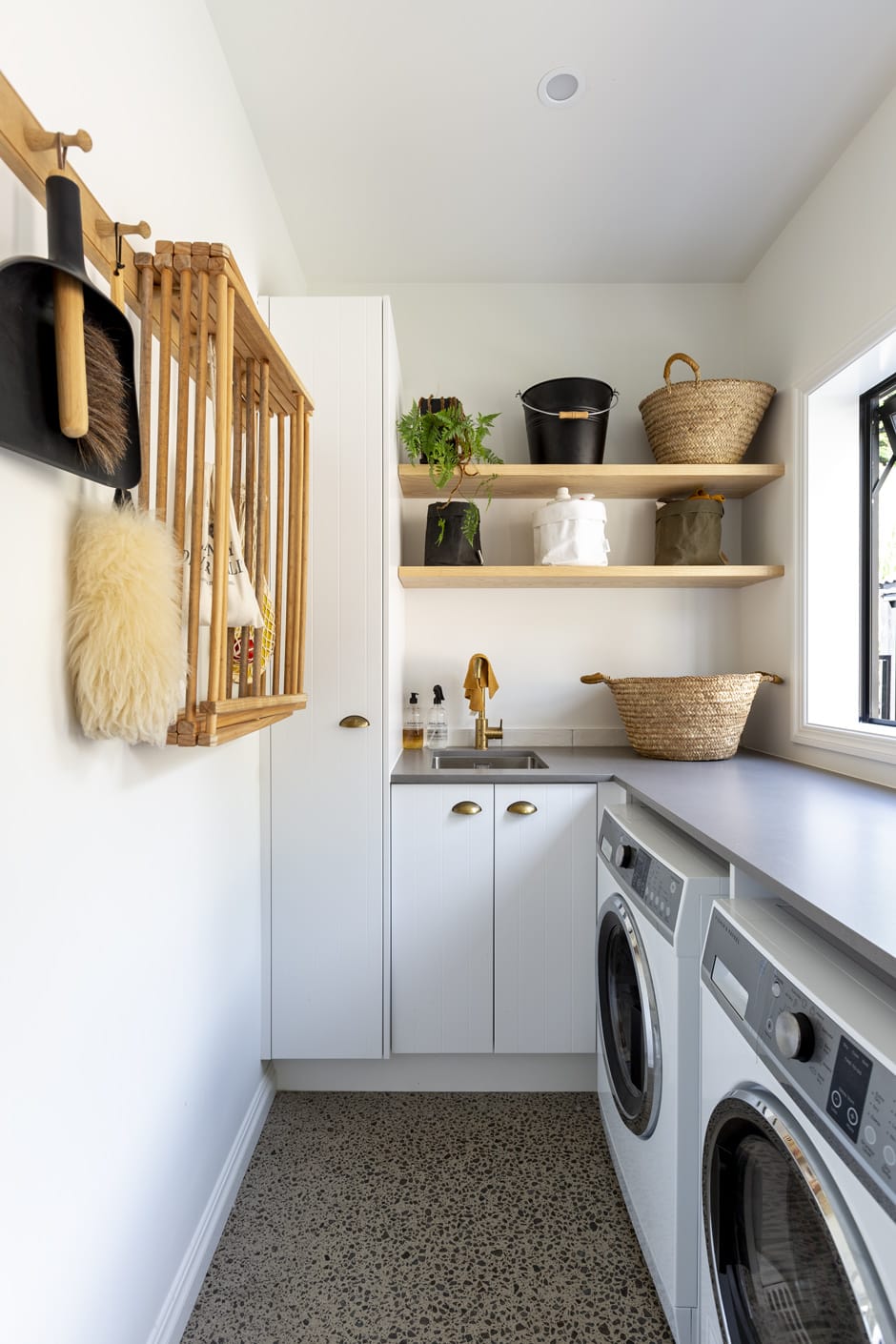 LAUNDRY The couple wanted their laundry, kitchen and scullery to share a cohesive look, so American ash wood was used by local craftsman Nigel Cotterill of NDC for the shelving throughout, and they went for the same tiling, benchtops and brass accents.

“I’m a sucker for symmetry and sight lines,” she continues, summing up her overall aesthetic. “Pour a heap of Dulux Wairakei into the mix and that’s us.”
Bevan says he’s proud of what they’ve made and loves how well the house suits their family. “At this stage, it’s our forever home,” adds Rachael. “I’m stoked we did it and have no desire to build again, but never say never, right?”
With the determination and skills this pair possess, we should probably wait and see. 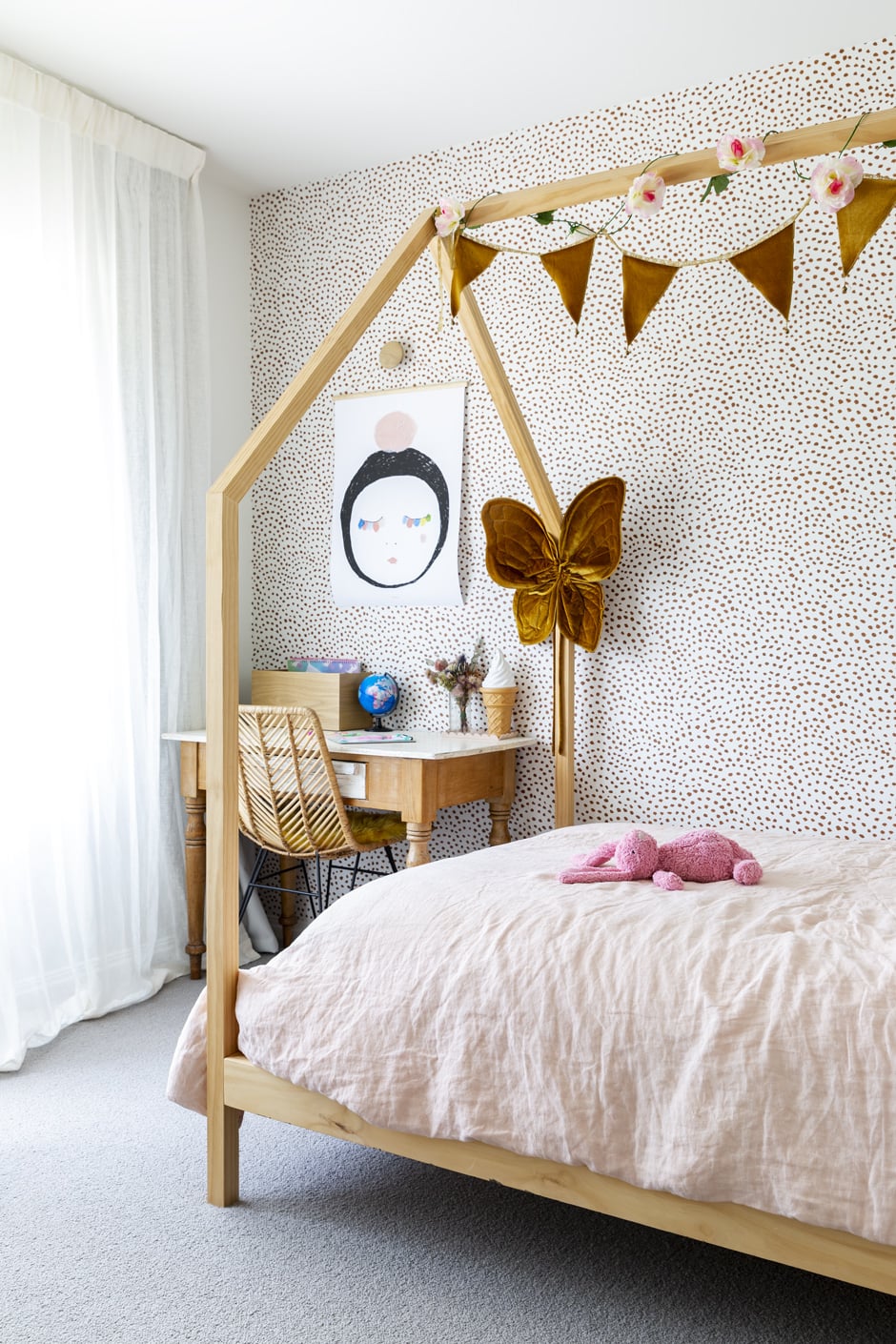 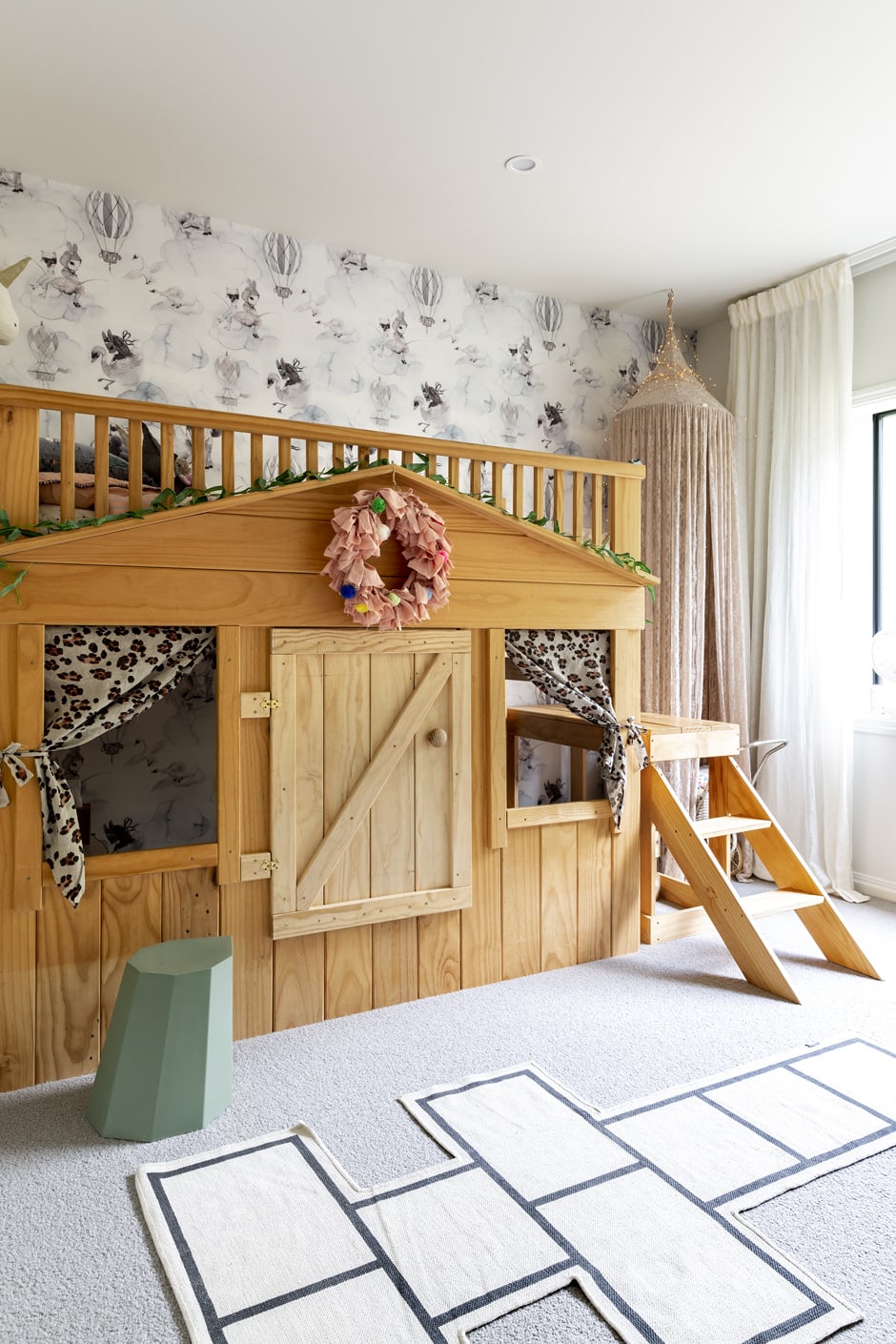 RUBY’S ROOM The couple describe their daughters as “an extremely cute but sassy chalk-and-cheese duo”. Both girls were given the chance to choose some aspects of their bedroom décor, a responsibility that Ruby took particularly seriously, requesting among other things a desk to use for her ‘planning’ and a big bed she can take with her when she leaves home. STELLA’S ROOM The backdrop to this enchanting sleep space is Oh Clouds wallpaper by Mrs Mighetto x Jimmy Cricket from Kids Caravan, which Rachael invested in years ago and stored away for future use. The bed was a set of bunks that Bevan cleverly reimagined.