Skiing, Saunas, and Schnaps: How To Spend A Winter Weekend in South Tyrol


There is one single thought that has reliably pops up in my head on all my travels, no matter the destination, experiences, or length of the trip: “I want to live here”. I don’t know what it is about foreign countries and exotic places –  they have this magical power of attraction over me that immediately makes me want to abandon all the structures that I have built for myself at , wherever that may be at the moment, and set up tent anew, then and there, forever. Surprisingly, this also happens when I re-visit a place that I’ve lived at before, even when I didn’t like living there in the first place.

Usually when it happens, as it undoubtedly will whenever I travel, I start to imagine which apartment I would pick, how I would furnish it, where I would go grocery shopping, and what I could grow in the climate I’m currently in – and that’s about as far as I get before I’m distracted by another sight to see,  to climb, or to try.

This time was different, though – there has never been a trip that had that sentence, “I want to live here”, clinging to my mind as strongly, persistently, relentlessly, as when I visited South Tyrol, . 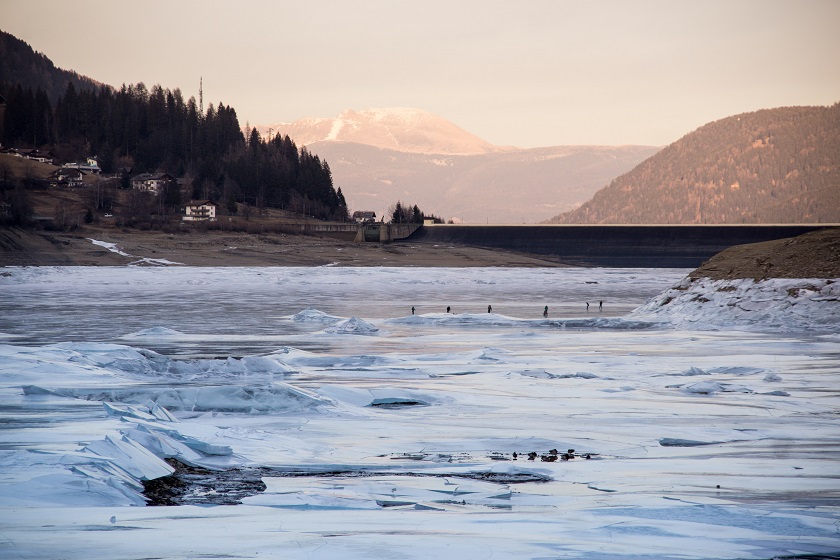 Granted, the region has a bit of an unfair advantage over other parts of the world, since it’s full of the one thing I love most: mountains. But since it’s by far not the only place on Earth that boasts gorgeous mountains, high altitude lakes, and remote and endless pastures, that fact alone is not enough to explain my falling in love with  and surroundings just as easily. Even my boyfriend, a perpetual homebody whose conclusion after each and every trip is “It was beautiful, but so is home”, was smitten, and that says a lot. 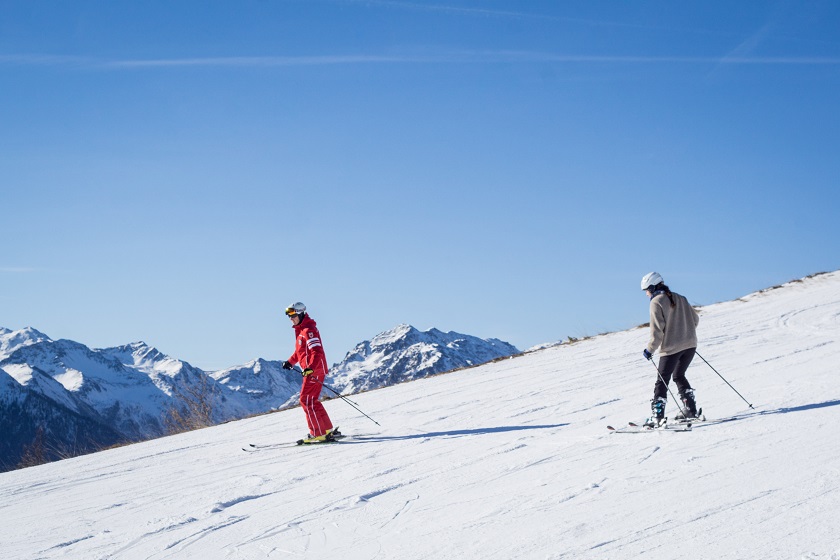 We started our trip right in the middle of the beautiful peaks that span South Tyrol and went skiing in rustic Ulten Valley, or Val D’Ultimo. This German-Italian bilingualism is characteristic of the entire province – while South Tyrol is now the territory of Italy (albeit in as an autonomous province), it belonged to the  Empire until the end of the first World War. As a result, much of the population speaks German as their first language. The fight over what many considered an extension of Austria’s federal state lasted well into the 20th century, with several independence movements and fierce battles that resulted in South Tyrol being the autonomous province that it is now.

It wasn’t until we met our skiing instructor, Berni, that we realized just how Austrian people can sound here. He greeted us with a thick Tyrolean accent that, with its comfort of the familiar, immediately lifted all my fears of going down the slopes on two separate pieces of wood that I have accumulated over the years of only, and proudly, . Up until now, my excursions into the world of skiing had been, let’s say, moderately successful – with me not starting to cry out of fear and/or frustration being the best outcome yet. As I realized in the two hours we spent with Berni, that might have been because up until now, I have ventured out on skis on my own, never taking the time to actually get someone who is trained to teach skiing disasters like myself how not to break your legs and actually enjoy the experience. Berni kindly showed me some tips and tricks and patiently guided me down the beginner’s slope, so that by the end of the lesson, I was able to not only ski down the steeper slopes as well, but actually feel like I’m having fun. 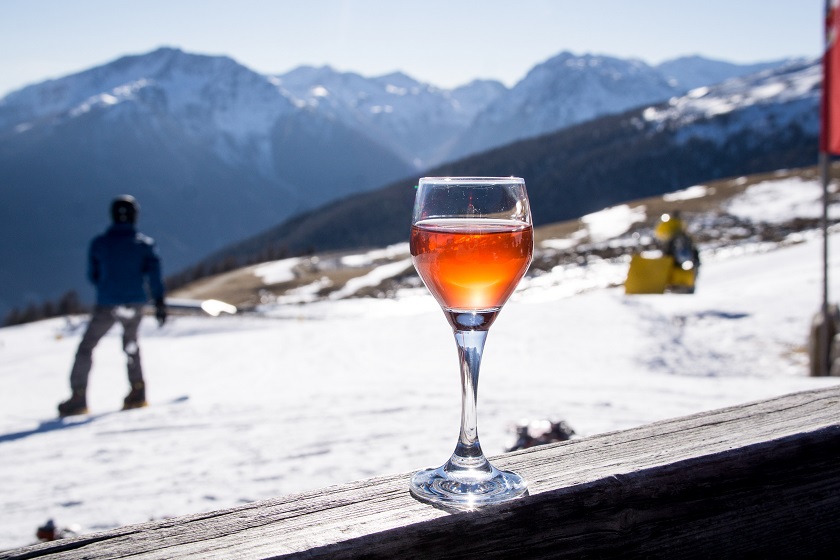 Both the boyfriend and I needed a little break after two hours of learning how not to break your legs on skis, so we headed over to the for some much-deserved food and maybe just a little bit of schnaps. The fact that you can eat spaghetti at the mountain lodge helped to remind us that we were still in Italy and not somewhere high up in the Austrian Alps, even if the accents around us told us otherwise. It was just what was needed to be ready to face the slopes again (me) or ride extra slowly and wait up every ten meters for an other half who is stumbling down the mountain in an effort to learn skiing (him).

Relaxing after a day of skiing: Sauna at Arosea Life Balance Hotel 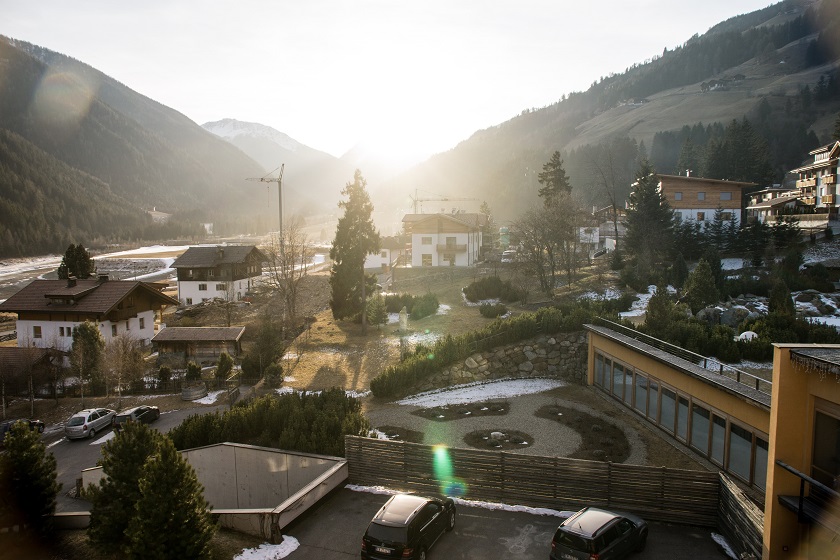 While I thoroughly enjoyed the skiing experience, largely thanks to the excellent classes, the new sport was still quite exhausting for me. With my newly improved technique, I lasted a lot longer than on my previous outings into the world of skiing and didn’t constantly feel like I was fighting against the mountain in order to keep standing on my two skis, but my muscles were still aching after a full day of being out on the slopes. A nice, hot sauna sounded like just the thing to help me relax after the skiing adventure.

Our hotel for the weekend in Val D’Ultimo, , left no wishes unanswered in this respect – they have a sauna area that spans across two floors where you can basically try any sauna or steam bath that you can imagine. I’m not really the type to enjoy very hot temperatures, so my favorite was the pine-bio sauna, which is kept at a nice 40° to 60°C (100° – 140°F). What’s more, the relaxation areas are beautifully designed, with water, tea, fruit, and nuts ready at your disposal to compensate for the minerals and water that you just sweated out. 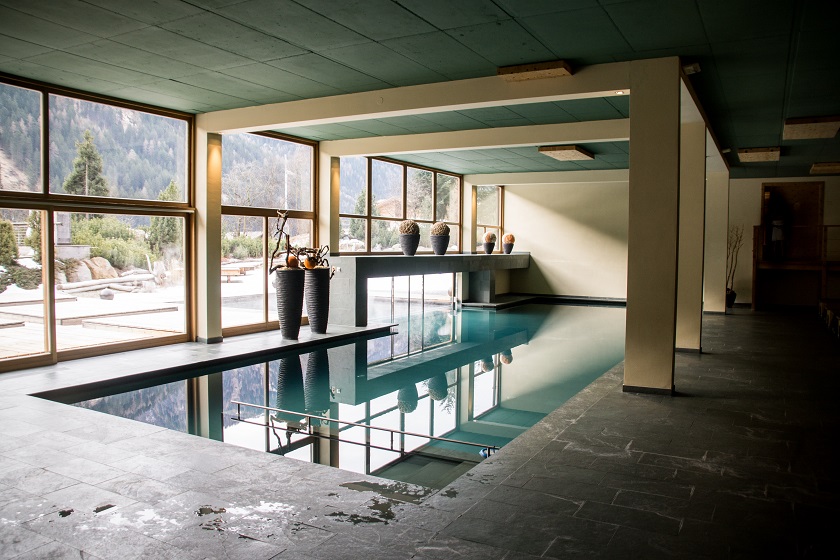 It was hard to leave Ulten Valley after only two days, since not only was the beautifully designed hotel begging to be enjoyed a little longer (a fitness room! A pretty pool area! A spa! An in-house library, a sports shop, the best-equipped breakfast you have ever seen!), but the surroundings have a lot more to offer than we had time for, as well. We packed up and headed to our next destination anyway: Merano, a cute little spa town in the middle of the Italian , was waiting for us.

We spent our day in Merano walking through the charming little streets, exploring the many, many footpaths that were made for patients at the town’s health resort, and climbed up the old gunpowder tower to get the best view. Mind you, this was before we had checked into our  and found out that we actually had access to our own little roof garden, jacuzzi and great views included – but more on that later.

We strolled along the Passeggiata Tappeiner (Tappeinerweg), walked along river Passirio on the Gilf Promenade, continued on the Passer promenade until we saw the “Wandelhalle” (an Art Nouveau style building that looks very, very Habsburg and was originally built to provide a peaceful setting for patients of Merano’s health resort), and stopped by in at least five different sports shops, all selling the finest gear to go out and explore the mountains. 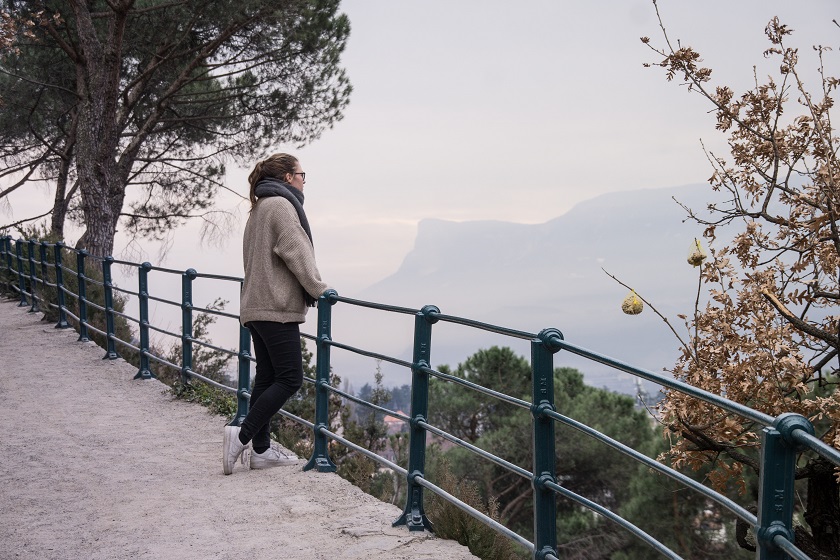 In the end, we both agreed that maybe we should stop being distracted by sporty souvenirs, as cool as they may be, and headed for lunch. All good intentions were immediately thrown out of the window as soon as we entered , though; the little shop/eatery offers only local products and promotes regional specialties that one cannot help but buy lots of to take back home. Our stomachs filled with the delicious sandwiches, perfect for a small lunch break, we dove into the market and emerged an hour later with wines, schnaps, snacks, and beauty products – all made in the region.

To top it off: Spa treatments and pizza

The rest of the day was spent in blissful peace, as we checked in to and almost couldn’t tear ourselves away from the rooftop vista, spacious room, and probably the friendliest reception service that I have ever encountered. 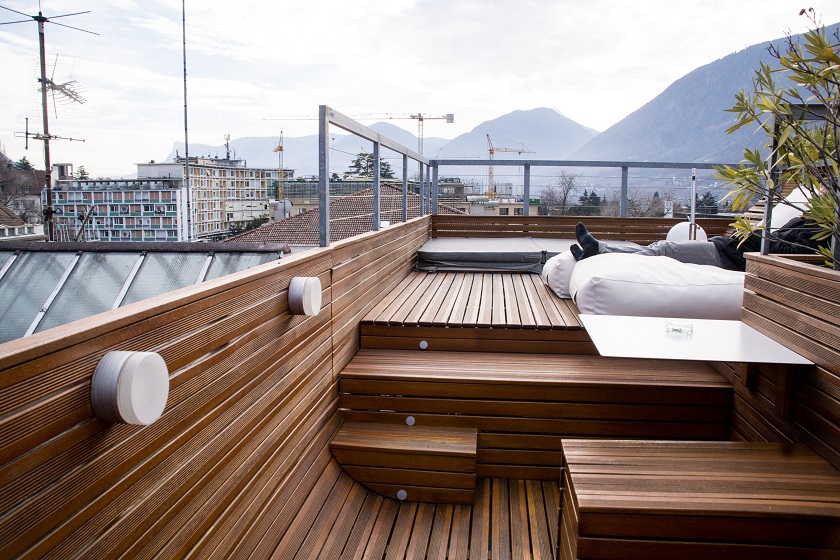 There was only one thing that could do the trick and get us out into the wider world again: . The spa resorts are what Merano is famous for, so leaving without spending at least some hours in the warm waters, enjoying a spa treatment, or sweating in one of the many saunas is not even an option. I was treated to a thorough peeling with finely-grated marble from the nearby Vinschgau valley that left me with skin as smooth as a baby’s, before heading down to the saunas where I immediately forgot every task and annoyance that was waiting for me back at home. 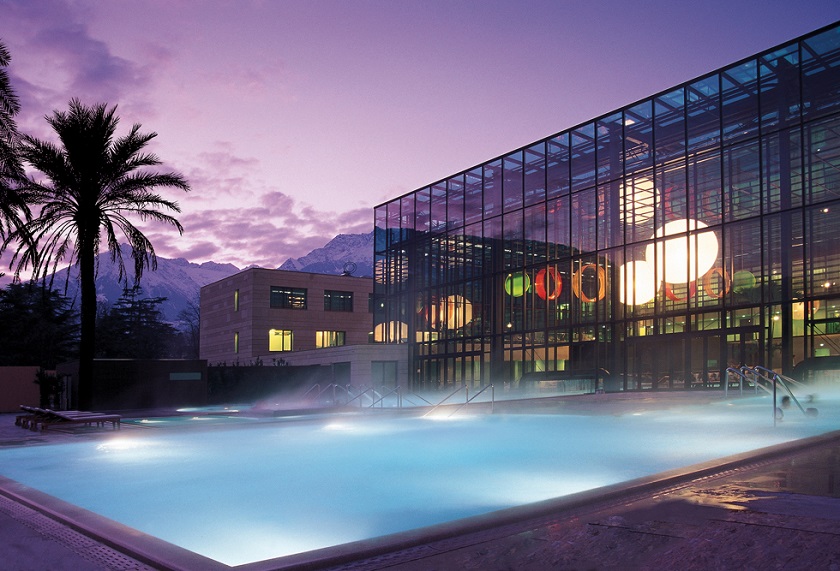 The marble peeling isn’t the only treatment that draws on local products to create a homey and relaxing spa experience – Terme Merano pays keen attention to only using regional ingredients in their beauty treatments – you can try South Tyrolean apple, wool produced in Val d’Ultimo, or locally sourced honey, to name just a few. Local products are also used throughout the rest of the resort: my number one sauna was the one with steamed hay from the region, its sweet smell making me wish I could do this at home in my apartment, just to recreate the scent.

We finished the day with a dinner date at , which has got to be the most welcoming and homey pizza place in town. It feels like the chef, Maria, knows each and every person who comes to dine – and she’s just as friendly to the newcomers. We felt welcomed immediately and gorged ourselves on the starters and delicious pizzas. If you have no idea what to order, just ask her, she’s more than happy to help. This also goes for the long, long list of craft beers that you can order from.

Sadly, even the most wonderful of weekends has to end at some point, so after spending one last night in South Tyrol, skinny dipping in our private hot tub above the rooftops of Merano, we drove up North back home to Austria, where people only speak one language and pasta is not on the list of traditional dishes – two things that haven’t really bothered me before, but I kind of wish weren’t true now that I have seen South Tyrol.

And the sentence, “I want to live here”? It’s still ringing in my head. Before I start packing up my belongings to move to South Tyrol for real, there are a few obligations keeping me where I am right now – but one can always start to think about how many pomegranate and olive trees would fit in the small garden I have in mind for that theoretical South Tyrolean home… 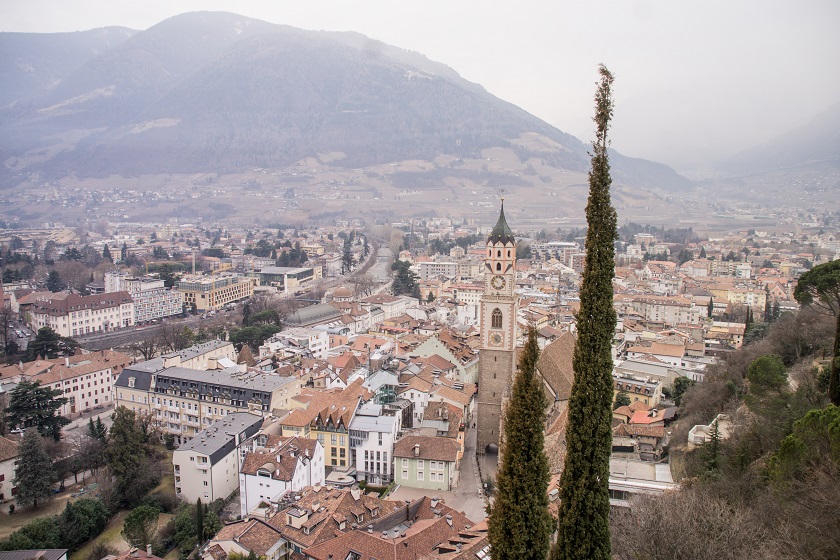 Now, what about you – which place makes you dream of leaving your normal life behind, packing up your things, and just starting a new existence far, far away?

*We were kindly invited on this trip by ; all opinions stated are my own.