SAY HELLO TO ARCHES AND OTHER TRENDS FROM SFF

Going through my photos from SFF last week has taken me a while, not only did I spend two full days at the fair, I also went to so many great events in different showrooms and venues. Design overload, in a good way though. Quickly summed up the colors are even warmer and theres a lot of different hues of browns to be seen. Textiles are more important than ever before, we want the homey feeling, but in a sophisticated way. Scandinavian simplicity mixed with Italian refinement and elegance, curved shapes and a softer expression. Also a lot of sculptural shapes and references to architecture from ancient Greece. The arches was seen almost at every other booth at the fair. A major flashback from the 90-ties, luckily the ones at the fair was so much more elegant.

Menu (above and below) with an always busy booth showed a lot of news () and one of my favorites is the Eave modular sofa below. When we talk about arches this sofa is also inspired by architecture and has gotten its name from the «eaves» – the lower edges of the roof that overhang a wall. Designed by Norm Architects. The Troll vases on the table is available in a new amber color this season and is spot on the yellow-brown trend, designed by Anderssen & Voll. 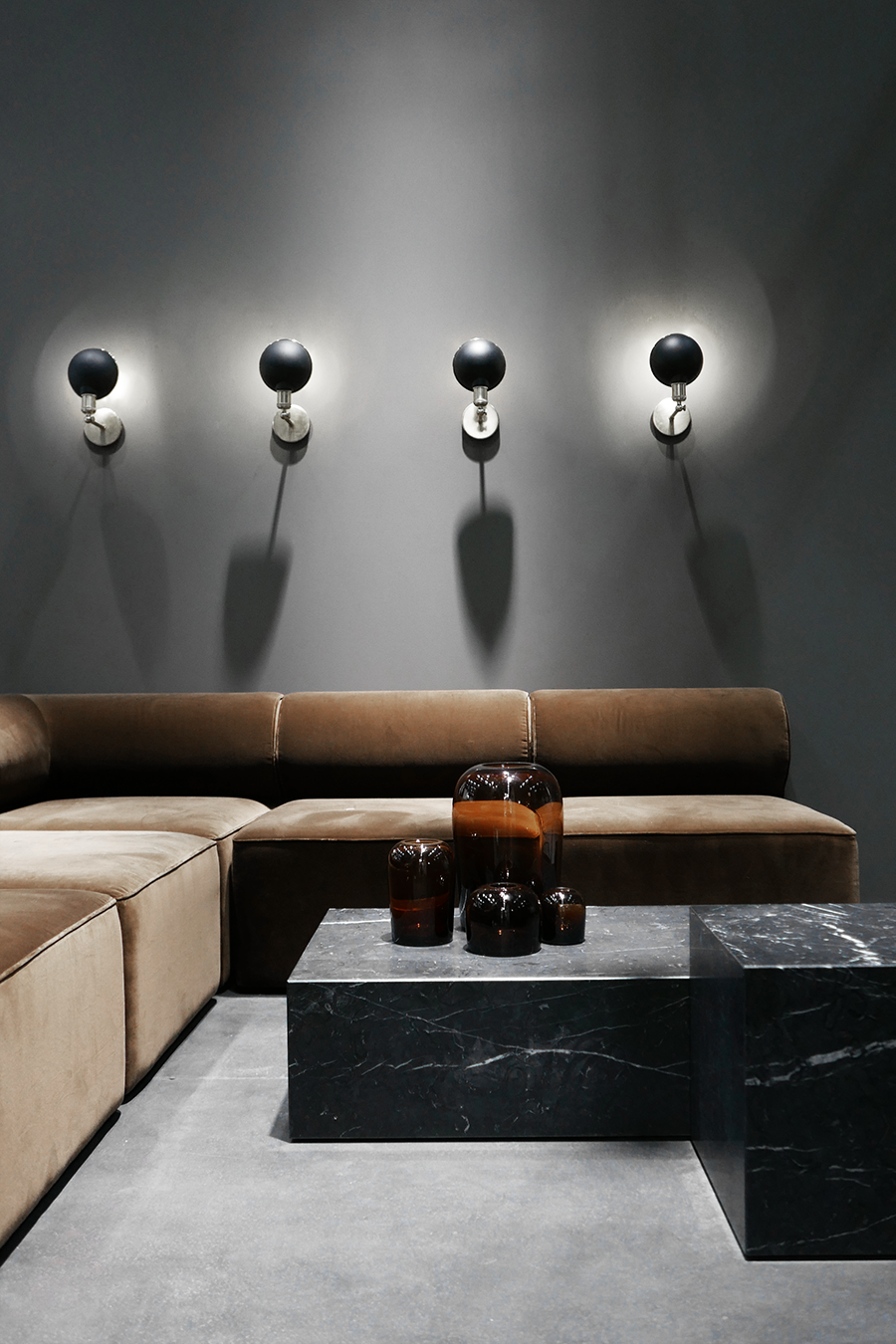 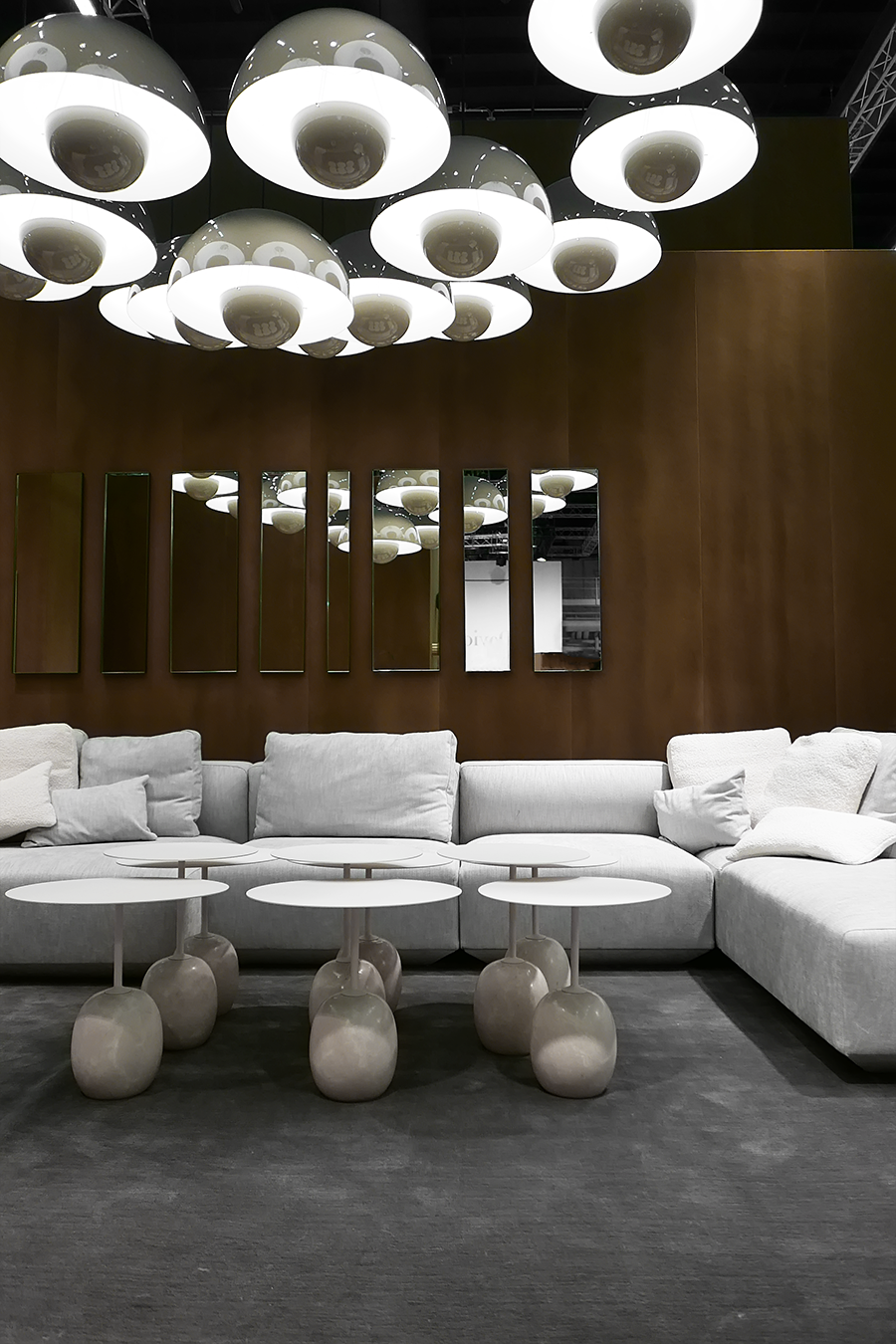 &tradition shoved interesting news, the modular sofa above called Develius is the first one from the brand looking as homey as this one does. The tables gathered in front of the sofa is new and which I think look very much like the Knockout tables from Friends & Founders (below) that were launched back in 2013. Besides the base is oval shaped while the Friends & Founder ones are square, round and pyramid shaped. Regardless, Luca Nichetto has designed a super beautiful table I liked surprisingly more when I saw it for real. The mirrors called Amore on the (brown suede) wall is designed by Space Copenhagen for the SAS Royal Hotel and their recent renovations. So simple yet beautiful. And perfect for a home as well as in a hotel room. 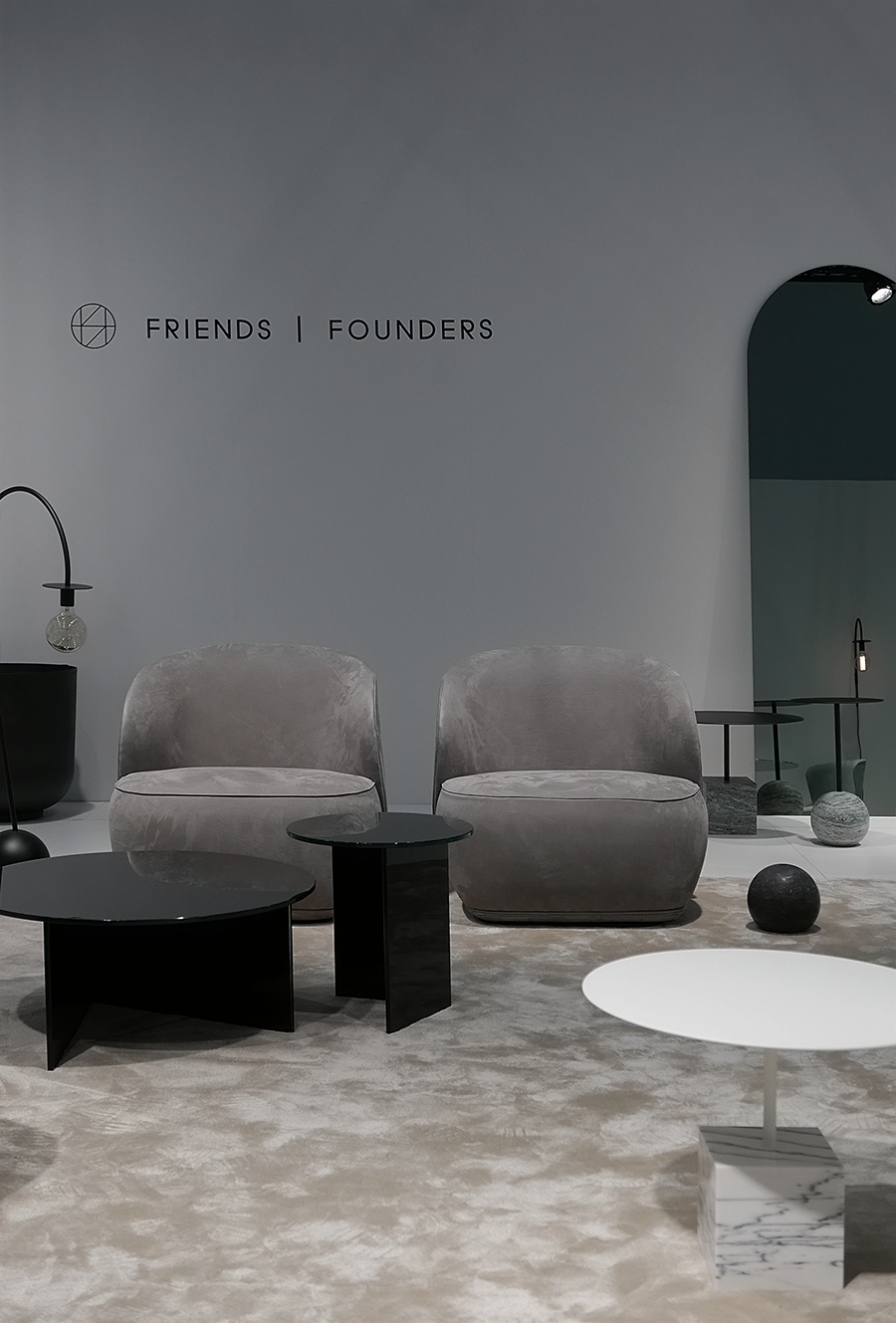 Did I mention arches? Passing booth no three with arches I couldn’t help myself from starting taking photos. Above an arch shaped mirror at the Friends & Founders booth, below Jaime Hayons Milá chair at the Magis booth. 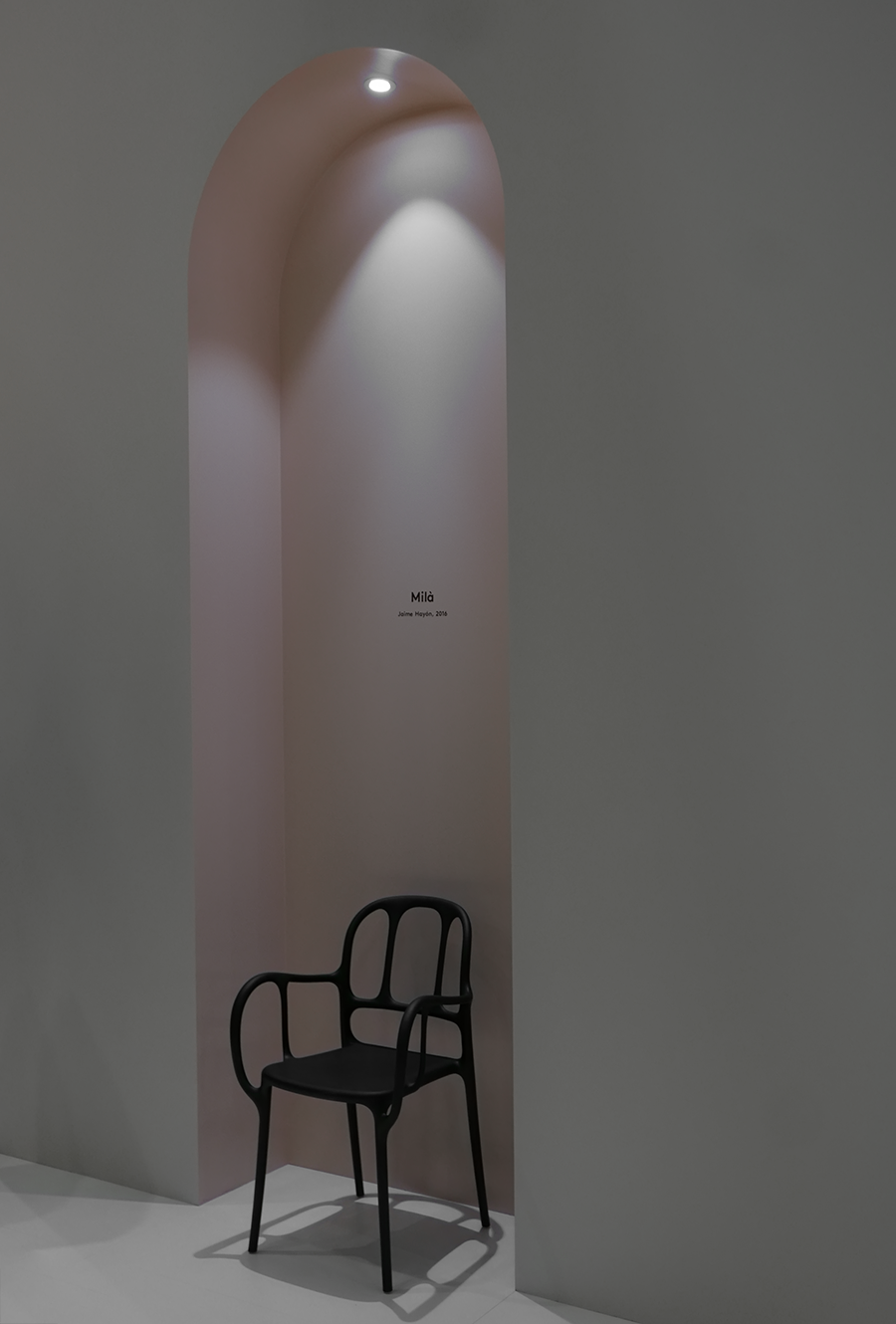 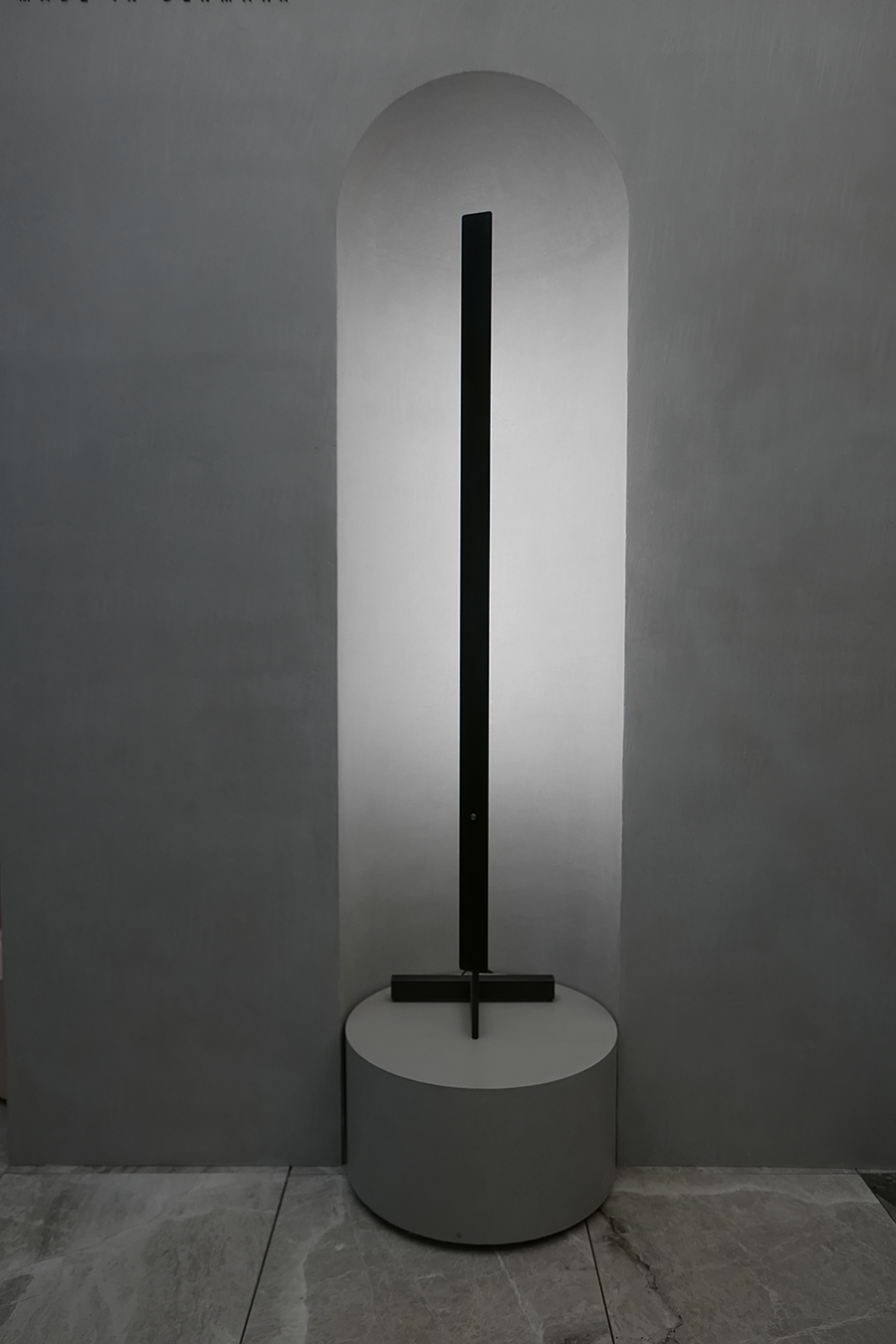 I was looking forward to see the lamp above after seeing . The first floor lamp by Danish Anour is simple yet beautiful. The base is a detail on point, making the lamp look like a slender sculpture at the same time as it has the shape known from the pendants by the same designer. 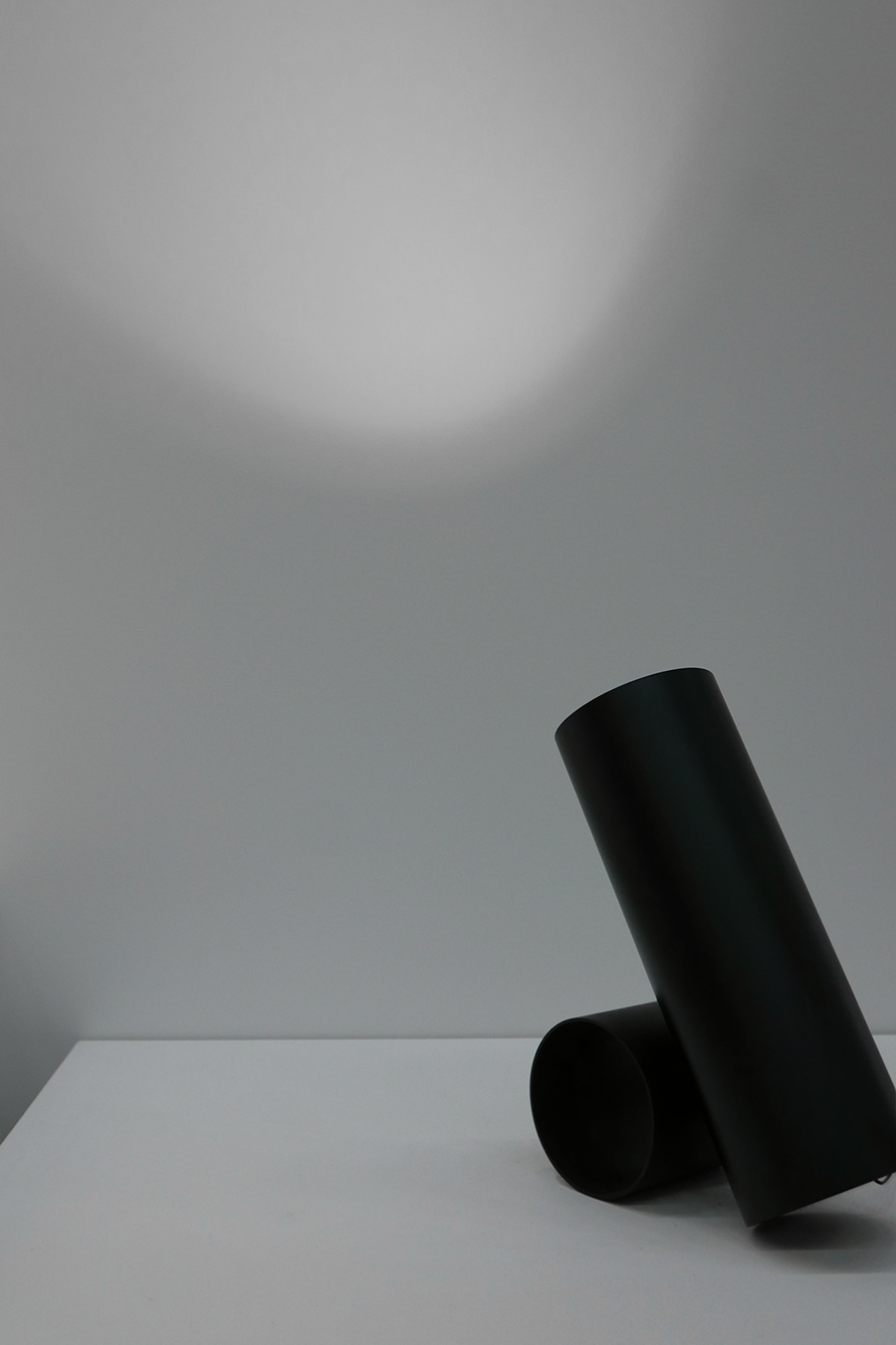 More cool lighting by Flos, Sawaru designed by Japanese Nendo. We are familiar with Nendos NJP lamp for Louis Poulsen, and this one has the same simplicity. Japanese and Scandinavian design shares the same aesthetics in many ways, and its easy to like Nendos design. The lamp looks simple but when adjusted it change in composition. The minimalistic table lamp consists of two cylinders. One features the light while the other is the base that holds the light up at three different angles. 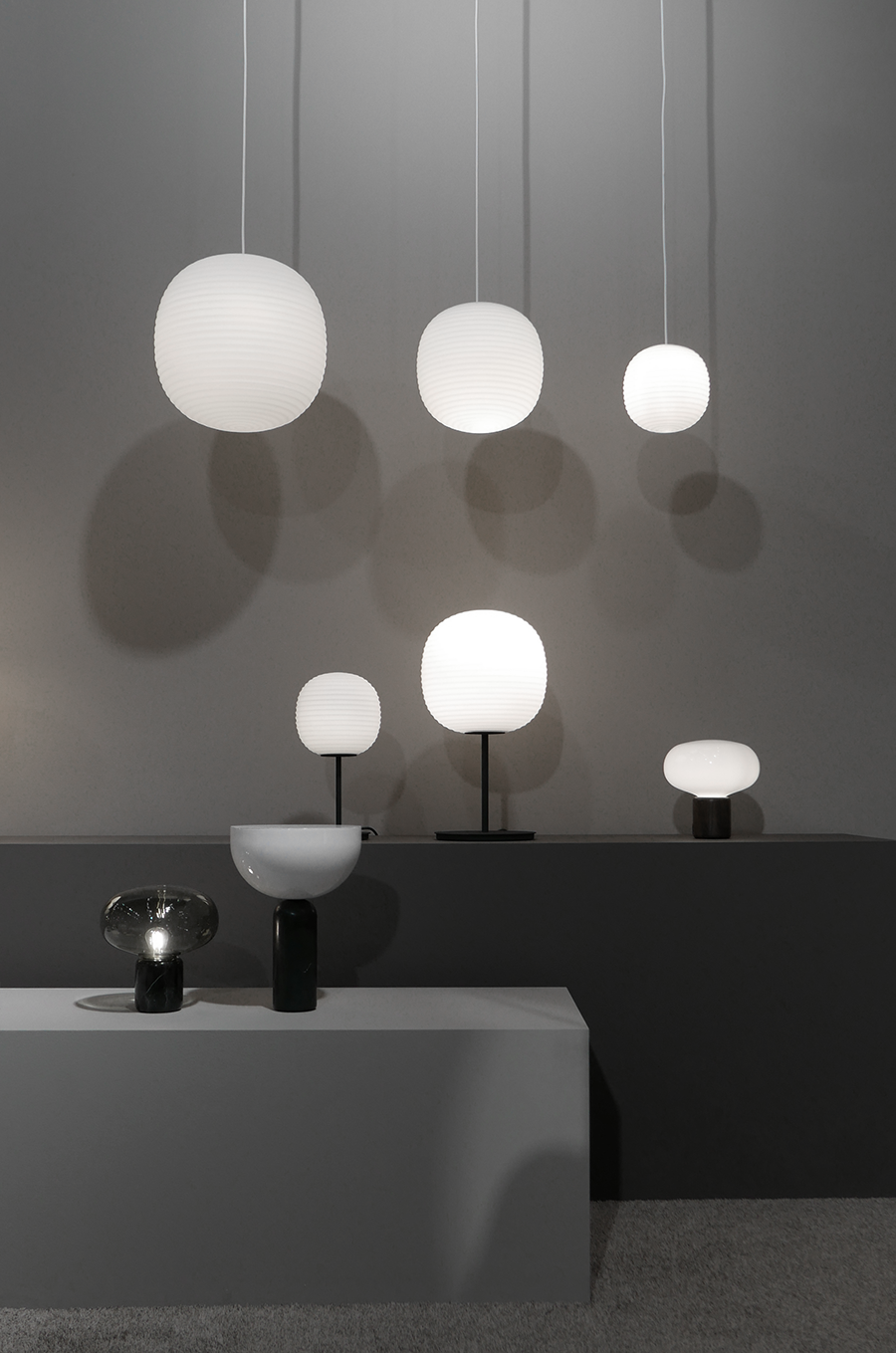 New lamps were also shown by New Works at the fair. Kizu, a long time favorite of mine, designed by Norwegian Lars Tornøe is now available with a black marble base in addition to the white one. Also in a new and smaller size than the one I got. The Lantern pendants designed by Anderssen & Voll has become part of a series with both table lamps in two sizes and a floor lamp. 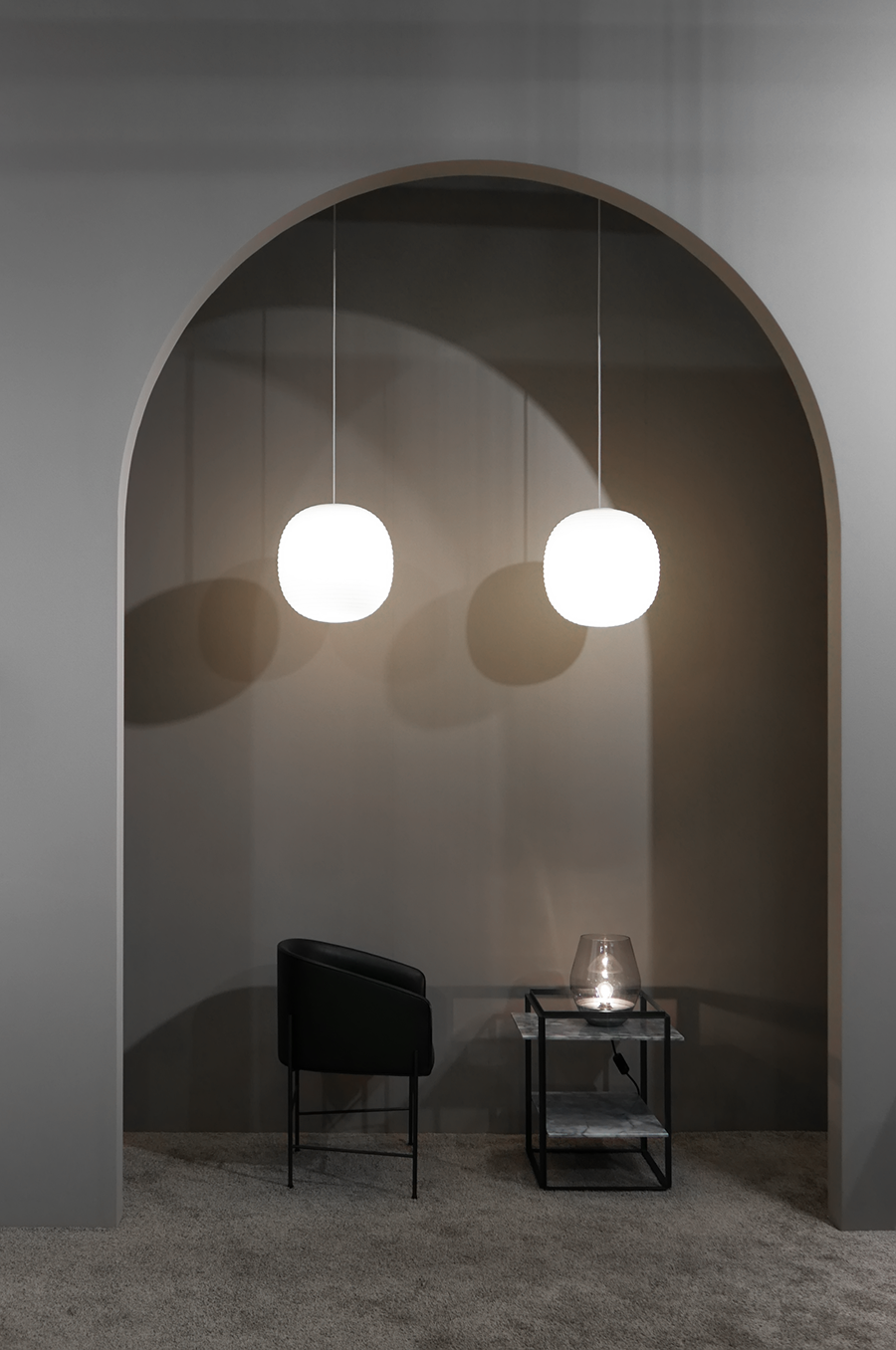 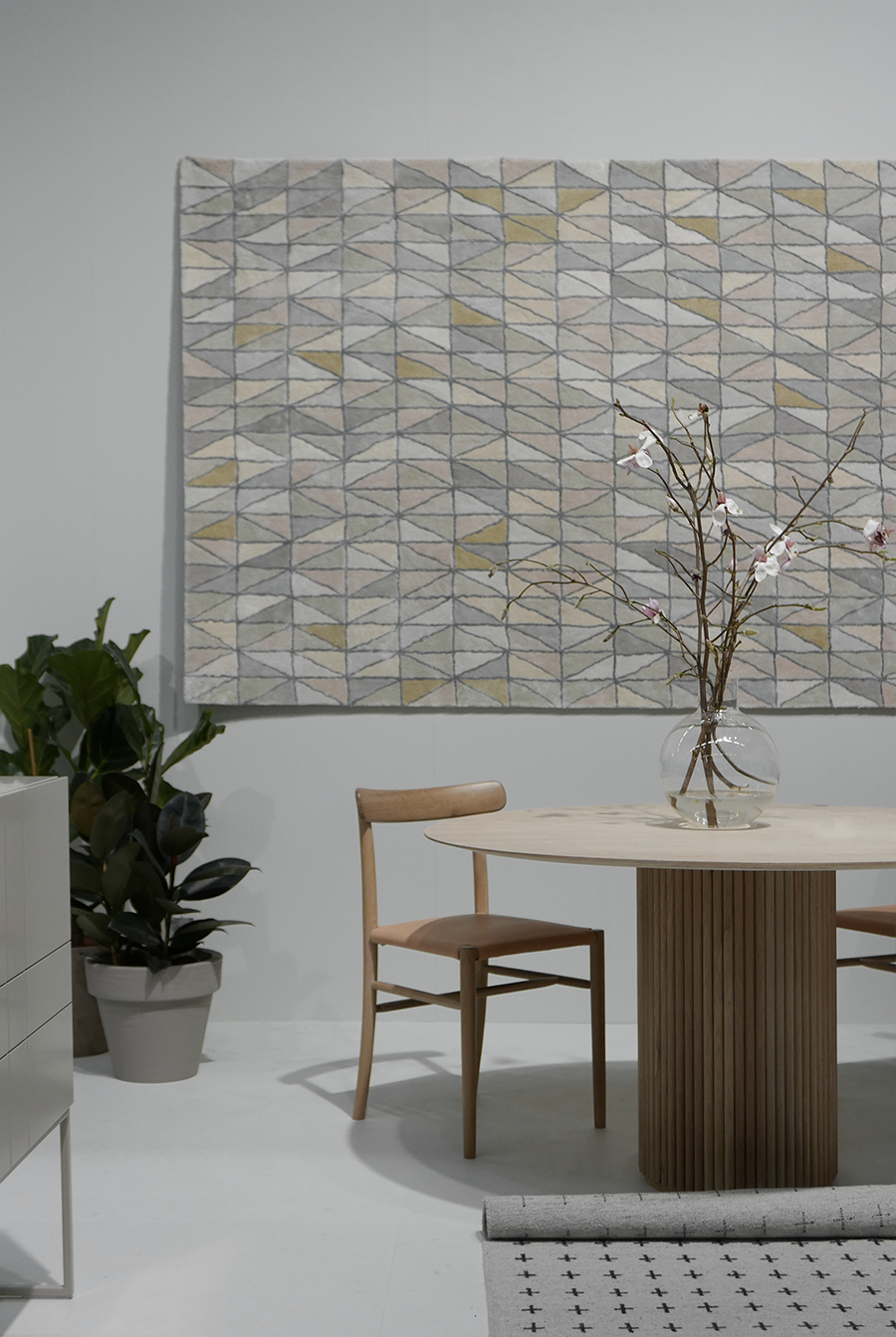 Swedish Asplund launched a new table series at the fair. Scandinavian looking in the choice of material, the column base draw references from the past. The dining table above is part of the new series called Palais where Anya Sebton and Eva Lilja Löwenhielm also launched side tables and two lounge tables. Available in oak base with oak or laminate table top.

Its been two years since I visited the Austrian rug company Tisca and their factory in Romania. This year they were present at the fair with a beautifully designed booth (Lotta Agaton) showing a selection of their range of handmade rugs. The structures and qualities is so nice, and the rugs can be ordered in custom sizes available in 96 different colors and 26 structures. More and . 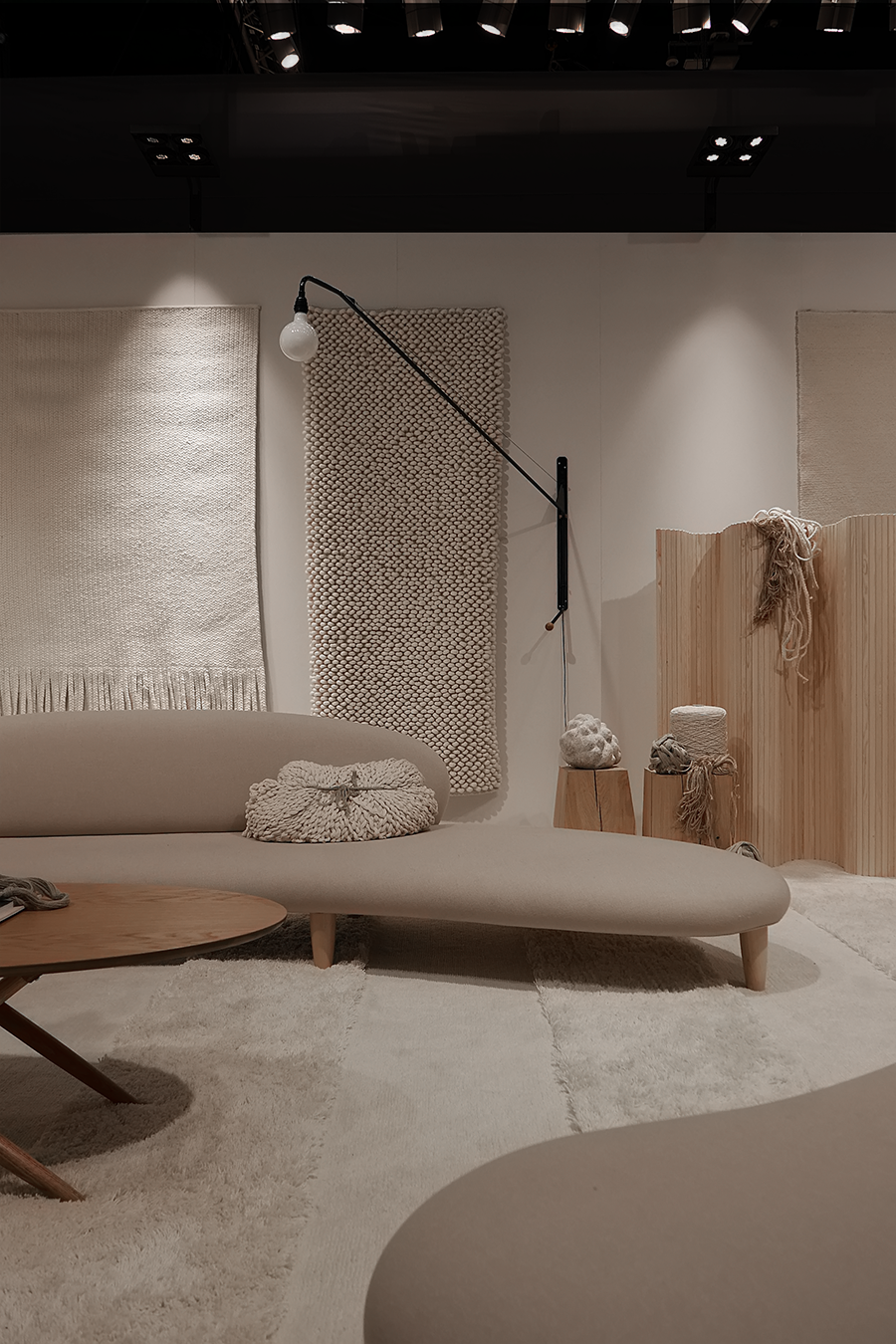