Last spring I had an amazing opportunity to visit Romania, a country which I had not yet been able to cross off my list, but more importantly, the country where my boyfriend comes from. We had previously traveled  to London and Paris together, but this trip was different. It was not just a holiday, it was where he was from; his country, language, heritage – and his family. So instead of worrying what to pack, I spent my days wondering whether his parents, grandma and the Labrador Retriever would like me. Priorities, you know?

Frankly, I didn’t know that much about Romania at all. I had no idea how much this country had to offer, especially as a travel destination. I did not have any real expectations either; I just wanted to learn about my boyfriend’s country. And in the end I realized that it was the best way to travel to Romania – to let myself be surprised and swept off my feet. To give you an idea about why you should add Romania to your bucket list, take a look at my first timer’s guide to Romania’s highlights!

We only spent only one and a half weeks in Romania, but that was enough to allow by my boyfriend to introduce me to some of the country’s highlights. We stuck to a route looping through central Romania, including stops in Bucharest, Petrosani, Sighisoara and some castles – Bran Castle and Peleş Castle.

Unfortunately, we only really experienced the airport and bus station of Cluj-Napoca – the city will have to wait for another trip. However, there is one thing I’d like to share about Cluj-Napoca, and that is the big music festival held there every August, .

A couple of tips if you’re interested in attending the festival: you can buy the early bird tickets as early as November-December. 340 lei (74€ or 89$) for 4 days, and they sell out fast. Pay attention to the dates when you can buy them and be ready to be flexible when paying (if the credit card doesn’t work, make a transfer). If you have the ticket, start looking for accommodation super early in advance. If you leave it to May-June, so a couple of months before the festival takes place, you end up with prices 200% higher than the usual, which makes it not that cheap at all – which was also one of the reasons we ended up not going.

At the foot of the Bucegi Mountains in beautiful town Sinaia lies a masterpiece of a castle, Peleş Castle. After King Michael I’s forced abdication in 1947, the castle became property of the communist government, but was returned to the Royal family later on. When we got there, it had been snowing for days, so the castle looked even more like it was something out of a fairytale!

Also known as Dracula’s Castle, nestled in the Carpathian mountains, Bran Castle lies in the heart of Transylvania. Count Dracula, a fictional character from Bram Stoker’s novel, was inspired by the best-known medieval ruler of the Romanian lands in Europe – Vlad the Impaler. Last year, Airbnb hosted a competition where the winners spent their Halloween night in red velvet coffins, marking the first time in 70 years anyone has ever spent the night in the gothic fortress.

The Turda salt mine, with over 2,000 years of history, is the largest salt mine museum in the world. More importantly though, it’s now a futuristic underground tourist attraction, located inside one of the oldest salt mines in the world. There’s an amphitheater, a bowling alley, an underground lake that can be explored with rowing boats, mini-golf, sport field, table tennis, pool tables, a ferris wheel, and last but not least, spa treatment rooms with natural aerosols. All of this is happening some 120 meters (394 feet) below the surface of the Earth. Just don’t get claustrophobic!

The origins of this picturesque city go back to the Roman times. It’s known for its medieval festival, held in July, where the public can enjoy theater performances, medieval music and dance, folk, street animations, craft workshops, a parade to open the festival, and a masquerade ball at the end of it. Designated a World Heritage Site by UNESCO, this gem of a city is also the birthplace of Vlad the Impaler (mentioned above with Bran Castle).

Our stay in the city felt like traveling back in time: we were staying right in the middle of the citadel, waking up to church bells. You can find the Airbnb link for the room in Sighisoara . Warmly recommended!

Out of all the possible touristic activities in Bucharest, one place you should really visit is the Palace of the Parliament. We couldn’t get spots to the English tour, so we took part in the Romanian one, where most of the people were part of a group with their own guide who translated Romanian into German, and then my boyfriend translated it into English for me. Very international. However the translations work out for you, you’ll definitely learn a lot; about the building itself, like the costs of its maintenance (un-freaking-believable amounts, while many people barely making ends meet – where is justice, I sometimes wonder), and some bits and pieces about Romania’s history. Having the palace there was a part of a reconstruction plan of Bucharest after the earthquake of 1977; Project Bucharest was intended to be the replica of Pyongyang, the North Korean capital. As said, several discoveries might leave you speechless. The visit is definitely worth your time, money, and effort. In Bucharest we used Airbnb fo accommodation, and this time we got lucky with this great apartment .

Good to know before you go

Don’t forget the value of money. It depends of course on where you arrive from, but the prices are a lot cheaper than in many other countries. It can make you careless, so keep an eye on your spendings.

Talking about money – have it with you. Physically. Romanians are not big on paying by card. Even at Peleş when buying the entry tickets, although my Estonian debit card gave a reduction, ironically, it couldn’t be used for payment. If you don’t want to end up in an unfortunate situation, have enough cash with you.

There are many stray dogs – way too many if you ask me, and too close to the roads. When driving, it is something to pay attention to.

It is definitely easier to have a local with you who speaks the language. It’s a bit like France – you can’t really expect them to be able to communicate in perfect English with you, and in the countryside it might get difficult.

Romania could do a much better job in self-promotion. For example, at Bran Castle, we had already bought our tickets and waited for the tour to start, when we found out about the audio guides – they weren’t advertised… A lot of the tourism doesn’t run smoothly yet, so it’s always good to ask about options and alternatives.

When I think of my time in Romania I feel wonder and the urge to discover more. I hope that one day soon enough, I can go back and see what else is out there. My first trip to Romania was way too short and I still have a lot to see, discover, and learn.

Did you find our first timer’s guide to Romania useful? 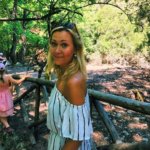 From Estonia to France to Belgium, Melani’s life has finally brought her to Switzerland where she’s been living for the past two years. Still looking for her real purpose in this life, she has a keen interest in mindfulness, psychology, and the powers of the Universe. She loves nature, reading, writing, going to the gym, and sauna. She believes in love, starting with the love for yourself. And when life gets tough, she finds solace in breathing. You can find her on Instagram .