10 things I learned when I solo cycled around New Zealand


When I graduated from university in August 2015, I didn’t know what I wanted to do as a career. What I did know was that I needed to escape. That I needed to travel far, far away from the chaotic streets of London, where I had been living for the past four years, to somewhere wild and exotic, mountainous and rugged. I chose New Zealand, because it was my mum’s favourite place when her and my dad traveled around the world 25 years ago. And I decided to load two panniers and cycle around it. Alone.

I spent four months cycling from the very tip of the North Island as far as Queenstown on the South Island. Undoubtedly, I learned a lot of lessons along the way; about being a girl traveling alone, dealing with loneliness, accepting kindness and making the most of the experience.

Here are the ten most important things I learned, lessons I take with me into my life now.

1. Never let anyone tell you that you can’t do something

You come across a lot of hurdles as a solo female traveler, and even more so when you’re doing something as wild as cycle-touring around a country. A lot of people questioned why I was doing it; many were impressed, some were intrigued, others bemused. On my first day in New Zealand, a bike mechanic told me that I shouldn’t cycle on Waiheke Island, as I had planned. He looked at me and judged based on my gender and appearance, and planted a seed of doubt in my mind that I couldn’t. But I knew that I could, and I did. If you believe that you can, don’t let anyone tell you that you can’t.

It’s all too tempting to choose the easy option, especially when you’re tired and fed up. I was faced with a lot of decisions as to whether to take the longer, hillier route with amazing views, or take the main, busy highway that would be much faster and easier, but boring. My advice: always take the scenic route, you won’t regret it!

When you’re cycling alone every day and staying in campsites, it can be hard to meet people of a similar age and who can relate to your way of thinking. I was lonely, and I didn’t want to admit to it because I was supposed to be having an amazing time traveling. When I did admit to it, it made it a lot easier to accept and combat. I found myself having long conversations with shop workers and campground hosts, and I talked to my friends and family at home as much as I could. Being lonely is natural for any solo traveler; it gets easier with time.

When I was cycling one day, a woman pulled over her car and offered me a bed to sleep in for the night at her home a few miles down the road. She drove away leaving the option there for me to decide. I chose to go, and was treated to a wonderful, home-cooked dinner and a cosy bed – a welcome break from my tent and sleeping bag. Of course, you should gauge the situation at the time, but don’t be afraid to accept kindness from strangers. It may just restore your faith in humanity!

5. Choose the most secluded camp spot, even if you’re afraid

I camped alone for a total of four months, but I still get nervous and often pick a camp-spot near to a friendly looking family or an old couple. But the best campsites are the most secluded ones… I had to be brave to choose the scenic camp spots, away from other people, making myself more vulnerable. Sometimes it made for a restless night’s sleep, but it’s good to step out of your comfort zone.

6. Do the hike, wild swim, watch the sunrise

After spending five or six hours every day cycling from one location to another, I would arrive at a campsite for the night and often just want to lie down and relax. And of course, you deserve it! But when there are places to explore or an awesome hike nearby, you should do it. Remember, you might never go to that place again. Wake up to watch the sunrise or wild swim in the ocean at dusk. These are the moments you won’t forget.

7. Accept defeat and ask for help

Sometimes things get hard. Maybe you find yourself lost on a hike, your tent collapses in the night, your car breaks down. Maybe it’s your emotions getting the better of you. For me, I was cycling over a mountain pass in a storm when I realised it would be unsafe to continue. It was a hard decision, but I had to accept defeat and ask for help. I ended up spending the afternoon by a fire in a cosy pub, treated to a hearty meal and good conversation from the locals.

Later, I was driven the remainder of the journey to the top of the pass by a kind waiter who even pulled over to let me take a photo of the view. I may not have cycled it as I had wanted, but I made the right decision at the time and didn’t put myself at risk.

8. Having dinner alone can be liberating

There’s some kind of taboo about having dinner alone. I have coffee alone regularly, lunch alone is fine, but going to a restaurant and asking for a table for one? For some reason it takes more courage, especially for a woman. People may stare out of curiosity, but the truth is it’s liberating! You’re strong and independent, so yes you’ll order a glass of wine and eat a dish of risotto at that little restaurant down by the seafront you’d seen.

One of the best things about traveling alone is having time to do all the creative things you enjoy, but never get a chance to pursue. Like reading, drawing, writing, playing music – whatever it may be. When I traveled, I read book after book and wrote journals to look back on. Another important thing is to listen and observe.

Even if you’re not actively involved in a scene or conversation, being observant and curious opens your eyes and ears to the world and makes you a wiser person.

The most important lesson I learned – and probably the most cliche – don’t regret a thing. Say yes to things you normally wouldn’t, stay up talking until midnight with friends you just met, give your heart away if it feels right, cry when you need to, smile even though no one’s around.

Traveling alone really did change me. I came back with more of an idea of who I was and what I wanted in life. I came back much more confident and self-assured. I came back knowing I’d travel alone again, but also that I wanted to travel with someone else as well.

I take these lessons I learned when I cycled around New Zealand into my life now. I try to live with no regrets, I still eat dinner alone sometimes, I get up to watch the sunrise, I accept defeat when I need to and I always take the scenic route! 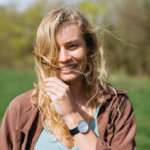 Athena Mellor is a writer, linguist and co-founder of ROAM Magazine. Her passion for travel lies in that which keeps you on the move – hiking, cycle-touring, road-tripping. After graduating from University College London with a degree in Modern Languages, Athena decided to spend four months solo cycle-touring around parts of the USA and New Zealand, before returning to the USA to explore more of California, Oregon and Washington. Now she roams around the UK, hiking, camping and gaining inspiration for writing from the freedom of the wild. She shoots on a Pentax MX 35mm film camera and is constantly trying to learn new languages on her travels, also working as a freelance translator. Athena is based in Manchester, England.