Apartment Verve is a monochromatic in a small town in the Brescia area of Italy called Bovezzo, designed by . 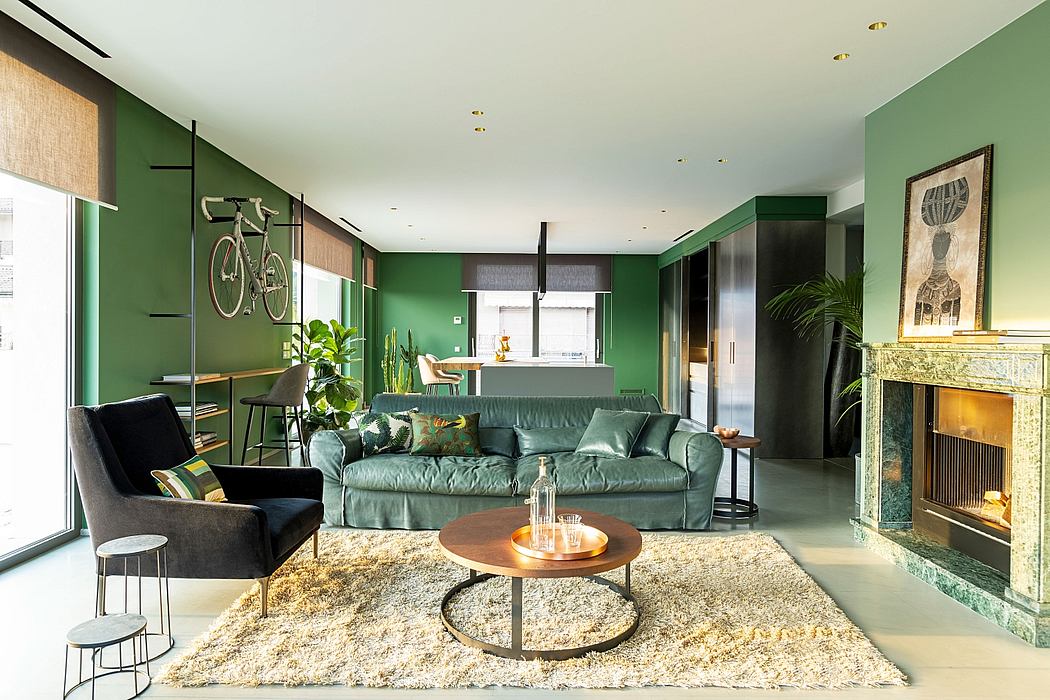 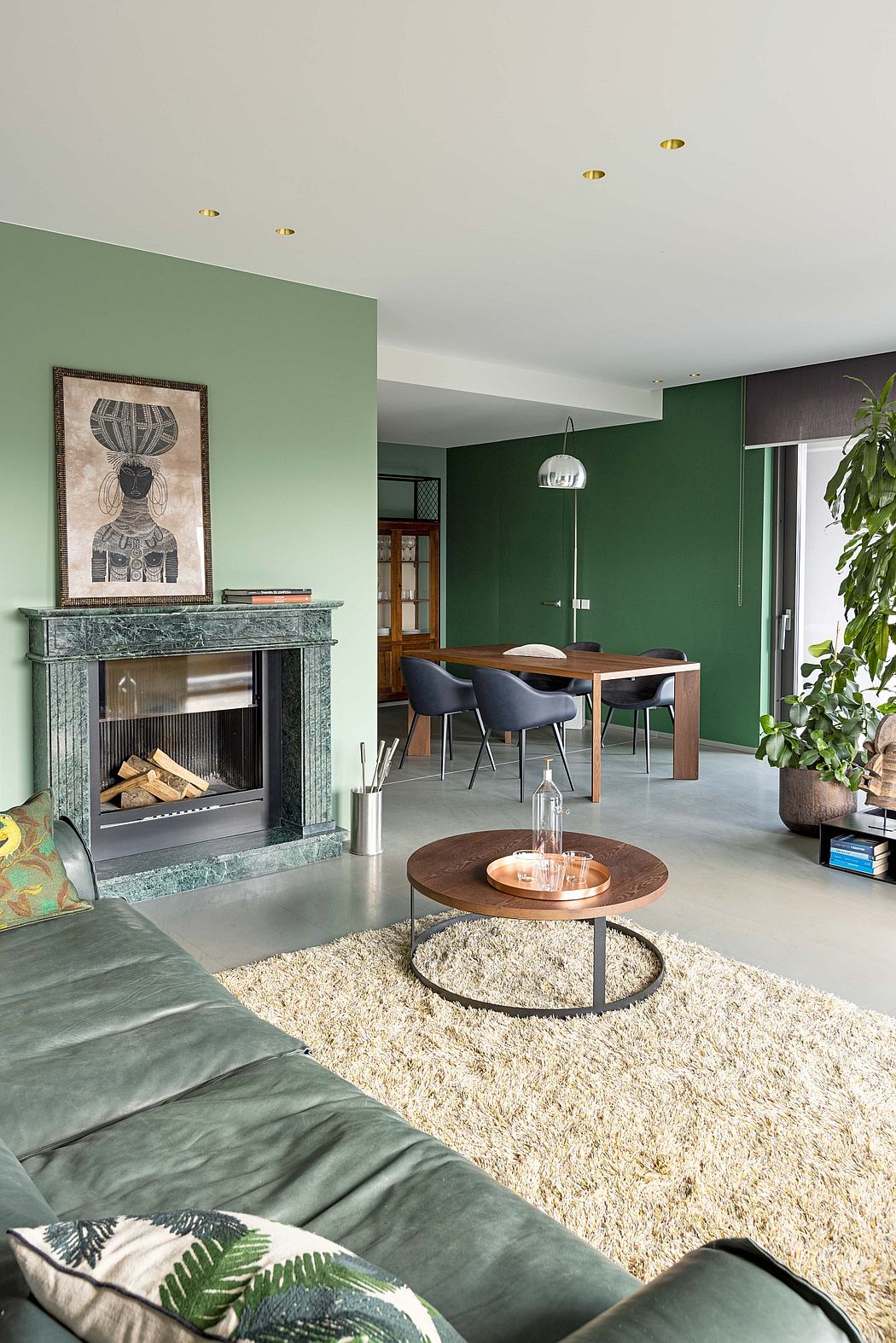 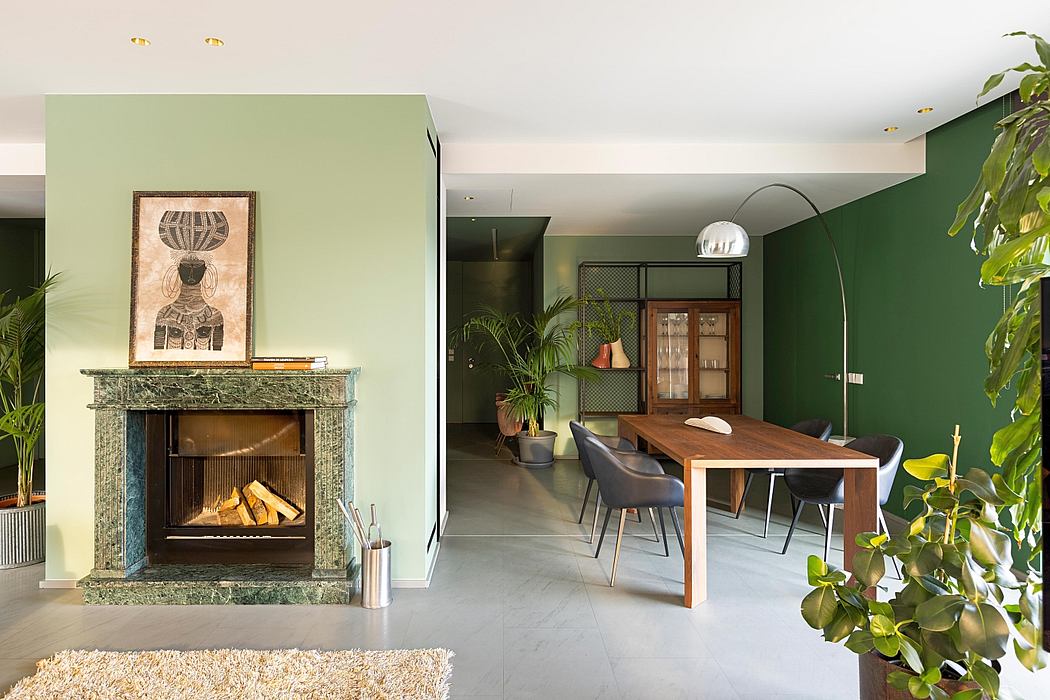 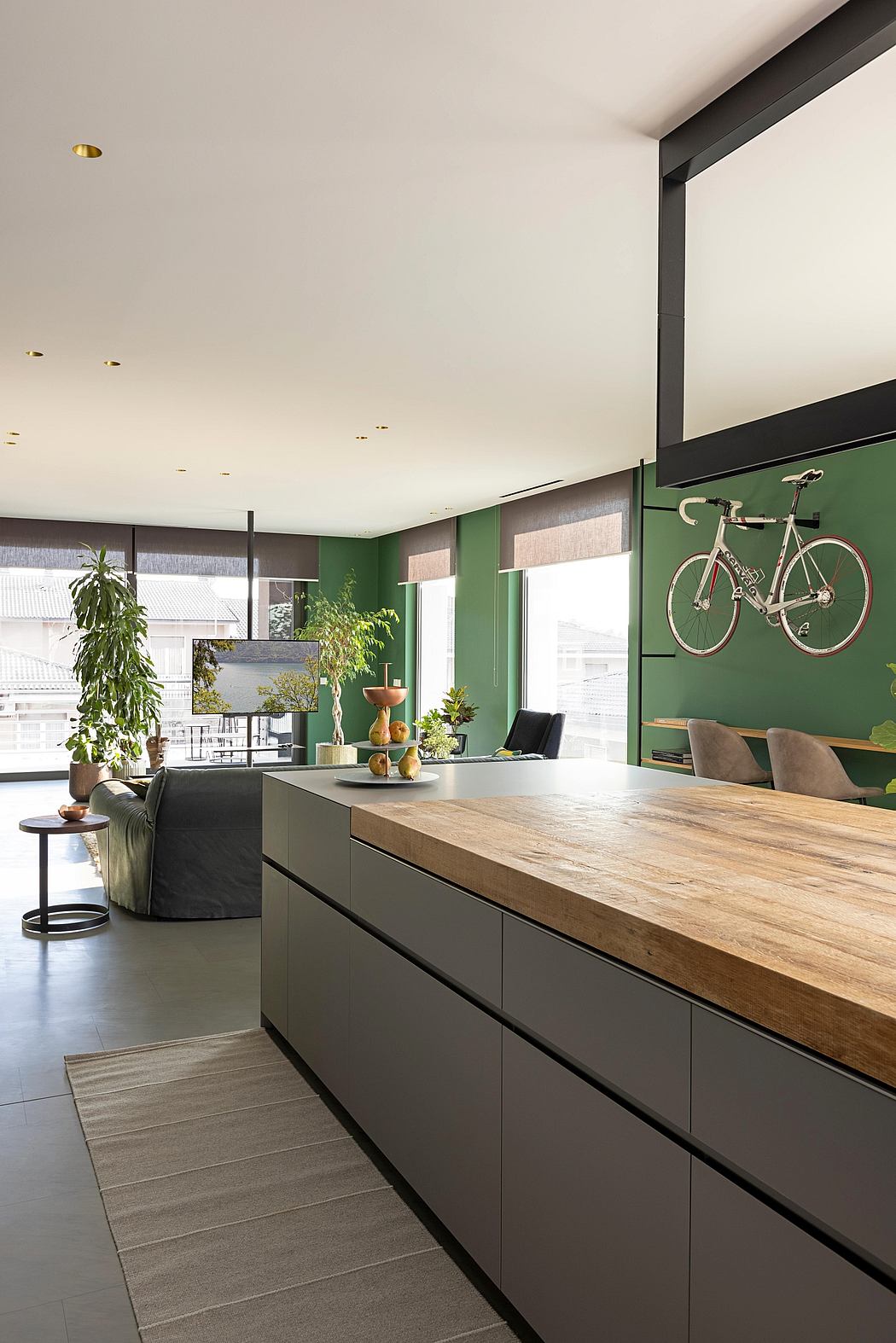 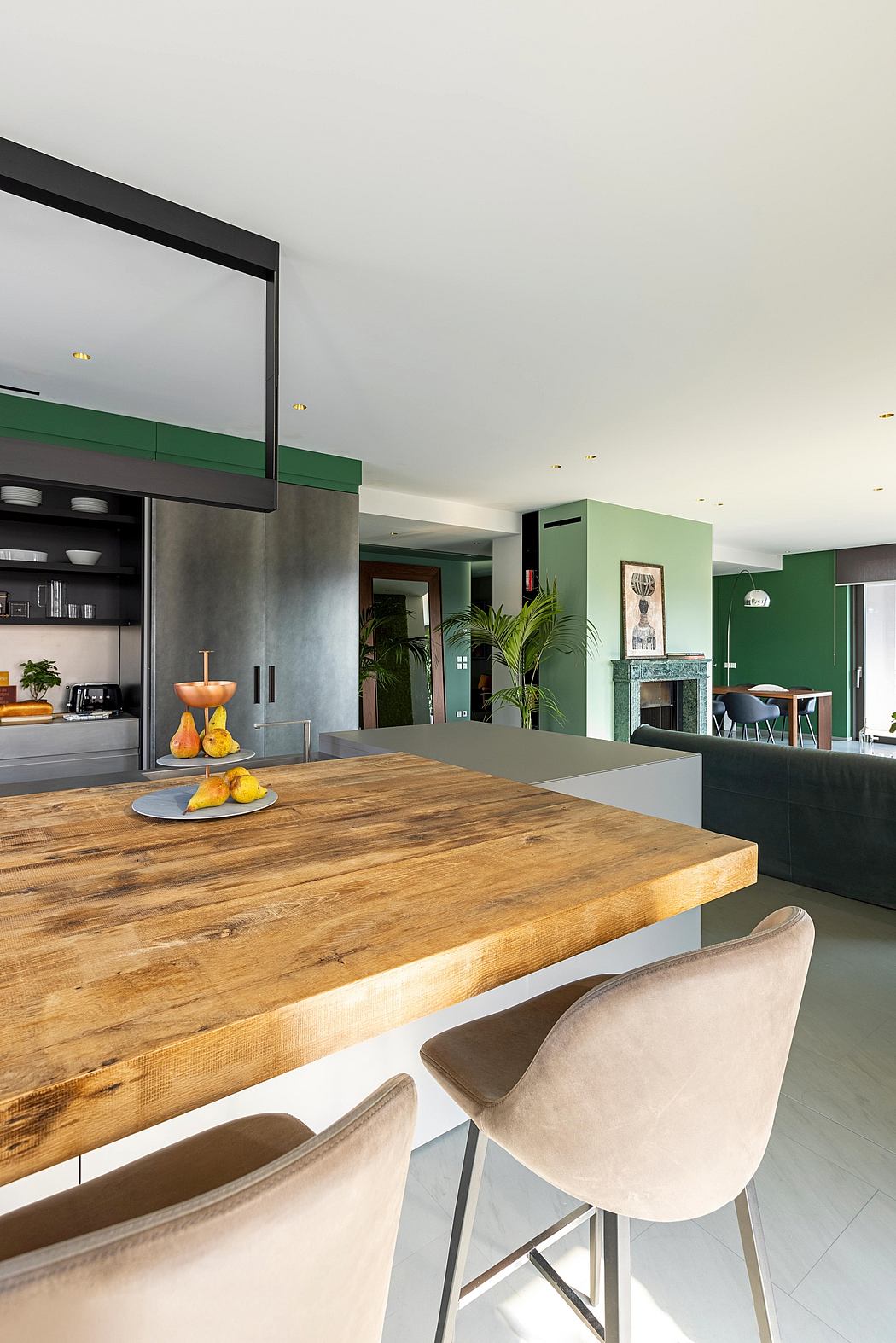 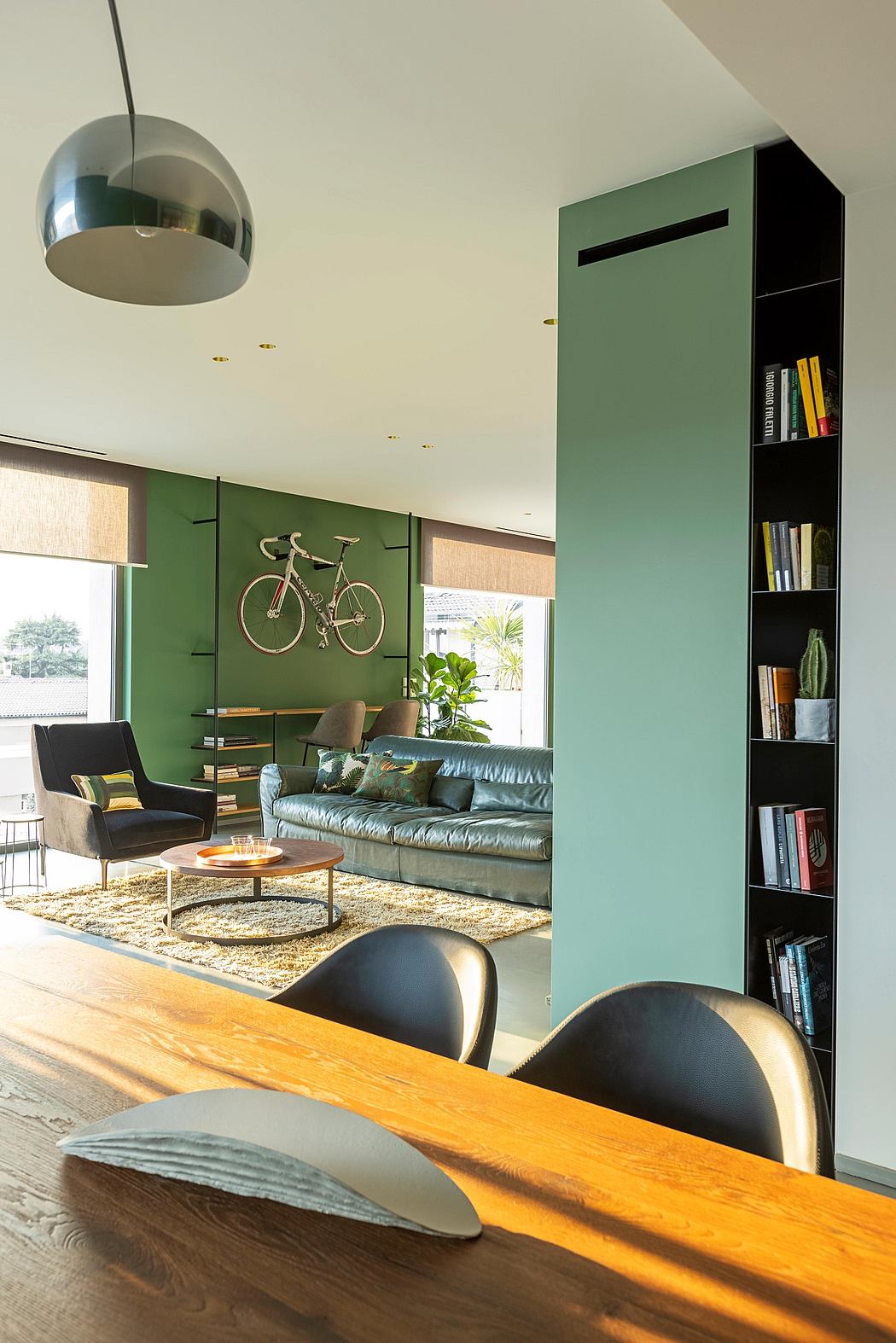 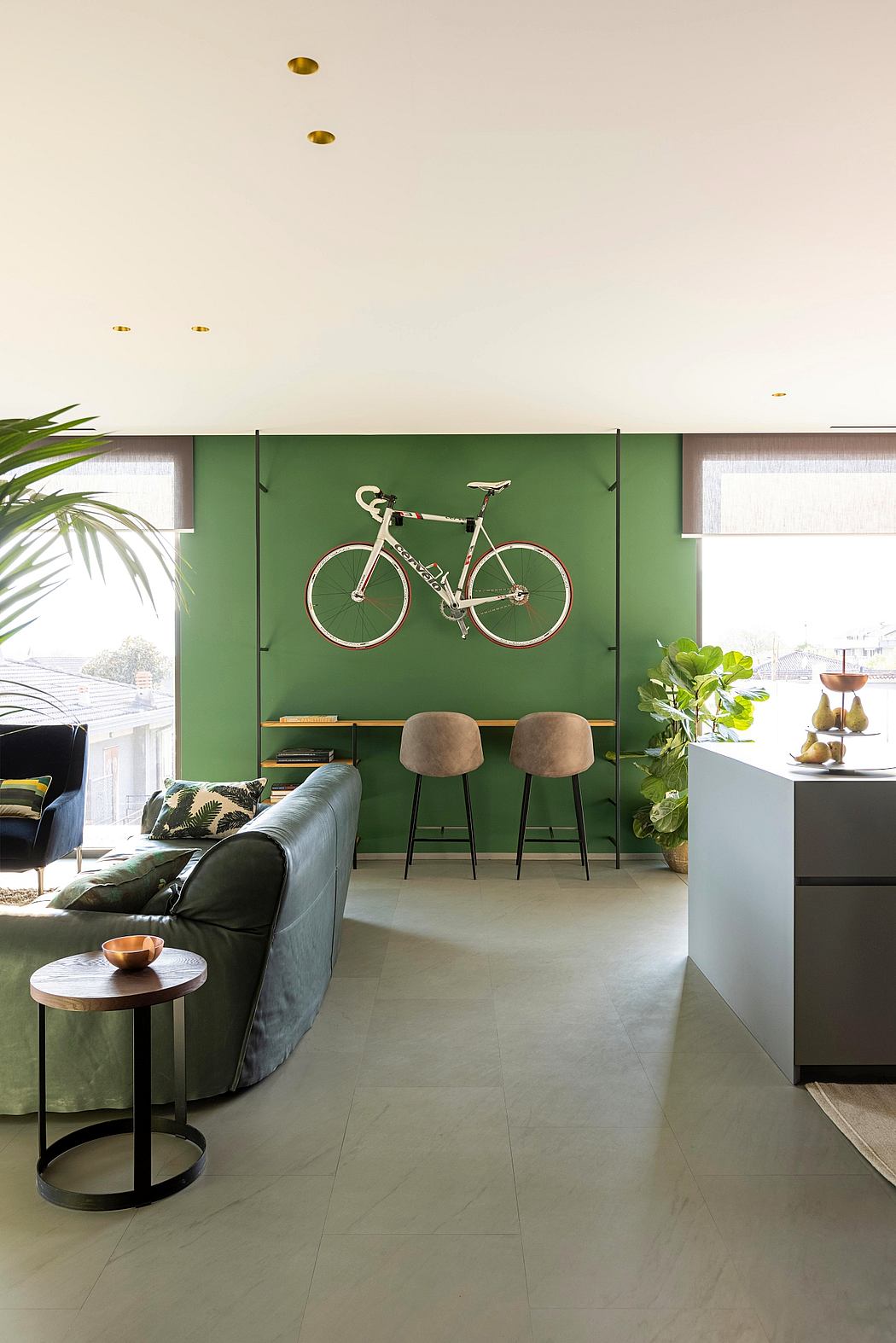 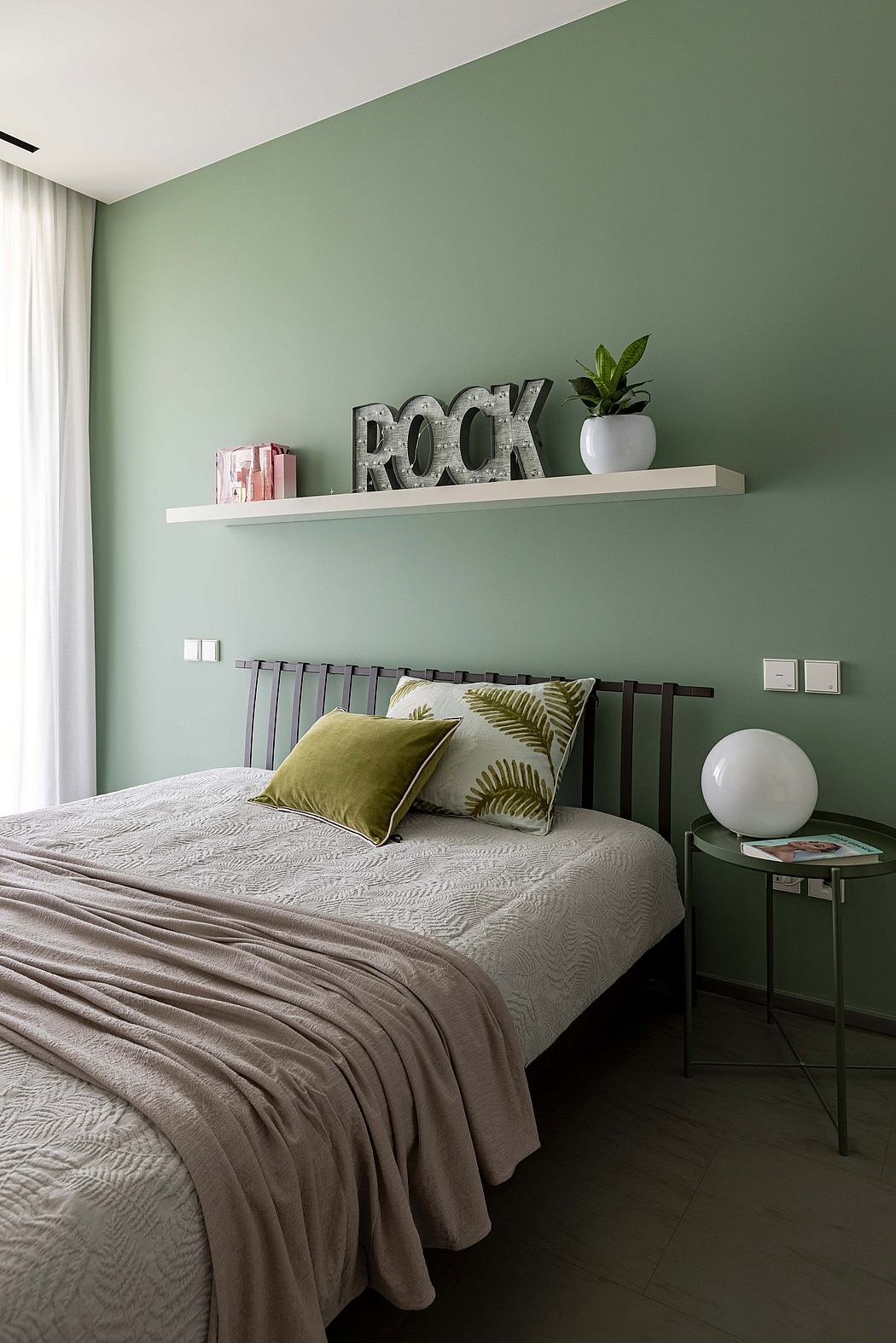 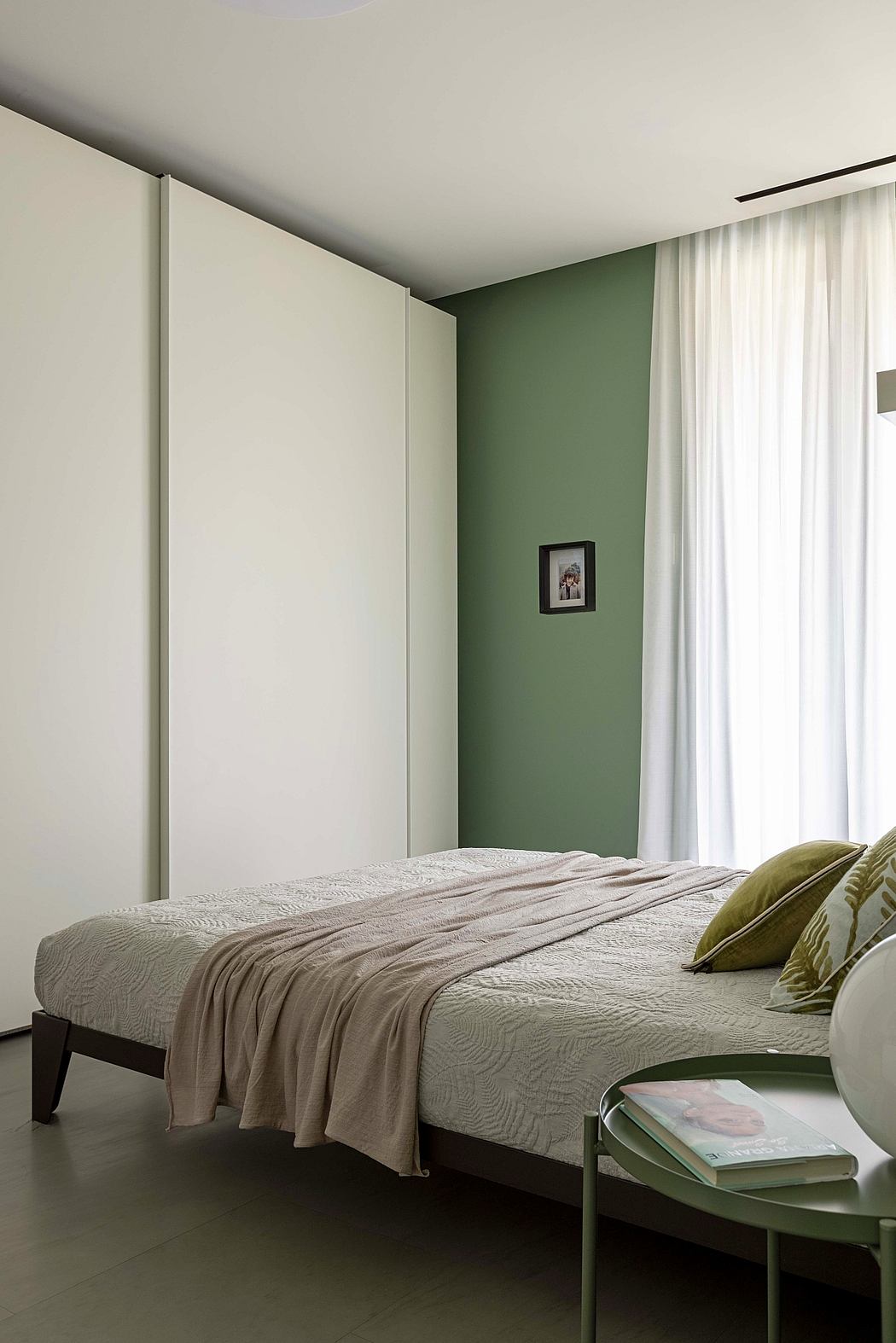 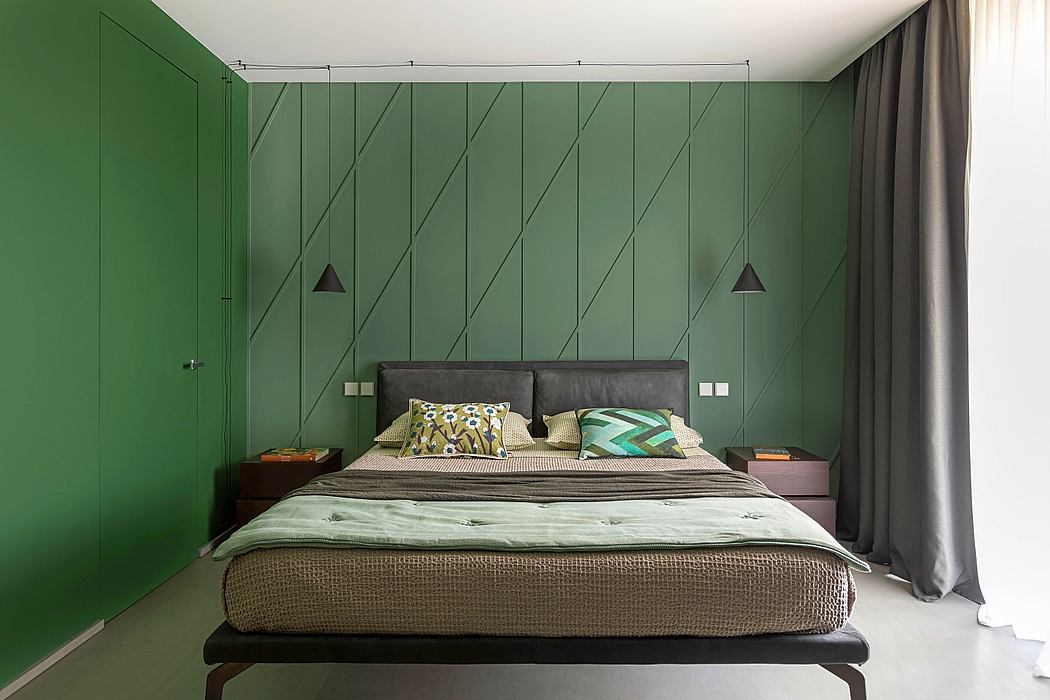 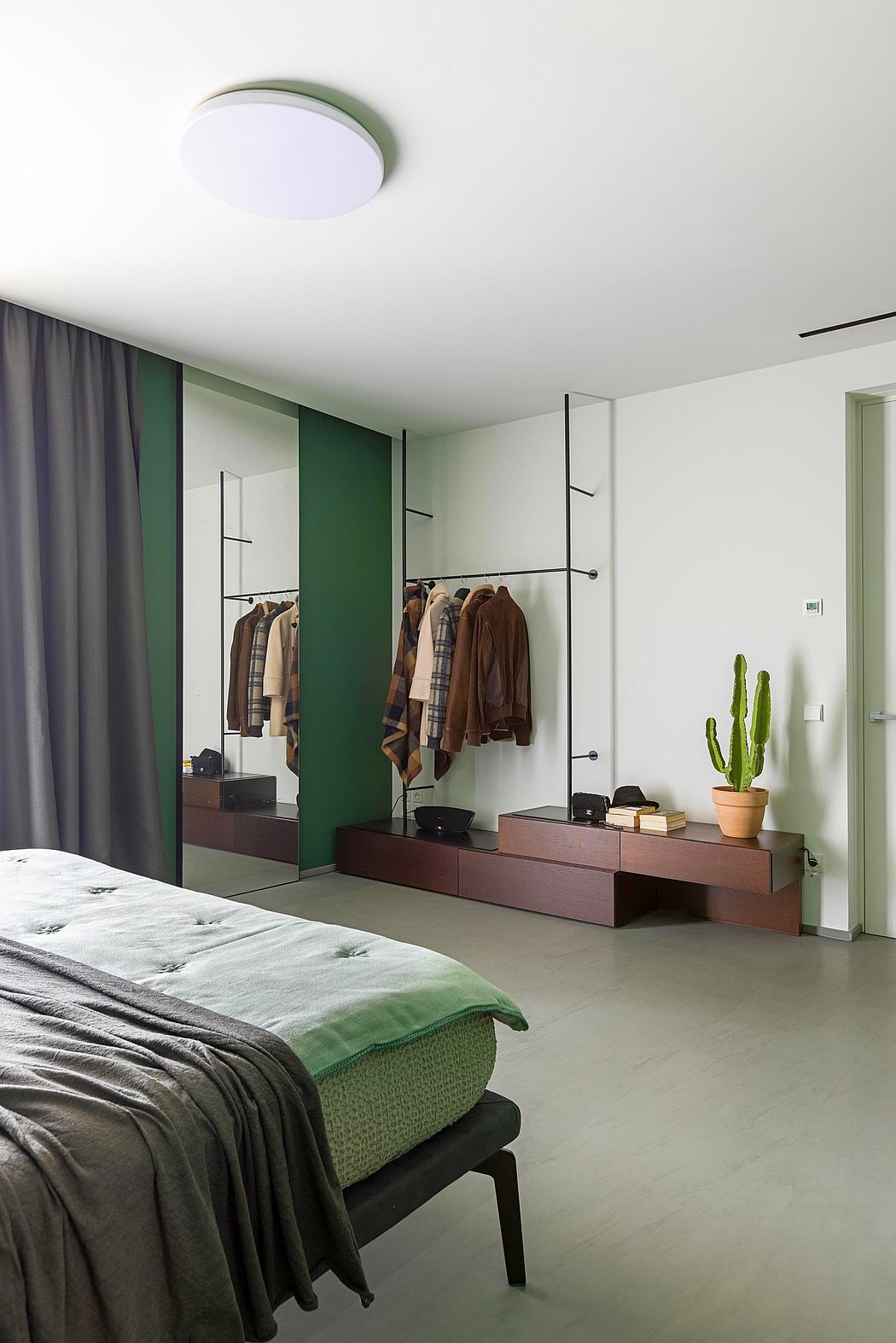 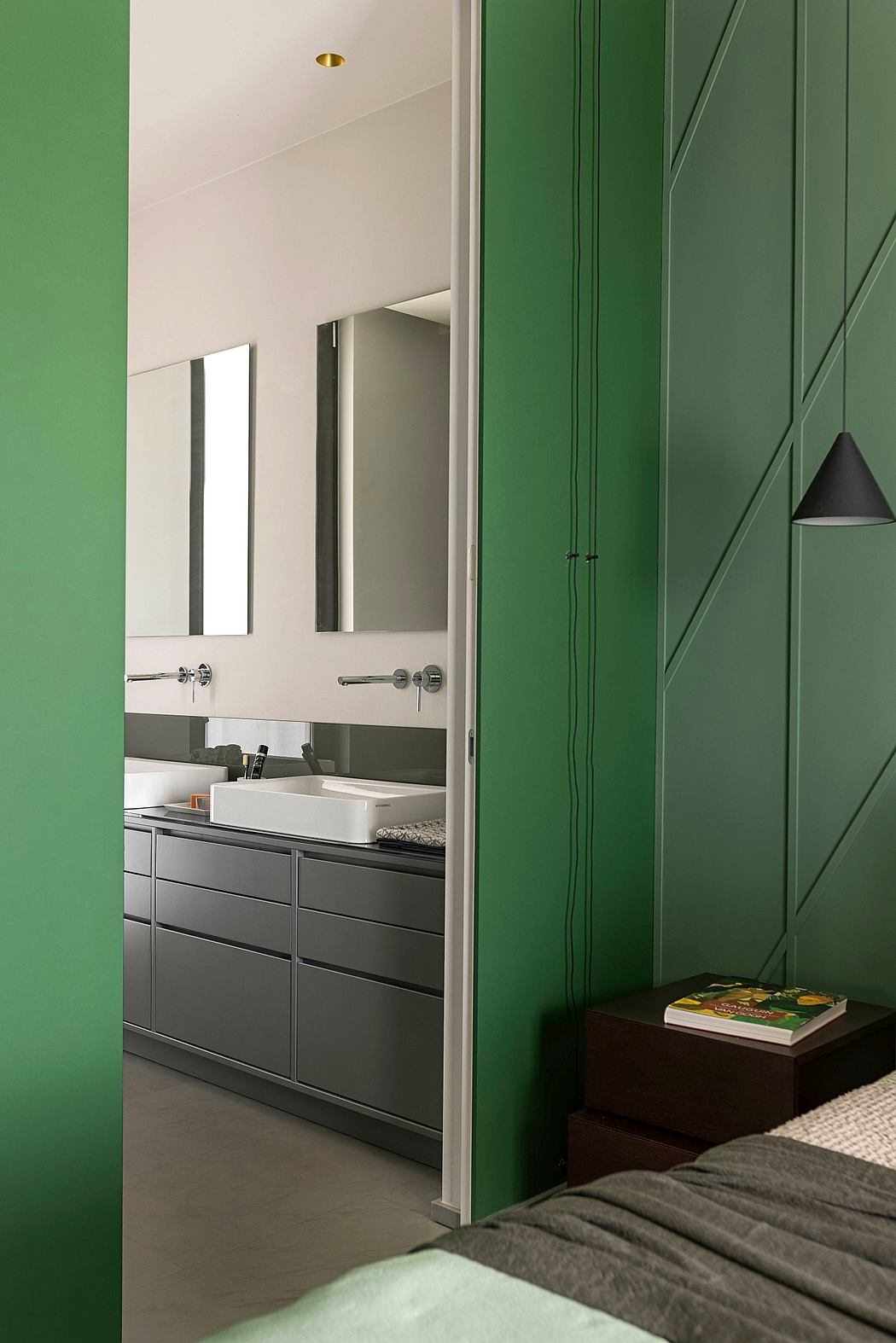 A chromatic thread that outlines the aesthetic of the , but also a consistent choice of environmental sustainability for a total green spirit.

VERVE was realized inside a recently built three-stages building in a small town in the Brescia area. The client is a young man owning and living on the second floor. He sees his personality, sporting passion, and love for nature reflected in the realization of the work. The taste that characterizes the interiors is dissolved in the eclectic decorative detail, where green, present with its various declinations, is the undisputed protagonist. However, the chromatic choice of materials and finishes also has a symbolic value, since the house is designed according to the criteria of the green-philosophies about energy saving and eco-compatibility.

Immediately after the entrance, a central volume can be noticed. Around it, the path between the space just crossed and the next one, the living room, winds. This central volume, in addition to being a multitasking and dividing item, has a decorative themed element: a wing covered with a vegetal carpet of stabilizing lichens (Moss) that camouflage a technical trap door and represent the spirit of the project itself.

The open space, capable of integrating a plurality of functions without any interruption, occupies about half the surface of the interiors. Here is the cooking area, which is divided between the “retractable” composition along the wall and the multifunctional central island, the sofa area, and the dining area.

The Housse Baxter sofa, realized rigorously in green leather, is the center of this portion of the house dedicated to relaxation (in an environment that is totally integrated into tones and shapes). The hearth is closed with a traditional marble frame on one side, and a custom-made wall console on the other. The tubular structure of the latter frames and integrates the bicycle support into the environment which, being a sports tool, also becomes a valid element of personality and has a great impact on the furniture.

The ambiance is completed by the dining area in which, in addition to the large wooden table surmounted by the historic “Arco of Flos”, a traditional family piece of furniture has been inserted, modernized thanks to a custom-made iron frame.
Also equipped with an independent entrance (which connects directly with the ledge), the sleeping area consists of two single bedrooms – in addition to a double bedroom – and two bathrooms. The chromatic leitmotif already appreciated in the living area reaffirms itself here too, but with a variation in intensity. The bright green fades into sage shades, favoring rest.

The master bedroom is equipped with an independent walk-in closet, closed by the flush door, and a master bathroom dedicated to exclusive usage. The different uses are identified by the alternation of white and green, connected by the warm gray of the rectified slabs belonging to the natural stone flooring.

In VERVE, color, which covers the general theme of the whole project, has two different functions: the aesthetic and the symbolic one. If, on one hand, the chromatic thread gives to all rooms a uniforming and characterizing tone, on the other hand, it effectively transmits the personality and attention to the environmental theme beloved by the client.