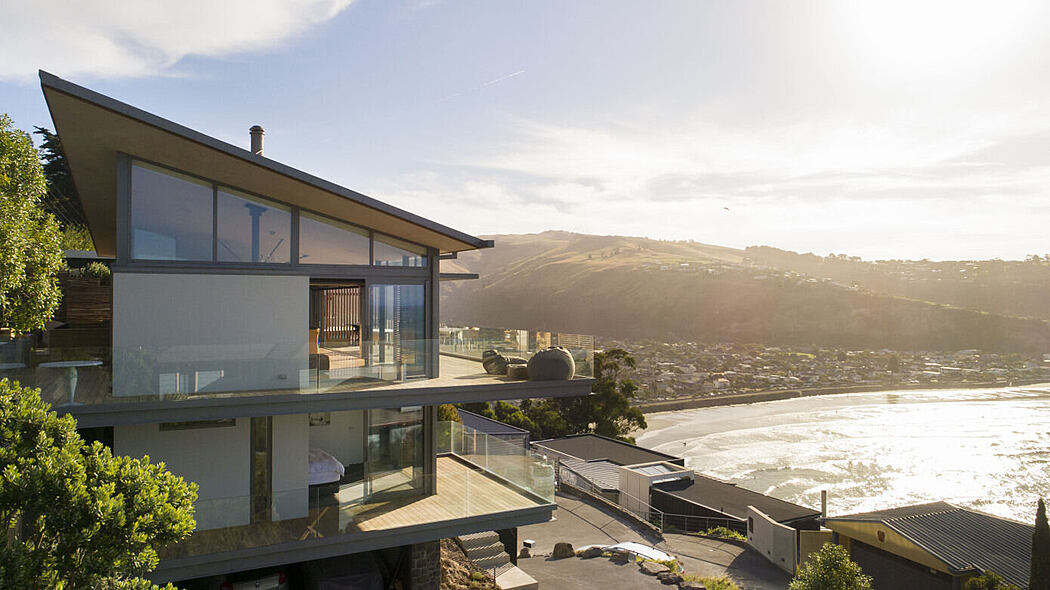 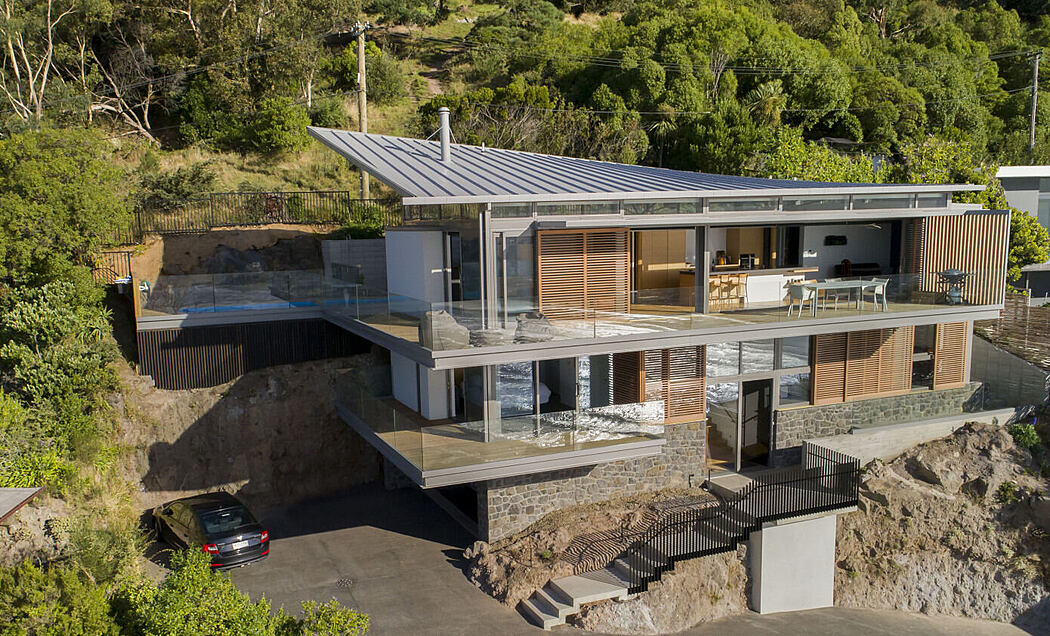 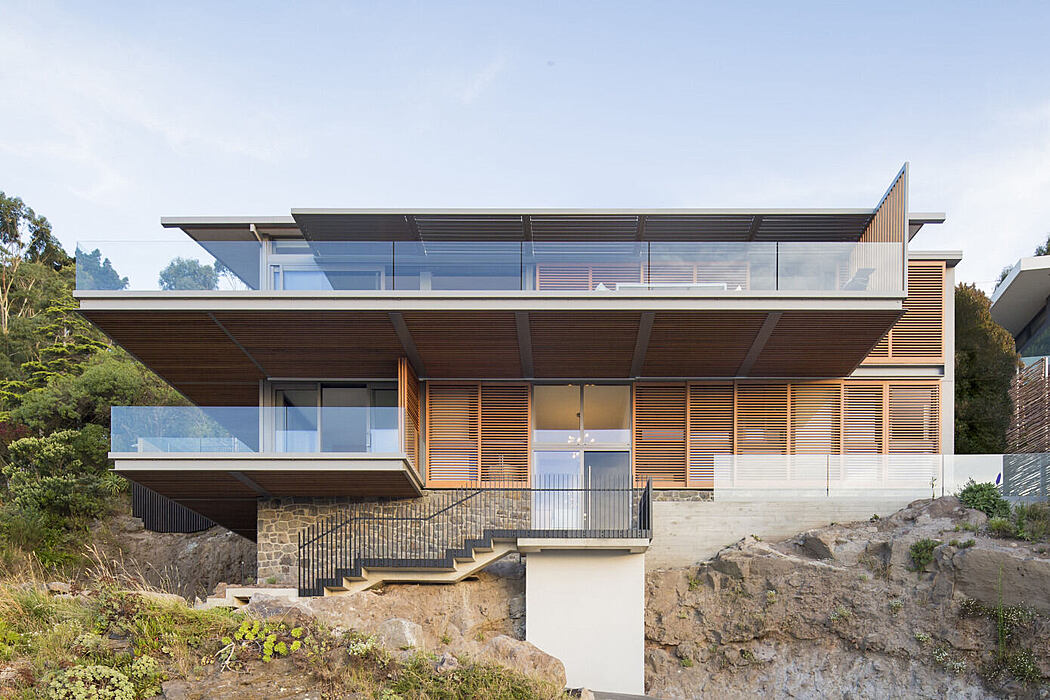 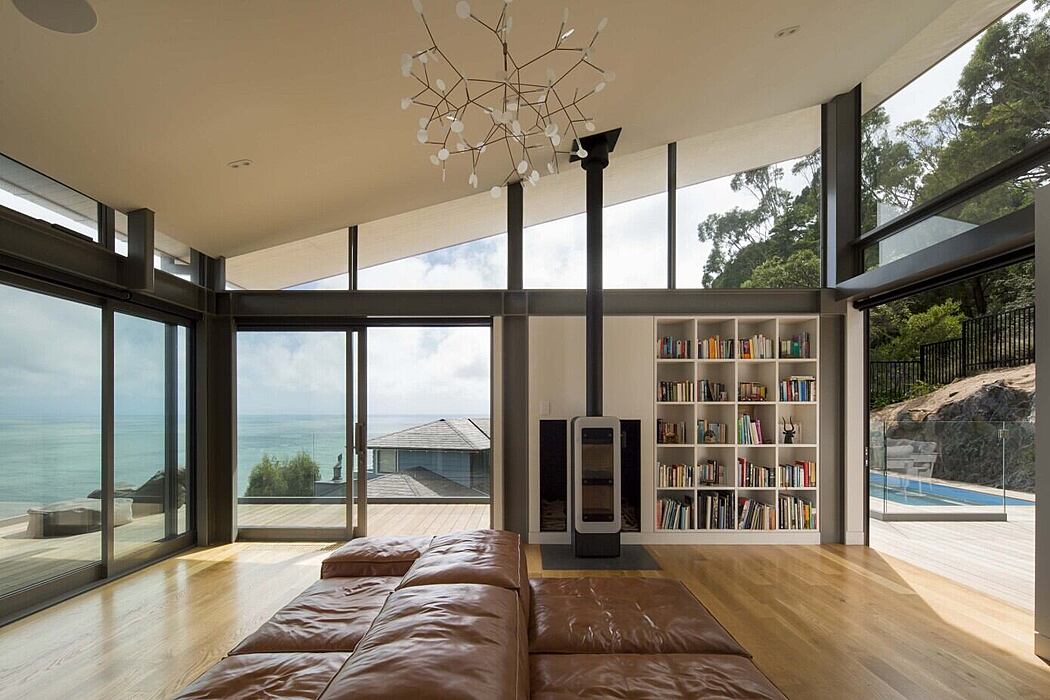 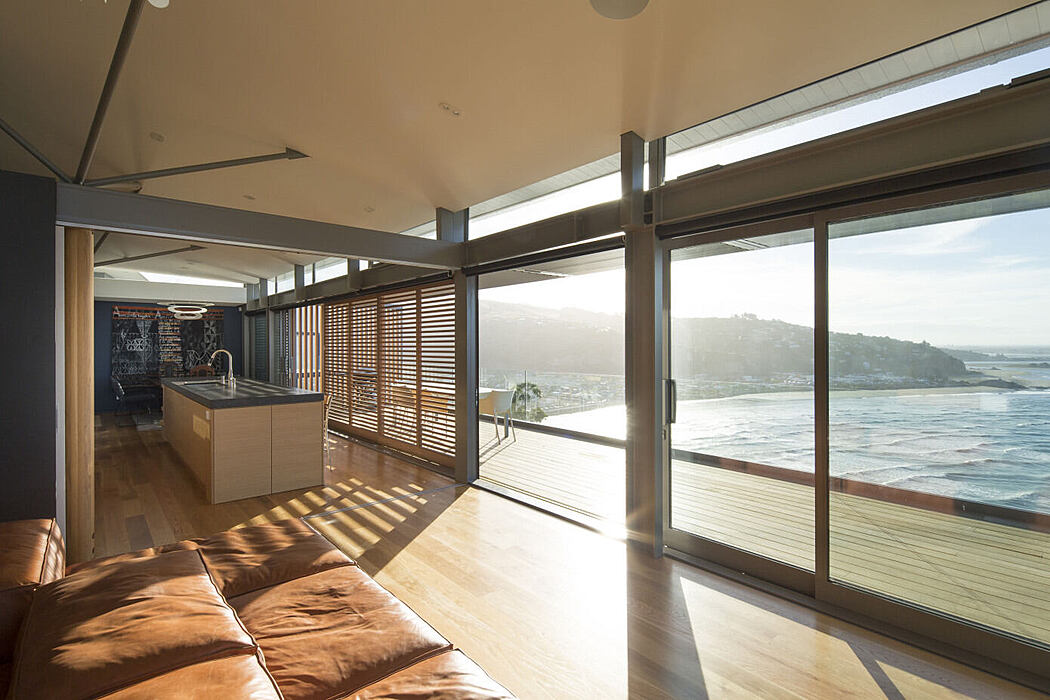 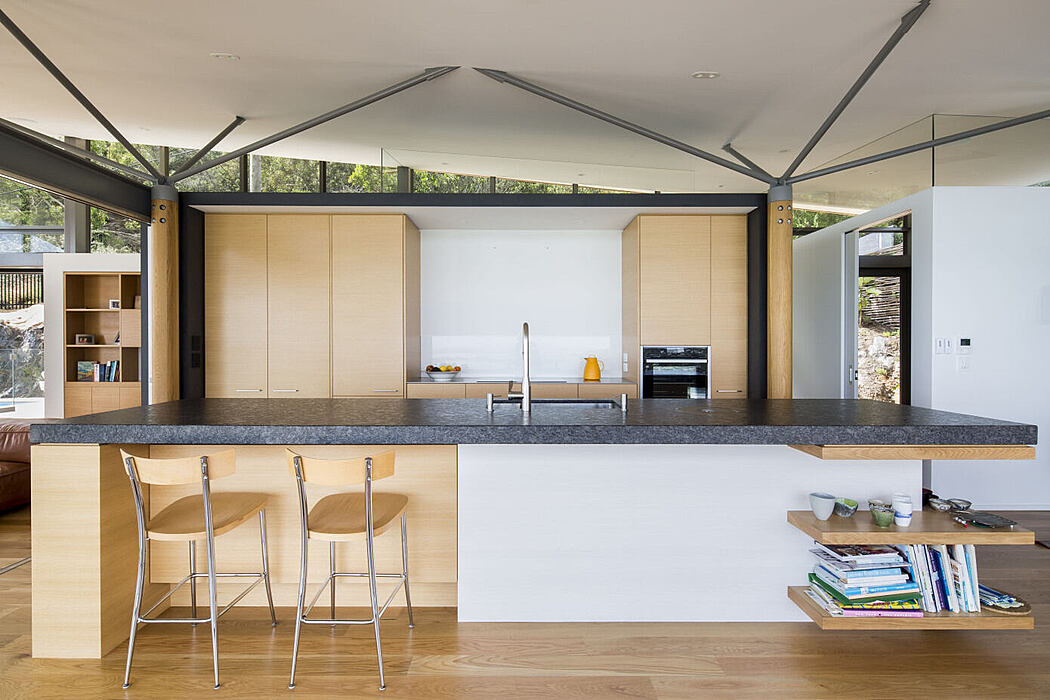 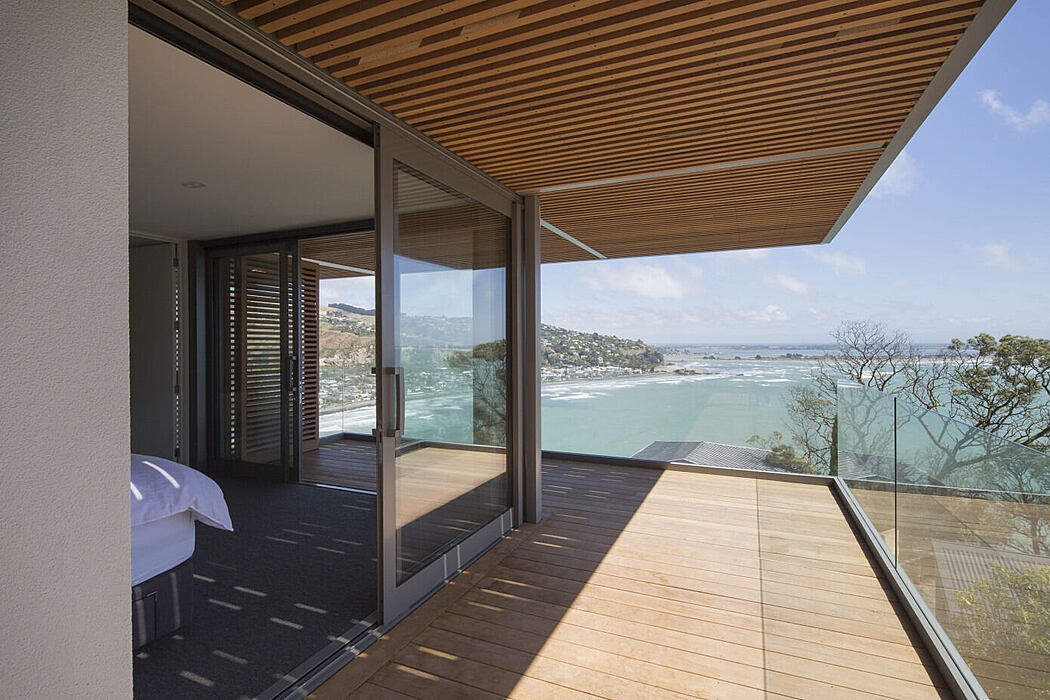 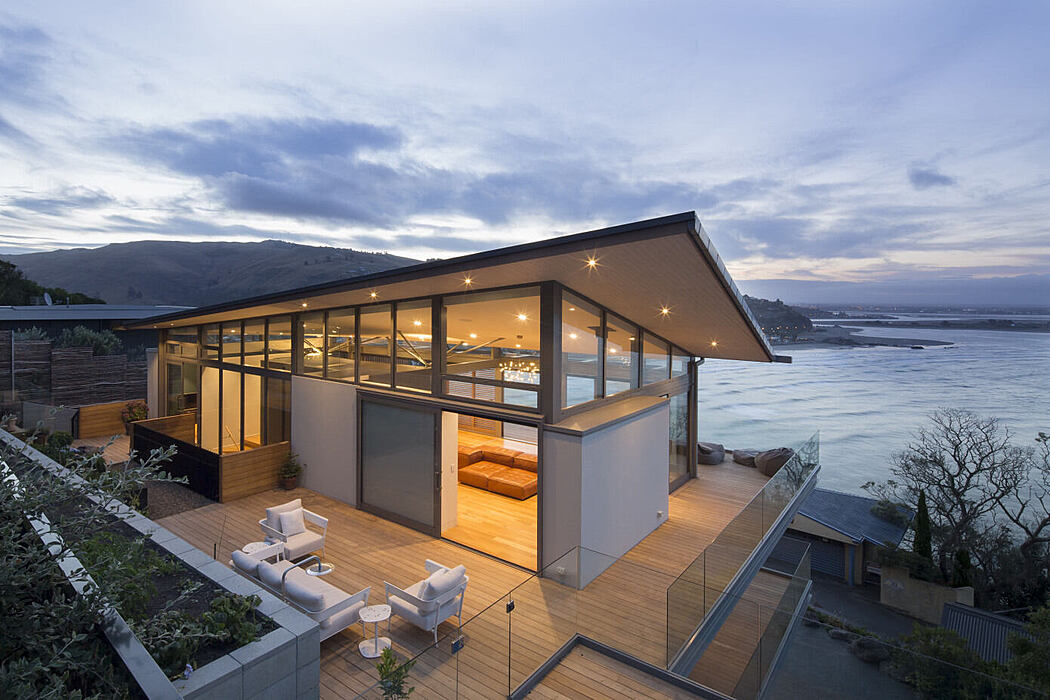 The combination of a challenging cliff-edge location and extremely difficult logistical challenges meant that the Red Rock House project on Scarborough Hill in Canterbury was an exercise in tenacity for both client and architect. The small 400m2 plot (a third of which is the access road) is situated on a cliff face on a private access road, which is carved out of red volcanic rock and rises above the coastline.

If the site was not already challenging enough to transport materials to the site, the road closure (caused by damage from the Canterbury earthquakes) has forced the narrowing of the already narrow access road.

“This made the project very complicated because we couldn’t transport any large loads to the site, so they had to be transported by small lorries, vans or trailers,” says Wulf Borrmeister of Borrmeister Architects.

In addition, the access road was closed for repairs between 9am and 4.30pm for three months during construction. In short, the project could not have been more logistically challenging.

Fortunately, the brief for the house was simple: the clients had sold their earthquake-damaged house in Sumner village and wanted to downsize to a house that was relaxed, captured the sea views and felt like a holiday home.

In addition, they had some green ambitions: the design was to include solar panels, water retention tanks, ceiling blinds and a very low-emission wood burner.
In keeping with their goals of self-sufficiency, Wulf sought to keep materials as sustainable as possible, including the use of a significant amount of locally quarried stone for the exterior cladding at basement level.

Due to the steep nature of the site, the house was designed on three levels: the basement contains the garage and storage; the ground level has bedrooms and a sauna (which was recycled from their previous house); and the upper level consists of an open kitchen, dining room, living room, laundry room, snug, and a small study nook.

“The original idea was to have the living room, dining room and kitchen on the ground floor, but it was decided that because of the views it would be more convenient to swap the living room and bedrooms.”
Uninterrupted views from the top floor north and down to the south (which arches the roofline of the neighbour) include the ocean, the beach and Port Hills. All-day sun hits the living spaces, but Wulf said it was critical to control solar gains during the day.

That’s why the lightweight, warped roof – resembling a sail on a mast – follows the sun’s path, allowing the living spaces to capture morning light as early as possible while controlling the amount of solar gain in the afternoon.

This shape also captures views up the hill to the community reserve behind the house. “The roof curves out to give you a clear view of the trees on one side while you sit, while maintaining a view down to the beach on the other side.”

While the upper floors were designed to capture the views and sun, cedar sliding screens and automatic top louvers were placed to regulate the sun and to provide natural cross ventilation without losing the connection between indoors and out.

The path from the entrance to the upper floor then leads to the red volcanic rock of the cliff via a glazed, partially vaulted wooden staircase. “You almost feel like you’re walking outside,” says Wulf.

The internal connection to the outdoors is further enhanced by interior columns resembling trees that support a deformed roof structure with trusses resembling branches.

Other interior finishes reflect the client’s ecological requirements: the concrete floor serves as a heat sink for passive solar gains, and the textured walls and natural cladding are tactile and organic.

Since moving in, the clients have purchased an electric car and use solar panels on the roof.

Now, having completed the road repairs, as they return from Christchurch to their ‘holiday home’, they can already appreciate their house from afar, safely carved into the rock and glowing against the red volcanic rock of Scarborough Hill.