Located in Binjiang, Hangzhou, China, the Pig House is a unique house-design studio designed by Li Wenqiang of Pig Studio in 2022. It is a fusion of art and architecture, incorporating an artistic design style to create a one-of-a-kind space.

The house boasts an outdoor courtyard with an undulating topography, a “Furry House” private office, and a sunken meeting space. The design is inspired by the area’s special connection to nature, and its proximity to the iconic West Lake. 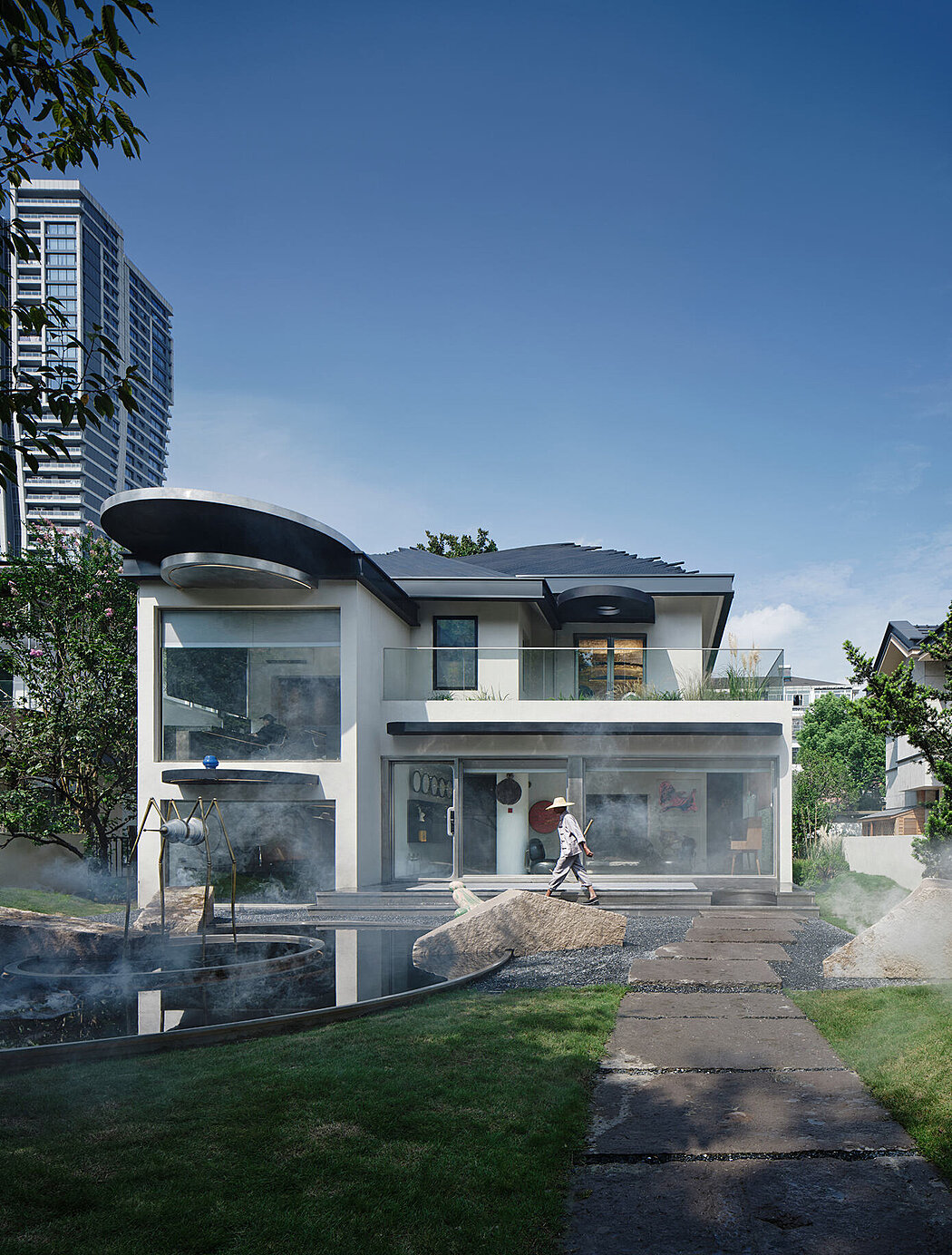 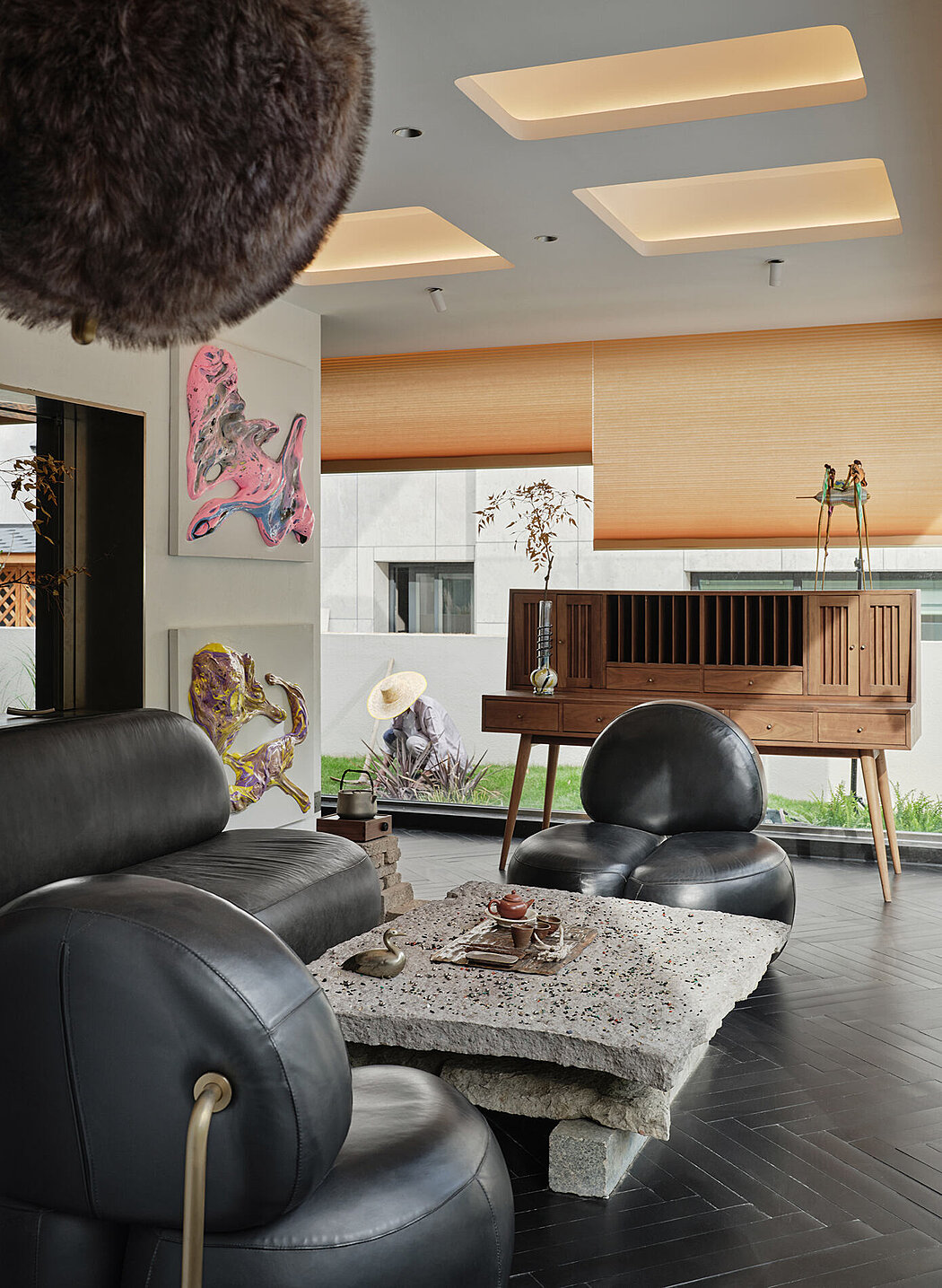 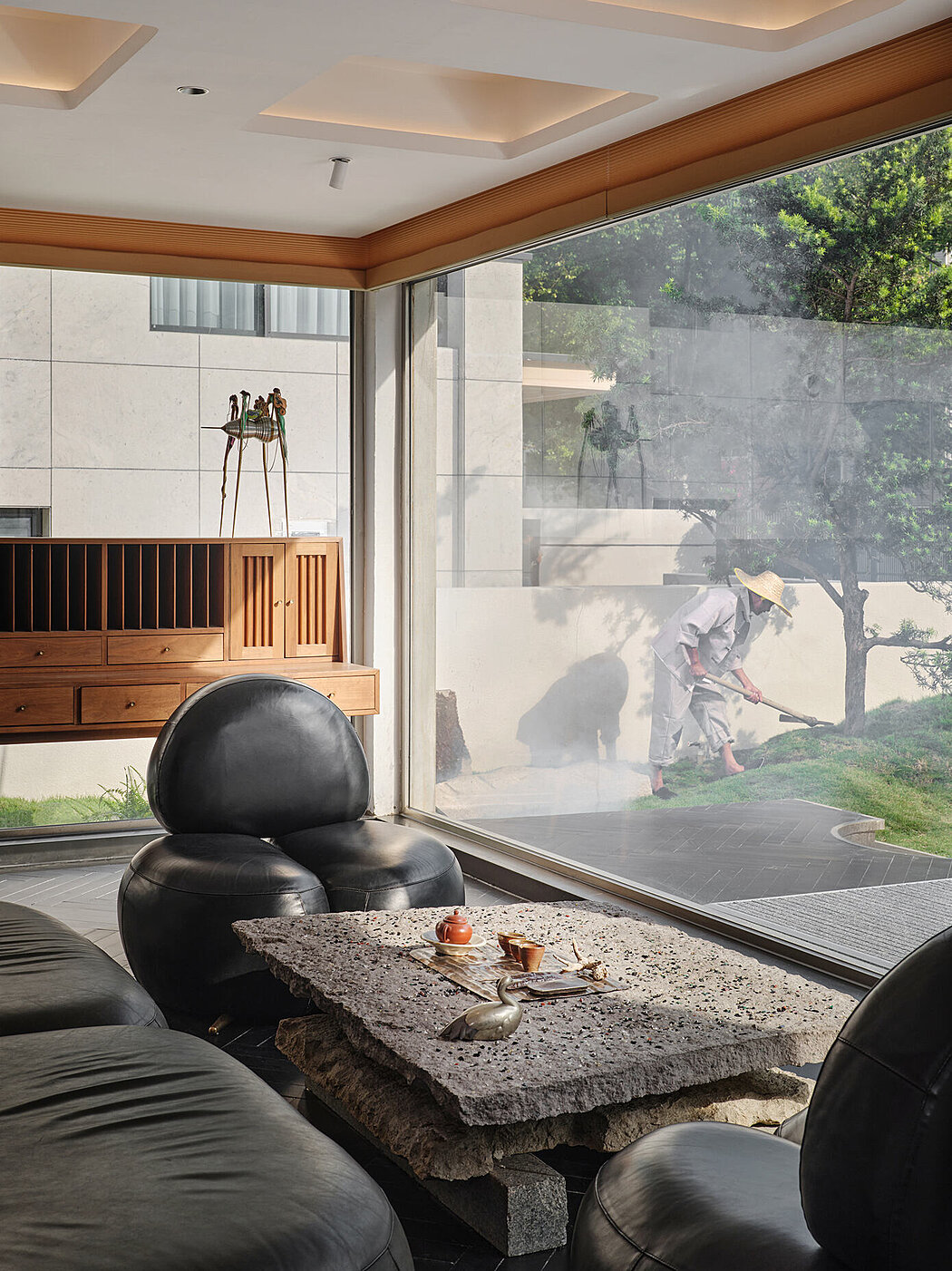 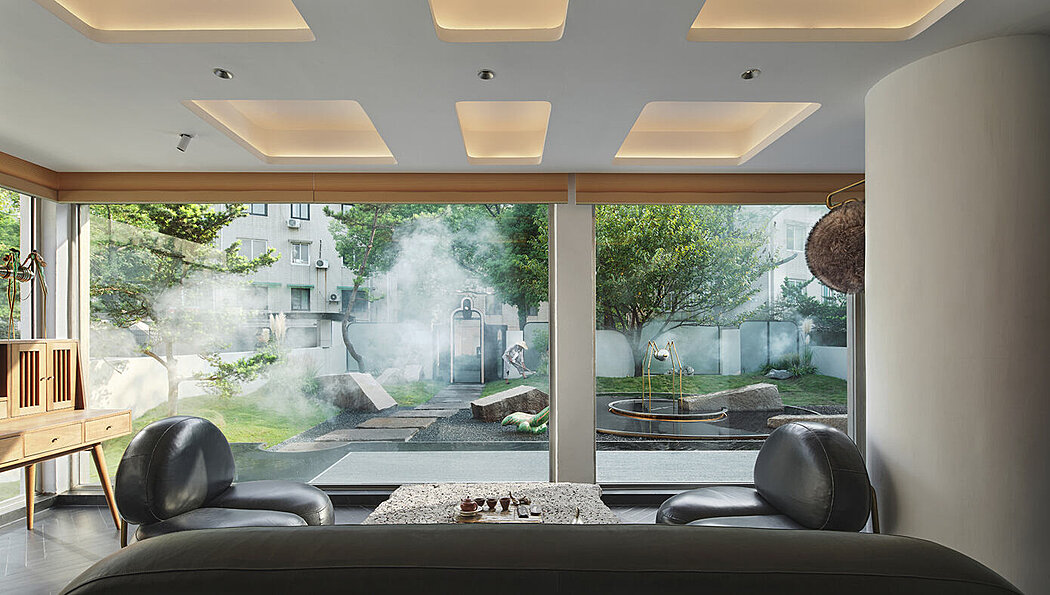 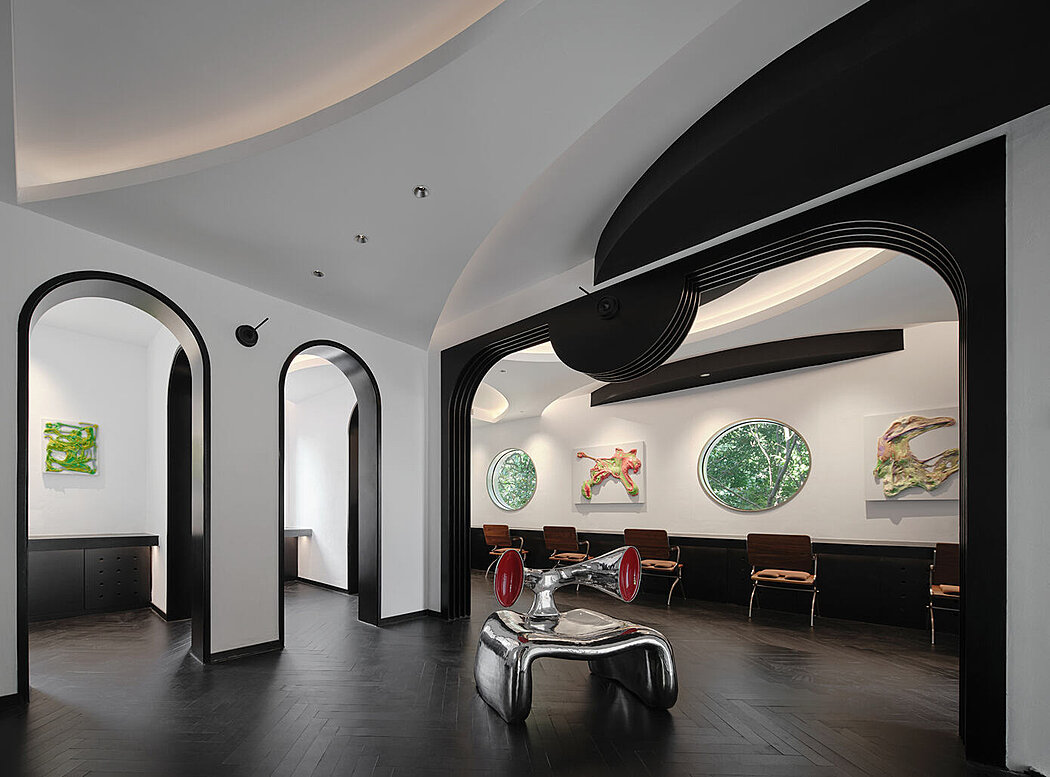 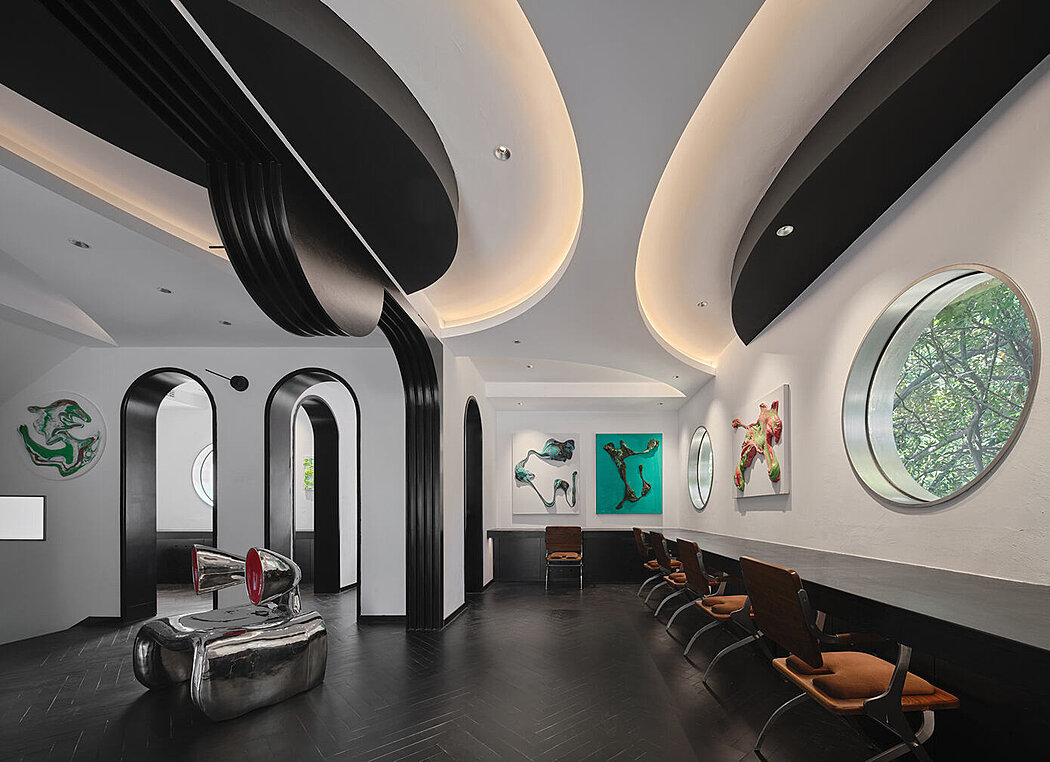 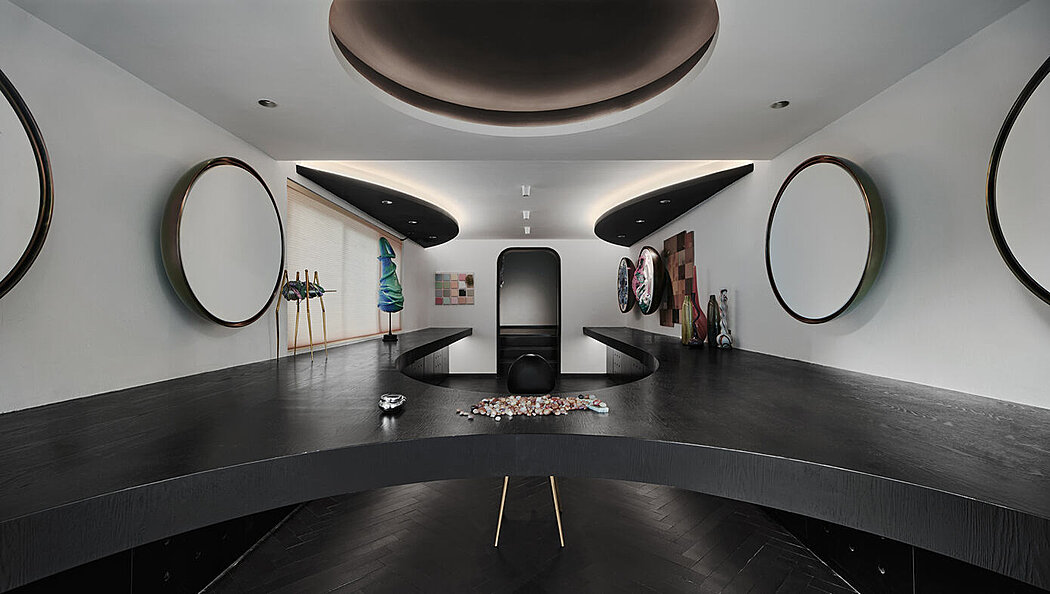 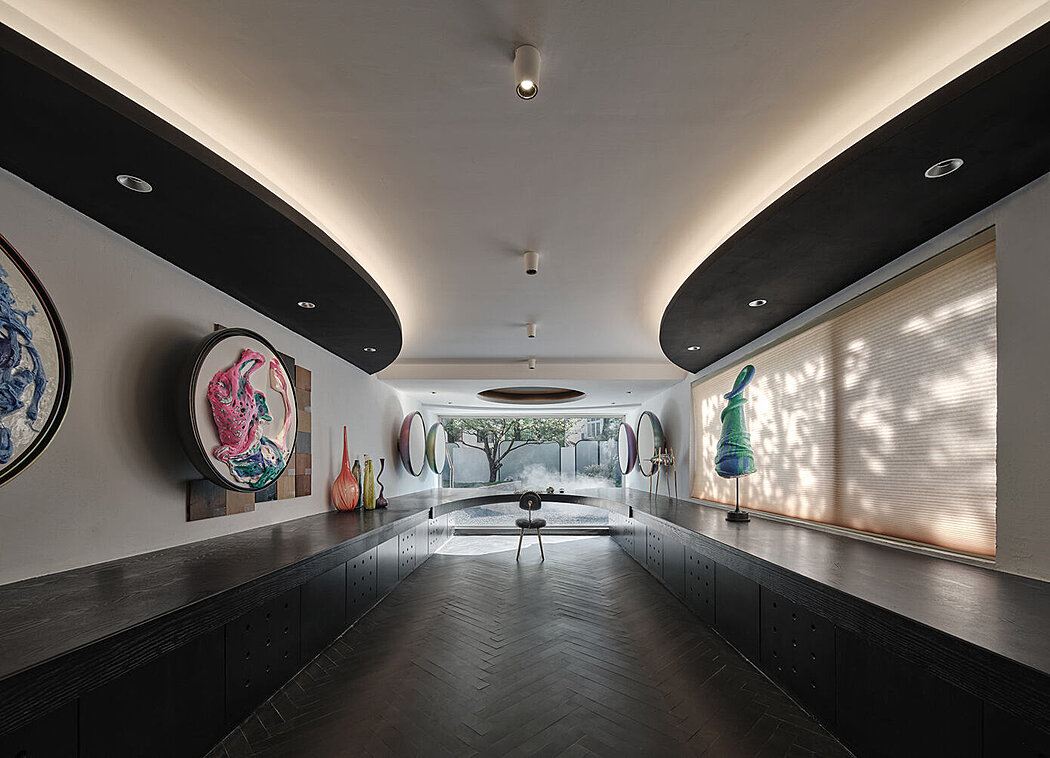 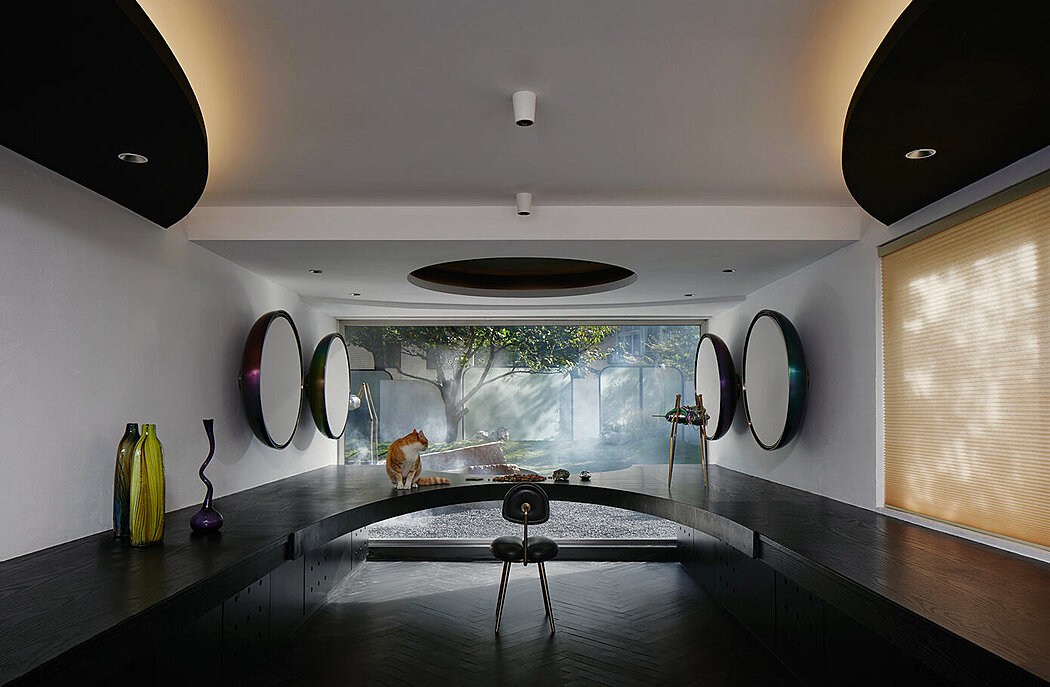 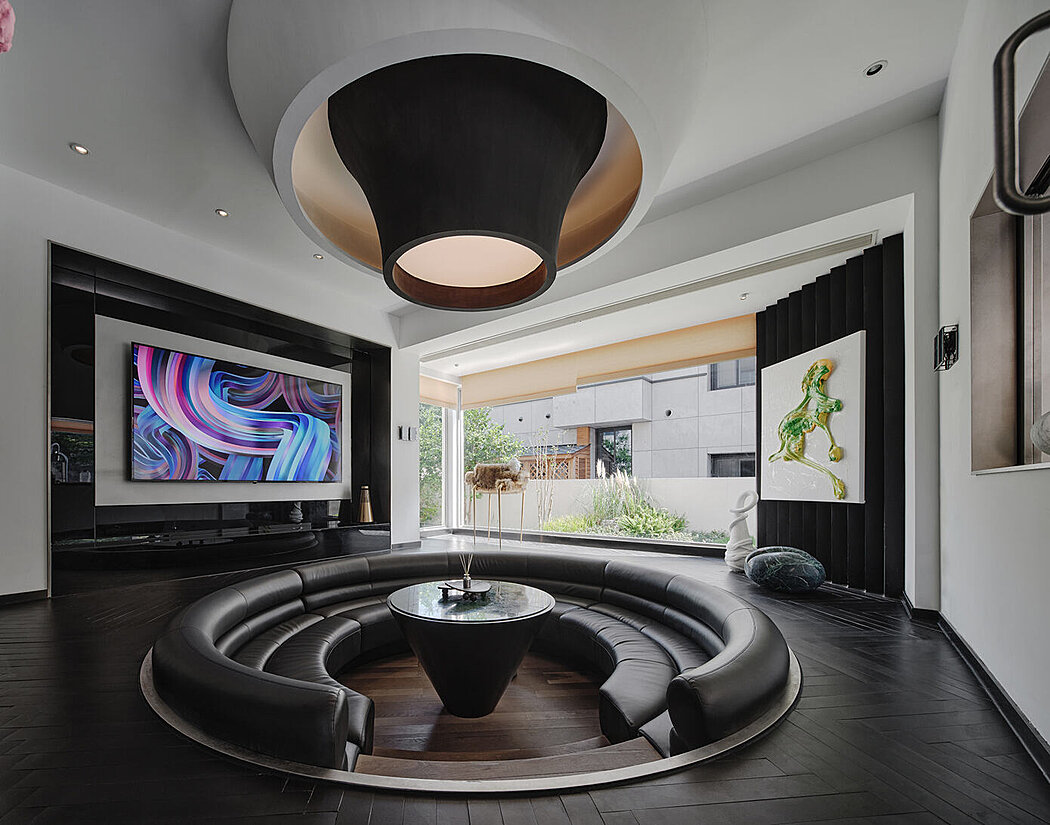 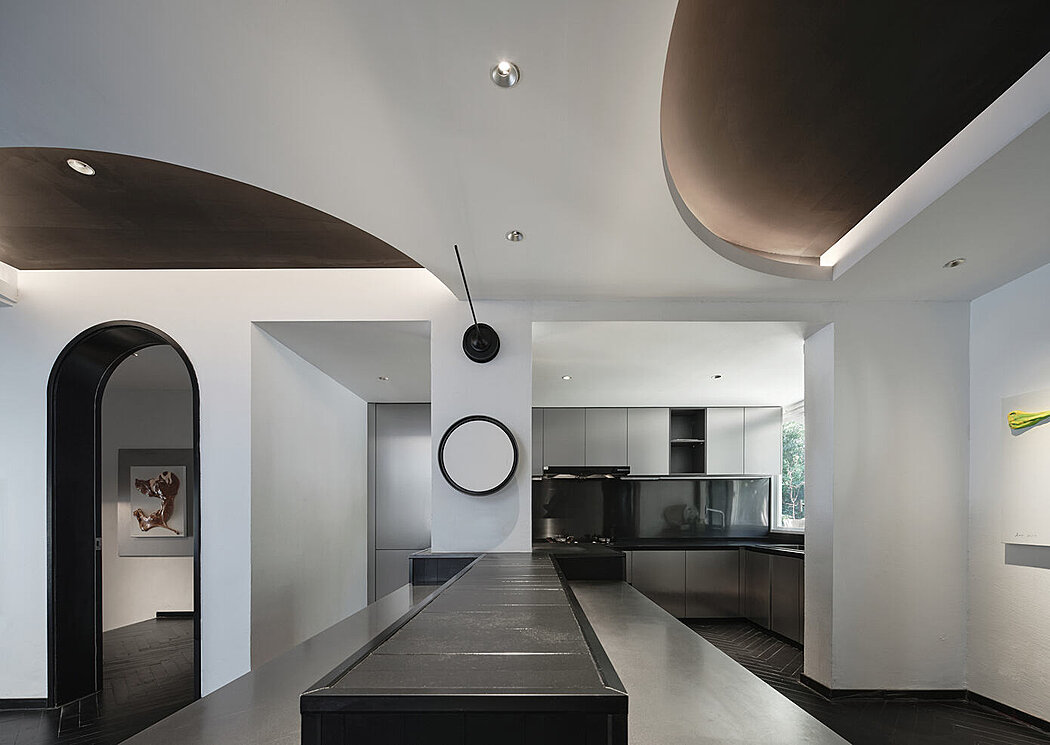 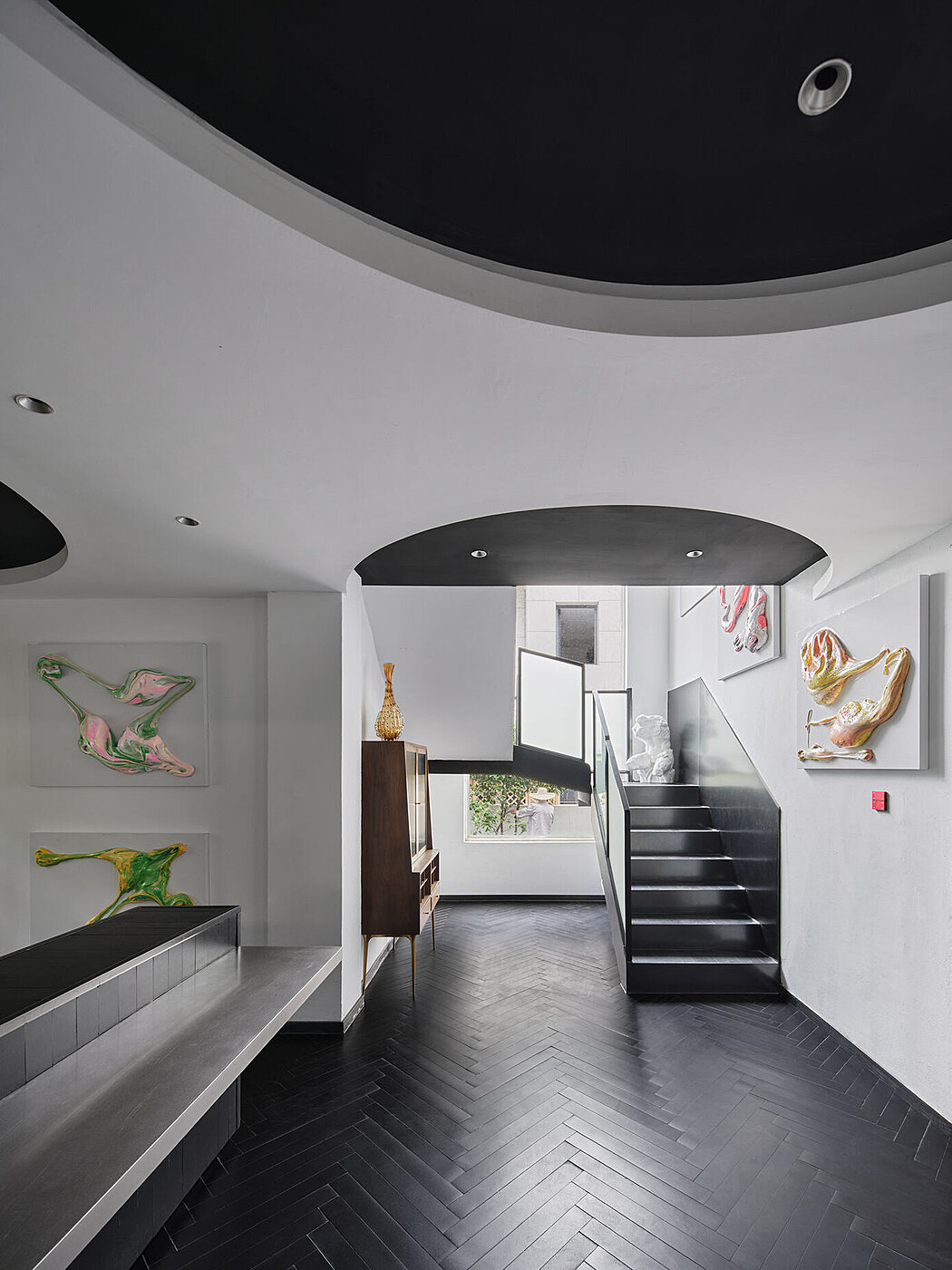 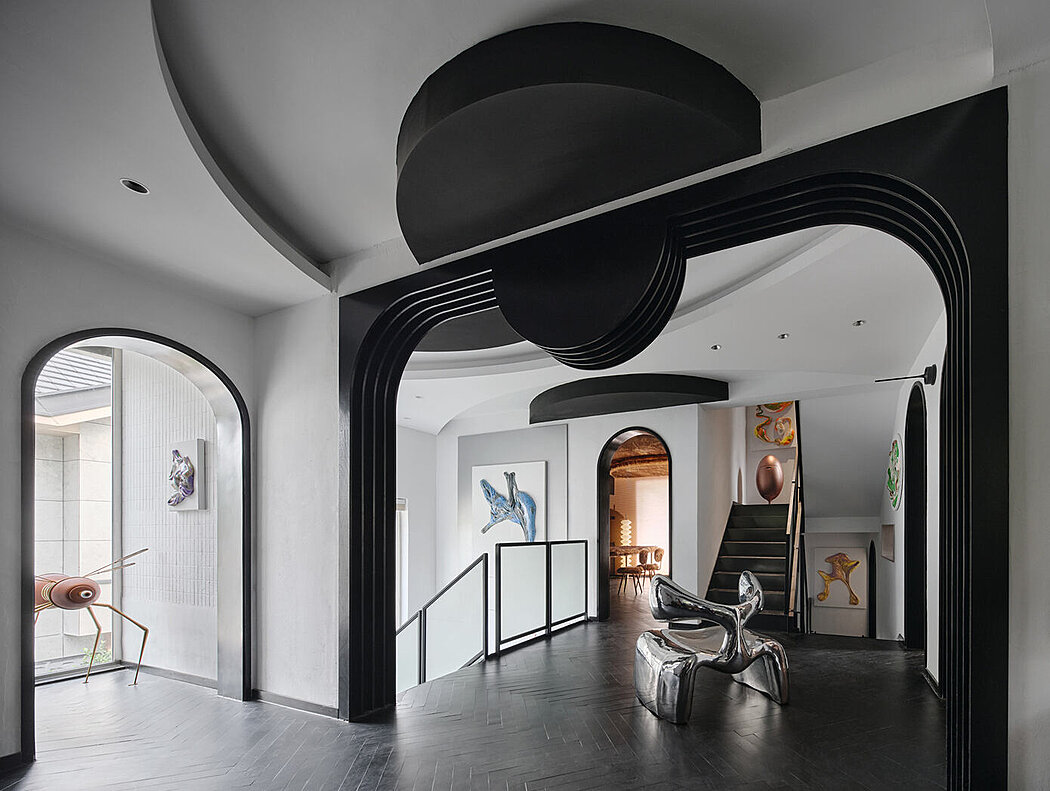 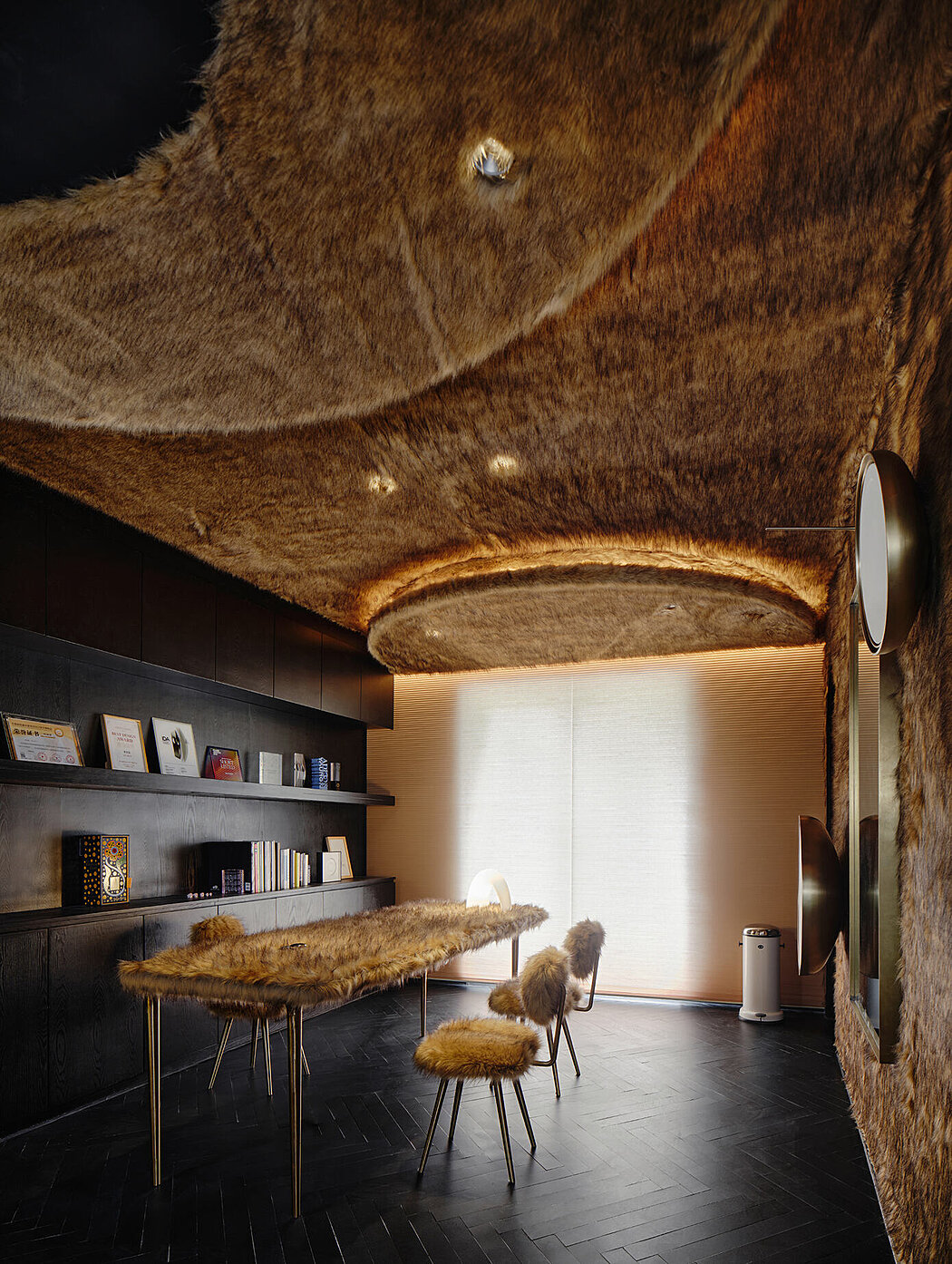 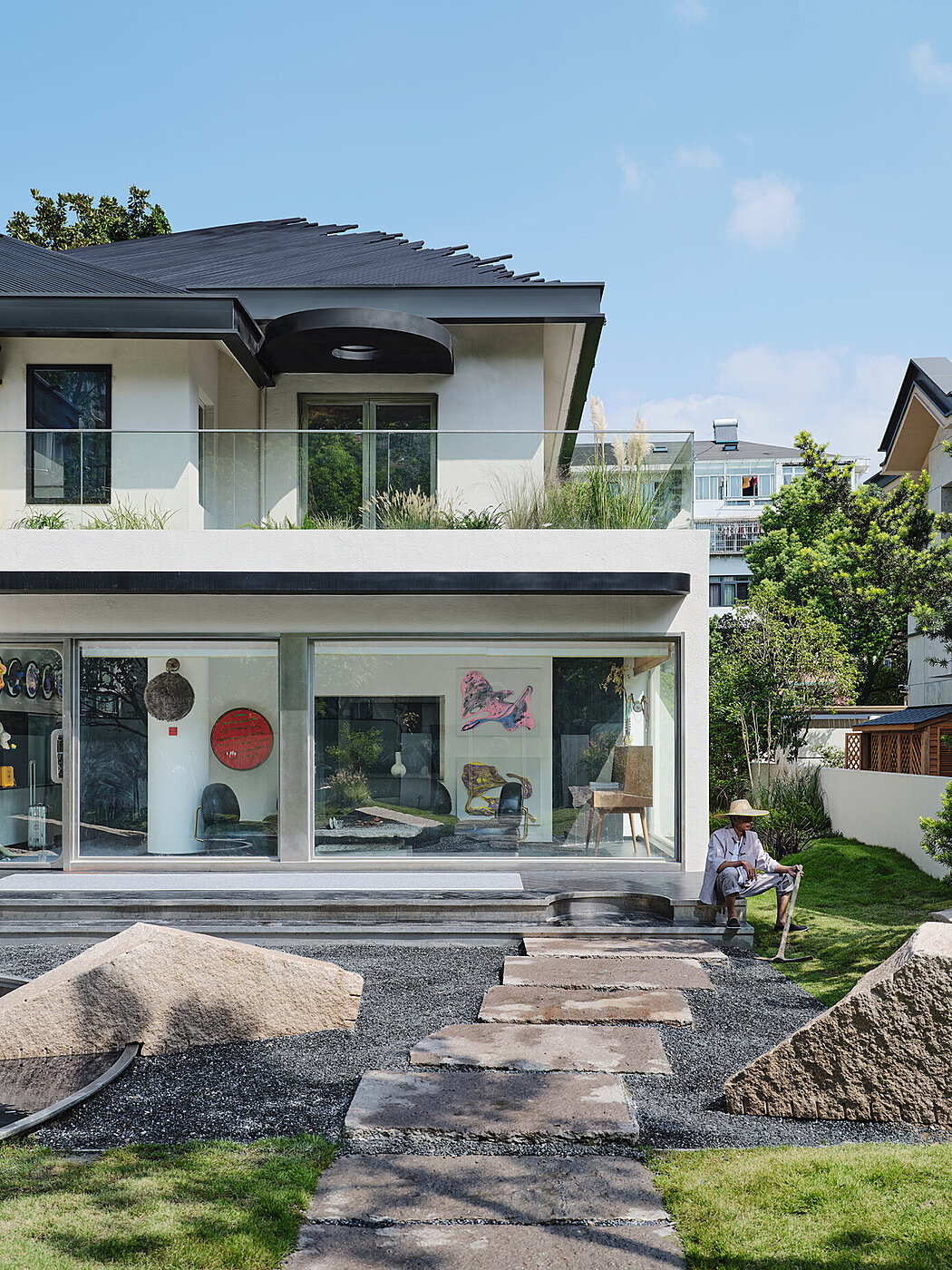 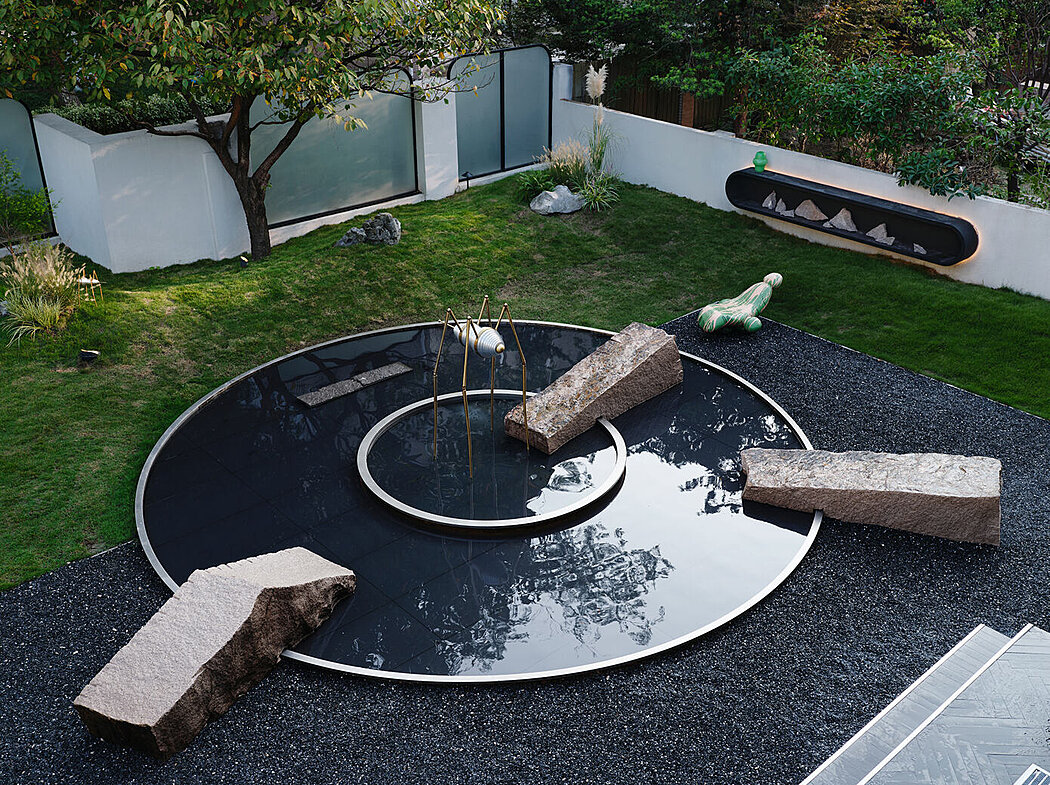 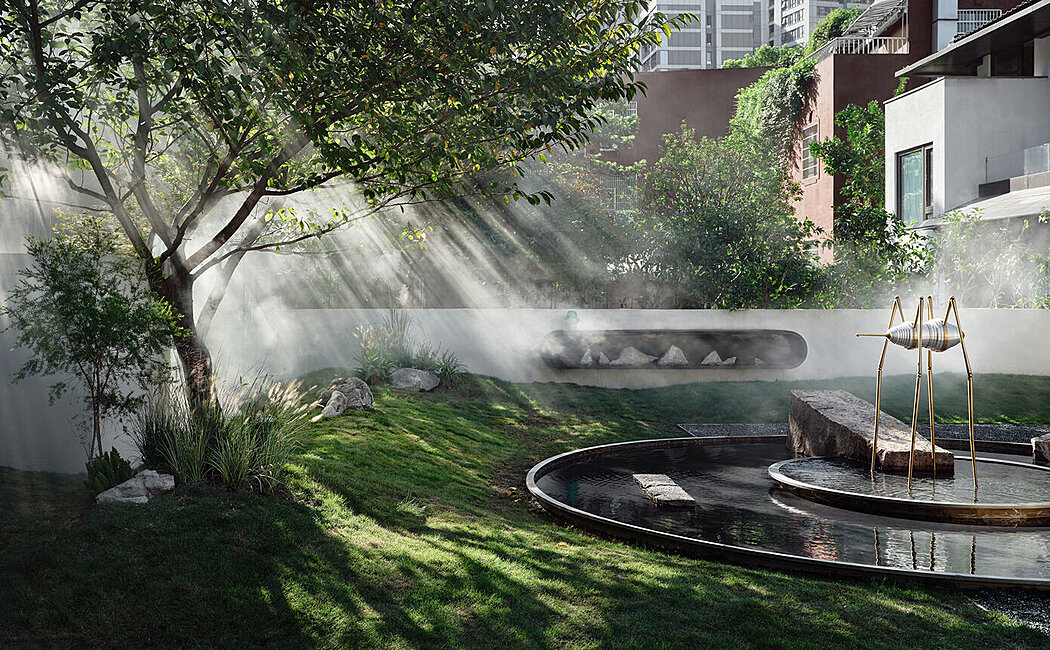 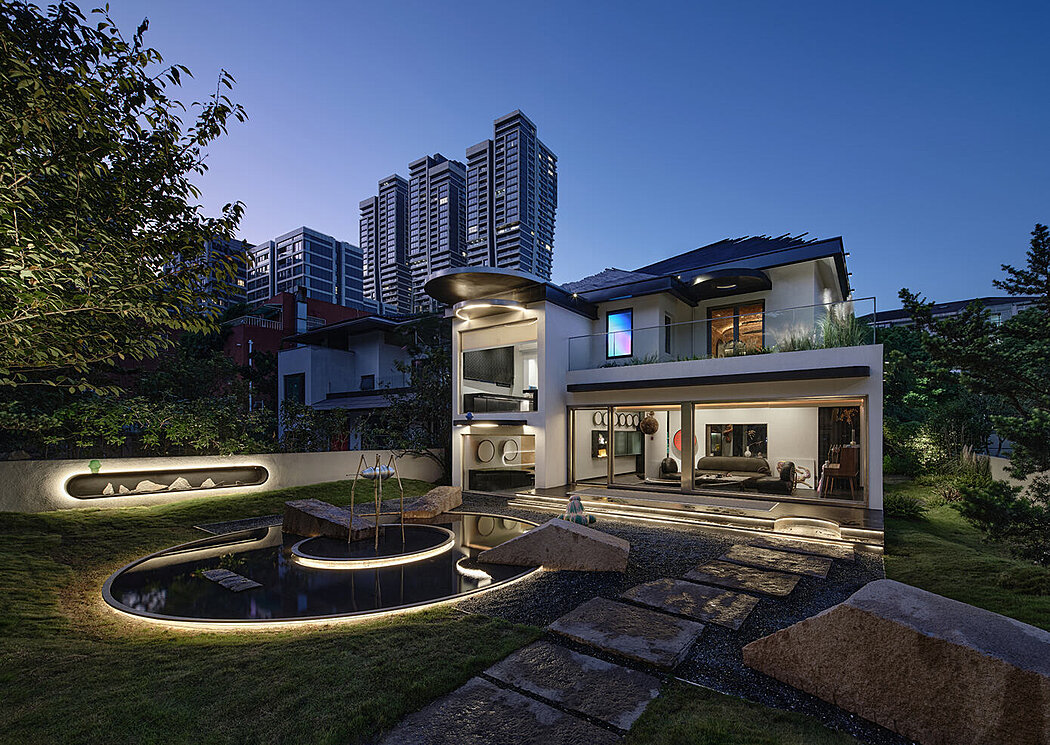 PIG HOUSE: A Conversation with Nature

Located in an old residential area of Binjiang, Hangzhou, PIG HOUSE – the office of PIG DESIGN – sits beside the Qiantang River and across from West Lake. In an effort to break away from traditional office buildings’ indifference to the local environment and lack of cultural significance, Li Wenqiang decided to transform a detached old house into PIG DESIGN’s studio.

The original building was built more than 23 years ago (in the 1990s). The design intervenes in a simplistic and sustainable manner, maintaining the original state of the main structure, while inserting several floor-to-ceiling glass windows on the facade in order to blur the boundary between inside and outside and connect the architecture, space, and landscape.

The project occupies a land area of one mu (approximately 666 m2) with a total interior area of around 250 m2. It took one year from design conception to completion. Keeping a practical, functional layout, the building only went through minor modifications, while the outdoor courtyard was the most demanding part of the project.

The entrance to the courtyard is modest in scale, and the 900mm-wide gate conceals a secluded atmosphere. PIG DESIGN’s signature sense of humor is incorporated into the design: the odd-shaped entrance resembles a “piglet” in its compositional relationship with the building, while the roof arranged with cheap black PVC pipes looks like its hairstyle.

The Power of Nature

The black gravel pavement invites visitors to step into the secluded courtyard, which is rich in nature, sunlight, and water, and regulates the microclimate cycle consistently. The undulating topography reveals the wildness of nature, where plants flourish and birds chirp. Like a fertile foundation for inspiration and creativity, it accumulates infinite potential over time.

Li Wenqiang explores the “second nature” of art and design from the perspective of a “farmer”. In this extremely complex and viable reality world, he devotes his attention to the “seeds” of his works. After scattering the “seeds” everywhere, he patiently takes care of them and waits for the fruition – just like the relationship between farmer and land, exchanging labor for the gifts of nature and responding to the dynamics of the environment and the laws of everything.

In the center of this landscape, a shallow pond in the shape of a ring is created, with the inner and outer circles forming concentric round shapes. Four giant rocks distributed in the pond, on the gravel, ground and lawn blend into one another, signifying a symbiosis of the elements, while introducing “time” into the scene with the image of a clock. In both artistic creation and agricultural cultivation, the most luxurious thing is the waiting period.

To break away from traditional office buildings’ indifference to the local environment and lack of cultural significance, PIG DESIGN transformed a detached old house into their studio. The interior of the two-story building incorporated office, conference room, tea room, dining room and workshop, creating a combination of professionalism and ordinary life. The team focused on a gallery-style exhibition perspective based on the organization of disarrayed blocks, compressing the depth of the space with paintings and dissolving the volume of the partition walls.

The paintings were improvised with light clay and solidified with techniques of artefact restoration. Neither painted by hand nor sculpted, they resemble seeds of inspiration, capturing spontaneous ideas in a moment. The content on the frames is updated as the seasons change, the state of mind alters and new materials are developed.

The space has unhindered access to outdoor sceneries in all directions. The reception tearoom accommodates tables made of stacked raw stones, perpetuating the coarse texture of the courtyard. In the sunken meeting space, a circular seating area echoes the curved ceiling, strengthening participants’ rapport during discussions. The sunken garage is transformed into a large table that connects the space and serves as an immersive handicraft workshop.

PIG HOUSE is the materialization of Li Wenqiang’s concept: working down to earth and absorbing its nutrients, cultivating on the soil, and bringing the fruits into the daily life of the urban public. With black and white as the unifying tones, PIG DESIGN’s original furniture and artworks appear as splendid decorations dotted here and there, also as witnesses to the development of the studio. The office area on the second floor has the capacity to accommodate a 20-person (17.7 m²) team. Moreover, there is a “Furry House” covered with artificial furs, serving as Li Wenqiang’s private office.