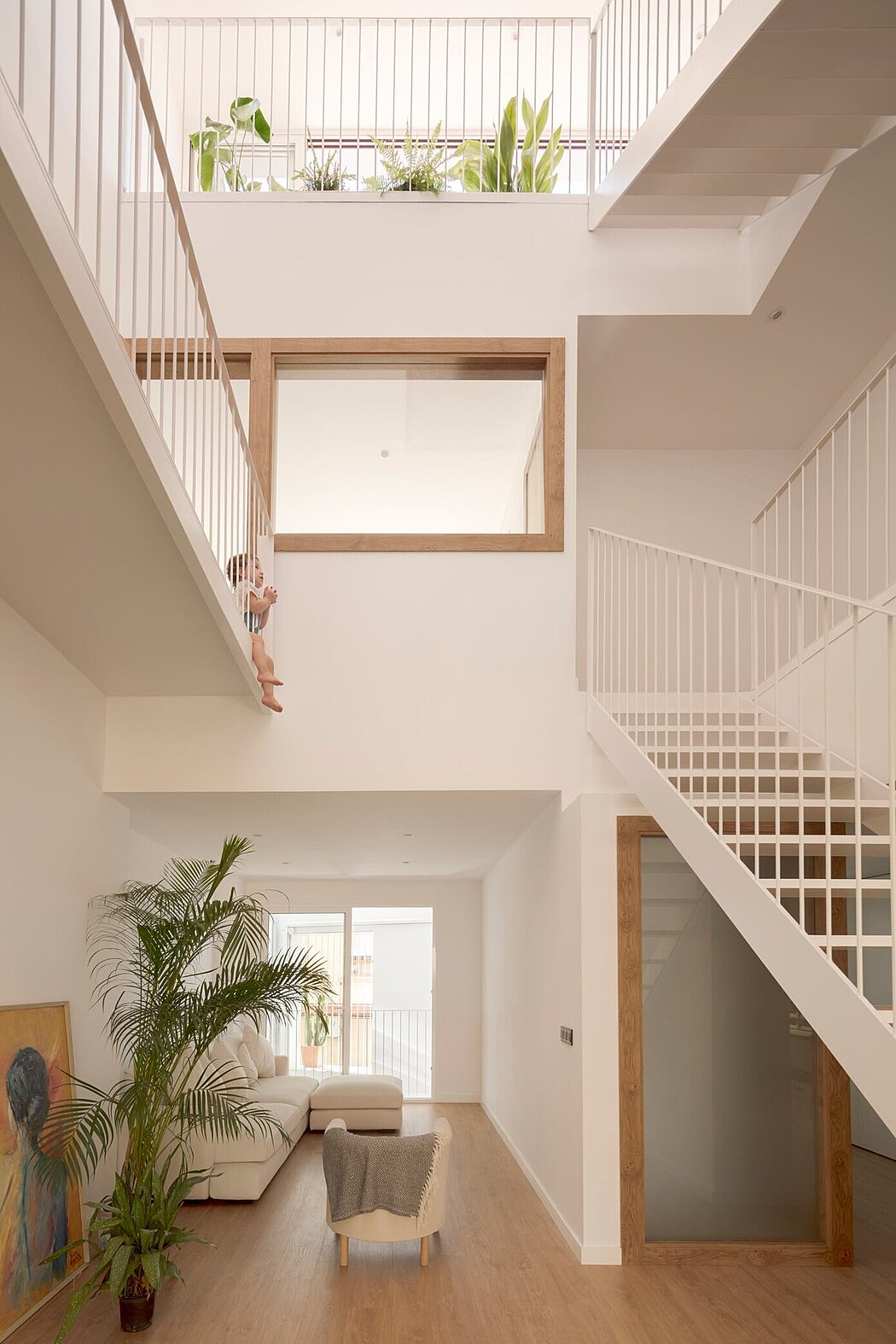 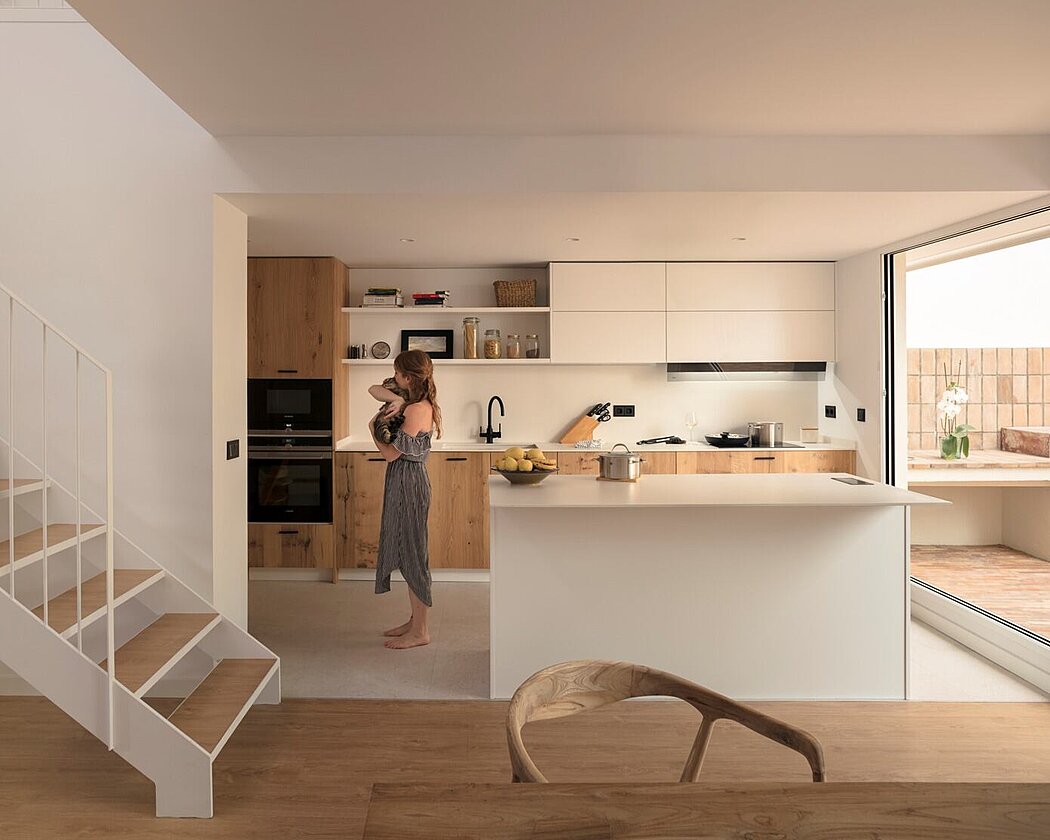 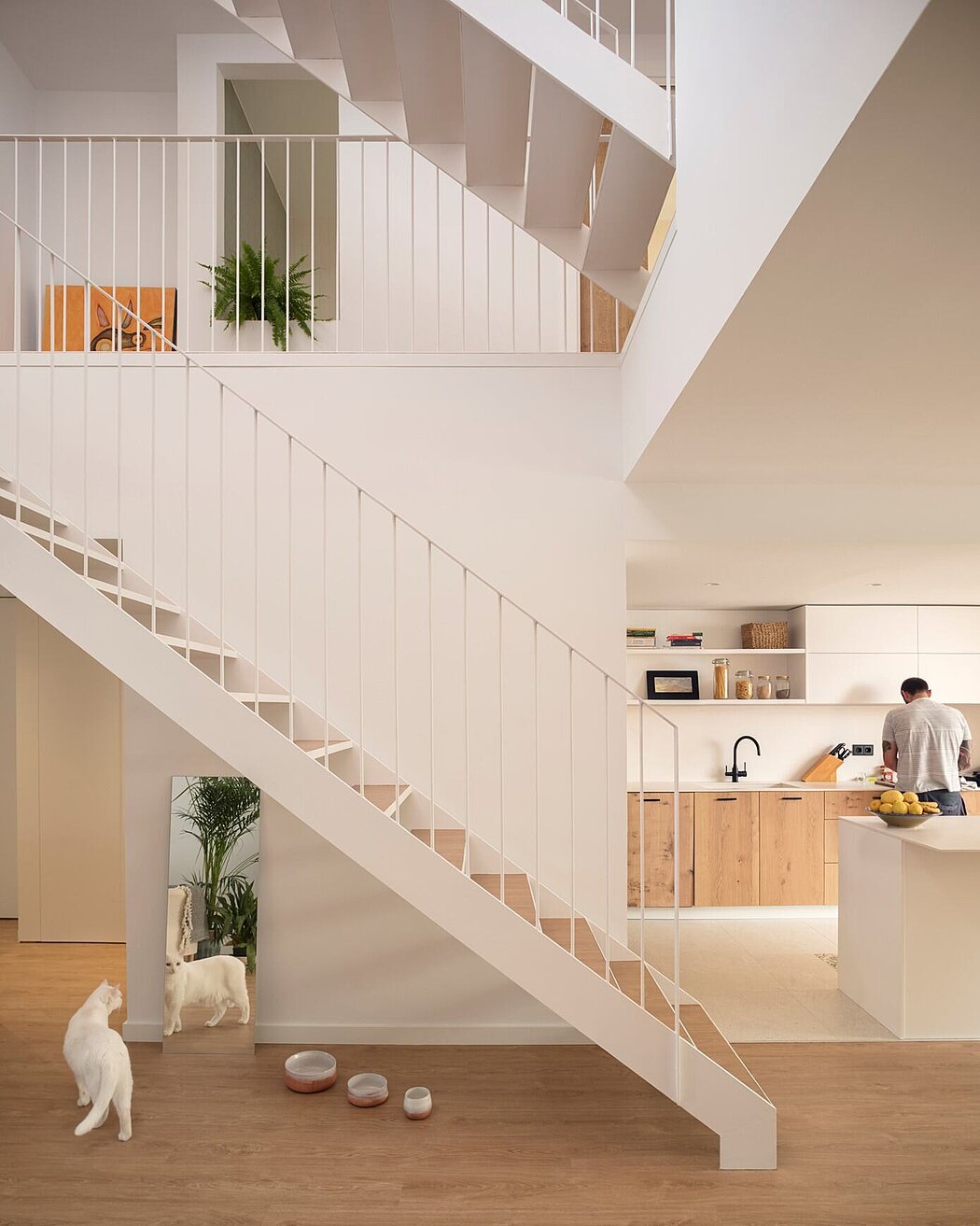 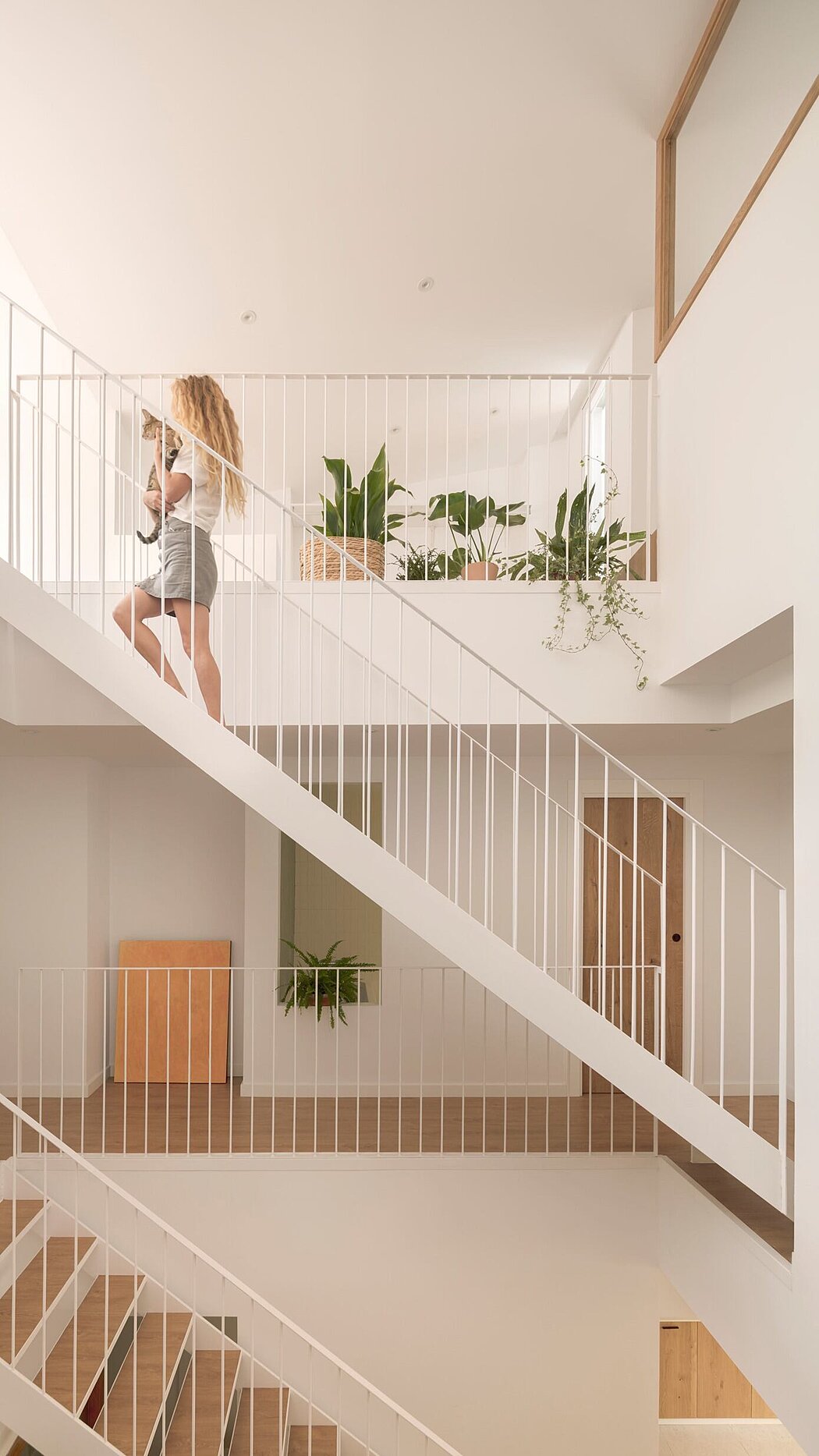 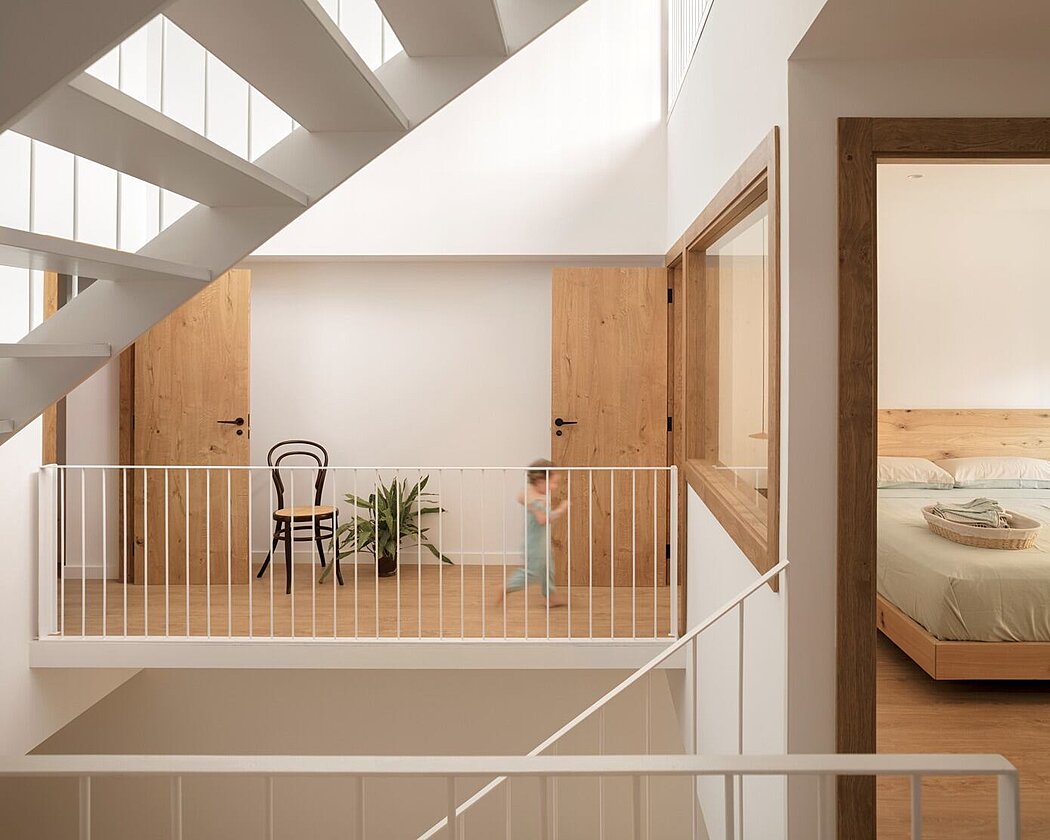 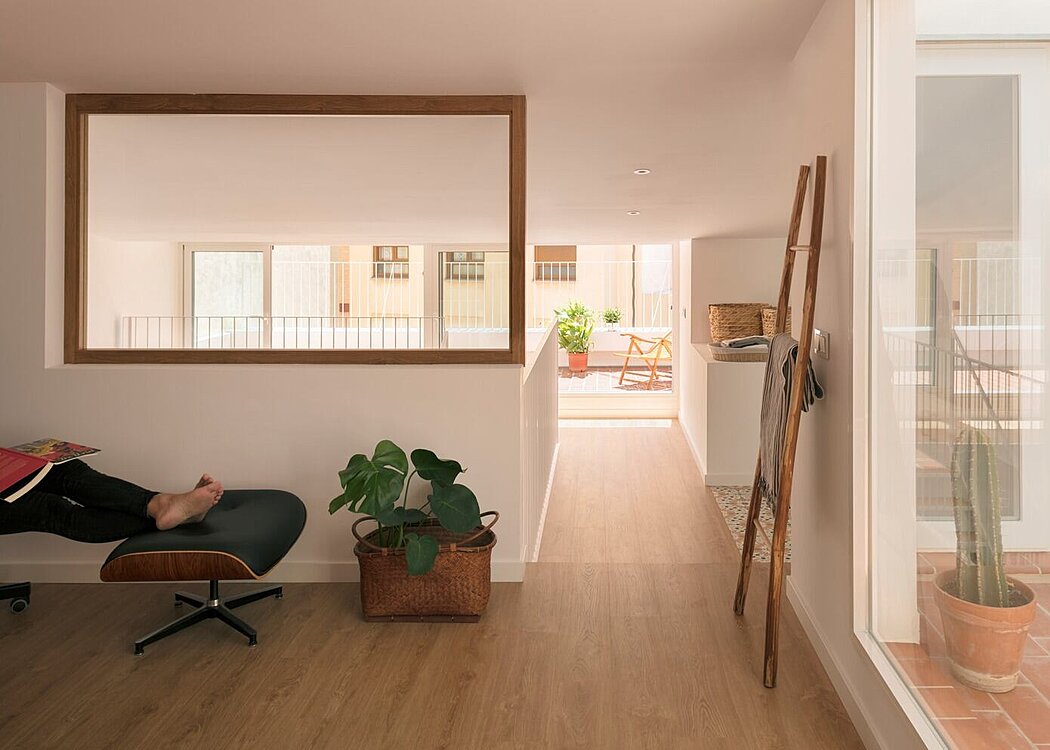 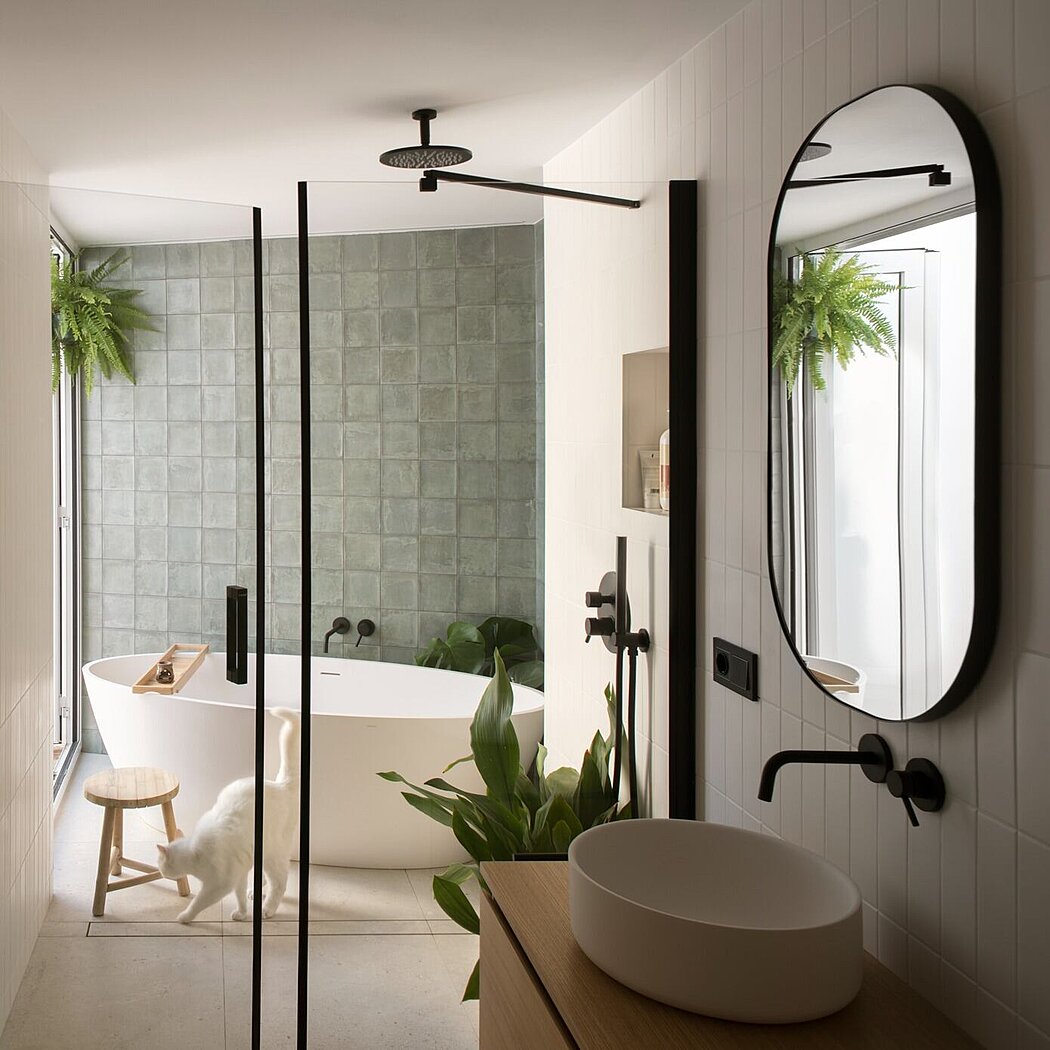 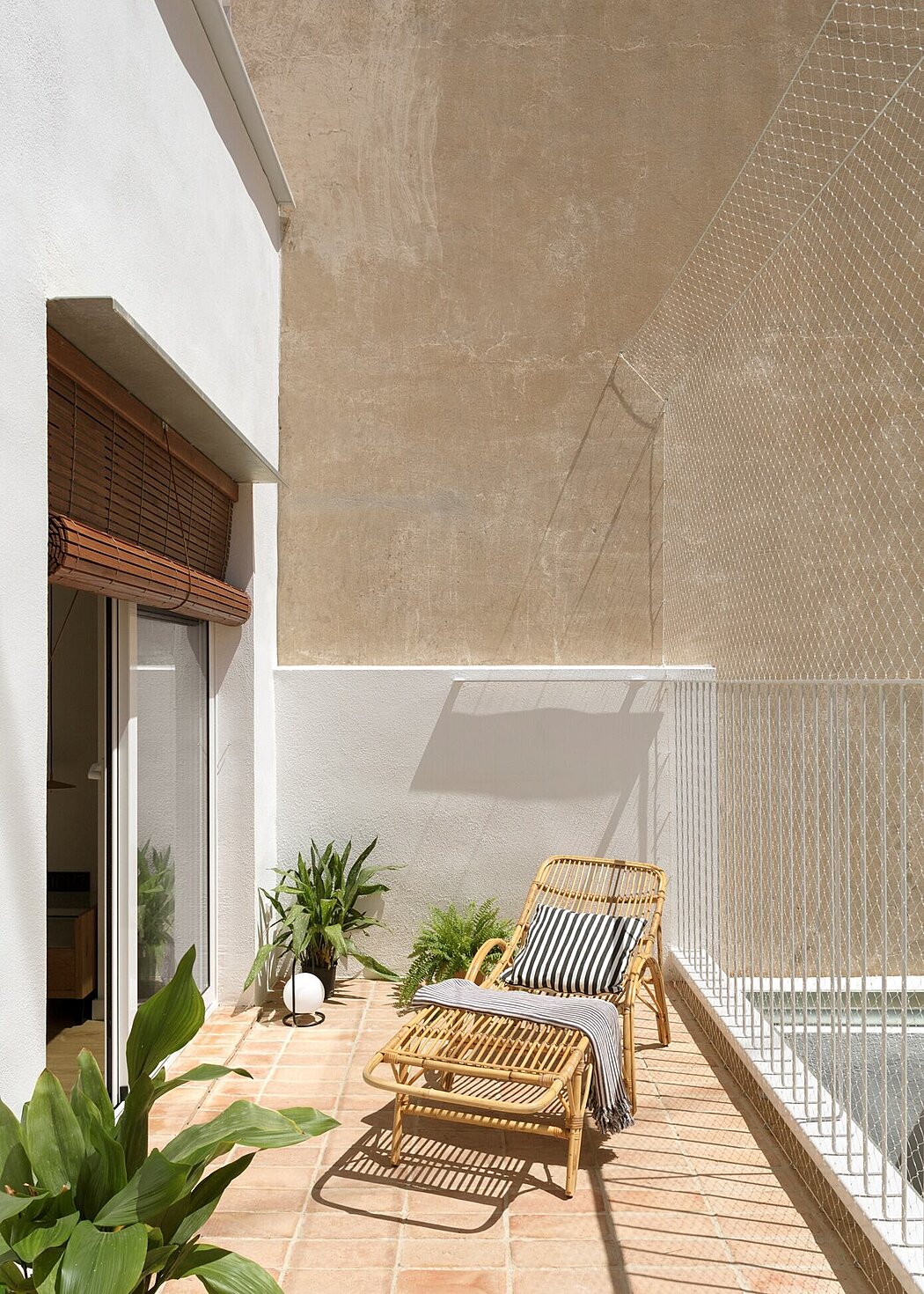 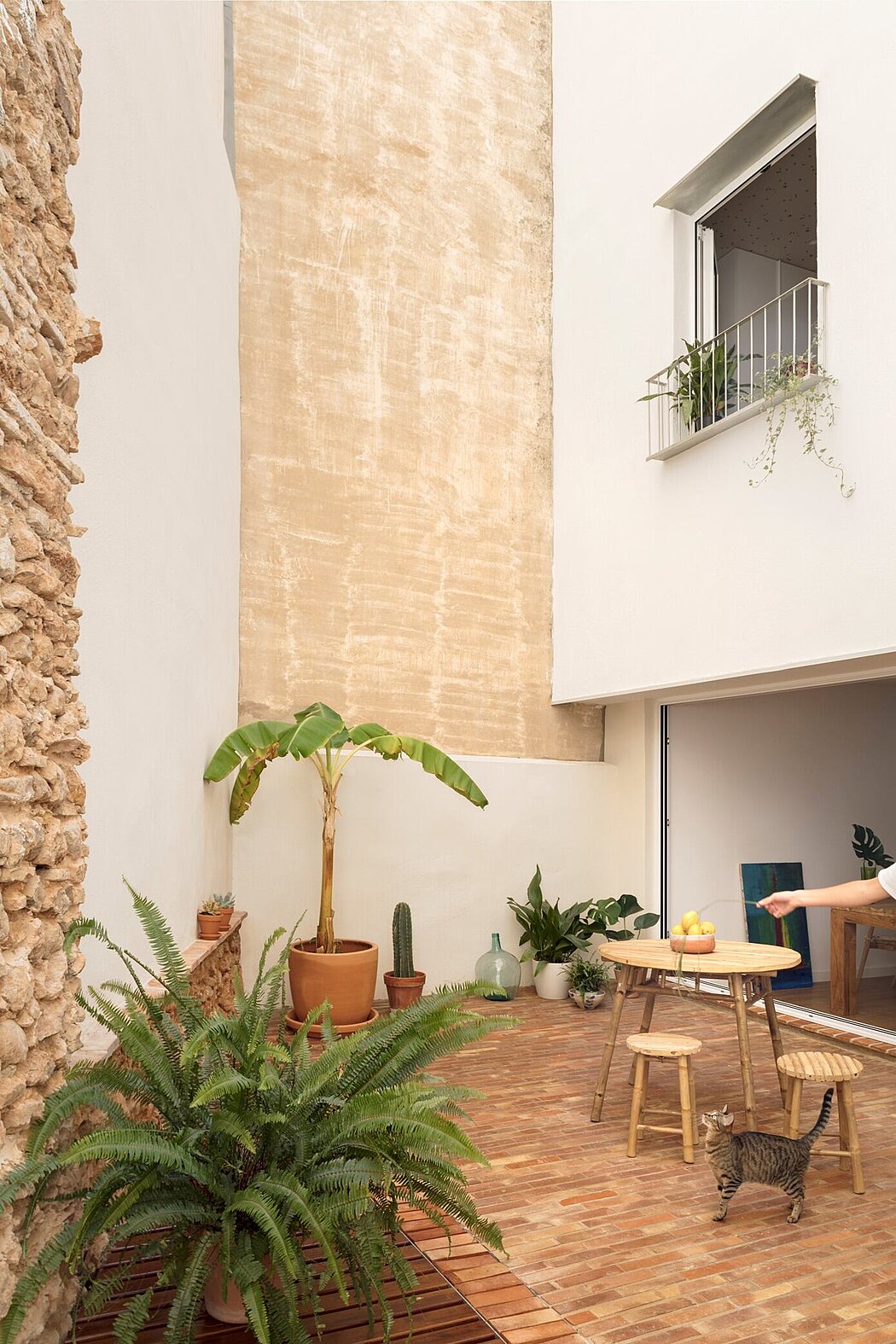 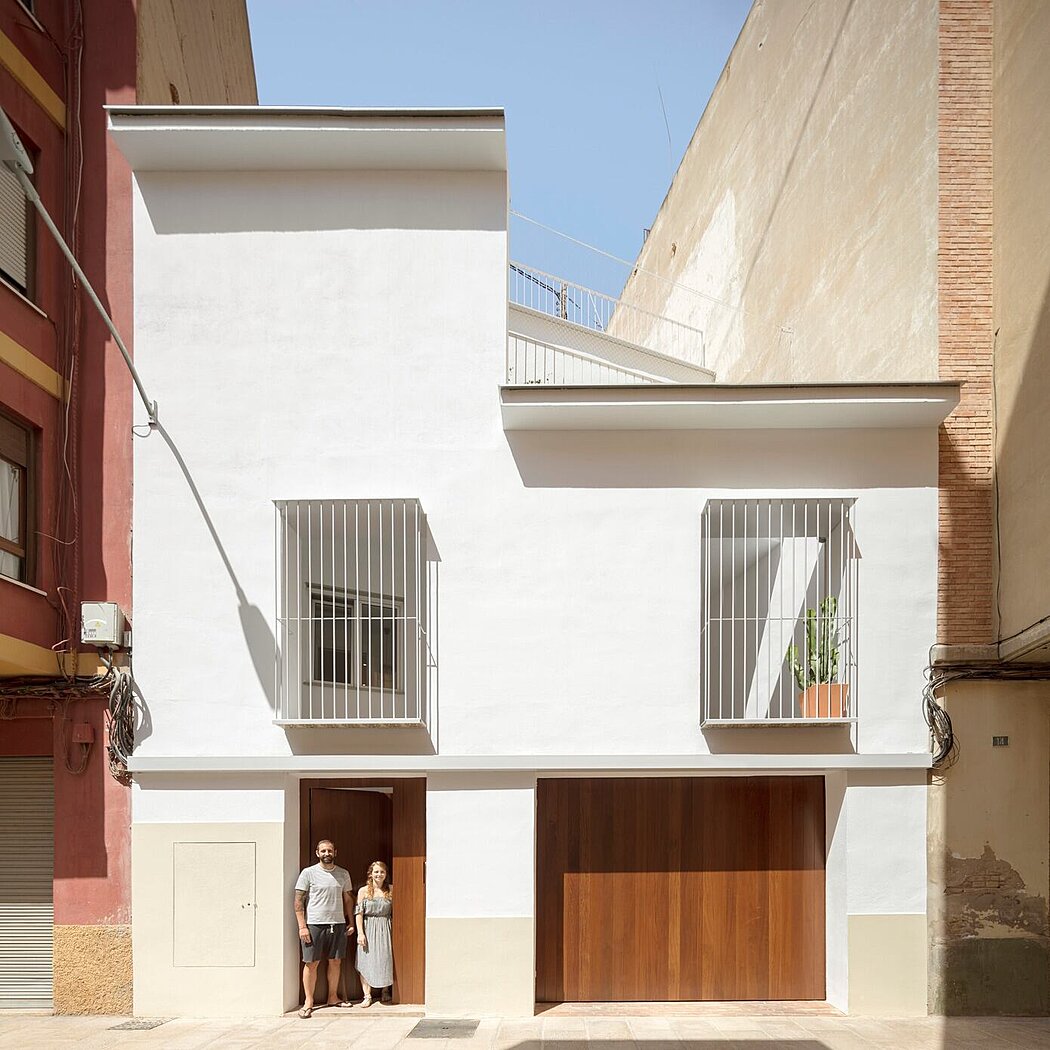 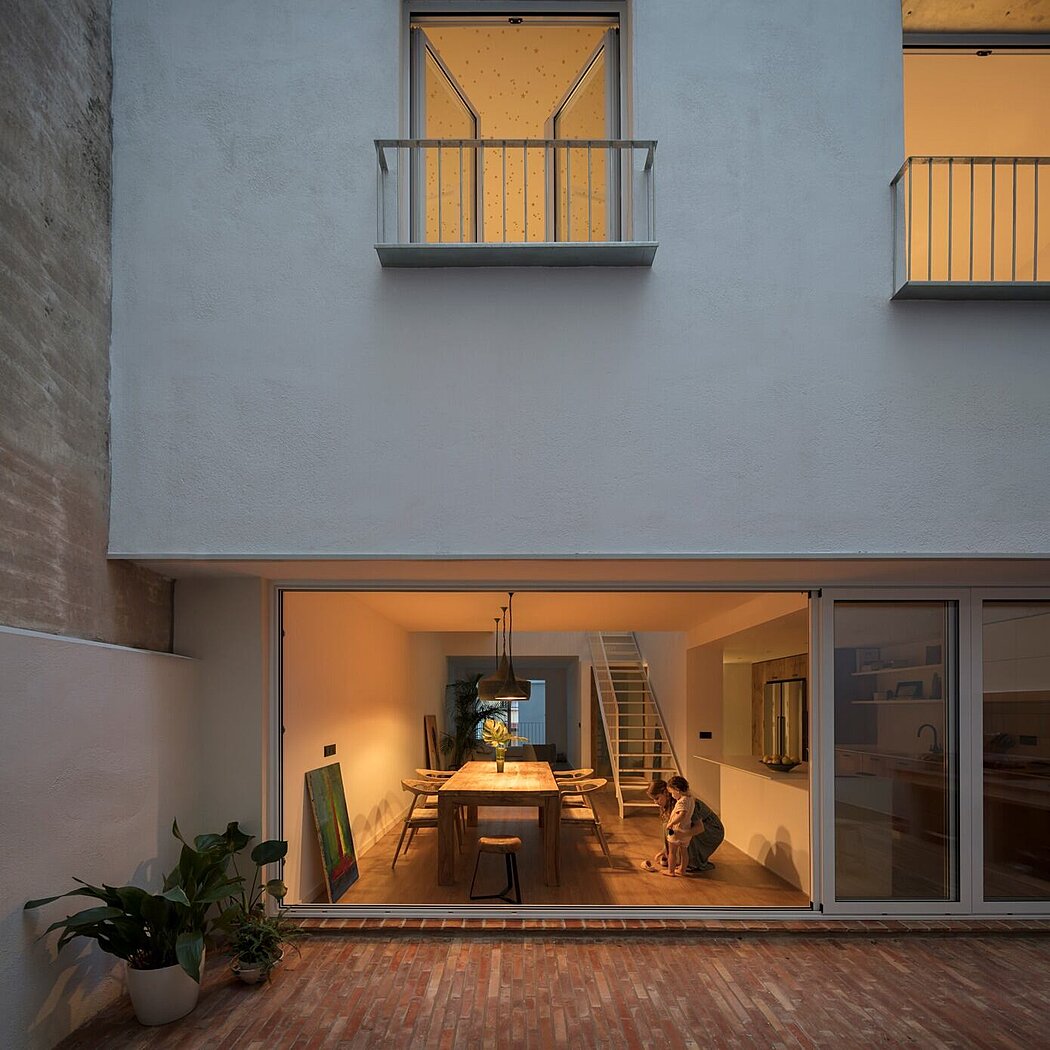 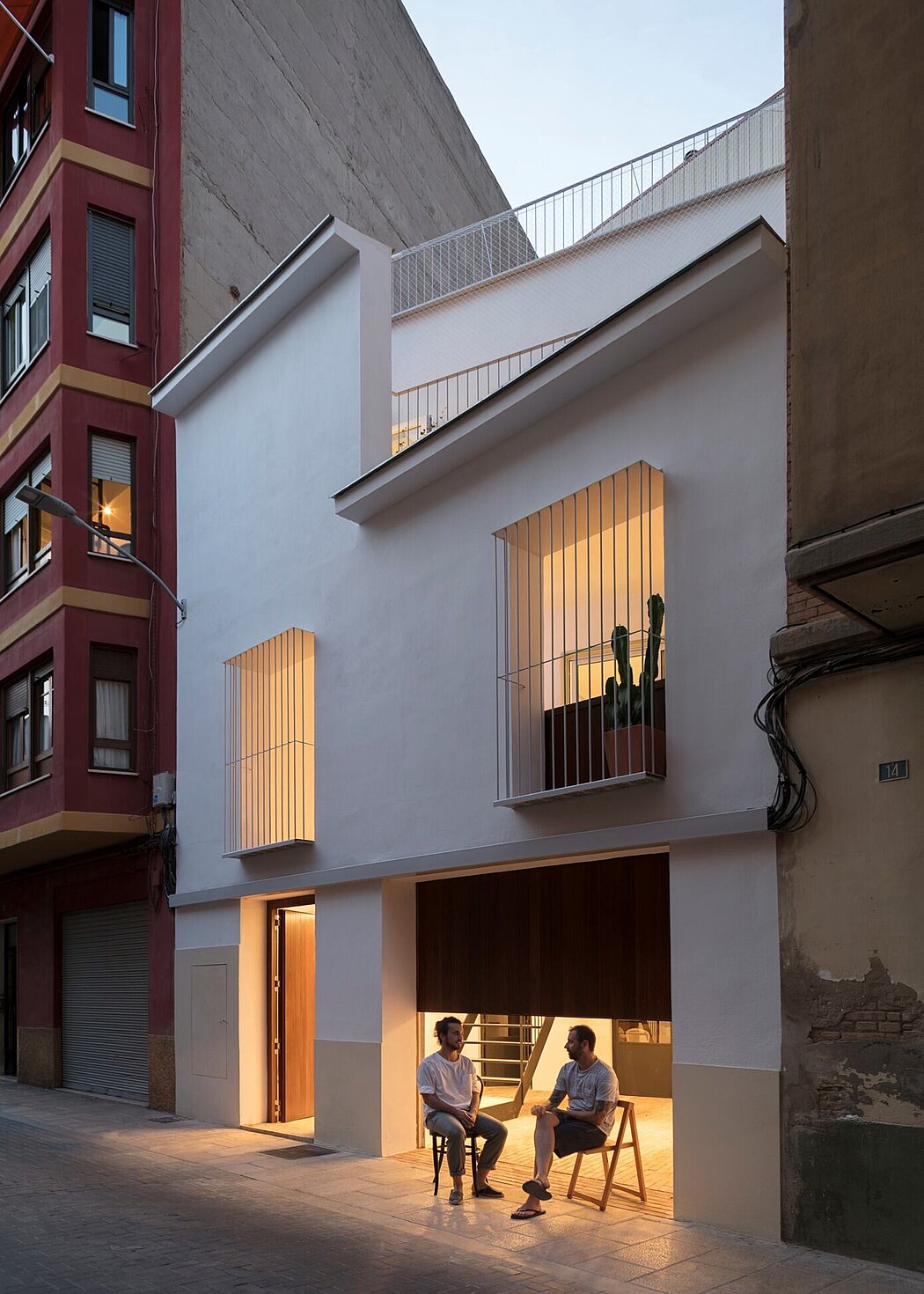 a “Casa entre medianeras en el Raval de la Trinitat” is an open between courtyards. It claims to maintain the image of the traditional neighbourhood due to the conservation of the historical façades system configuration characteristics from the Raval during the 19th century. The house, wedged between high party walls, acts as a small symbol of resistance and sensitivity.

To this end, the housing consists of a three-storey volume is set back seven metres from the main façade. This façade preserves the proportions and spaces characteristics of the neighbourhood, leaving a small patio porch which represents an intimate relationship between the street and the interior spaces. Housing volume is situated in the centre of the plot. It leaves a space of a landscaped courtyard in the background which is 7 meters deep. It also serves as a ventilation and illumination system.

The project shows two architectonical conditions. On the one hand, its façade, as well as its exterior volume, express the will of maintaining the scale and the typology of traditional housing from Raval de la Trinitat. This typology has been slowly disappearing due to the construction of anodyne buildings from the 70s and 80s. On the other hand, new housing should be assuming contemporary ways of life for young families. New housing is set back from the street not to be visible and so to have natural light and terraced spaces. The second façade of the house presents clean lines and no ornaments. It combines vernacular elements such as shutters and eaves. At the same time, it is committed to a simple, clean and outright image which integrates functional and technological spaces that coexist with sensitive, sensorial or traditional ones.

The project results in a reflection upon the way of life within the domestic space. It focuses on a spatial continuity that brings fluidity to the home, where the limits between the rooms are not built with fixed partitions but diluted in furniture solutions, moveable partitions or integrated spaces. It allows the creation of new flexible and changing spaces that can be adapted over time. This continuity is stablished horizontally, between spaces located at the same level, as well as vertically, between spaces located in different levels with through the triple height covered space. This central space causes the light entering in all rooms.

The house is distributed as follows:

– The ground floor, in contact with the street through an exterior access porch, precedes a great polyfunctional space for occasions such as celebrations, playground area, workroom, guest room etc. This place receives light and ventilation from the front porch as well as from the back gardened one. Annex to the party wall, a set of facilities and services is found, this includes technical installations and a storage room.

– The first floor is the one for family life. From the porch you can access to a big space which includes a living room and a dining room and kitchen. They are open to the gardened patio-terrace in the back. On the same floor, annex to the party wall we can find the guest toilet, cleaning room, lift, kitchen shelves as well as the pantry.

– The second floor is the most intimate one where the different rooms are located such as: the master bedroom with dressing room and private bathroom and two more rooms in anticipation of the increase of family.

– The ground floor gives access to the terrace and decks. It hosts, underneath the structure slope, the laundry room and the clothesline, as well as the terrace with the installations and a storage room.

The house improves its spatial quality by obtaining a light source from a skylight located on the deck which crosses the house from the central patio to the ground floor. The patio turns into the heart of the house where all the spaces are visually communicated. The house features three spaces for family and recreational gatherings such as: the porch and the ground floor as a place for more public gatherings, the garden for more private ones and the deck for all kinds.