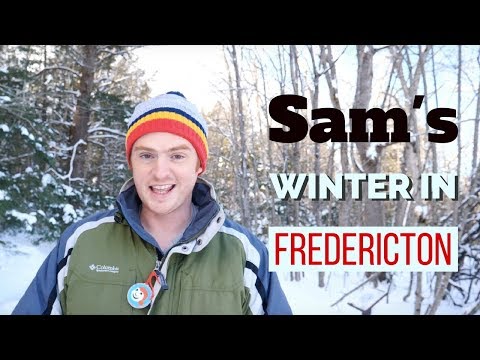 Join us for a Winter in Canada vlog as I visit family in Fredericton to enjoy some relaxing downtime and to experience snow related activities including watching hockey, snowshoeing and enjoying a snowstorm. Audrey’s family lives in Brampton, Ontario and my family live in Fredericton, New Brunswick so after spending Christmas and New Year with her family at a cottage in Seeley’s Bay I hopped on a plane to spend a couple of weeks with my family.

Things got off to an iffy start when all of the flights leaving Toronto for Fredericton were canceled aside from mine. With fingers crossed I was able to make it out and the views over Toronto upon leaving were the nicest I’ve ever seen. A winter wonderland covered in snow with clear visibility. However, as soon as we left Ontario and entered Quebec we entered a thick blanket of clouds and the flight was super turbulent until we landed.

Upon arriving in Fredericton the snowstorm hit really hard and the entire city was covered in a thick blanket of snow. That night, prior to the start of the World Junior hockey game between Canada and Czechia I was craving a pizza and ended up having to go out in the snow to pick it up after only 1/6 places were open.

Canada ended up winning the World Junior tournament with a victory over Sweden and it was great to take it in with my Dad at home. We also ended up going to a University of New Brunswick (UNB) hockey game where they lost for the first time that I’ve witnessed in person.

Aside from hockey it was great to spend time with my Mom and our Maine Coon cat Hobie. He was up to his mischievous self ready to play at the drop of a hat and falling asleep in bowls on the table.

I ordered a pair of snowshoes from Amazon and had just the perfect weather to break them in with my Dad at ODell park in Fredericton. The last part of the video showcases a walk around some of the most iconic parts of Fredericton all covered in snow. For just a brief visit I had a great time being home.

Greetings from Pearson International Airport here in Toronto. As you can see this is a bit of a different vlog. I am not here with Audrey. I’m going to visit my parents for 12 days just by myself. Our parents live in different parts of Canada. My parents live in Fredericton so I’m going to see them and yeah I’m just catching a flight here from Toronto. And I thought I would show you guys a little behind the scenes of what it is like to be in Canada in the winter.

I have no idea if I’m going to make my flight to Fredericton because there is a snow storm coming there. It is like snowmageddon. Hopefully I make this flight and when I arrive in Fredericton I will show you guys what it is like to experience a snow storm in Canada.

We got pizza with pineapple, we have pepperoni and we have bacon. More importantly we have a very important hockey game to watch.

Who is playing? Canada eh! Canada eh. Canada against the Czech Republic (Czechia) and if they advance to what the semifinals. They play Sweden. We’ve got garlic fingers on the side and Picaroons beer.

So we’ve got beer. We’ve got pizza. We’ve got garlic fingers and we’ve got Canada going for gold. We ended up smoking them and going to the Gold Medal game.

Look we’ve got Hobie the great to watch the game too. Hobie the Maine Coon kitty. We won! What do you think? One more notch in the gold belt.

Tonight we have another really exciting local match we’re actually going to a live game and watching a UNB game playing one of their biggest rivals here in Atlantic Canada Saint FX.

Check out all of the snow. Going snowshoeing we’ll follow the trail a bit, maybe break some of our own trail. This is like the quintessential thing to do in Canada in the winter.

The snowshoeing with my Dad was great. I’m in downtown Fredericton and I thought I would leave you guys with a few winter scenes.

This is part of our Travel in Canada video series showcasing Canadian food, Canadian culture and Canadian cuisine.