Why Mexico Is Richer Than You Think


Living in the United States, people grow up with the idea that life in a developing country is deprived of luxury. It’s a common misconception that those countries are less fortunate financially, and therefore they must be unhappy with their lives. Perhaps we should be able to see that fortune comes in form other than bills and coins.

From a distance, the living conditions in Mexico appear to be poor, but as you get closer and begin to interact with the people, you wonder if they are not in fact just as fortunate as those living the “American Dream”. Most families don’t have expensive cars or big fancy houses. Instead, they have home-cooked meals, family time, and generosity to offer from their hearts.

I had the opportunity to travel through Mexico in an unconventional fashion. Instead of the fancy 5-star resorts with all-inclusive bars and restaurants, I opted for a large tour bus with 7 sets of 4-tiered bunk beds, a tiny bathroom, and a kitchen miraculously equipped for cooking feasts large enough for 300 people. The big letters on the side of the bus read “Krishna Culture Festival Tour” and the bunks were filled with travellers – young and old – from all over the world; anywhere from Florida to California, from Canada to England. For 3 weeks this bus travelled from city to city all the way from the mountains of Monterrey to the beaches of Tulum, and back.

Every afternoon the bus would inch its way carefully through the narrow streets, squeezing between cars to find a place to park and begin the festival. The cities, like Monterrey and Mexico City, were buzzing with people – walking around, shopping in the markets, eating at street vendors – and cars zooming by honking loudly.

Other towns were much quieter, like the small Mayan village of Solferino, which was not too far from the well known tourist city of Cancun. The town had a courtyard in the centre with a basketball court and a communal trampoline, where the children played and the villagers lived close by. A narrow dirt road wound around the courtyard with almost no cars in sight. They had a small library for the villagers, although most of the adults were never taught how to read. They now had a school where the children were learning to read and write. There was only one tourist shop in the town – which no tourists ever stopped at, as the friendly owner informed us. Yet he was happy with his simple life, growing food on his land and opening a school to teach the children English.

Whether it was the hustle and bustle of Monterrey, or the quiet town of Solferino, the bus would park, the underbody storage compartments would open, and everyone would begin unloading sound equipment and play props, moving as seamlessly as a well-oiled machine. As soon as the bus cleared out, the one-woman kitchen staff would light up the stoves and begin preparing a traditional Indian feast for hundreds of people.

As the stage gets set up and the performers get ready, the courtyards begin to fill up with curious locals, coming to see the Festival of India. It begins with traditional Indian dancers, followed by a pantomime play.  Next comes the musicians, and together they sing a melodious chorus of kirtan – music for God. They teach an ancient mantra meant to destroy the impurities of the heart, in a ‘call and response’ fashion. This is really where we could see the magic of Mexico shine as brightly as the sun.

Many of the local people in the crowd come from traditional Catholic families. Most have never heard this sanskrit mantra before, yet they fill the seats, close their eyes and open their hands – willing to receive what we are offering. We presented a culture that is completely foreign to them, and they simply sit with open hearts and open minds, willing to absorb themselves in this new experience.

As the music begins with a slow rhythm, the crowd sings loudly with us and we can see some people with tears in their eyes. Soon, the music begins to speed up and everyone becomes absorbed in the transcendental jam session. The locals jump out of their chairs and join us in ecstatic dancing, spinning and laughing. Many times the children run onto stage to dance with us and we pick them up, playfully spinning them around. Never do the parents show any distrust or concern.

After the music comes to an end, the free feast is served while the book table becomes swarmed, night after night, with people of all ages curious for knowledge. The locals and the travellers sit together and share anything from philosophy, to recipes, to a simple smile.

Gratefully, Mexico receives this festival with warm-heartedness, year after year. They welcome us into their towns and cities, and we welcome them into our hearts. Many of the travellers say that once you’ve experienced a festival in Mexico, it will never be forgotten.

Although the people we encountered in Mexico didn’t have much in the way of material belongings, they did not hesitate to share what they have. Multiple generations within a family will spend time together on a daily basis, sharing stories and insights on life. Witnessing this, you can’t help but ask yourself, what is the definition of fortune? In the United States, almost everyone has advanced technology and a comfortable home, but how many of those homes have a dinner table inside where 3 generations of family gather around daily for a home-cooked meal? How many mothers are able to stay home and spend the first few years of a child’s life intimately raising them before sending them off to school? How many strangers on the street will stop what they’re doing to sing and dance with you?

Mexico is not rich in comfort, convenience, or copiousness. But it is rich in culture, rich in curiosity and open-mindedness, rich in kind-heartedness and generosity. I would never want the people of Mexico to see themselves as less fortunate than their northern neighbours, because they have fortune that many of us dream to see the likes of.

If you are thinking of travelling to Mexico, find a way to appreciate their authentic lifestyle and the substance that exists there that can fill your heart. Skip the all-inclusive resorts and instead look for an out-of-the-box way to experience Mexico for what it really is. Everyone can benefit from associating with such good-hearted, friendly people. Sometimes we just need a change of perspective. 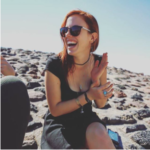 Krsna Jivani is a lifelong bhakti yogini who, at an early age, developed a curiosity to discover alternative ways of life other than those of the American/Canadian society she grew up in. She always believed that you can create any life you dream of, and seeing a large variety of lifestyles along her travels has confirmed this. With a strong refusal to settle for anything less than extraordinary, she continues to manifest her dreams. Follow her journey in Instagram .