Installation of laminate floors is a simple job; they can cope with it, even without special skills. However, the laminate laying tool is a factor that cannot be dismissed. In most cases, its presence affects the speed and quality of editing, but sometimes it becomes critical. To prolong the repair, it is advisable to think over what equipment to prepare and what can replace it.

Each step of almost any work is divided into several operations. Considering that there is no utterly universal equipment for a specific function, you need your tools. Therefore, before looking for something, choosing and buying, it is worth making an action plan.

The stages of laying the laminate are as follows:

Surface preparation often boils down to cleaning the concrete screed to remove defects. It assumes its own set of devices that are not related to the laminate. If the base is flat enough, as a rule, it is primed and covered with a substrate. To spread the backing, just one knife with retractable replaceable blades is enough. However, further work will require more specific equipment.

The master makes many measurements “by eye” or “in place,” applying the panel to the desired point. As a decision, it saves a significant amount of time without sacrificing quality. After all, a plinth will hide the majority of the cut edges so that a half-centimeter inaccuracy won’t matter. However, it would be best to have a good idea of ​​what and how should be cut off for this. A measuring tool will be needed if the contours have a complex shape or the end face remains open.

Most often used for this:

The markup is usually done with a pencil or marker. To improve accuracy, it is advisable to consider the thickness of the lead (rod) and make the marks thin and accurate. And often, they have to be redrawn, so you should not put pressure on the pencil. By the way, for the same reason, a professional installer tries not to use ordinary markers or felt-tip pens.

Tape measure and square are simple popular tools often found on the farm. Their features are associated with the manufacturer’s brand and are necessary only for large volumes of work or in exceptional cases. However, some of the features are still quite useful. For example – the holder of the measuring tape of the tape measure, as well as the guides for marking the angle of 45 °, provided for by the design of the square. Nevertheless, an amateur tape measures 3-5 meters long, and any square, even a school one, will go for home.

Template for adjusting laminate in width 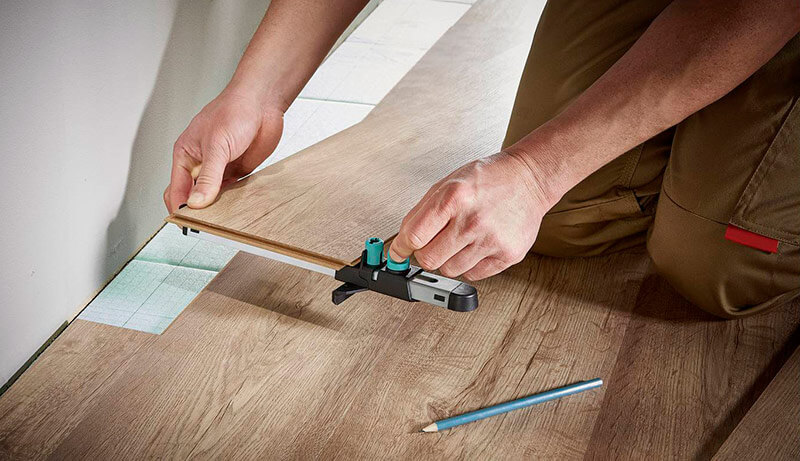 Fitting the last row (longitudinal marking and cut) sometimes causes difficulties, especially for an inexperienced artisan. Their reasons are the need to consider the expansion gap, the curvature of the walls, and the likely confusion associated with the location of the end locks. A fit-to-width template is a laminate flooring tool that overcomes this problem. It is a rigid rail about 300 mm long with two moving carriages. One of them is a guide, and the second is a marker, with a hole for a pencil and a retainer.

If the template is not at hand or in the store, you can cope without it. But in this case, mistakes, damage to the material, waste of time are likely. The panel is laid face down for this work, pressing it against the wall, considering the gap. Then, focusing on the edge of the laid row, they put marks at the ends of the board. All that remains is connecting them using a long flat strip or other panels and then seeing off. Before sawing, attaching the lamella to the wall is advisable, imagining what it will be like after cutting.

Pipes and other elements protruding from the floor significantly complicate the installation of the laminate. After all, grooves need to be cut out for them, which are not always possible to disguise. But first, you need to mark them. This problem is solved using a template for copying the contours.

The template consists of two flat strips connected “flat” but with a gap. The gap is filled with thin plates at the ends that can move. Also, the device is equipped with a plate retainer and a guiding beacon that serves as a guide for transferring lines.

There is no complete replacement for this device. Therefore, if it is absent in the nearest store, you will have to mark the grooves “by eye.” Sometimes a cardboard or paper template, adjusted “in place” due to several attempts, helps.

Cutting and processing tools for laminate

Sawing, trimming, grooving, and drilling planks is perhaps the most time-consuming part of the job. Probable difficulties are associated with those places that will remain open, for example – near pipes or door frames. This is why the availability of cutting tools is so important. 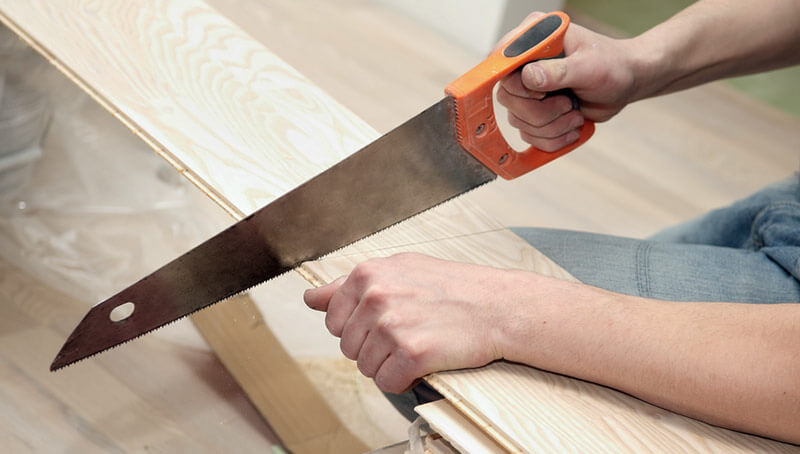 Since the laminate base is similar to wood, it can be cut with an ordinary hacksaw. However, a large-toothed saw will chip off the laminate, spoiling the appearance of the lamella. A fine-toothed “spike” is used for this work, which has a weak, almost invisible, set of teeth. The edge is clean, and the wide hacksaw blade contributes to a straight cut. But low-quality studs cut hard, quickly dull, so you need to buy an expensive model. 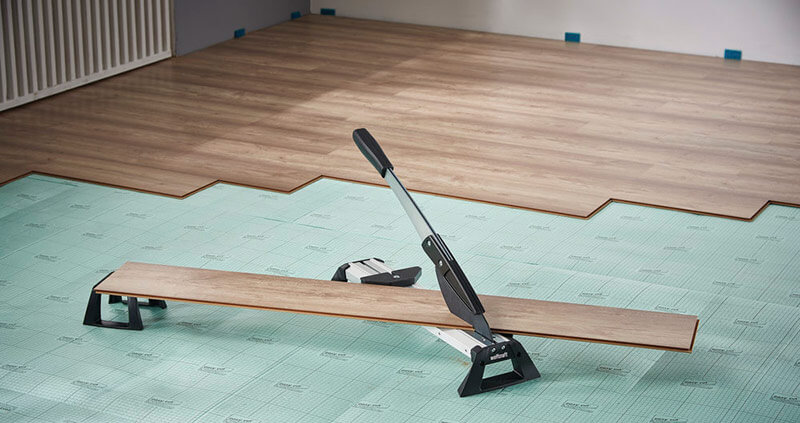 There are two modifications of laminate cutters – a “hybrid” tile cutter and a guillotine, as well as a “clean” guillotine. The first option is suitable only for cutting panels across and practically does not deserve attention. But the guillotine copes with the work efficiently, naturally, quickly, cleanly, and silently. 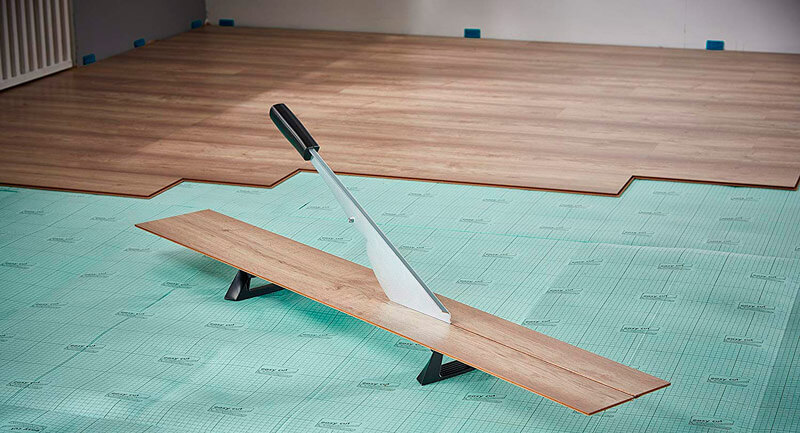 It is a frame about a meter long, at the end of which a broad, rising blade is fixed. Small teeth run along its edge, and a long lever handle is set on top. The handle is raised with the knife, and then the panel is placed and pressed with even force. In this way, longitudinal cuts can also be made. 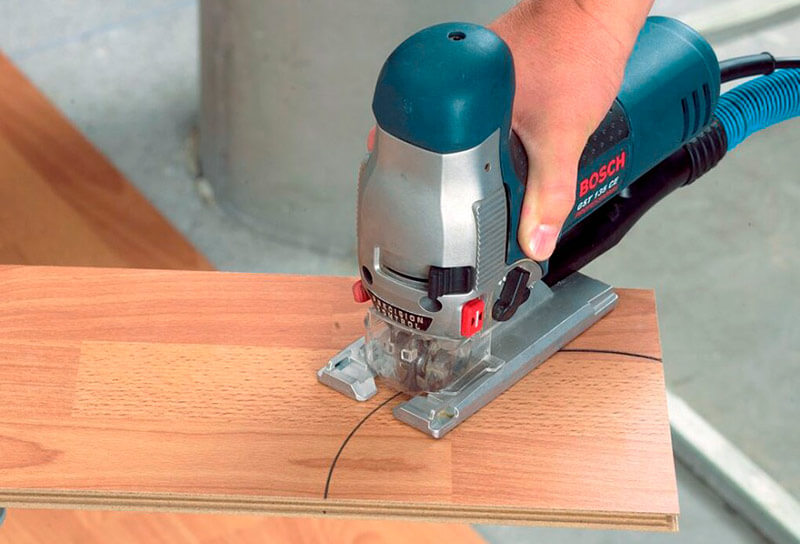 For sawing wood blanks up to 5 cm thick, the electric jigsaw is the most preferred equipment. It is a compact body with a convenient handle, button, and saw attachment mechanism. The saw makes translational movements, which is why sawing occurs.

Features of working with a jigsaw:

Jigsaw modifications are equipped with a pendulum mode, backlight, speed control, and other “chips.” The most helpful addition is the pendulum mode. This is a sign of the “professional belonging” of the device because it is rarely found on cheap household samples. Its meaning is that the file moves up and down and a little back and forth. Thus, productivity rises sharply, but the quality of the cut decreases. True, it is turned on by the regulator. Therefore it is not always applied. 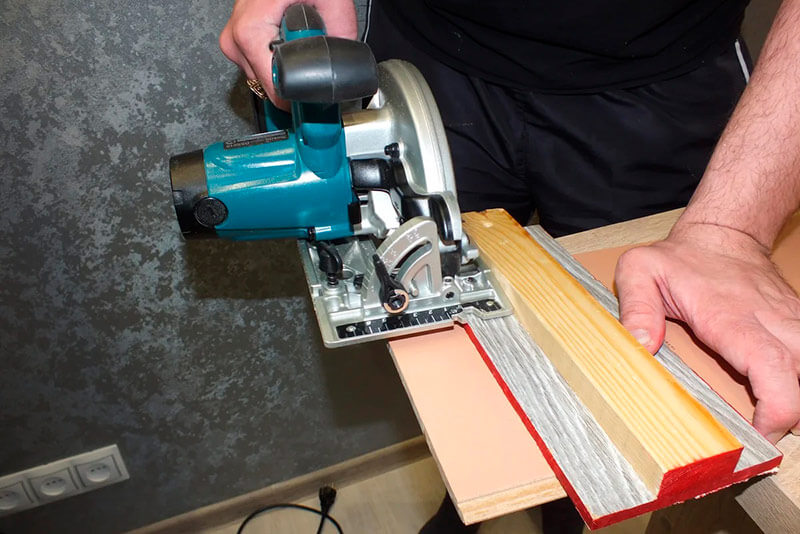 The hand circular saw (“frog”), as well as the floor “cross-cutter,” are popular carpentry tools. Their operating system is based on rotating a toothed disk covered by a protective cover from above. These units, as a rule, are very noisy, and dust from them flies in all directions. Therefore, their design often provides a branch pipe for connecting a vacuum cleaner. The disadvantages of circular saws also include the impossibility of curly cuts and great danger. But the amount is as fast as possible, and the cut is perfectly straight and without chips. 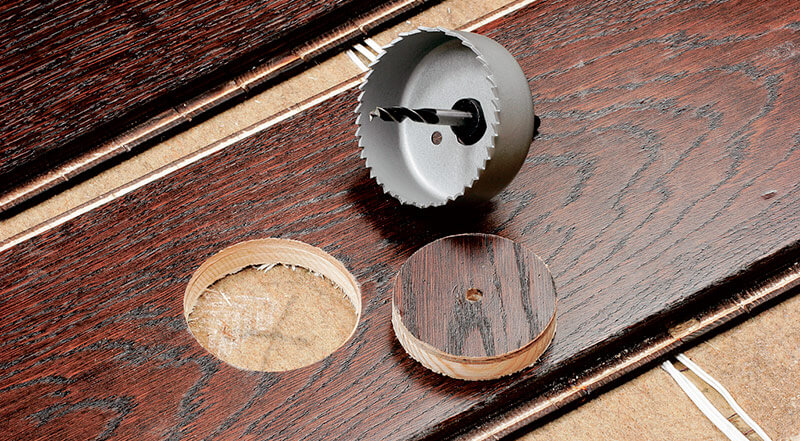 Drilling any boards or panels is a simple, quick job. When laying the laminate flooring, it is required when grooves for pipes or other holes are needed. True, they can be cut with a jigsaw, but this will take much longer, resulting in worse. In addition, if the markings are made accurately, adjustment after drilling is not necessary.

Extruded wood fibers can be drilled with any drill. However, you need to consider the size of the holes, which can sometimes be significant. Then it is advisable to use a feather or core drill. In any case, the edge will be of high quality. 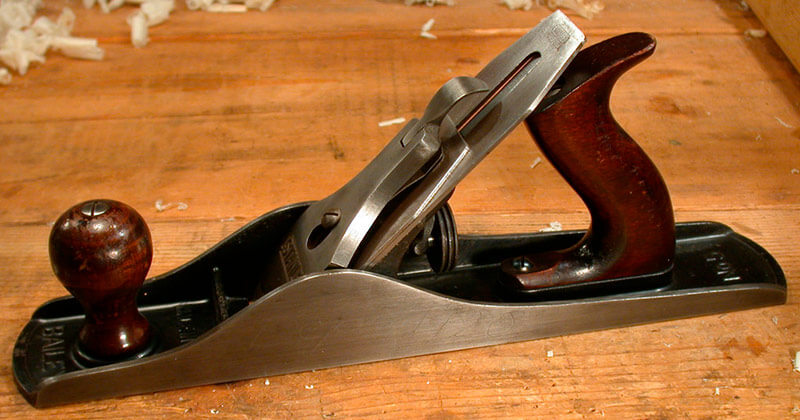 The well-known plane is an optional accessory. However, fitting cut ends is greatly accelerated and simplified when it is at hand. In addition, they can be chamfered if the edge is left open and cut off the lock. Sometimes only he interferes with the installation of the panel, and sawing off the wave with a jigsaw or, even more so, with a circular one is an extra hassle.

The complexity of the installation depends primarily on the quality of the material. Ideally, the boards should be assembled without using the “shock” technique – inserted at the right angle, lowered, pressed down. If done correctly, mounting even inexpensive samples requires almost no hammer.

However, it is worth preparing the entire set:

Wedges are spacers between the laminate and the wall, the thickness of which determines the width of the expansion gap. They can be factory-made plastic or homemade from any material, the same trim panels, for example. But factory products are still more convenient. After all, their shape allows you to change the gap quickly, and they do not fall out and do not move. 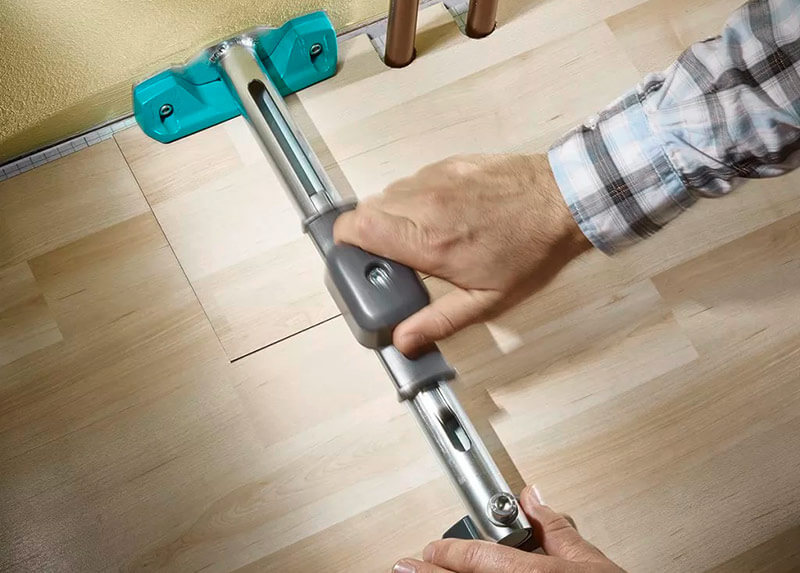 Clamps, in this case, are devices designed to seal panel joints. They are different, but two modifications are popular – with suction cups and with belts. The first option is “gluing” the suction cups to the second or third row from the wall, emphasizing the gap, and tightening the rows. 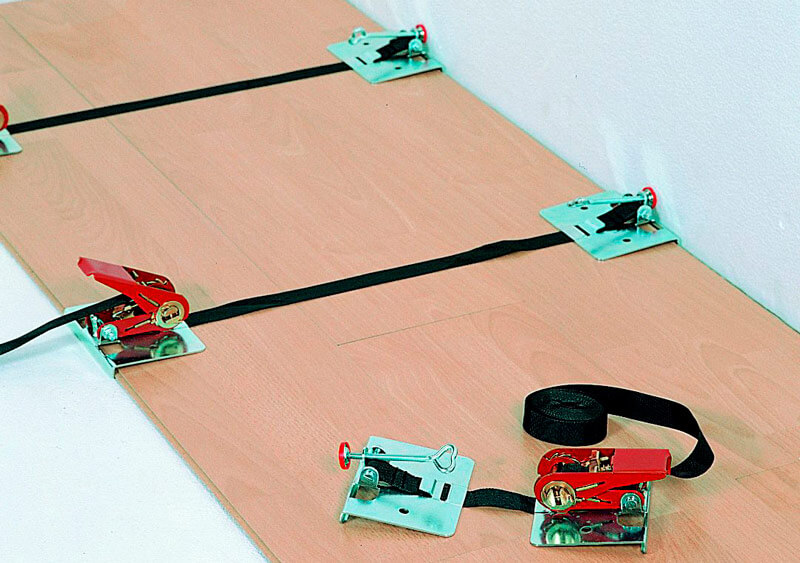 The belt clamp resembles a conventional winch. There are stops at both ends of the belt, and between them, there is a tightening mechanism. By installing several such devices, you can rigidly compact the entire laid covering. Thus, gaps in the joints will be practically excluded. 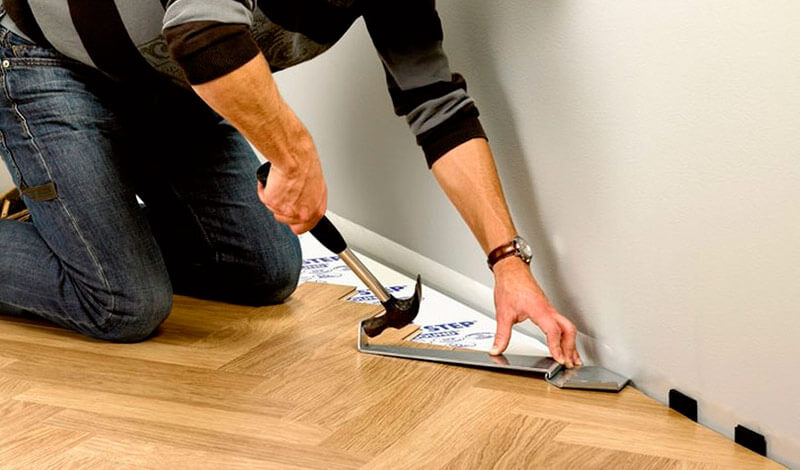 The staple is sometimes referred to as a clamp, although the principle of operation here is entirely different. It is simply a Z-shaped steel plate, one bend inserted into the gap, and the other is hit with a hammer. Thus, the joint closest to the wall (longitudinal or transverse) is qualitatively sealed. Brace advantages: compactness, simplicity, efficiency, speed of use. 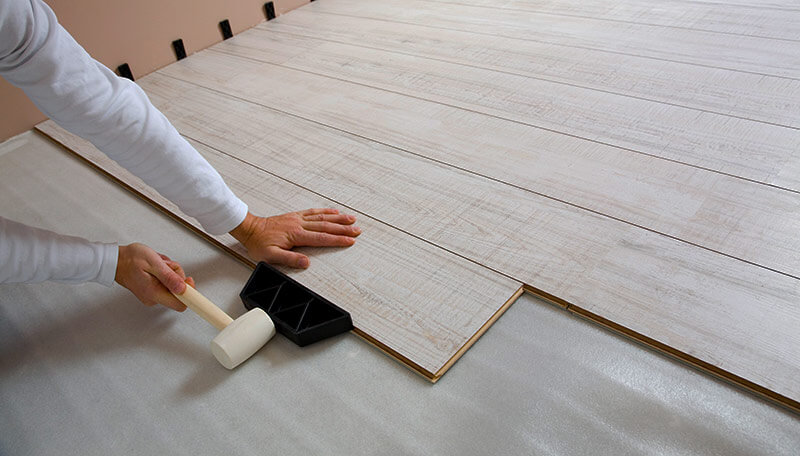 The impact block is a compact device that allows you to strike the laminate from the end without leaving damage. Its edge joined with the panel lock is similar in design, so the pressure is evenly distributed. These bars are made from hardwood or durable plastic. Homemade replacement – a piece of the lamella, the shape of which fully or partially corresponds to the place where it is applied.

The well-known hammer is a useful universal tool. Of course, it is not worth striking them on the lamellas, but you can use gaskets, bars, etc. The mallet is not very convenient here – because of its massive shape. On the other hand, an accidental blow will most likely leave no damage.