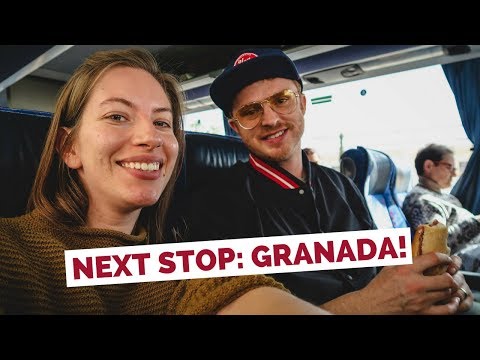 Join us as we travel from Valencia to Granada by bus as part of our Spain travel vlogs series. We kick things off with an apartment tour of our airbnb in Valencia, Spain which featured an incredible view of the central market. The place was overall good but at times felt a little small for 4 adults and I think would better suit 2-3 at max.

After a bit of confusion and disorganization arranging taxis to the bus terminal in Valencia we finally arrived and chilled out at the station for an hour before boarding our bus to Granada. The journey itself was really scenic but quite long considering it took 8.5 hours to arrive in Granada. Along the way we stopped for a quick bite in Alicante and the highlight for us all was passing through the mountains as we approached Granada and being mesmerized by all of the snow.

Good morning guys. We are here in Valencia, Spain at the moment. We had a brilliant five nights here.

I think out of all of the places we’ve gone so far with my parents this maybe the favorite spot. And I think the big reason was because we had the Central Market. Yeah. Right outside. We’re going to show you the views.

We’re going on a long trip to Granada. 8 hours on the bus? Something like that. It is going to be a long trip. But before we do that we’ll give you an apartment tour of our place here in Valencia.

Without further adieu let’s check out the views. I’ll open the door for you.

We absolutely loved the market. It had a very local vibe in the sense that there was lots of produce and meat being sold. Prices were really reasonable. And we ended up going there everyday that it was open.

Right now it is ten thirty. We’ve got a bus to catch at 12 so we should probably head out the door. We’ll pick things up again at the bus station before we board the bus to Granada.

Now we’ve got an 8 hour bus ride. Well yeah and I’m going to be sleeping a lot on this bus ride. I bet. I think we all are. I’m full as a tick from breakfast. Super omelet. You made us a huge omelet with all of the leftover ingredients. We’re all full. We’re not even picking up any baked goods. No. We’re still digesting brunch. We’re good. We’re good.

We’ve been on the road a few hours. It is 2 and a half now so our first stop here is Alicante. Actually there was another quick bus stop but we couldn’t get off. Benidorm. Apparently this is going to be our only stop to eat. We only had 20 minutes so I went and grabbed some stuff. Got some chips. I got some vanilla wafers. Cookies. Vanilla cookies. Iced tea. And then the best part is that a jamon sandwich. Oh those are good. A nice meat sandwich so we are all set. We’ve been eating lots of those. We’re all set and that should tide us to Granada where we hope to get a proper dinner when we arrive. Yes, we’ll be ready for that.

Alright guys. We finally made it to the apartment. What is it like nine thirty pm or 10 pm?

Tired. I’m already in bed. I’m under the covers. On the computer. I’m done. We’re going to watch Star Trek. Yeah. That is how we’re going to end our day. But we will have some more really cool videos we hope from Granada soon. We’re going to make travel food content and yeah we just need to rest and get a good night’s sleep. We’ll see you on the next one. Thanks for watching. Bye.