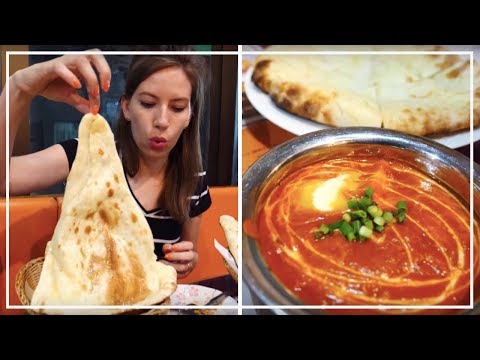 Come join us as we try Indian food in Tokyo, Japan. It had been a while since Audrey and I had Indian food so when we noticed a few Indian restaurants in our neighbourhood that we were staying in Tokyo we jumped at the opportunity. The Indian restaurant we decided upon (Milan) ended up specializing mostly in North Indian Food and we decided to go for a variety of different curries, naan breads, samosas and chicken tikka. The following is a list of the Indian dishes we tried at this restaurant:

Our overall review of trying Indian food in Tokyo, Japan was positive. We found the curries to be rich, spicy and savoury while the naan was massive, buttery and crispy on the outside and gooey in the middle. In terms of price point it came to just over 4000 Yen in total which was roughly $13 US dollars per person. We thought that was excellent value considering Tokyo is an expensive city.

Restaurant in Tokyo address and hours:

We actually have two Indian restaurants right across from each other. We can already see all of the different curries. Vegetable curries. Chicken curry. Check out that menu. Butter chicken. Lots of naan. We’re going to get after it. Samosas. Lots of choices. This is looking good.

We’ve decided on samosas and chicken tikka so far. We need some curries for sure. I need a vegetable curry. Oh I like the paneer.

One vegetable curry and the other one you wanted paneer butter masala.

Here is a cheese naan, a butter naan, a garlic naan, a vegetable curry, a spinach one and a paneer butter one. And then there is a chicken tikka and there is samosas.

That was an official feast of feasts. That cheese naan was deadly good. Anyways the price was 4,450 Yen roughly about just over $40 US dollars so you’re looking at $13 US to $14 US dollars per person for that entire meal. That included chicken. That included samosas. Three different curries. Three different naan breads. Yeah, that is outstanding value. You know this is an expensive city Tokyo. And to get good authentic Indian food for $13 US dollars per person. Yeah, that is a steal. Anyways we will see you with more food and travel videos from Japan. Ciao for now.

This is part of our Travel in Japan video series showcasing Japanese food, Japanese culture and Japanese cuisine.