Nestled in the peaks of Romania’s Southern Carpathian Mountains and in the Transylvanian region, is the city of Brasov in all its baroque, gothic and renaissance glory. Roaming through Sfatului Square, the towering Gothic Church and the instagramable Rope Street, believed to be one of the narrowest streets in Europe, should keep you entertained for a brief few days yet there’s more to Transylvania than meets the eye.

Besides the city of Brasov, the villages, towns and forests that surround the region are equally as worth it to be explored. Here’s why Brasov is a great base and what not to miss out on during your next trip there.

Famously and falsely known as Dracula’s home, Bran Castle is a hot spot for tourists. Sorry to crash your childhood dreams but Vlad the Impaler (the inspiration behind Count Dracula) only actually spent a few days at Bran Castle after being captured. The Castle adopted its spooky connotations for its eerie appearance that simply matched Bram Stoker’s description in the novel. 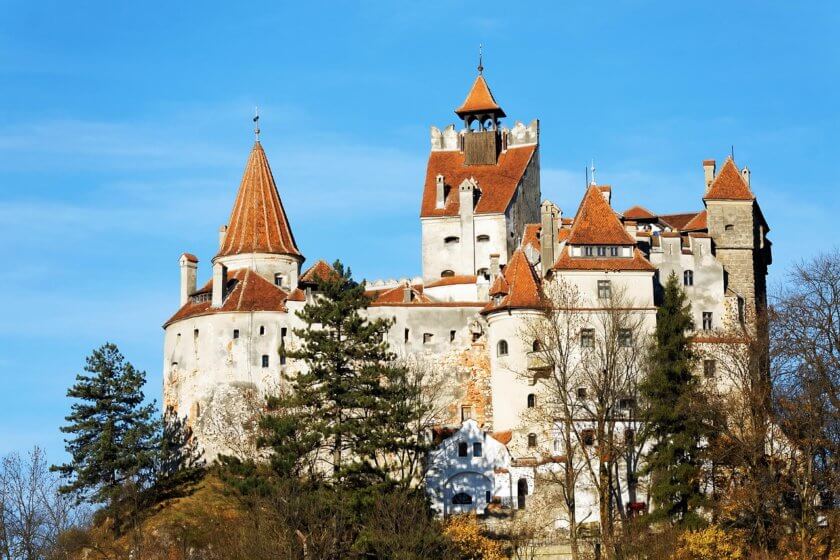 But don’t be discouraged, it’s still a sight to see and a national landmark. Situated on a hill an hour away from Brasov, the views from the top show just how vast and beautiful Romanian nature is, a pleasant surprise for me to discover on my trip there. There are loads of rooms to explore with an indoor yard that kind of reminded me of Rapunzel’s tower. Yeah, it’s a bit of a mix up on childhood tales yet a must-visit place.

The lush green gardens will also hit the spot and you can sit at the restaurant for a meal or a drink surrounded by ghosted tales. If you really want to get closer to Vlad Dracula, Sighisoara is where you should head.

This is Vlad the Impaler’s birthplace yet the town is far beyond creepy vibes and pointy tips on houses. In fact, arriving at Sighisoara’s centre, you’ll be surprised to see warm yellow, pink and blue walls and colourful flags decorating it. It almost felt we weren’t in Romania until we hit the largest cemetery I have ever seen that seemed endless and just how you’d imagine Romanian cemeteries to be: ancient, gothic yet serene. To find it, climb up the covered staircase to the town’s school and church, the cemetery is situated just behind there. 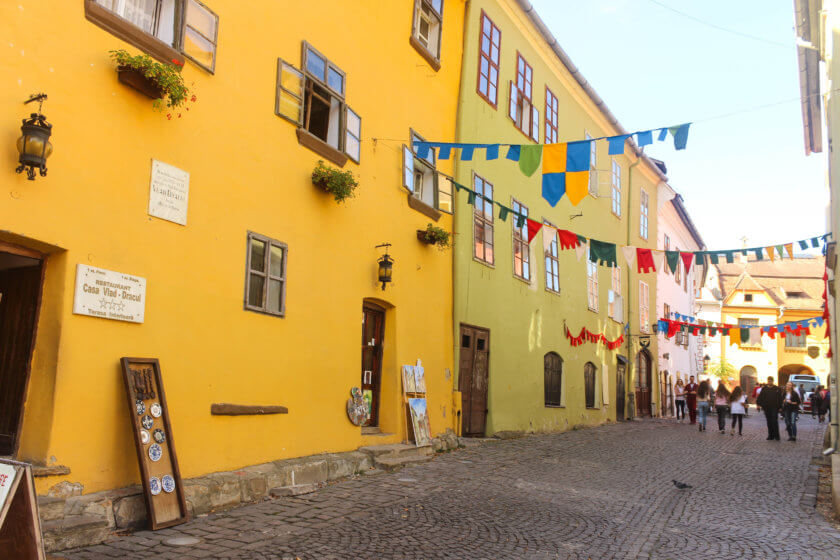 Travel guides will tell you to visit the Clock Tower and Torture Museum and Weapon Museum and by all means, do so, but even a mere walk in Sighisoara’s pebbly streets will do the trick. A fully pedestrian centre, it’s easy and safe to get around this UNESCO World Heritage site. It’s so small that an afternoon will do and don’t worry about the two- and half-hour train ride from Brasov, the countryside views will entertain you.

A lot closer to Brasov is Rasnov only 25 minutes away. An even tinier place, that seems quiet all year around. Why should you go? If the words Bear Sanctuary don’t tick any boxes, I don’t know what will. Over 70 once-captive bears live in the oak and hazel forest between Rasnov and Zarnesti and you can catch a glimpse of their life with organised guided tours.

If bears aren’t your thing perhaps dinosaurs are. Dino Parc has 47 life-size statues of dinosaurs, a 9D theatre and a museum exhibit to explore as it’s the only dinosaur theme park in Romania. 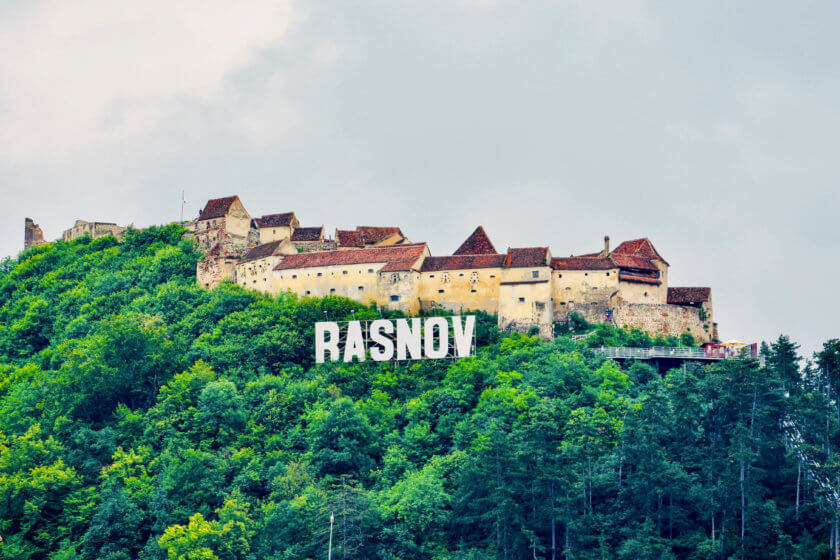 Another activity to do in Rasnov is to visit the Fortress on top of the hill, above the Hollywood-like Rasnov sign. To reach it, you’ll take a cable car while you rise above even more Romanian countryside. The fortress dates back over 700 years and whether you’re a history geek or not, you’ll admire its strategic defence point and of course the ceaseless forest views.

For another castle fix only an hour from Brasov, Peles Castle is a great option as with its German neo-Renaissance architecture its thought to be of the most stunning castles in Europe. And not only that, it was the first European castle to have electricity, quite the thing for 1883. There are a plethora of corners to explore inside and each room is ornamented in a different style with inspirations from various countries. 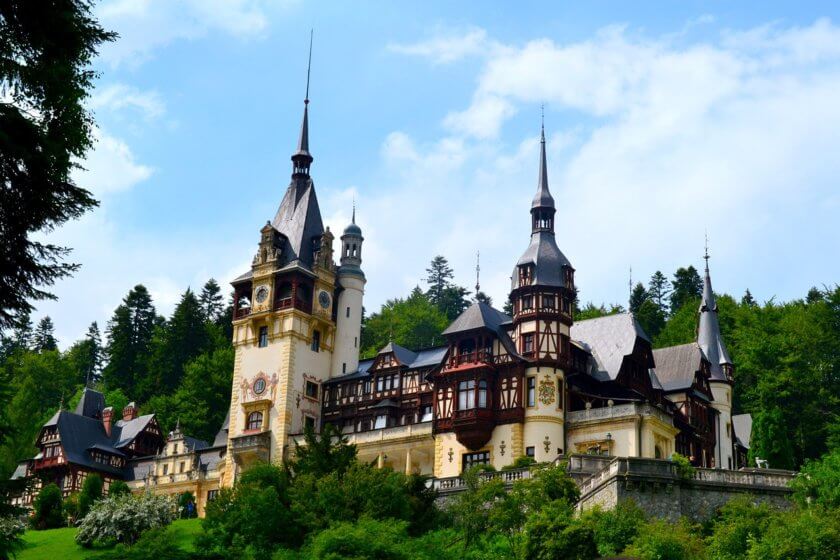 Explore the Music Room, the Concert Hall, the Turkish Salon, the theatre and the Royal Library with a secret door. The exterior is as grand as the interior and the castle’s pointy tips will certainly catch your eye.

Mainly a winter resort, so it’ll be a ski paradise if you go in the colder months, Poiana mountains offer more activities than just gliding down icy slopes. We had gone in October, still crispy but sunny and snow-free. Took a twenty-minute bus ride from Brasov to go horse-back riding in Transylvanian forests and it was as enchanting as it sounds. Being autumn, the trees were a thick pallet of orange, purple and yellow and the crispy leaves cracked as we rode through nature. 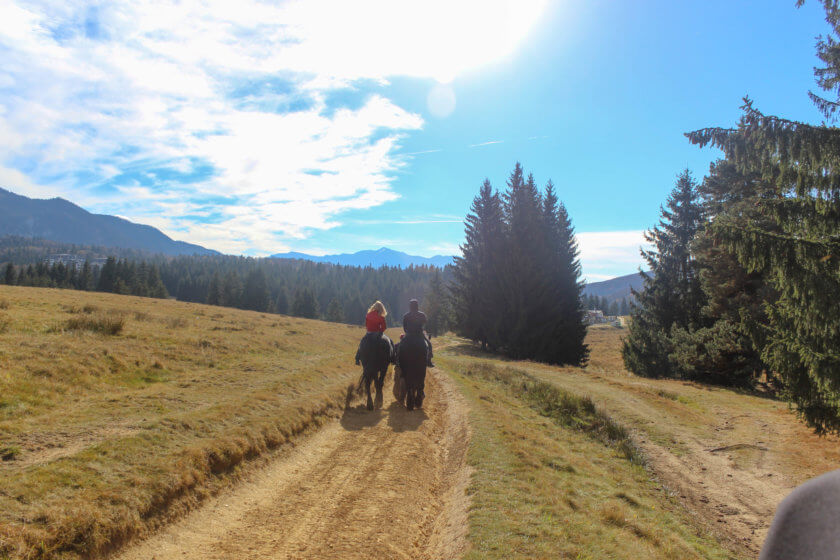 I’m pretty certain you’ll find an activity to do all year round be it hiking or lounging at the grand, wooden hotels. There are also plenty of restaurants to try out the local cuisine. We chose to avoid the crowd-pleasing ones on the main street and headed to a traditional and heavily-decorated one in the woods called Coliba Haiducilor. The food tasted homemade but it’s the décor that steals the show.

Yes, there’s a lot of nature involved in Transylvania and its suburbs and it just goes to show that the region is a lot more than just spooky tales and gothic architecture. It’s all about wildlife at the Piatra Craiului National Park and its 25km-long limestone ridge, that’s the biggest in the country. 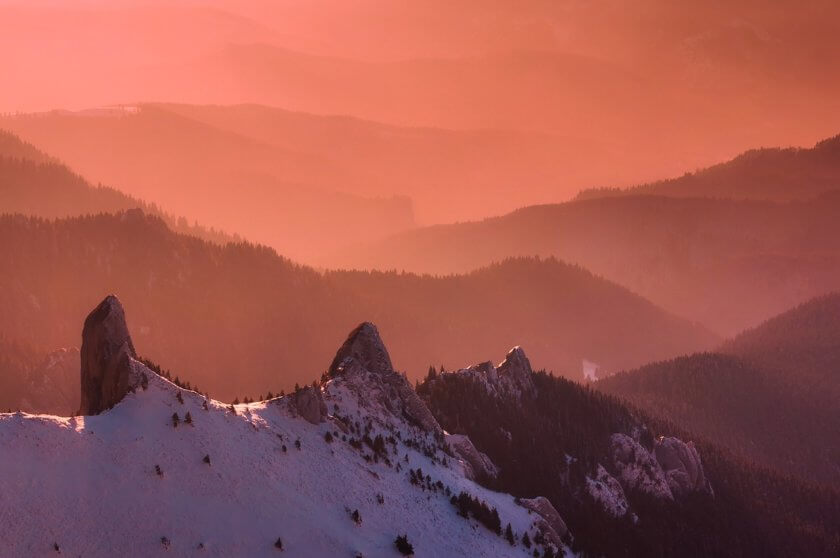 If you’re into hiking and discovering local flora and fauna, take on the trail and you might get to see wolves, bears, deer and bats, not to mention stunning views of glacial lakes. It’s no wonder the park is considered one of the most beautiful places in the Carpathian Mountains. Along the way, traditional villages make an interesting stop and insight into local life. So, for just an hour and forty minutes away from Brasov, you’ll be tracing Romania’s landscapes.