This is why you should use Tinder while you are traveling


I had downloaded Tinder many times in the past, I swiped left and right and enjoyed chatting with guys but when the time came to meet in person, I always got too scared and chickened out. Following that, I deleted the app.

I am an introvert and shy, so it is always much easier to talk to someone new by text. The thought of meeting a total stranger though, and going on a “date” was just too much for me. But meeting guys in other ways was never easy for me either.

In the past, I met the guys that I dated because we were in school together or worked together. We were in an environment that created a prolonged time to meet and break the ice. It is a totally different challenge to meet people while traveling, especially in hostels. In fact, even the thought of going to those crowded communal kitchens and cooking by myself gives me a bit of anxiety. That is why when I read an article that claimed Tinder was a good way to meet people while traveling I saw it as a sign. I decided to go on a Tinder travel date, once and for all.

I downloaded the app, chatted with a few guys and connected with a guy from Spain, who was also on a working holiday. Soon I found out that he was planning a road trip around New Zealand’s north island, from Auckland to Wellington. That’s when my “extreme” side kicked in and I asked him if I could come along.

Before I had even met this guy, we were already planning a road trip together. And, I know, in retrospect that was a bit careless. Luckily, there was nothing to worry about. After agreeing on the road trip, we met up a few times to get to know each other (in public places, of course) – turns out he was a fantastically normal guy; and sweet on top of that!

I was surprised to find that it was actually not such a big deal to meet my Tinder date. All this time I was so scared of that moment, only to find out it was just like meeting a “regular” person for the first time. It made me realize that some fears are just in my mind. That realization was actually quite empowering, because I now feel like a lot of other things I fear might not be so bad after all!

The road trip itself lasted 6 days and it was sincerely the most fun that I have had while in New Zealand. Our itinerary included Coromandel, Tauranga, Rotorua, Tongaporutu, New Plymouth and Wellington. Some of those places I had actually gone to already by myself but experiencing it with someone else was almost like they were completely new places.

At Hot Water Beach we dug a hole together to make our own beachside spa, something that I was too shy to do when I went there by myself. Even though it was winter and freezing cold we tried dipping into the “spa”, but despite the name the water was also freezing cold!

In Tauranga he taught me how to cook delicious Spanish dishes and after dinner we went for a night time walk by the beach, under a full moon. It couldn’t have been better even if we planned it.

In Tongaporutu we ran into a little unscheduled delay when we found out that we had to wait for 4 hours for low tide in order to see the “3 sisters and elephant rock”. We met a local couple who entertained us with their stories and a really cool German girl who made us coffee in her campervan – the time flew by quickly.

In New Plymouth my tinder date and I spent almost 2 hours in Te Rewa Rewa bridge playing with my DSLR camera because we discovered how to take light photography. It was so much fun, I felt like we were kids again. I had the most romantic moment when he surprised me by writing my name in light! What I would give to live that moment again.

Our final destination was Wellington. We said our goodbyes as he stayed there and I left to go back to Auckland. Somehow though, it felt wrong to say goodbye already. I felt like I was stopping the adventure midway.

And so, I decided to move to Wellington too! Unfortunately, it was just for a month to be with him for a little bit longer before he heads back to Spain, and I to my already planned trip to Australia.

For the first time in my life I actually moved in with a guy. I know so quick right? We stayed in a cheap hostel room, and for a month we shared everything. He taught me more Spanish cooking and we explored Wellington together.

Living with a guy was another thing I was scared about, yet once I actually did it I found out that it was not bad after all. In fact, because I was with him I did things that I usually wouldn’t feel comfortable doing, such as cooking and socializing in the hostel kitchen – turns out it’s so much fun. Or going to bars and clubs with our fellow backpackers – turns out that’s even more fun! I felt like for the first time I was experiencing what it was like to belong to the backpacker community, instead of just staying cooped up in my room.

Now he is back in Spain, and I am still in New Zealand but we text every day. A long-distance relationship with such a time difference is not easy, but we are working on it and I already know what my next working holiday destination is: of course, Spain. 2018 will bring me my first ever trip to Europe.

If I learned one thing from all of this, it is that Tinder is actually a great app to meet people while traveling – romantically or not – and that a lot of my fears are actually nothing to be scared about!

If you want to do something but feel scared, just go for it – life might surprise you. 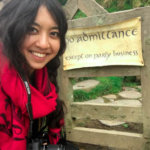 Wanderlady is a Japanese-Honduran traveler and acupuncturist who writes about her travels, life, and acupuncture remedies in her trilingual blog (English, Spanish and Japanese). You can read more about her adventures at , and follow her on Instagram or !