The Travelettes Itinerary: Hiking in Patagonia

“Don’t ask about the weather forecast, it’s Patagonia” is scrawled on a sign outside one of the campsites on the W-trek.

I first saw Patagonia on Pinterest. I can’t remember what I was searching for. But I remember the mountain. Ice capped, mythical, surrounded by water tinted a shade of blue all its own. But there it was amid recipes for banana muffins and vintage swimsuits and inspirational quotes in Helvetica. And now here I am, years later, standing spellbound in front of that same mountain.

Patagonia is magical. Images on a screen can never do it justice, so here’s a two-week itinerary to help you see it all for yourself. 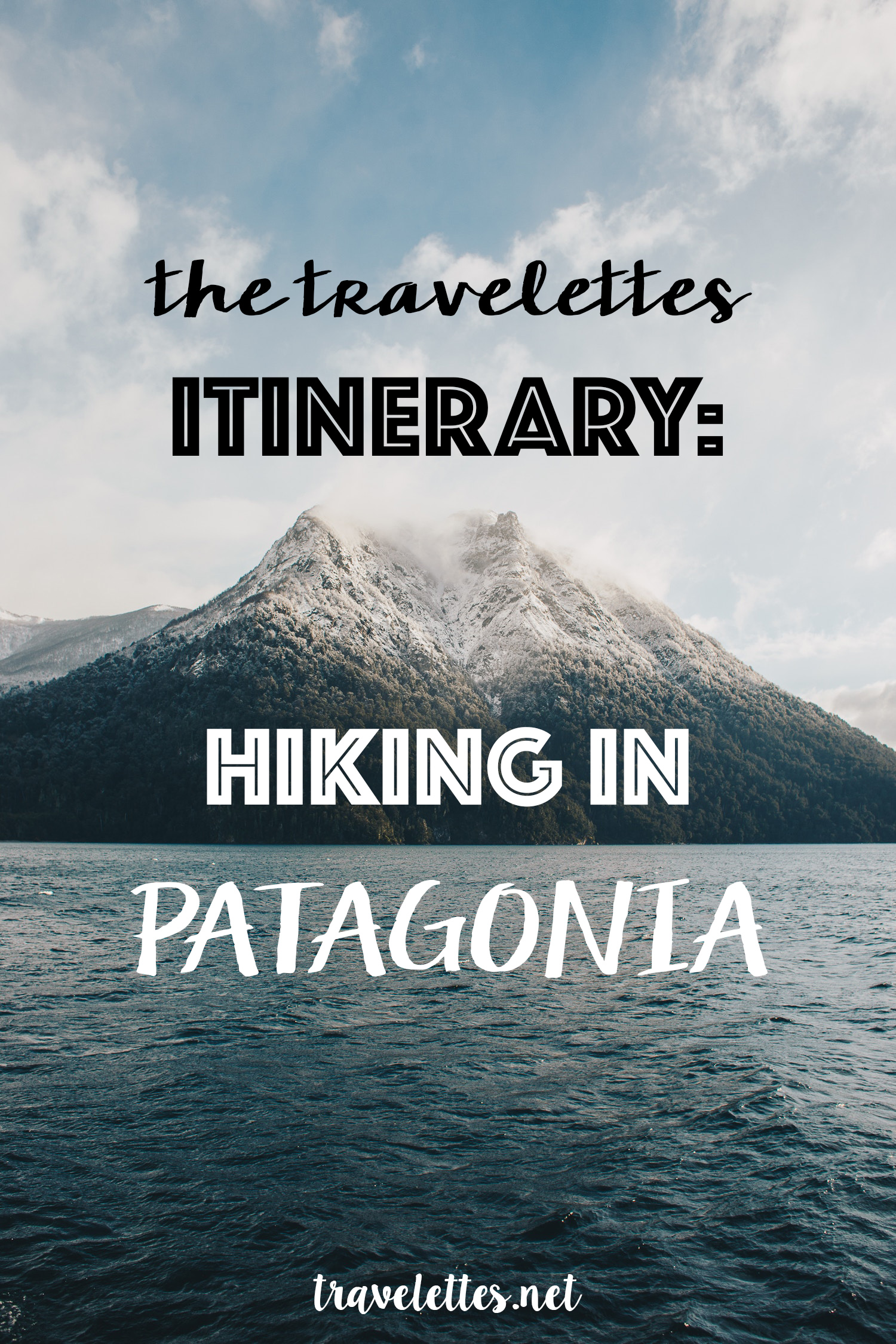 I landed at the airport in El Calafate in the Santa Cruz province of Argentina. Unless you’re prepared to do a long bus ride (2 buses and 41 hours from Buenos Aires) flying is the best option, even though domestic fares are higher for non-Argentine nationals.

After the searing heat of the city, it was a delight to arrive in the temperate climate of El Calafate. It’s a cute little town, although very touristy, especially in high season. As it’s located between El Chaltén and Torres del Paine, you’re very likely to end up stopping over here. I’d recommend having dinner at restaurant Don Pichon, which has great views over the town. At the restaurant you can see whole lambs cooking over an open fire. Try the Calafate berry ice cream! According to local legend, if you eat the berry, you’ll return to Patagonia. 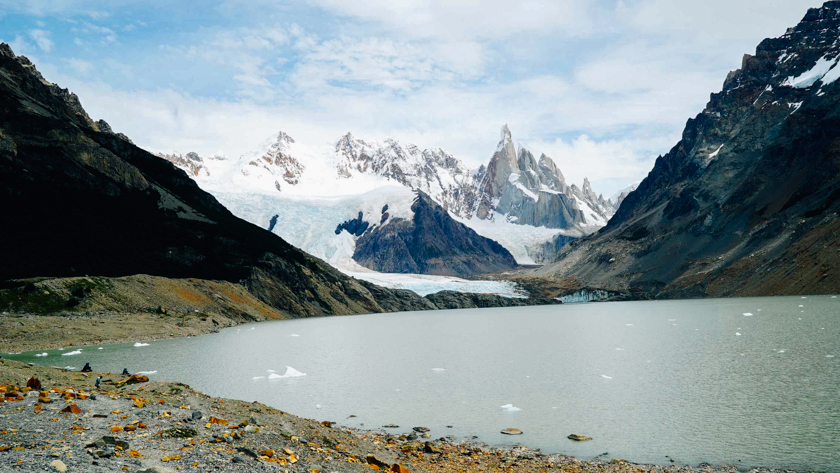 From El Calafate, visit glacier Perito Moreno, a trip that the friendly owner of my hotel described as “mandatory”. He wasn’t wrong. This immense glacier covers an area of 250 km2. To put that into perspective, consider that it’s bigger than Palm Springs (244 km2) and just smaller than Kabul (259 km2). Perito Moreno is one of the only glaciers in the world that is still advancing, while most others are retreating.

I opted to do a mini-trek excursion, which gives you the chance to view the glacier from afar on viewing balconies and then to do a short hike on it. If you want to splash out, try the dramatically named Big Ice Tour, which allows you to do a whole day trek. 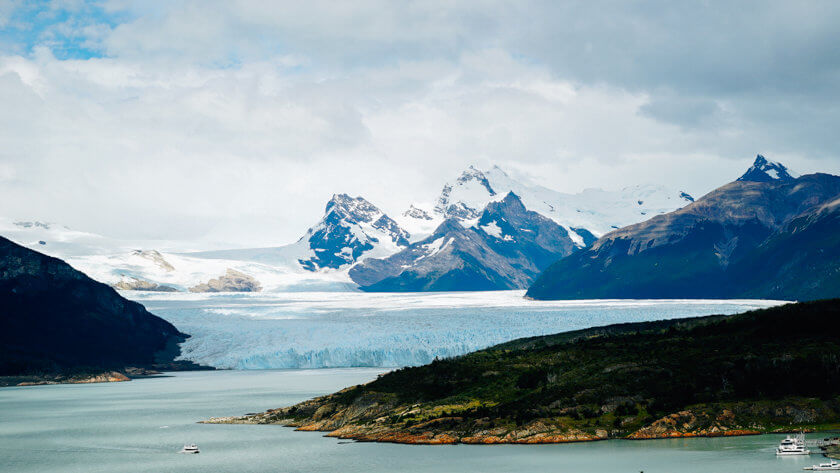 It’s mesmerizing to sit on the viewing platforms and watch as huge chunks of ice fall off the luminous blue glacier, making a thunderous clatter as they fall into the lake below. The creaking and cracking sounds like an enormous meringue crumbling apart.

The hike begins with a 20-minute boat ride across the Brazo Rico lake. After arriving on shore and slipping into a pair of clunky metal crampons, a guide will then take you for a 1.5-hour trek. Seeing the streams, small lagoons, crevasses and ice formations gives you the opportunity to truly experience the beauty and vastness of the glacier. It’s incredible to think that some of this ice is centuries old, especially as the tour ends with a cup of warming Argentine Whiskey (who knew it existed?!) on the rocks, which were chipped straight from the glacier with an ice pick. 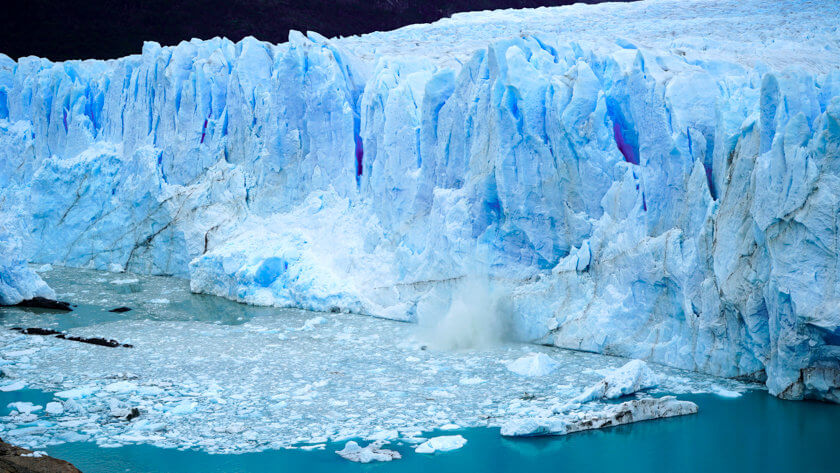 El Chaltén is a 3-hour bus ride from El Calafate. It’s a small village that was founded only 30 years ago. From El Chaltén you can hike the Laguna Los Tres trail. Get a bus to El Pilar and start the walk from there so you don’t do the same route both ways. The last 1km up to the top is very steep – apparently it’s the equivalent of climbing 100 flights of stairs. At the top you’re rewarded with view of the snow-capped Cerro Fitz Roy, which stands, imposing, above an aquamarine lake. The beauty of it was so unexpected; it is simply one of the most amazing views I have seen in my life. Give yourself enough time in El Chaltén so you can do this walk on a clear day, otherwise you won’t get to see much. Another lovely walk is the Laguna Torre trail. This is easier as there’s less uphill but it’s still about 18km. After a long day hiking, I devoured a three-course meal at the wonderful La Taperia, where there is always a queue outside. The Waffleria is also great for a quick snack after a walk – the waffles with apple, cinnamon and cream are delicious. 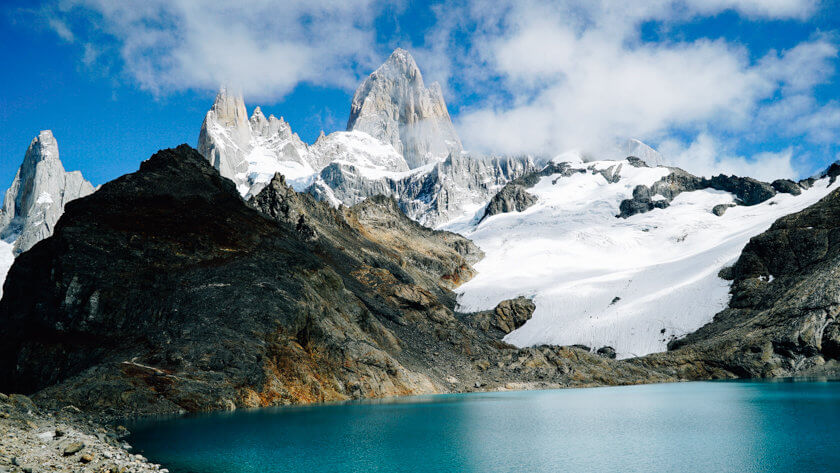 Take a journey from El Calafate to Puerto Natales, crossing the Argentine-Chilean border. Puerto Natales was once a port but tourism has taken over and it’s now a base for exploring the Parque Nacional Torres del Paine. Accommodation isn’t cheap, so you’re better off hiring a reasonably-priced camping kit from and heading straight into the park, either on one of the regular buses or with a hire car. 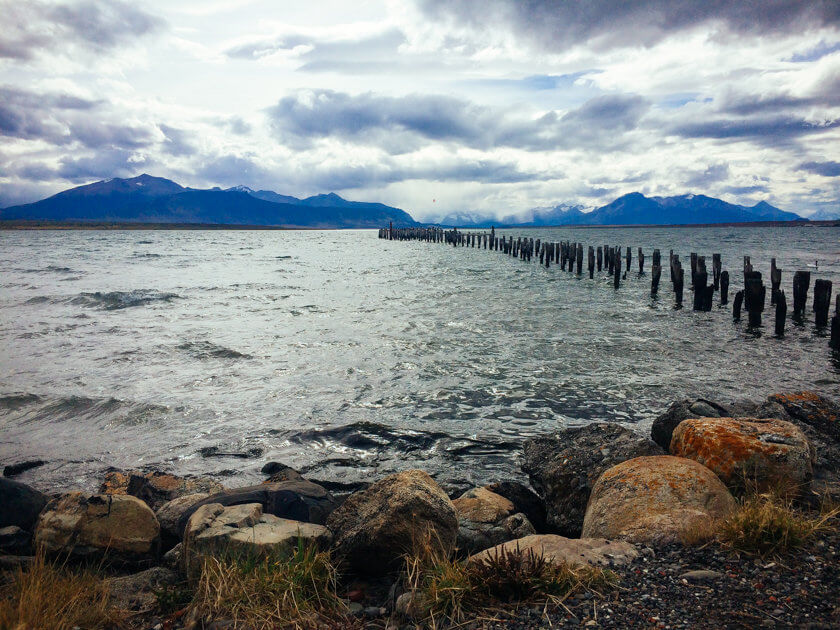 The W-trek in Torres del Paine in Chile is Patagonia’s most famous and iconic hiking route. The landscapes are unreal. The blues of the lakes, glaciers and sky are extraordinary, and the greens of the flower-filled fields and the imposing granite mountains make for truly breath-taking scenery. Even when the sky is cloudy and it’s raining, the mountains are enchanting, enveloped in a hazy mist, with waterfalls crashing down from the glaciers. 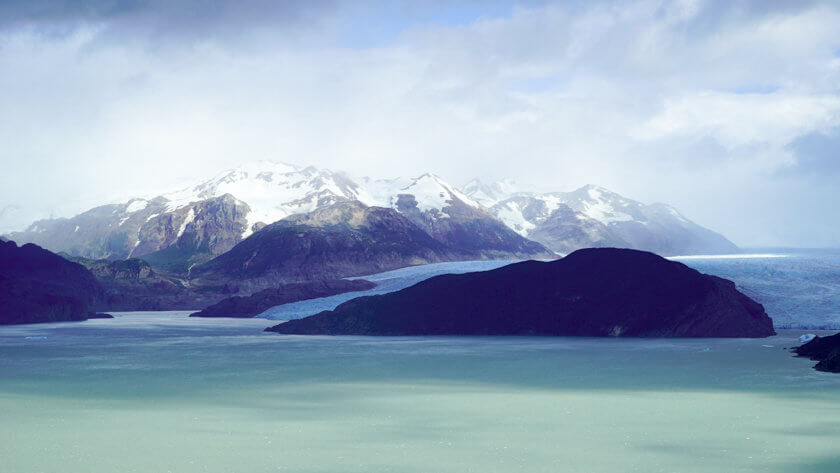 It takes four or five days to hike the W completely. If you’re lucky and well-prepared you can book the refugios (basic dorm/hut) or camp sites along the route. Reservations are now required in the park and space is limited. If, like me, you have a more laissez-faire attitude to planning, don’t despair. Hire a car and stay in , a peaceful spot within the national park and a short drive from the W route. The site has stunning views of Cordillera Paine at sunrise and each camping spot has its own little hut providing shelter from the weather (more on that later). From here you can do the whole W trek (from West to East) as a series of day hikes, taking the catamaran across the lake to Refugio Paine Grande and returning to the campsite in the evenings. I did it in three days, but four or five would be a more relaxing pace. The benefit of doing it this way is that you don’t have to carry your kit between camping sites, and you get a head start on any day trips coming in from Puerto Natales. The route feels very safe and there are a lot of solo female travelers. 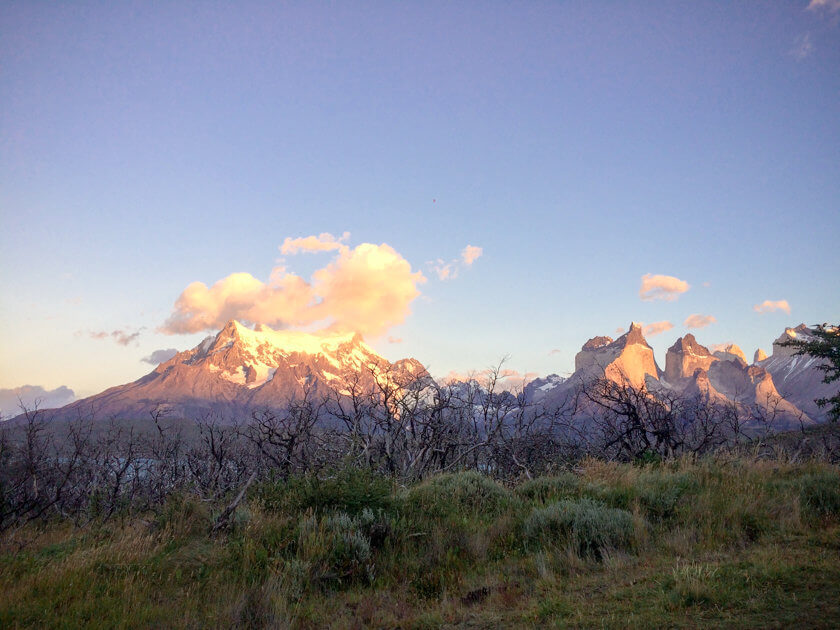 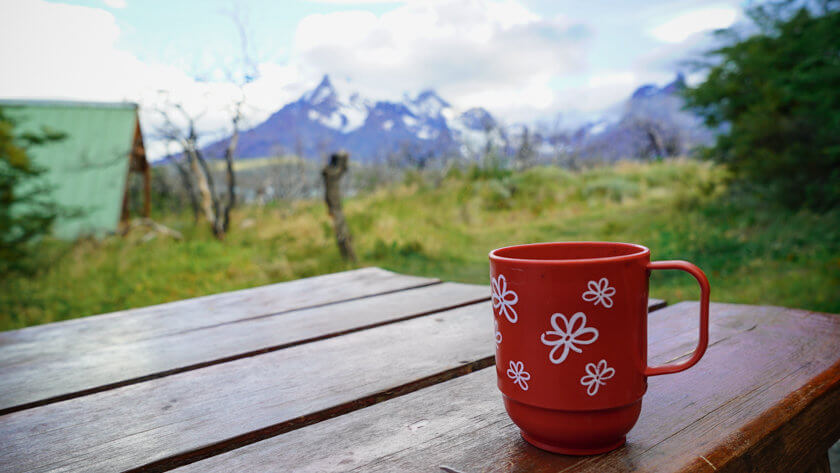 The Torres are the most famous view in the park. If you stay on the trek route you can get up early and make it to the top for sunrise. Otherwise it’s an 4-5 hour trek from Hotel Torres, which you can drive to. My favorite view was of the the majestic Glacier grey, which is surrounded by a glacial lake with electrifying-blue icebergs floating serenely upon it. 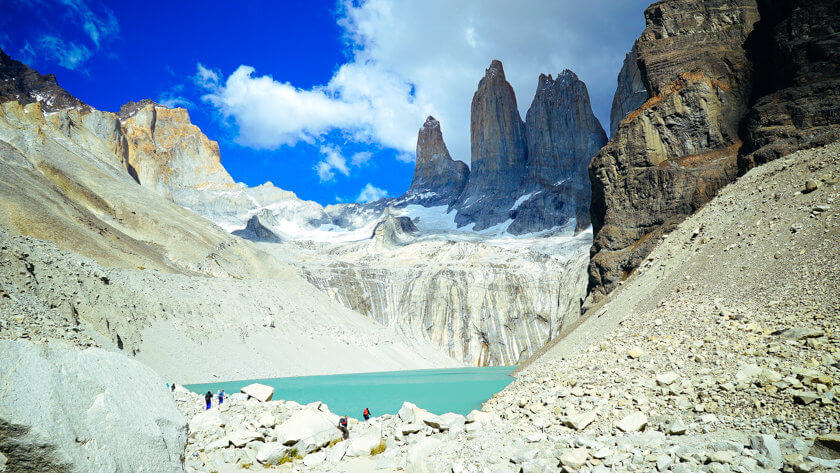 The only things you need to know about the weather is that it is volatile, so bring lots of layers, and that the wind is ferocious. It can reach speeds of up to 120km/h, whipping up mini tornadoes on the lakes and almost knocking you over while walking. Beware of the blusters while camping too. It’s easy to confuse the forceful gust for a wild animal trying to get into your tent. 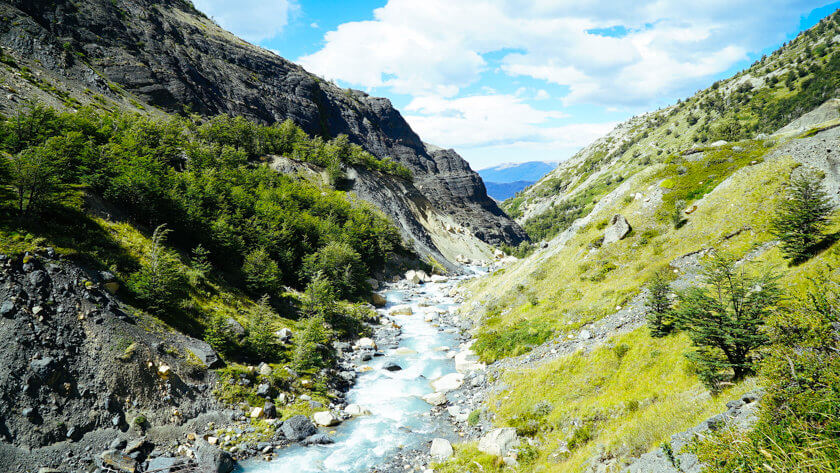 All in all, I racked up over 100km hiking the W-trek, and to recuperate, I booked into the in Puerto Natales, located on the shores of fjord ‘Last Hope’. It’s an old meat storage plant that’s been named a national heritage site and converted into a luxury hotel. The architecture is beautiful and thoughtful. Many of the original features of the factory have been preserved and ALL of the rooms and communal areas (including the sauna and steam room) look out onto the spectacular landscape outside. As you walk through the building, you can see the old steam engines and machinery that have been restored and are exhibited in the hotel as part of a museum.

The food at the hotel is outstanding. Relax in the bar with a pisco sour then try the mixed seafood ceviche for starter, the glazed local lamb shank in red wine sauce for main and the orange crème brûlée for desert. The centolla (king crab) sandwiches for lunch are also unmissable. It’s expensive but is by far the best hotel I have ever stayed in.

Walk with Penguins in Ushuaia (2 days)

It’s a long way to get to Ushuaia, which is touted as ‘the end of the world’ by every other shop and restaurant in the town. You can either fly, which is expensive, or get go to Punta Arenas and take a 14-hour bus.

The main draw of Ushuaia is the penguin tours. This was one of the highlights of my whole trip. Choose Piratour as they are the only company that allow you to walk with the little birds. You’ll get to see the hundreds of Magellan Penguins, which are the most common breed on the island. They are incredibly cute, about 40 cm tall, and waddle along flapping their wings. On the day of my visit there was also a king penguin sunning himself on the beach. He’d apparently got lost during a migration and had ended up on the wrong island. Although he can’t mate, our guide assured us that the Magellans would keep him company.

The time on the island passed too quickly and, unfortunately, you can’t get away from the touristy nature of the trip. Despite the guide’s warnings that penguins like space, some of the group were surrounding the poor creatures trying to take selfies. 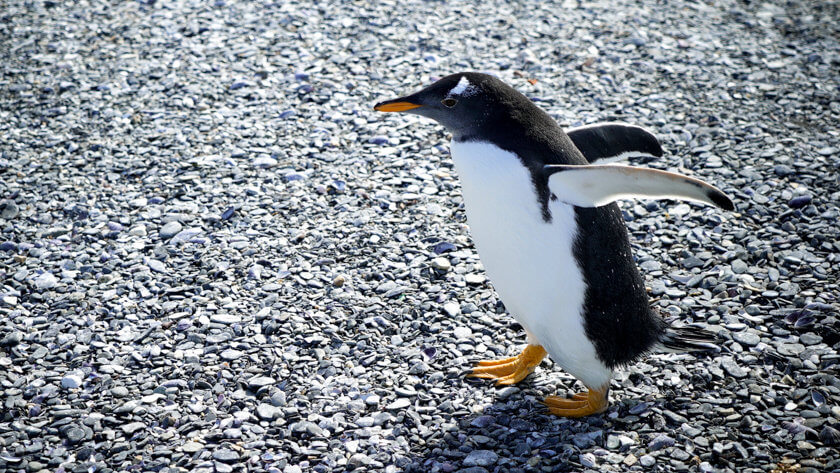 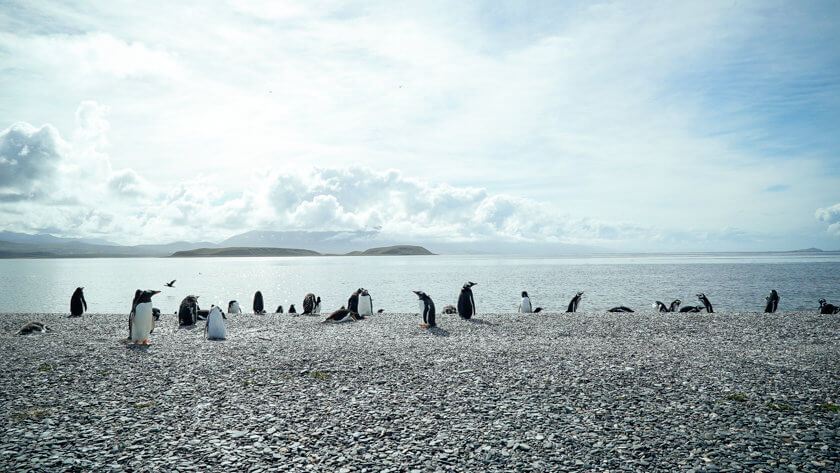 The second part of the trip is a visit to a laboratory studying the biology of marine animals, which perhaps doesn’t seem as exciting by comparison. However, it’s actually fascinating to hear how they go out scouting for carcasses of marine animals, do an autopsy, cut off the meat, soak them in rainwater for several months to remove the remaining tissue and then clean them up using toothbrushes (!!), before studying the skeletons and displaying them in a small museum.

You’re taken back to Ushuaia by boat through the Beagle channel, stopping off to view the sea lions all piled up and humping, snorting and snuffling together on a rocky island. Before reaching the shore there’s a chance to take pictures of Ushuaia’s iconic lighthouse. 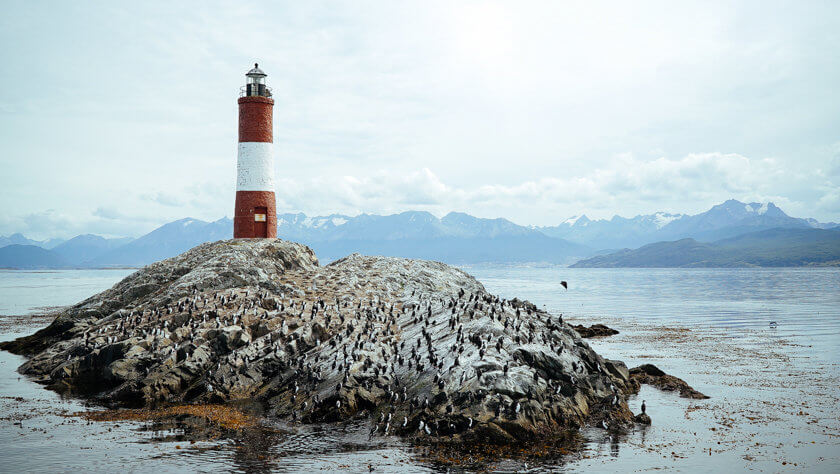 If you have another day to spare in Ushuaia the prison is worth visiting. It’s an unusually shaped building – a central hall has five wings radiating from it. While it’s not the most well-curated museum, it is interesting to find out about life in the penal colony and to learn about some of the gory crimes committed by prisoners (including an inmate known as Big-Earred Small Man. Enough said). At the end of this wonderful trip, the flight out of Ushuaia gives you a last glimpse of the expansive Patagonian landscape. One whose legendary unpredictability delights, and endures.

Have you ever been to Patagonia? Do you agree that it’s the most magical place ever?