The Travelettes Itinerary for Oman


A few months ago, I had occasion to take two weeks off work. I knew I wanted to go abroad but didn’t really know where. I wanted to travel not too far but not too close either, discover a city but also go trekking in nature and enjoy being in a different environment while still being able to speak Arabic (yes, I am a bit of a paradox/complicated human being but who is not, after all?). A few of my friends advised me Oman, which I had never really considered before. I looked it up online: tickets from Jordan were cheap, weather was supposed to be sunny and that was enough to convince me. I booked a flight and started planning my two weeks in the country. It was the start of another of these great adventures. My stay in Oman was a blast and if you’re planning to go there too, then this itinerary might be for you! 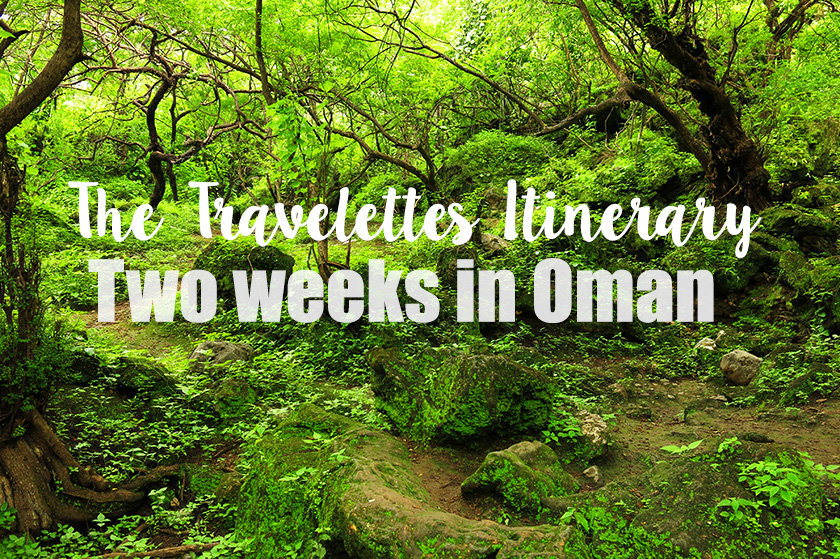 Land in the capital: Muscat (1 day)

I landed in Muscat, Oman’s capital. It was the perfect way to get an introduction to the country. Did you know that it is one of the oldest cities in the Middle-East? Fishermen’s tombs dating back to 6000 BC have been found close to it. To get the ancient feel of Muscat, you should first head to the old part of the capital. Located on a small bay at the far eastern end of the capital, it now looks like a little quiet town made of beautiful white houses.  Your next stop should be Muttrah, where you’ll be able to discover the fish market if you like to wake up early, or the beautiful souk at any time of the day. After a good shopping session, make sure to take a walk on Corniche (I particularly liked it at sunset!). 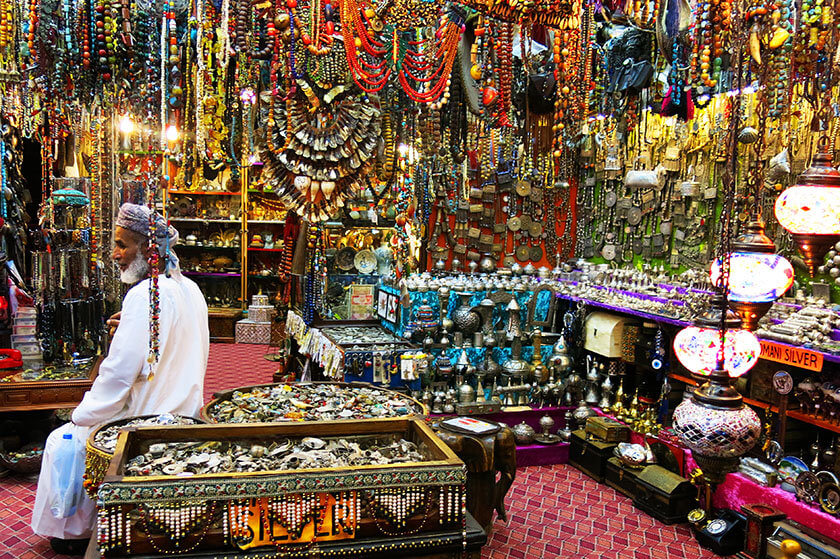 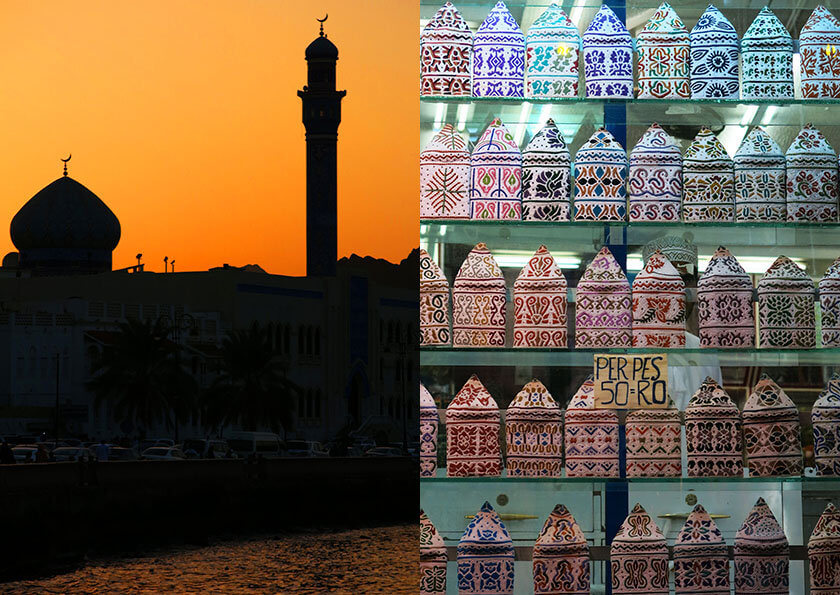 Another must-see, located at another end of the city, is Muscat’s Grand Mosque. Opened in 2001, it is known for its handmade Persian carpet and its chandelier, amongst the biggest in the world. While in Muscat, also make sure to stop by the Royal Palace, one of six royal residences of the ruling monarch, Sultan Qaboos. If you’re a fan of extravagance, you’ll also like walking around Al Bustan Palace. Officially opened in 1985, it is one of the most luxurious places in the Sultanate. 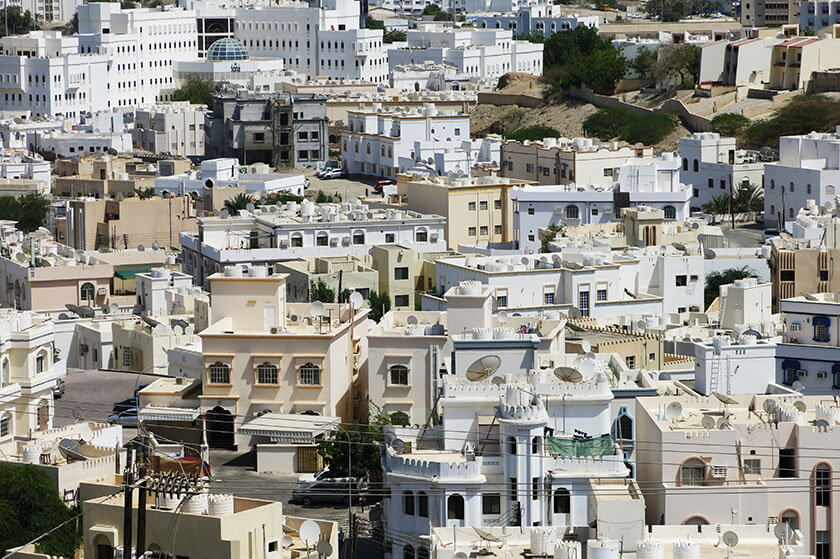 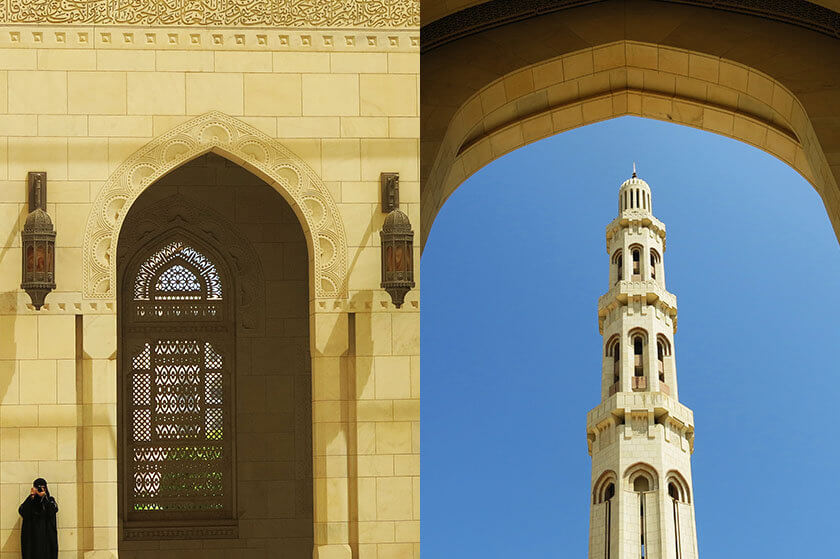 Go for a hike and swim: Wadi Shab and Tiwi (1 day)

The next day it’s time to leave the city and head to a Wadi. Wadi is an Arabic term referring to a valley. In some instances, it may refer to a dry riverbed that contains water only during times of heavy rain. You’ll find plenty of these in Oman, the most famous ones being Bani Khalid, Shab and Tiwi. I personally advise you to try Wadi Shab, as it was my favorite. When you reach it, you first will have to walk and swim an hour or two in clear water, surrounded by palm trees. That’s when it gets interesting. You then will have to leave everything behind you and swim for a few seconds underwater to reach an amazing grotto where the water is almost fluorescent and you can slide down a waterfall. It was, by far, one of my top experiences in Oman. On your way to the Wadi from Muscat, make sure you also make a stop at the Bimmah Sinkhole. Locals believe that it was created by a meteorite, ‘Hawaiyat Najm’, which translates to ‘The Falling Star’ in Arabic. Situated at the bottom of a cavernous limestone bowl, this sinkhole features magnificent emerald-blue water surrounded by steep rock walls. 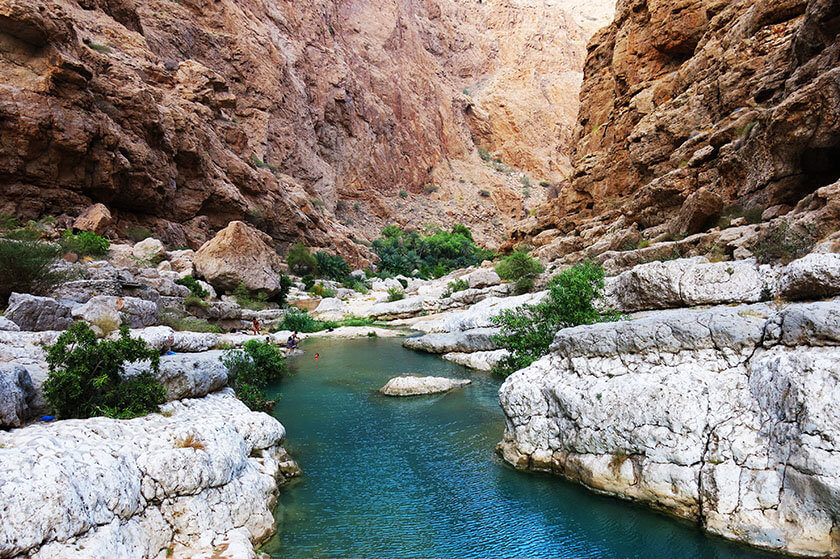 After a day spent in the Wadi, head further south to Sur. The small city is famous for two things, one of them being wooden ships. Sur’s historical location gives it the job of monitoring the Gulf of Oman and the Indian Ocean. Up until now, the city has retained its reputation as a major dhow-building town, the very same vessels that were used for trade two centuries previously.

The second thing Sur is famous for is turtles. Yes, you read that right. Less than an hour from the city lays Ras Al Jinz, a fishing village located in the Ras Al Hadd, on the eastern shores of the Arabian Peninsula. The Ras Al Jinz beach is world-renowned for the nesting endangered green turtles, probably the most important nesting concentration on the Indian Ocean. The Ras Al Jinz Turtle Reserve conducts guided excursions every night to view the turtles and witness the nesting process. An experience not to miss!

Your destination the next day will be a 10 hour car drive away. Yes, I know, unless you’re a fan of road-trips, this does seem like something you would want to pass on. I will just tell you this: trust me on this one. Though the road to get there was long, Salalah was probably my favorite place in Oman. After a trip in the desert, you arrive in a completely unexpected green haven. Full of waterfalls, breathtaking forests and rivers, it almost looks like paradise on earth. The best place to experience this is definitely Wadi Darbat, the most beautiful and scenic spot in Salalah. Other places of interest close to the city include Khor Rori (a small fortified town built almost 2000 years ago), Taqa and Al Mughsayl (beautiful beaches with blue water, white sand and palm trees). 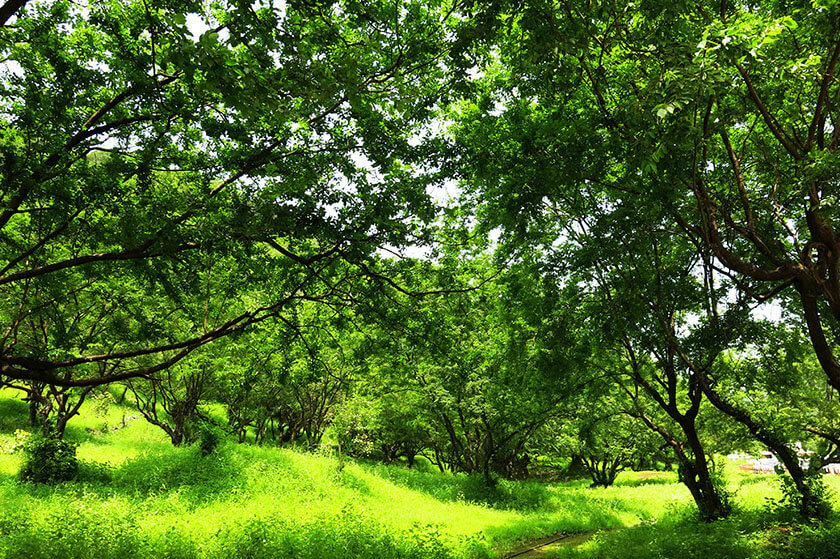 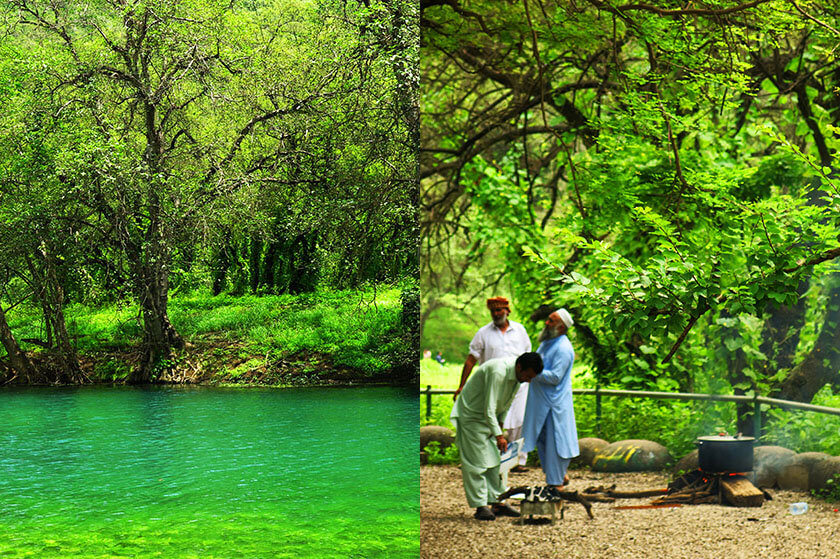 After two days in Salalah, it will already be time to head back to Muscat. Since the road to get there will be, once again, extremely long (unless you fly to the capital, which is another option), I advise you to stop at the Pink Lagoon. Located in the central region of the country, this lagoon is an amalgamation of salt water pools. Given the nature of the soil’s pink colour, the pond’s water looks pink – hence the name. Along the coast of central Oman, you’ll also find various areas of salt flats, the most famous being the Barr Al Hikman. I didn’t get to make these stops myself but I surely regret it. It would have been a nice break on the way to Muscat.

Don’t head back directly to Muscat – make the most of this road-trip by spending a night (and the following day) in the desert! The Sharqiya Sands (formerly known as Wahiba Sands, or Ramlat al-Wahiba), is a famous region of Oman. Inhabited by Bedouins, this is the perfect place to learn more about their nomadic way of life. Take advantage of your stay there to also shop some local crafts such as the Omani key rings and camel bags, usually handmade by Bedouin women.

Once you’re back in Muscat, you’ll have the opportunity to take a few day trips. I highly recommend spending a day in Nizwa and Falaj Al Khatmeen. Nizwa was the former capital of Oman and it is one of the oldest cities in the country. It was once a major center of trade, religion, education and art. While you’re there, make sure to visit the local market, the grand mosque and its fort. And also buy some dates at the souk; Nizwa is famous for them! 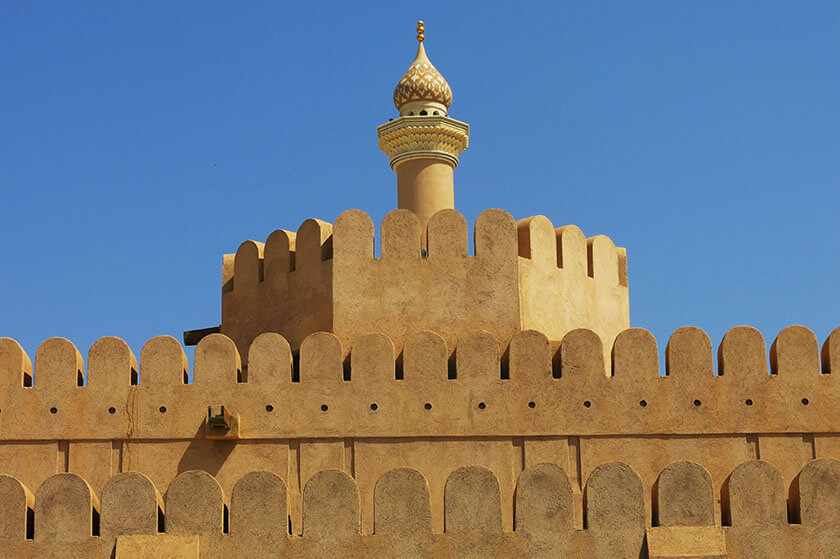 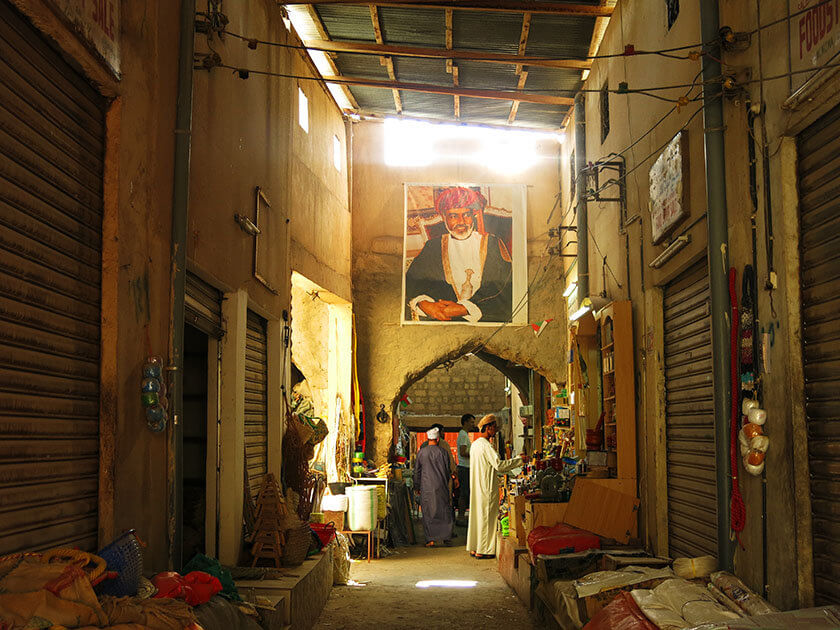 Not far from the city lies the little-known Falaj Al Khatmeen. The Aflaj Irrigation Systems of Oman represent a type of irrigation system as old as 5000 years in the region.  “Aflaj” is the plural of “Falaj”, which means “split into parts” in classical Arabic. This irrigation system efficiently divided the water among all the inhabitants. Falaj Al-Khatmeen was added to the UNESCO list of World Heritage Sites about ten years ago and really deserves a stop, though it’s a bit off the beaten track. 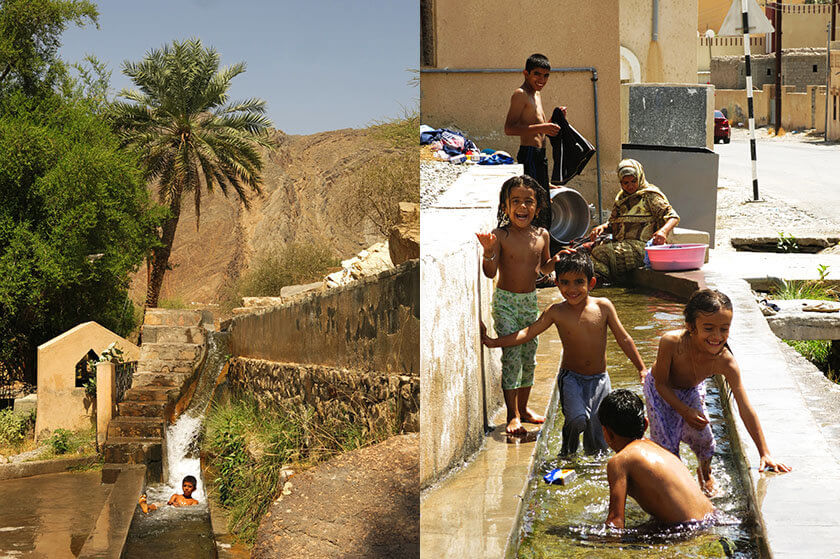 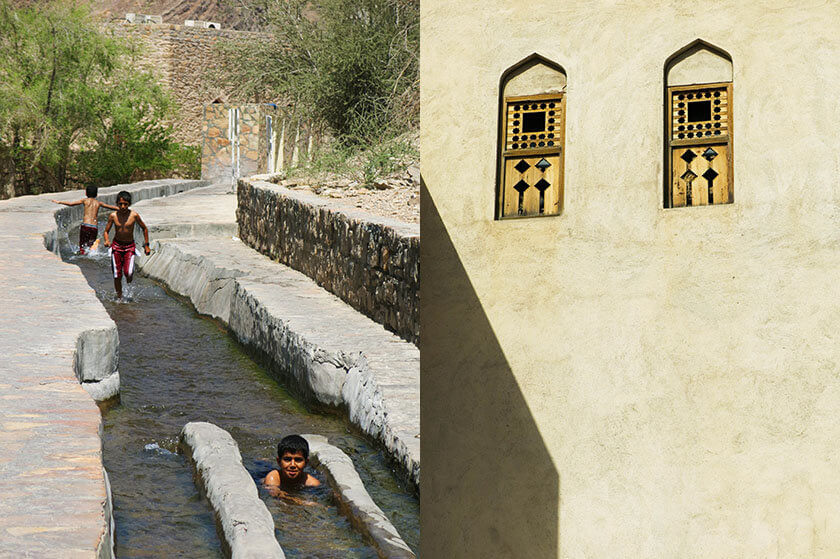 Another day trip from Muscat will lead you to the country’s mountains. Jabal Al Akhdar, which literally means “Green Mountain” is one of Oman’s most spectacular areas. The highest point, Jabal Al Shams (“Mountain of the Sun”), is around 3,000 meters high. This mostly limestone mountain is the highest point in Oman and the whole of eastern Arabia. A day excursion to this mountain is also a must, ideal for trekking and perfect spot for a picnic. 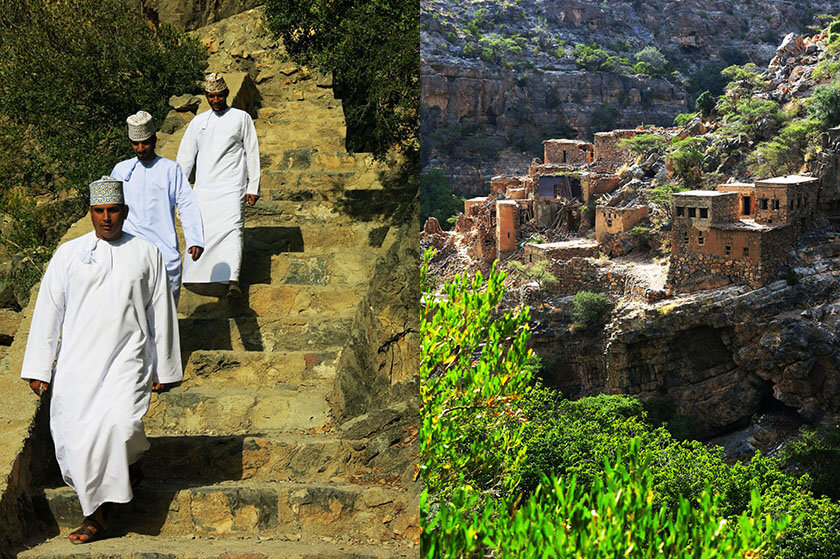 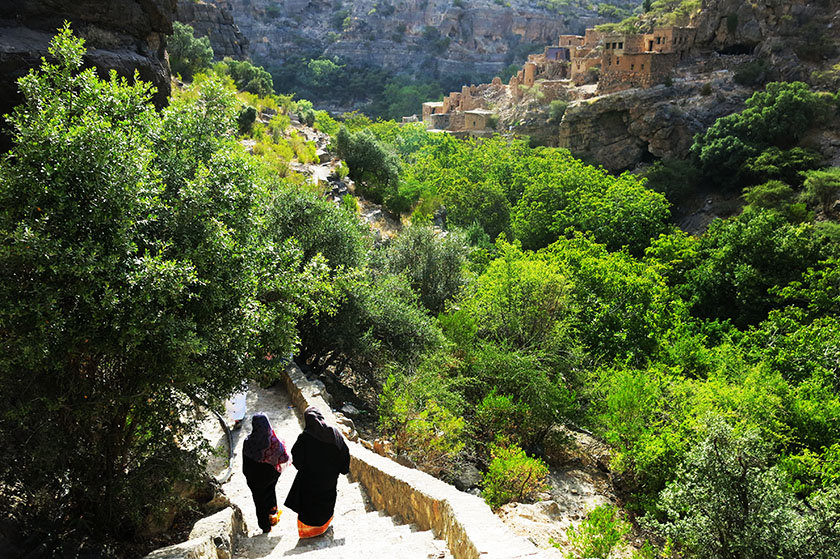 On your way there from Muscat, you can make a stop at Fanja. Just 25km outside the city, this is the first town in the Al Dakhiliyah region. I was lucky to be there for the Eid celebrations (one of the most important days of the year for Muslims around the world) and I got to experience the best of the Omani folklore and traditions. We walked between forts and palm trees to reach a hill overlooking the town. There, hundreds of men in traditional costumes were singing, dancing and firing canons. Needless to say this is the kind of unexpected travel experience you’ll never forget! 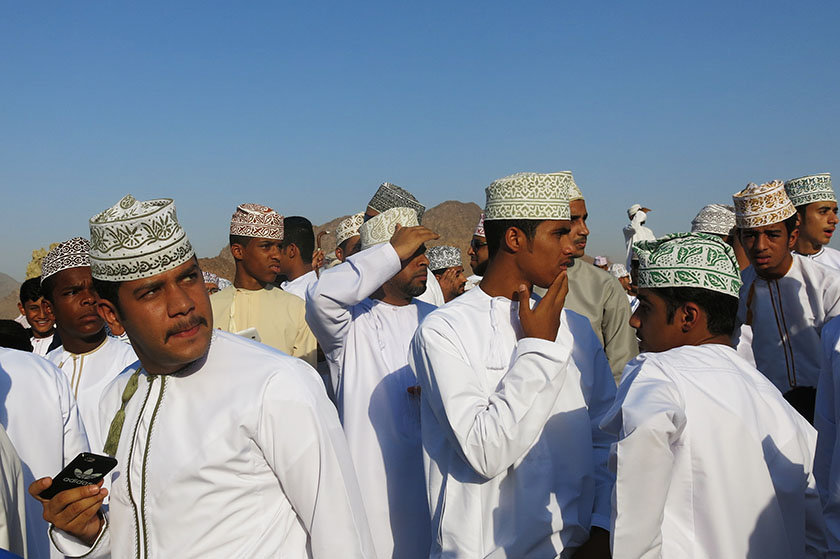 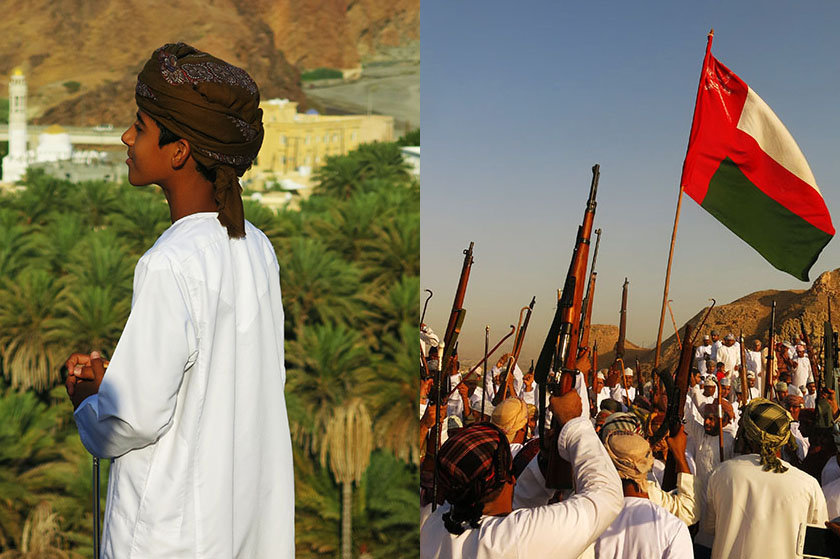 Time for a dive before you leave: Musandam Peninsula / Daymaniyat Islands (3 to 4 days)

By the time you’re back in Muscat, you’ll realize you only have a few days left in beautiful Oman. And you’d be missing out on a great experience in this country if you didn’t take time for a little dive before you leave. Daymaniyat Islands are one of Oman’s premier dive spots. Virtually everyone who goes there does so to dive. They consist of nine low, rocky little islets surrounded by coral reefs. The underwater scenery there is known to be amazing. However, the islands are protected as a nature reserve and therefore, access is restricted. You are not allowed to land on them from the beginning of May until the end of October and the rest of the year, you’ll require a permit (4 OR/day).

The Musandam Peninsula is known as the ‘Norway of Arabia’ with ‘fjords’ and dramatic pink-hued cliffs dropping vertically into the sea. This is one of the region’s most pristine natural wildernesses, boasting a magically unspoilt marine environment, including pods of frolicking humpback dolphins and the occasional basking shark. Who wouldn’t want to see that?

After two weeks of intense traveling, it will already be time to leave the country. In the space of just fifteen days, you’ll have experienced the best of what Oman has to offer: great diving spots, sand dunes and mountains, little towns and big cities, urban settings and green havens. In the meantime, you’ll have certainly witnessed the legendary Omani hospitality and learned more about the country’s culture and history. Oman was a memorable trip for me. I hope this itinerary will make you want to try this experience! 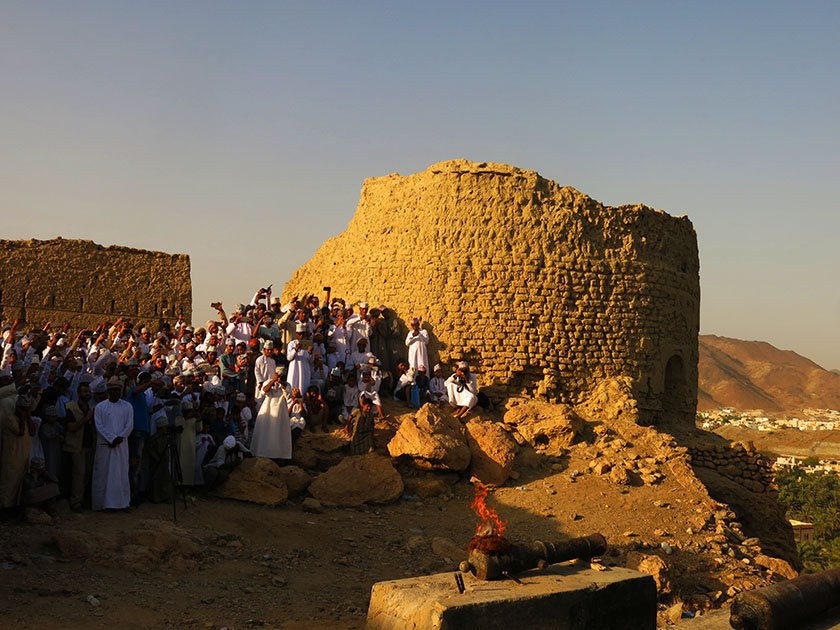 Before heading to Oman, here are some basics you should know about:

Transportation: My advice would be to rent a car for your time in Oman, as you’ll mostly travel around. The places I mentioned in the itinerary cover the whole country so you’ll certainly make use of it. Roads are quite safe and drivers not too crazy, so you shouldn’t get in an accident during your stay! Also – and this is important information – you’ll need a 4×4 if you head to the mountains. Other options to move around are to fly (i.e from Muscat to Salalah or Muscat to Musandam) or to take the bus, but that would not be my first choice.

Accommodation: Camping is allowed and free of charge in the ENTIRE country, as long as you’re not on a private property. So my best advice is: bring a tent and sleeping bag with you. You’ll be able to wake-up to beautiful landscapes every day! Another option I tried when I was there was couchsurfing, and it worked well for me. I got to meet great people who reminded me of the true meaning of hospitality.