The Ethics of Totalitarian Tourism: A Weekend in North Korea


This month, American passport holders can no longer travel to North Korea. After a recent increase in missile tests including an alleged hydrogen bomb – the irreversible weapon of mushroom cloud notoriety – the UN has increased sanctions against them.

Before all this escalated, last April, I ran the Pyongyang (half) marathon. I’d become fascinated while living in Seoul years ago and, during a trip to the DMZ (Korean Demilitarized Zone), peeked across snowy No Man’s Land at North Korea. The gates of the Hermit Kingdom are robust: even before the ban many Americans didn’t know they could go to DPRK. It’s estimated only several hundred Americans enter DPRK each year through approved tours.

Friends questioned my safety and sanity in going. Most Westerners assume an acute view of the place: cold, dark, full of concentration camps a la the Holocaust, run by a crazy dictator who plays with rockets and lives a secluded life of opulence. Yes, there are camps, the economy is a disaster, and there’s a real threat behind Kim’s reckless nuclear proliferation. I wanted to know if badness and bluster was all there was to DPRK beyond the scant media and hyperbolic rumors. As a Westerner and “American Imperialist,” I knew I’d only be allowed a glimpse, filtered through a retro Cold War lens, fogged with the propaganda of Kim’s regime. Nonetheless, I felt that I had to take advantage of an opportunity to see it for myself, meet anyone I could, sense the atmosphere. At the very least, perhaps it’d turn out to be the world’s best-kept vacation secret.

North Korea was relentlessly surreal: exactly what I expected but then, not at all. I felt like I was on the Moon. We visited every war and Kim monument in town. Each was touted as the biggest, the first, or the best; always connected to some North Korean victory. While touring a graveyard of captured war spoils, my guides proudly flaunted the pièce de resistance: a US Naval vessel captured after the armistice. I was getting uncomfortable and wondered why I had opted for a trip like this. One guide sensed my distress and pulled me aside to assure me that she doesn’t think of me as an American enemy. She told me that being here was proof of her country’s desire to build relationships with mine. I appreciated the seeming progressiveness and played along, but wondered if her ploy of empathy was just as cunningly scripted as the propaganda. Our guides were smart and trusted DPRK officials, but they’ve seen more than the average citizen.

Such is the experience of DPRK: you can only believe what you can see, but you know you’re not seeing everything, and you’re not even sure what you’re seeing. It becomes a game of gaslighting and I struggled to ascertain what was sham, charade, truth, or distraction.

Amidst propaganda, there were genuine flashes of delight: gestures, smiles, curiosity. On marathon morning, the sun beat down as people lined the streets, shouting encouragement, high-fiving us as we ran. Most likely, we learned, their attendance was mandatory. But the reactions enthusiastic people expressed about the sport were indisputable.

I posted photos with captions to incorporate facts into my sensory experiences, attempting to make sense of complexities I’d seen through the regime’s rose-colored lenses and struggling to analyze those days in North Korea. Someone commented: “Rebecca how long have u been there, to be brainwashed like that? Have you seen any monuments to the people who have been murdered or imprisoned for trying to leave that place? Get out, fast.” I was taken aback. Was I abetting a totalitarian regime while haphazardly risking my life? Were my dollars funding nuclear weapons? Was I flaunting privilege in the face of oppression?

I didn’t see work camps, of course, but I observed gaunt citizens working on hands and knees without technology or machines. Even in my five-star hotel, food was simple and coffee came at a premium. I felt safe enough, but in a regime like that, the lack of any guarantee of safety created palpable tension. North Korea didn’t brainwash me; if anything, it convinced me that the dangerous power of a close-minded regime is indeed real. I thought about American prisons, our monuments to slavery, my city’s tent neighborhoods of homelessness. I’ve also learned, with some surprise, that many travelers are boycotting my own country for various reasons this year. Propaganda goes both ways, it seems.

According to estimated figures, tourism dollars are a drop in the regime’s bucket. On the other hand, there’s so much value to absorbing multiple perspectives when trying to understand the world and engage with it on human level. That’s not brainwashing, that’s critical thinking. As international friction ramped up all summer amidst the “fire and fury” of current events, each player in this narrative operates on different planes of reality and it’s hard to offer more than a curated observation, but it’s crucial to realize that larger scale diplomacy is needed to open up the DPRK.

Outsiders entering DPRK inadvertently smuggle in the most valuable items of all; experience, education, curiosity. Those of us who can, should. It may not dissipate nuclear war, but small-scale relationships play a huge part in normalizing relations. Though I’ve struggled to make sense of it all, I travel to engage in the mutual benefit of human connection. Revoking that opportunity for diplomacy by escalating threats and closing borders is only a regrettable way to reject peace. 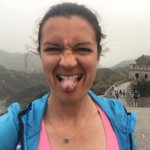 Rebecca High is a traveler, writer, and television producer in Los Angeles who misses being an expat in Seoul. She is passionate about social justice initiatives and relentlessly curious about the world, which she satiates in part by protesting pipelines at Standing Rock, eating water snakes in China, and running (half) marathons in North Korea. She’s been published by The New York Times, VICE, and Roads and Kingdoms. Tweet her or follow her IG .