The Cove House is a nestled in a site swaddled by the mountains of the Western Ghats in India. It has been designed in 2021 by Red Brick Studio. 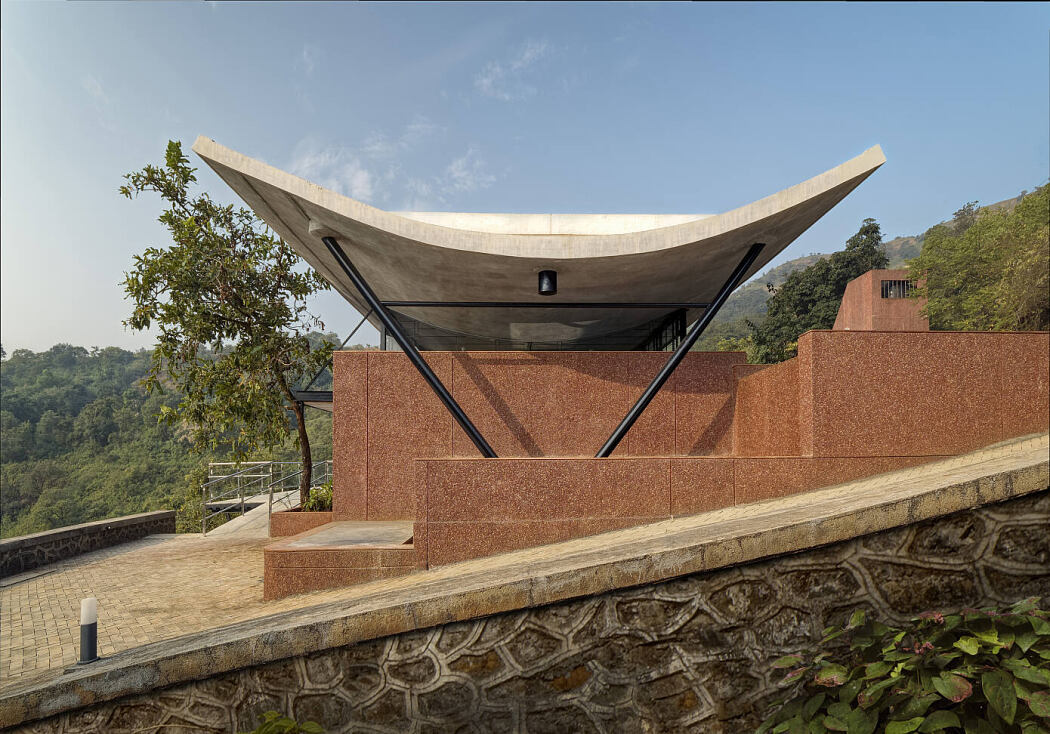 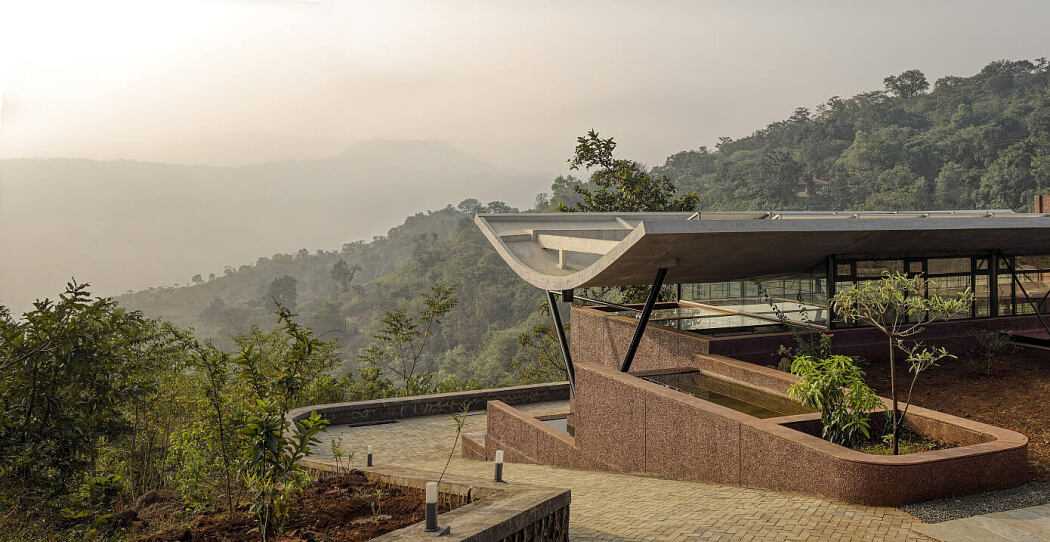 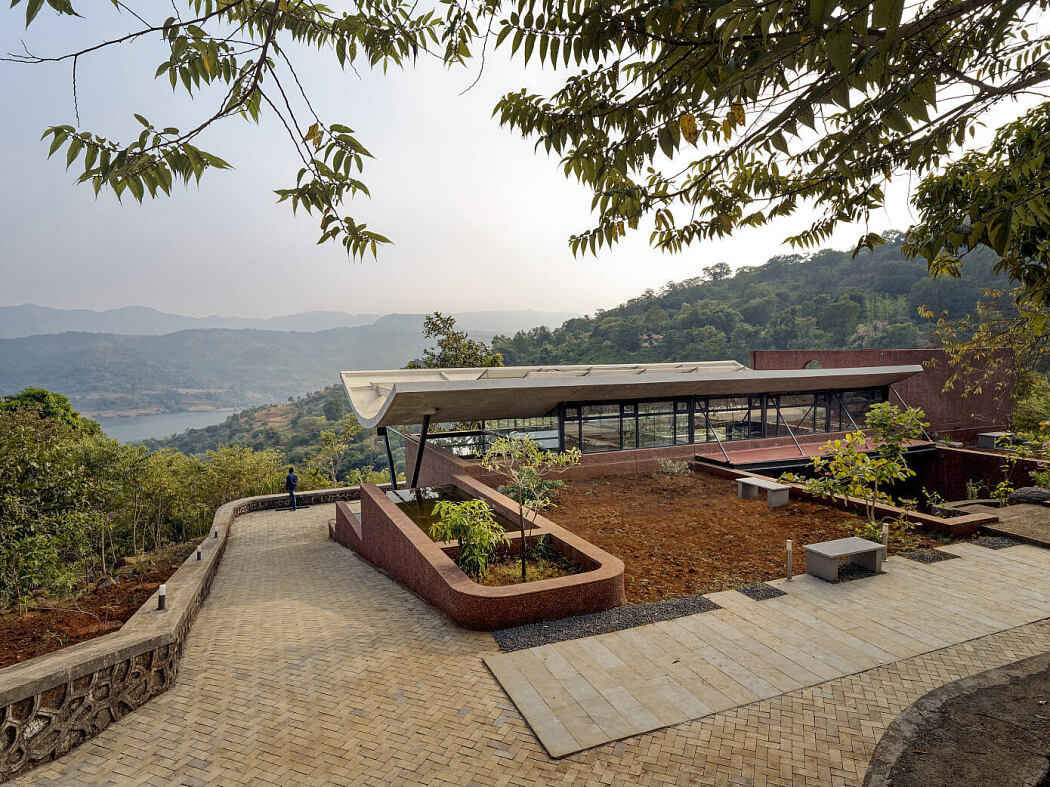 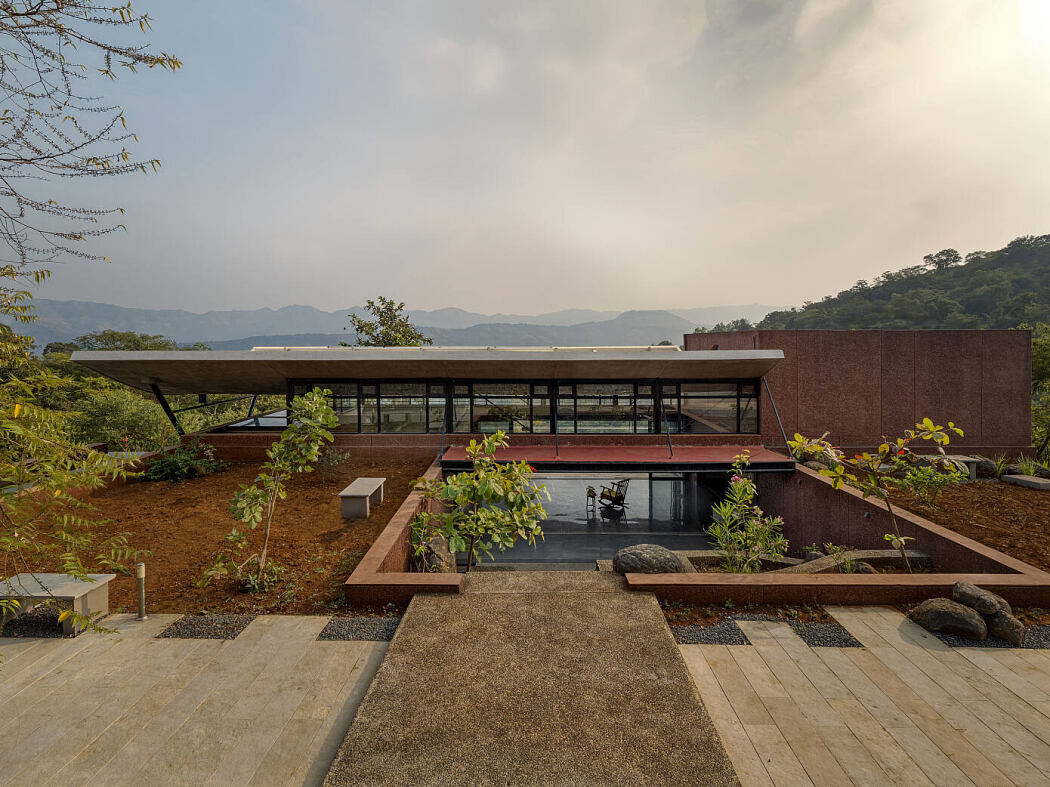 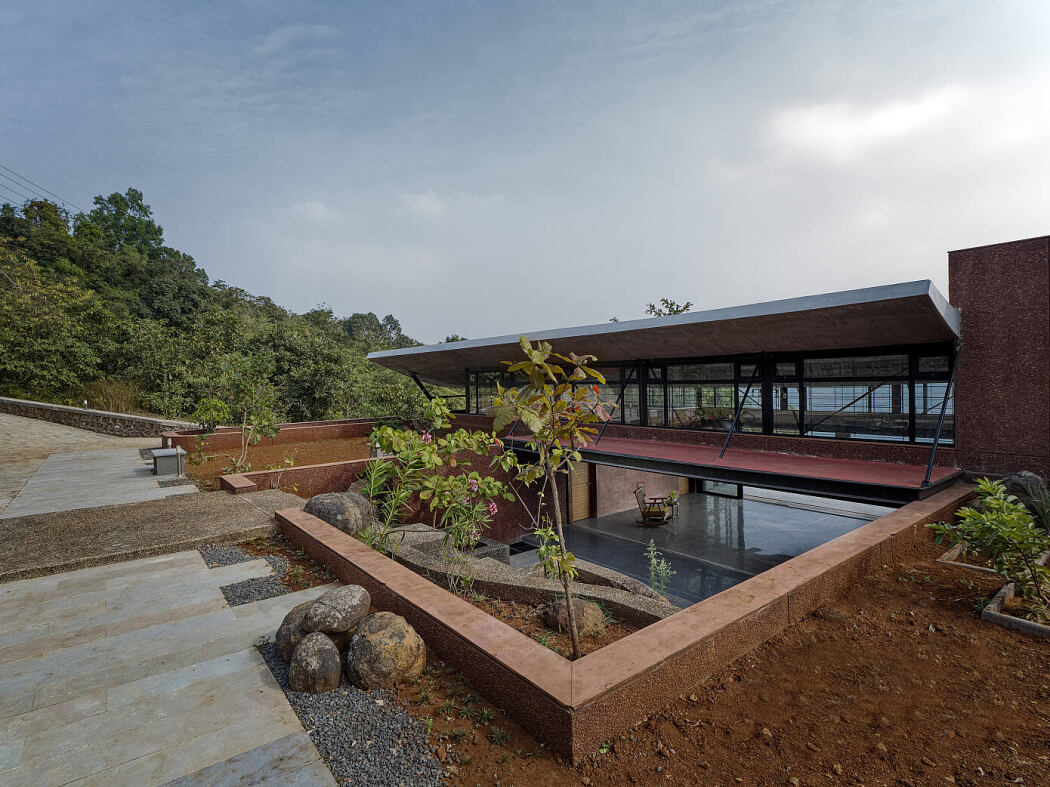 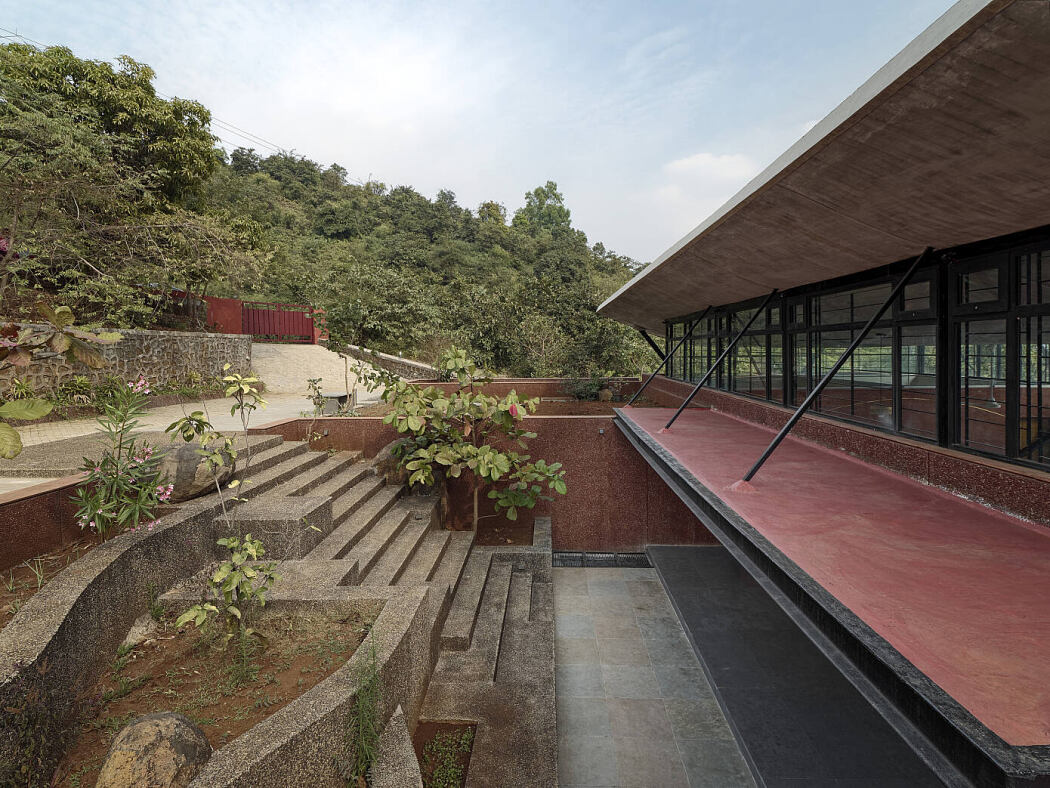 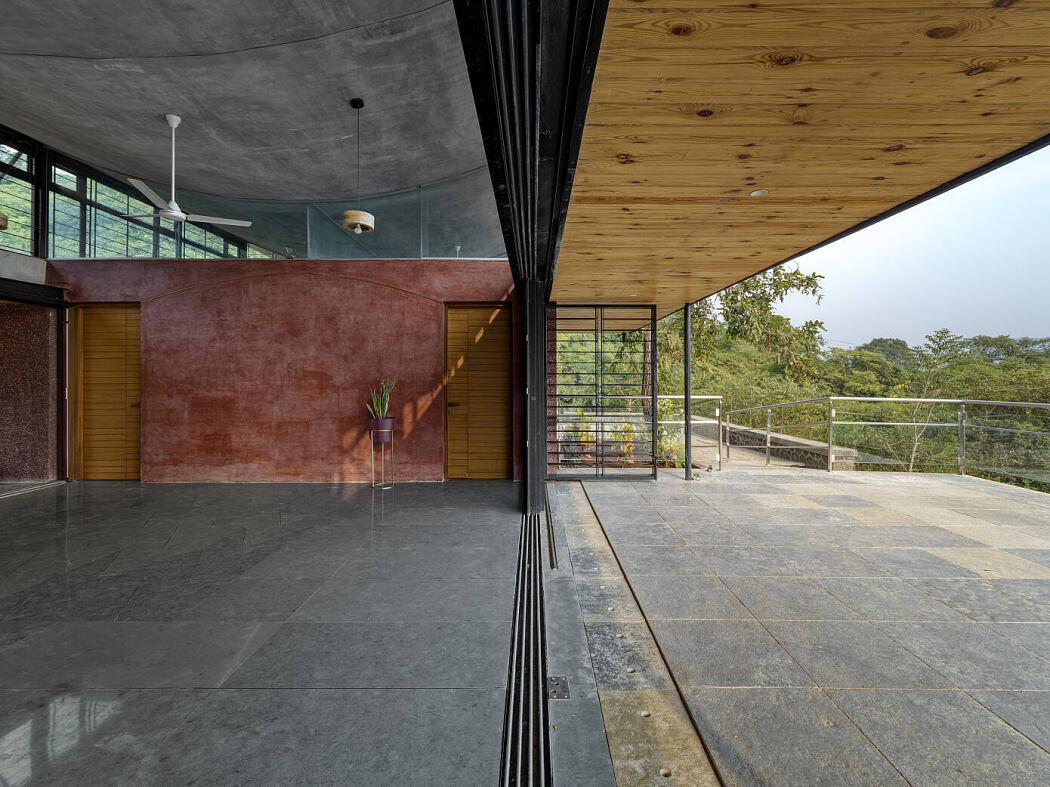 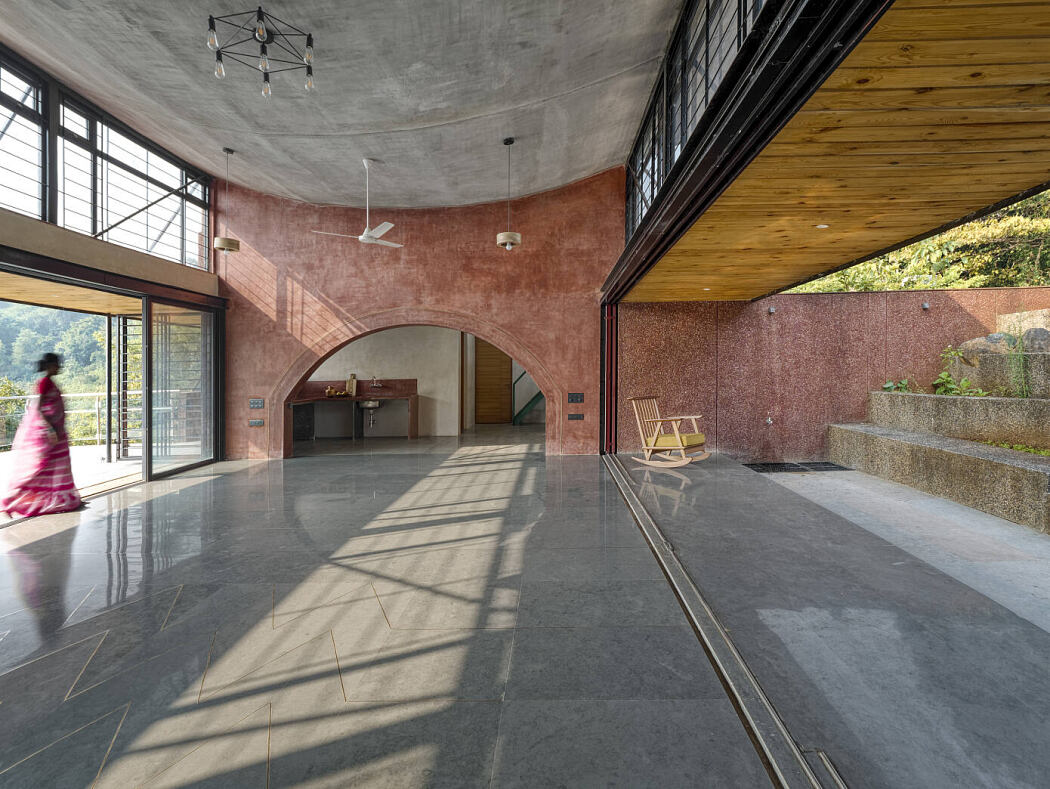 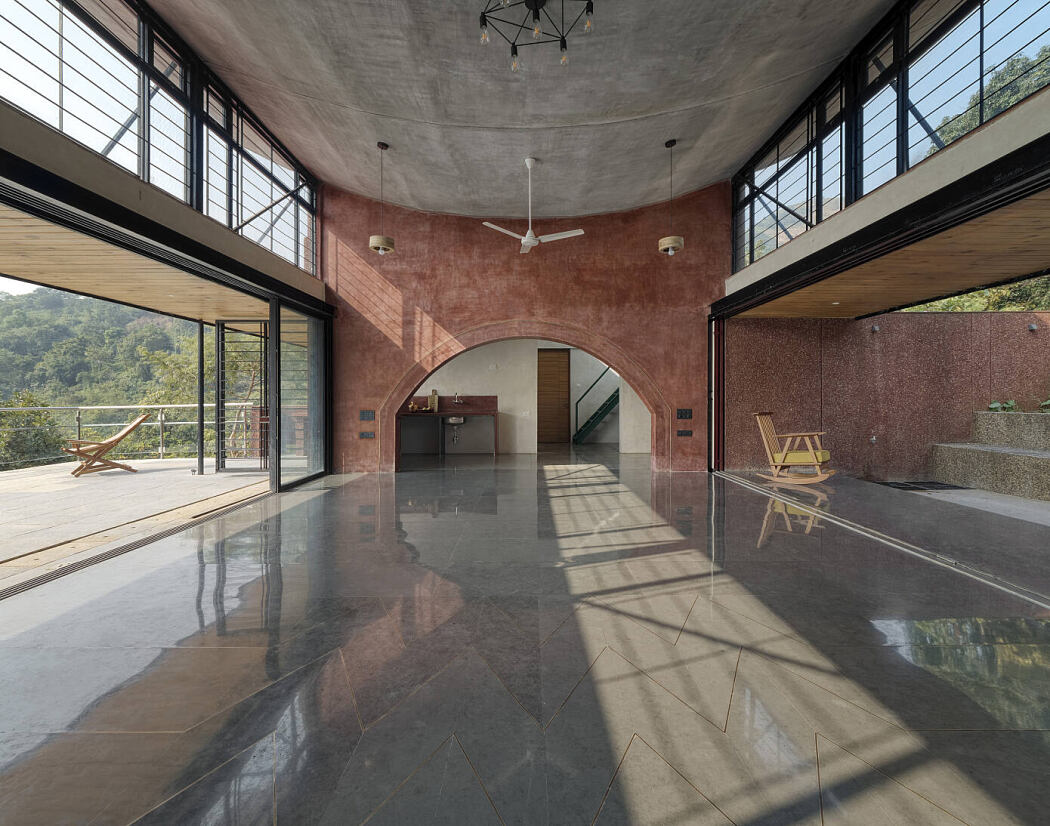 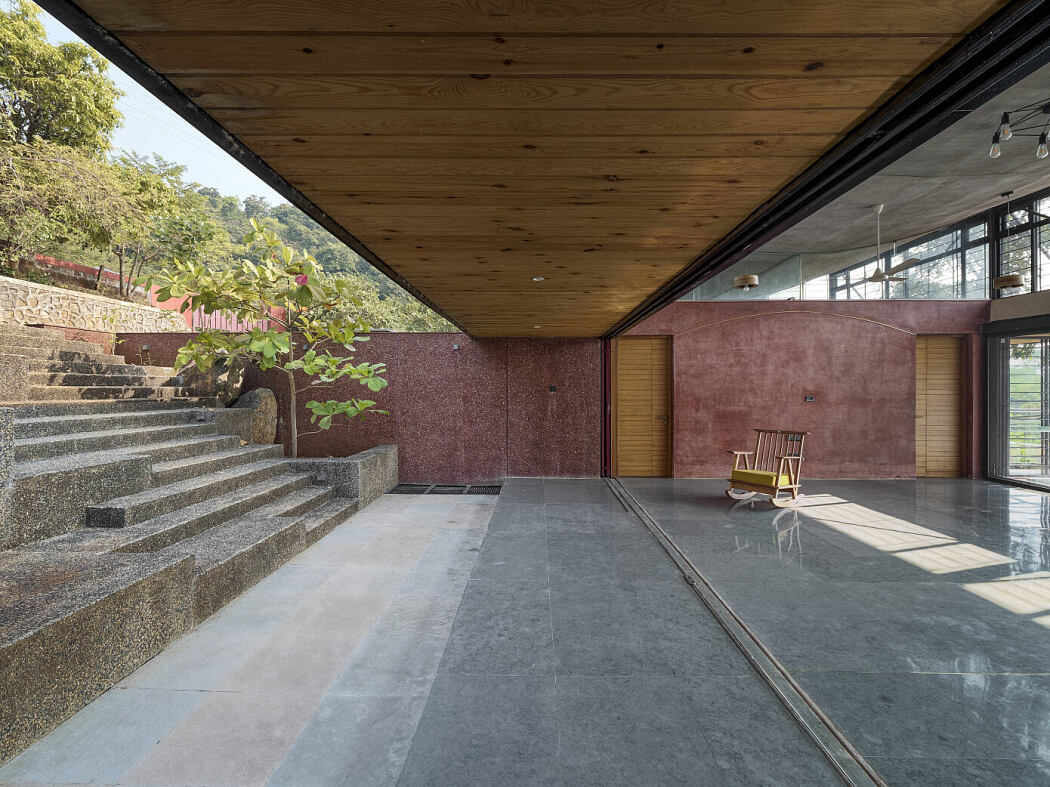 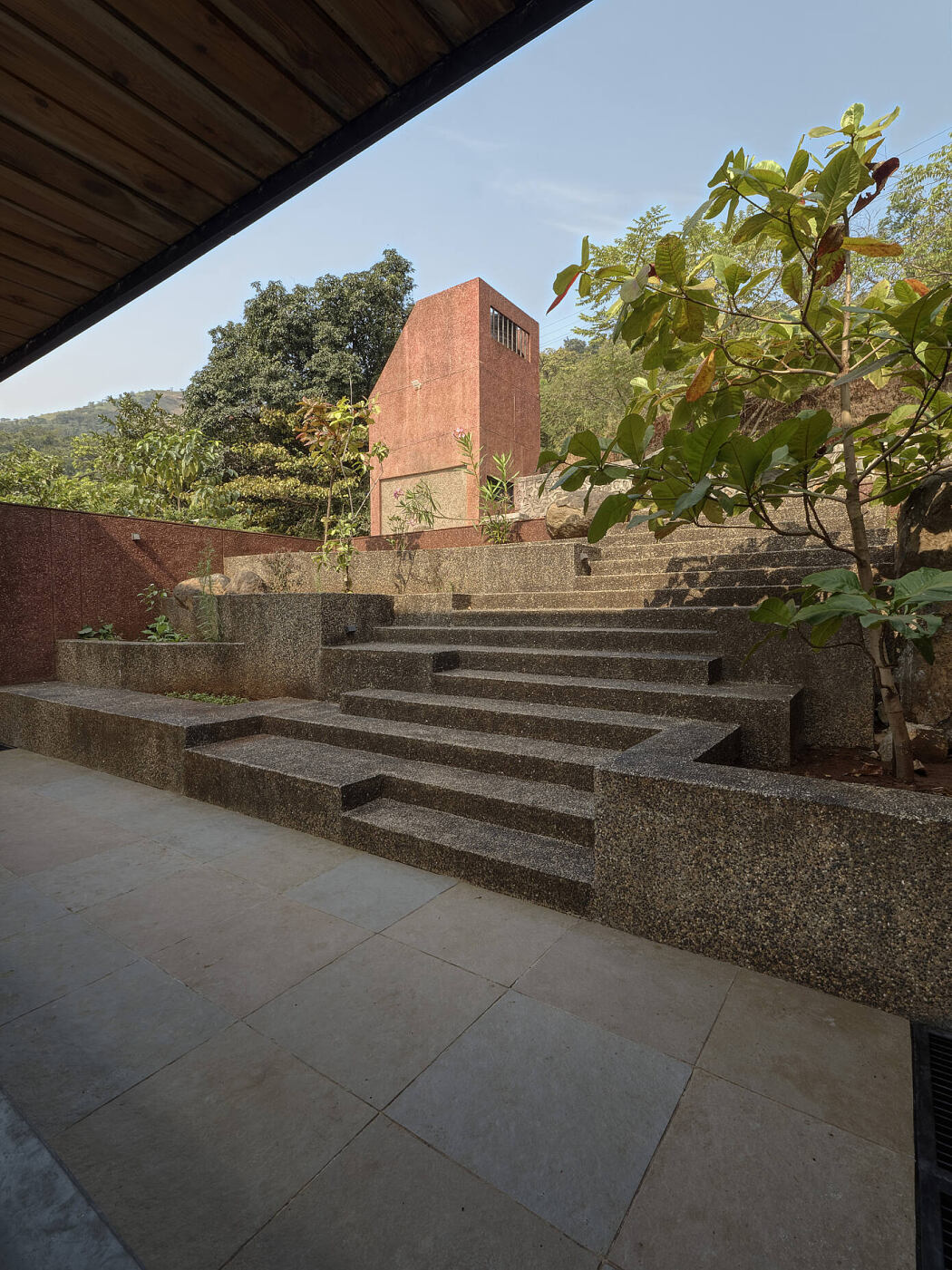 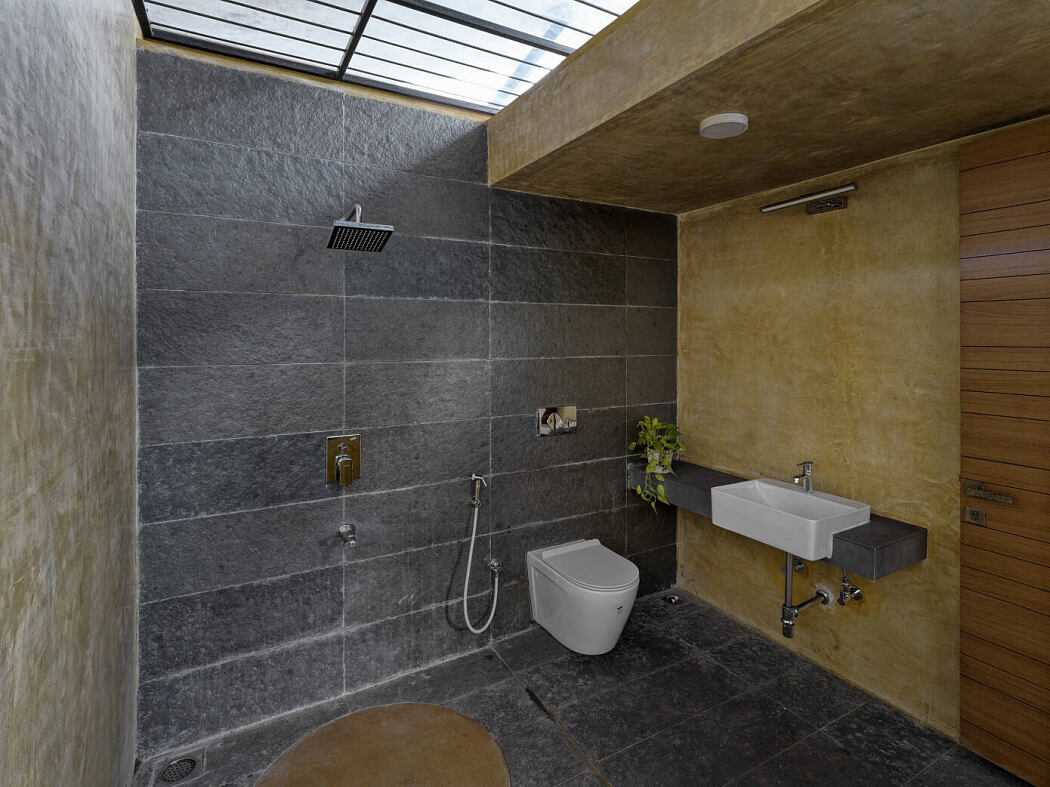 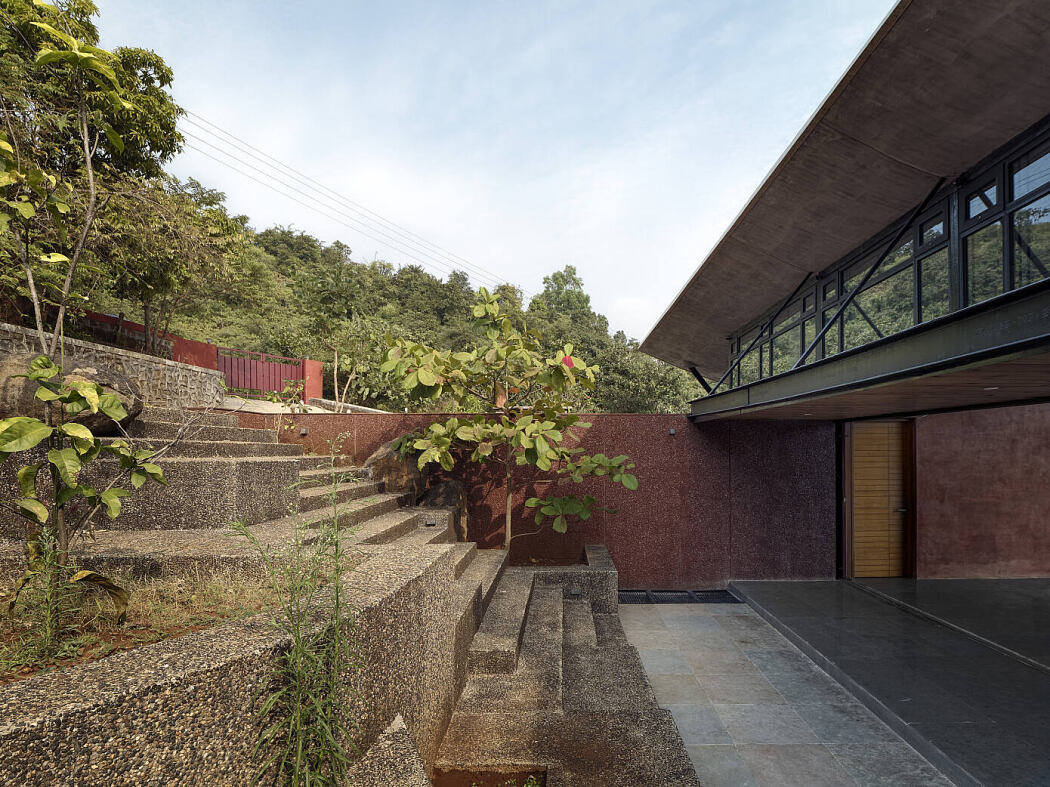 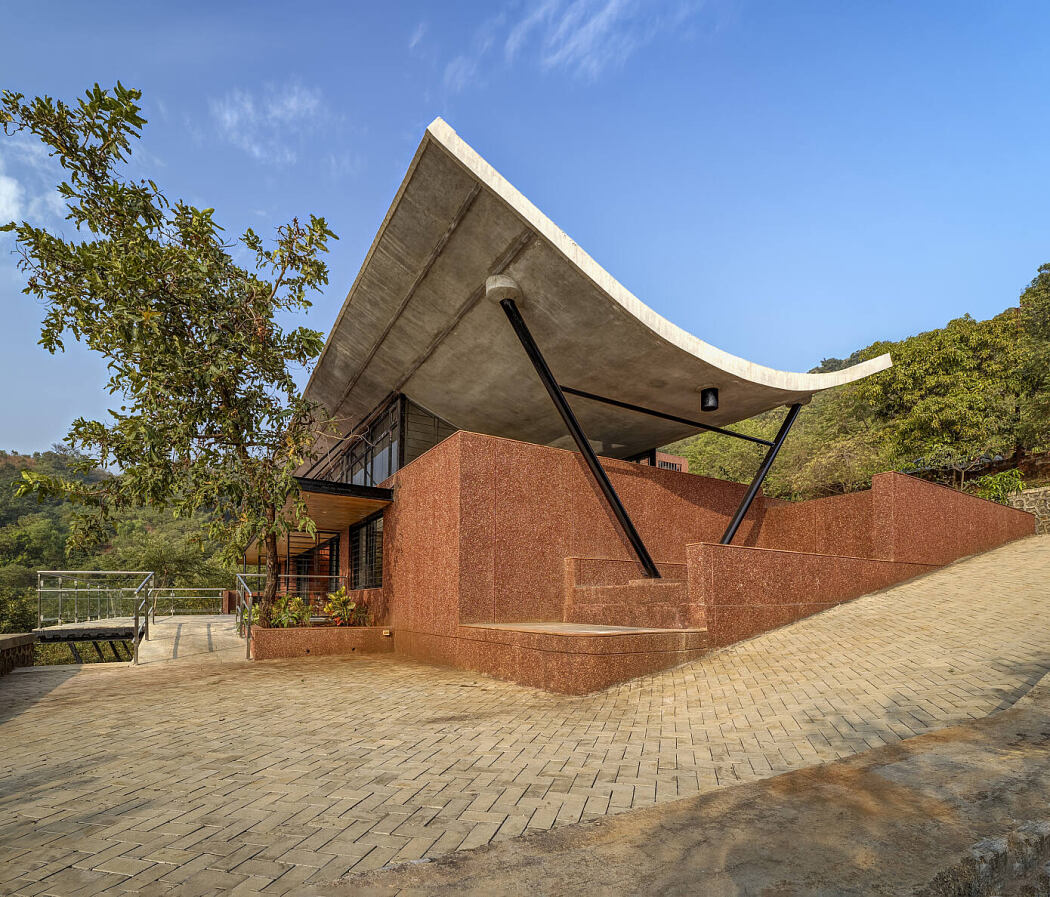 The Cove House is a weekend home nestled in a site swaddled by the mountains of the Western Ghats. Red Brick Studio was approached by the client who wanted to build a space which would allow him a get-away from the hustle of the city life and provide him an opportunity to soak in the picturesque views of the backwaters of the Panshet Dam the site overlooked. Faced with a limitation of a tight constructible area, he also wished to have open spaces which could be integrated with the house to be able to host a larger gathering of friends and family.

Upon seeing the site and its surrounds, the studio’s first response was to create a built-form which would try and blend in rather than stand out. Rather than typically using the flat part for construction, the studio proposed to set the house beyond this zone and use the natural topography of the site to tuck away majority of the house from the view at the entrance.

Much of the house is thus embedded into the ground covered by a single mono-roof with an inverted curved profile spanning across the length of the house. This roof is separated from the built mass by a continuous clearstory window on all sides. Placed strategically at the level at which one enters at the site, the clearstory allows the viewer to look through the house and catch glimpses of the valley across it. The entry to the house is discreet and is accessed through a series of steps in a courtyard build in a natural setting with vegetation and boulders found on the site itself. It leads to the heart of the house which is the open and spacious living area, flanked by bedrooms and kitchen on its sides.

The solution to the client’s requirement of a spill over space was achieved by the custom designed entrance door. These were built in folded metal sheets, so as to cover the entire length of the living room (30’ or 10m) and when slid open, the panels disappear in the cavity walls; seamlessly blending the inside and outside of the house. On the other side, the living room as flanked by a large deck which allows one to soak in the views of the backwaters and the valley around.

Externally, the entire house is finished in grit finished plaster, with a deep red pigment which allows the house to match the tonality of the natural terrain of the region. The coarse finish also allows for very good weather resistance to the extreme seasons of rain and summer in the region. Internally, all walls are finished in a combination of white and colored polished oxide. The roof is constructed out of ferro- cement technology, enabling it be constructed in thickness of 50mm only. The inverted shape allows it to harvest the rain water which is further channeled and stored in a series of water bodies, allowing water to be available for irrigation in the drier months.