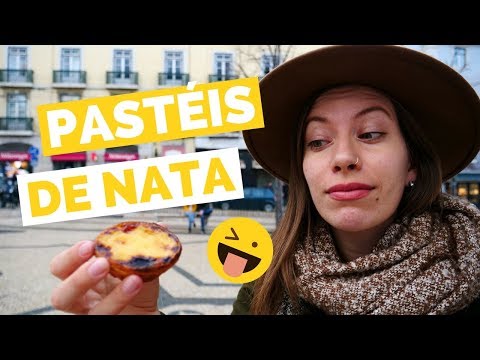 Come join us on a quest to find the best pastel de nata in Lisbon, Portugal as we visit three different establishments eating Portuguese egg tarts all over the city. Pastéis de nata first originated from Santa Maria de Belém in the 18th century by Catholic monks at the Jerónimos Monastery where they are called Pastel de Belém (plural) or Pastéis de Belém (singular). Requiring egg-whites to starch clothes it was common to use the leftover yolks for baking which resulted in these tarts being created. Fortunately, we had the chance to visit Belem to sample the original ones along with two other places. They are typically served warm with icing sugar and cinnamon sprinkled on top. I should also note that the Portuguese egg tarts are popular in both Brazil and Macau as well. The following is a list of the 3 places where we tried them from:

Out of the three we thought the best pastel de nata was at Manteigaria although we’d highly recommend all three spots as the quality was excellent throughout the range of establishments.

Hey guys, greetings from Lisbon and that means only one thing because we need to eat some local food from here and the local food that is really a specialty is the Pastel de nata which is the Portuguese egg tarts.

We got ourselves a little sweet treat. The line was long but they are super efficient in there. We went to Pastéis de Belém. It is like right next to the Jerónimos Monastery. The original. It is the original. They’ve been making these pastries since 1837. They look so good.

We bought four. Poof. And a fly just flew by.

My parents have the other two by the way. We easily could have had two each. We could have. And the price was a Euro and ten cents for each. They are quite small. I wish they were a little bit larger because this is like a two biter.

Oh my are they good. This is not our 1st time to try these. No, we’ve had these before. About two years ago on our last visit.

They gave us two little packs. This one has cinnamon this one is icing sugar. You just sprinkle a little bit on.

So good. It has got like a pudding texture doesn’t it? I love it. The exterior is super flaky. And buttery and after walking around for hours

Our quest for Portuguese egg tarts continues. This is the 2nd spot we’re trying. And this one is Confeitaria Nacional. This place is another like older establishment. It has been around for I think since the 19th century. We’re going to have to look at the actual year. It has been a while. I will show you (1829) it was on the outside of the place.

What is different this time is that we have them in different sizes. So this would be the regular size. This is like the mini me size.

How is that? That is really good. It is really flaky and crispy and then you have that like pudding like eggy consistency but I think compared to the 1st place this one tastes a little bit sweeter.

Okay third shop. This one is called Manteigaria and we went in with the intention of only getting two tarts. We’ve walked out with a pack that holds six. Before we forget they were what a 1.10 Euro?

This may be the best one so far. You think so? This is warm. Fresh out of the oven. Ticks off that box. It is pudding like and creamy. It is really sweet.

You can just eat these all day. That is it from Lisbon and we will see you guys with more food and travel videos soon.