With Tane Cox of Red Architecture, marketing manager Miriam Shaw and planning consultant Stuart Penfold built this three-bedroom home in Pirongia for themselves and their children Georgia (13) and Maisie (4).

Miriam, why did you decide to move your family from Auckland to the Waikato’s Waipā District? My parents had made the move south a decade before, so we’d often go down to visit them or to stay at our family bach in nearby Kāwhia. Driving north back to Auckland, our hearts would sink as we sat in the motorway traffic wondering why we were driving away when we were happier there.
Eventually, Stuart and I decided to make a break from the city too. We took a deep breath, put our home on the market and started the hunt for a home or piece of land to build on in or near Pirongia. 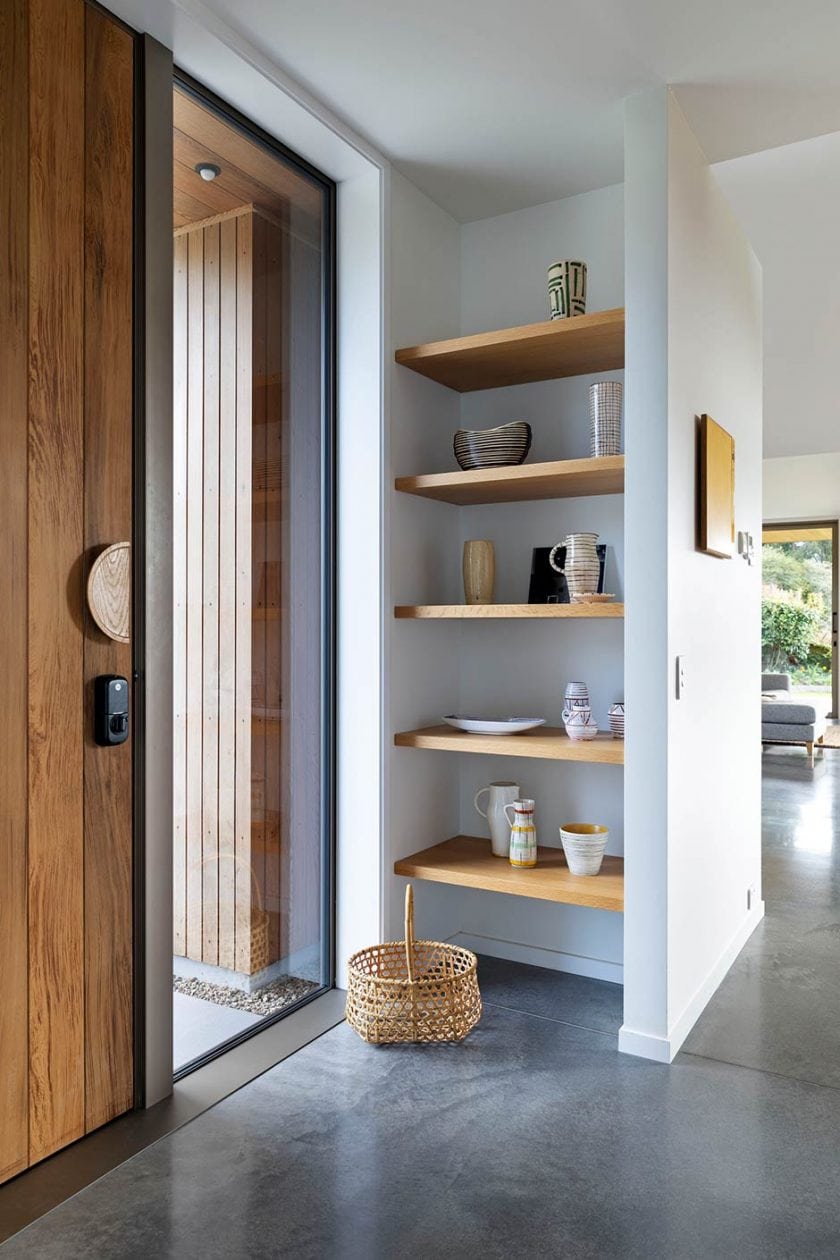 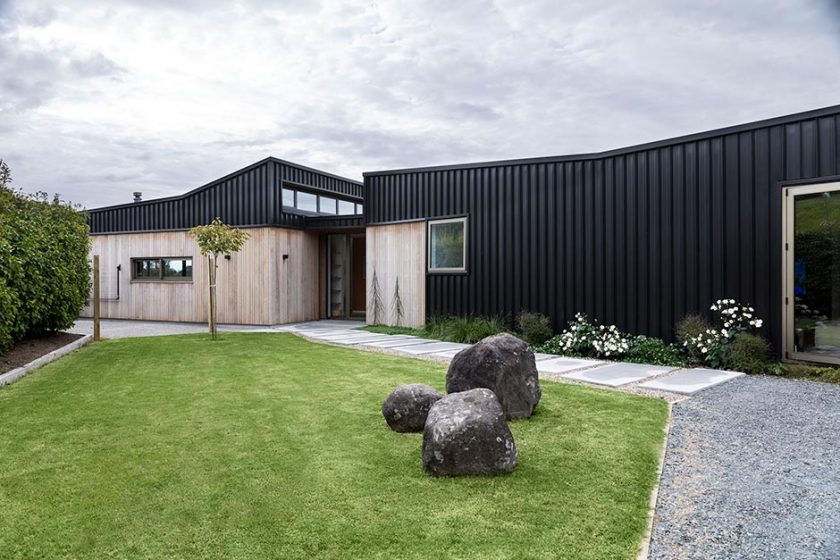 MAIN IMAGE Float by Ed Bats beautifies the dining space. TOP Step through the front door and you’re greeted by a shelf decorated with ceramics by Martin Poppelwell, some West German pottery and an artwork by Patrick Pound. The Apple farmer’s basket is from Everyday Needs, and Spirit Level Painting No. 2 by Simon Ingram hangs on the connecting wall. ABOVE The house is clad in a combination of vertical cedar and Colorsteel. “We wanted to reference rural materials but have the softness of the bronze joinery and wood in some areas, such as our entryway and verandah,” says Miriam.

What do you love about this spot? Pirongia doesn’t have any traffic lights. It has a Four Square, a pub, a café, a rugby club, a fire station and a great school. Our property is right on the edge of the town. It feels remote, but a round trip to the dairy for milk takes five minutes.
Our home is tucked into a sloping piece of land with no other dwellings or roads in sight. The long, northern side of the house looks down over a field to the Mangapiko Stream, which flows from Maungatautari, through the Waipā District, past our place and to the Waipā River. The verandah on the western side of the house faces the flanks of Mt Pirongia.
The hills and fields surrounding us provide ever-changing rural views. On a clear day, we can see the turbines of the Te Uku wind farm near Raglan spinning in the distance. In winter, when the Waikato fog settles in, everything is hidden. A maize field to the east waves bright green for several months, then golden, then it’s harvested in an afternoon and it starts all over again. 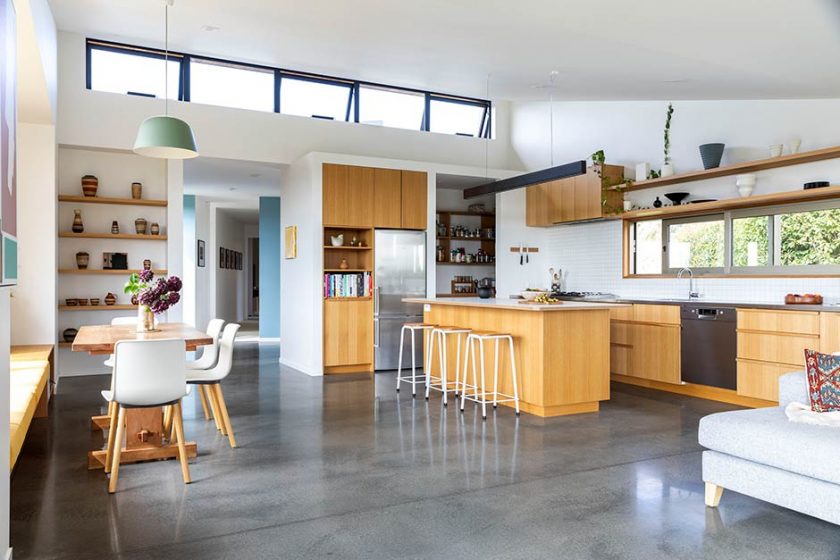 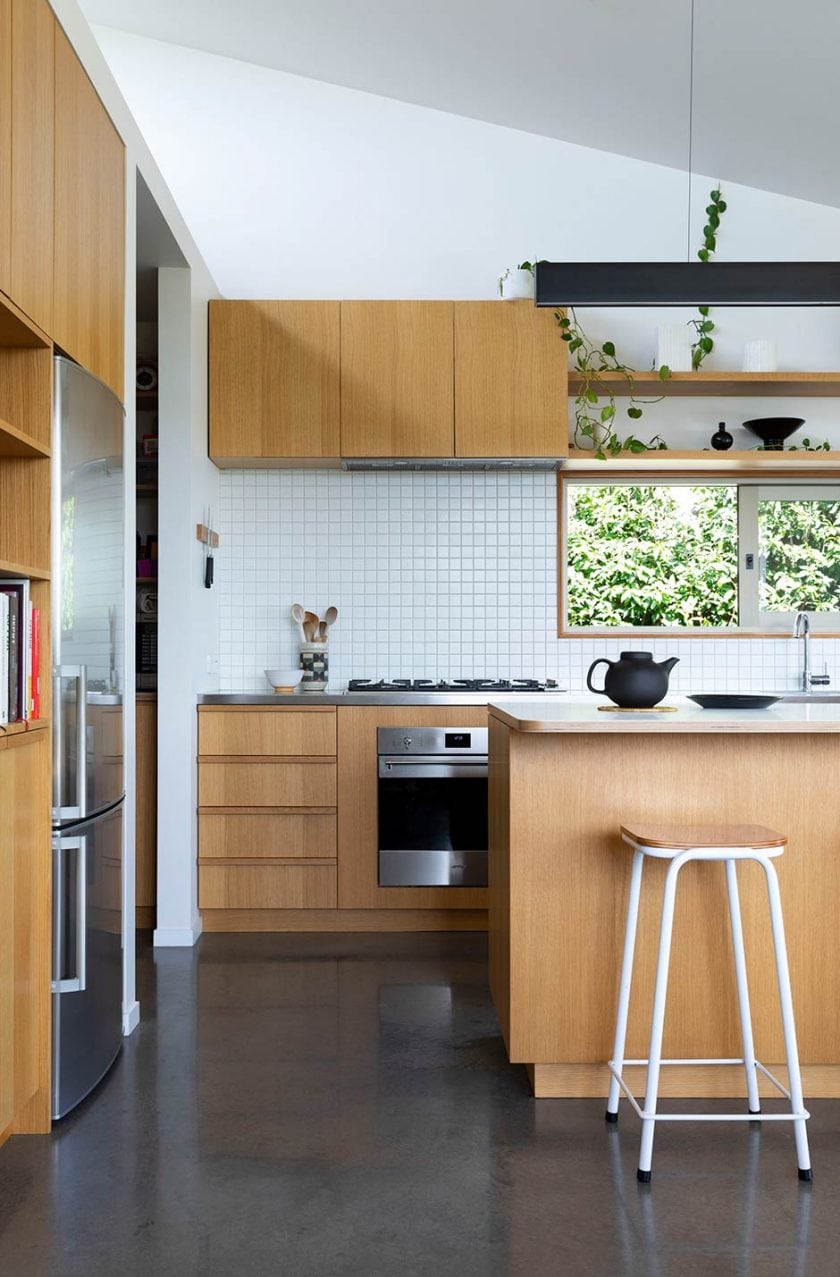 TOP The couple loved working with Luke Mackay of Mackay Construction, who managed the majority of the project. Michael Snookes of Construct designed and fitted the built-in American oak cabinets in the kitchen and bathroom, as well as the window seats, two desks and several areas of shelving. ABOVE In the kitchen, the American oak cabinets meet a stainless steel bench. Some of the décor details here include a light by Linetec over the island, an Olio teapot by Barber Osgerby x Royal Doulton and stools from Flotsam & Jetsam.

Was this your and Stuart’s first build? We’d extensively renovated our home in Auckland, but this was our first time building from scratch. It was thrilling to think we could give each room a purpose and orientation based on the way we wanted to live, rather than the house defining the living. Once we’d pinned down the key spaces, the focus was on framing the views.

You worked with architectural designer Tane Cox on the plan — how did that come about? Stuart works near Tane’s office in Hamilton and by chance wandered past during a lunchbreak and popped in for a chat. They immediately got on, so we subsequently visited some of Tane’s recent local projects in Tamahere and Raglan, which confirmed his expertise in the material palette we wanted: cedar, steel and concrete. His designs were elegant, modest and sat beautifully in rural environments.

How did you feel when he presented his design for your site? Delighted. It was important to us to work collaboratively as the design evolved. We had a detailed brief and a good idea of how we wanted a few key elements of the house to function. When Tane showed us his concept, we were so happy because it was clear he’d listened carefully to what we wanted. He also surprised us with clever ways of enhancing the design with some Tane tricks. 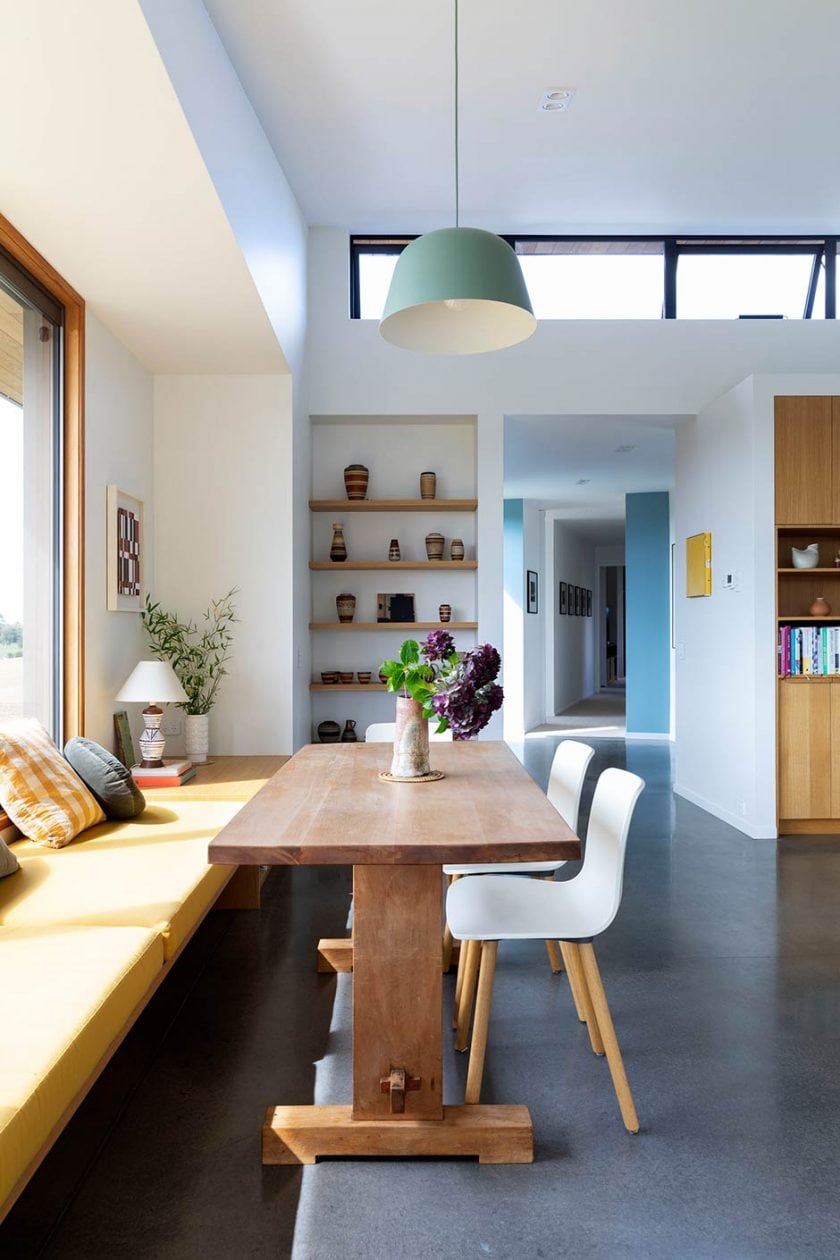 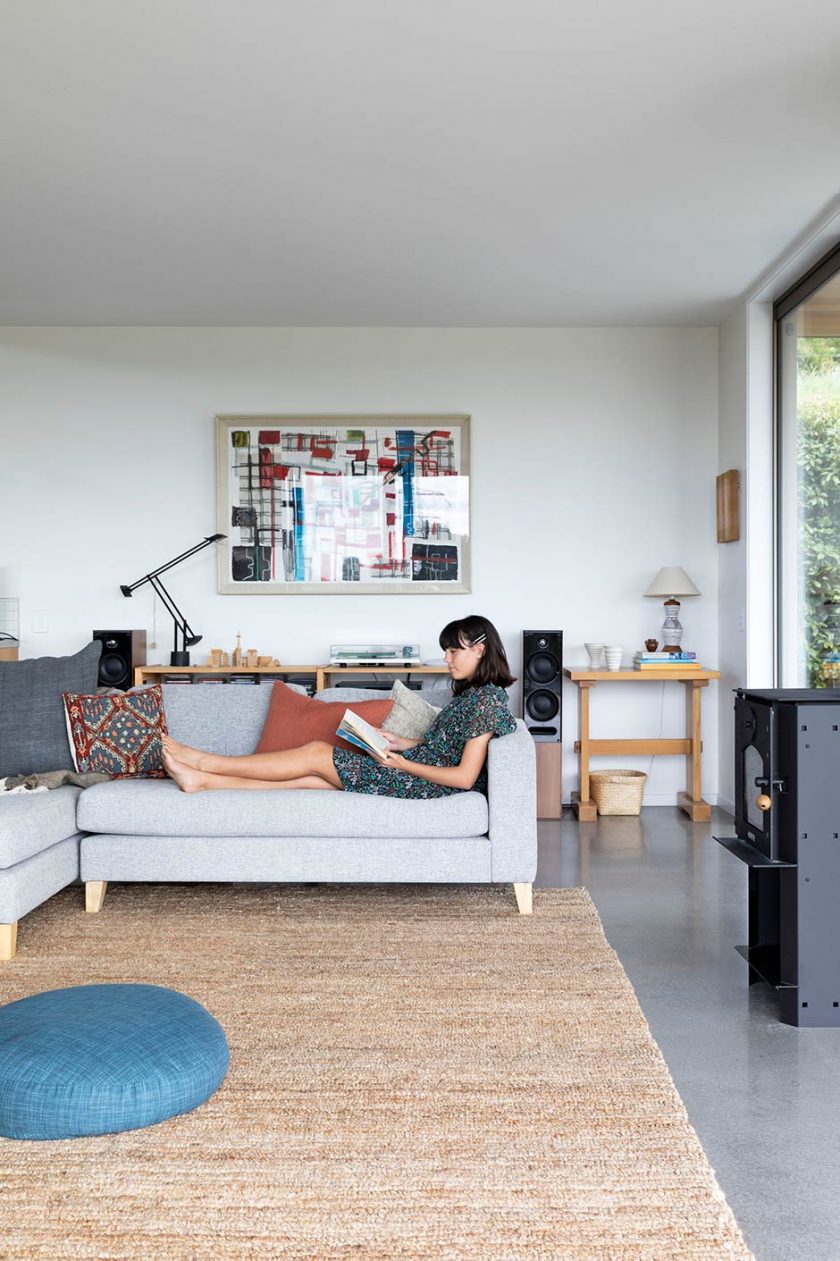 TOP Miriam says her and Stuart’s most-loved feature in the house is the windows. “The views from the main living area and main bedroom never fail to amaze us.” Positioned to make the most of that is a dining table by James Hacksaw; the Ambit pendant light above it is by Muuto. ABOVE On this wall behind Georgia (in Dulux Cardrona, the predominant shade throughout the home) is Renovation at Silverdale by Julian Dashper. Taking advantage of its thermal properties, the couple chose burnished concrete for the flooring in the main living space and bathrooms, then used wool carpet for the second living area and bedrooms.

So what’s the house like? It’s a long, single-level house that sits within the contours of the land. We wanted to reference the meaning of Mangapiko — ‘winding stream’ — and acknowledge it in the plan and views from each room.
The home is angled gently into a sloping paddock running east to west. The roofline folds in places, from subtle corners to a more dramatic pitch up to a wide clerestory window. The entry is in the middle of the plan. Turning left from the front door takes you into a large communal space containing the kitchen, dining and lounge, and opening onto a verandah. Turning right takes you to our bedrooms, bathrooms and a second, more relaxed, living room, where people can watch television if they want to. A wall of books lives in this room as well. 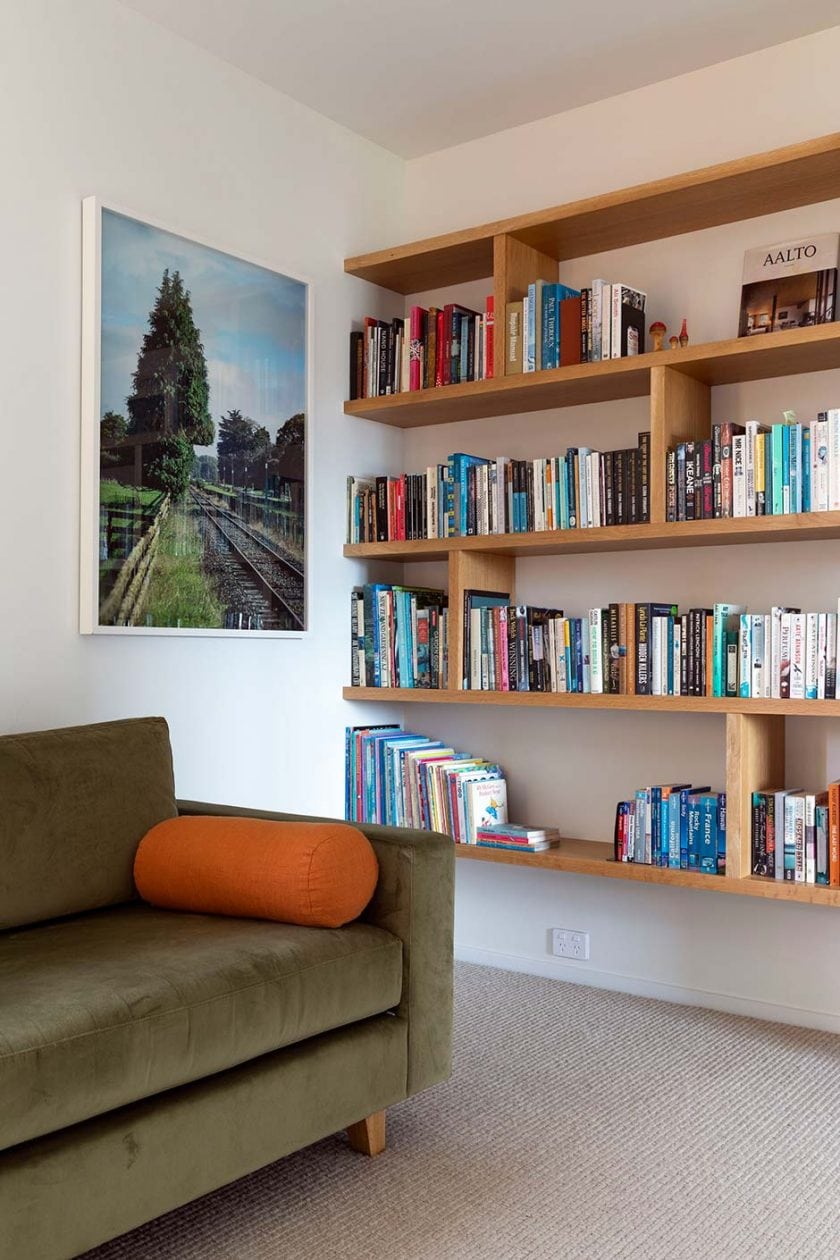 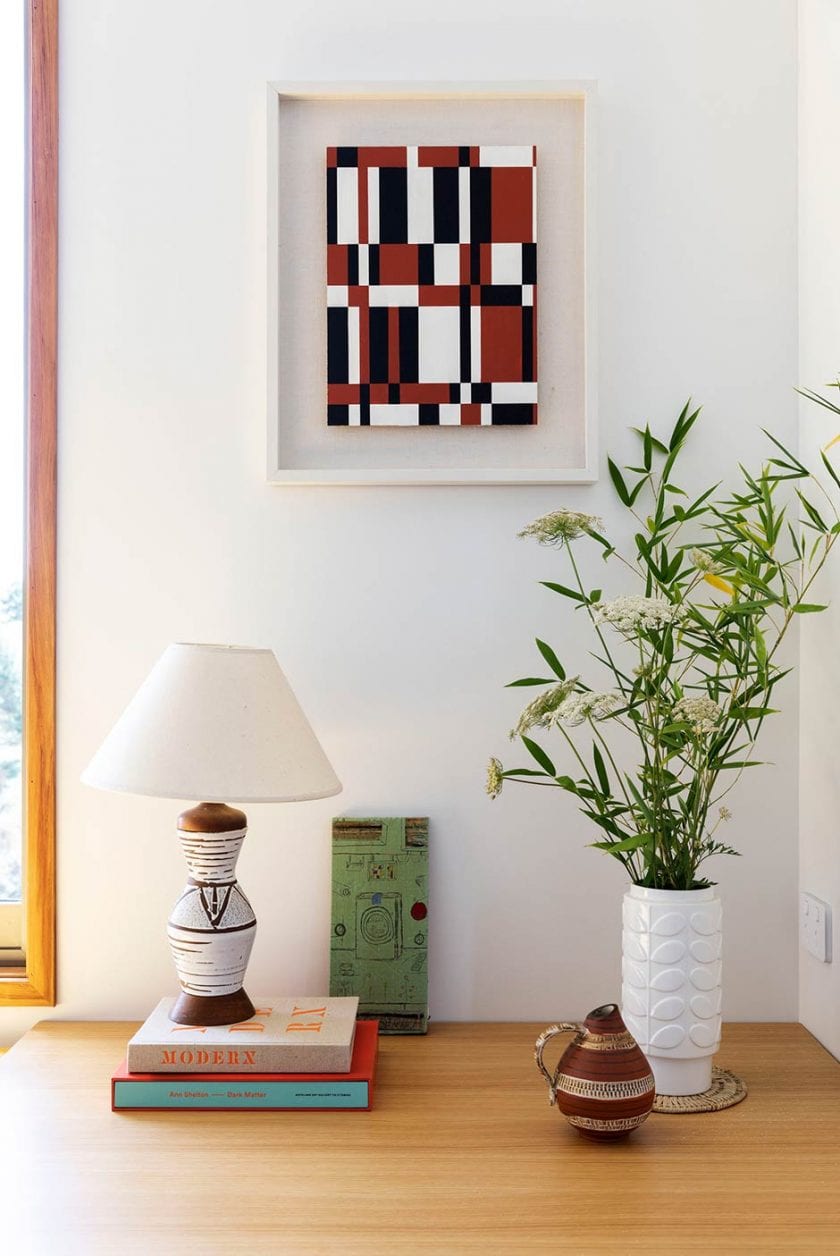 TOP “Right from the concept stage, we were looking for built-in shelving to be a feature throughout the house for our books and collected objects,” says Miriam. Beside this bookshelf in the second living area is a photograph by Mark Smith, Main Trunk Line, which was taken near Cambridge. The sofa from Forma is enhanced by a block-coloured bolster from Città. ABOVE This vignette in the dining room includes artwork by Richard Thompson (on the wall) and James Hogan (leaning below it), a West German lamp and jug, and a vase by Orla Kiely.

You’ve got some pretty special art too — have you been collecting for long? We’re lucky enough to be custodians of pieces from our family art collection and have added to them over the years. Recent acquisitions include a large photograph by the wonderful Ann Shelton from her A Lovers’ Herbal show, a painting by Ed Bats and a small textile work by Rachel Hope Peary.
While the house was being designed, we were constantly thinking about wall space and where certain pieces would sit. We actually replaced windows with walls in some places to make more room for paintings. It all came together the day we hung the art.

Your ceramics are beautiful as well — do you have a particular passion for certain objects? I suffer a shocking addiction to West German pottery. There was a huge amount created when the German pottery industry was rebuilt after the defeat of Nazi Germany, so there are endless shapes and patterns to seek out. It’s a terrible affliction and I need to stop. Our shelves are heaving. 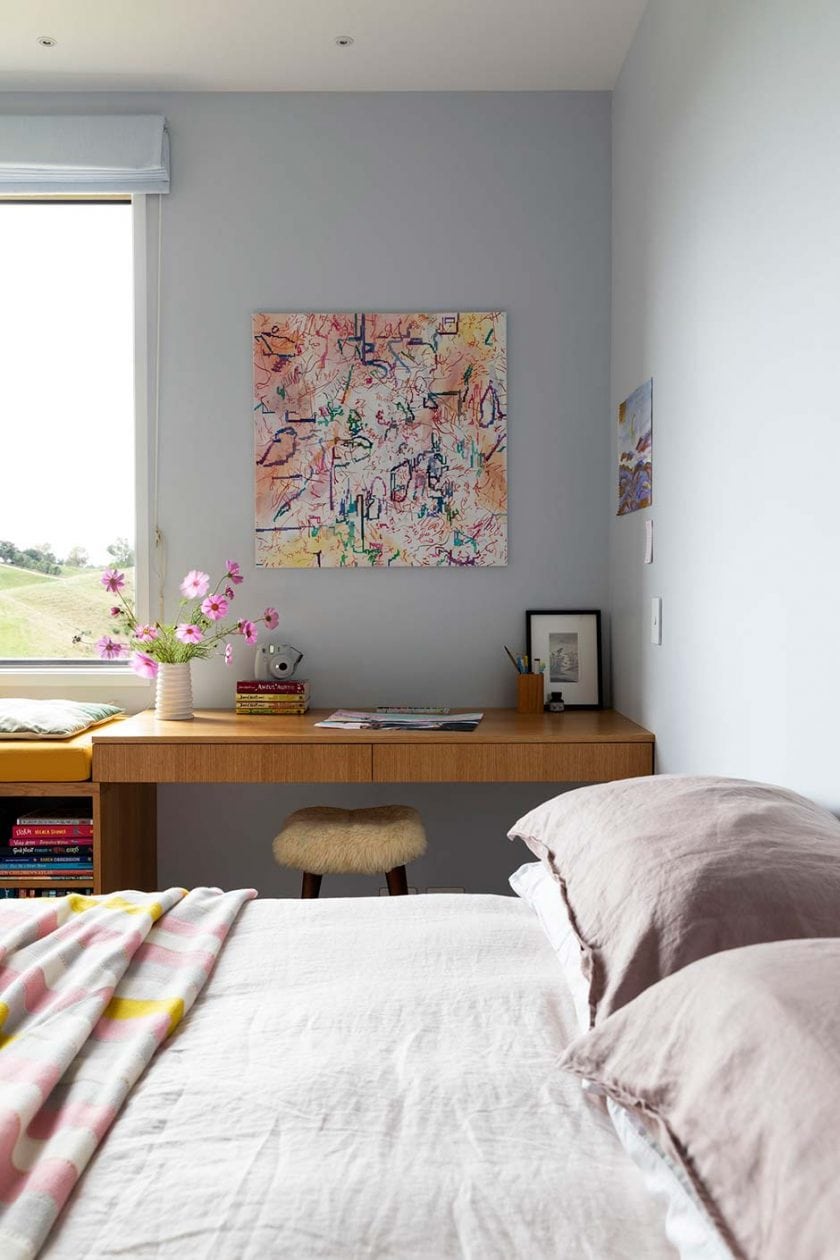 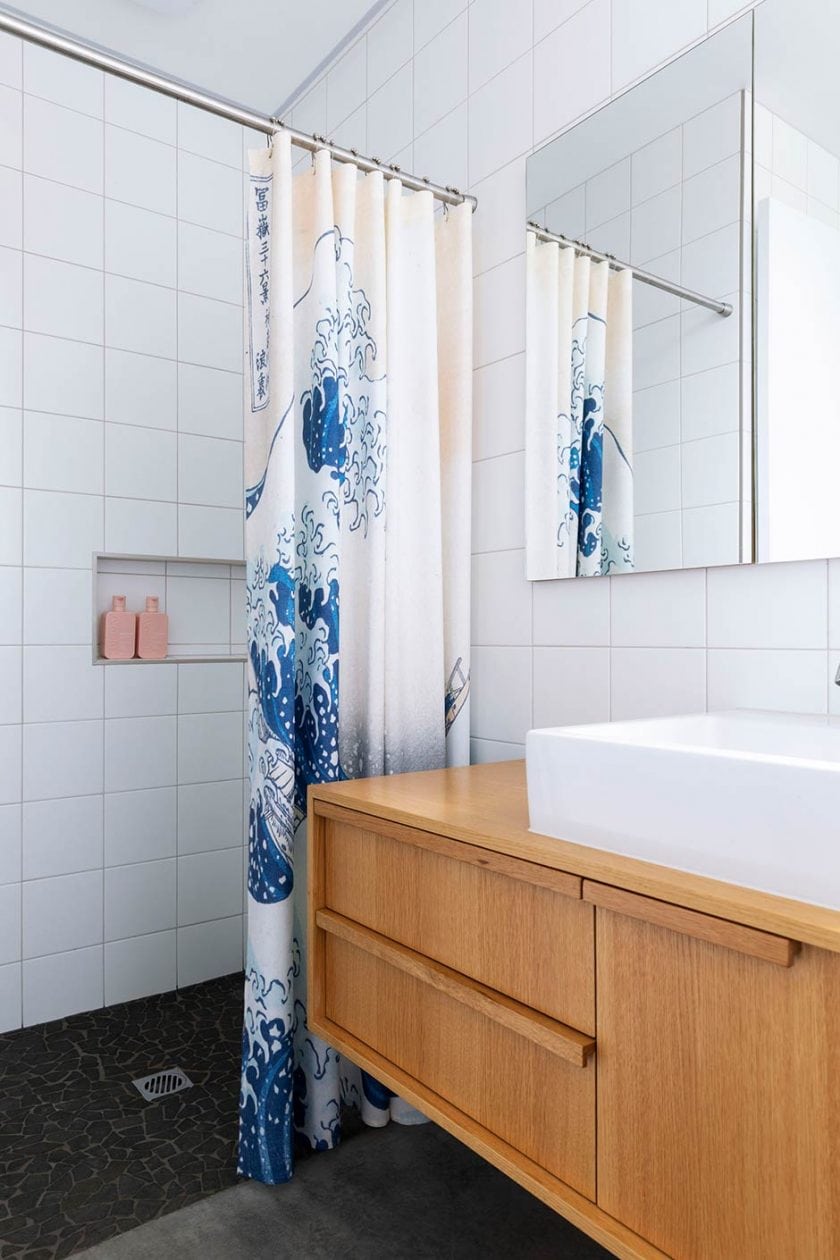 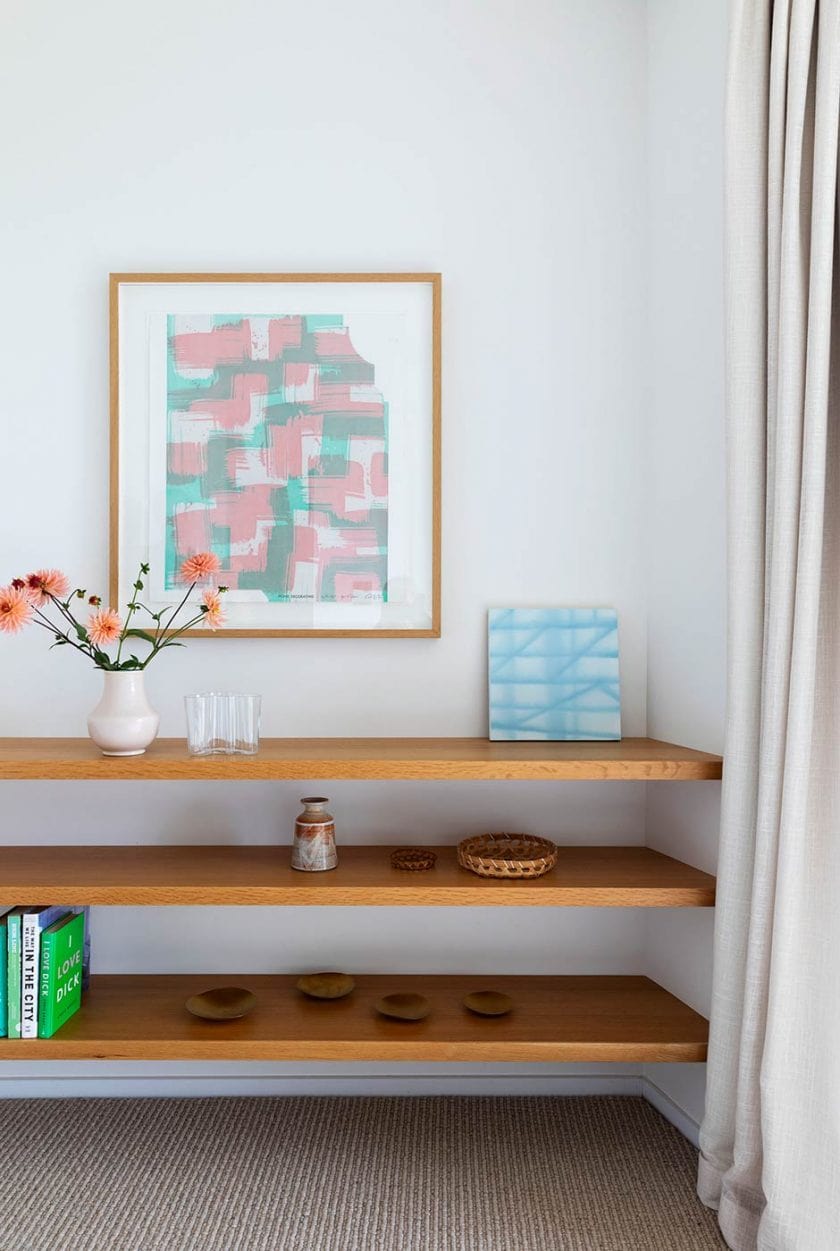 TOP For Georgia’s room, the team designed a window seat below a large sliding window to give her wide-open views to the northwest. It connects to a desk, above which is an artwork by Sue Novell. MIDDLE The kids’ bathroom is beautified by a shower curtain featuring The Great Wave by late Japanese artist Katsushika Hokusai. ABOVE A vase filled with fresh dahlias is a heartfelt touch in the main bedroom — they were grown in the garden outside from tubers taken from Miriam’s nan’s plant. The artworks here are by Rodney Fumpston (left) and Leigh Martin, and some of the other items include (from top) a glass Aalto vase from Iittala, basket dishes found at an op shop and a set of Form bowls by Tom Dixon.

You’re happily living in the house now, but are there any ongoing projects, inside or out? The landscaping will keep us busy for the rest of our lives! We’re tackling it in zones. First was the herb garden, because life without large amounts of Italian parsley isn’t worth living. Last year, we sowed a spectacular wildflower meadow, which is something I’d always wanted to do, but that Auckland life would never allow. Work continues on the native revegetation of the steep slope below the north side of the house and there are big trees to plant. It’s exciting to think what it’ll all become. 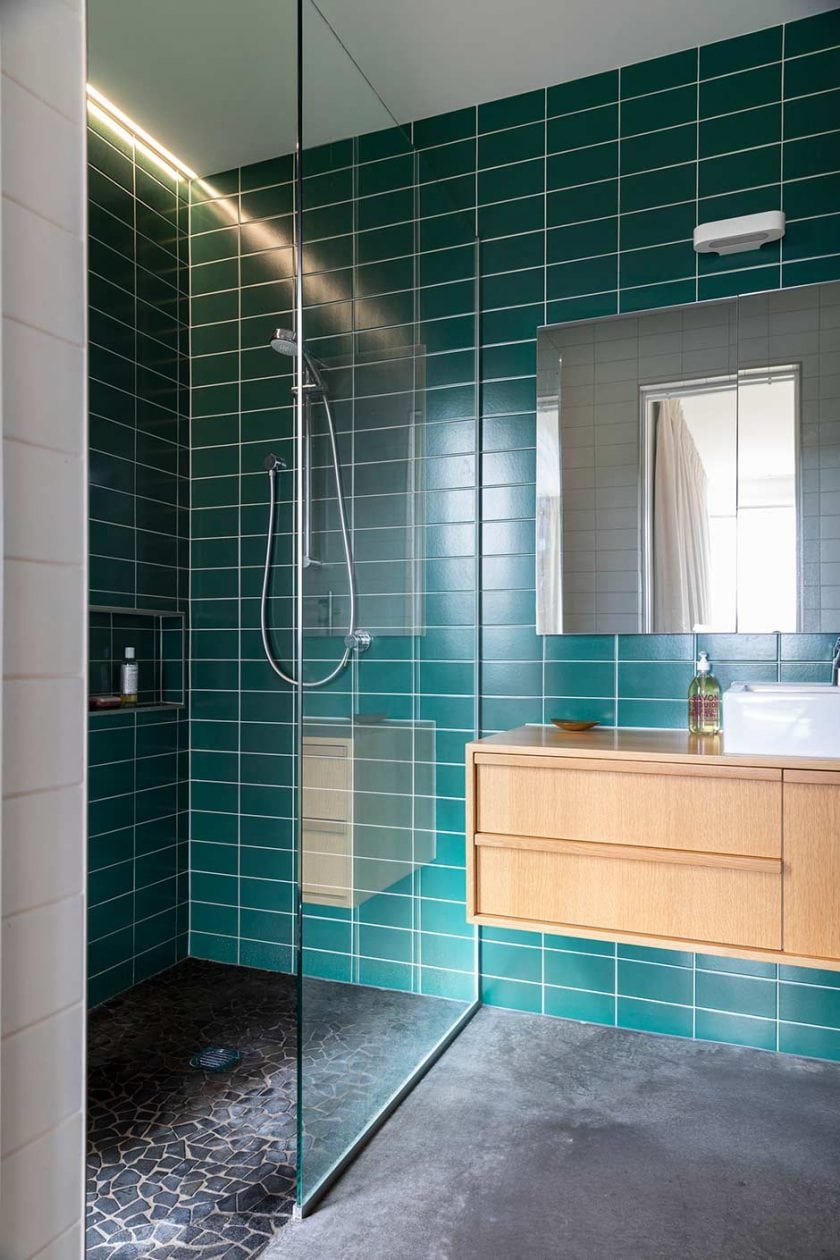 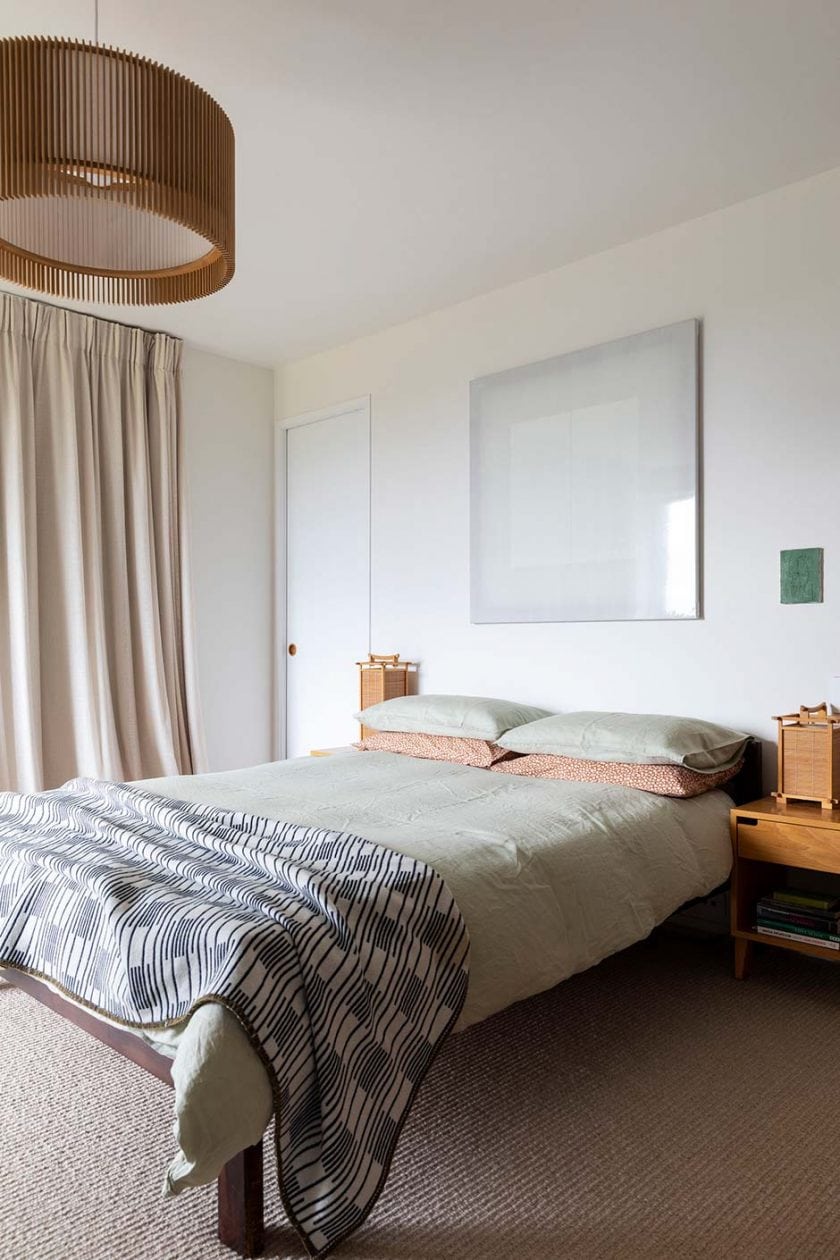 TOP The couple’s ensuite is a dreamy blend of materials that echoes the world outside, a view of which can be soaked up from the shower through a full-length window. They chose green tiles so it’d feel calming. “The idea was for it to be like a forest cave,” says Miriam. ABOVE Behind the couple’s bed (with linen from Bed Threads and Città, plus a blanket by Eleanor Pritchard) hangs a large-scale artwork by Dion Workman. Their bedside lamps are from Japan, the iO pendant light is by Maker and the carpet is Foss by Bremworth.

What are your and Stuart’s favourite times of the day here, and where do you enjoy them? Sunrise from the window seat, sunset on the verandah with a negroni in hand, and Sunday mornings in bed watching the hawks fly past.

How does the pace of life here compare to what came before? There’s a softness here. We live busy lives, but there just seems to be more time now. We laugh that we treat trips to Auckland as we would have visits to Melbourne in the past. It’s wonderful to go there for a weekend, catch up with friends, eat some good food and hit the shops, but by Sunday we can’t wait to come home.