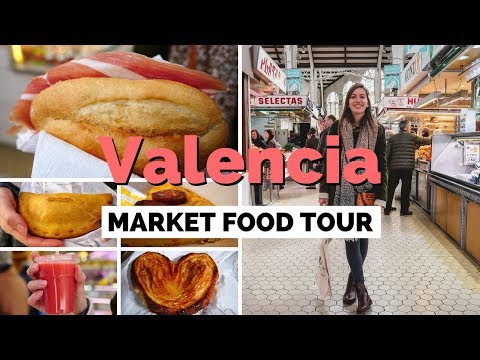 Join us for a Spanish Food Tour in Valencia, Spain at central market (mercado central) as we sample many tasty savory and sweet bites. Located just a stone throw away from our apartment we visited the mercat central on an almost daily basis to pick-up groceries such as fresh produce and delicious local meats and cheeses. However, our mission was different this time. Our plan was to visit the Central Market in Valencia to have as many tasty Spanish snacks as we possibly could handle including both savory and sweet items. With this in mind we ate the following food items:

Today’s video is going to be a food adventure. We’re making our way over to the Central Market here in Valencia (Mercado Central de Valencia). Which is right outside our door. We had views from our apartment window overlooking the market just footsteps away. We’ve already been a few times to do our grocery shopping but we also noticed they have lots of tasty bites so you can actually turn your visit into a meal. So that is what we’re planning to do. I’ve even got my little grocery bag in case we see something for dinner. That is the plan. Let’s go eat Spanish food.

Our first snack of the day is going to be a sandwich filled with jamón serrano (Bocadillo de jamón serrano). That means ham from the mountains from the sierras. I’m just opening it up here. Look at that. A thing of beauty in the sandwich. They asked me if I wanted olive oil drizzled all over it so I was like yeah! It was only 1 Euro.

This is our third snack right here. It is called empanadilla and it is filled with tuna and onion (Empanadilla de atún y cebolla ). It kind of resembles the empanadas that you find in Latin America. How much was it? 1.10 Euros.

We’re going to be trying the tortilla and we ordered the one with chorizo and it is served with a slice of bread and they also gave us some allioli sauce.

So this should be pretty good & scrumptious. Our forth snack. We’re still going strong guys. Not close to being full yet.

Time to try that. You already had a bite of the chorizo for our Spanish version so I’m insisting that you save that piece for me. I know it is good. It is wonderful with this garlic sauce.

We are trying something completely new. Apparently it is a dessert that is from Spain. We got three different kinds and I’ve just opened the first one up. This one is called polvorones de canela. It is cinnamon.

This one is called Mantecada. This is polvorone.
These were three Euros for the 3 of them.

Moving on to dessert. This is called Palmera. It is 1 Euro.

Gotta wash it down with a little fruit juice. This was 1.50 Euros.