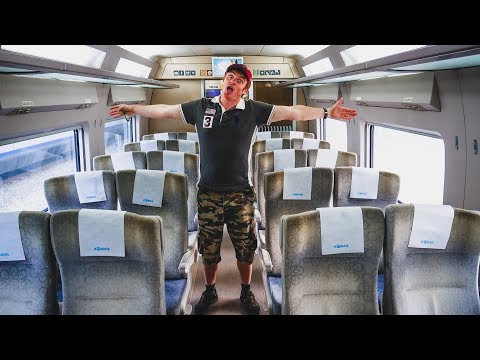 Come join us for a Seoul to Busan KTX train ride as we continue our adventures in Korea by taking a high-speed Korean train crossing the country and then having a delicious Korean breakfast upon arrival.

Waking up bright and early we headed over to Seoul station arriving shortly after 5 am. We grabbed a gimbap Korean breakfast on the street (Korean rice rolls) before heading into the station. The KTX high speed Korean train from Seoul to Busan takes anwhere between 2 hours and 20 minutes to just under 3 hours to arrive depending on the amount of stops made.

Korean trains are extremely punctual so arriving on time is important. The economy class is spacious, clean and perfect for either sleeping or catching up on a bit of work with your laptop. You can charge your electronics and there is free wifi as well as storage for your luggage.

The scenery along the way was fascinating as we passed by big cities such as Daejeon and Daegu but spent most of the time going by rice fields, mountains and forests. It was a very scenic journey.

For breakfast in Busan we grabbed bibimbap and hopak juk (Korean mixed rice and Korean pumpkin porridge). It was a delicious Korean breakfast and a great way to kick things off in Busan, Korea.